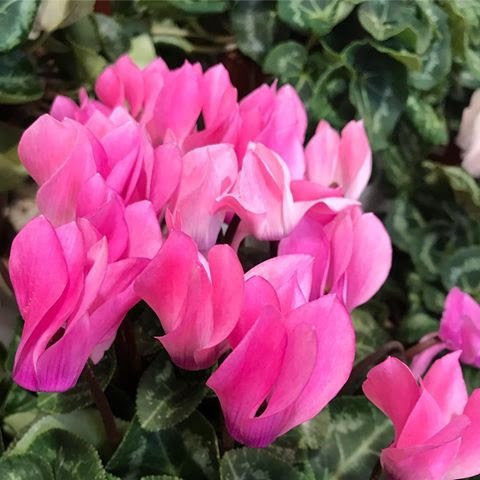 Listen to the Cyclamen Podcast Here!

Allow the pot to become light again when lifted, using the bottom-up method of irrigation. Place the plant on a saucer one water around a quarter deep until thorough absorption. Repeat this step twice a week if needs be, especially with those grown in bright, warm locations. Splashing the foliage each time you come to water the plant will immediately allow excess moisture to sit in the cubbyholes, causing grey mould to develop. If the bulb becomes mushy, it's game over. As Cyclamen go dormant during the spring and summer, be sure to reduce irrigations further to reinforce this vital period. Either buy some bottled water from a convenience store or allow tap water to sit for around 24hrs before application to alleviate high levels of fluoride found in the tap. Under-watering symptoms include stunted growth, no flowering and crispy or yellow leaves; these issues are usually due to either too much heat/light or forgetfulness. Over-watering symptoms include mushy undergrowth, rotting flowers or leaves, and root or tuber rot. Click on the link below for more information about how to address these issues.

Average room humidity is more than enough to occupy a Cyclamen, as too high humidity and poor air circulation will result in powdery mildew. Botrytis petal blight is caused when excess moisture settles on the flowers' intricate bodies, harbouring detrimental bacteria to thrive.

Whilst the plant is in bloom, maintain bright, indirect light for quality growth. Never situate it in excessively dark locations due to the heightened chance of root or tuber rot. If it's too dark for a newspaper to be read, it'll be too shady for the plant, too. An hour or two or winter sunlight is highly beneficial for a Cyclamen as long as it's regularly checked for drying soil.

Once all of the foliage and flowers die back, usually at the end of winter, keep the potted tubers in a dark, cool location until new leaves re-appear in early August. If the plant still has its foliage during this time, keep the plant situated in a bright, indirect location with no direct sun. It's important to maintain dry soil during this period, as the plant won't be soaking up as much moisture, which in turn will result in rot.

During the budding and flowering period, supplement using a potassium-based feed to prolong blooms. Once died back, reduce the fertilisations to every four to eight weeks using a general plant feed at half of the recommended strength. Have a look at the table below to learn about when your Cyclamen's flowering and dormancy period will occur.

Over-watering is the biggest issue when it comes to an Cyclamen. Typical signs of this include brown leaves with soft spots on the underside of the leaves, basal/crown rot or powdery mildew forming in the centre. Not only do you have to be mindful of root rot, but also have a think about which plant parts to keep dry. Its central crown must also remain dry at all times to prevent the development of basal rot or mildew. Avoid waterlogging; there's no point fulfilling the ukhouseplants' phrase, 'drenches in between droughts' if the base of the pot is submerged, as root rot will arise. For any more information about over-watering related issues, be sure to click on this link.

Too much sunlight will lead to sun scorch, with typical signs including browning or crispy leaves, dry leaf-edges, sunken leaves or stunted growth Although too little light will cause over-watering issues, too much sunlight will negatively affect the plant as well. A location that offers over two hours of sunlight a day will bring the optimum growth for the Cyclamen. If yours has fallen short of this issue, reduce the amount of sunlight considerably and always be mindful of environmental shock (when too locations offer too different growing conditions). Remove some of the affected leaves and increase irrigations slightly. Only hydrate the plant using the bottom-up method.

As mentioned before, powdery mildew and botrytis are major threats among heavy foliaged plants due to the compact nature that aids the spread of the diseases. Watering above the foliage will allow excess moisture to sit in the cubbyholes of the stem, enticing harmful bacteria to thrive. Remove the affected areas and improve the growing conditions by situating the plant in a brighter location with the use of the bottom-up method of irrigation.

Over-supplementing a Cyclamen will bring nothing but grief in the likes of yellowing leaves and weak, dramatic growth. Although a monthly feed is an excellent way to promote healthy growth, the combination of dry soil and sharp chemicals will quickly lead to the burning of roots. The best advice for this issue is to pre-moisten the soil beforehand; not only will this remove the chemical-edge found in fertilisers, but it will also adversely remove the chance of damaging the roots.

To get the most out of your Cyclamen, a sufficient dormancy period must be served after flowering to promote a showy bloom for the following year. Although most will go through this period during the spring to avoid drying from the Mediterranean summer, some will serve this period during the winter. Once the last set of flowers have elapsed, the foliage will begin to yellow and drop off in succession. Although the plant won't look overly impressive during its decline, avoid snipping of the remaining leaves as nutrients will still be being processed through the foliage. Once you're left with a bare tuber, re-hydrate once most of the soil dries out to keep it just 'ticking over'. Never over-water the tuber during this period as too soggy soil for extended periods will result in root or tuber rot. Some Cyclamen will hold their leaves throughout the year, and if this is the case, provide a location that offers no direct sunlight and temperatures above 7°C  (50°F)  to aid a better bloom later in the year. 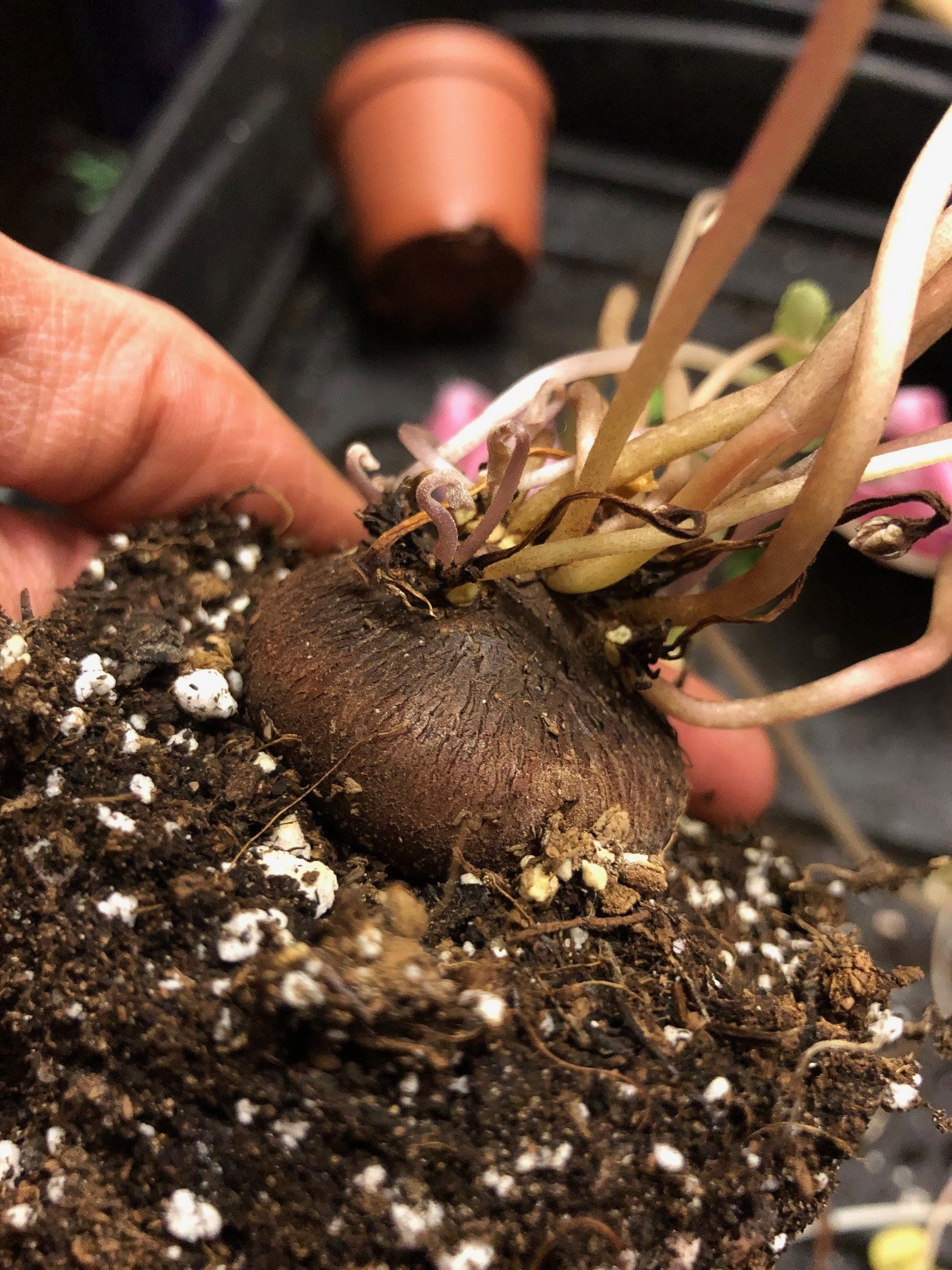 A Cyclamen tuber which will need the foliar & flower stalks to be removed before its dormancy. Also, this is how shallow you'd ideally want to plant it in the soil, for the prevention of rot.

During storage, situate the potted tuber in a dark, dryish setting that offers good air circulation and temperatures over 8°C  (46°F).  A frost-free shed or somewhere with a small amount of light is an excellent setting for the Cyclamen during the this time. After around seven months, small petioles holding the leaves will emerge above the soil line, signalling the start of the new season. At this stage, it's best to re-relocate the Cyclamen in a bright, indirect setting with increased irrigations. After a solid few weeks or foliar growth, supplement the plant using a general plant fertiliser every two weeks, swapping to a potassium-based feed during the blooms.

Cyclamen is a perennial genus consisting of twenty-three species ranging mostly from the Mediterranean. Carl Linnaeus first described the genus back in the mid 18th century and named it after the Greek word for 'circle', kyklā́mīnos, which refers to the circular tubers beneath the soil line.

5°C - 25°C   (41° - 78°F)
H1b - can be grown outdoors in spring and summer in a sheltered location, but is fine to remain indoors. If you decide to bring this houseplant outdoors, do not allow it to endure more than an hour of direct sunlight a day as this will burn the leaves. Regularly keep an eye out for pests.

Via seed or tuber division. To learn about the essentials with sowing seeds, be sure to click on this link - Seed Propagation Tips.

For the latter propagation method, divide the tubers just before the growing period in late spring into individual specimens, all with roots attached. If it doesn't have roots, don't panic - these should develop once the growing period kicks in. While the plant is still leafless, keep the soil evenly moist with the soil drying out halfway before another water.

Although most Cyclamen bloom during the autumn and winter months, many species can flower in other seasons of the year. To simplify when the top ten most popular species bloom, ukhouseplants have created a small list;

Dobbies, British Garden Centres, Some Florists & Online Stores. Specimens are likely to be found from late summer to late early January in most garden centres; it's not advised to bring outdoor plants inside because of environmental shock with the risk of introducing new pests into the home.