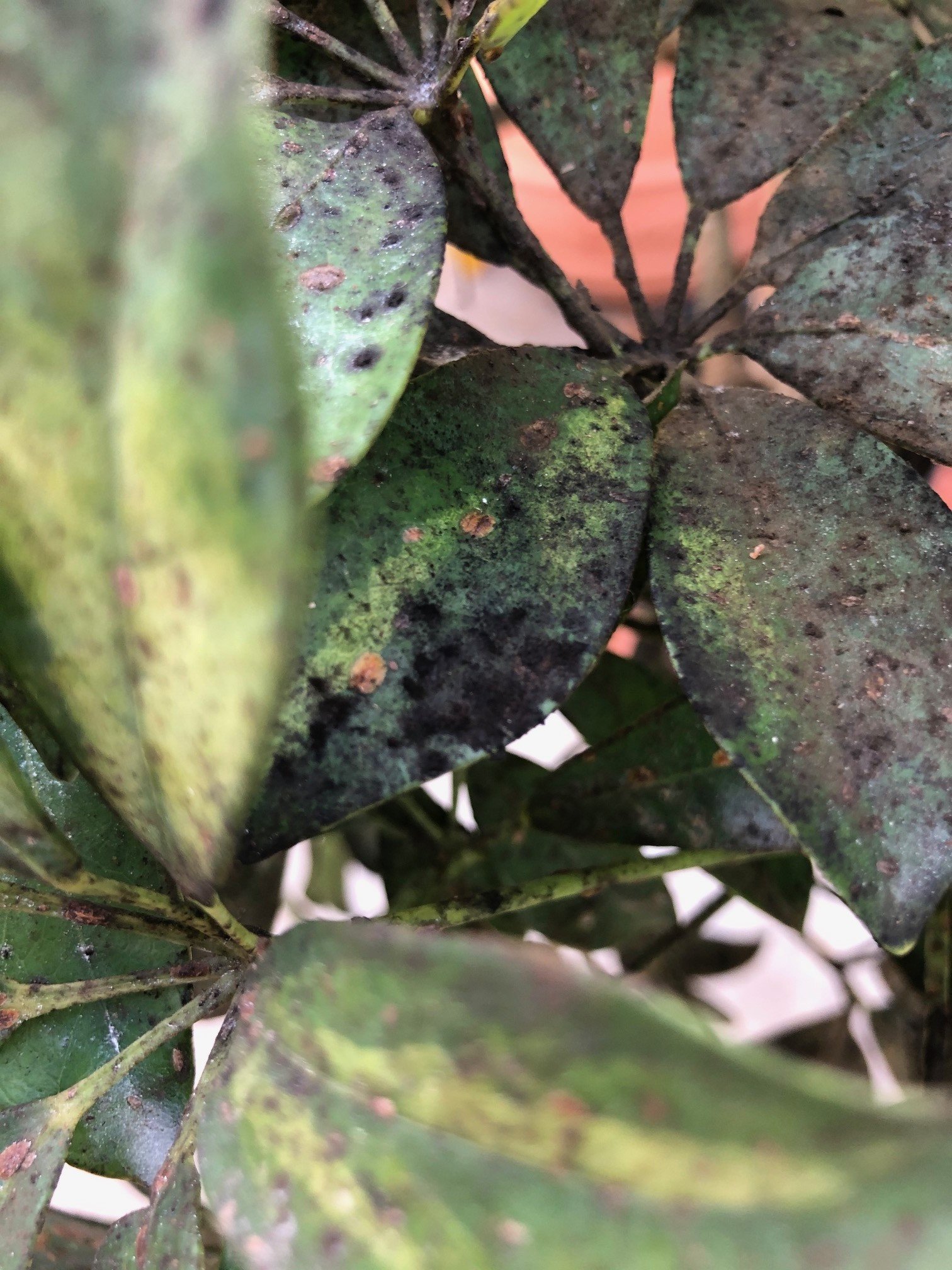 A severe infection of sooty mould, caused by Scale excrement.
Symptoms - Black sticky fungus will form on the honeydew-excrements laid by scale, mealybugs and other pests. Although the mould won't directly affect the plant, untreated areas will cause the leaf's pores to block, resulting in slowed photosynthesis and a weakened specimen.

Causes - Fungi spores will land on the pest-excrements, forming into a widespread attack that can suffocate the foliage. 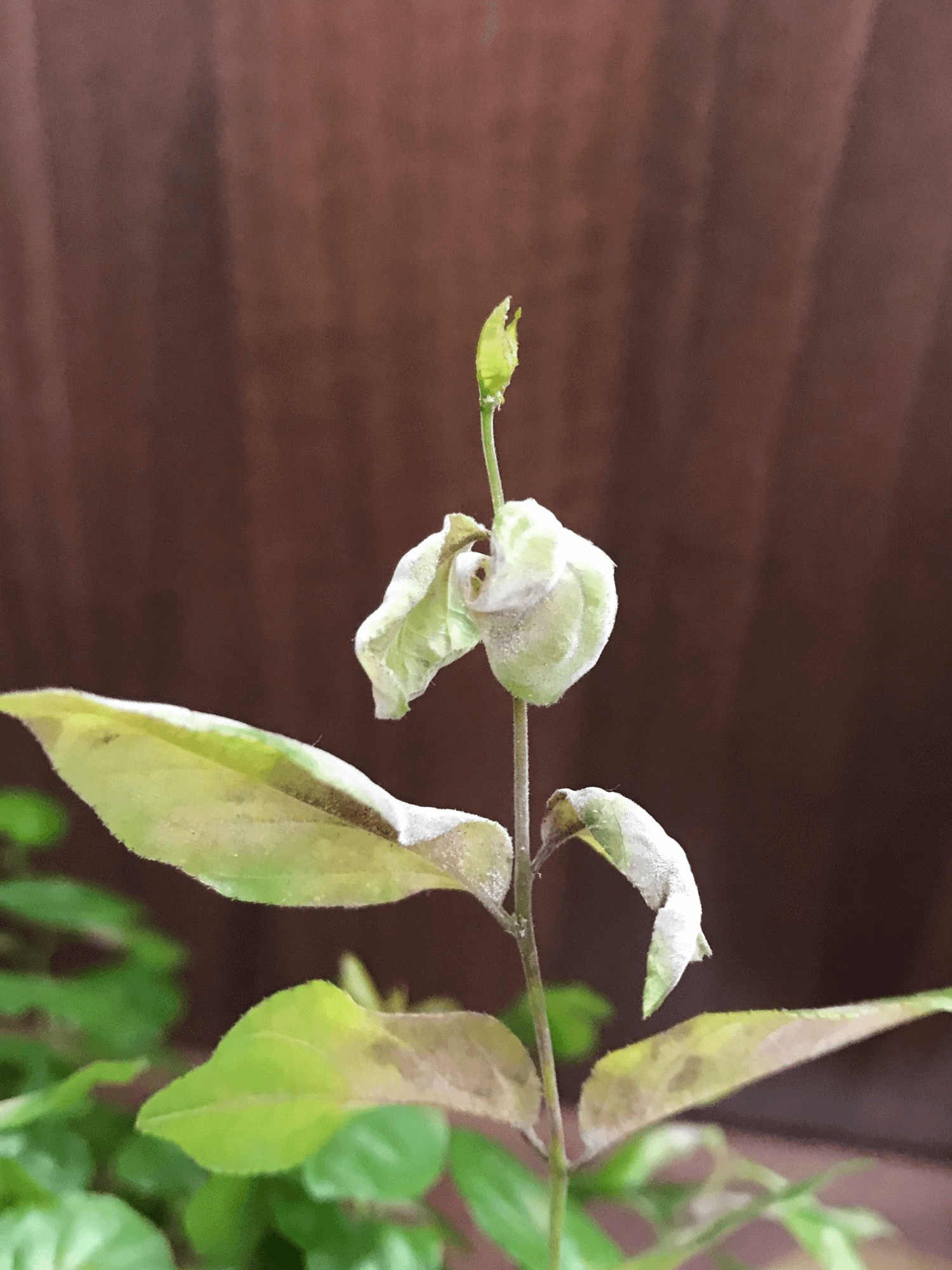 Powdery Mildew attacking the new growth of a Bonsai Tree.

Symptoms - Clear, visible damage attacking the new growth. Symptoms - Mildew is a fine white powder that can affect any plant part above the soil line. More severe cases could allow leaves/stems to become yellow along with stunted new growth. Powdery mildew is most likely to attack dehydrated and/or unfertilised specimens.

Causes - Poor air circulation, high humidity and excess of moisture sitting on the leaves or flowers. 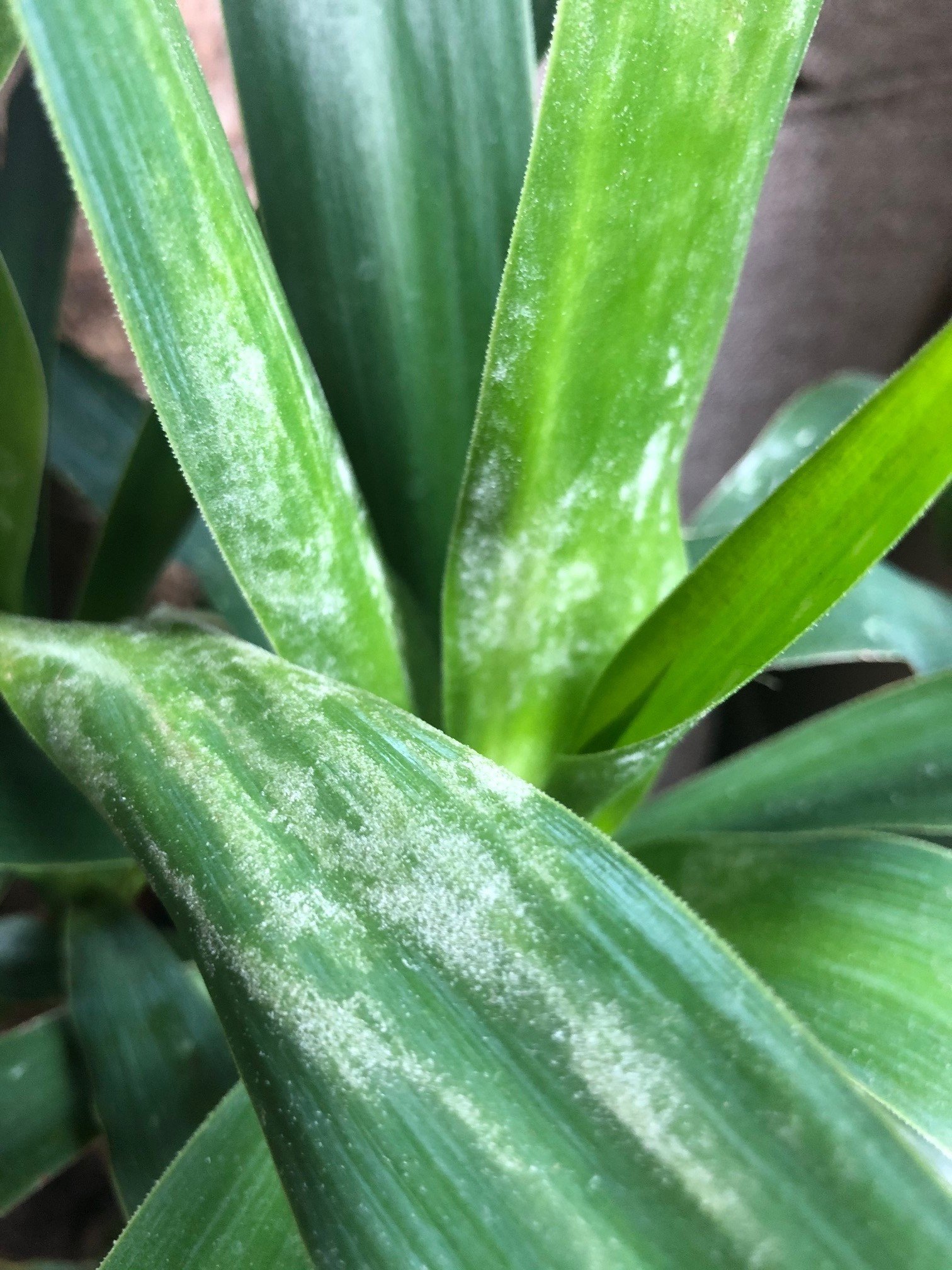 Powdery Mildew attacking the foliage of a Yucca elephantipes. 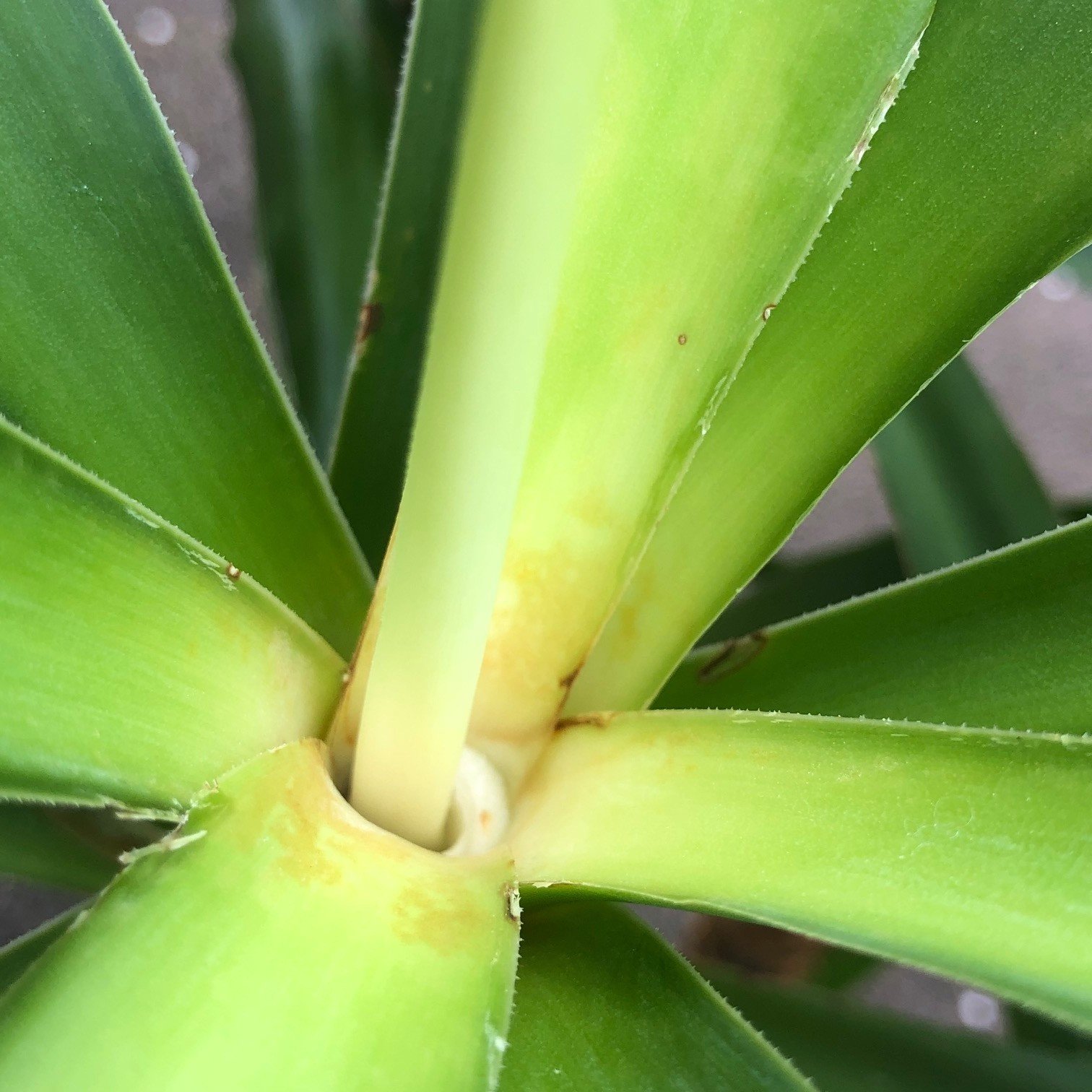 After wiping the foliage to eradicate the mildew, you'll begin to see the extent of the damage. Severe cases will see the curling of leaves and browning leaf-sections

Neem Oil is the best option as it'll work after the first application. Dilute the oil with the appropriate part of water, and finely mist the foliage once a week for the next month. Keep the plant in a dry, bright location away from other specimens until the attack has been eradicated. Wipe down the leaves with a damp cloth when any symptoms arise.

Insecticidal, or Horticultural Soap is the second most used organic remedy on the market, with three versions to choose from. The first option is via purchasing an RTU (ready-to-use) spray bottle, which can be immediately used on the plants. Although most garden centres will stock this, it's far more economical to purchase the second option - concentrated bottles. This method comes with pro's and con's but is far cheaper to use if you have multiple infestations as you'll only have to use a set amount each application.

The last option is making it yourself. There are three ingredients in creating your own soap - a vegetable, tree or nut-based oil, non-fragrant dishwashing soap and tap water. Most oils are acceptable, with the most successful being vegetable, sunflower and olive oil. Add two parts oil, one part dishwashing soap and eight parts water to create the dilution. Spray the dilution wholly around the plant, empathising the hard-hit areas. This method should be performed weekly over the next month, along with regular inspections - as soon as you see a symptom, address it!

Using Milk or Baking Soda is another excellent example of an organic remedy. Mix 1 part of milk/soda with 4 parts water and use a cloth to remove the mildew. Again, provide a dry environment while the plant is recovering and keep the foliage unsaturated at all times. Re-introduce to others once the problem has been dissolved.

For those seeking a healthier option, FungusClear Ultra is a great example. Not only is it widely available at most garden centres, but it's also relatively cheap and can be used on many different forms of fungi. Always read the label and follow the recommended guidelines for application.

Need further advice with a wounded houseplant? Book an advice call with ukhouseplants' friendly and expert writer today to discuss your specimen's symptoms and how to address it!

Symptoms - The rapid loss of lower-leaves accompanied by root or pseudobulb rot. The stated plant parts will initially transition from a creamy yellow colour to a brown mushy appearance after a few weeks. White fungal growth can sometimes also be seen on stems when grown in an overly humid environment with poor air circulation. This disease is within the leaves and therefore, cannot be 'scratched-off'.

Causes - Excess moisture in between the leaves and the plant's body. Poor air circulation, high humidity levels and high temperatures could all accelerate the progression.

Want to buy top quality products with FREE Delivery? Click here to view our new store, including everything from indoor potting mixes to moss pole hooks. 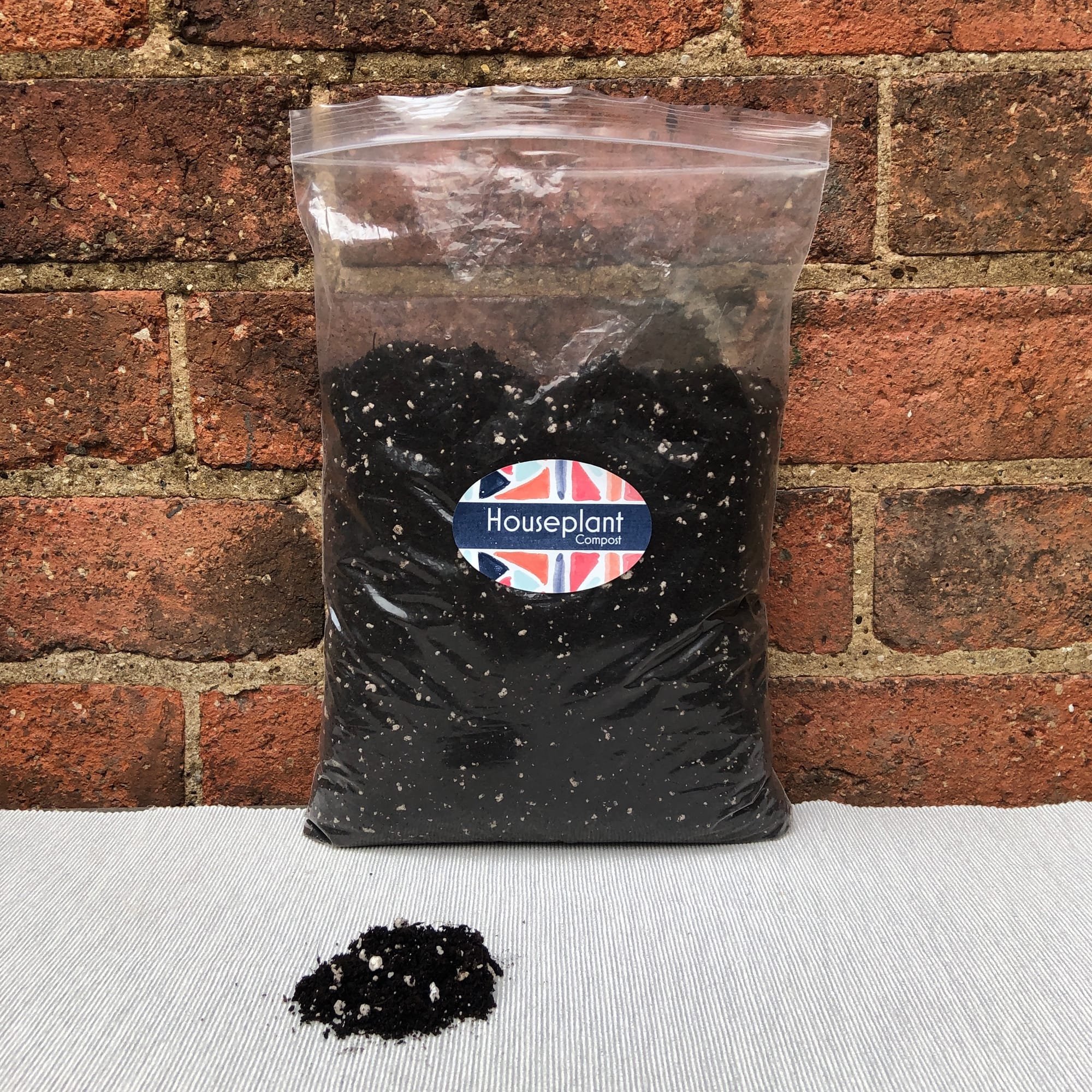 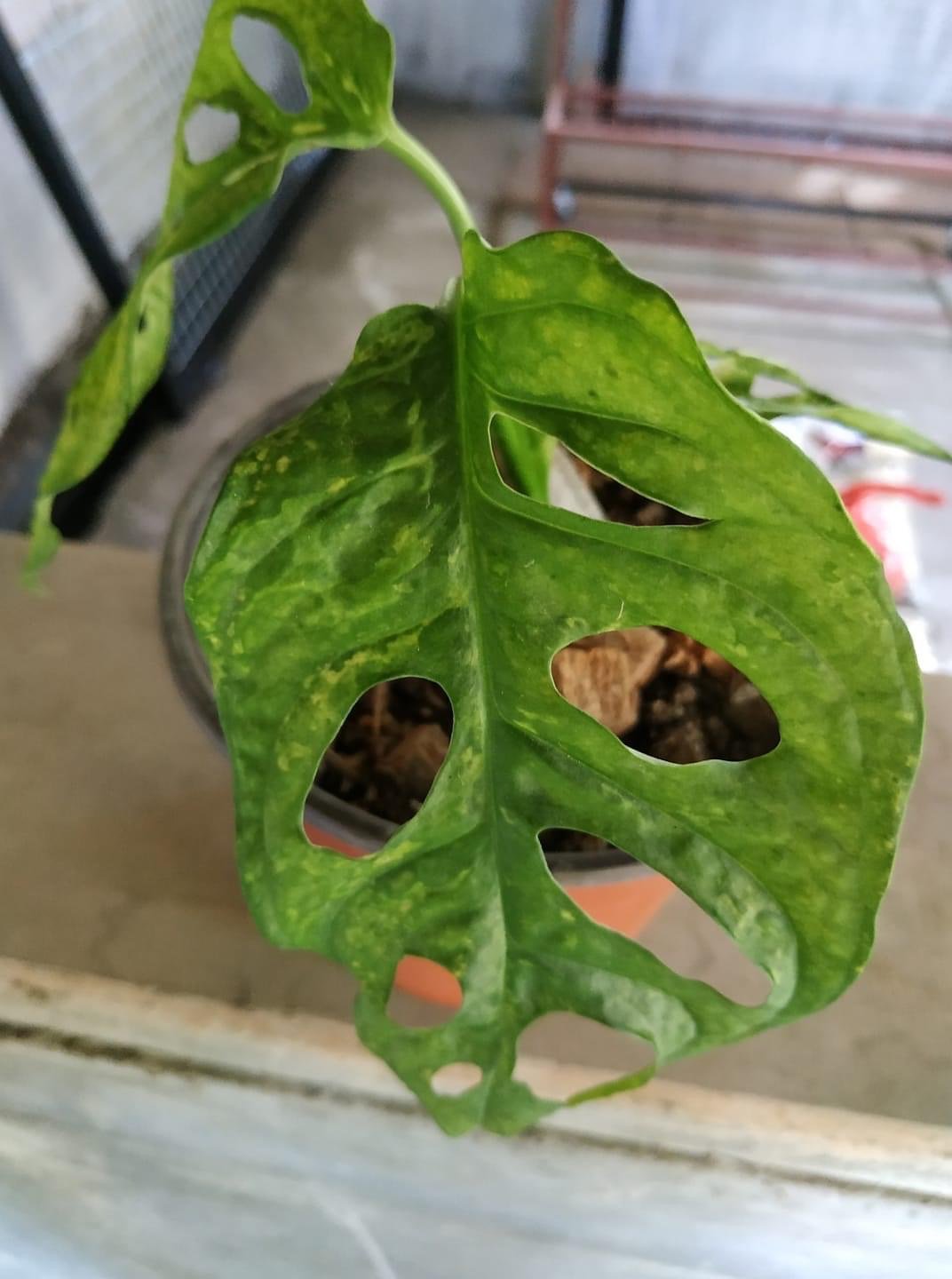 Mosaic Virus can affect Aroids, like Monstera and Philodendrons, & fruits Apples and Cucumbers. Another case of Mosaic Virus on a Philodendron selloum.

Symptoms - This virus is most likely to attack Monstera adansonii & M. obliqua (Monkey-Mask Plants), causing small, yellow lesions or patterns to on the leaves. At first, symptoms look similar to a nutrient deficiency or over-exposure to the sunlight, but as conditions worsen, you'll eventually find colonies of deeper affected areas.

Causes - The virus is usually pre-existent within the plant's cellular make-up, but some cases may arise from neighbouring plants. Other reasons include the multi-use of pruning scissors without being washed in between utilisation, re-using old potting mix, and pests that may spread from plant to plant, thus taking the virus with them. 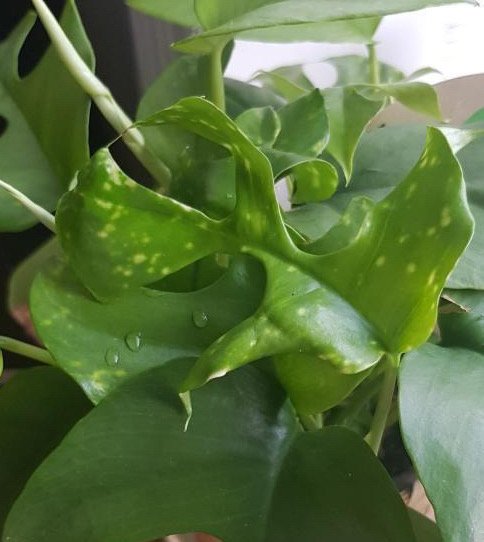 A final case of the virus on a Monstera adansonii. 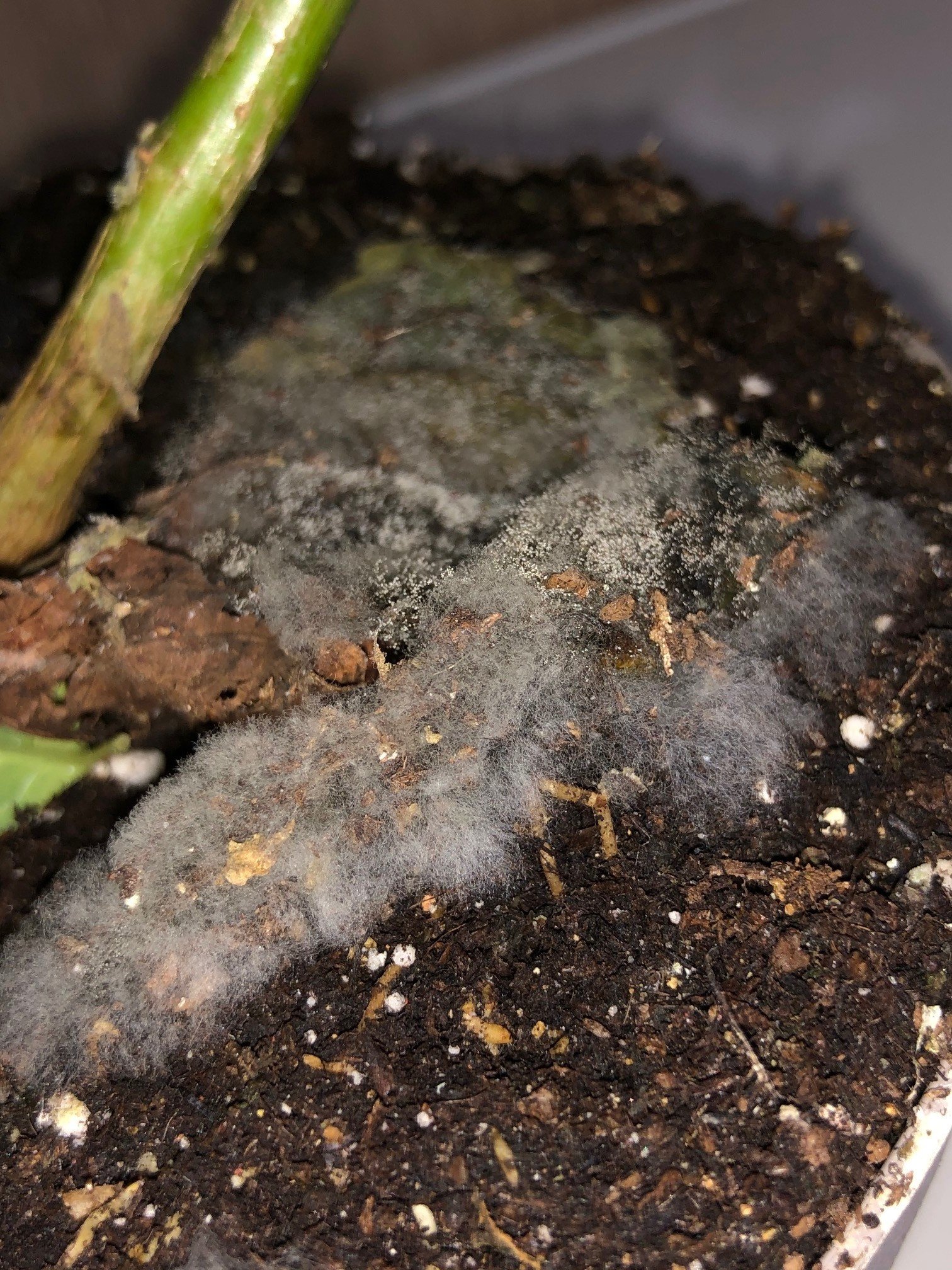 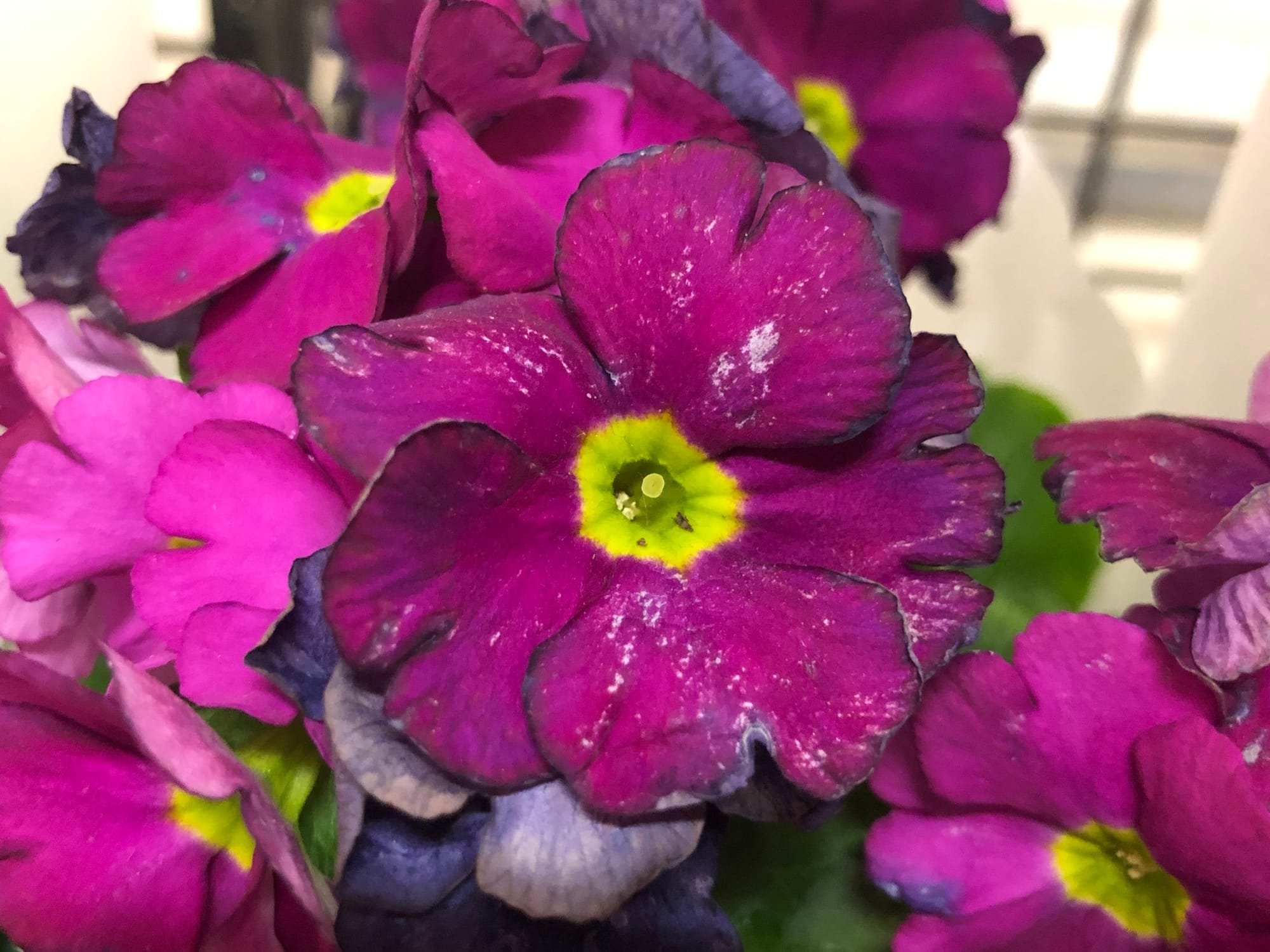 Causes - An excess of moisture on, and around the flowers or foliage. Poor air circulation, high humidity levels and dark locations may accelerate symptoms. 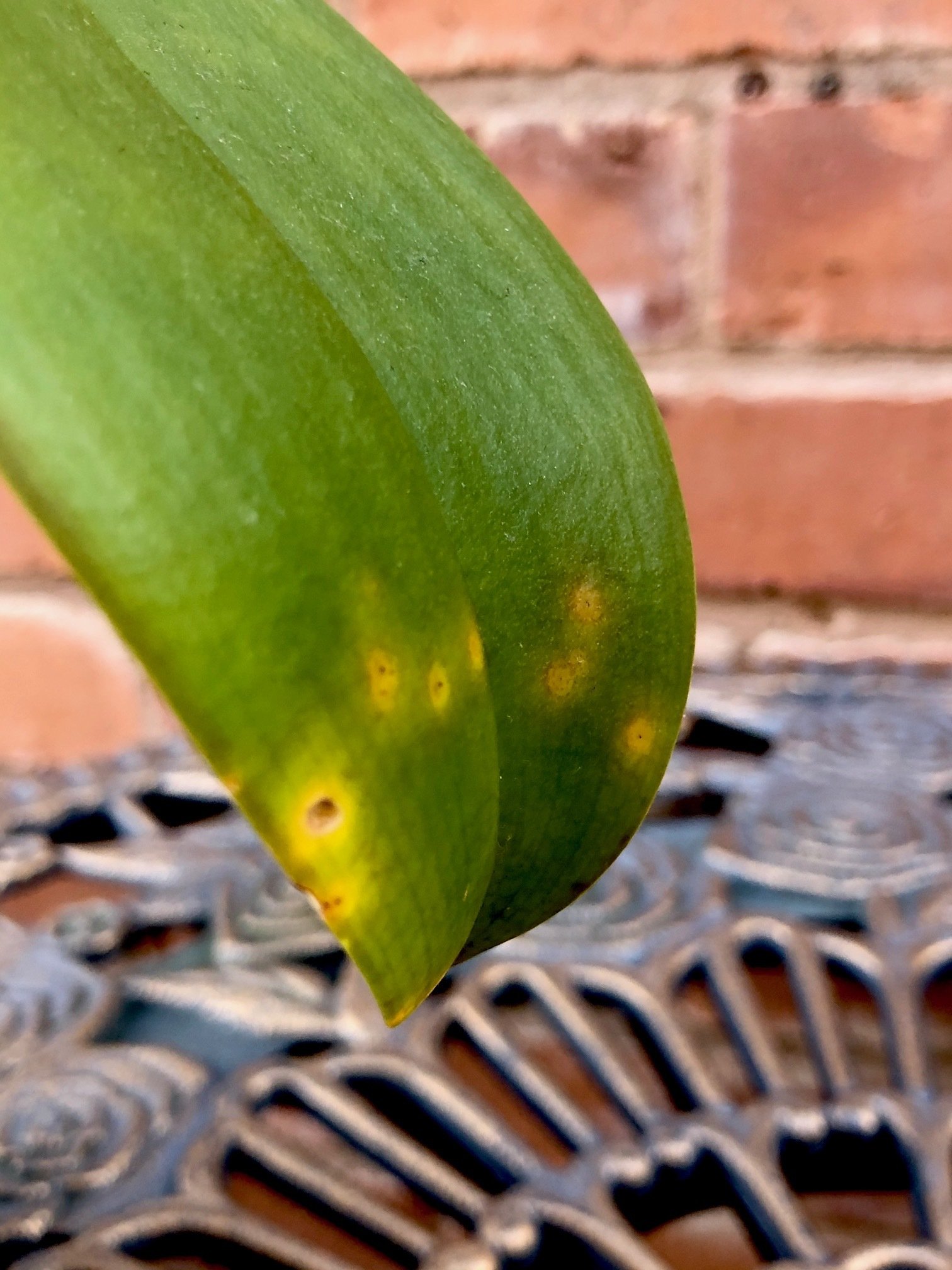 Phyllosticta on a Moth Orchid 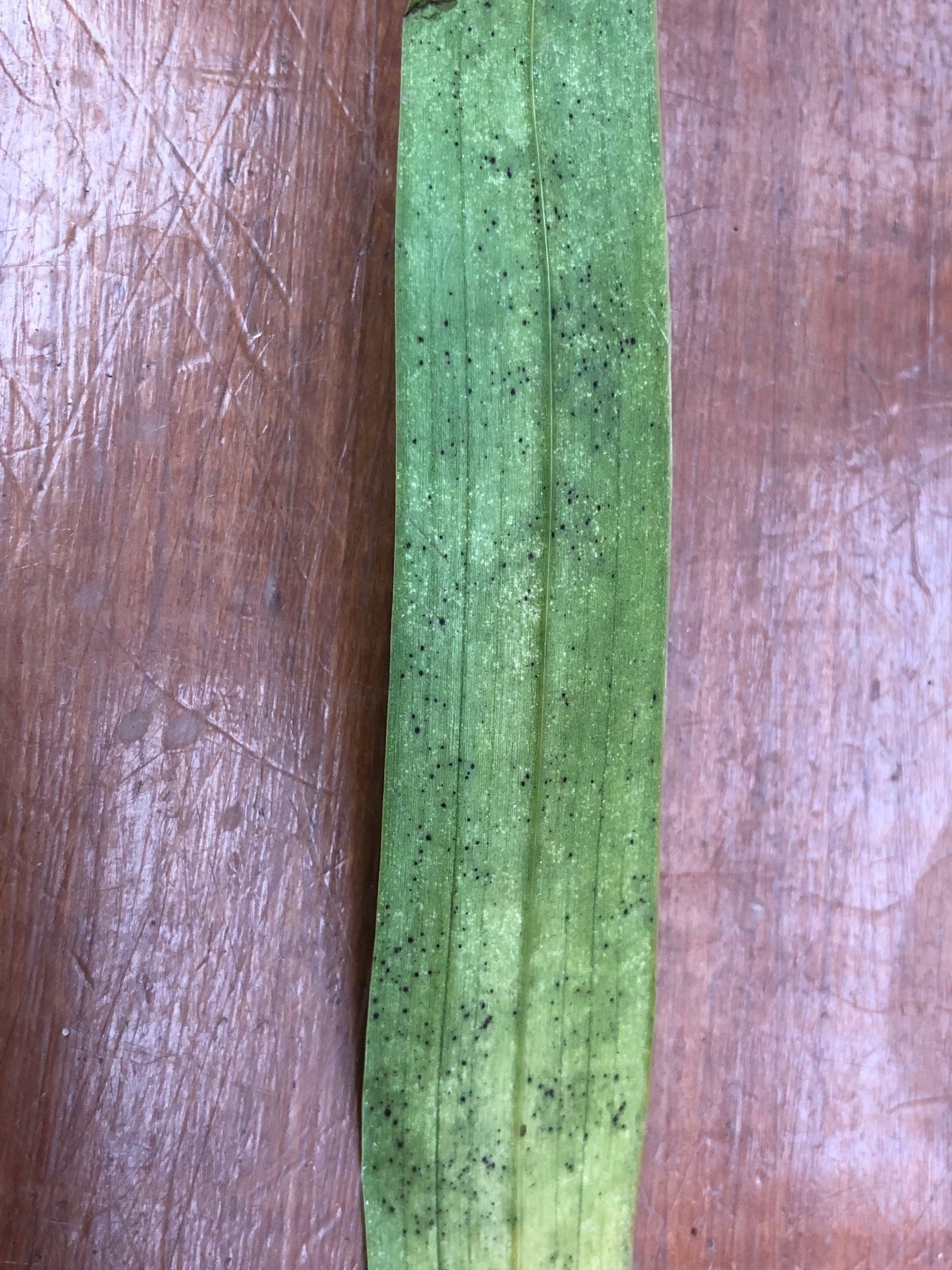 A small development of Phyllosticta and Spider Mite damage (white lesions) on a Cymbidium.

Symptoms - Small, yellow patches will develop into purple or transparent lesions (spots or streaks) on the leaves. Severe cases will develop raised sandpaper-like bodies along with the affected areas.

Causes - Poor air circulation and excess of moisture on the leaves, typically accelerated by low light.

Symptoms - Yellow spots on the underside of the leaf will slowly make their way through to the top after a few weeks. As they enlarge in irregular patterns, they'll become slightly sunken and will sport a purplish-brown appearance. Leaf loss will occur with infections close to the node (growth junction). One of the main differences between this disease and the one above is that Cercospora is usually more mottled and lighter in colour. 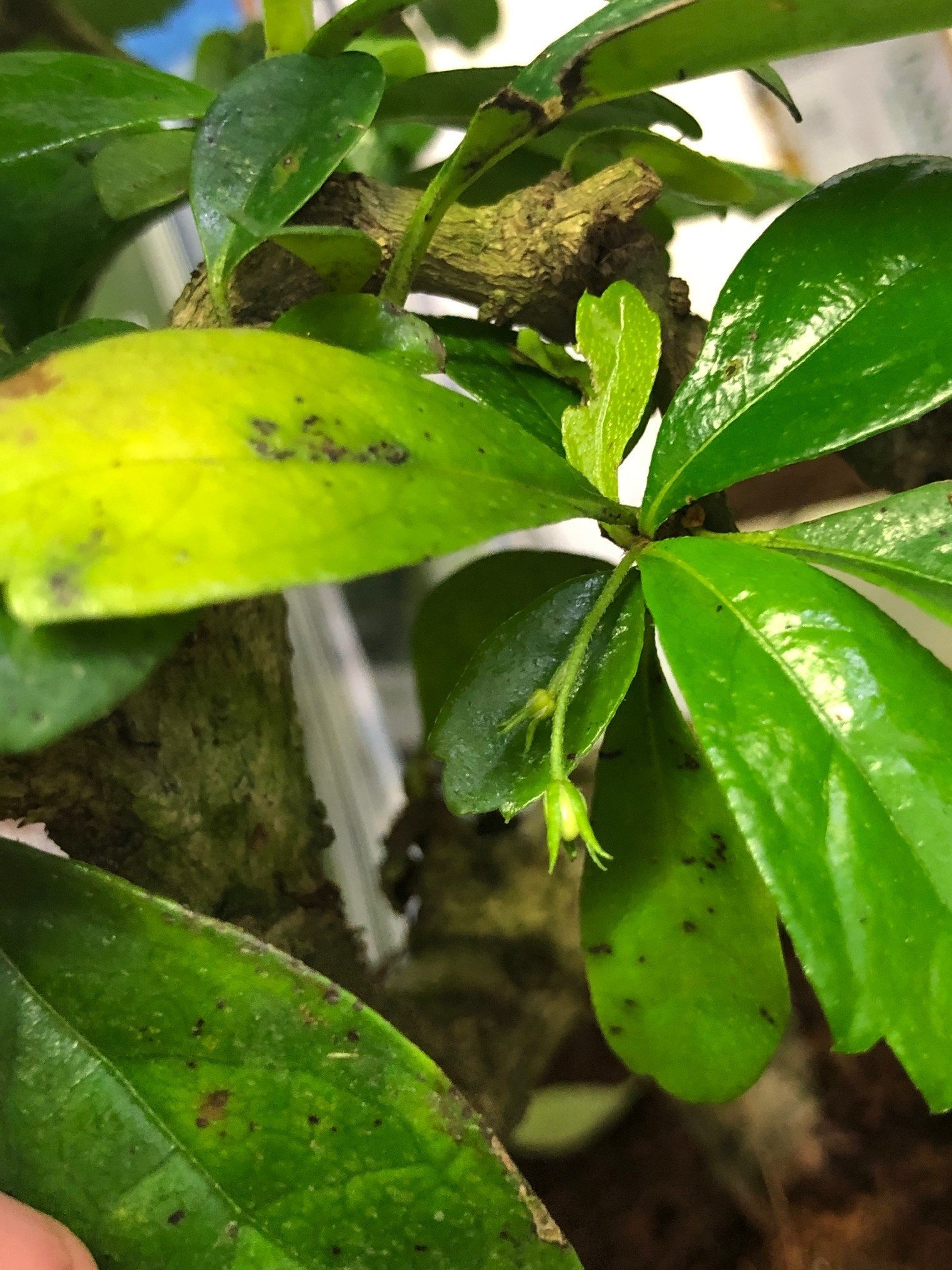 Symptoms - Brown, orange or yellow spots will slowly move spread across the leaves, sometimes accompanied by dark circular bands on the lesions.

Causes - Poor air circulation, excess of moisture on the leaves and high levels of temperature or humidity. This disease can sometimes go hand-in-hand with over-watering and root rot.