Similarly to the Root Mealybug, small infestations will go unnoticeable for many weeks, until a large proportion of the root system has been destroyed. Wilting will be the first symptom, especially when the plant is sitting in moist soil and has not been subject to irrigation abuse - i.e. under or over-watering. Here, the leaves will then adopt a yellowed appearance that'll significantly reduce the rates of photosynthesis. 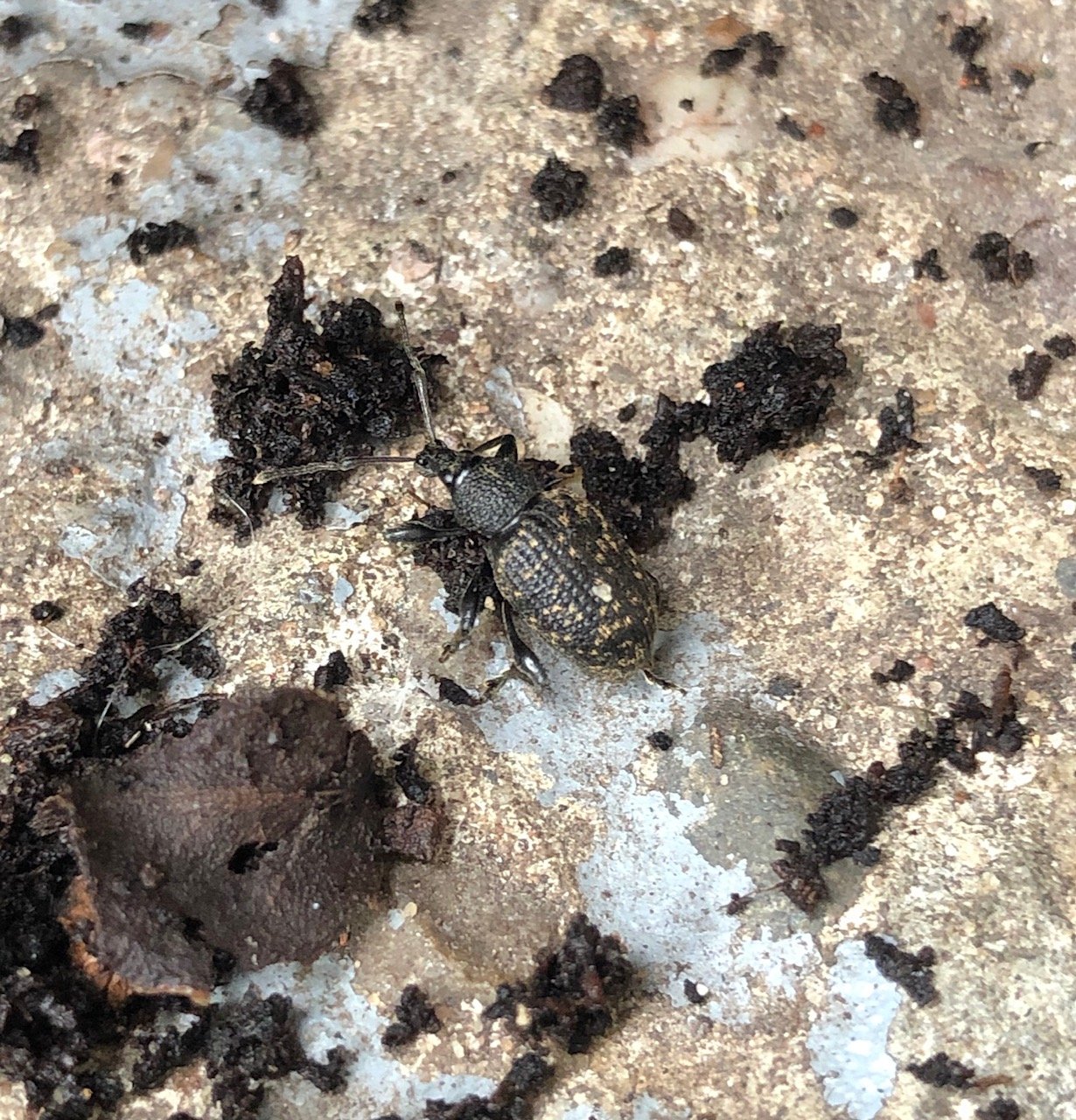 The adult stage of a Vine Weevil.

Larvae - The roots of all plants, and the basal plates of a tuberous, cormous or bulbous plants.

Adults - The foliage of the plants - they'll lay eggs in the soil once they hit maturity.

Plants - Azalea, Begonia, Cyclamen & Primula. These pests can attack almost all species when in the same pot - so be vigilant when using poorly stored compost.

N. B. - If there aren't signs of an infestation on the foliage, skip this step and move on.

For those who do have the adult bugs on the leaves, there are two stages to remove them - addressing these first, and then the larvae. It's essential to deal with the infestation in this order as the bugs will stay localised to the soil. If you start tinkering with larvae and then the critters, the latter easily fall back into the soil when washed away, thus leading to a further attack. Finding mature Vine Weevils on houseplants is rare, as it takes up to a year for the eggs to develop into adults. The larvae will do so much damage to the roots, it'll usually result in plant death before the year's up. If the plant is littered in the adult weevils, consider using a pesticide to eradicate the population.

1. Pick off all of the visible bugs with your hands - keep them in a container as they can easily escape!

2. Take the plant outside, GENTLY washing the stem, leaves and each cubbyhole using an outdoor hose. It's important to spray in at least three different angles to ensure thorough administration.

3. Once the plant is dry again, it's time to administer a pesticide. Although there are two options (organic or chemical-based sprays), ukhouseplants would highly recommend using the latter option, due to the pest's ability to bypass organic varieties. 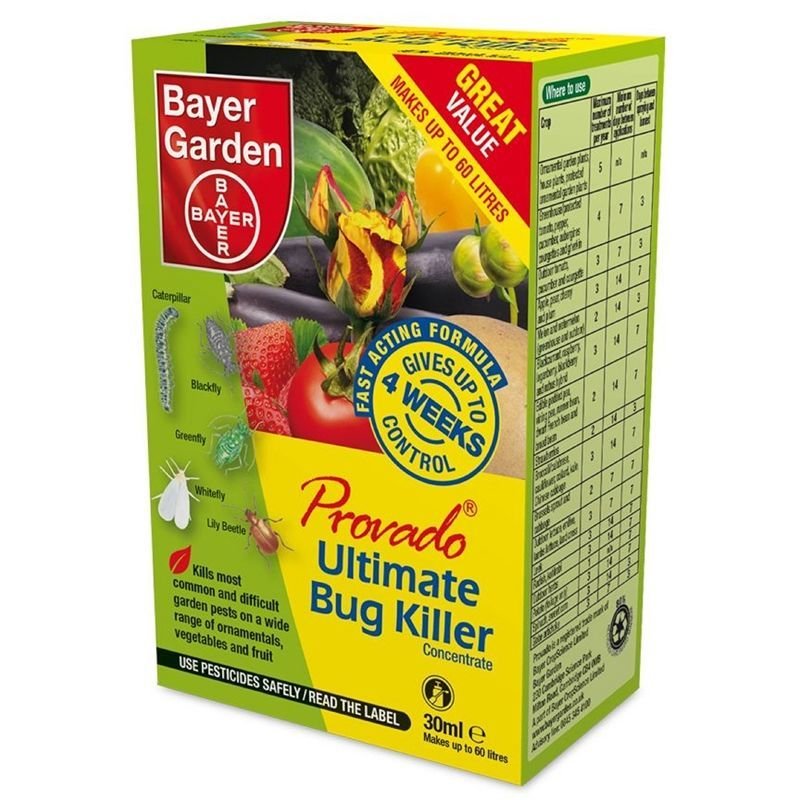 4a. We'd recommend using 'Bayer Garden Provado Ultimate Fruit and Vegetable Bug Killer Concentrate', as it'll work IMMEDIATELY after one application. It's a concentrated product, meaning that you'll have to dilute it with the appropriate amount of water. Spray both sides of the leaves, along with any cubbyholes that could house the infestation. Keep the plant away from other specimens until there are no signs of an outbreak for over a month.

4b. If you're looking for something with even more strength, try an Isopropyl Rubbing Alcohol; this pesticide will work immediately, killing the bugs within a few hours of contact and is rather cheap compared to other alternatives. Follow the manufacturer's recommendations and repeat hosing the plant down and pesticide application steps fortnightly until the infestation has elapsed.

1. Once there are no signs on the foliage for over a week, it's time to administers the larvae. Always water the plant a few hours before sifting through its soil as touching the dry root hairs will bring nothing but grief in the form of transplant shock.

2. After irrigation, take the plant out of its pot and inspect the perimeter of the soil - crush each egg and larvae as they become visible. Gently tease away the bottom third of the compost and carry on the search. As it's essential to respect the roots, refrain from unearthing all of its root system, unless wholly necessary. If you can't remove all of the bugs, don't worry as the hydrogen peroxide will take care of the rest!

3. Unlike the Root Mealybug, there'll be no 'HQ' for the larvae to develop, and instead will be the odd Weevil dotted around. Replace the soil with a fresh batch of the appropriate compost, discarding the old potting-mix to prevent a further attack with future use. For more massive outbreaks, whereby the majority of the root system's has been digested, a smaller pot may be required to help alleviate the chance of becoming over-potted.

N. B. - If there are no Weevils present, it could be a case of over-watering, whereby the roots cannot access oxygen in the soil. They'll begin to respire anaerobically, causing the breakdown and rot of the plant's lower portion. Click on this link for more information regarding this issue.

Now, before you rush to your local garden centre, this chemical is mostly found online, so have a shop around for the best deal here. For every three irrigations, incorporate a splash of the peroxide to administer the pesticide. You'll have to do this for at least three times to stop the chance of a relapse thoroughly. Always follow the manufacturer's recommended dosages, as this chemical can become detrimental to the plant when over-used.

There are two nematodes, Steinernema kraussei and Heterorhabditis megidis, that are currently on the market. They'll get to work immediately when watered into the soil, destroying each larvae or egg that crosses its path. Unfortunately, they're only available online at the moment, due to the difficulty to obtain them at most stores. Be sure to click on this link to look at the different websites that offer these microorganisms.

At the local plant shop or garden centre, inspect the soil of any plants that you wish to buy. Most Vine Weevil attacks come from already-affected plants or poorly controlled compost, so always keep this in mind when increasing your plant-collection.

Regularly check for pests on your own plants. Although this may sound patronising, many gardeners forget to inspect their indoor specimens. As soon as you see a symptom in the soil, keep it quarantined and follow the steps above!