Would you like a specialist to look at your houseplant-problems? Book a 1-to-1 video call with our friendly author, Joe Bagley, to put you in the right direction today!

Although there are little signs to an infestation above the soil line, the plant will begin to wilt and turn yellow after a while. Root mealybugs thrive off healthy plant tissue, so it's vital to catch it early. When investigating the compost, an infestation can easily be spotted; the mother bugs will secrete a white cottony substance to cover her, and the surrounding soil for the protection of her eggs. The larvae, which are located in the cotton, will hatch within forty-eight hours of being released. Root mealybugs look mostly similar to its above-soil counterparts, just a lot smaller.

Within the soil, they'll attack the roots and other organic matter (i.e. bark, coir) in the compost.

Plants - All species are susceptible to Root Mealybugs, including Begonia, Ferns & Streptocarpus.

A few hours after irrigation, take the plant out of its pot and inspect the perimeter of the soil - crush each bug or colony as they become visible. Gently tease away the bottom third of the compost and carry on the search. As it's essential to respect the roots, refrain from unearthing all of its root system if possible. If you can't remove all of the bugs, don't worry as the hot water or hydrogen peroxide will take care of the rest! 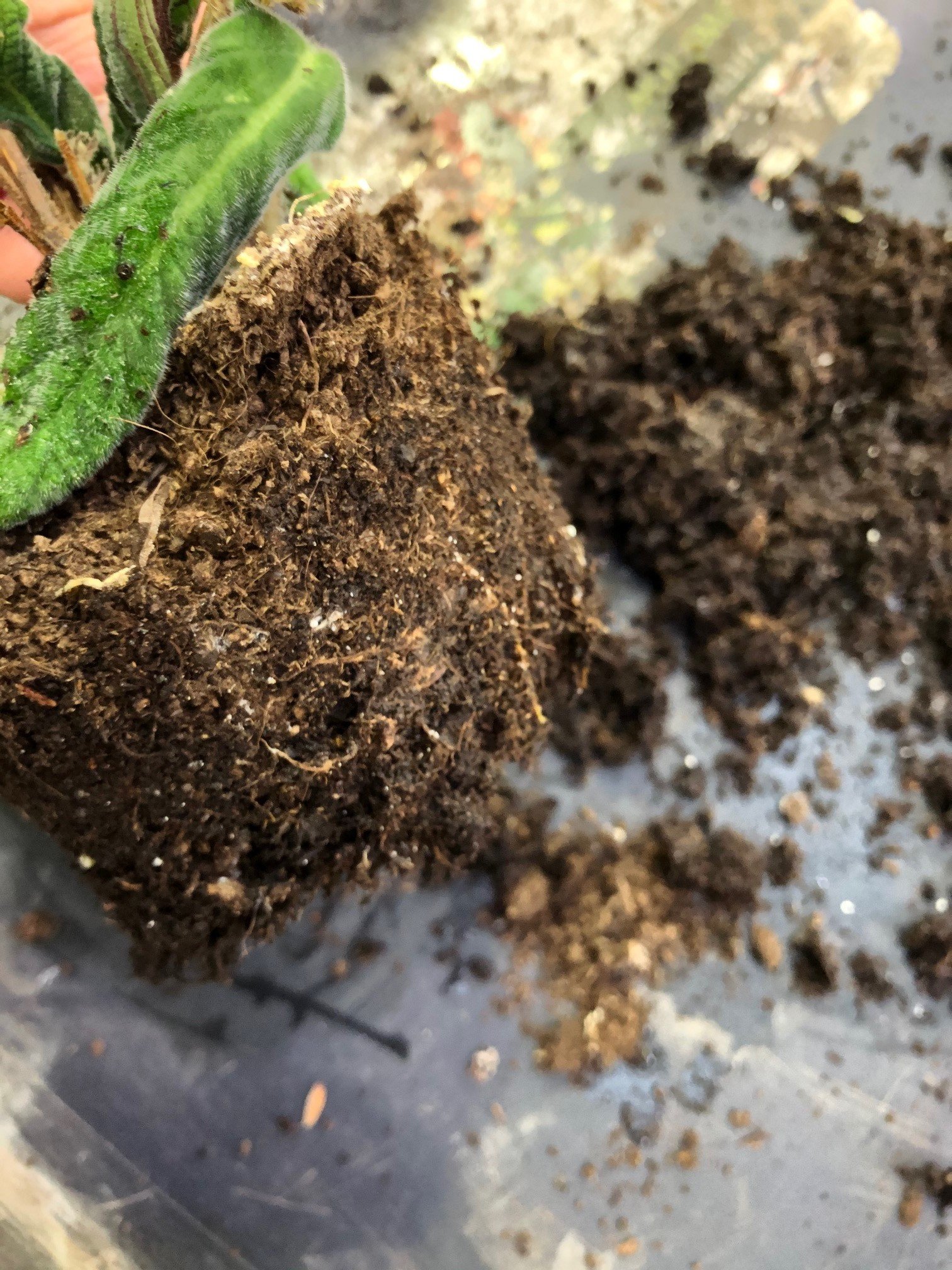 Never remove all of the roots from the soil it may result in transplant shock.

Before placing the plant back into its original container, have a scan over the pot, too. As you can see on the next image, the bugs can attach themselves to the nooks on the inside, potentially bypassing the initial inspection. Wash the pot using warm water and dish soap to destroy any remaining inhabitants. 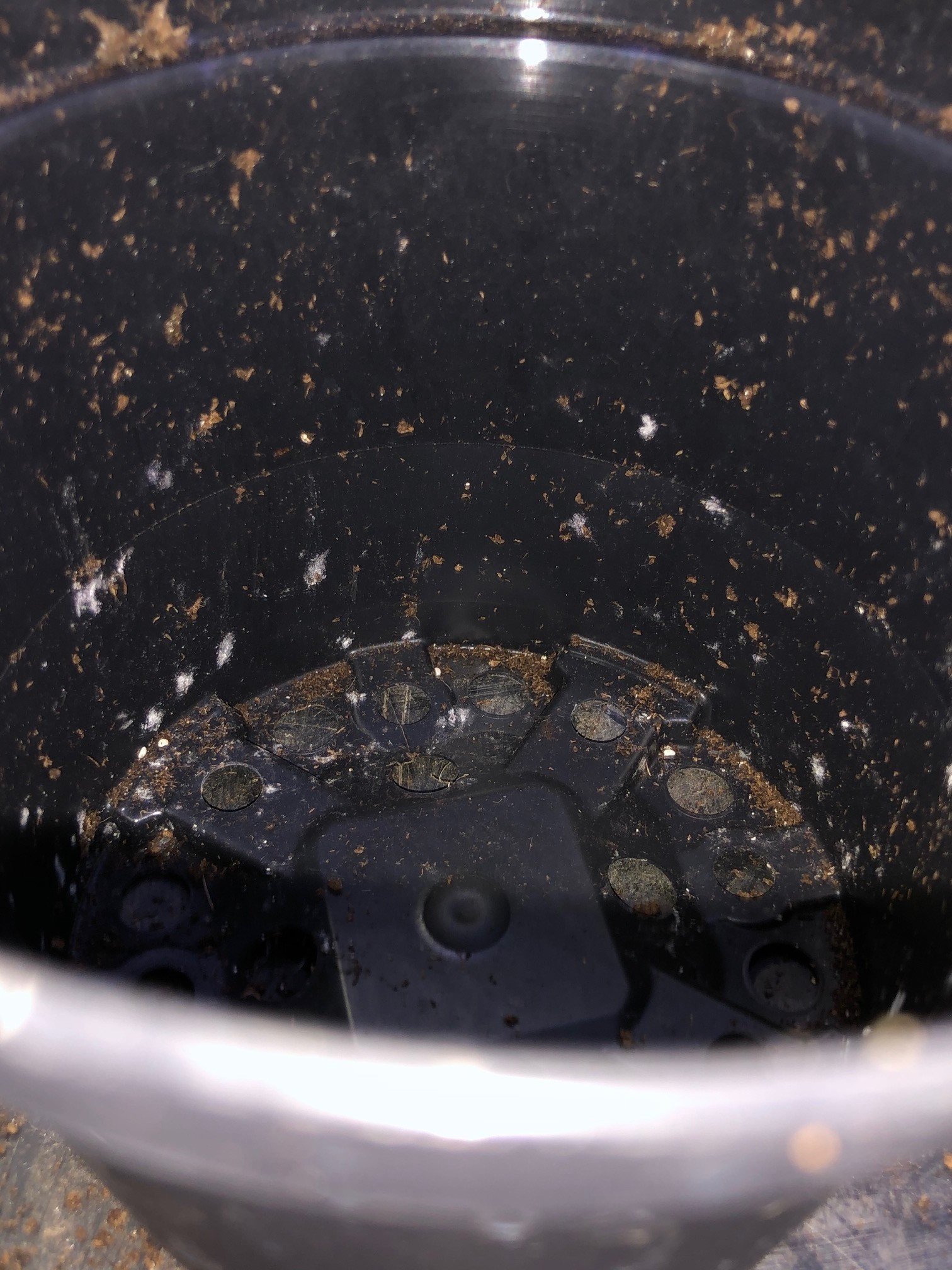 Root Mealybugs can even attach themselves to the inside of the pot!

Replace the affected soil with a fresh batch of the appropriate potting-mix. Once the plant is back in its pot, don't tinker with the roots again unless the symptoms progressively get worse. The final step to eradicate Root Mealybugs is to choose between using hot water, which of course is free, or spending some money on a chemical pesticide.

Using near-hot water to scald the pests is an effective and cheap way to control the population. Boil the water and hydrate the soil as you would with regular irrigation. This step will aid plant hydration, so always be careful of over-watering. Repeat every three irrigations, making sure the fluid is slightly on the hotter side, but still cool enough to dip your fingers in it. There was a study conducted by the 'University of Hawaii College of Tropical Agriculture & Human Resources' who found a 100% success rate for the eradication of Root Mealybugs, with little to no damage to the roots.

As the first method will take several weeks to eradicate, you may want to consider spending some money on 'hydrogen peroxide'. Now, before you rush to your local garden centre, this chemical is mostly found online, so have a shop around for the best deal here. For every three irrigations, incorporate a splash of the peroxide into its with to administer the pesticide. You'll have to do this for at least three times to stop the chance of a relapse thoroughly. Always follow the manufacturer's recommended dosages as Hydrogen peroxide can become detrimental to the plant when over-used. If you're worried about killing your plant, use the hot-water trick!

At the local plant shop or garden centre, inspect the soil of any plants that you wish to buy. Most infestations come from already-affected plants, so always keep this in mind when increasing your plant-collection.

Regularly check for pests on your plants. Although this may sound patronising, many gardeners forget to inspect their indoor specimens. As soon as you see a symptom in the soil, keep it quarantined and follow the steps above!

If you need further advice with your houseplants, book an advice call with ukhouseplants' friendly and expert writer today! This can be done via a video or audio call on most apps, including Facebook, FaceTime & Skype. A ten-minute call costs £3.99  (US$5),  or £14.99 for thirty minutes. You can ask multiple questions, including queries on plants, pests, terrariums, repotting advice and anything in between. Please consider supporting this service to keep ukhouseplants thriving!