A few hours of direct sunlight is a must; shady locations could lead to diseases associated with over-watering. The frequencies of irrigations solely rely on the amount of the sun received. If the Adromischus begins to develop a discoloured white crown, this is typically down to too little light. Newly-propagated 'pups' must not receive any sunlight as their insufficient root systems will not soak up enough moisture to survive the harsh rays.

During the growing period, thoroughly water the soil every ten to fourteen days, allowing the soil to dry out in between. Winterising your Adromischus is essential to maintain good health; keep the plant 'ticking over' by reducing the number of irrigations to every three weeks and avoid over-fertilisation. One word of advice is never to allow excess moisture to settle either in the actual crown of the plant or underneath the pot, as both will cause southern blight or even black rot. Under-watering symptoms include drooping leaves, stunted growth, and drying leaves; these can be a range of different issues, including forgetfulness, too much sunlight, or the plant being pot-bound. Over-watering symptoms include root rot, a rotting base, or sudden plant death. Adromischus must have sufficient light levels (at least two hours of direct sunlight a day) to counteract the chance of root rot. For more severe cases, click on this link below to learn about how to address root rot.

This is not a factor; however, a quick hose down from time to time will reduce the number of dust particles covering its leaves. 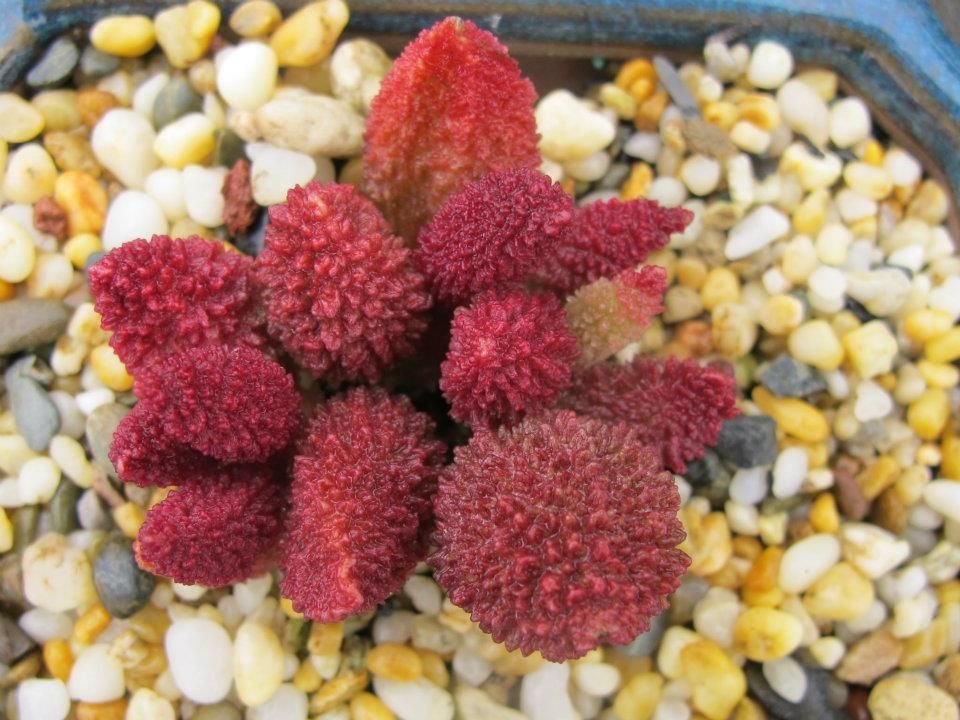 Leaf-drop could be the product of many issues, including too low temperatures, droughts and irregular watering. Especially in winter and spring, if the location is susceptible to temperatures below 12°C (54°F), your plant may begin to shed its older leaves, leaving you with a naked plant. These symptoms are also similar to continuous under-watering, where the plant has endured long periods of droughts. If your specimen has begun losing its older leaves, increase the temperature and slightly increase your watering a fraction. Hopefully, within a few weeks, the rapid decline will be under control, and the specimen should begin re-growing again.

Over-watering is the most common issue, with typical signs including a softened yellow stem and stunted growth. There must be periods of droughts to replicate the habitats of the central-east American deserts, as well as limiting the chance of diseases. Avoid waterlogging as there's no point fulfilling the phrase 'drenches between droughts' if the base of the pot is submerged. For more information about over-watering related issues, be sure to click on this link.

Scorched or browned edges are the result of too little water and over-exposure to the sun. Although Adromischus are a superb choice for plants in sunny locations, those that haven't acclimatised to the harsh rays will show signs of sun-scorch and environmental shock. Prolonged exposure will significantly speed the process of dehydration, so consider transplantation into a bigger pot (in the spring) to wrap the roots around moister soil.

Irregular watering regimes are most likely to cause stunted growth with sudden leaf-loss. Although under-watering is far better than over-doing it with Adromischus, you shouldn't test its ability to endure long-lived droughts too often, especially if it's situated in direct sunlight! 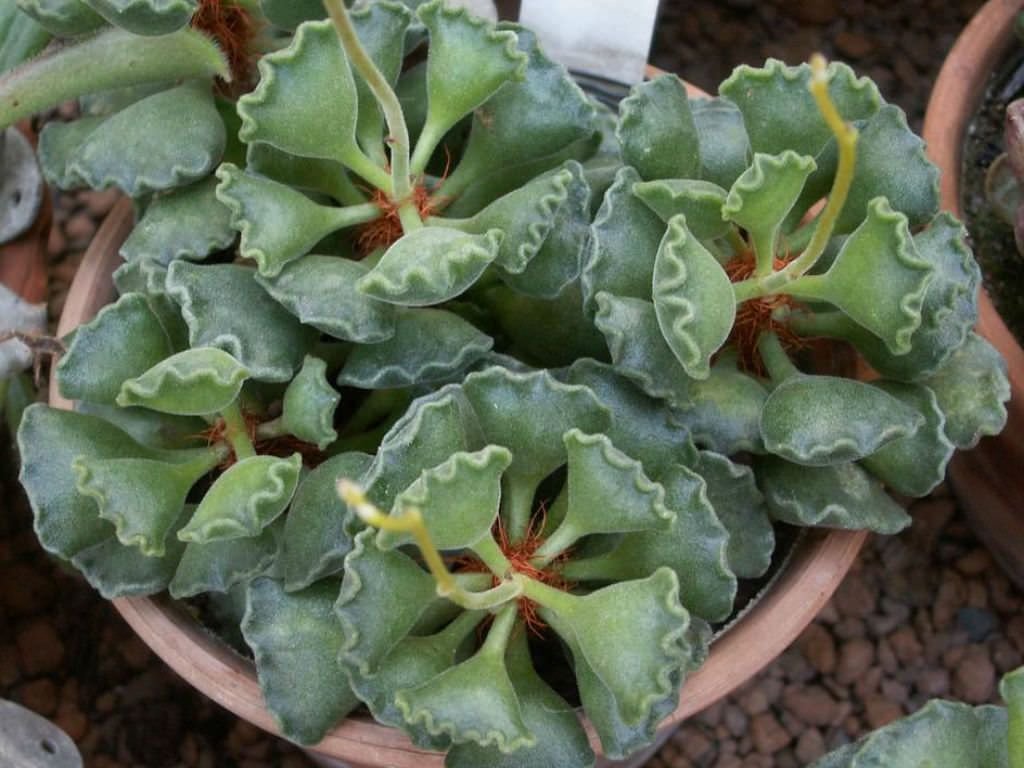 Charles Antoine Lemaire first described the genus in 1852, during an extensive voyage to Southern Africa in the late 1840s. He used the Greek words, adros & mischos, meaning thick stems, to describe the typical traits of many mature species within the new genus. 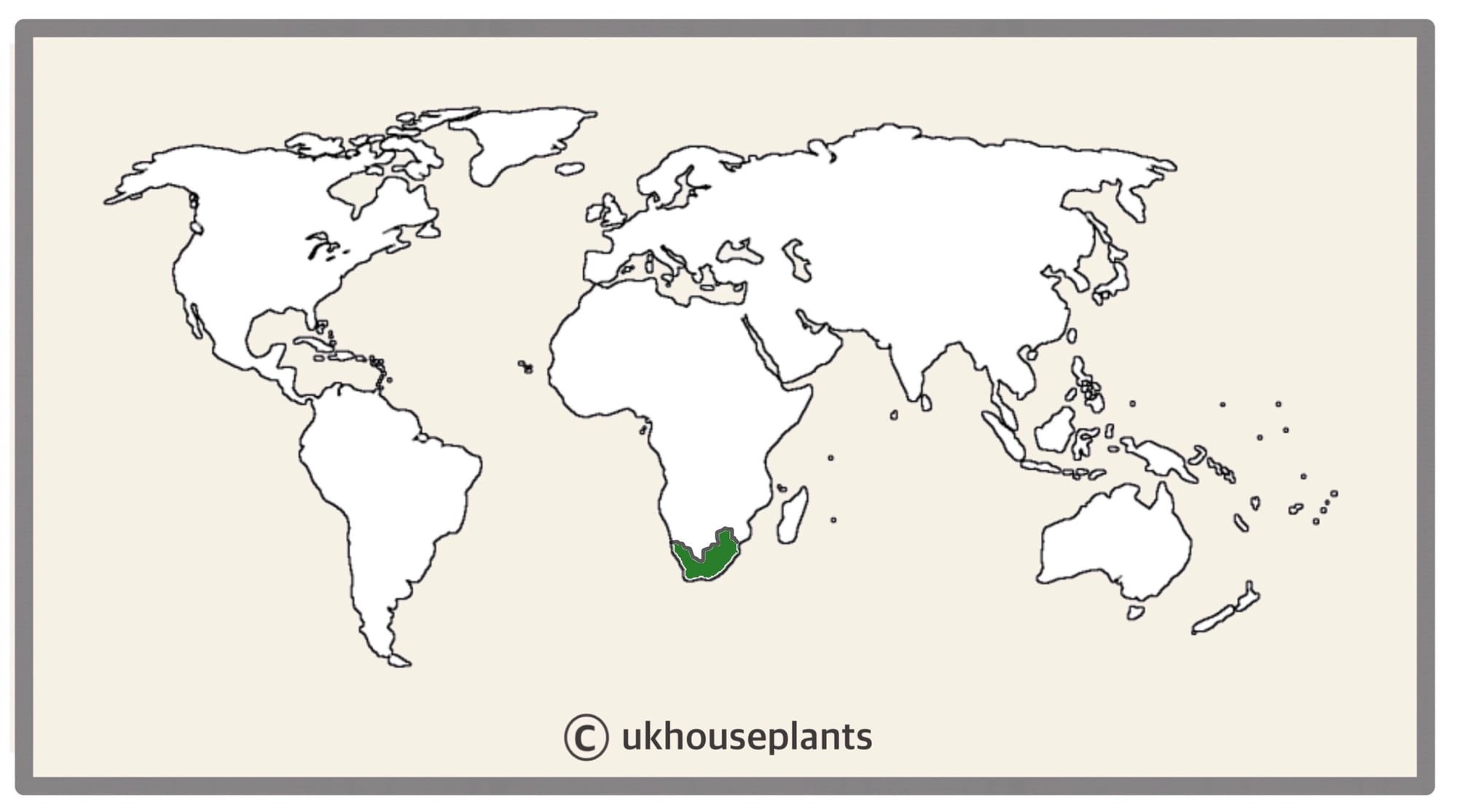 The Distribution of Adromischus.

12° - 25°C (50° - 78°F)
H1b (Hardiness Zone 12) - Can be grown outdoors during the summer in a sheltered location with temperatures above 12℃  (54℉),  but is fine to remain indoors, too. If you decide to bring this plant outdoors, don't allow it to endure any direct sunlight as it may result in sun-scorch and dehydration. Regularly keep an eye out for pests, especially when re-introducing it back indoors.

Most species will reach heights of 0.3m in height and 0.3m in width, with the ultimate height being reached within 8 - 10 years.

Offset (Pup) Division - For this method, it's best to divide in spring or summer and once the offshoots are at least a quarter of the mother plant's size. Remove its pot and place your hand in between the junction that connects the two; soil may have to be brushed away to get a better grip. Gently push the pup downwards while supporting the mother plant until you hear a snap. Cautiously separate the root systems, keeping great care in keeping them damage-free. Place the new plantlet in a small pot with a well-draining potting mix, much similar to the original soil, and maintain the same care routines. 'Cactus & Succulent' compost is best, or you can make your own using 'Multipurpose' compost with added grit or perlite. Provide a bright setting with temperatures around 18°C (64°F) with the majority of the soil drying out in between waters. New leaves should emerge within the six weeks, as long as the soil is kept on the drier to life.

Stem Cuttings - Nip two inches off from the leading growths, located at the edge of the foliage line using your fingers or sterile scissors. Be sure to choose damage-free, the juvenile growth as any cuts and bruises will lead to disease. Place the stems a third into the soil, making sure no leaves are submerged - you may have to remove the lower leaves to reinforce this step. Use a 5cm pot and a well-draining potting mix, preferably 'Cactus & Succulent' compost, to reduce the risk of over-watering and basal rot. Provide a bright setting with temperatures around 18°C (64°F) with the majority of the soil drying out in between waters. New leaves should emerge within the six weeks, as long as the soil is kept on the drier to life. If you need any more help with propagating succulents, send us an email via this link!

White, red, yellow or pink flowers are held by a spike that'll develop each year, reaching up to 40cm in height. Each flower can last up to several days, with the blooming process lasting several weeks. Ensure to keep the plant sufficiently hydrated with a fortnightly feed of 'Cactus' labelled feed during this time to prolong this period. Gorgeous flowers may be produced in spring if a good dormancy period from the previous winter is served. Reduce temperatures to around 10°C  (50°F)  accompanied by little watering to promote the plant to enter this vital stage of the year.

Repot every two years in the spring using a 'Cactus & Succulent' labelled potting mix and the next sized pot with adequate drainage. Hydrate the plant 24hrs before tinkering with the roots to prevent the risk of transplant shock. For those situated in a darker location, introduce an extra amount of perlite and grit into the deeper portion of the pot to downplay over-watering risks. Click on this link for a detailed step-by-step guide on transplantation, or via this link to learn about repotting with root rot.