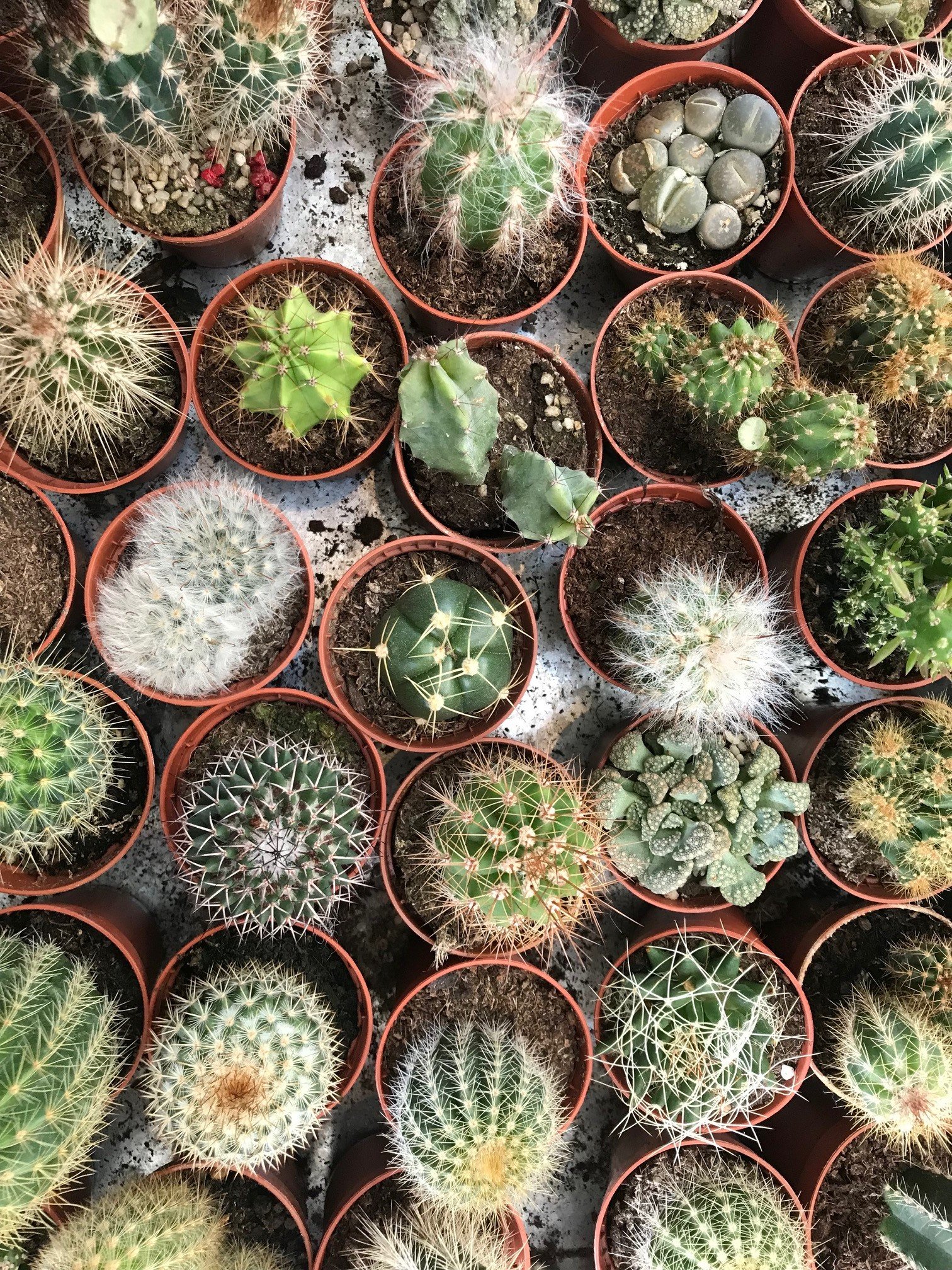 Listen to the Cacti Podcast here!

Place the specimen in the brightest location as possible. A few hours of sunlight per day is highly beneficial as it'll significantly reduce the risk of over-watering and root rot. Due to the intolerance to low light, avoid placing one in areas where a newspaper can't be read without the use of artificial light.

If you've recently purchased a Cactus, chances are it hasn't acclimatised to the potential direct sunlight you'll give it. If you're interested in placing yours in a brighter environment, gradually increase the light levels over a few weeks to prevent the risk of environmental shock or sun-scorch.

The ukhouseplants' rule of 'droughts between drenches' strongly applies to all desert Cacti. In the growing period, allow ALL of the soil to dry out in between waters, reducing this to every eight to ten weeks in the autumn and winter for its dormancy. Under-watering symptoms are usually uncommon; however, crispy and stunted growth are possibly due to either forgetfulness or too much sunlight. Over-watering symptoms include root and stem rot, mushy yellow leaves or a rotten stem. These issues can be corrected by removing the plant out from its pot and inspecting the rootball or soil. Are the roots brown and mushy? If so, remove the affected roots and replace the soil with a well-draining potting mix (Cactus & Succulent Compost is best). If the bottom of the stem is mushy, it's game over - the 'heart' of the plant has rotted, meaning that revival is minimal. Cacti are more likely to suffer from over-watering if they're situated in a dark location or overly-moist soil.

This is not a factor; however, a quick hose down from time to time will reduce dust particles or pests on its body.

Supplement with a Cactus-labelled fertiliser every six weeks in the growing period, reducing this to bimonthly in autumn and winter. Whilst the specimen is in bloom, switch to a product high in potassium to prolong the duration of flowers - a good example of this would be a Poinsettia or Tomato-labelled Feed. Although a general plant fertiliser is acceptable, you'll run the risk of burning the roots if over-applied, especially with the combination of a 'ready-to-use' product and dry soil. 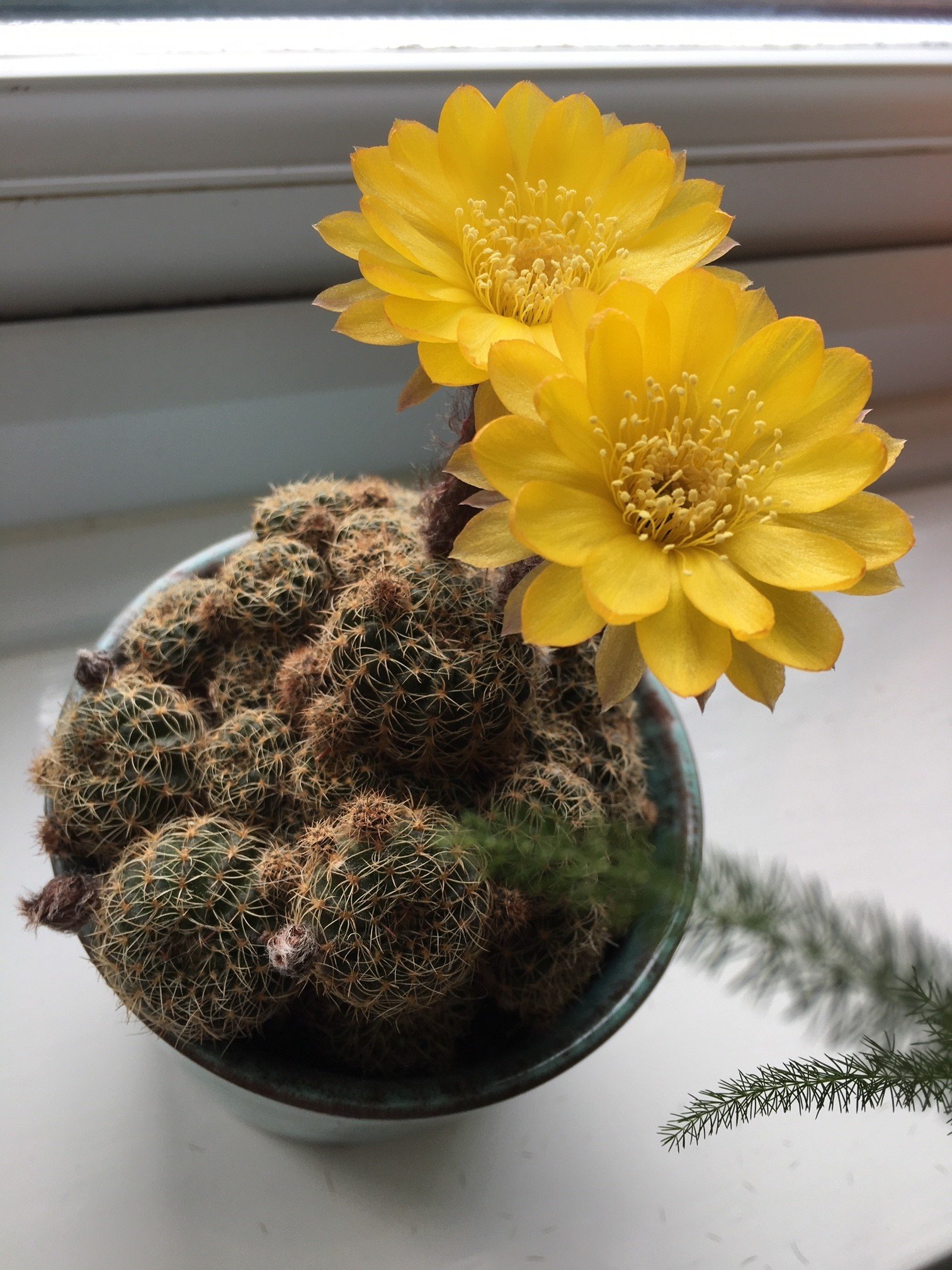 The following section is tailored for certain species that may flower in the spring or summer months.

Unfortunately, not all Cacti will actively flower between the months of spring and summer. Species of Mammillaria, Gymnocalycium, Notocactus, Parodia & Rebutia are most likely to bloom, producing small flower buds from mid-spring onwards.

This is the most significant step; reduce the temperature down by around 5℃ compared to the summertime or place in a room that's between 10º - 15℃ (50º - 59℉). You'll be at a significant disadvantage if the ambient temperature is kept constant throughout the year, as Cacti will only respond in locations that have daily fluctuations of around 7℃. Never exceed the minimum temperature as it may lead to plant death or yellowed foliage at a bare minimum. If these steps are followed successfully, you could see a show of blooms in the following summer - but remember, dealing with nature may not always provide the results you'd relish!

Over-watering is the most common issue, with typical signs including a softened yellow stem and stunted growth. There must be periods of droughts to replicate the habitats of the American deserts, as well as limiting the chance of diseases. Avoid waterlogging as there's no point fulfilling the phrase 'drenches between droughts' if the base of the pot is submerged. For more information about over-watering related issues, be sure to click on this link.

Scorched or browned edges are the result of too little water and over-exposure to the sun. Although Cacti are a superb choice for plants in sunny locations, those that haven't acclimatised to the harsh rays will show signs of sun-scorch and environmental shock. Gradually increase the amount of light every week, starting from an indirect location to a few hours of morning/evening sun over the course of a few weeks. Prolonged exposure will significantly speed the process of dehydration, so consider transplantation into a bigger pot (in the spring) to wrap the roots around moister soil.

Over-supplementing a Cactus will bring nothing but grief in the likes of yellowing leaves and weak, dramatic growth. Although a six-weekly feed is an excellent way to promote good health, dry soil and fertiliser salts will quickly lead to the burning of roots. The advice for this issue is to pre-moisten the soil beforehand and reduce the frequency of fertilisations somewhat.

'Corking', or a hardened brown base (pictured below) is part of the ageing process for a Cactus. If those sections are hard and don't give way when applying pressure, everything is okay. If, however, the base has become soft, action must be taken quickly. Take the plant out of the pot and inspect its root system. If it's brown and mushed over, you'll have to discard it as the plant has collapsed from the inside out. For those that still have good root systems, keep the plant under-watered and provide a bright location with a hint of direct sunlight. The recovery process will be long, and sometimes not even successful - give it a go and see if you can resuscitate it! 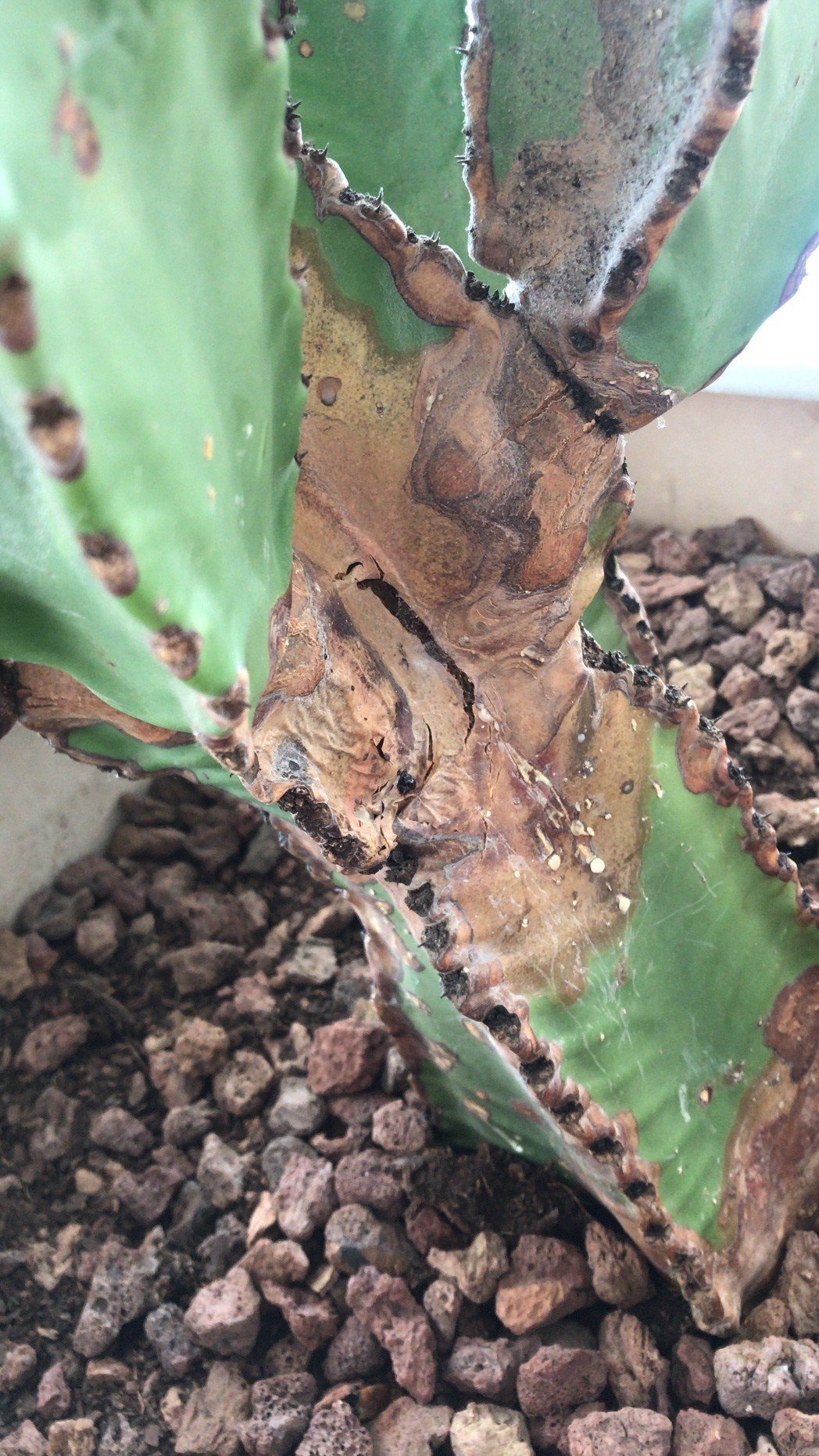 'Corking' is a natural process for many desert Cacti, proving support and a barrier against hungry predators.

Although Cacti have been used for medicinal and decorative purposes for over six hundred years, drawings and other findings can back to 9'000 years ago. Almost all of the 1,750-known species originate from the Americas, with only the Rhipsalis baccifera (Africa) breaking this trend. The formal classification of Cacti arose in the 1730s by Carl Linnaeus, who placed the species he knew into two groups - Cactus & Pereskia. Before his book was published in 1753, he re-conjoined the two groups back into Cactus, a Greek word that was first used by Theophrastus (A Greek Philosopher, C. 300BC), describing a 'thornful' plant.

Further Facts about the Popular Genera 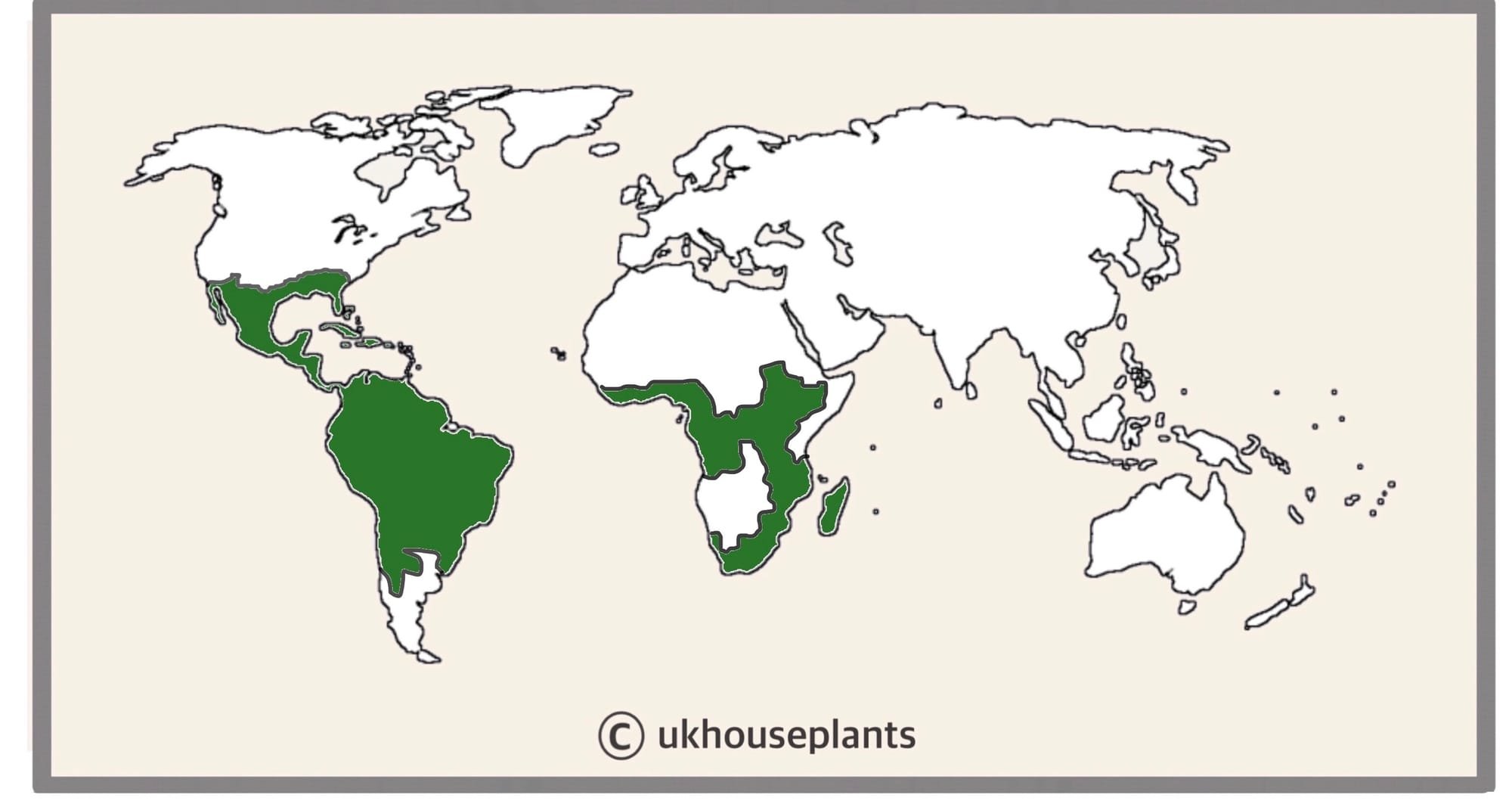 10° - 28°C   (50° - 82°F)
H1c - Can be grown outdoors in the spring and summer in a sheltered location once the nighttime tempreetres are above 10°C. Always perform a pest-check before re-introducing back into the home to avoid an infestation with other plants - most common to look out for are Mealybugs and Vine Weevils.

Reducing this temperate to around 12°C (54°F) during the autumn and winter months will not only help its its dormancy period, but it'll also increase the chance of a bloom in the spring or summer.

In some cases, you can even graft epiphytic (tropical) Cacti into terrestrial desert species. Have a look at the strange image below to be amazed! 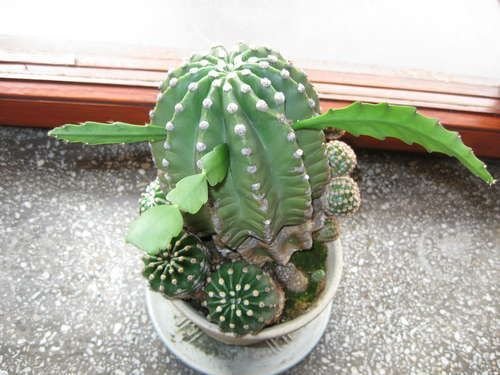 Via Seed or Offset Division via 'Pups' or Leaf Cuttings. 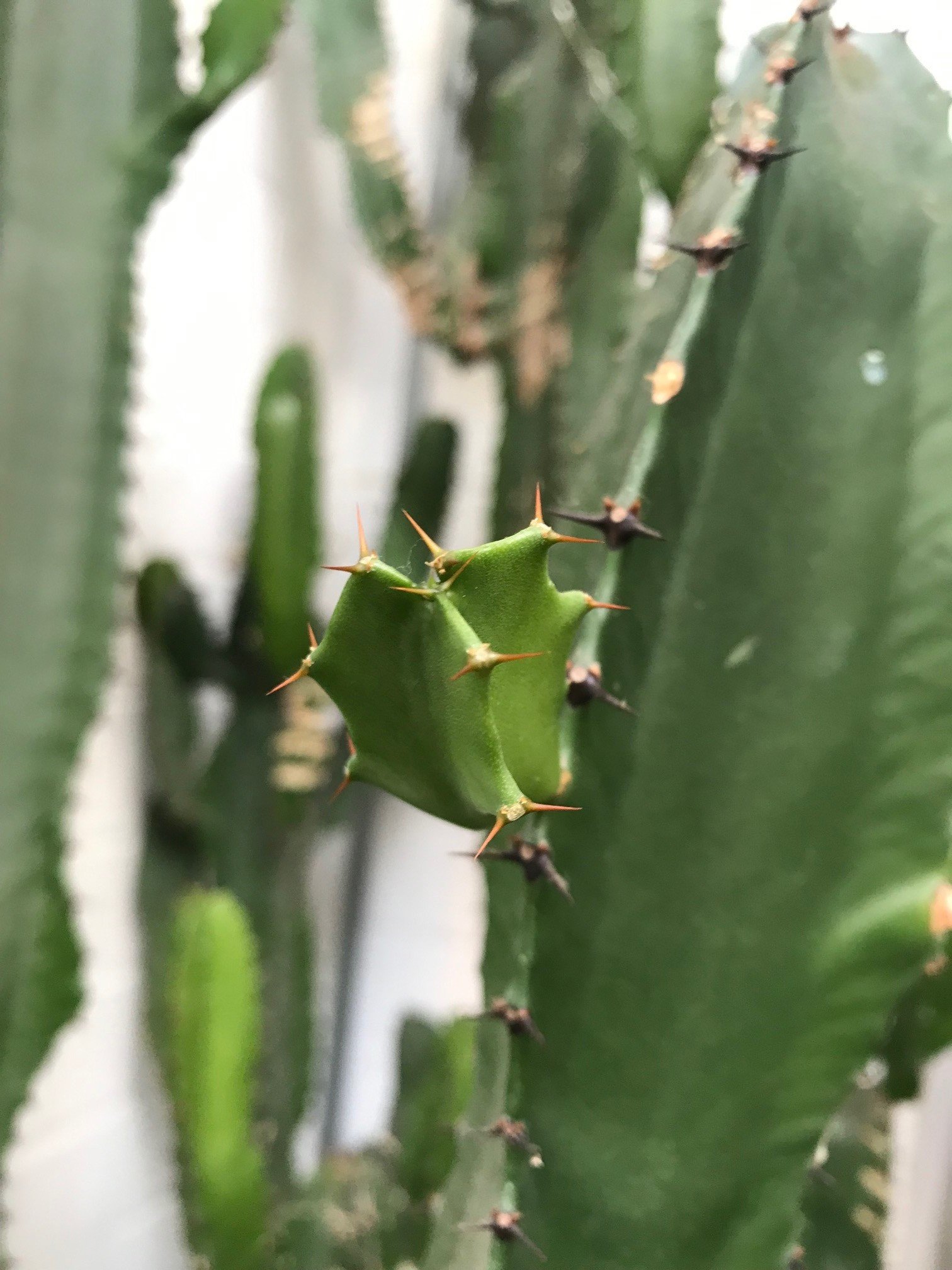 An Euphorbia trigona lateral offshoot that can be propagated into its own plant.
Lateral offshoots (Pup) Division - Some species, like Euphorbia, Opuntia, Gymnocalycium, will produce lateral growths that can be propagated in the spring, once they surpass 7cm in length. Wear some protective gloves and place your hand in between the two. While placing your hand closely to the nodal junction, gently push the pup downwards, while supporting the mother plant - you should hear a snap. Cautiously separate both the mother plant and pup's roots systems, keeping great empathise in keeping the roots intact and damage-free. Place the new plantlet a third depth in a well-draining potting mix, much similar to the original soil, and maintain the same care routines. Houseplant compost is acceptable, or you can make your own using multipurpose compost with grit or perlite. Don't worry if the 'pup' doesn't have any roots, these will form later down the line. Make sure not to use a pot that is too big as a ratio of roots-soil that leans towards the latter will cause root rot and eventually plant death. Keep the soil dry and out of direct sunlight for the first two months. When the pup is rooted, increase the light intensity and frequency of waters.

Repot every three years in spring using a 'Cactus'-labelled potting mix and the next sized pot with adequate drainage. Cacti are far better being potbound for several years due to the heightened risk of root rot and repotting-issues (like transplant shock), so only repot if you feel it's wholly necessary - restricted root growth will also increase the chance of blooms, too.

If you're still unsure of what to do, never hesitate to send us an email or direct message on Instagram to get our expert advice on transplantation. 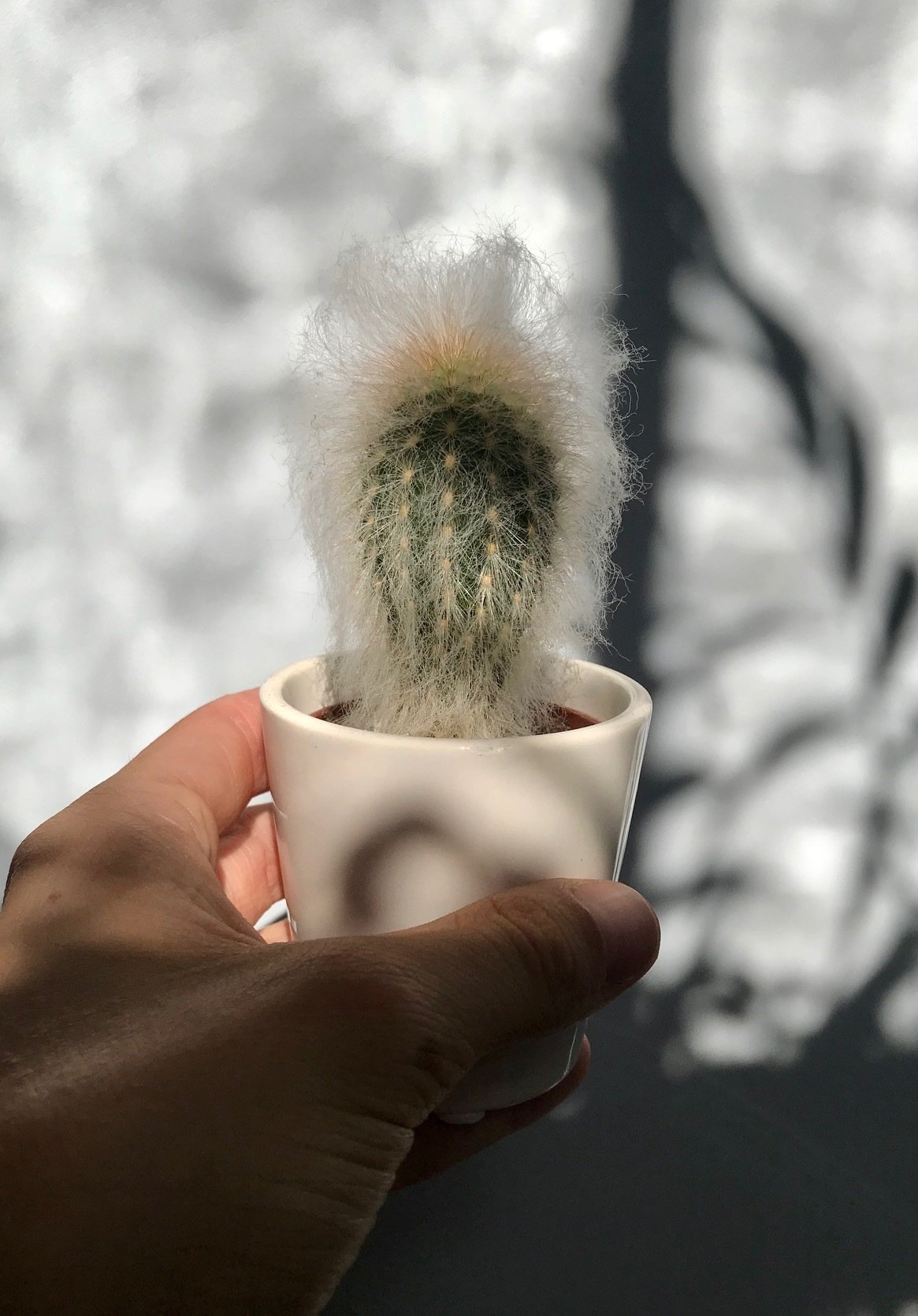 Most species are classified as poisonous. If parts of the plants are eaten, vomiting, nausea and a loss of appetite could occur. Consumption of large quantities must be dealt with quickly; acquire medical assistance for further information.

Most Garden Centres or Florists, & Online.