Click Here to Learn about Repotting with Root Rot!

As a rule of thumb, most houseplants like to be transplanted every two or three years in the next sized pot. Although repotting is reasonably straight forward and requires little skill to do correctly, there are four rules to follow that ukhouseplants recommends.

2. When is the Right Time to Repot?

Most plants want to be repotted as they enter the growing season in the early spring. Although there are few exceptions (explanation in a moment), this is the ideal season as the roots will grow into the new soil much quicker than in the autumn or winter months. Transplanting during their dormancy period could entice root rot to develop, as there'll be an excess of moisture surrounding the root ball which won't be soaked up. When a soil is overly irrigated, the oxygen will be pushed to the surface, leaving an anaerobic environment. Roots need oxygen to respire for cell management, so surrounding them in too moist soil will cause suffocation and rot.

Symptoms of an Under-Potted Plant

Enjoying the articles? Please support ukhouseplants by giving a small donation via this link!

3. How to Perform a Successful Transplant 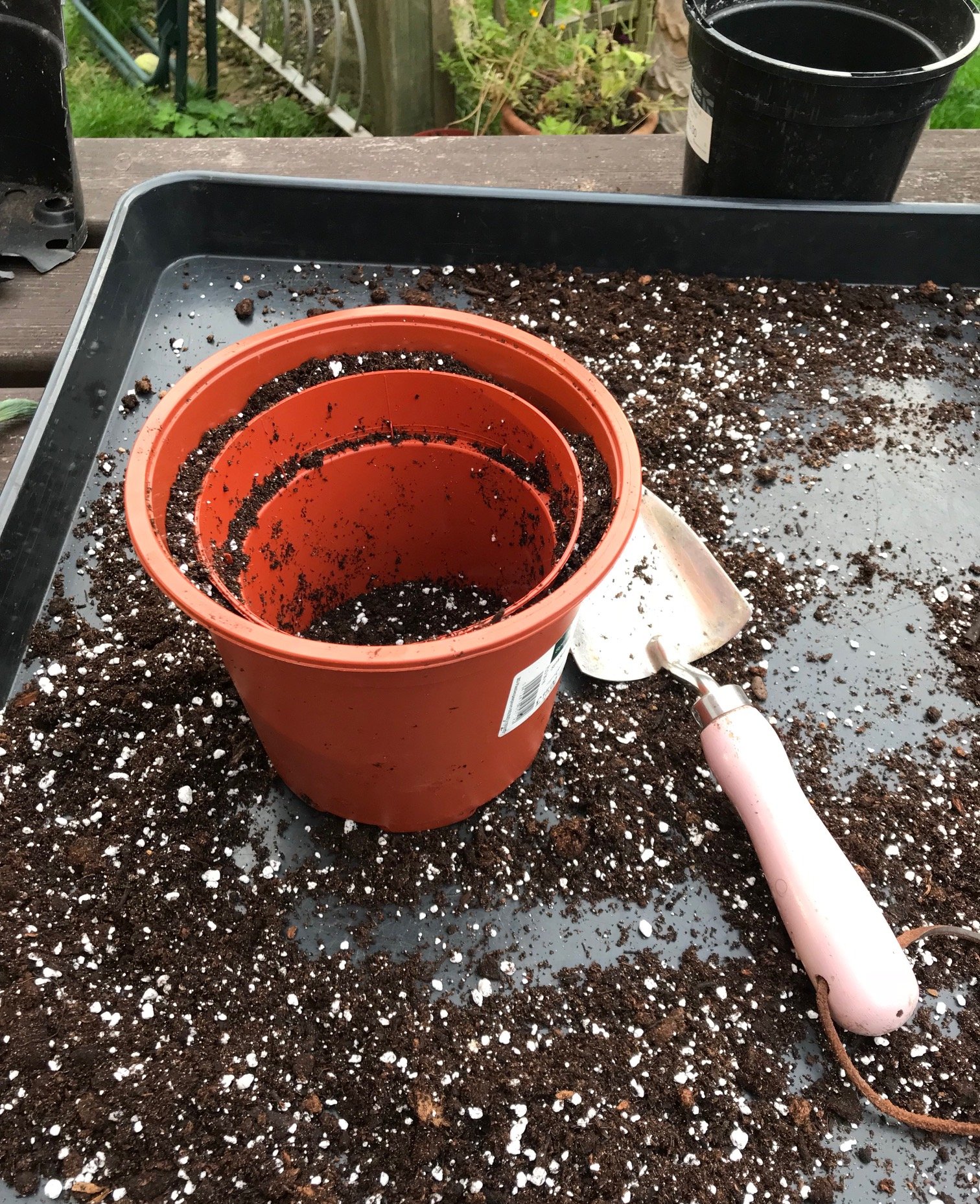 Placing the plant's original pot into the next one and filling the gaps with soil is an excellent way to transplant. Set the plant into the middle and fill the remaining edges with soil - it's really this easy!

• For plants situated in dark locations, add some perlite to the lower portion of the new soil (which will be located in the bottom third of the pot surrounding the rootball). As the combination of over-watering and too little light go hand-in-hand, improving the soil's drainage will significantly reduce the chance of root rot.

Alternatively, for those that are placed in direct sunlight or high temperatures, improve its water-retention by adding coconut coir or bark. These ingredients will retain the moisture for longer, thus reducing the chance of dehydration.

• Create an indoor garden or display by bunching plants that have similar soil requirements (well-draining, ericaceous, carnivorous, etc.). If the display is successful, after a few months you'll have to water it more frequently - this is due to the ratio of soil-roots favouring the latter, which means your roots are healthy. Have a look at the image below to see ours that was created back in 2018! 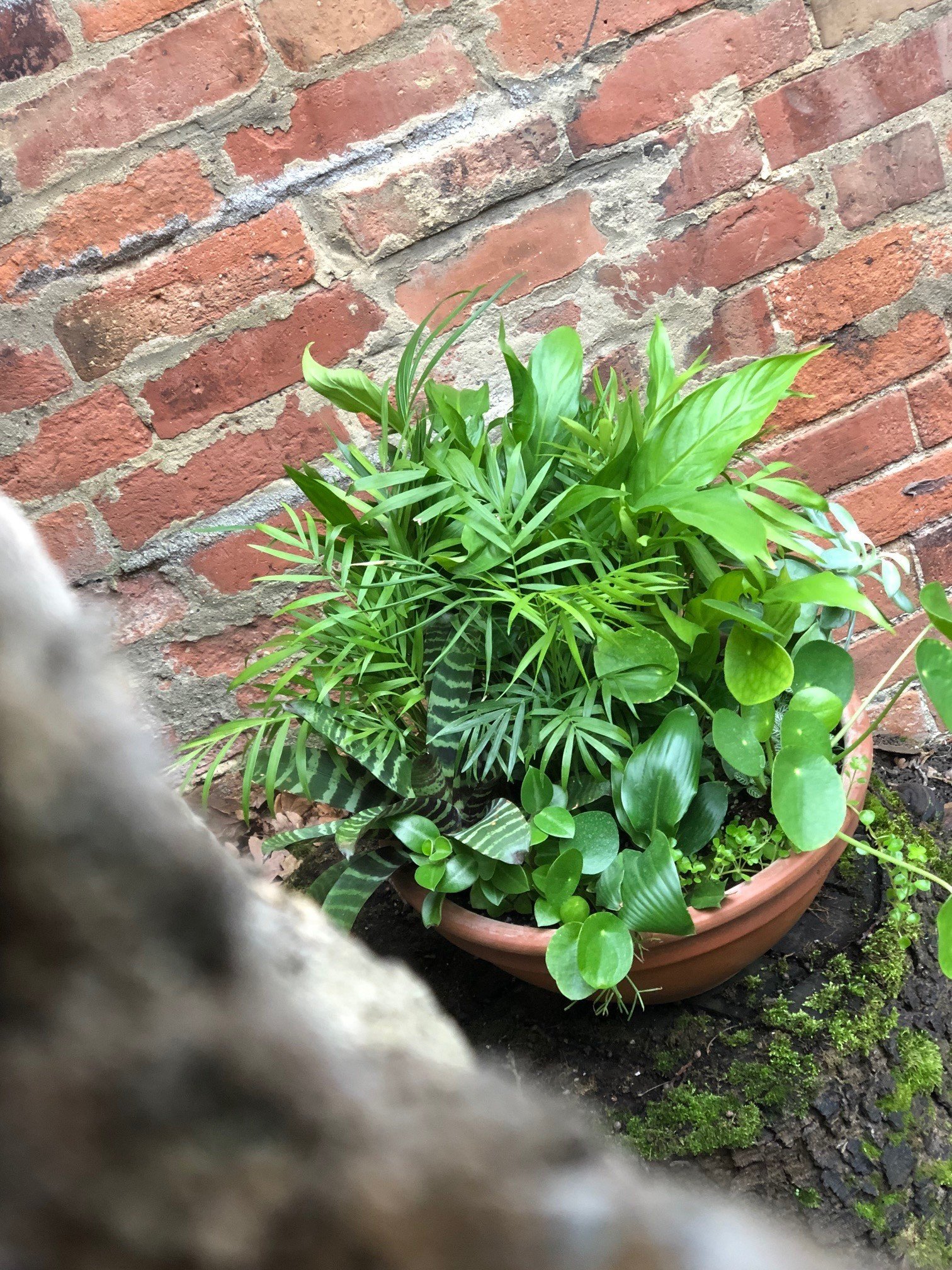 • For plants that grow predominantly in one direction, for example, a single-sided vine, move the rootball backwards to what would be the front of the pot (where the foliage sits). Phototropism will cause roots and foliage to grow towards the light, meaning that there will be more roots at the front of the pot, and less at the back. Placing the plant towards the back of the container will allow the roots to fill the whole pot and not just the well-lit-side.

• Finally, if you're thinking of repotting a vine that is growing up a moss pole, never remove attached aerial roots as the disturbance could put further stress on the plant. Extend by purchasing another same-sized pole and pushing directly into the hollow hole in the original's top - its moss-like material may have to be cut off from the top to access the hollow centre. Get a long, sturdy stick that has a similar length to the two poles combined and place in the two's centre to support the weight. Always perform the repot BEFORE adding another pole, as it'll prove more challenging due to the weight distribution and overall balance. N. B. - You'll only have to repot trailing vines every two or three years (except annually for Monstera) - if their pole needs extending, you can do this without the need for a transplant.

4. Symptoms of an Over-Potted Plant

When its time for a transplant, only use the next sized-up pot. This will minimalise the effects of excess moisture being retained in the soil for longer than necessary. Little or no roots in the new soil will result in the risk of developing root rot, with symptoms including a rotten stem, an abnormal amount of yellowing lower leaves, stunted growth and a weighty pot.

5. How to Avoid & Address Transplant Shock

Transplant shock is where the roots and their hairs have been over-moved or damaged, predominately during a repot. Avoiding this issue is easy - give the plant a good soak 24hrs before the action and NEVER tinker with the roots, unless you're dealing with root rot or splitting the crown via propagation. This 'soaking' period should occur whilst the plant is still in its original pot.

Symptoms are closely similar to dehydration - wilting, stunted growth and the yellowing of leaves are all typical signs of a stressed plant.

For a better comprehensive, ukhouseplants have categorised transplant shock into two tiers - mild and severe. Note that if your plant is wilting has rapid lower leaf loss while being sat in overly moist-soil, root rot may be to blame.

Mild - Slowed growth, a slight greying or yellowing of foliage and flower loss are all signs of mild transplant shock. Keep on top of watering, humidity levels and always provide a location with a generous amount of indirect light. Do not unearth the roots again as this will only add to its misery. Although the already-yellowed leaves will be a permanent fixture, new growth will soon take over once the plant regains its strength. If the foliage continues to wilt, do not fall in the trap of over-watering. Remember that the roots are damaged and NOT dehydrated - keep the soil evenly moist, allowing the top third of the pot to become dry in between waters. To find out more about when to hydrate a plant, type its name on the 'Q' (search) symbol on the top-banner!

Severe - The continuation of wilting, yellow or greying of foliage and stunted growth that are still prominent after a few weeks are all symptoms of severe transplant shock. As the chance or survival is minimal, there are two options. You can either wait for new growth or consider propagation if the plant continues to decline. Woody plants like Dracaena, Ficus, Schefflera & Yucca can all be propagated via stem cuttings, whereas others are separated by 'pup' or offsets. If the plant loses all of its leaves, survival will be highly unlikely, so the only sane option is to discard.

6. Choosing the Correct Potting Mix for Your Plant

Most plants will thrive in Houseplant soil; however, as it 's slightly water-retentive, Succulents will benefit more from a 'Cacti' based compost. Most plants can also be put in a well-stored sack of multipurpose compost - add a splash of grit, perlite or sand to the mix. For those that are situated in a dark location, try adding some perlite into the potting mix - this will alleviate the chance of root rot by aerating the soil profile. 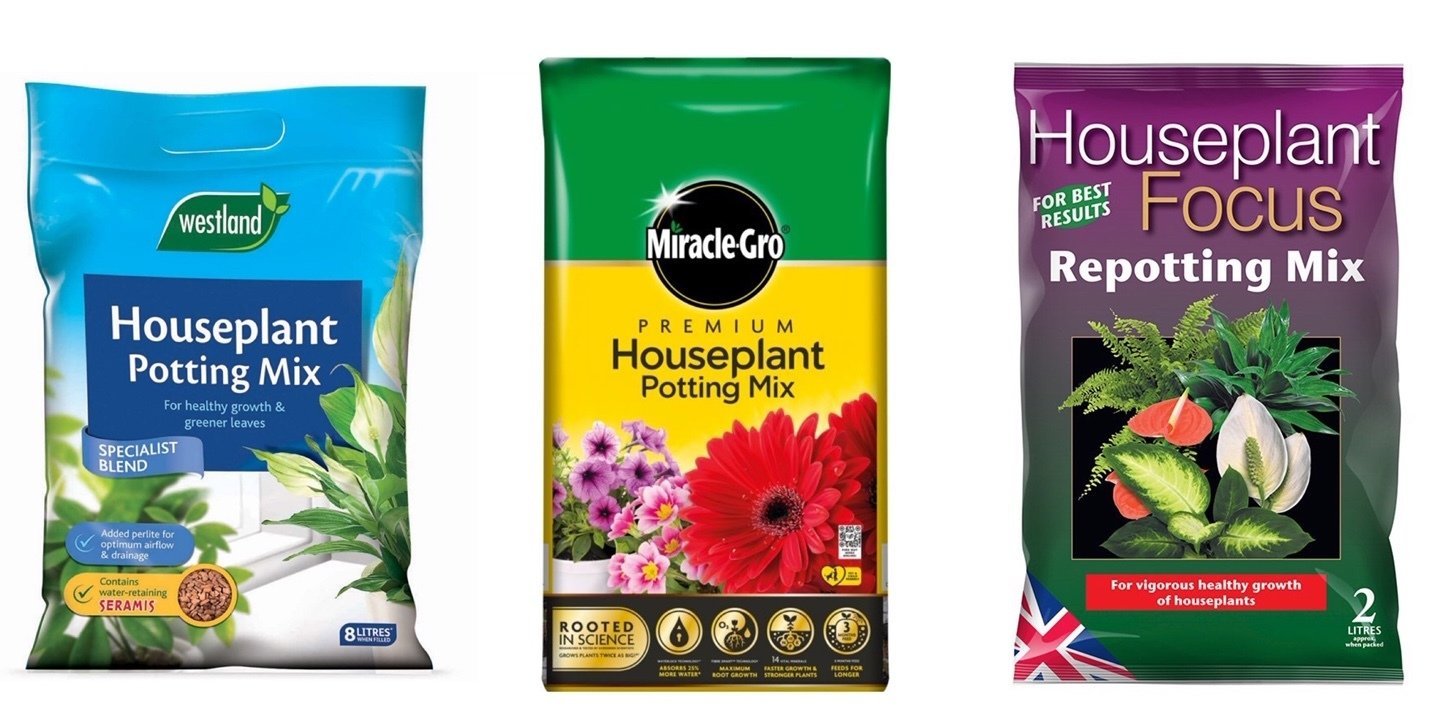 Although Bonsai will generally grow better in this type of soil, they can still be placed in houseplant soil if wholly necessary.

Ornamental Citrus & Orange Trees. Specimens that fall into this category may be placed in houseplant soil if wholly necessary, too.

Desert & Tropical/Epiphytic Cacti & Succulents. Ledebouria, Sansevieria & ZZ Plants should also be situated in this type of soil due to the high risk of root rot when placed in a traditional potting mix. If you can't obtain this succulent-specific compost, buy a bag of houseplant soil and introduce some grit, perlite and sand to the mix for additional drainage.

Moth Orchids (Phalaenopsis) will require just Orchid bark. In contrast, other members of this family, like Dendrobiums, Cambria, Cymbidiums, Epidendrums, Slipper Orchids (& Anthuriums) will respond better to a mixture of this and some houseplant compost. Aim for 1 part Orchid bark & 2 parts houseplant soil for best results.

N. B. - Jewel Orchids (Ludisia discolor) is the only species in the Orchid family to break this trend, as they'll require just houseplant soil.

Carnivorous plants must be placed in a specific Carnivorous-labelled as they naturally grow in nutrient-deficient bogs/soil. Situating an insect-eating plant in any other compost will result in yellowed foliage and inevitable death after a few days. There are no substitutes for carnivorous soil. 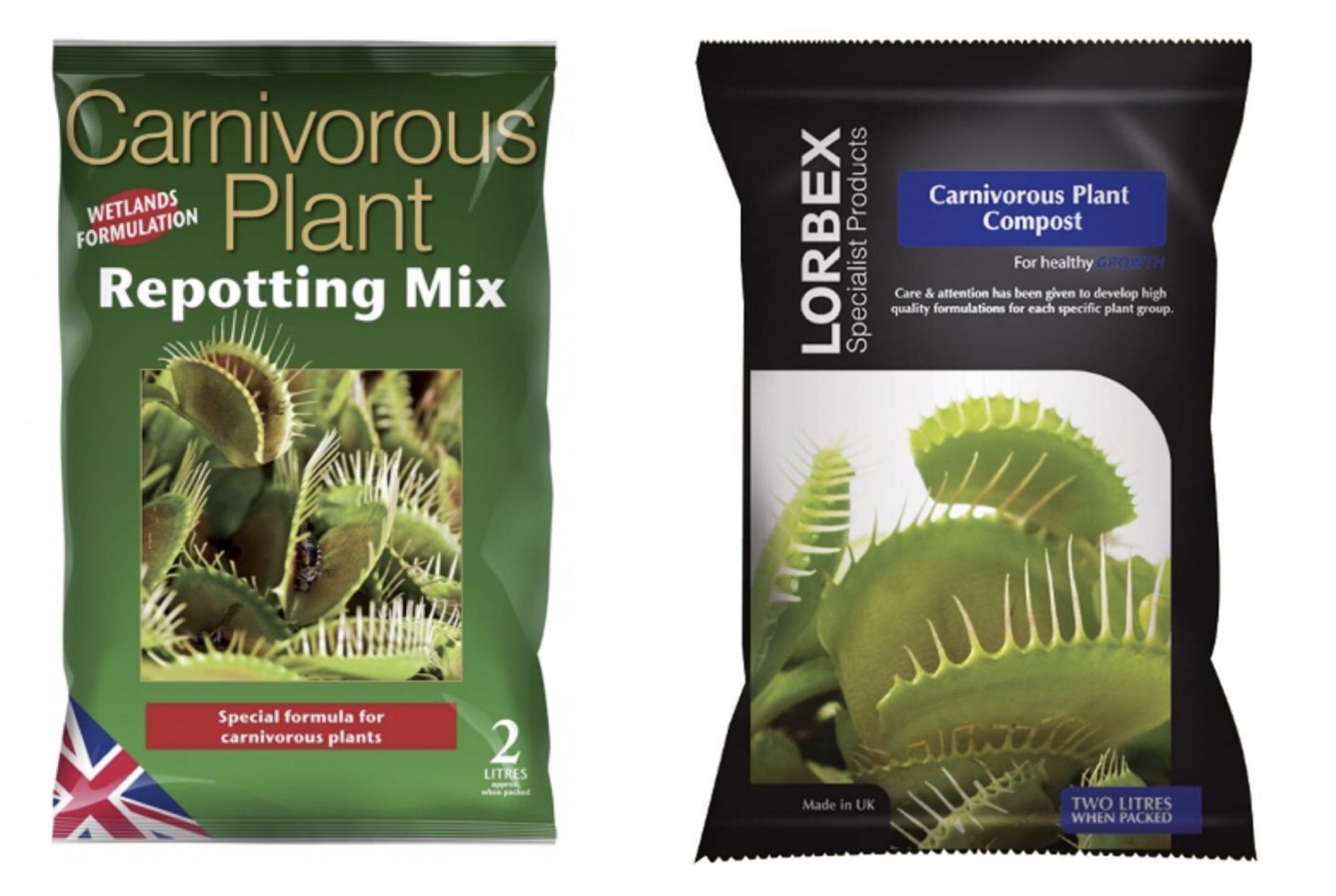