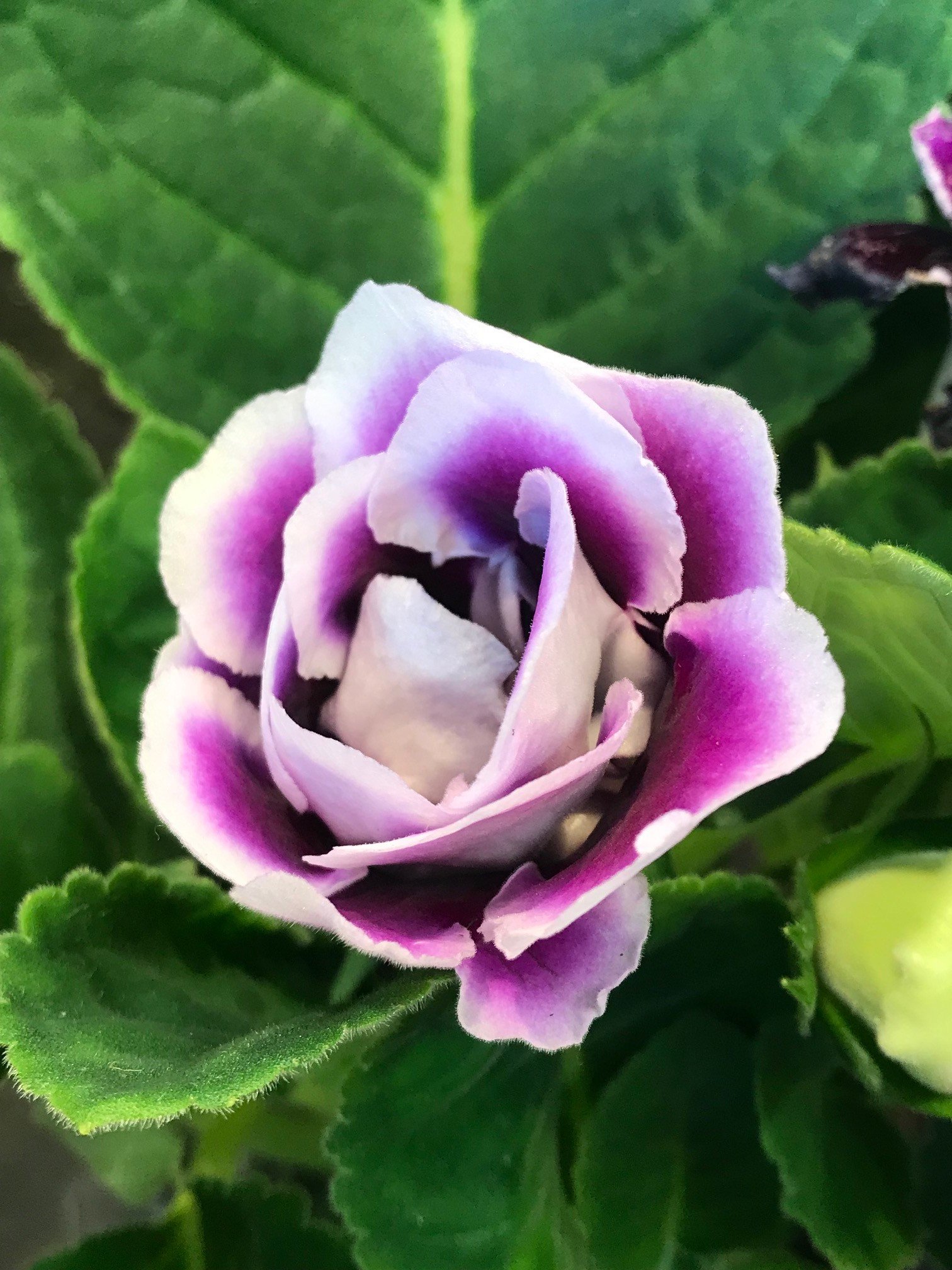 During the growing months, allow half of the soil dry out between waters, reducing this further in winter. Either use fresh bottled water, or tap water that has been allowed to sit for at least 24hrs before application. If possible, try not to use cold water as sudden temperature changes will result in a weakened plant. Irrigate using the bottom-up method. Although this isn't mandatory, saturating the foliage unnecessarily will cause fungal issues like botrytis and powdery mildew to develop in the cubbyholes of the stem or flowers. Place the Gloxinia or Sinningia on a plant saucer and fill the bottom quarter of the pot, allowing the plant to soak it thoroughly. Under-watering symptoms include rapid flower loss and dry, crispy leaves - these issues are commonly down to either forgetfulness, too much sunlight or too much heat. Even though an under-watered Gloxinia or Sinningia is far better than a soggy one, never allow the soil to fully dry out for too long as this could reduce the chance of new buds forming. Over-watering symptoms include rotting lower leaves, yellowing leaves, a loss of buds or flowers and root or crown rot. Allow most of the soil to dry out in between waters and do not allow a pool of standing water accumulate beneath the pot as failure to keep its environment relatively dry will result in plant death.

A good level of humidity accompanied by sufficient air circulation are a must. Although misting the foliage with tepid water is an excellent method to increase the local humidity on other houseplants, this should not be done with flowering specimens. Avoid wetting the foliage or flowers by introducing a humidity tray to prevent nasty diseases engulfing your plant.

A brightly lit spot with little direct sun is best; however, don't go overboard with the sunlight as this will lead to a 'washed-out' appearance. ukhouseplants would go against placing one in a dark location, as the chance of over-watering and over misting is far too high. As long as the location offers good levels of of indirect sunlight and temperature, the Gloxinia or Sinningia should thrive!

Feed fortnightly during the spring and summer, using either houseplant feed or a potassium-based feed during the flowering period; Streptocarpus Feed is an excellent choice for this period. A general plant fertiliser is acceptable too, but remember to dilute the solution by half to prevent the burning of roots.

Dry soil is a big issue when cultivating Gloxinia or Sinningias. Although they can withstand slight droughts over time, persistent dry spells will considerably weaken the plant, potentially causing death. Stunted growth and flower loss are the typical signs of under-watering; if it doesn't bounce back after severe wilting, it may spell the end of its life. Be sure to avoid direct sunlight and potentially create a schedule if you're a forgetful gardener.

Green aphids are also a common issue - small, lime-coloured critters can easily blend in with the foliage, thus leading to rapid infestations. They are most likely to infest the new foliar growth, or the flowers and stalks themselves. Each aphid can lay up to five or six eggs per day, meaning that a infestation can be imminent. The best way to prevent an attack before it becomes a threat is by keeping the windows and doors shut, with regular pest inspections. For those that have unfortunately bitten the dust, click on this link to learn about addressing these issues.

A lack of flowers is caused by a insufficient dormancy period, served in the winter months. Locations that offer near-similar temperatures all year round won't allow the plant to go dormant, resulting in poor spring growth. To achieve, situate in a location that dips to around 12°C  (54°F) with fewer waters. Allow the majority of the compost to dry out and provide a humidity tray while the radiators are operating. While we're on the subject, if you'd like to prolong the flowering period, use a fertiliser high in potassium to promote longer lasting flowers; Streptocarpus Food is an excellent choice. Other tips to extend this period are to avoid temperature fluctuations and droughts, maintain good humidity and place in a well-lit room with little to no direct sunlight.

Failed leaf-cuttings are another common issue among gardeners. Not only does the size of the leaf matter, but the time in which propagation is done can greatly affect the rooting process. Cuttings should only be taken during the spring when the plant is most active. Be sure to use leaves that are at least 8cm in diameter as smaller specimens won't have enough stored energy to re-root. Provide a location that offers a good level of humidity and air circulation; you can achieve this by placing the potted cuttings in a transparent bag. Locking in air moisture around the leaf is vital to reduce the amount of water loss caused by respiration. If the cuttings are starting to rot, this is because of not enough light, over-watering or poor air circulation which must be dealt with immediately.

Trying to re-flower a Gloxinia isn't the easiest of tasks, but those that have a cool room without artificial light at night will be on the upper-hand. Repotting isn't usually mandatory if you want it to re-bloom - in fact, this may hurt the chances. Only repot every two to three years and after the blooming has finished. To get it to flower in the spring or summer months, think back to its previous dormancy period served in the winter. The following steps should be done at the start of autumn until mid spring, when Gloxinias are in their dormancy.

Be sure to provide a bright location with no direct sunlight over the course of the year. Although the sunlight won't necessarily hurt the plant, you can easily fall in the trap of under-watering, potentially weakening the plant. In order for the Gloxinia to fully become seasoned, avoid the use of artificial lighting during the autumn and winter nights.

This is the most significant step - keep the temperature within 12 - 15℃  (53 - 59℉) throughout spring, until buds form in late summer. It'll be highly unlikely for Gloxinias to sufficiently bloom when the ambient temperatures are kept the same all year around, so ukhouseplants cannot empathise the importance of temperature.

Gloxinia is a perennial genus of three species having natural distributions in the Andes of South America. They form part of the Gesneriaceae family, that includes Streptocarpus, African Violets and Aeschyanthus. The genus was first formally described as Gloxinia in the late 1785 by Charles L'Héritier, but has been recently recently reclassified as Sinningia.

Up to 20cm in height & 25cm in width. The ultimate height will take around five years to achieve.

Via seed, the separation of basal offshoots or leaf cuttings. To learn about the essentials with sowing seeds, be sure to click on this link.

Separation of Basal Offshoots - The ideal time to divide is during the repotting period. Gently tease away some of the soil, and separate a few basal growths (established side shoots) with sections of the original root system. Get a solid, but gentle grip of the both the mother plant and the offshoot, pushing the latter's base downwards - you should hear a snap. Place the plantlet in a moist, well-draining potting mix with the avoidance of direct sunlight. Although this method is quite easy, be mindful of transplant shock and do not perform this method if the plant is displaying signs of stress.

Leaf Cuttings - This method of propagation is by far the most enjoyable, and the easiest way to identically duplicate the original plant. High levels of cytokinin found in the Gloxinia or Sinningia enable its leaves to root and produce new lateral growths along serrated wounds. Leaves that are at least 8cm long and part of an established plant are most successful. Use clean scissors and cautiously remove closely to the main stem, empathising the simpleness of the wound. Directly cut along the midrib (central column of the leaf) and place this end into the soil.

For its soil, choose a well-draining potting mix, ideally Seed & Cuttings Compost, but ordinary multipurpose with a splash of perlite is acceptable too. Place the leaf sections wound-down in around an inch into the soil, applying slight pressure around the base of the leaf for extra support. Keep the pot in a sealed transparent bag to maintain high humidity, a pivotal element for quick healthy growth. Open the bag every couple of days to monitor how the cuttings are performing and to check if the soil needs watering. If propagation is successful, you should start to see new shoots surfacing the soil line after 6 - 8 weeks. Keep growing conditions moist and always avoid direct sunlight - do not let the soil thoroughly dry out or become waterlogged. Once the shoots are big enough to pot on (3 - 5 leaves on each growth), they may be potted up in Houseplant Compost or another well-draining potting mix in 8cm pots. Repot as necessary and care in the same way as adult specimens. 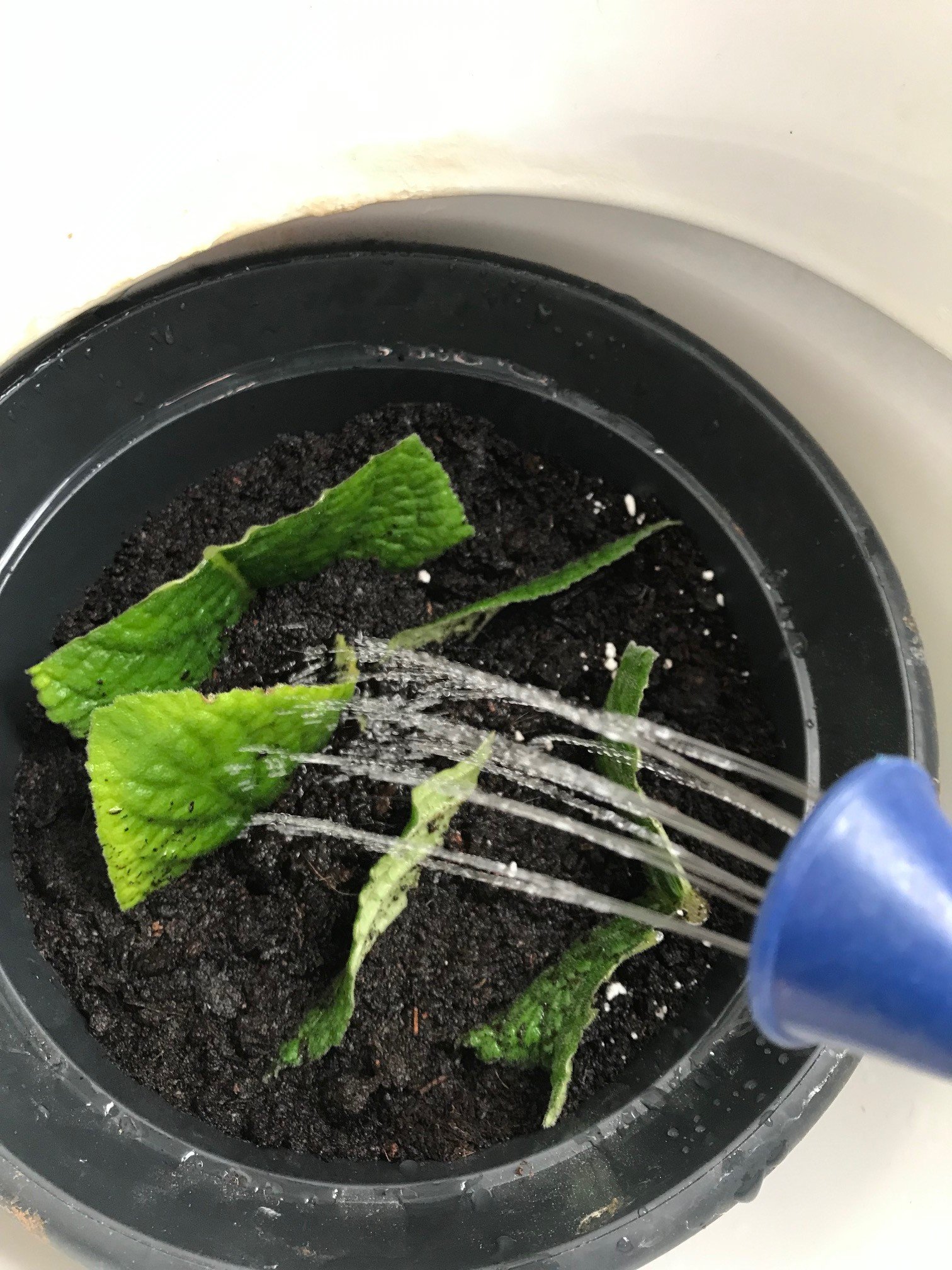 Leaf cuttings of a Streptocarpus. This method of propagation can be easily applied to Gloxinia.
Flowers

Gloxinia are perennial, with flowers typically appearing around May to October, but can bloom in any season. The individual flower can last up to six weeks, whereas the overall show can last several months. It's heavily important not to allow moisture to sit on the flowers' cubbyholes, as botrytis petal blight is a serious threat among Violet growers.

Every two or three years using a well-draining potting mix, for example, Streptocarpus Compost. Houseplant Soil is acceptable, but try to add some perlite, sand or grit to the medium for extra drainage. For matured specimens, introduce more grit to promote a stronger root ball; click on this link for more information on how to perform the perfect transplant.