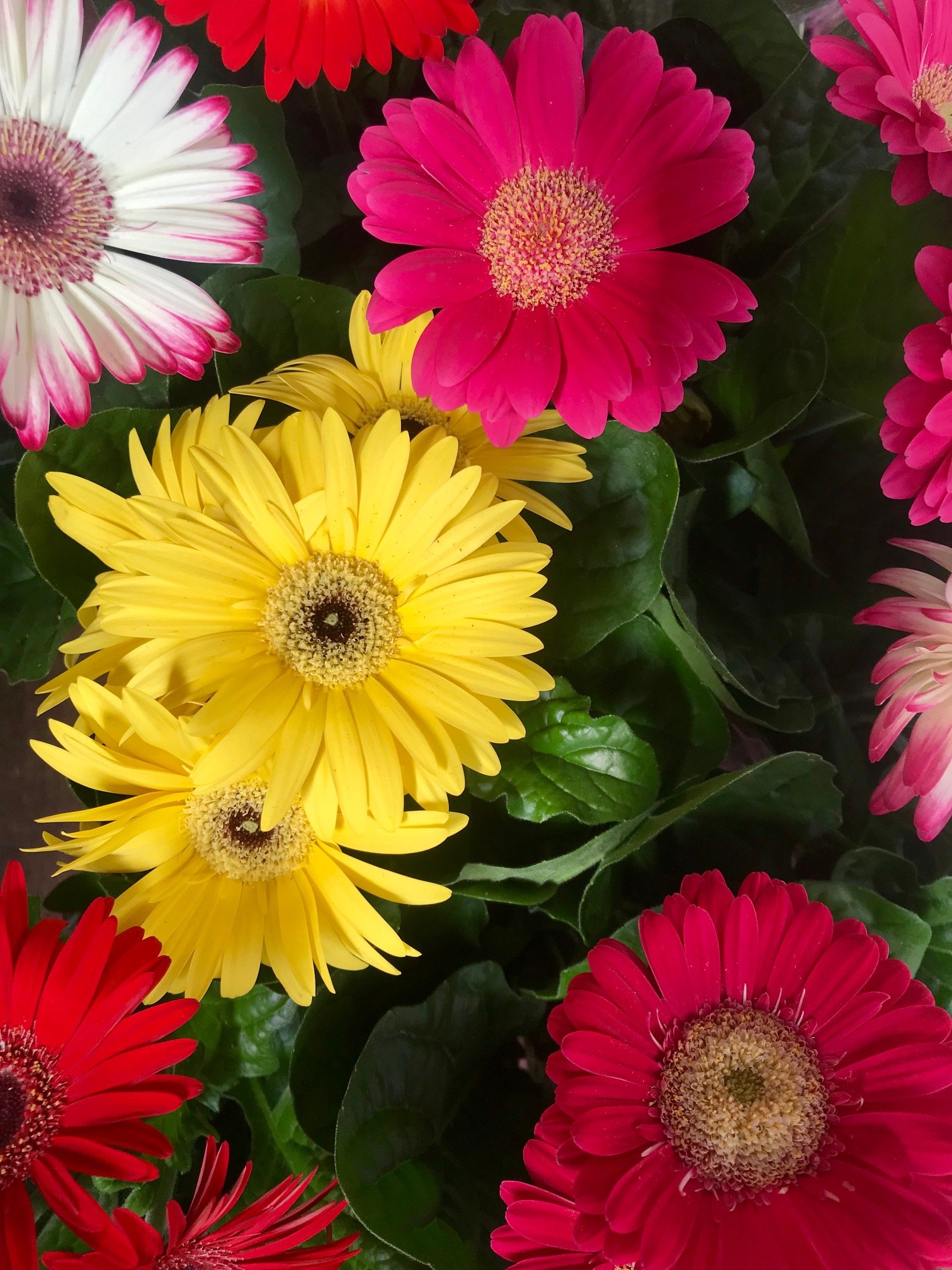 A location with little to no direct light is the ideal setting for this species. Shady locations must be avoided at all costs due to the heightened chance of over-watering and basal rot (when watered from above). If you're worried about its location being too dark, if a newspaper can be read while having your back towards the light source, you'll be good to go.

In terms of the ideal room around the house, as long as the desired location is above 15ºC  (59ºF)  and is at least four metres away from an operating heat source, it should be accepted. A north, east or west-facing windowsill is great, but try not to place it in direct sunlight where a chocolate bar would melt.

Allow the pot to feel slightly light when lifted before rehydrating its soil. Always keep in mind that over-watering is the number one issue with Gerbera, so it's vital to keep the specimen slightly on the drier side to life. Only hydrate the plant using the bottom-up method, as splashing the flowers and leaves will result in diseases such as Botrytis Petal Blight, southern blight and basal rot. Place the plant on a saucer one water around a quarter deep, until thorough absorption. You may have to repeat this twice a week if needs be, especially with those grown in bright, warm locations. Under-watering symptoms include rapid flower loss and dry, crispy leaves - these issues are usually due to either forgetfulness, too much sunlight or too much heat. Even though an under-watered Gerbera is far better than a soggy one, never allow the soil to thoroughly dry out for too long as this could reduce the chance of new buds forming. Over-watering symptoms include rotting lower leaves, yellowing leaves, a loss of buds & flowers and root or crown rot. Allow most of the soil to dry out in between waters and prevent a pool of standing water accumulate beneath the pot. If yours has developed basal rot and grey mould across its soil, the likelihood is that the specimen will collapse within a few days and therefore should be discarded.

We'd recommend fertilising your specimen once every two to four weeks in the spring and summer, and monthly thereafter using a 'Houseplant' or 'Streptocarpus' labelled feed. A general plant fertiliser is acceptable too, but remember to dilute the solution by half to prevent the burning of roots.

Provide a bright, and cool autumn and winter period around 15℃  (59℉)  to reinforce its dormancy. Keep the roots pot-bound to add further stress onto the specimen, which in turn will heighten the chance of flowering. Blooms will generally appear in the spring and summer months, during active growth.

The following steps should be taken from early autumn until the end of winter.

Be sure to provide a bright location with no direct sunlight; those kept on a north, east or west-facing window is most happy. Avoid deep shade and the use of artificial lighting at night or locations that boast temperatures higher than 18℃  (64℉).

During the autumn and winter, fertilisation should be performed at monthly intervals with a 'Houseplant' or 'Streptocarpus' labelled feed. While the flowers are budding or in bloom, use a Tomato fertiliser to provide fortnightly nourishment of potassium.

This is the most significant step; reduce the temperature down by around 5℃ compared to the summertime or place in a room that's between 14º - 17℃  (57º - 62℉). You'll be at a significant disadvantage if the ambient temperature is kept constant throughout the year, as Gerbera will only respond in locations that have daily fluctuations of around 5℃. Never exceed the minimum temperature as it may lead to plant death or yellowed foliage at a bare minimum. If these steps are followed successfully, you could see a show of blooms in the following summer - but remember, dealing with nature may not always provide the results you'd relish.

Over-watering is the biggest issue, with typical signs of this include brown leaves with soft spots on the underside of the leaves, basal/crown rot or powdery mildew forming in the centre. Not only do you have to be mindful of these problems, but also have a think about which plant parts to keep dry. Its central crown must also remain dry at all times to prevent the development of basal rot or mildew. Avoid waterlogging; there's no point fulfilling the ukhouseplants' phrase, 'drenches in between near-droughts' if the base of the pot is submerged, as root rot will arise. For any more information about over-watering related issues, be sure to click on this link.

Too much sunlight will lead to sun scorch, with typical signs including browning or crispy leaves, dry leaf-edges, sunken leaves or stunted growth. Although too little light will cause over-watering issues, too much sunlight will negatively affect the plant as well. A location that offers over two hours of sunlight a day will bring the optimum growth for the Gerbera. If yours has fallen short of this issue, reduce the amount of sunlight considerably and always be mindful of environmental shock (when too locations offer too different growing conditions). Remove some of the affected leaves and increase irrigations slightly. Only hydrate the plant using the bottom-up method.

Gerbera is a perennial genus consisting of thirty-eight species, originating from central Swaziland - now known as 'Eswatini'. The genus was discovered by Harry Bolus in 1889 who named it in honour of German botanist and doctor, Traugott Gerber.

Did you know that Gerbera came third in NASA's Clean Air Study back in 1989? They introduced unnatural amounts of benzene, formaldehyde, and trichloroethylene into an enclosed environment to see if thirty-three tested plants can naturally remove them from the surroundings. Lady Palms, Parlour Palms, Peace Lilies & Chrysanthemums came out on top, along with the Gerbera, removing all of the toxins and even others such as ammonia and xylene! 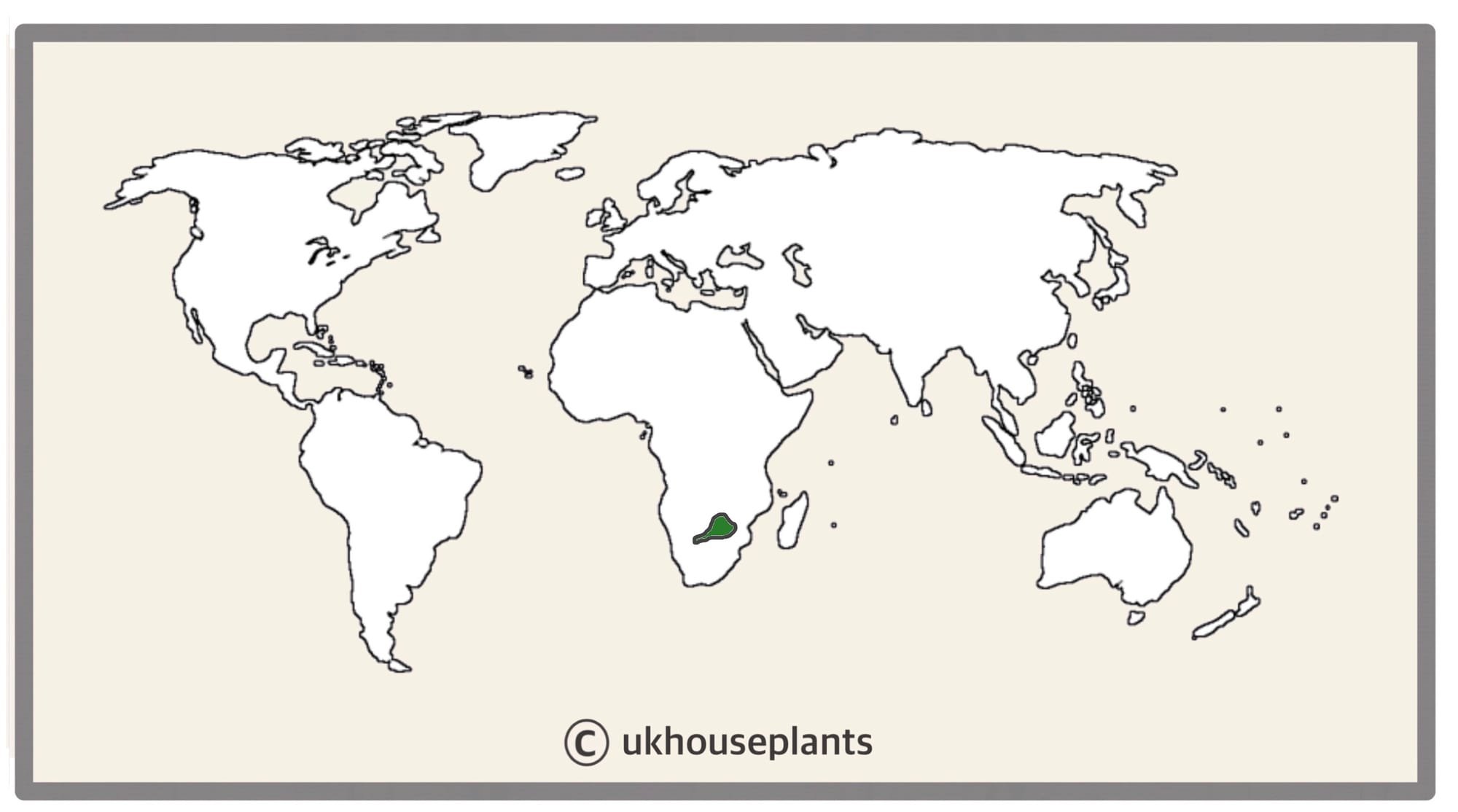 The Distribution of Gerbera jamesonii.

5° - 25°C   (41° - 78°F)
H1c (Hardiness Zone 11) - Can be grown outdoors between late spring and summer throughout most of the UK while nighttime temperatures are above 8℃  (46℉).  If you decide to bring the plant outdoors, don't allow it to endure more than an hour of direct sunlight a day as it may result in sun-scorch. Regularly keep an eye out for pests, especially when re-introducing back indoors.

Basal Offset Division (Easy) - The ideal time to divide is during the repotting period. Gently tease away some of the soil, and separate a few basal offsets which have its own root system. Place the plantlet in moist 'Houseplant' compost and be sure you don't submerge its leaves or basal cubbyhole into the soil. Keep the soil relatively moist and place it in a bright, indirect location to avoid the risk of dehydration (a common trait of death). This method can be relatively straightforward; however, be mindful of transplant shock, whereby its root systems are severely over-touched, which may result in excessive wilting.

Gerbera are a tender perennial, meaning that as long as the temperature doesn't dip below 5°C, it should rebloom in the following spring or summer. The genus can be split in four groups, based off the flowers' morphology - single, double, crested double and full-crested double. The primary difference between the groups is to do with the amount of petal rows on each flower head. For reference, the most common Gerbera, the G. jamesonii, is a single-crested flower.

Did you know that the Gerbera is the 5th most cut flower in the world; narrowly being out-placed by Chrysanthemums, Roses, Carnations and Anthuriums?

Repot every three years in spring using a 'Houseplant' labelled potting mix and the next sized pot with adequate drainage. Gerbera are far better potbound for several years due to the heightened risk of root rot and repotting-issues (like transplant shock), so only repot if you feel it's wholly necessary - restricted root growth will also increase the chance of blooms, too.

Keep an eye out for mealybugs, aphids, fungus gnats & root mealybugs that'll locate themselves in the cubbyholes and undersides of the leaves, with the exception of the latter in soil. Common diseases associated with Gerbera are root rot, leaf-spot disease, Botrytis, rust, powdery mildew & southern blight - click here to learn more about these issues.

Some Florists & Online Stores may sell Gerbera during the spring and summer, along with garden centres stocking them outdoors. It's not advised to bring outdoor plants inside as this could lead to environmental shock and the risk of introducing pests into the home.