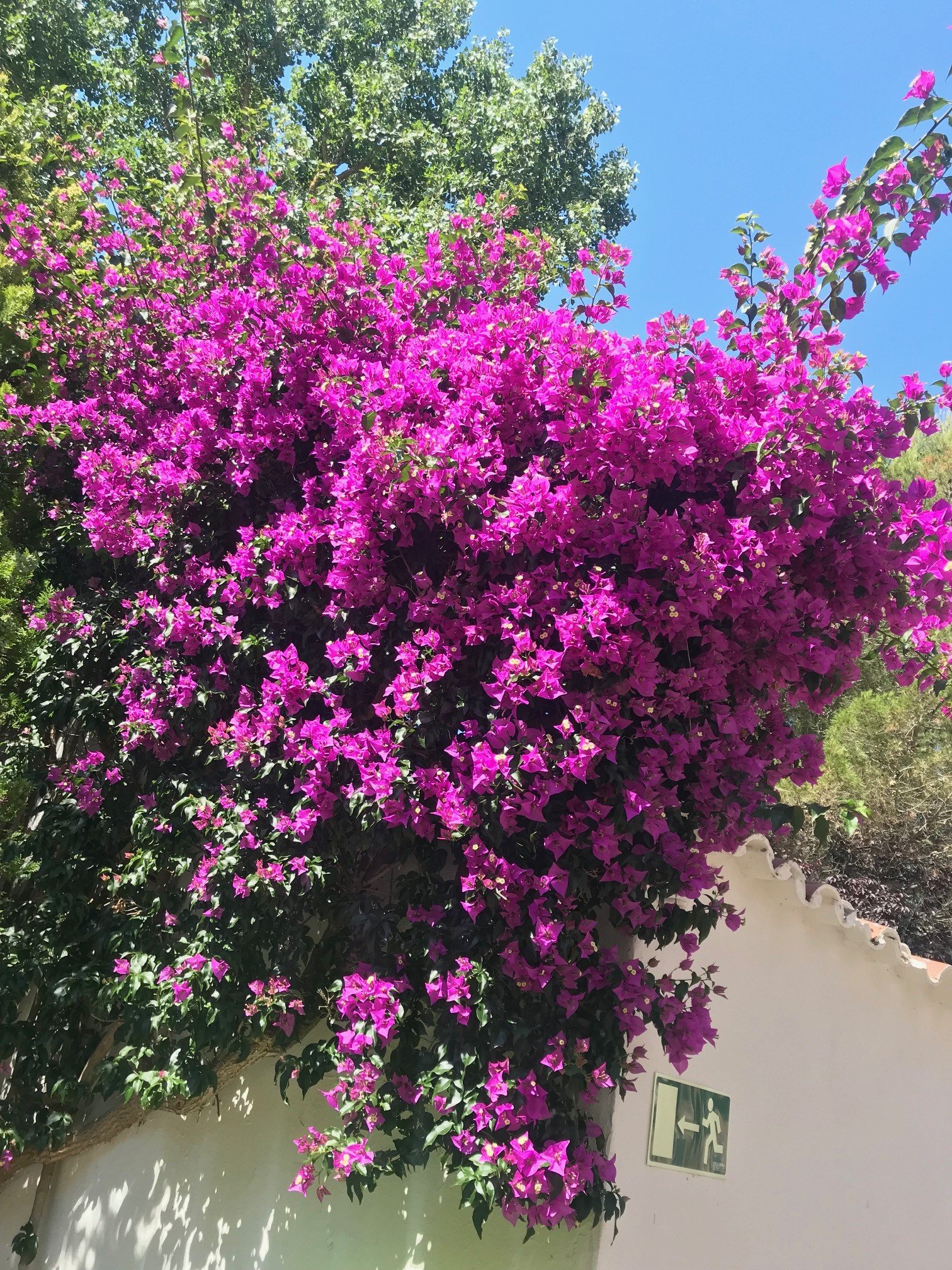 Allow half of the soil to dry out in between irrigations, avoiding persistent droughts whilst the plant is in bloom. During the colder months, reduce this even further, to around once every two weeks. Bougainvillea grown in darker locations must be watered far less than with those grown in brighter spots to counteract the chances of root rot. Their root systems are super sensitive to temperature change, so applying cold water will weaken the plant over time. If you do decide to use tap water (instead of rainwater collected from outside or fresh bottled water), allow it to stand for at least 24hrs to eliminate the ironised chemicals. Under-watering symptoms include rapid flower or foliar drop, stunted growth and dry crispy leaves; these issues are usually due to either forgetfulness, too much sunlight or heat. Over-watering symptoms include rotting lower leaves or flowers, yellowing leaves, a loss of buds or flowers and root rot. Allow most of the soil to dry out in between waters, and do not allow a pool of standing water accumulate beneath the pot, as failure to keep its environment relatively dry will result in the diseases stated above.

Average humidity found in a conservatory will do perfectly. Avoid misting the flowers as excess moisture left on the intricate bodies will cause botrytis petal blight. Go against placing one in a frequently used bathroom because of the combination of moist air and potential air circulation issues, could entice powdery mildew into play.

A sunny location with a few hours of sunlight is perfect for growth. Leaf and flower loss will occur when a Bougainvillea is situated in a too dark setting. In terms of a place around the house, a location within two metres of a south-facing window or conservatory are ideal. Do not situate one within three metres of an operating radiator or in a location that doesn't offer bright light.

Whilst the plant is budding or in bloom, supplement fortnightly with a potassium-based feed - Tomato or a 'Flowering Plant' fertiliser is best. As soon as the last flower has elapsed, revert back to a general plant food at monthly intervals throughout the year. Do not directly apply 'Ready to Pour' liquid without a pre-water beforehand, as this will lead to the burning of roots.

A lack of flowers in the summer or autumn is caused by a insufficient dormancy period, served in the winter months. Locations that offer near-similar temperatures all year round won't allow the plant to go dormant, resulting in poor spring growth. To achieve, situate in a location that dips to around 10°C  (50°F)  with fewer waters. Allow the majority of the compost to dry out and provide a humidity tray while the radiators are operating. While we're on the subject, if you'd like to prolong the flowering period, use a fertiliser high in potassium to promote longer-lasting flowers; Streptocarpus or Tomato Food are excellent choices. Other tips to extend this period are to avoid temperature fluctuations and droughts, maintain good humidity and place in a well-lit room with little to no direct sunlight. Read-on to find out how to get a Bougainvillea to reflower.

Yellowing lower leaves could be the result of over-watering, too little light or nutrient deficiency. Allow the top half of the soil to dry out in between irrigations for the reduced chance of root rot. If the desired location is so dark that you can't even read a newspaper, it'll be too shady for the plant, too. The last possibility could be to do with the lack of nutrients in the soil. If you haven't supplemented it in a while, it could be to do with nitrogen deficiency. This element is mobile within the plant, meaning that it can be moved to where the plant needs the most - i.e. the new growth. A lack of nitrogen in the lower leaves will result in the chlorosis, so it's vitally important to keep the soil nutrients topped-up.

A dehydrated plant will result in the majority of the leaves turning yellow, caused by under-watering and/or too much sunlight. Although Bougainvillea need a sufficient amount of sunlight per day, too much will result in detrimental issues. A few hours of summer sun, or over five hours of winter sun is the recommended dosage. Try not to exceed these limits as it'll take many months for the plant to bounce back from sun-scorch.

Sudden flower or leaf loss could be an array of different cultivation issues; the amount and frequency of irrigations could be to blame, as well as droughts, draughts and heat sources being the culprit. Never allow the soil of a Bougainvillea to thoroughly dry out whilst in flower. Situating it in full sun all-day with persistent droughts will quickly cause the foliage to curl and potentially drop off in quick succession. The final reason could be due to a fluctuation of either the surrounding temperature or humidity. Although average air moisture is more than acceptable for a Bougainvillea, do not over-mist the foliage as this will only elongate the fluctuations - if you're worried about this issue, try introducing a humidity-tray. While we're on the topic of surrounding air moisture, try not to place the plant within four metres of an operating radiator as this too could cause issues!

As mentioned before, powdery mildew and botrytis are major threats among heavy foliage plants due to the compact nature that aids the spread of the diseases. Watering above the foliage will allow excess moisture to sit in the cubbyholes of the stem, enticing harmful bacteria to thrive. Typical symptoms of powdery mildew are a thin layer of white powder-like substance forming on the foliage or flowers. In contrast, botrytis petal blight looks largely similar to the mildew, except that it usually accompanied by yellow leaves and small dark spots developing on the flowers.

Short-lived flowers could be the product of low humidity. Place the Bougainvillea on a humidity/pebble tray, keeping the reservoir topped up with water throughout the winter - artificial humidifiers aren't necessary in the summer months. Other ways to increase the surrounding moisture are to situate in a bathroom, or at least three metres away from an operating heat source. Never mist the flowers due to the high risk of developing botrytis. 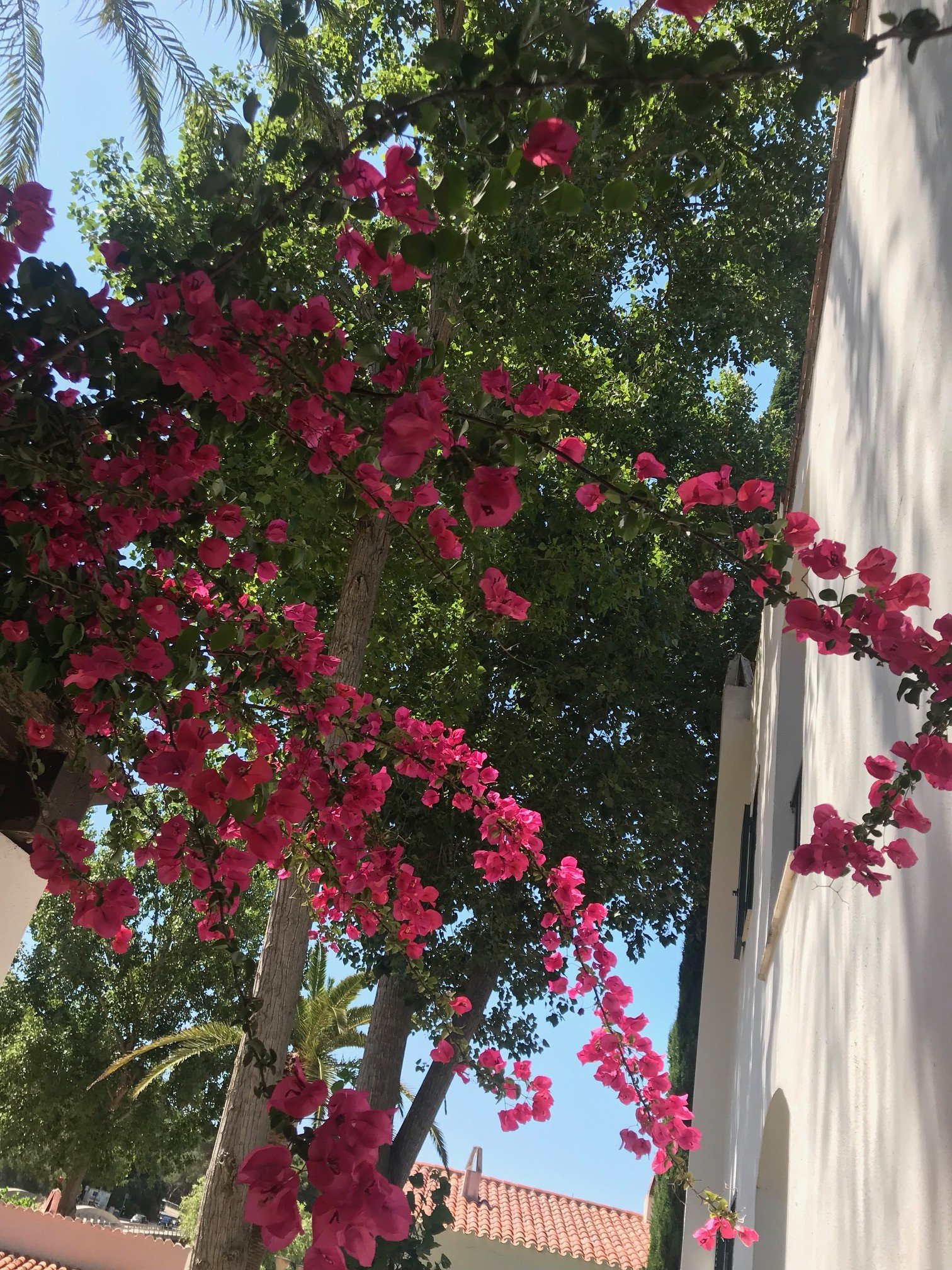 A good dormancy period served over the winter months will greatly increase the chance of flowers in the summer or autumn. Reducing the amount of water, feed and temperature will help ensure the plant has a 'resting period', to produce better quality growth in the following season. Here's the ukhouseplants' acronym, SHORT, that'll guide you through the vital stage of a plant's yearly cycle. The following steps should be done in winter and early spring when the plant slows down growth.

Be sure to provide a bright location with much sunlight and avoid the use of artificial lighting during the night. Do not situate this plant in a dark location as it could result in excessive leaf-loss.

Reduce hydrations so that the soil begins to dry for a couple of days. Avoid over-watering and the use of cold water for best results.

While it's bloom, try to use a 'Flowering Plant' or Tomato fertiliser. During the dormancy period, only supplement once or twice to carry through until the following spring. Shortly before the start of bud growth in late-spring, use a fertiliser high in potassium to increase the chance of flower development.

This is the most significant step - reduce the temperature down by around 5℃ compared to the summertime or place in a room which is within 10 - 15℃  (50 - 59℉).  Do not exceed the minimum temperature for tender Bougainvillea as this could lead to plant death. This section is the most crucial element to a successful bloom. Without a cooler environment during the dormancy period, your plant won't fully winterise, thus leading to a poor show of flowers in the following season.

There are between four and eighteen species of Bougainvillea that originate from Peru to Brazil. The genus was first described by Philibert Commerçon, a botanist who joined the French Navy admiral, Louis Antoine de Bougainville, on a trip to the Americas in the late 18th century.

10°C - 25°C   (50° - 78°F)
H1c - can be grown outdoors in spring and summer in a sheltered location, but is fine to remain indoors. If you decide to bring this houseplant outdoors, do not allow it to endure more than an hour of direct sunlight a day as this will burn the leaves. Regularly keep an eye out for pests, especially when re-introducing it back into the home. Do not exceed the minimum temperature threshold as irreversible damage will occur in the likes of yellowing leaves and foliage decline.

When grown indoors against a trellis, they'll grow up to 3m in height and 3m in width. The ultimate height will take between 4 - 6 years to achieve.

Remove yellowed or dying leaves and plant debris to encourage better growth and improve the all-round appearance. Pruning must be done with clean scissors or shears to reduce the chance of bacterial and fungal diseases; remember to make clean incisions as too much damage can shock the plant. Prune leggy growth to promote a bushier appearance and remove spent flowers or plant debris to reduce the likelihood of diseases. During the spring months, hard-pruning is advised for bigger, better blooms; be careful not to damage the new buds that'll form in summer.

At the start of the season, train the the loose vines along a trellis that's twice the height of its pot. Once the first set of bracts (think of the tops of Poinsettias), prune back to promote a second set. Younger specimens tend to respond better than older plants.

Via seed, stem cuttings or division. To learn about the critical essentials with sowing seeds, be sure to click on this link - Seed Propagation Tips.

Semi-Ripe Stem Cuttings - Choose the healthiest, most established stems that are wooded, but still juvenile enough to slightly bend. This propagation method can be taken from spring to late summer, using between three to five leaves. Cut directly below a node using a clean knife to reduce bacteria count and remove the bottom leaves, along with the edges of the remaining leaves for the reduction of moisture-loss in the leaves. Set the cuttings into a well-draining potting mix, dipping the wound in rooting hormone and placing slightly diagonally. Blackleg can occur when the bottom wound becomes infected, typically caused by water-logging or a too-damaged wound. Avoid direct sunlight and offer good humidity and temperature (15°C+) for success. It's recommend to place the cuttings in a clear plastic bag to lock in the soil moisture and regulate a stable level of humidity.

Most Bougainvillea will flower between the months of summer or autumn, lasting several weeks or even months. The flowers are diamond shaped, laying just above the foliage line to attract airborne pollinators. They have a vanilla-fragrance that can be smelt from metres away.

Common diseases with Bougainvillea are root rot, powdery mildew, leaf-spot disease, botrytis petal blight and powdery mildew. Keep an eye out for spider mite, thrips, aphids & mealybugs. For more info on how to address any of these issues, hit this link.  Identifying Common Houseplant Pests & Diseases

Some florists & Online Stores. Specimens are likely to be found in summer outside at most garden centres; it's not advised to bring outdoor specimens inside as this could lead to environmental shock and introducing foreign pests into the home.