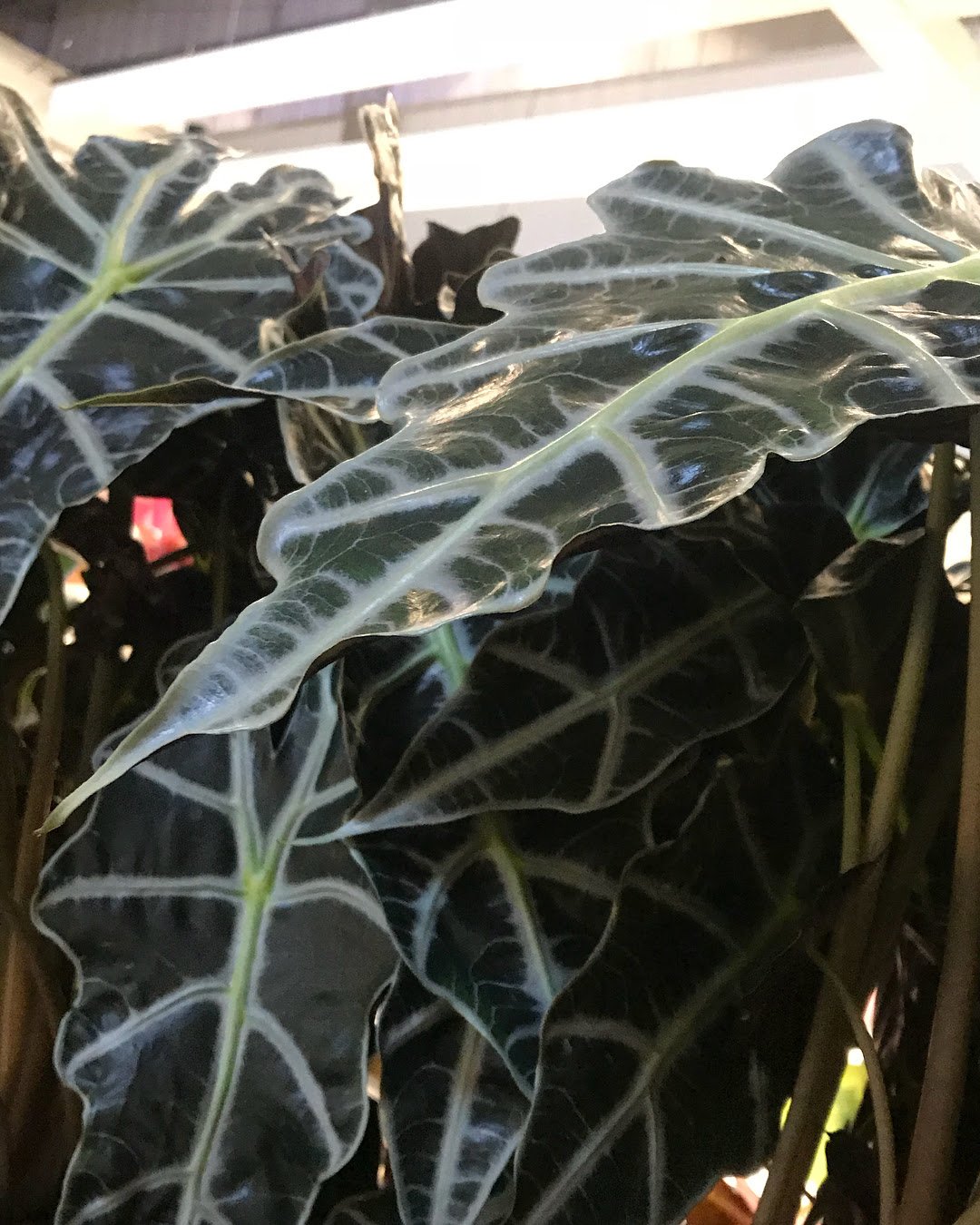 Allow around a third of the soil dry out in between irrigations during spring and summer, with monthly waters in the colder months. Use tepid water if possible; many houseplants' root systems are super sensitive to temperature change, so don't get caught out by this as it could result in yellowing leaves. Under-watering symptoms include wilting, little to no growth and greying leaves - these issues are commonly down to too much light/heat, or forgetfulness. Alternatively, over-watering symptoms include rapidly yellowing lower leaves, wilting (root rot), brown spots on leaves, and a rotten stem. Do not situate an African Mask Plant in dark locations with much water as root rot and leaf spot disease will quickly arise. For more information on how to address this issue, hit the link below.

African Mask Plants originate from South East Asia, meaning high humidity is mandatory for quality growth. Mist both sides of the leaves once a week in summer and twice in winter; browning leaf-tips are a big sign that the surrounding air moisture is too low. A quick hose down once a month will hydrate the leaves, eliminate dust particles and help reduce numbers of pests, most notably spider mite.

Although bright, indirect sun is ideal, throw in some morning or evening sun if possible. If it's situated in a shady location, dust the leaves from time to time to improve light-capturing efficiency. Never allow it to sit in strong sunlight for extended periods, as too much light will result in a pale, washed out appearance with possible brown patches forming on the leaves.

Twice a month in the growing period and monthly in winter to replicate its dormancy period. Either use houseplant feed or a general plant fertiliser at half strength. Never apply 'ready to pour' feed without a quick drink of water beforehand as this will cause the roots to burn.

Regular irrigations are key. Periods of droughts will quickly slip the Alocasia back into its dormancy period, causing stunted growth and a bewildered plant owner. If it hasn't repotted in a while, there may be too many roots and not enough soil to retain moisture, thus leaving the soil to dry out quicker. Click on this link to learn more about a transplant.

Yellowing lower leaves (closest to soil) are a clear sign of over-watering, usually caused by too little light. Although Alocasia can do well in darker locations, the frequency of irrigations must be reduced to counteract the chance of root rot. People don't realise that a plant's root system needs access to oxygen too; when soil is watered, the air will travel upwards and out of the potting mix. A lack of accessible oxygen for the roots will cause them to subsequently breakdown over the oncoming days. Click on this link to learn more about root rot and how to address it, and always feel the pot's weight for confirmation (heaviness = good soil moisture, & vice versa). 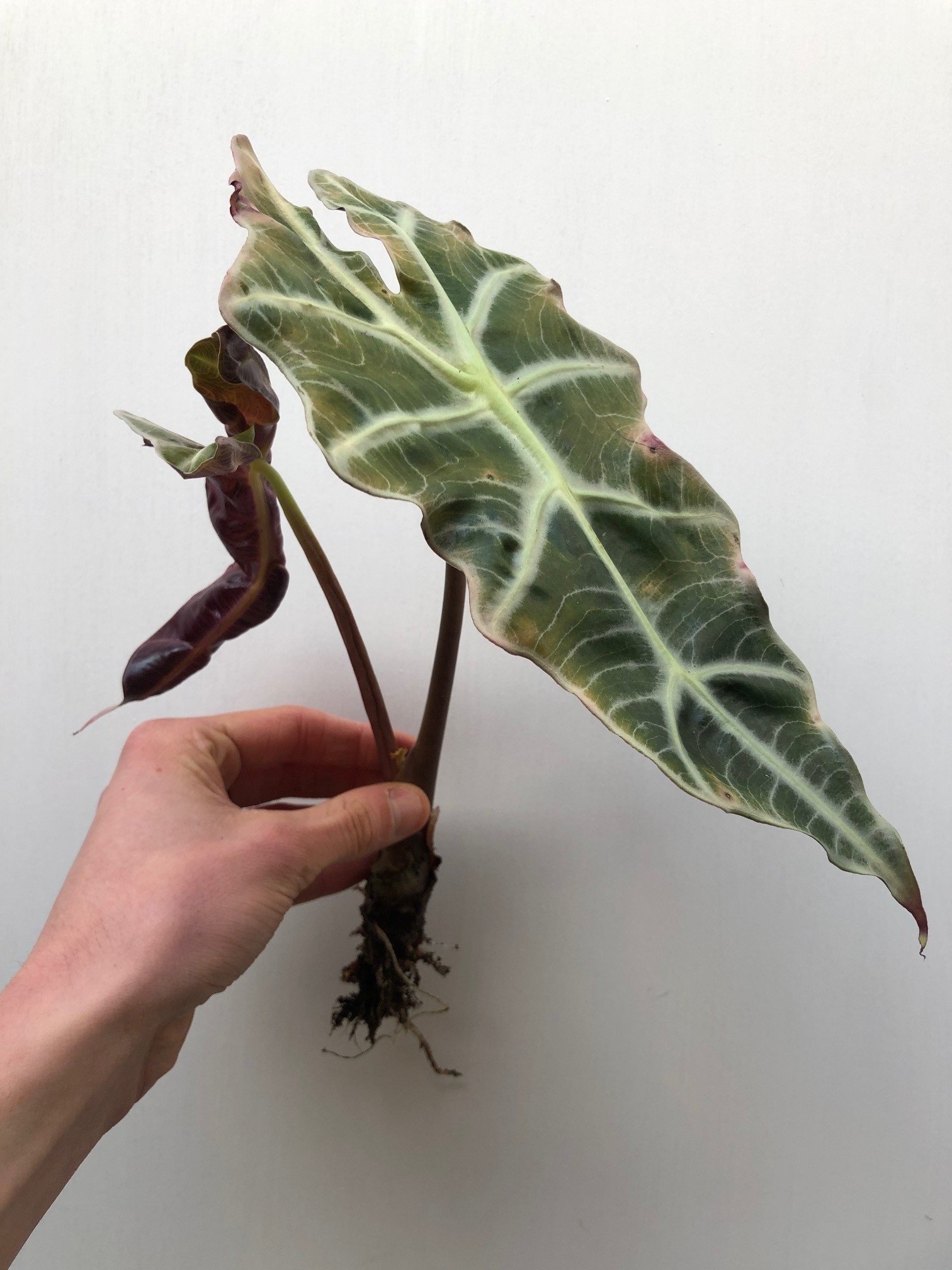 Root RotToo low humidity can cause browning leaf tips with yellow halos. Although this won't kill your specimen, you may want to increase the local moisture to prevent the new growth from adopting these symptoms. Mist or rinse the foliage from time to time and create a humidity tray whilst the heaters are active to create a stable environment for your specimen.

Dust the leaves regularly. Although this isn't too much of an issue, a build-up of dust particles can clog up the plant's pores, causing lowered light capturing-efficiency. Wipe the topsides of the leaves down once a month to keep levels down and improve growing conditions.

There are several species of Leaf-Spot Disease, (Graphiola, Botrytis, Anthracnose & Cercospora) and all of them operate in the same way. Fungi spores will land on the leaf's surface and will slowly develop along with the plant. Unfortunately, as there aren't any products that'll address the issue head-on, you can only remove the affected areas and regularly wash the leaves to limit the spread. In some cases, however, the small yellow spots are caused by inconsistent soil moisture, and is not the direct product of a disease. Think about your own cultivation habits and make a decision of what to do. If you're still unsure afterwards, don't hesitate to send us an email or direct message via our Instagram page for our expert advice! 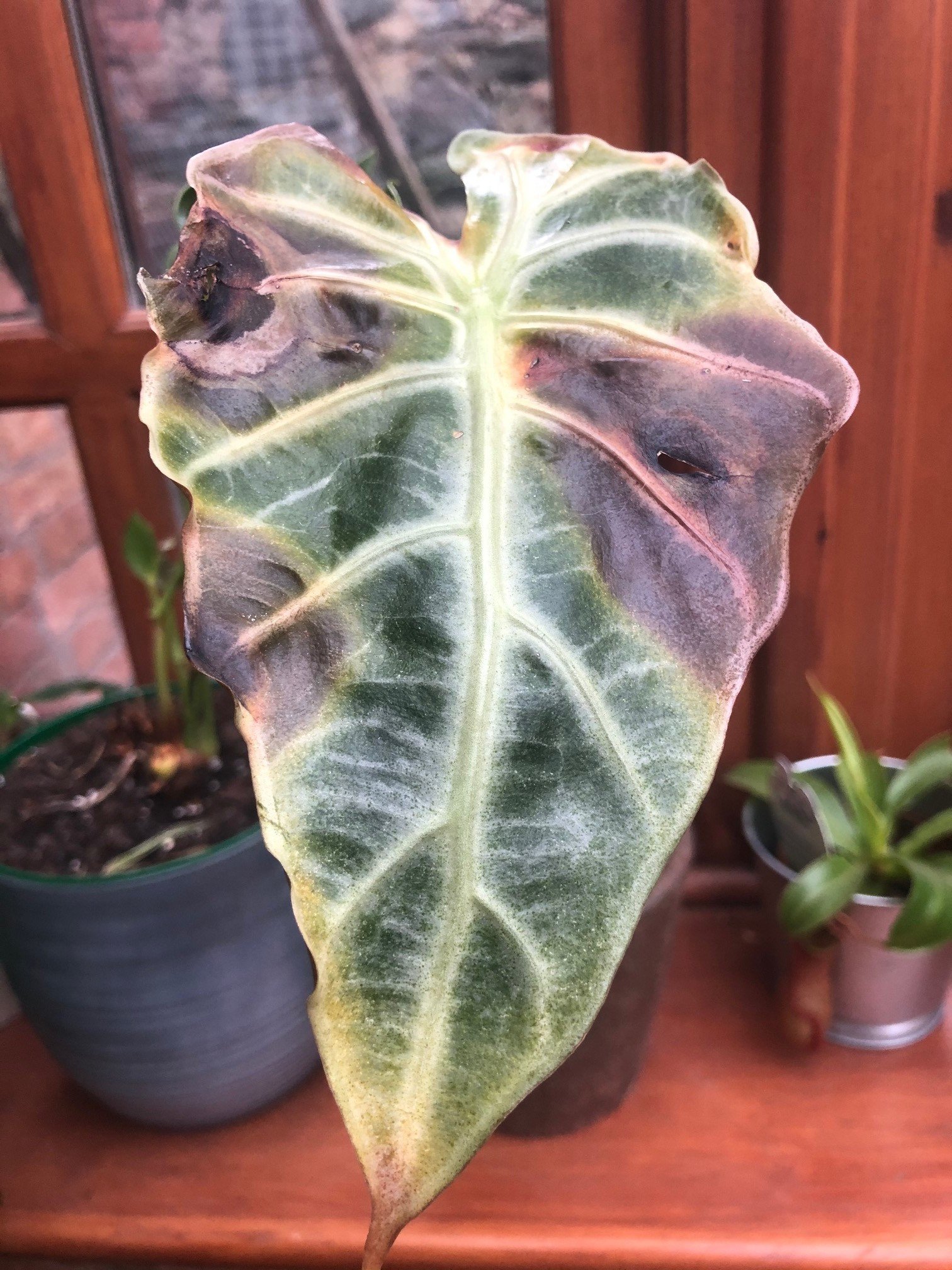 This is caused by fertiliser root-burn.

Other Yellowing leaves - it's difficult to accurately pinpoint why this is happening as it could be due to many different reasons. If the lower leaves are yellowing in quick concession, it could be over-watering. Do not allow the soil to become soil or waterlogged; failure to do so will cause root rot and possible death. For severe cases, take the plant out of rot pot to examine for root rot - a transplant may have to be performed. The second reason why its leaves are yellowing could be due to either too much sunlight or not enough water. As mentioned above, under-watering can cause an African Mask Plant to slip into its dormancy period, but persistent droughts with direct sunlight will cause further damage in the likes of yellowing leaves, stunted growth and wilting.

There have been many arguments over the similarities between the Poly and Amazonica variants. The only visual difference between the two us that the latter is slightly bigger. Some lean towards the idea that they are the same plant and others with the view that they're different due to the chromosomes. If 'Alocasia polly' is searched on the web, you'll be surprised to find that the original name for this hybrid was the A. poly with only one 'L'. This refers to their polypoid nature, although this was later proved wrong, thus strengthening the ideology that the A. amazonica and A. poly could indeed be the same plants.

The arguments over the taxonomy of the two doesn't end there; the A. amazonica isn't actually from the topics of Brazil; neither is it the actual name of the plant. The term 'Amazonica' can be traced back to the 1950s in Miami when a man named Salvador Mauro created the hybrid in his garden centre named 'Amazon Nurseries'. There have been many arguments over the correct name of the species in question due to the many hybridised versions that have been created; it was only the potentially incorrect 'Amazonica' that remains today. Although the adopted name is traced back to the 50s, it was in fact, the Chantrier brothers who crossed an A. longiloba (previously called A. lowii) and an A. sanderiana to create the hybrid that we know and love today. The name? Alocasia × mortfontanensis, named after the French village, Mortefontaine where the brothers were based.

Unfortunately, it doesn't entirely end there, either! Some botanists still argue that the two are different species, as the latter sports slightly bigger leaves. As well as this, the original name of the A. sanderiana could be called an A. watsoniana, a name that is now considered a synonym and not an individual hybrid. Because of all this intertwined commotion of different names and scientific taxonomy, it's become a tricky situation to resolve fully. Who knows what's actually happened over the 130 years, but one thing for sure, you wouldn't imagine horticulture being this controversial!

10° - 30°C   (50° - 86°F)
H1b - can be grown outdoors in summer in a sheltered location, but is fine to remain indoors. If you decide to bring this houseplant outdoors, do not allow it to endure more than an hour of direct sunlight a day as this will burn the leaves. Regularly keep an eye out for pests.

Over 0.7m in height and 0.5m in width once they reach maturity. The ultimate height will take between 5 - 10 years to achieve.

Via seed or Corm Offset Division.

Corm Offset Division - Your plant will produce several basal offsets that can be separated once they have a sufficient root system, and surpass 25cm in height. If possible, water the soil 24hrs before the main event to reduce the risk of transplant shock, when its dry root systems are over-fingered. Take the plant out of its pot and place your fingers close to the nodal junction - soil may have to be removed for better access. Push the chosen offset downwards until you hear a snap. Separate the foliage and its root system away from the mother plant, mentally noting the high risk of damage. Transplant in the appropriate sized pot with a fresh batch of houseplant soil. Maintain evenly moist soil and situate it in a bright, indirect location away from any direct sunlight. After eight weeks, treat it like a normal specimen following the care tips above!

As African Mask Plants are part of the Araceae family, their flowers aren't showy. Much like a Peace Lily's flower body, their flowers consist of a white or green spathe (the spoon-like shell) with the spadix being the site of pollination. Blooms can last up to five days and is usually visible during late spring or early summer around 30cm+ from the soil line.

Repot every two years using Houseplant Compost and the next sized up pot. For matured specimens, introduce more grit to promote a stronger root ball; click on this link for more information on how to perform the perfect transplant.

African Mask Plants are susceptible to leaf-spot disease, botrytis & root or rhizome rot. Keep an eye out for aphids, spider mite, & mealybugs under the leaves, most notably along the midrib (central underside column). Click here for more information about how to identify and address any of these issues.

Members of the Araceae family typically contain poisonous calcium oxalate crystals, with African Mask Plants being no exception. Other members of this family include Philodendron, Zamioculcas (ZZ Plants) and Spathiphyllum (Peace Lilies). If eaten, vomiting, nausea with a loss of appetite could occur and consumption of large quantities must be dealt with quickly.