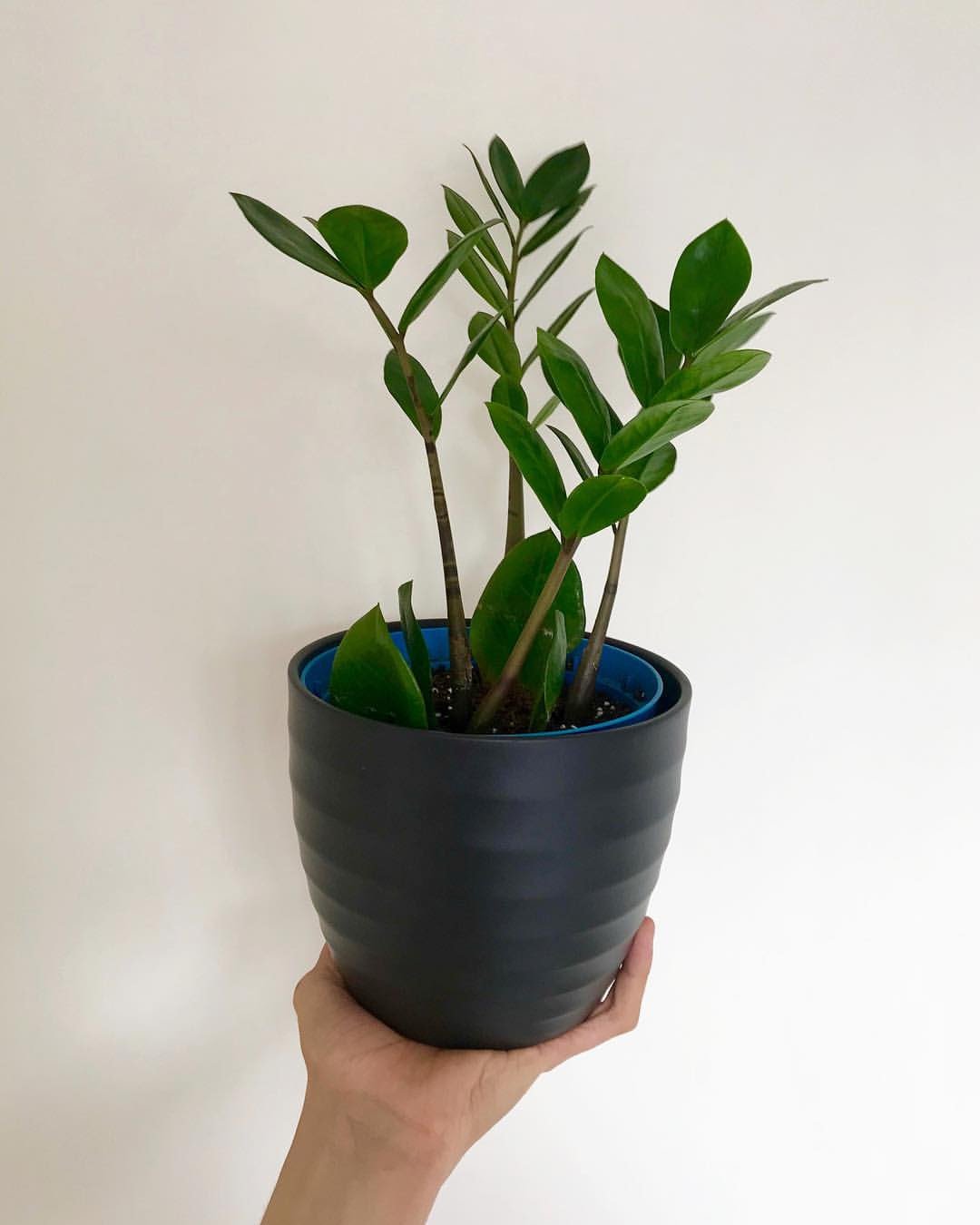 For queries or questions, comment in the section below.

Although differing light levels are all acceptable, a sunny window with morning or evening sun will work wonders. Along with Pothos, Peace Lilies and Sansevieria, these are an excellent choice for dark locations, but always regulate the amount of water it receives as too much will kill the plant outright. Be sure to allow the soil to fully dry out for at least two weeks to totally eliminate the chance of soil-borne diseases. Never place a ZZ Plant is more that three hours of intense sunlight a day as its ability to bounce back from scorched leaves may take several months.

The ukhouseplants saying, 'drenches between droughts' strongly applies to ZZ Plants. Not only will continuous soil moisture start to destroy the root system, it'll also cause the plant's tubers to begin to rot, killing it from the inside out. Allow all of the soil to fully dry out in between waters in summer for around a week or so, while reducing this further during winter. Under-watering symptoms include a weakened grey stem, yellowing leaves, little to no growth and dry, crispy patches forming on the leaf edges; these issues are usually caused by too much light/heat or forgetfulness. Remember, the brighter the location, the more watering you'll need to do. Over-watering symptoms include a weakened grey stem, leaves that have a rotten base, no new growth, yellowing leaves and plant death. The differences between under and over-watering are very similar; a rotten root ball will stop the plant soaking up vital moisture and nutrients, leaving you with wilted grey leaves. For more severe cases of root rot, click here!

Low humidity is fine with ZZ Plants, as long as its foliage is hosed down from time to time for the removal of dust particles and potential pests. Those situated in dark locations or bathrooms mustn't be over-misted, as it could cause powdery mildew or botrytis.

Fertilise monthly using either cactus feed, houseplant feed or a general purpose plant fertiliser (half strength). Never directly pour 'ready to pour' feed directly into the soil without a quick wash down with water as this will lead to burning roots. 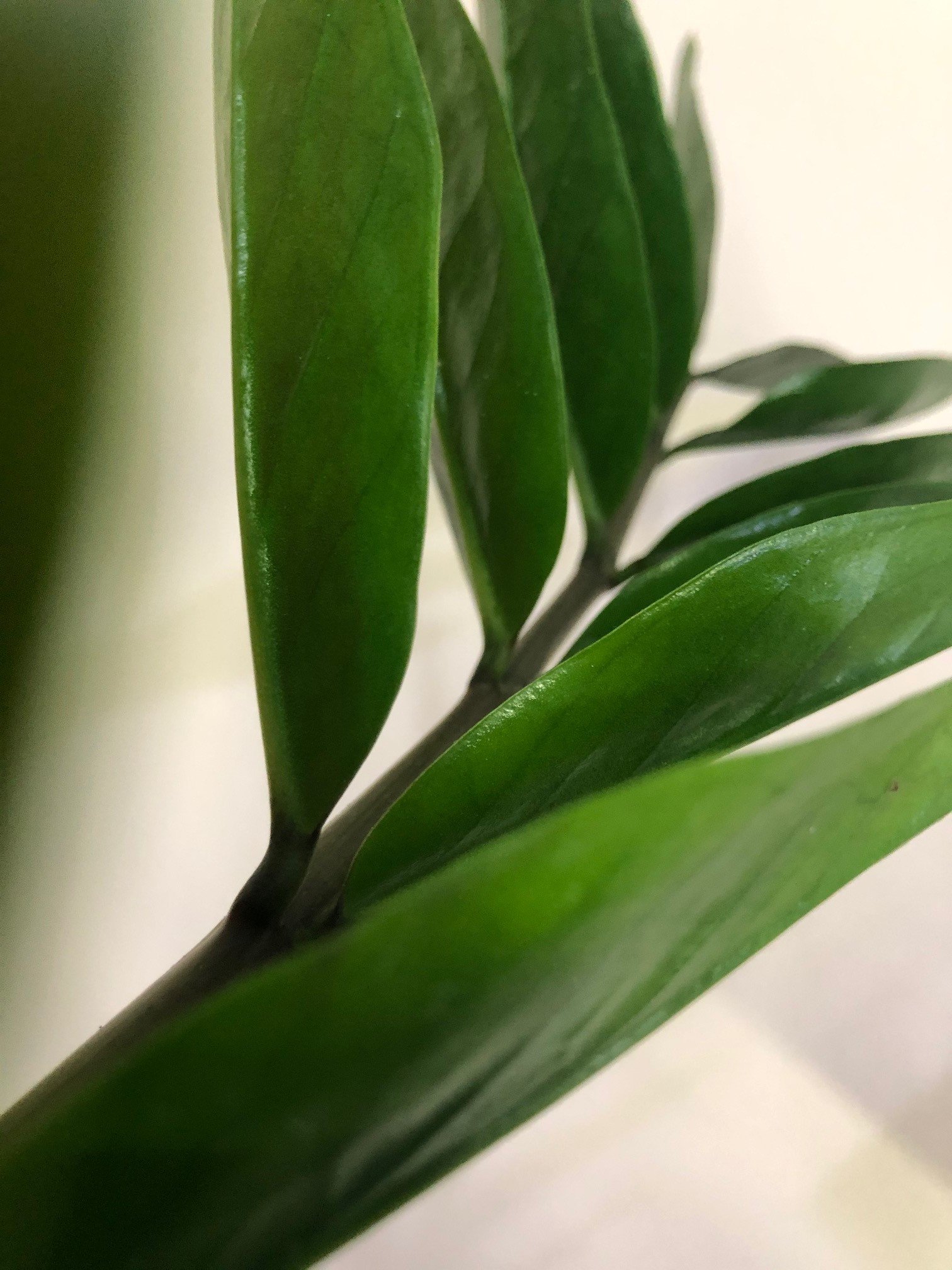 The beautiful leaf structure of the Zamioculcas zamiifolia.

The biggest issue with ZZ Plants is root or tuber rot, commonly caused by too much soil moisture and too little light. Typical symptoms include yellowing leaves, a collapsed base or wilting. Periods of dryness is mandatory for all succulents, especially with those situated in darker locations.

Directly pinpointing yellow leaves is quite hard, due to the many different issues that could be at fault. Problems include watering-related abuse, too much or too little light or over-fertilisation. Do not directly apply 'ready to pour' feed into the soil without a pre-water as this will lead to the burning of roots. Too much direct sunlight is another common culprit, with the foliage typically curling over time.

Do not allow temperatures to dip below 15ºC (59ºF) as irreversible damage will occur. If this happens, remove the severely affected areas and immediately improve growing conditions. As its rehabilitation will take several months due to the slow-growing nature, be sure to provide a stable location with adequate growing conditions to speed up this process.

Failed propagation via leaf cuttings is a common issue among amateur horticulturalists due to its complexity and lack of matured specimens. The first reason why the cuttings have failed is down to the maturity of the plant itself. Leaves must only be removed off the petiole once the plant has produced petioles that are over 80cm in length, as too little leaves less than 9cm in length won't store enough energy to produce tuberous growth.

Finding a brown crispy leaf that is wrapped around the base of the stem (pictured below - central top) is nothing to worry about, as it's just the reminiscence of the cataphyll that protected the bud whilst under development. Simply remove the leaf from the base to prevent the chance of disease. 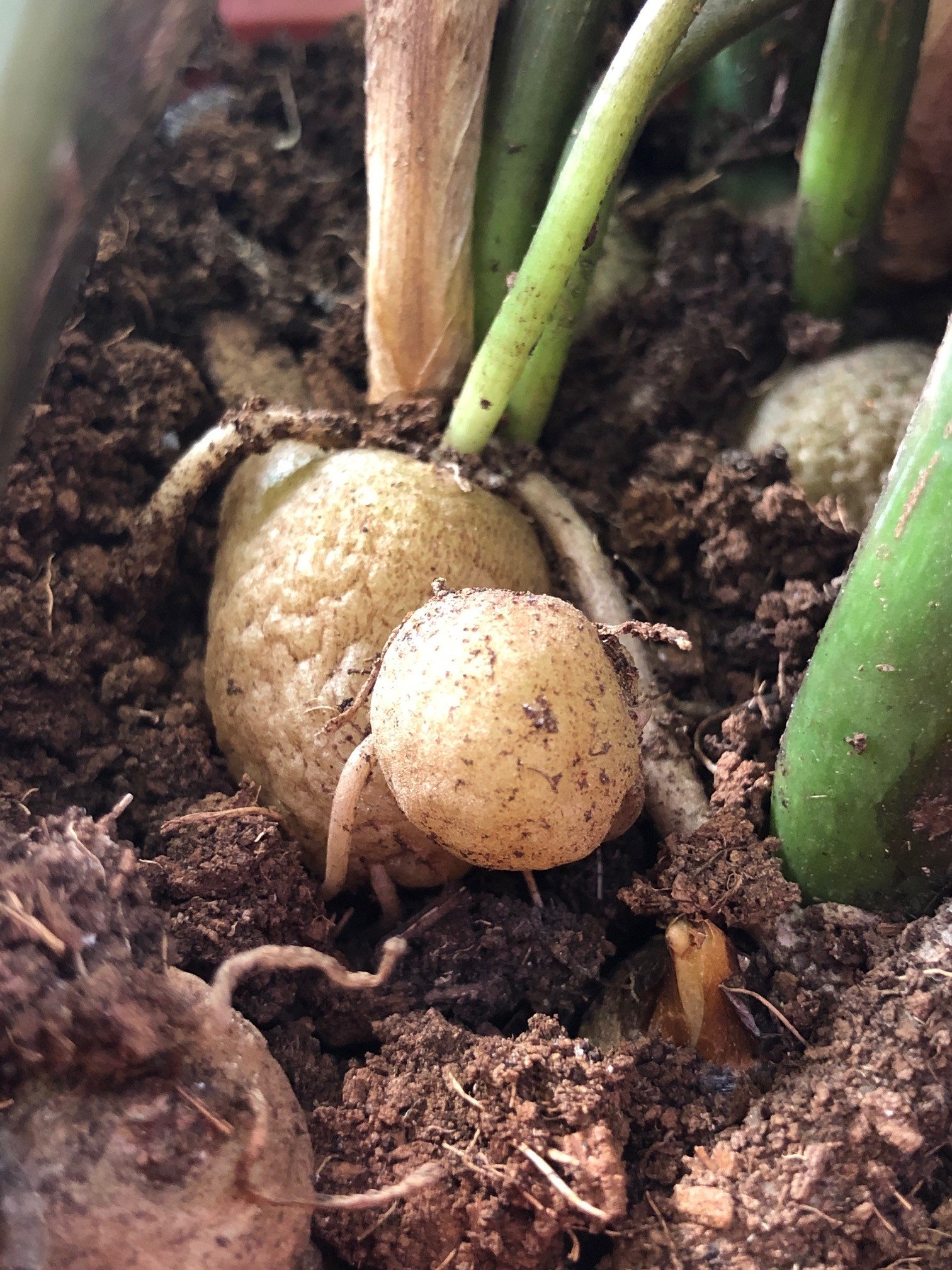 Zamioculcas have special adaptations to withstand the East African weather; both the modified stems (tubers (pictured)) and its tuberous petioles store water for reserves of up to two months.

Zamioculcas is a genus of one species, the Z. zamiifolia, originating from Kenya in eastern Africa. Although the genus was first described in 1829 by Loddiges as Caladium zamiifolium but was quickly moved into the current genus by Schott; its final botanical name, Z. zamiifolia was penned by Adolf Engler in the late 19th century. The name is a nod to both the Cycas genus of Zamia, and that of Colocasias which itself has derivations from the Arabic word, culcos. 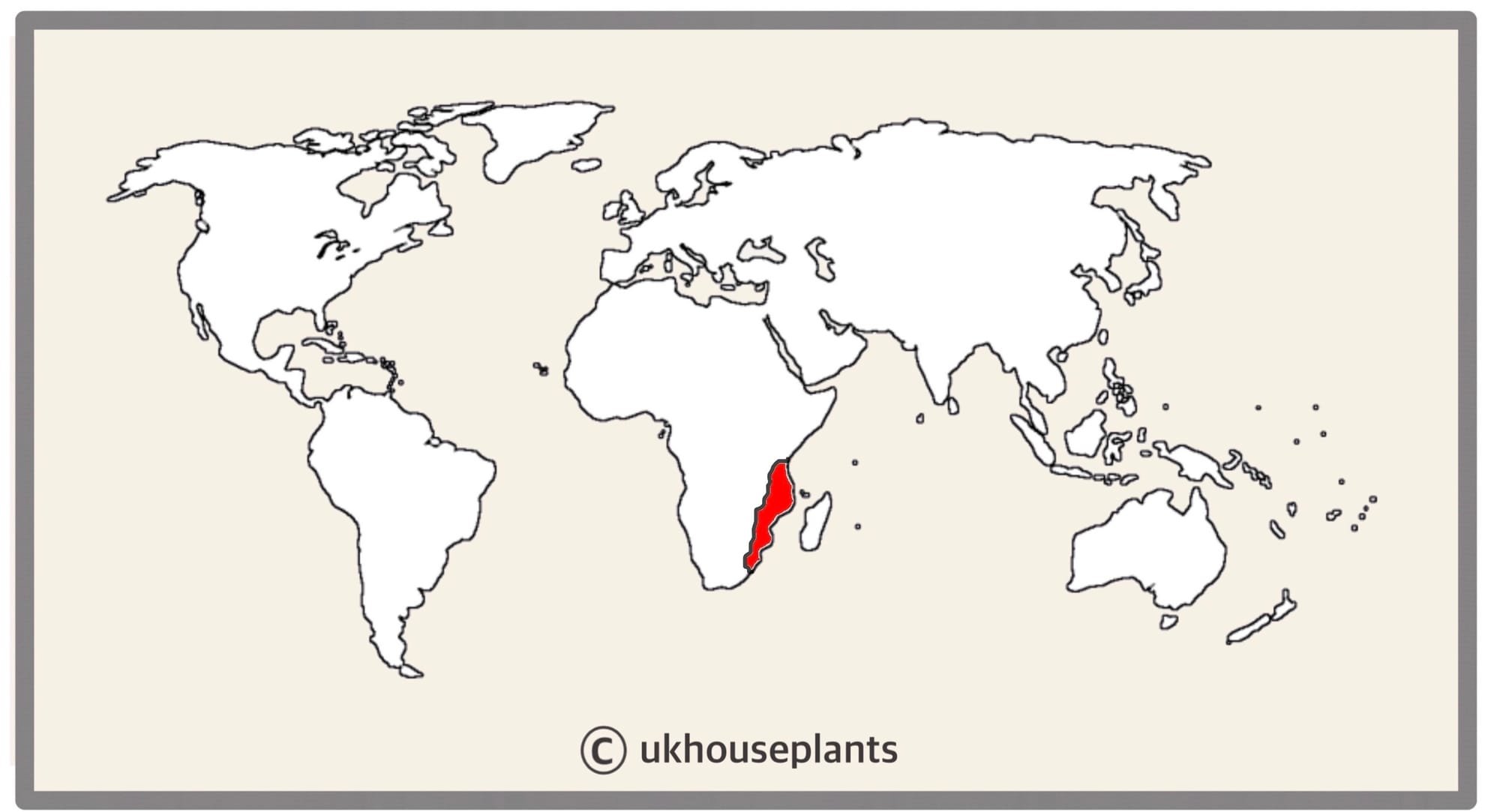 A Distribution Map of Zamioculcas zamiifolia

The overall size can be up to 0.8m in height and 1.5 m in width, with matured petioles reaching over 1m in length. The ultimate height will take between 6 - 10 years to achieve when repotted biannually, with two or three new growths per annum.

The cataphyll may need to be removed once fully browned over; this is located at the stem's base and can be seen on the image above.

Division (Moderate) - For this method, it's best to divide in spring or summer and once the tuberous offsets are at least half of the size of the mother plant's. If you have several established specimens within the pot, you'll have the option to individually separate them to double your stock. Always pre-water the soil at least 24hrs before propagation to avoid damaging the dry root hairs, which will lead to transplant shock and inevitable death. Remove it from the pot and place your hand in between the two tubers - soil may have to be removed to get a better grip. While placing your hand firmly around the junction, gently push the offset downwards, supporting the mother plant - you should hear a snap. Cautiously separate the two roots systems, keeping great empathise in keeping the specimens intact and damage-free. Place the new plantlet in a well-draining potting mix, much similar to the original soil, and maintain the same care routines. Cactus & Succulent Compost is best, or you can make your own using multipurpose compost with a generous amount of grit, sand and perlite. Make sure not to use a pot that is too big as a ratio of roots-soil that leans towards the latter will cause root rot and eventually plant death. 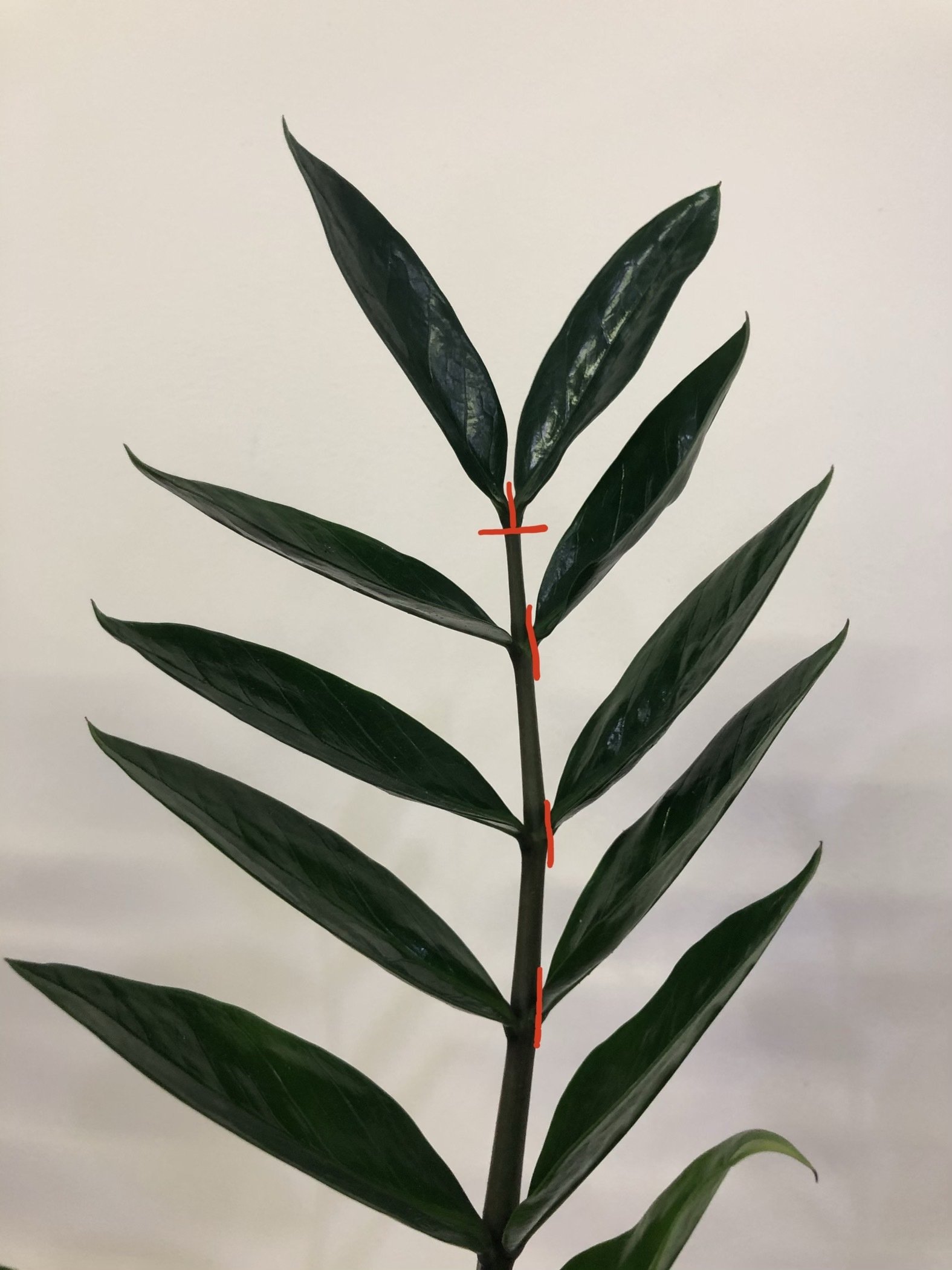 If there are visible signs of rot towards the bottom half of the stem - take leaf cuttings as the disease may travel to the top. The red lines indicate where to cut for leaf propagation.

Leaf Cuttings (Difficult) - Leaves that are halfway along the petiole have the most potential due to its size and maturity. Gently place your fingers between the petiole and the leaf's base, pulling it downwards until you hear a snap. Ensure the wound is wholly intact with no damage as a tear will result in unsuccessful propagation. Set the bottom half into moist Cactus & Succulent Compost and place the pot in a transparent bag to provide high humidity. Open it up for an hour every few days to allow fresh air to circulate the leaf. Offer a bright, indirect setting with temperatures around 18°C (64°F) with the majority of the soil drying out in between waters. The calloused base will develop into a tuber, thus signalling the propagation success. After a few months, inspect its root system and transplant into a bigger pot if necessary. This process will take many weeks, so if you need any more help with leaf cuttings, don't hesitate and send us a message via this link!

As they form part of the Araceæ family, their flowers aren't showy. Much like a Peace Lily's flower body, their flowers consist of a white or green spathe (the spoon-like shell) with the spadix being the section that can be pollinated. Blooms can last up to five days and is usually visible during late spring or early summer around 20cm from the soil line. Unfortunately, producing blooms is a rare occurrence due to the unfavored growing conditions found in a typical domestic setting.

Repot every three to four years in spring using a Cactus & Succulent labelled potting mix and the next sized pot with adequate drainage. ZZ Plants are far better being potbound for several years due to the heightened risk of root rot and repotting-issues (like transplant shock) - so only repot if you feel it's wholly necessary. Deformed plastic pots caused by the underground growths are standard and won't necessarily require a bigger pot.

Hydrate the plant 24hrs before the tinkering with the roots to prevent the risk of transplant shock. For those situated in a darker location, introduce an extra amount of perlite and grit into the deeper portion of the pot to downplay over-watering risks. Click here for a detailed step-by-step guide on transplantation, or via this link to learn about repotting with root rot.

Members of the Araceæ family typically contain poisonous calcium oxalate crystals, with Zamioculcas being no exception. Other members of this family include Philodendron, Alocasia and Spathiphyllum (Peace Lilies). If eaten, vomiting, nausea with a loss of appetite could occur and consumption of large quantities must be dealt with quickly.