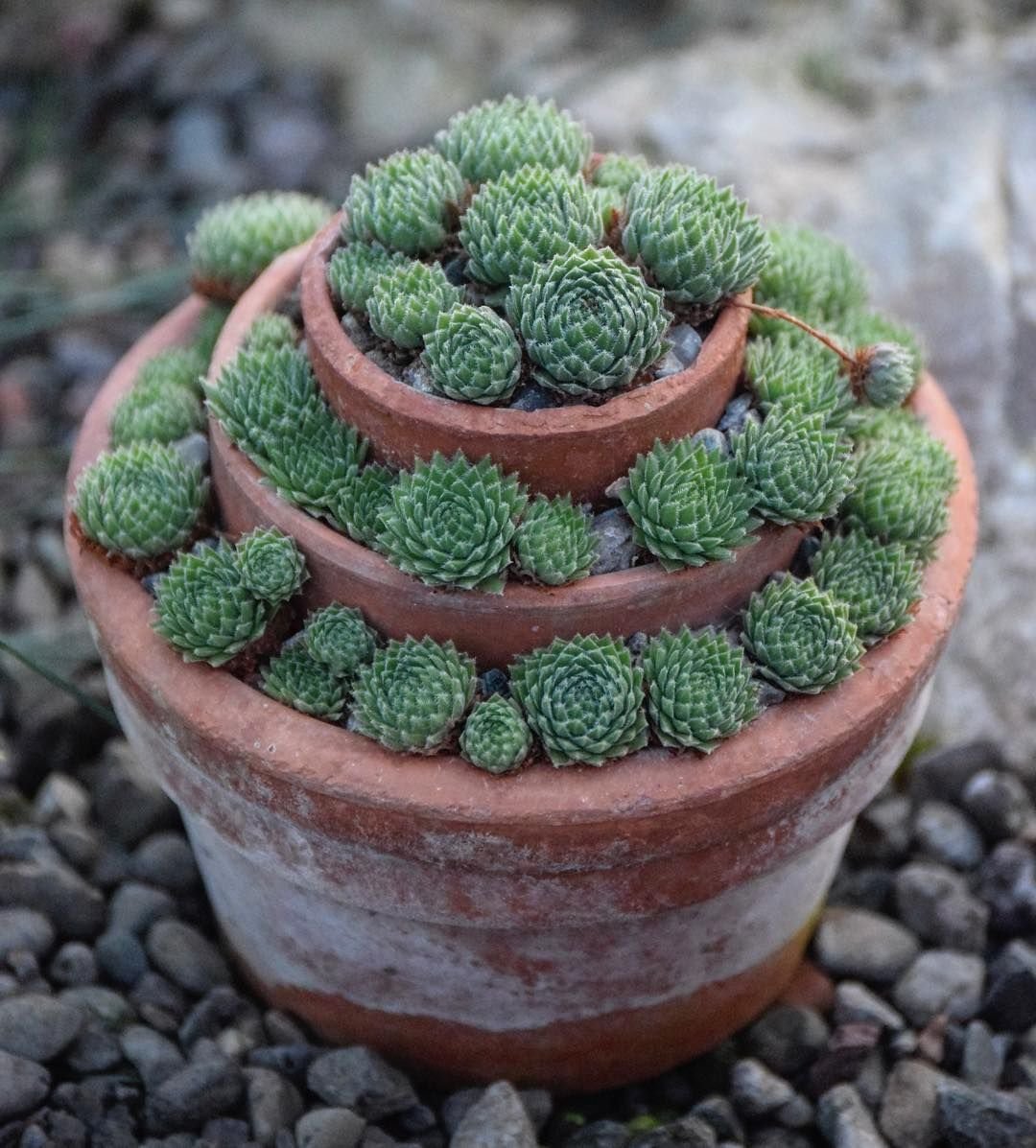 Place your specimen in the brightest location as possible. A few hours of sunlight will be highly beneficial for the plant, as it'll significantly reduce the risk of over-watering and root rot. Due to the genus' intolerance to low light, avoid placing one in areas where a newspaper can't be read without the use of artificial light - for example, more than a metre from a window or light source. Suitable locations are a conservatory, south-facing window, summerhouse or a sun-filled porch.

Allow all of the soil to dry out in between waters, reducing this to every four to six weeks in the colder months. Winterising your Sempervivums is essential to maintain good health; keep the plant 'ticking over' by reducing the number of irrigations to every three weeks and avoid over-fertilisation. One word of advice is never to allow excess moisture to settle either in the actual crown of the plant or underneath the pot, as both will cause southern blight or even black rot. Under-watering symptoms include drooping leaves, stunted growth, and drying leaves; these can be a range of different issues, including forgetfulness, too much sunlight, or the plant being pot-bound. Over-watering symptoms include root rot, a rotting base, or sudden plant death. Sempervivums must have sufficient light levels (at least two hours of direct sunlight a day) to counteract the chance of root rot. For more severe cases, click on this link below to learn about how to address root rot.

This is not a factor; however, if the Sempervivum is situated indoors, a quick hose down from time to time will reduce the number of dust particles covering its leaves. 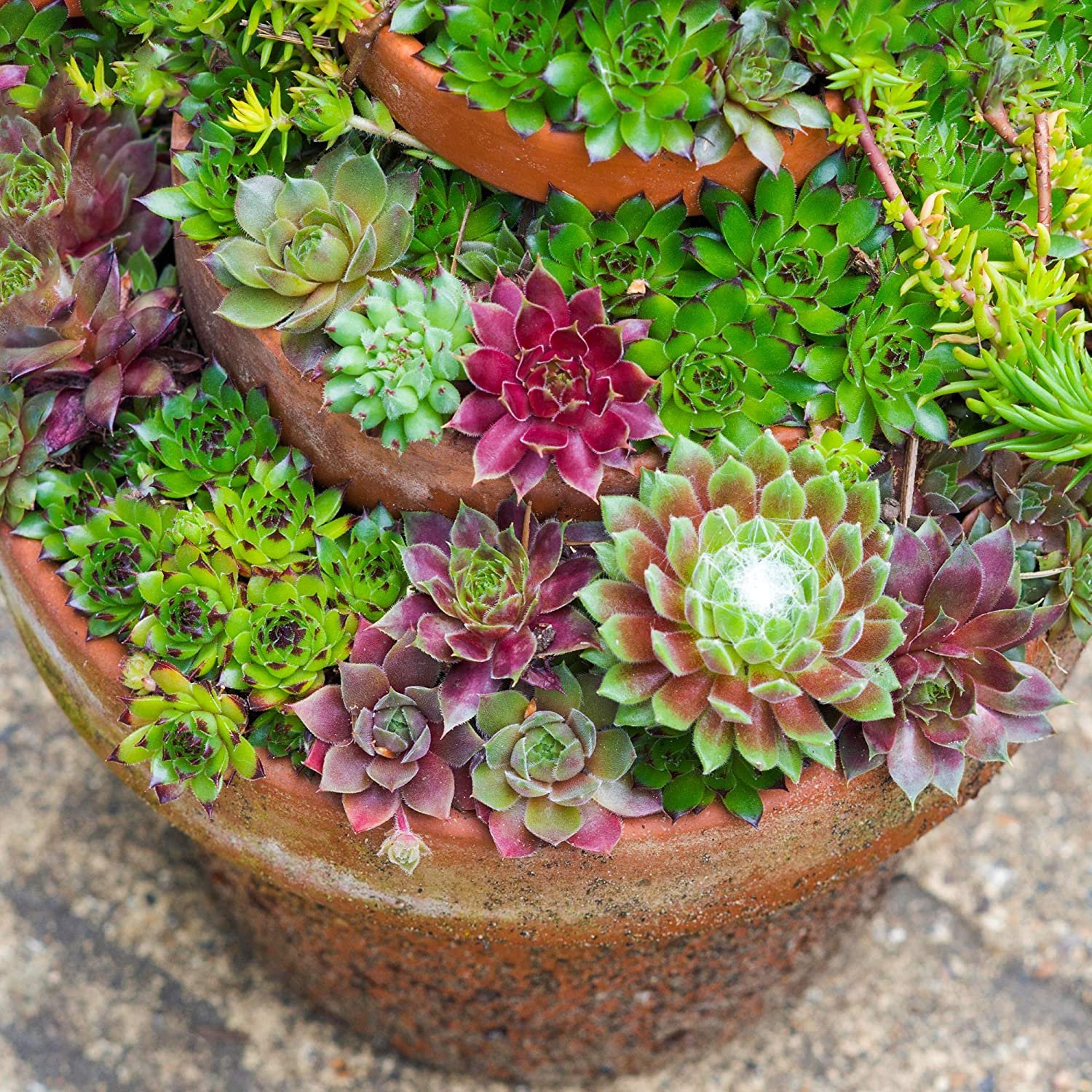 Because of their easy-natured propagation hacks, creating displays like this is quick, affordable and extremely fun! Copyright: Gardening Express.

This is the most significant step; reduce the temperature down by around 5℃ compared to the summertime or place in a room that's between 8º - 15℃  (46º - 59℉).  You'll be at a significant disadvantage if the ambient temperature is kept constant throughout the year, as Sempervivums will only respond in locations that have daily fluctuations of around 7℃. Never exceed the minimum temperature as it may lead to plant death or yellowed foliage at a bare minimum. If these steps are followed successfully, you could see a show of blooms in the following summer - but remember, dealing with nature may not always provide the results you'd relish! 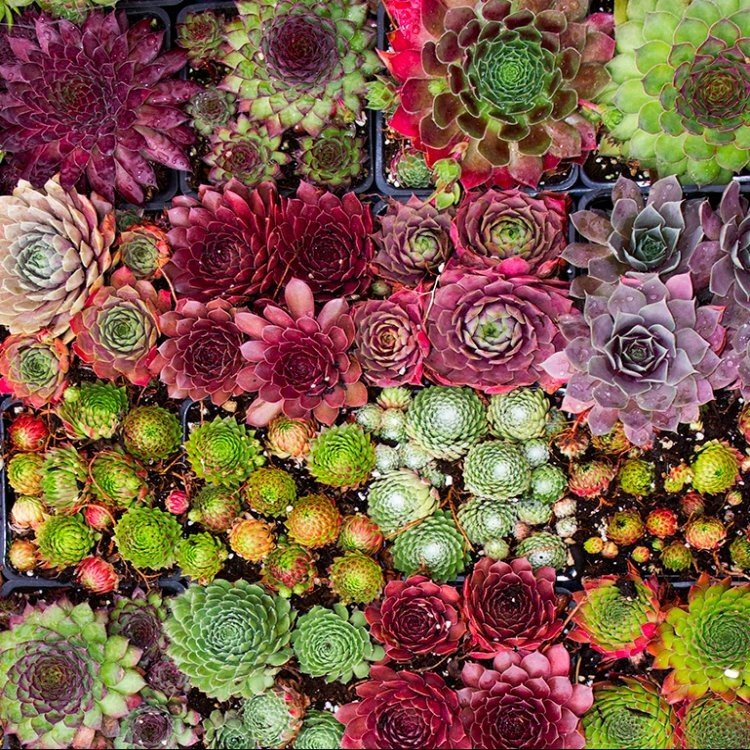 Sempervivums, like most other alpines, are very cheap to purchase from garden centres. The cost varies depending on its size, but some can be bought for as little as £2.49!

Over-watering is the most common issue, with typical signs including a rotten crown, yellowed or shrivelled foliage and a soft base. There must be periods of droughts to replicate the habitats of the Mediterranean, as well as limiting the chance of diseases. Avoid waterlogging as there's no point fulfilling the phrase 'drenches between droughts' if the base of the pot is submerged. For more information about over-watering related issues, be sure to click on this link.

Scorched or browned edges on the older leaves are the result of too little water and over-exposure to the sun. Although Sempervivums are a superb choice for plants in sunny locations, those that haven't acclimatised to the harsh rays will show signs of sun-scorch and environmental shock. Prolonged exposure will significantly speed the process of dehydration, so consider transplantation into a bigger pot (in the spring) to wrap the roots around moister soil.

Over-supplementing a Sempervivum will bring nothing but grief in the likes of yellowing leaves and weak, dramatic growth. Although a six-weekly feed is an excellent way to promote good health, dry soil and fertiliser salts will quickly lead to the burning of roots. The advice for this issue is to pre-moisten the compost beforehand and reduce the frequency of fertilisations somewhat.

Sempervivum consists of around ninety species, fourteen of which are non-artificial 'nothospecies' that have naturally hybridised between two species. Carl Linnaeus first described the genus back in 1753, using the Latin words, semper & vivus, that translates to 'forever living'. This refers to the lack of leaf-loss over the autumn and winter, as well as surviving in adverse locations. 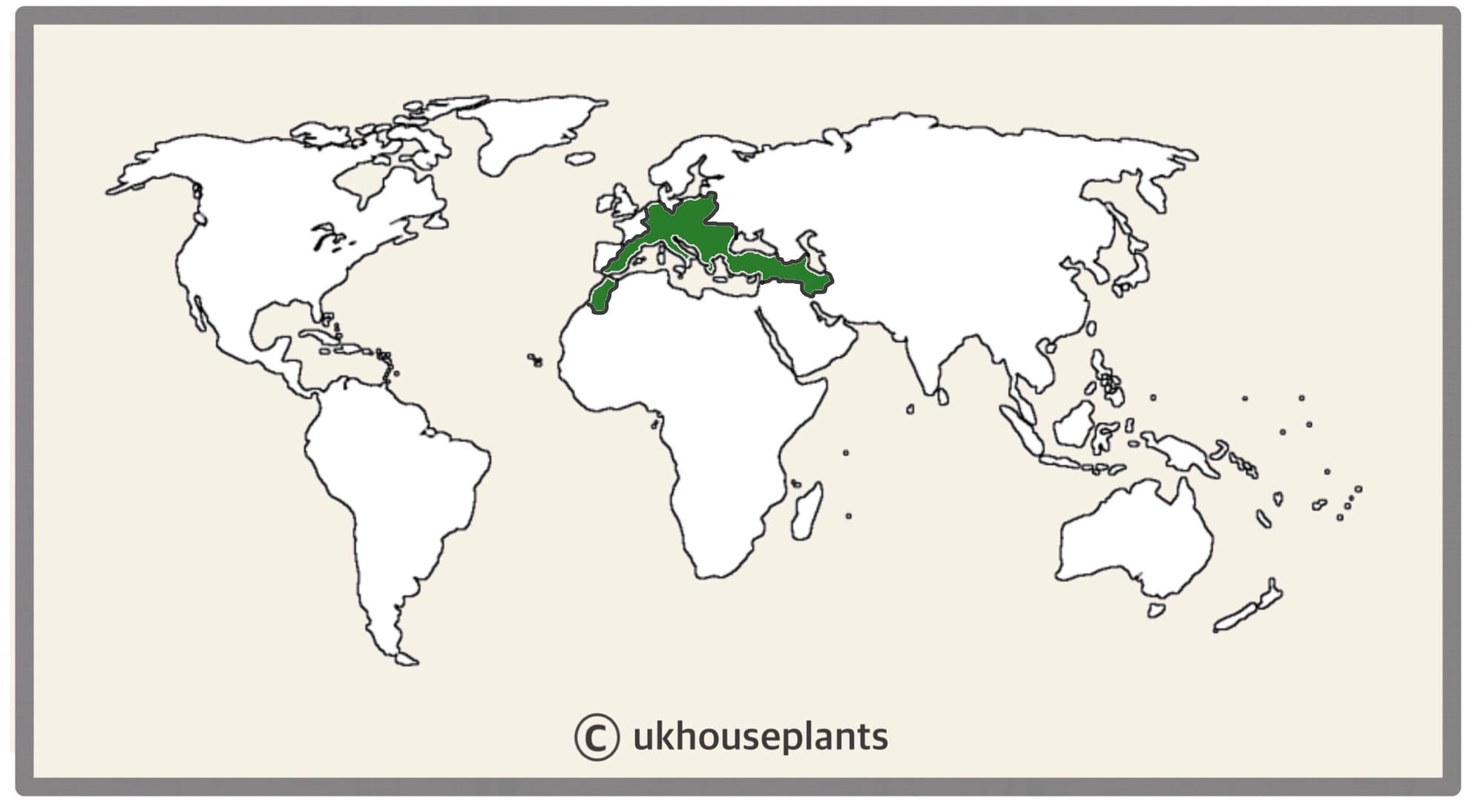 The Distribution of Sempervivum.

-4° - 35°C (25° - 95°F)
H3 (Hardiness Zone 9) - Tolerate to temperatures below freezing. Although it can survive frosts and thin snow, refrain from bringing it indoors overnight if the room temperature is above 5℃ (40℉), as a sudden change in temperature may cause environmental shock with weakened spring growth and a lack of flowers over the season's course. Instead, either leave it outdoors or in an unheated conservatory, brightly lit garage or a greenhouse until the risk of frost has elapsed.

Up to 0.7m in height and 1m in width. The ultimate height varies greatly from one species to another but generally will take between 5 - 8 years to achieve.

Via seed or Offset Division.

Offset (Pup) Division - For this method, it's best to divide in spring or summer and once the offshoots are at least a quarter of the mother plant's size. Remove its pot and place your hand in between the junction that connects the two; soil may have to be brushed away to get a better grip. Gently push the pup downwards while supporting the mother plant until you hear a snap. Cautiously separate the root systems, keeping great care in keeping them damage-free. Place the new plantlet in a small pot with a well-draining potting mix, much similar to the original soil, and maintain the same care routines. 'Cactus & Succulent' compost is best, or you can make your own using multipurpose compost with added grit or perlite. Provide a bright setting with temperatures around 18°C (64°F) with the majority of the soil drying out in between waters. New leaves should emerge within the eight weeks, as long as the soil is kept on the drier to life.

Pink or purple flowers are held by a spike that'll develop each year, reaching up to 50cm in height during the summer. Each flower can last up to several days, with the blooming process lasting several weeks. Ensure to keep the plant slightly more hydrated with a fortnightly feed of Cactus Feed during this time to prolong this period. 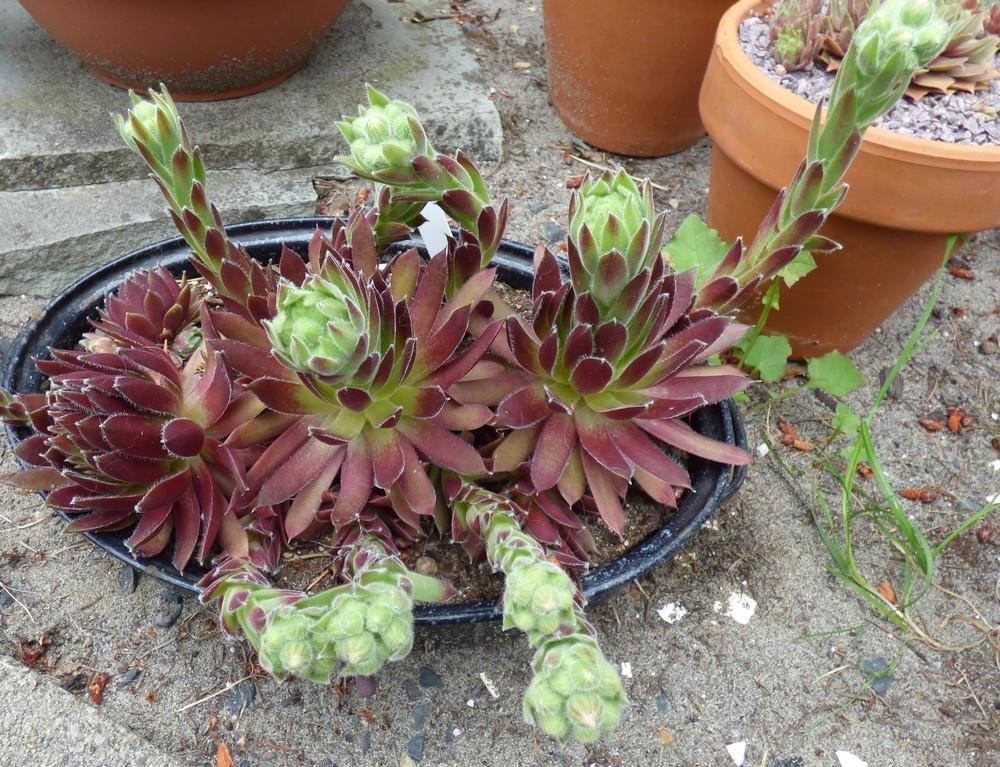 The developing bracts of a Sempervivum 'Strawberry Kiwi'. Copyright: The National Gardening Association.

Repot three years in the spring, using a 'Cactus & Succulent' labelled potting mix and the next sized pot with adequate drainage. Hydrate the plant 24hrs before tinkering with the roots to prevent the risk of transplant shock. For those situated in a darker location, introduce an extra amount of perlite and grit into the deeper portion of the pot to downplay over-watering risks. Click on this link for a detailed step-by-step guide on transplantation, or via this link to learn about repotting with root rot.

Keep an eye out for mealybugs, aphids, scale, whitefly, vine weevils & root mealybugs that'll locate themselves in the cubbyholes and undersides of the leaves, with the exception of the latter two in the soil. Common diseases associated with indoor Sempervivums are root rot, leaf-spot disease, botrytis, rust, powdery mildew & southern blight - click here to learn more about these issues.