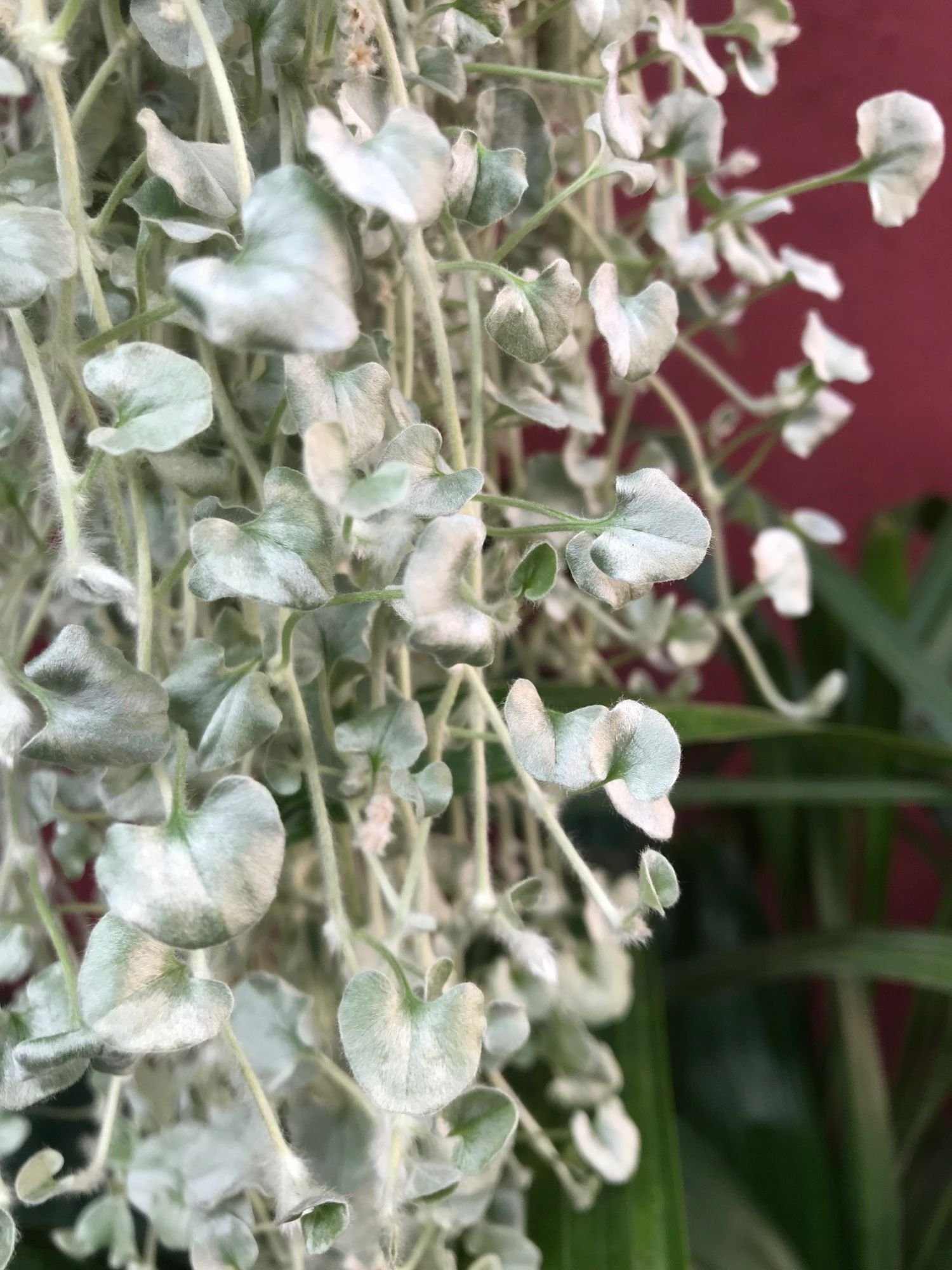 Provide a bright location that offers a few hours of either morning or evening sun. A shady will significantly increase the chance of root-rot, as well as much slower growth. The ideal location around the house would be within a few metres of a window or in a semi-shaded conservatory.

Dichondra are well-equipped to endure short-lived droughts - which is why they're used in sunny hanging baskets. Once the pot begins to feel light again, rehydrate the soil using the bottom-up method of submersion. Place the plant on a saucer and fill the bottom 25% with lukewarm water; it should only take a few minutes for full absorption. Never allow excess moisture to sit on the foliage as it could cause rotting foliage or even powdery mildew. Under-watering symptoms include the curling or crisping of leaves, yellowed foliage, stunted growth and a 'washed out' appearance. These issues are usually caused by too little soil moisture and too much light/heat. Although they prefer to be kept on the drier side to life, poor soil conditions will increase the chance of dehydration and disease susceptibility. Over-watering will create leaf-loss at the base (leaves closest to the soil), root rot, and possible stem collapse. These are usually down to too much soil moisture -  be sure to allow at least half of the soil dry out in between waterings and consider a brighter location, too.

High humidity isn't required for Dichondra; however, misting the leaves during hot spells will help keep them hydrated as long as it's not in direct sunlight. Over-misting the foliage could cause several fungal issues down the line, like powdery mildew or leaf spot disease, especially if it's grown in a shady location.

Never situate it within four metres of an operating heat source, for instance a radiator or fireplace. Due to the heightened temperature, the plant will soak up far more moisture than those situated in cooler locations, increasing the chance of droughts and browning leaf-edges.

The genus of Dichondra was first described back in the 1780s by Georg & Johann Forster. For those who don't know who these explorers are, they accompanied Captain Cook during his Second Voyage to the Pacific and took notes of the yet-to-be-discovered Kentia Palms and Norfolk Island Pines. Its name derives from Ancient Greek meaning 'two' and 'grains', which is in reference to the fruits produced in the autumn. The species, D. argentea, originates from several locations of North and South America, first being described botanically by Carl Ludwig Willdenow in the 1800s. The specific epithet can be translated from Latin, referring to its silver-like appearance. 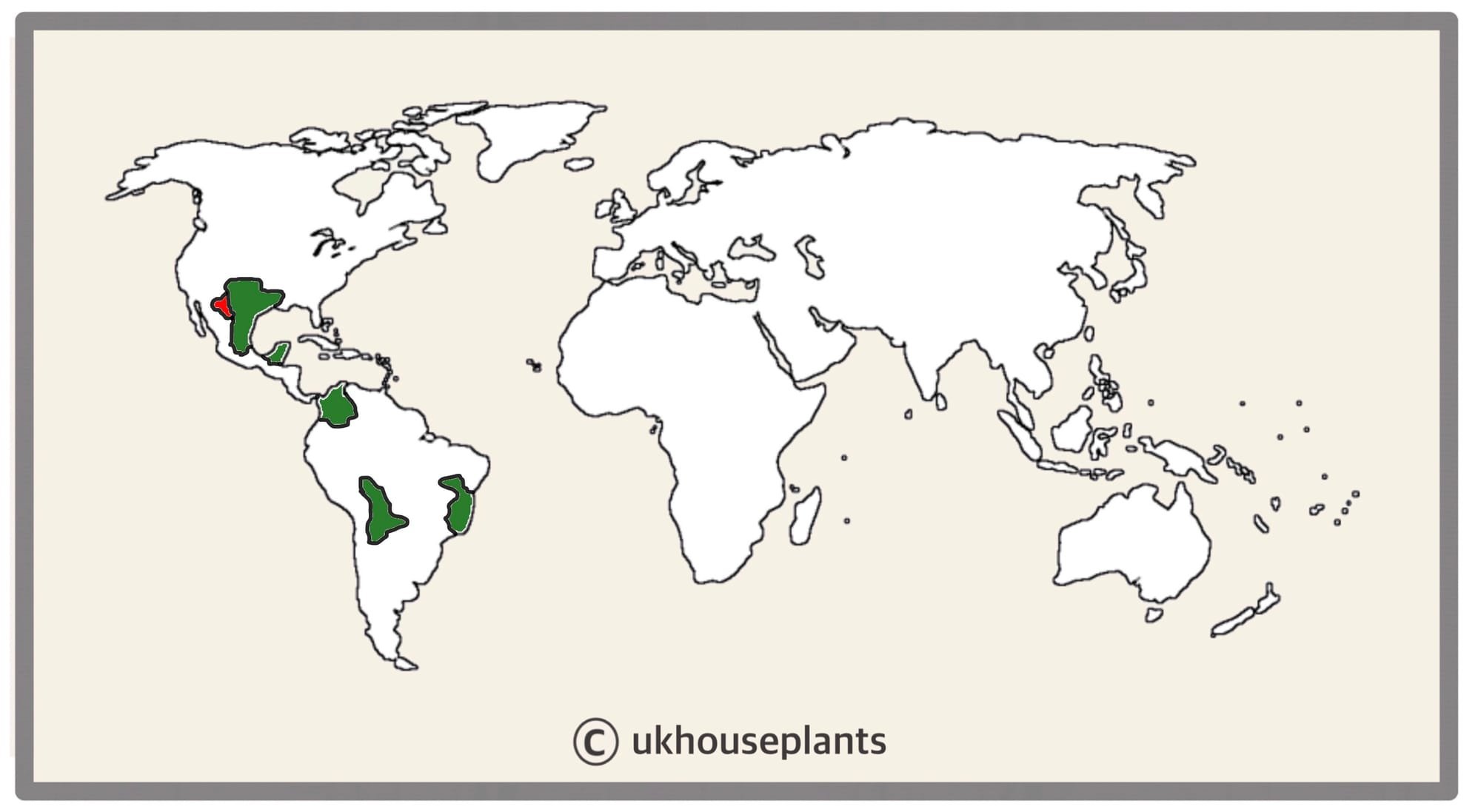 The Distribution of Dichondra argentea in Green & locations where it has become extinct in Red (The State of Arizona).

5° - 30°C   (41° - 86°F)
H2 (Hardiness Zone 10) - Tolerant of temperatures above freezing. This plant will die if left in temperatures below frosts; move to a conservatory or greenhouse until this risk has elapsed.

Up to 15cm in height and 2m in width, with the ultimate height being reached in 2 - 4 years.

Dichondra will produce small clusters of white flowers along the leading growths in the summer months. Unfortunately, due to the unfavored growing conditions indoors, they'll rarely flower when domestically cultivated and therefore are predominantly grown for their foliage.

Repot every two years in the spring, using a 'Houseplant' labelled potting mix and the next sized pot with adequate drainage. Dichondra are far better potbound for several years due to the heightened risk of root rot and repotting-issues (like transplant shock), so only repot if you feel it's wholly necessary - restricted root growth will also increase the chance of blooms, too.

Keep an eye out for mealybugs, aphids, scale, fungus gnats, whitefly, blackfly, vine weevils & root mealybugs that'll locate themselves in the cubbyholes and undersides of the leaves, with the exception of the latter two in the soil. Common diseases associated with Dichondra are root rot, leaf-spot disease, botrytis, rust, powdery mildew & southern blight - click here to learn more about these issues.

This plant is classified as poisonous. If sections are eaten, vomiting, nausea and a loss of appetite could occur. Consumption of large quantities must be dealt with quickly; acquire medical assistance for further information.

Some garden centres will sell this outside in the hanging basket selection during the spring - mainstream stores are Dobbies & Blue Diamond.