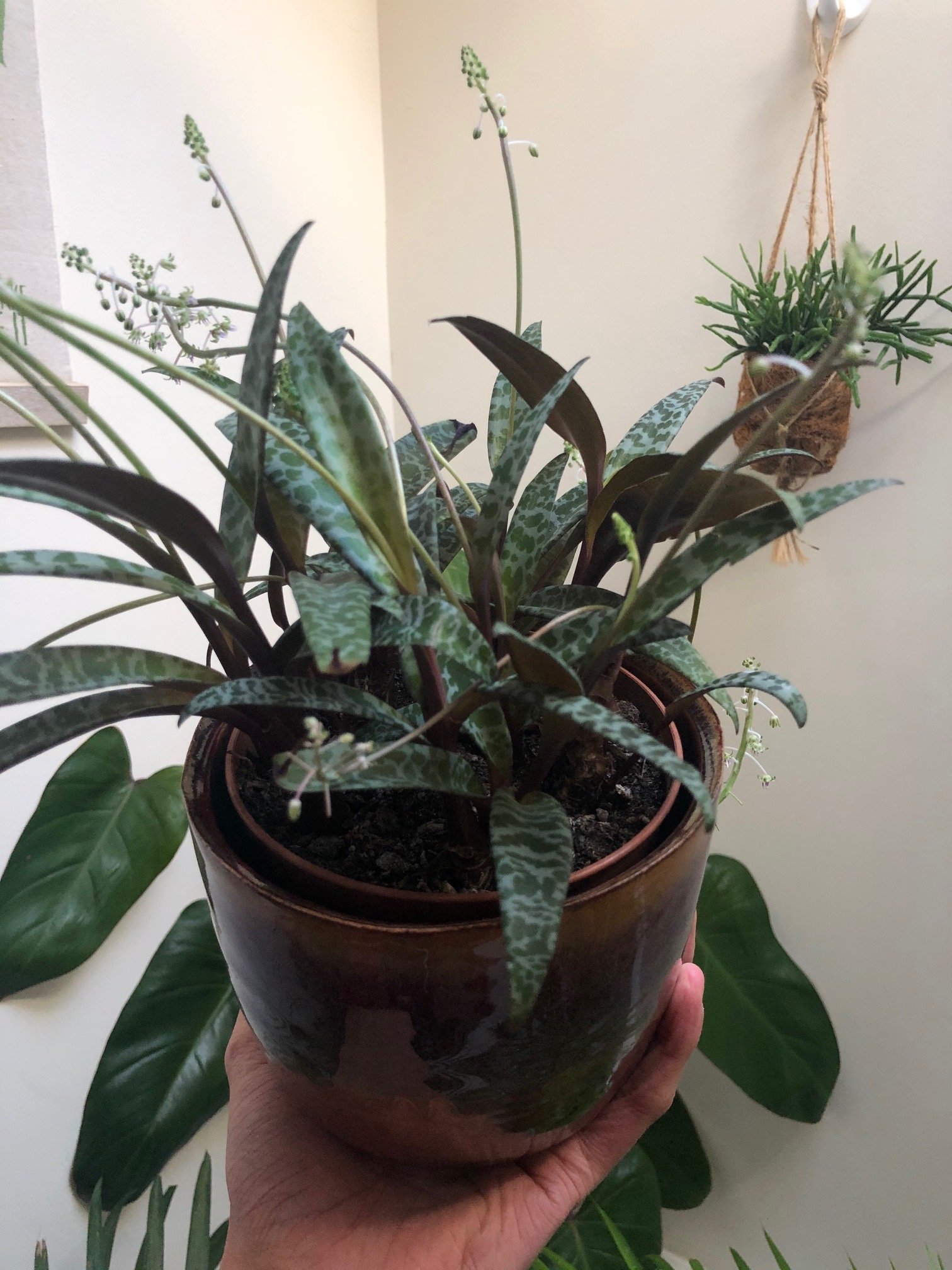 Perfecting the amount of light a Silver Squill receives is crucial for a long-lasting specimen. During the spring and summer, be sure to provide a brightly lit spot away from any direct light. Excessive exposure during this time will negatively affect the plant in the likes of sun-scorch and dehydration. Once the autumn kicks in, be sure to include an hour or two of direct light per day to get it through the dormancy period, lasting until the following spring. Due to the species' intolerance to low light, avoid placing one in areas where a newspaper can’t be read without the use of artificial light.

The ukhouseplants saying of 'drenches between droughts' should be applied to this plant. Not only will continuous soil moisture ruin their root systems, but it'll also increase the risk of 'heart rot' which essentially will destroy the plant from its bulbous centre. Allow almost all of the soil to thoroughly dry out in between waters in the growing period, reducing this further in the autumn and winter. If you're struggling when to hydrate it, feel the pot's weight and if it needs a water, it'll be rather light (instead of being heavy). Under-watering symptoms include a shrivelled stem, yellowing leaves, little to no growth and dry, crispy patches forming on the leaf edges. These issues are usually caused by too much light/heat or forgetfulness. Remember, the brighter the location, the more watering you'll need to do. Over-watering symptoms include a weakened or rotten stem, no new growth, yellowing lower leaves and eventual plant death. The differences between under and over-watering can be very similar, with a rotten root ball or bulb being the obvious difference. 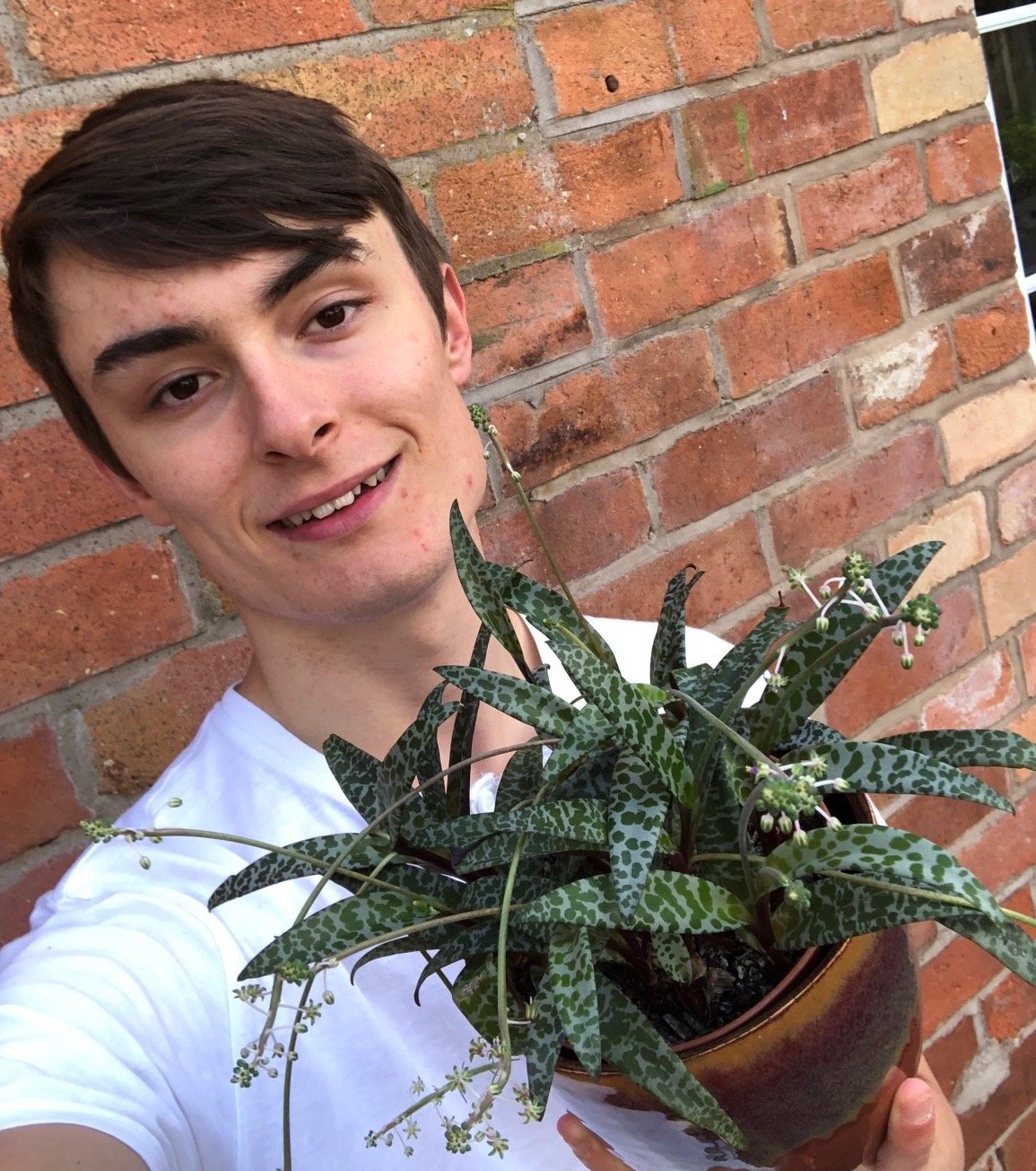 The intriguing patterns of the foliage is something many collectors admire. Here, you see the writer of ukhouseplants' posing with his flowering specimen earlier in 2020.

A loss of variegations and leggy growth is caused by too little light. Although Silver Squills are an excellent choice for shady locations, it'll come at the cost of its variegations. Move the plant into a brighter area with minimal direct sunlight to allow the variegations to appear on the new growth. If you aren't entirely displeased about the loss, simply skip this step. Alternatively, extreme variegations that hinder the plant from developing chlorophyll (green pigmentation) is typically caused by too much sunlight.

Root rot is another common issue with specimens sat in too moist or waterlogged soil for long periods. Symptoms include rapidly yellowing leaves, stunted growth and a rotten brown caudex. Take the plant out of the pot and inspect its health below the soil line. If the roots sport a yellow tinge, you're good to go, but if they're brown and mushy, action must be taken immediately. More information about addressing root rot can be found on this link.

Directly pinpointing yellow leaves is rather challenging due to the many different issues that could be at fault. Problems include watering-related abuse, too much or too little light, and fertilisation issues. Always keep in mind that a gradual loss of older leaves (accompanied by reliable juvenile growth) is an inevitable part of ageing.

Never allow temperatures to dip below 3ºC  (37ºF)  as irreversible damage may occur in the likes of yellowed foliage and weakened growth. If this happens, remove the severely affected areas and immediately improve growing conditions - never cut through softened yellow growth, and only around brown, crispy squares. As rehabilitation can take several months because of its slow-growing nature, be sure to provide a stable location with better growing conditions to speed this process.

A lack of flowers is caused by an insufficient dormancy period, where the temperatures are kept more or less the same over the year. Reduce the warmth by a couple of degrees over the autumn and winter, along with fewer irrigations to ensure a well-spent dormancy. As the environment remains on the cooler side, this may stimulate flower spikes on the maturer bulbs' terminals; scroll down to 'Flowers' for more information on this!

The Silver Squill was first described by John Baker as Scilla socialis in 1870, using the Latin words for 'Sea Onion' in reference to the bulbous appearance. The species was later transferred into Ledebouria in 1970 by John Jessop, honouring the German-Estonian botanist of Carl Friedrich von Ledebour. The species epithet, socialis, can be translated from Latin to mean 'dominance', which refers to the large growing habits in the wild. L. socialis has a natural distribution across the Eastern Cape of South Africa. 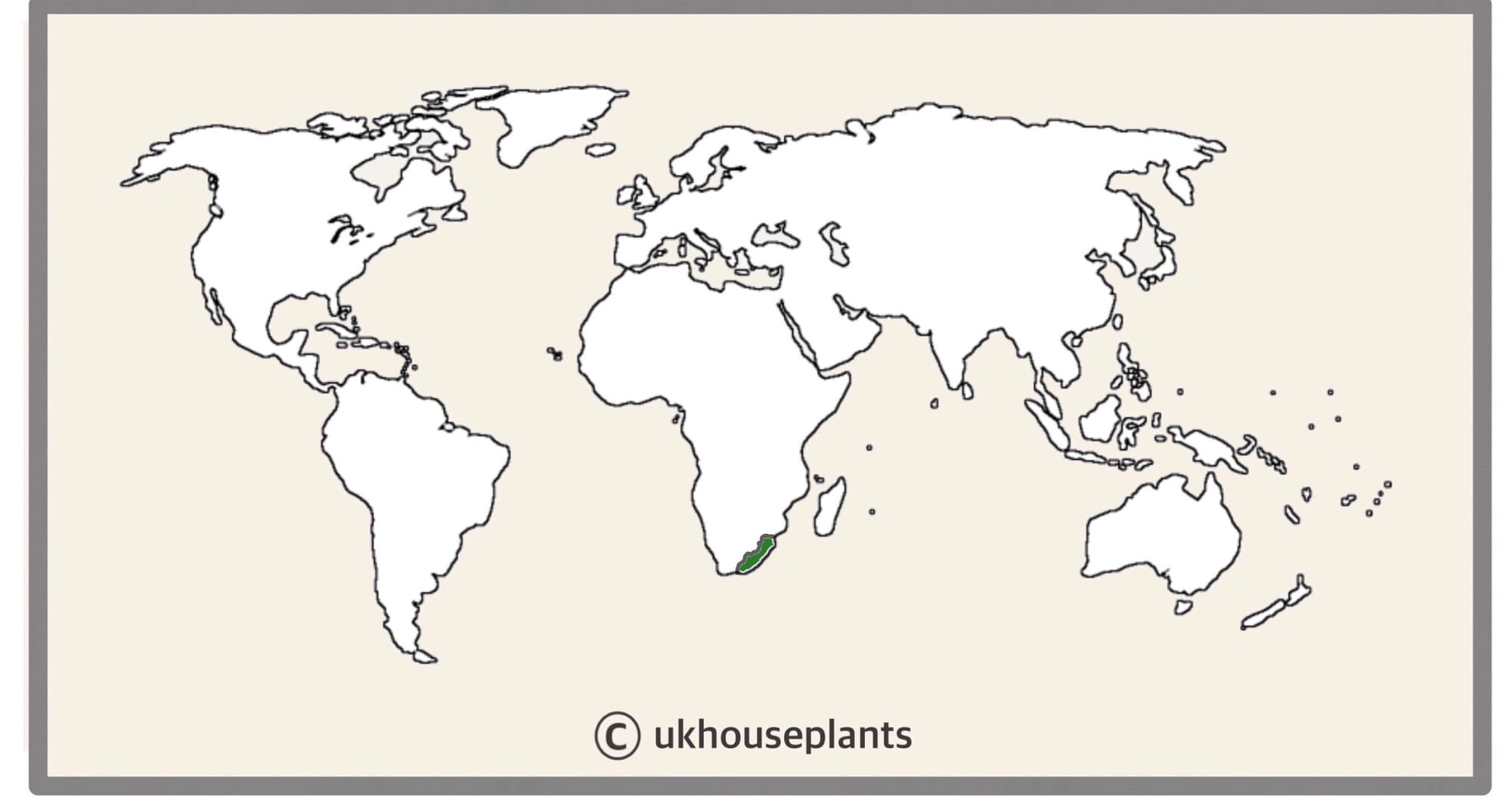 The Distribution of Ledebouria socialis.

0° - 32℃   (32° - 90℉)
H2  (Hardiness Zone 10)  - Tolerant of temperatures above freezing; this plant will die if left in temperatures below frosts. Move to a conservatory or greenhouse until this risk has elapsed. If you decide to bring this plant outdoors, don't allow it to endure more than an hour of direct sunlight a day as it may result in sun-scorch. Regularly keep an eye out for pests, especially when re-introducing it back indoors.

The overall size can be up to 0.3m in height and 0.4 m in width. Ultimate height will take between 3 - 5 years to achieve when repotted every few years, with several new leaves unfurling per annum. After the ultimate height is reached, each bulb will start to produce basal offsets. 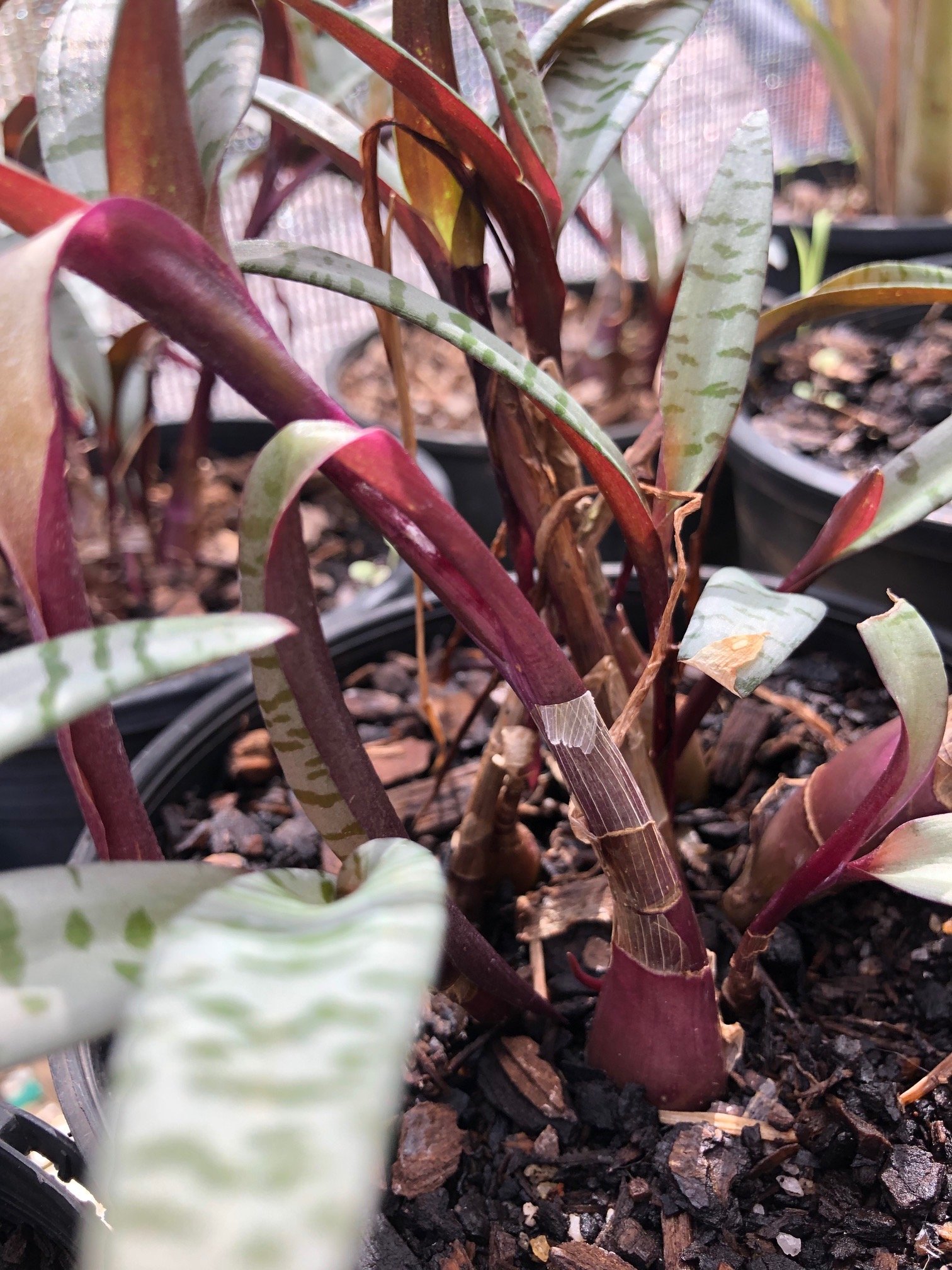 Mature specimens will become leggy over time, so it's important to provide enough natural light to downplay the rates of phototropism (growth towards the light source).

Remove yellow or dying leaves, and plant debris to encourage better-growing conditions. While pruning, always use clean scissors or shears to reduce the chance of bacterial and fungal diseases. Never cut through yellowed tissue as this may cause further damage in the likes of diseases or bacterial infections. Remember to make clean incisions as too-damaged wounds may shock the plant, causing weakened growth and a decline in health. Deadhead the individual flowers as they spend to improve the overall bloom time.

Basal Offset Division (Easy to Moderate) - Your plant will produce several basal offsets that can be separated once they have a sufficient root system, and surpass 1cm (0.4 inches) in bulb diameter. If possible, water the soil 24hrs before the main event to reduce the risk of transplant shock when its dry root systems are over-fingered. Take the plant out of its pot and place your fingers close to the nodal junction - compost may have to be removed for better access. Push the chosen offset downwards until you hear a snap. Separate the foliage and its root system away from the mother plant, mentally noting the high risk of damage. Transplant in the appropriate sized pot with a fresh batch of 'Cactus & Succulent' compost. Maintain evenly moist soil and situate it in a bright, indirect location away from any direct sunlight. After eight weeks, treat it like a healthy specimen, following the care tips above!

Silver Squills will flower from late winter until early spring, producing minute pinky-white flowers along a 30cm (11 inches) shaft, originating from the bulb's centre. Each inflorescence can last up to five days, with the overall flowering process spread across several weeks.

To achieve a winter/spring bloom, you must provide a cool and dry dormancy period. From the end of autumn to early spring, water infrequently to avert the risk of over-watering and remember to present a bright location with temperatures gently fluctuating between the day and night around 12° - 16℃ (54° - 61℉) to provide an efficient resting period. From spring onwards, the natural temperature will begin to increase, with more frequent waters and fertilisation taking place. Remember to use a potassium-based fertiliser, for example, 'Tomato' food, to maximise the chance of a bloom during the latter stages of winter. If all is successful, you'll potentially see small flower stalks develop from the centre of each bulb, lasting up to a month from late winter onwards. 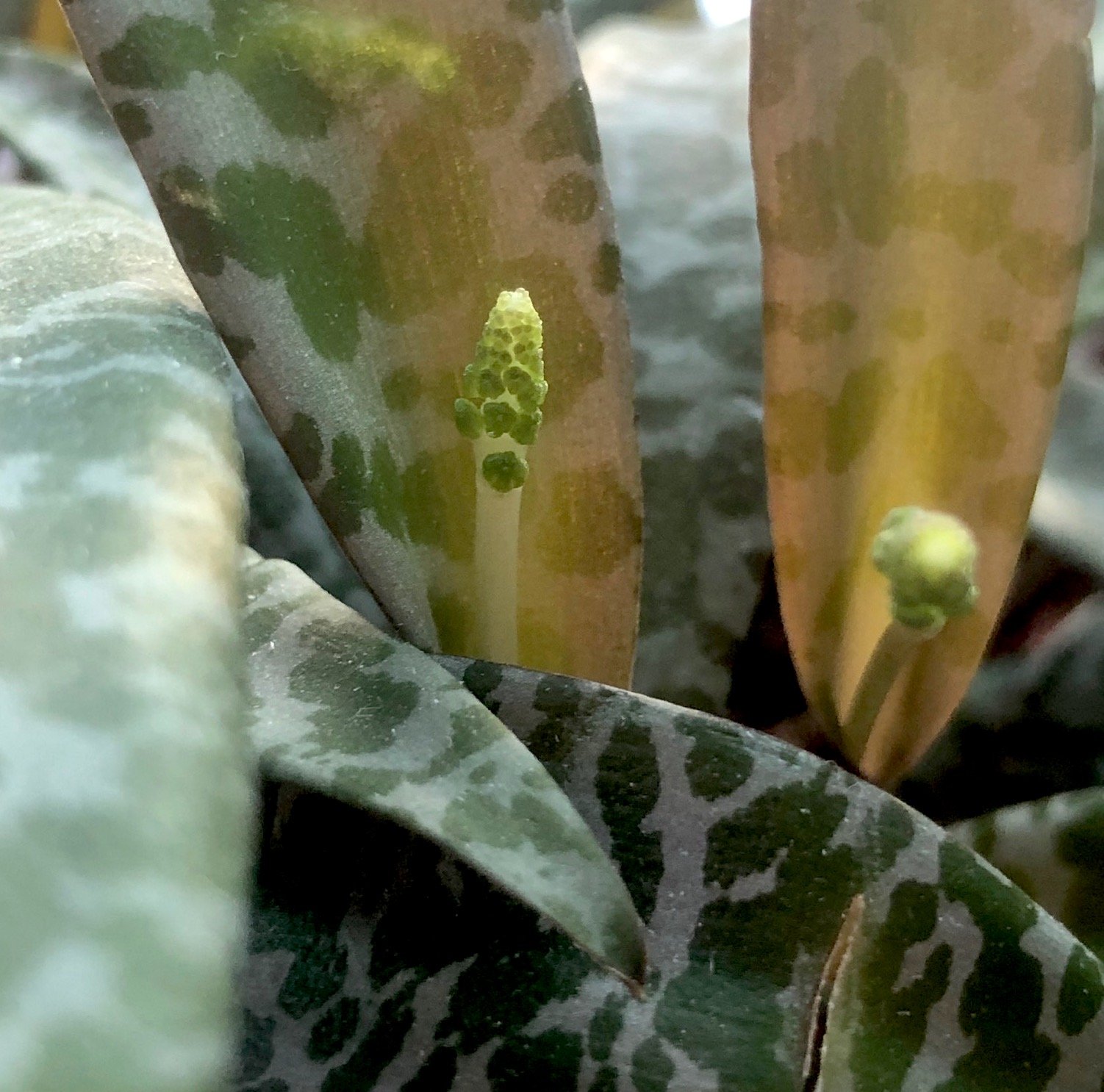 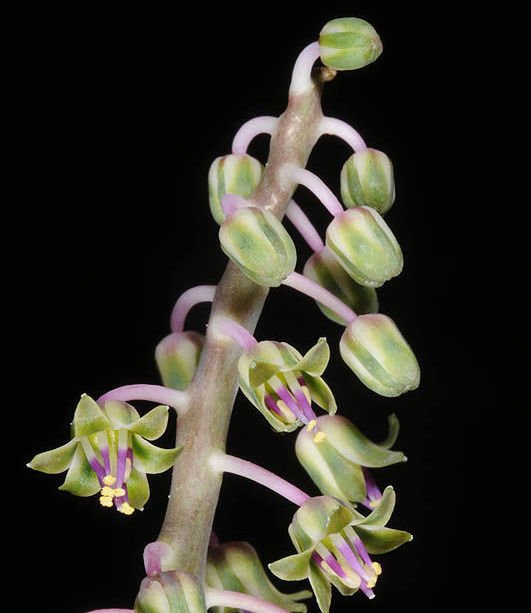 The inflorescence of Ledebouria socialis. Don't be fooled by the flower size in this photo - each individual inflorescence will only reach around 0.2cm in diameter! Copyright: The Jerusalem Botanical Gardens, Israel.

Repot every three years in the spring, using a 'Cactus & Succulent' labelled potting mix and the next sized pot with adequate drainage. Silver Squills are far better potbound for several years due to the heightened risk of root rot and repotting-issues (like transplant shock) - so only repot if you feel it's wholly necessary.

Keep an eye out for mealybugs, aphids, spider mites, scale, thrips & root mealybugs that'll locate themselves in the cubbyholes and undersides of the leaves, with the exception of the latter in soil. Common diseases associated with Silver Squills are root rot, leaf-spot disease, botrytis, rust, powdery mildew & southern blight - click here to learn more about these issues.

This species is classified as poisonous; if parts of the plants are eaten, vomiting, nausea and a loss of appetite could occur. Consumption of large quantities must be dealt with quickly; acquire medical assistance for further information. The sap can also cause dermatitis and skin allergy to sensitive individuals, so be sure to wear gloves when handling.