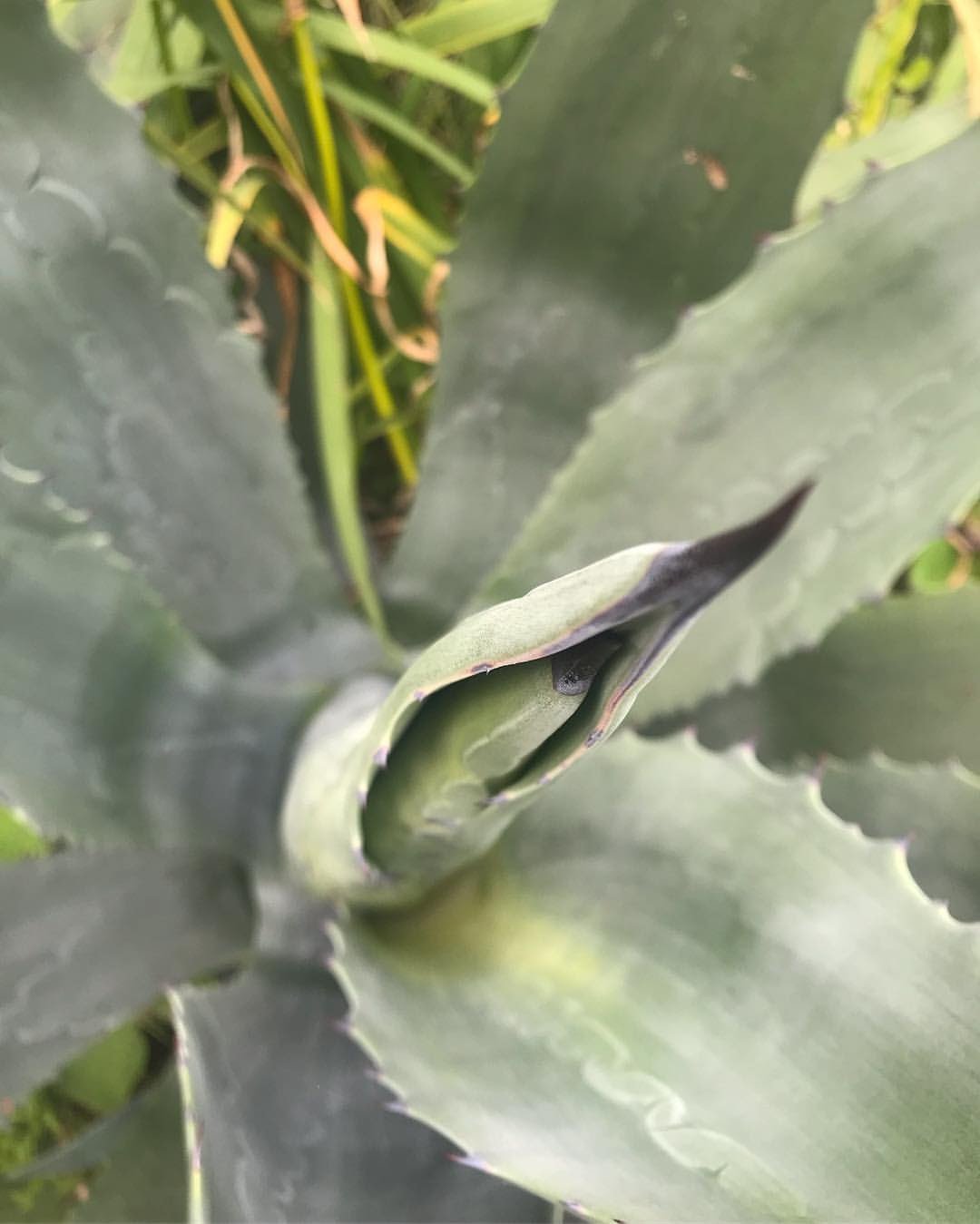 The ukhouseplants' rule of 'droughts between drenches' strongly applies to all Agaves. In the spring and summer, allow all of the soil to dry out in between waters for at least a week. During the cooler months, reduce this further to replicate its dormancy period. This genus are an excellent choice for those who are avid under-waterers, due to their ability to survive weeks on end without hydration. Under-watering symptoms are usually uncommon; however, crispy and stunted growth are possibly due to either forgetfulness or too much sunlight. Over-watering symptoms include root and stem rot, mushy yellow leaves and a rotten stem. These issues can be corrected by removing the plant out from its pot and inspecting the rootball or soil. Are the roots brown and mushy? If so, remove the affected roots and replace the soil with a well-draining potting mix (Cactus & Succulent Compost is best). Agaves are more likely to suffer from over-watering if they're situated in a dark location or in overly-moist soil.

This is not a factor; however, if your Agave is situated indoors, a quick hose down from time to time will reduce the number of dust particles covering its leaves.

Agaves are the ideal statement plant for a patio during the warmer months of the year. If it's situated indoors, a brightly lit spot accompanied by morning or evening sun is crucial for its health and turgidity. During the colder months, (below 8°C / 46°F at night), bring the plant back indoors and place in a brightly lit location with some direct sun. If the Agave is situated in a darker location, the soil must thoroughly dry out in between irrigations to combat root rot, but these locations should generally be avoided for the prevention of over-watering related diseases.

A conservatory or south-facing room is best for good quality growth. Never locate an Agave within three metres of an operating heat source, for example a fireplace or radiator as irreversible damage may occur. For newly propagated pups, be sure to avoid sun scorch and droughts.

Over-watering is the most common issue, with typical signs including a softened yellow stem and stunted growth. The soil must have periods of droughts to replicate the habitats of semi-deserts of both Americas, as well as limiting the chance of diseases. Also, avoid waterlogging; there's no point fulfilling the phrase 'drenches between droughts' if the base of the pot is submerged, as root rot will quickly arise. For more information about over-watering related issues, be sure to click on this link.

A pale centre and deformed growth are typical signs of too little light. Offer at least an hour of direct sunlight, especially in the winter months, to provide vital nutrients that'll be converted into plant sugars.

Alternatively, too much sunlight will lead to sun scorch, with typical signs including browning or crispy leaves, dry leaf-edges, sunken leaves or stunted growth. Although too little light will cause over-watering issues, too much sunlight will negatively affect the plant, too. A location that offers 2 - 4hrs of sunlight a day brings the optimum growth. If it's fallen short of sun-scorch, reduce the amount of sunlight and keep the plant sufficiently hydrated - while keeping in mind 'Drenches Between Droughts'.

Over-supplementing an Agave will bring nothing but grief in the likes of yellowing leaves and weak, dramatic growth. Although a monthly feed is an excellent way to promote healthy, vigorous growth, dry soil and sharp chemicals from the feeds will quickly lead to the burning of roots. The advice for this issue is to pre-moisten the soil beforehand; not only will this remove the chemical-edge found in fertilisers, but it will also adversely remove the chance of root burns.

A hardened brown base is part of the ageing process. If those sections are hard and doesn't give way when applying pressure, everything is okay. If, however, the base is soft, action must be taken quickly. Take the plant out of the pot and inspect its root system. If it's brown and mushed over, you'll have to discard it as the plant has collapsed from the inside out. For those that still have good root systems, keep the plant under-watered and provide a bright location with a hint of direct sunlight. The recovery process will be long, and sometimes not even successful - give it a go and see if you can resciciutate it! 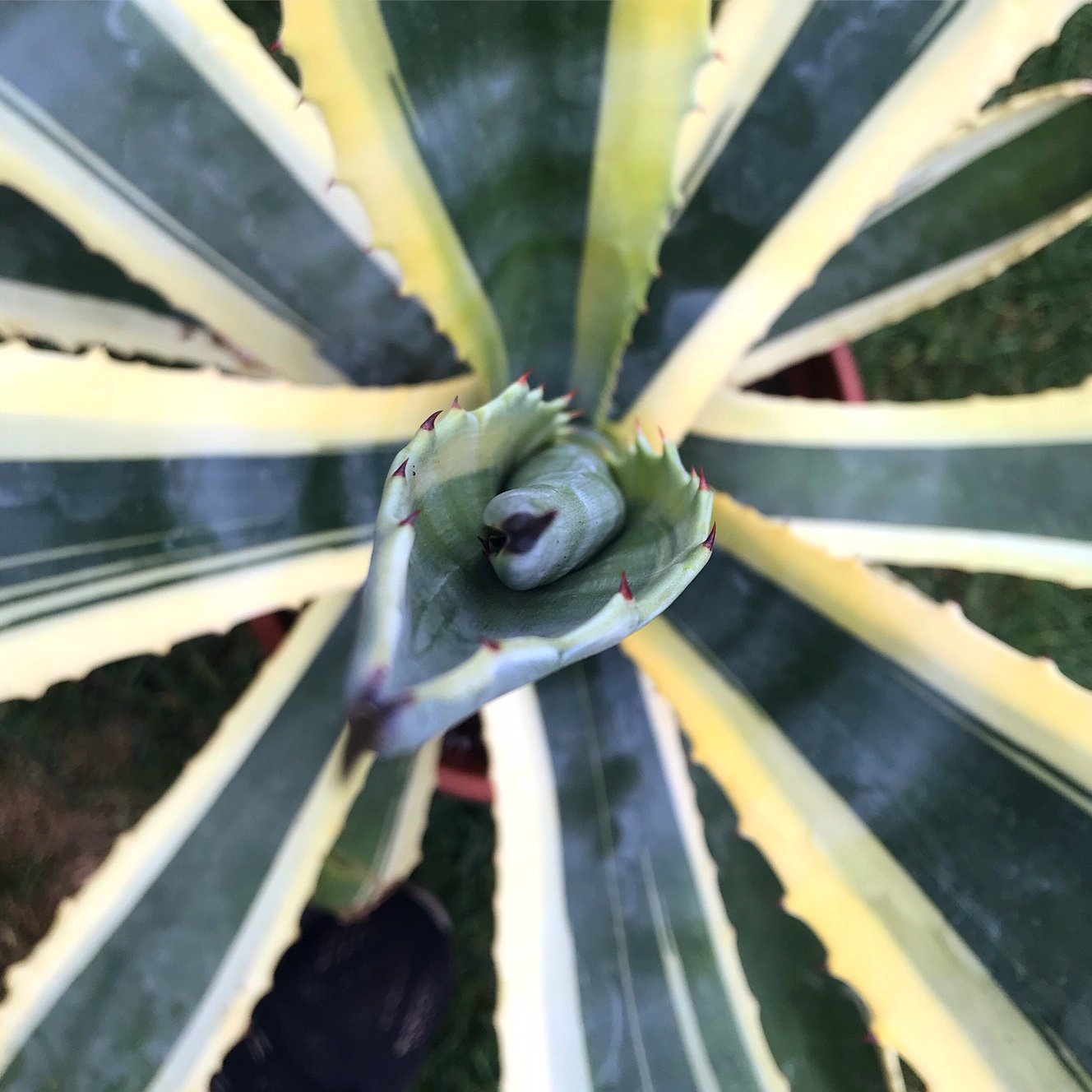 Agave consists of over 614 species, originating from semi-desert locations in Mexico, Central America and northwestern South America. The genus was first described back in 1753 by Carl Linnaeus during a trip to the Americas. The name, Agave, can be translated from Greek meaning 'admirable', due to its towering flower stalks produced in late spring. Over the millennia, the A. tequiliana has been used to produce tequila, whereas the A. americana is farmed for its sour-yeast tasting beverage, 'Pulque'.

5° - 25°C   (41° - 78°F)
H1c - can be grown outdoors in summer in a sheltered location, but is fine to remain indoors in a bright location. Always perform a pest-check before re-introducing back into the home to avoid an infestation with other plants.

Most species will reach heights of 1m in height and 1m in width when grown indoors. Growth will be slowed once it becomes potbound, so if you want a smaller specimen, only repot biannually. Ultimate height will be reached within 8 - 10 years.

Via seed or offset division. 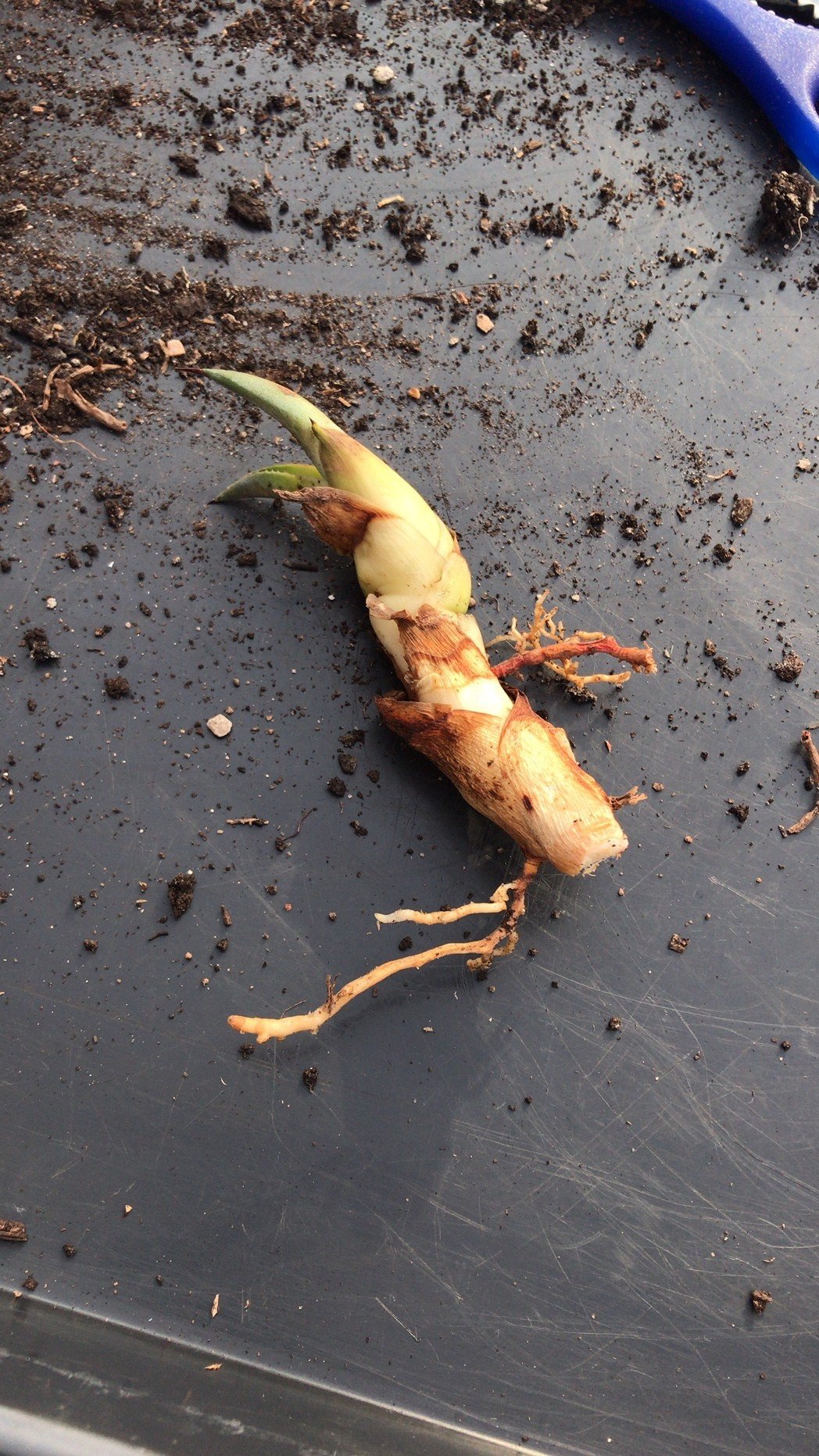 A good example of a 'pup' (basal offset) has a small root system and adequate leaves. 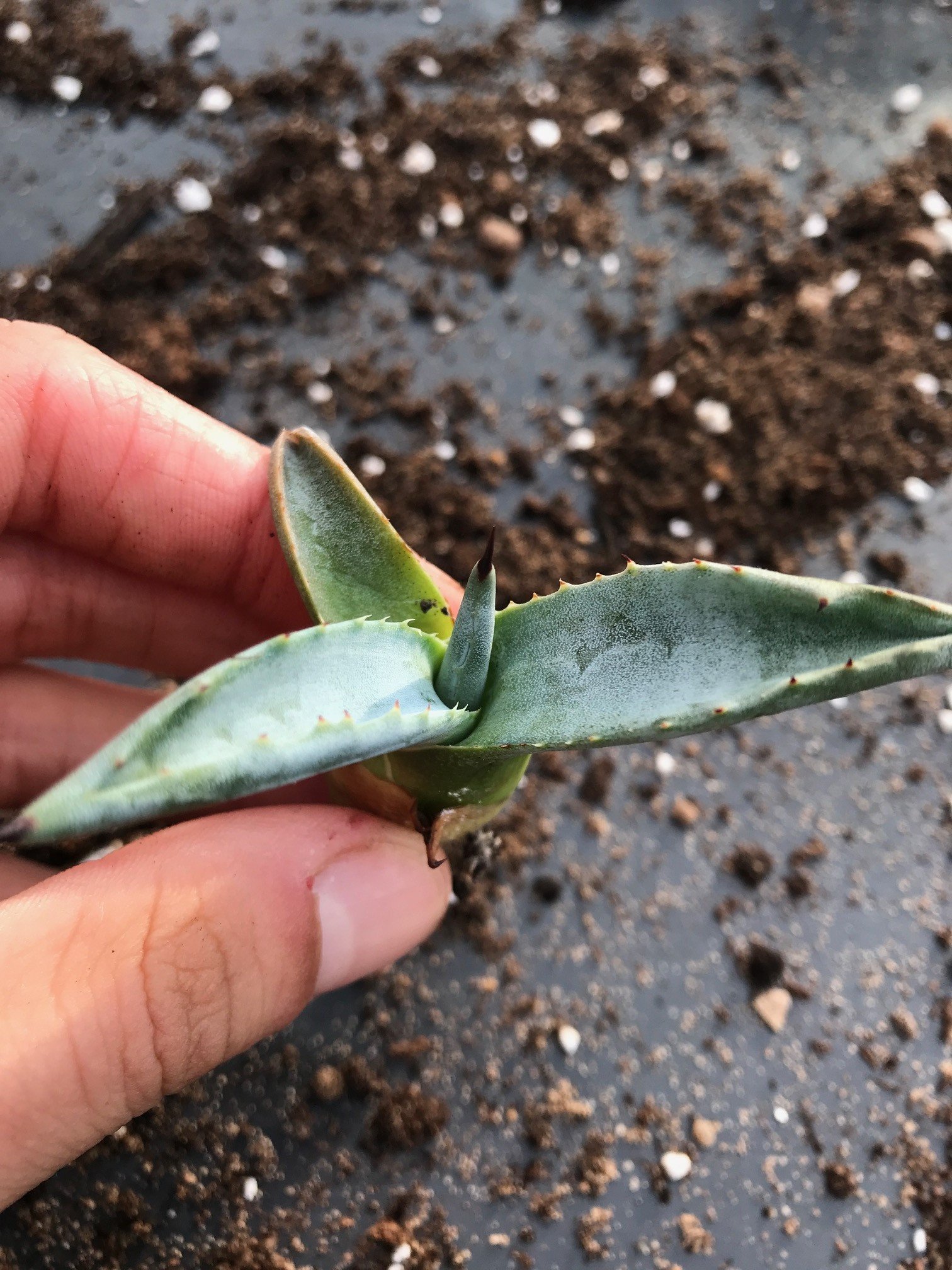 Huge tubular stalks will develop during late spring, with the blooming process lasting several weeks. The (at least) two-metre spike will produce clusters of yellow, pink, red or white flowers along the shaft, forming a tree-like structure. If pollinated successfully, the seeds can take several months to develop and can be propagated in the following spring. Mature Agaves can flower perennially in the correct conditions.

Repot every year or two using grit or sand-based compost in the spring months - Cactus Soil or a general purpose potting mix with some added grit and sand are the best options. For matured specimens, introduce more grit to promote a stronger root ball as well as the reduction of potential root rot; click on this link for more information on how to perform the perfect transplant.

Common diseases with Agaves are root rot, crown or heart rot, leaf-spot disease and powdery mildew. Keep an eye out for vine weevils (uncommon indoors), spider mite & mealybugs. For more info on how to address any of these issues, hit this link.  Identifying Common Houseplant Pests & Diseases