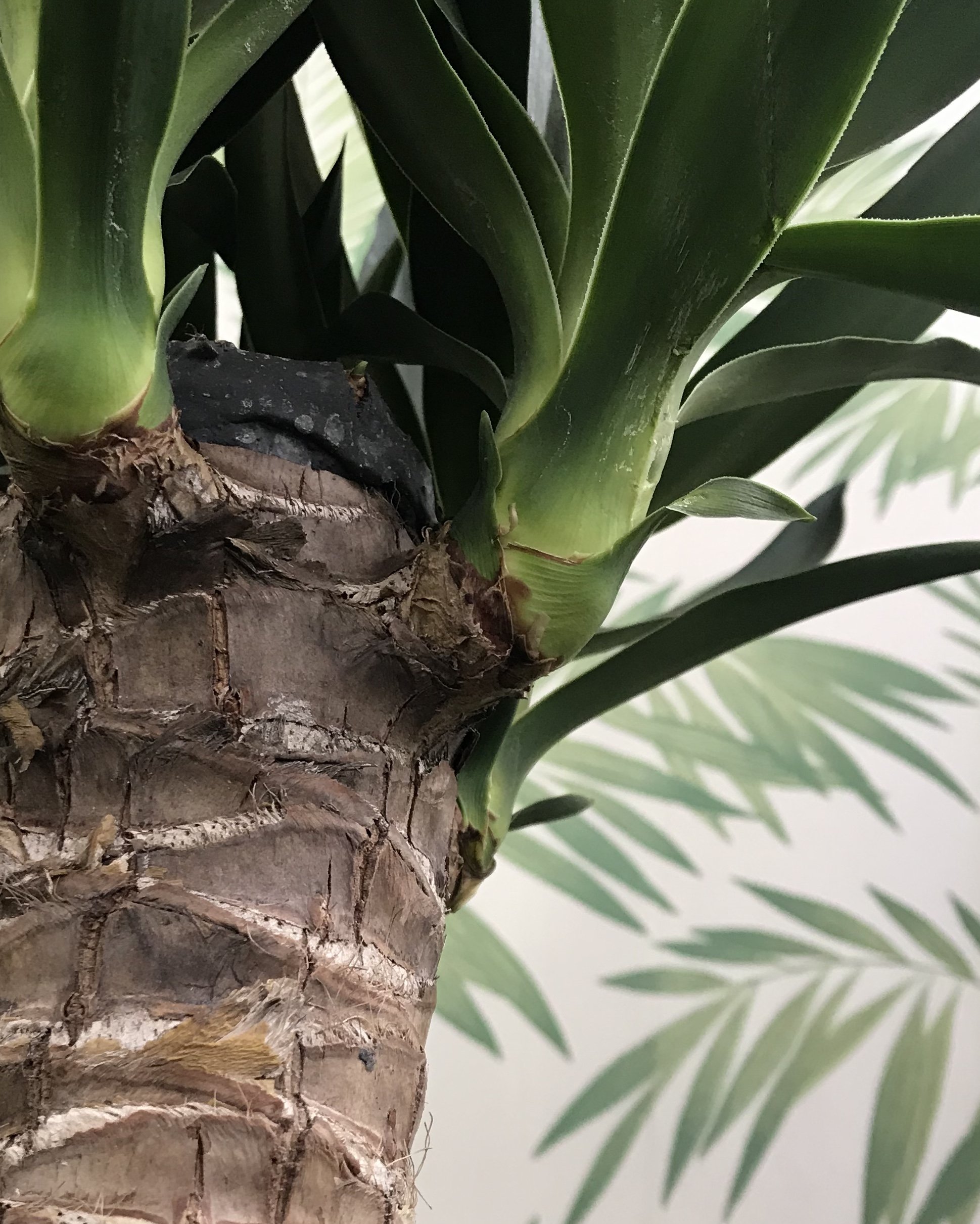 Listen to the Yucca Podcast here!

Never situate a Yucca in a location where you can't read a newspaper, as typical signs of excess darkness are stunted growth, a pale foliar crown and yellowing lower leaves. The ideal setting for this plant is somewhere that can offer a few hours of morning / evening sun, or at least with over-head lighting. A bright, warm conservatory is best, or within a few metres of a south-facing window. Never situate one in a north-facing room, especially in the autumn and winter months, as there won't be enough light during the day.

As less is more with Yuccas, be sure to allow at least half of the soil to dry out in between waters. It's recommended to either use fresh bottled water, or tap water that has been allowed to sit for at 24hrs before application. This is purely on the basis of reducing the count of fluoride, which can damage the root system over the course of a few months and is commonly found in tap water to preserve hygiene. In terms of the frequency of irrigations, the season and light levels will directly govern the amount of waters per month. Specimens placed in darker areas must endure periods of near-droughts, whereas sunnier locations will require only the top half of the soil to dry out. Under-watering symptoms include entirely yellow/brown leaves, stunted growth and greying leaves; these issues are usually down to too much light/heat or forgetfulness, but is rather uncommon among gardeners. Over-watering symptoms include spotty brown leaves with yellow perimeters and a rotting stem. Yuccas will only thrive in a bright setting; locations that are too dark will significantly increase the chance of over-watering and yellowing lower leaves.

Average room humidity is more than enough to accommodate this species. Never situate a Yucca within a few metres of an operating radiator due to the enriched chance of browning leaf-tips.

If you're someone who forgets to supplement their plants during the year, this is the plant for you. Monthly intervals is best, using either a houseplant feed or general plant food at half of the recommended strength. Never apply a 'ready-to-pour' fertiliser into dry soil without a pre-water beforehand, as this will significantly increase the risk of root-burn, with typical signs including yellowed leaves, elongated or poor growth and a general decline of health. 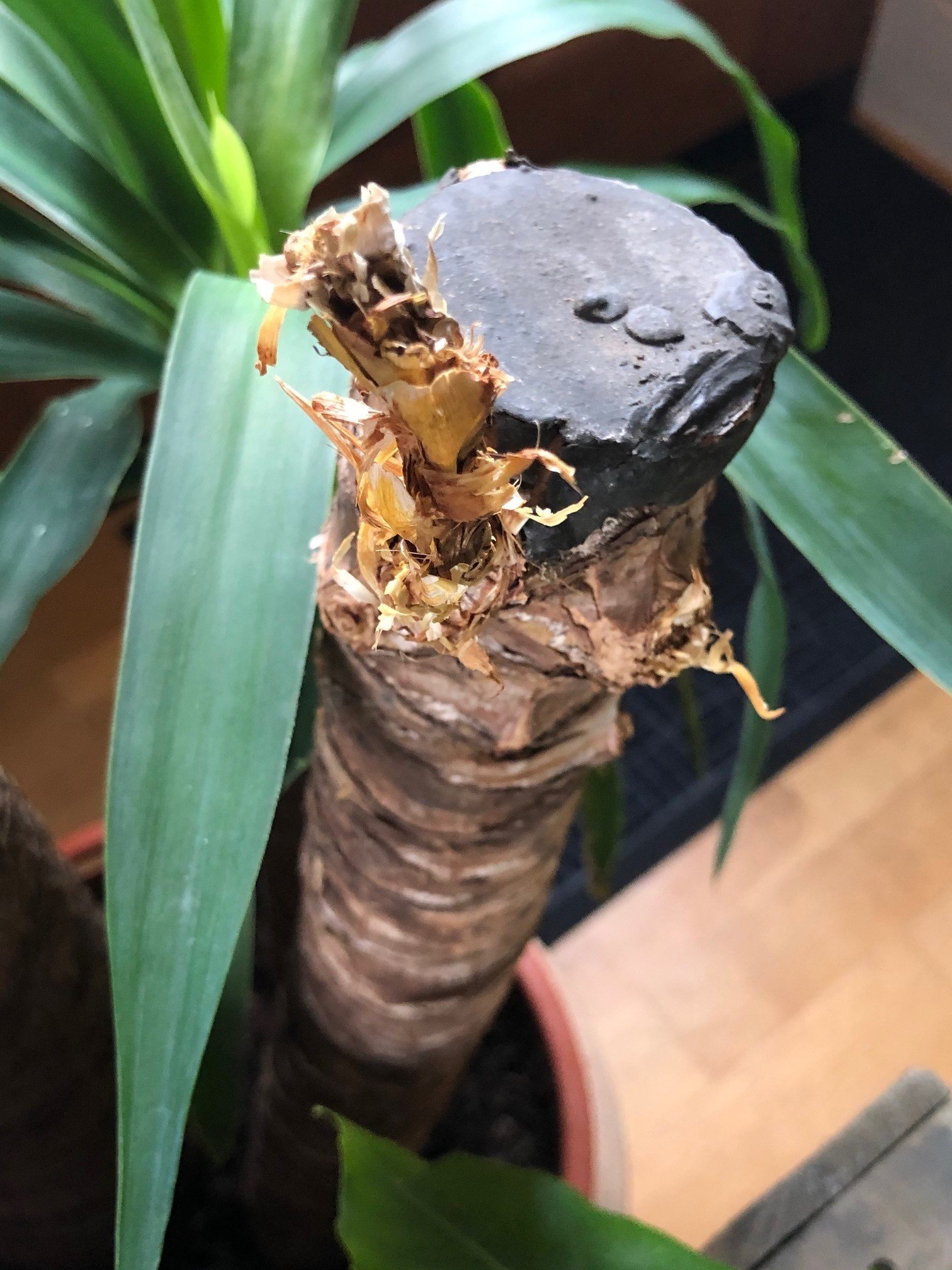 The death of a small trunk is common, but unnatural and shouldn't happen; scroll down to the last paragraph in the 'Common Issues' section for more information.

Yellowing lower leaves - A gradual loss of lower leaves is the natural part of ageing, but if there's evidence of heavy soil with yellowed foliage, remove its pot (leaving the rootball untouched) in a brighter location to aerate the soil. Root rot is the breakdown of roots when its soil has remained overly-saturated for long periods of time, suffocating them of oxygen and air circulation. Without immediate action, you'll run the risk of total destruction as the rot will slowly make its way up to the plant's base. For more information regarding this issue, be sure to click on the link above!

White leaf-edges, along with a 'washed-out' appearance, are the result of too little water and over-exposure to the sun. Although Yuccas can naturally do well in sun-filled locations, those that haven't acclimatised to the harsh rays will show signs of sun-scorch and environmental shock. Gradually increase the amount of light every few days, starting from an indirect location to a few hours of morning/evening sun over a few weeks. Prolonged exposure will significantly speed the process of dehydration, so consider transplantation into a bigger pot in the spring to wrap the roots around moister soil.

Small, brown spots are typical traits of over-watering. Coupled with root rot, leaf-spot disease is an issue among specimens that are situated in too little light with too much soil moisture. Click on the link to learn about how to address this issue.

If your specimen is located in a dark environment, use a chopstick to gently stab the soil in various areas. You should aim to enter the compost between the base of the plant and the pot's edge, as failure to do so may lead to damaging its lower portion. Leave the holes open for a few days before re-surfacing the compost to avoid it becoming overly dry. Not only will the gentle shift in the soil's structure mimic the work of small invertebrates in the wild (worms, etc.), but it'll also add oxygen back into the soil, thus reducing the risk of root rot. Repeat this monthly, or whenever you feel the potting-mix isn't drying out quickly enough.

The final issue to mention is the death of smaller trunks when arranged in a 'trio' of one pot. Although this is a common issue among horticulturalists, this shouldn't happen. The obvious cause could be over-watering and if the soil has been rather heavy for a long period of time, think about relocating it to a drier, brighter environment with an inspection for root rot. In some cases, it may be to do with too little light and not enough water. As Yuccas tend to have smaller root systems (similar to the Dracaena), their root systems won't penetrate the soil enough, thus leading to dehydration and death. If this has happened to you, be sure to remove the trunk once it fully dies off, as leaving it may cause a spread of disease. Send us an email via this link or a DM on Instagram if you're stuck with what to do next!

The Yucca gigantea was first formally described in 1859 by a French botanist named Charles Lemaire. Although this is the official name of the species, some still refer it to Y. guatemalensis, which was named by Baker in 1872, or E. elephantipes due to its thickened stems when cultivated in Europe. The flower, Izote, is the national flower of El Salvador. The species primarily originates from central America but has been introduced in other semi-arid climates around the world within the last century. 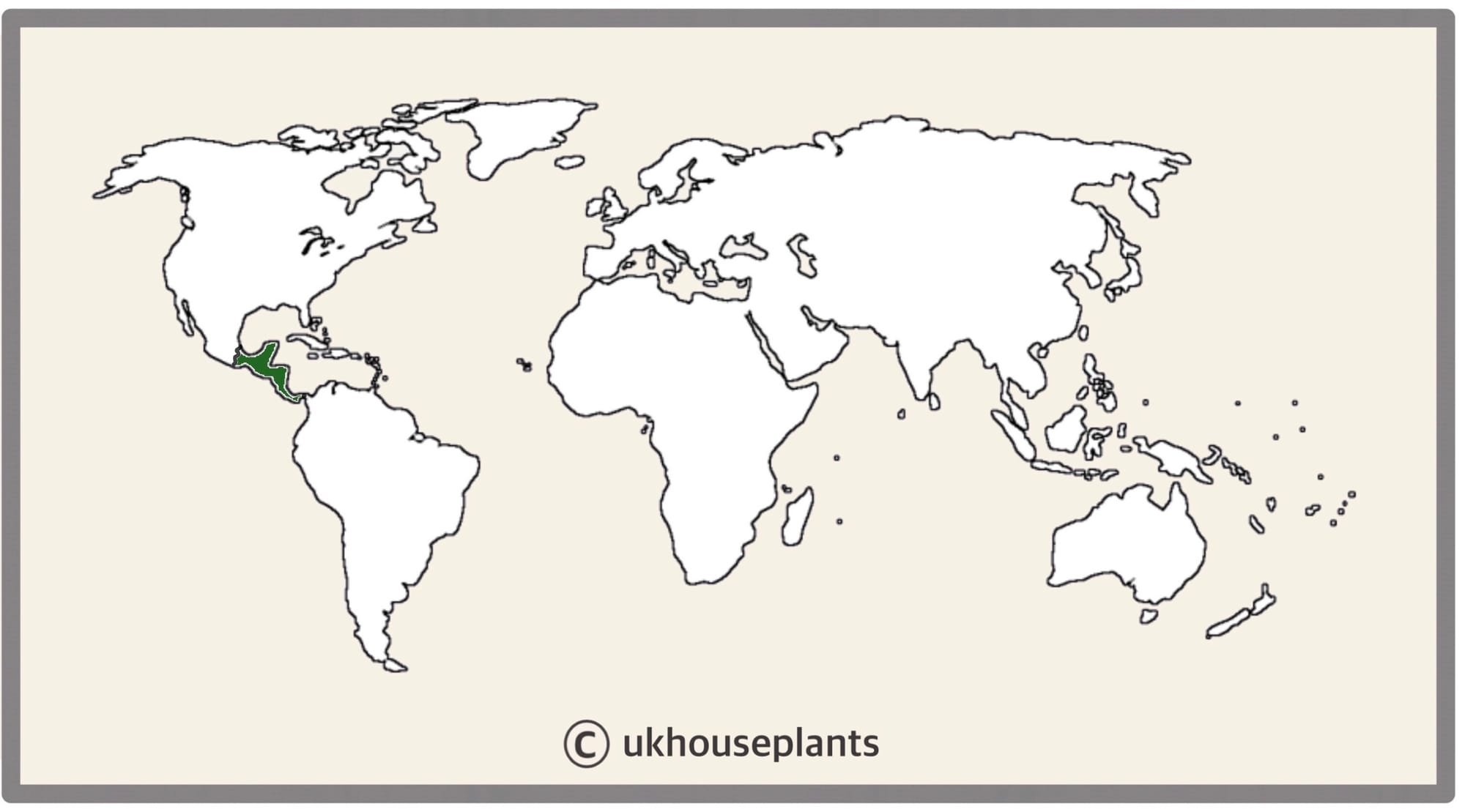 10° - 32°C   (50° - 90°F)
H1c  (Hardiness Zone 11)  - Can be grown outdoors between late spring and summer throughout most of the UK while nighttime temperatures are above 10℃ (50℉). If you decide to bring the plant outdoors, don't allow it to endure more than an hour of direct sunlight a day as it may result in sun-scorch. Regularly keep an eye out for pests, especially when re-introducing back indoors.

Over 2m in height and 0.7m in width once they reach maturity. The ultimate height will take between 5 - 10 years to achieve, with 15cm of growth being put out per year.

Remove yellowed or dying leaves and plant debris to encourage better growth and all-round appearance. Pruning must be done with clean scissors or shears to reduce the chance of bacterial and fungal diseases - remember to make clean incisions as too much damage can shock the plant.

The time in which it takes Yuccas to flower greatly depend on its level of maturity and its growing conditions. If the dormancy period is served well during winter, white flowers arranged in panicles will develop high above the foliage, lasting several weeks.

Repot every three years in the spring using a Cactus & Succulent Compost and the next sized up pot. Whilst transplanting your Yucca, be sure to support the stem of the plant as they're top-heavy and prone to toppling over. For matured specimens, introduce more grit to promote a stronger root ball - hit this link for more information on how to perform the perfect transplant.

This plant is classified as poisonous so keep away from pets and children who have tendencies to eat the leaves. If parts of the plants are digested, vomiting, nausea and a loss of appetite could occur. Consumption of large quantities must be dealt with quickly; acquire medical assistance for further information. Please note that the leaves' edges are also razor sharp, so always wear protective gloves when handling.