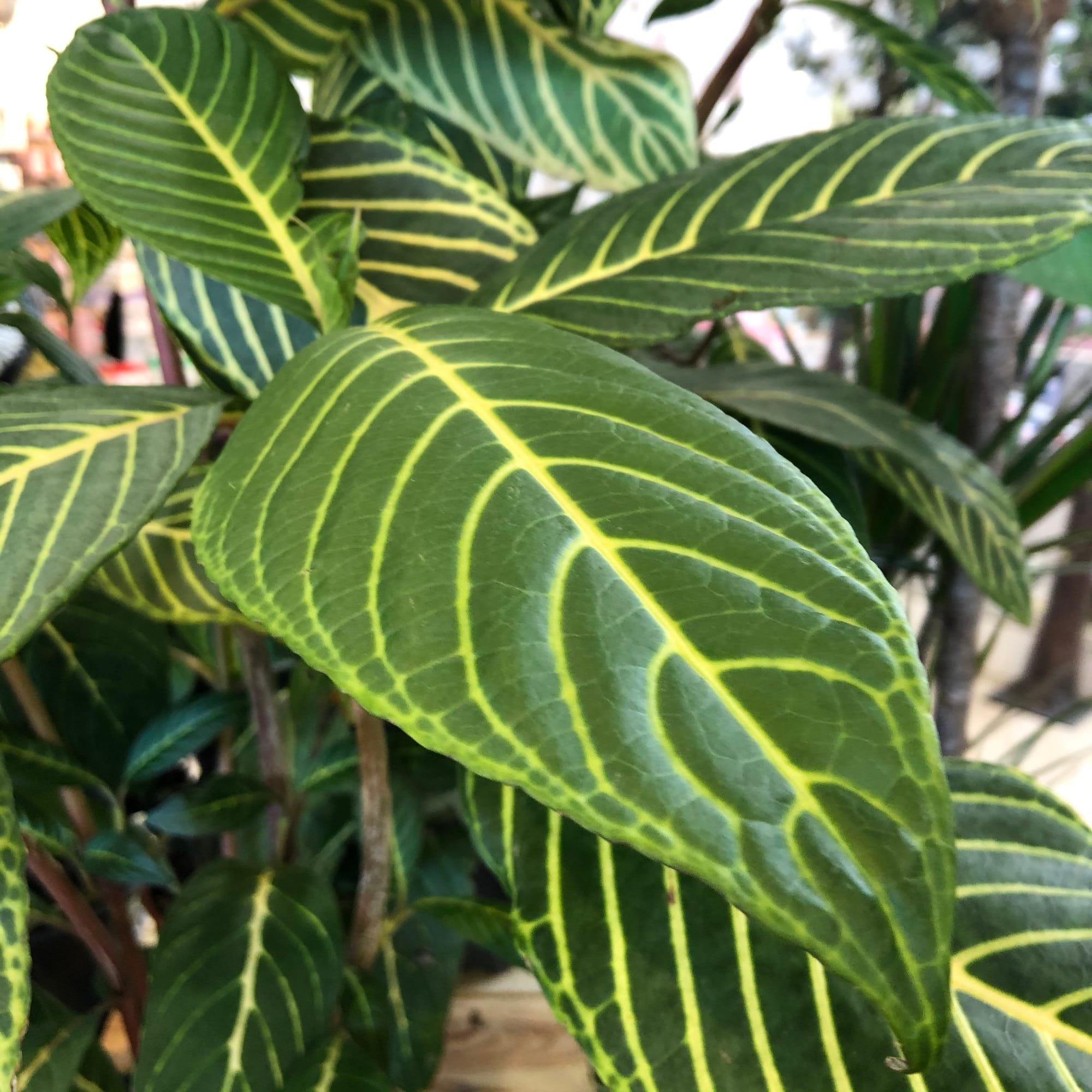 Sanchezia prefer to be sat in medium light with the absence of deep shade. As you'll have to keep the soil relatively moist, the risk of soil mould and over-watering is considerably increased when maintaining too little light.

Once the autumn kicks in, be sure to include an hour or two of direct light per day to get it through the dormancy period, lasting until the following spring. Remember - sharp exposure to the sunlight during the spring or summer of more than an hour will negatively affect the plant. We'd recommend placing yours near a north, east or west-facing window, or within two metres of a south-facing window (to avoid sun-scorch).

Your plant will best grow in reliably moist soil, as inconsistent moisture levels may result in stunted growth and an unhappy plant. Allow the compost's top third to dry out in between waters in the growing period, reducing this further in the autumn and winter. If you're unsure as to when the plant needs a water, if the pot feels much lighter when lifted than when it was previously hydrated, it's time for another drink. Whilst the pot is heavy, the plant is still adequately hydrated and therefore won't need a further drench. Under-watering symptoms include a shrivelled stem, yellowing leaves, stunted inflorescences, little to no growth and dry, crispy patches forming on the leaf edges. These issues are usually caused by too much light/heat or forgetfulness. Remember, the brighter the location, the more watering you'll need to do. Over-watering symptoms include a weakened or rotten stem, no new growth, yellowing lower leaves and eventual plant death. Click here to learn more about root rot and how to address it!

Create a humidity tray to provide a moist and stable environment for your plant. If the surrounding saturation is too low or the heat too high, its leaf-tips may start to brown over and curl, especially in direct sunlight. Gently hose the foliage down from time to time to hydrate the leaves and keep the dust levels down.

An array of simultaneous cultivation issues will increase the chance of developing yellowed leaf-sections with browned halos - see image below for visual reference. Firstly, the location may be too dark, with its compost staying too saturated in-between waters; if mould is growing across the soil, this is usually a bad sign. Further, you're potentially using too cold water or tap water that hasn't been allowed to sit for 24hrs. This period of rest will not only bunk-up its temperature, but the harsh chemicals used to preserve water hygiene (fluoride & chloride) will begin to settle after a few hours. If possible, use fresh bottled water from a shop or supermarket to prevent further chemical burns. The final culprit might be lack of fertilisation, with regular feeds being paramount for long-lasting, healthy leaves. If the specimen hasn't been nourished in over two months, it'll begin to show signs of nutrient deficiencies seen in this article.
If this common problem has occurred with your specimen, remove the affected leaves (not sections on the leaf) and improve the growing conditions considerably. Fertilise regularly with lukewarm water and be sure to allow the top third to dry out in between hydrations. Its new growth should be problem-free, but if you'd like to speak to ukhouseplants for more advice, don't be afraid to book a 1-to-1 call with our friendly author, Joe Bagley! White powder-like substances found on the stems is nothing to be worried about, and is part of maturity as it ages.

Curled leaves and brown leaf-edges are the result of too little water and over-exposure to the sun. Sanchezia are best located in bright, indirect settings with only a splash of morning pr evening sunlight at the very most. Those that haven't acclimatised to the harsh rays will show signs of sun-scorch and environmental shock. A splash of winter sunlight is acceptable as long as the soil moisture is regularly observed, with complete avoidance once summer comes along. Reduce the amount of sunlight received and continue to keep the soil moist. Although the older leaves will forever remain damaged, its new growth should be good as new! 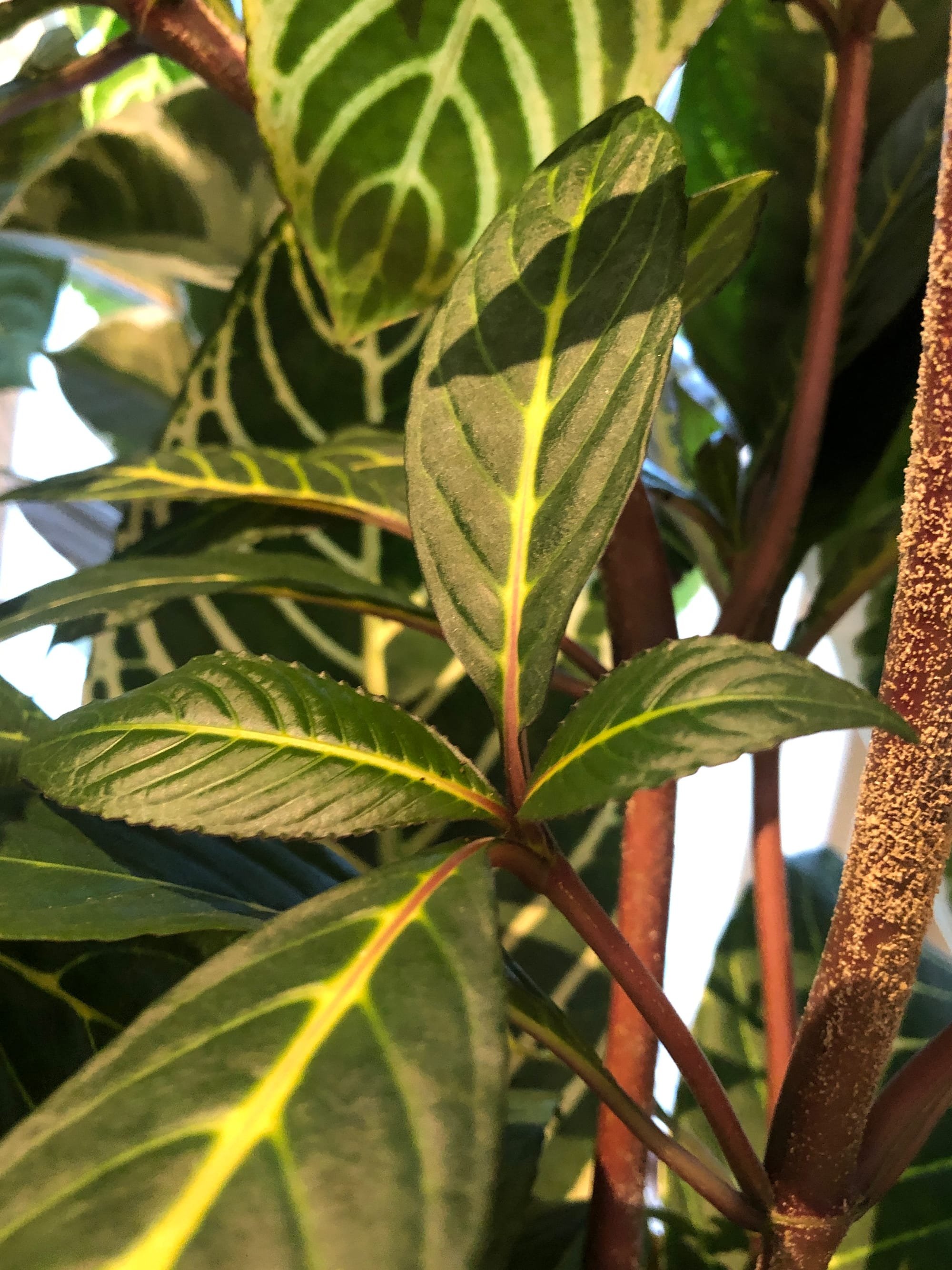 Sanchezia speciosa is an amazing houseplant to have in your collection, as long as you provide a location with warmth, bright light and reliable moist soil.

Sanchezia speciosa was formally classified in 1926 by American botanist, Emery Clarence Leonard, during a voyage to South America. The name, Sanchezia, honours 19th-century Spanish botanist, José Sanchez, whereas speciosa can be translated from Latin to mean 'showy' (referring to the contrast between the red flowers and golden foliage). 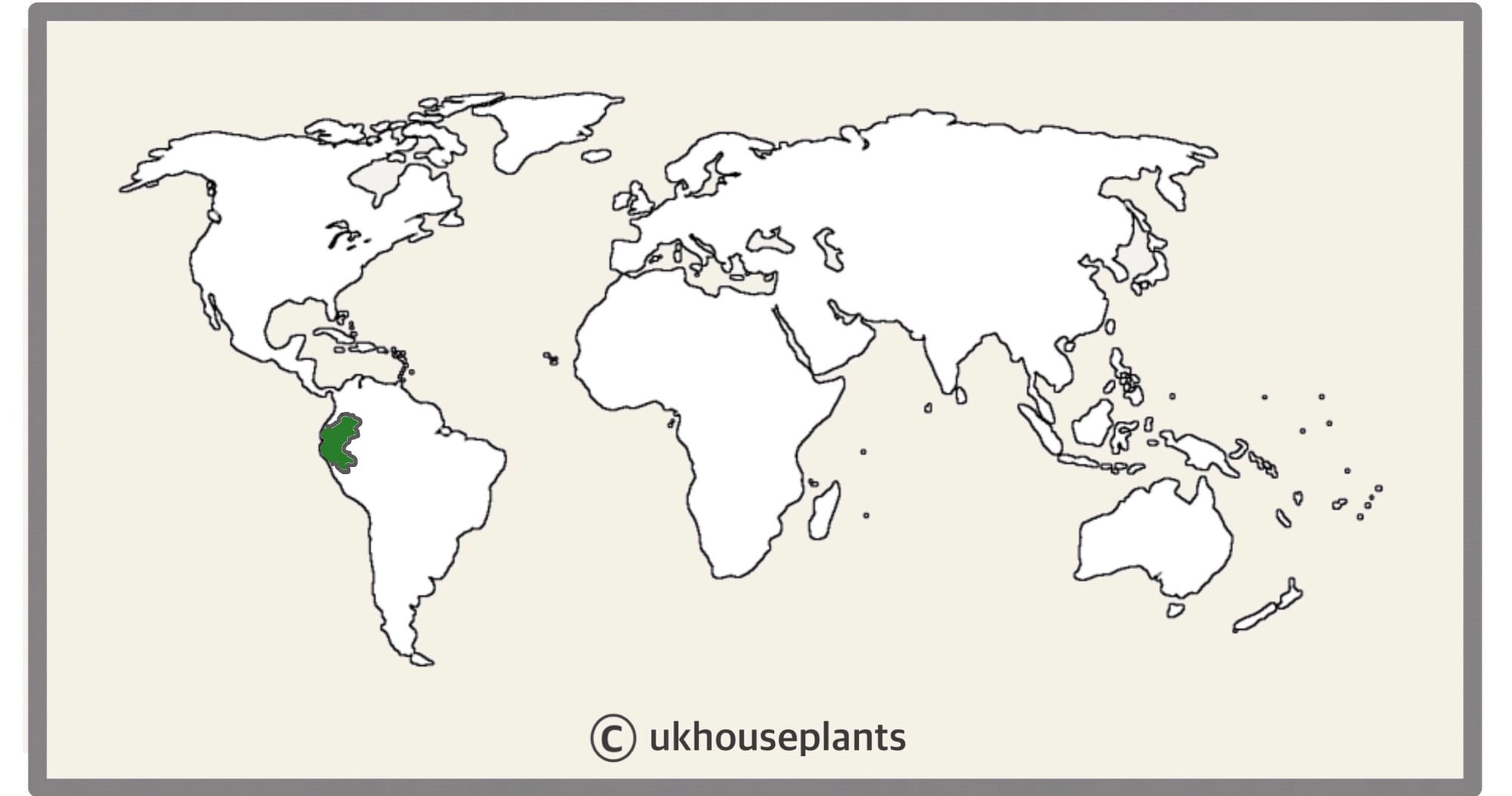 The Distribution of Sanchezia speciosa.

15° - 27℃   (59° - 80℉)
H1b  (Hardiness Zone 12)  - Can be grown outdoors during the spring and summer in a sheltered location whilst nighttime temperatures are above 15℃  (59℉),  but is fine to remain indoors, too. If you decide to bring this plant outdoors, don't allow it to endure more than an hour of direct sunlight a day as it may result in sun-scorch. Regularly keep an eye out for pests, especially when re-introducing it back indoors.

The overall size can be up to 1.2m (4ft) in height and 0.5m (2ft) in width. The ultimate size will take between 5 - 8 years to achieve when repotted every two years, with several new leaves unfurling per annum.

Via Seed or Stem Tip Cuttings.

Stem Tip Cuttings (Moderate) - This method is an easy way to duplicate the original plant. Stems that are at least 10cm (4 inches) in height and part of an established plant are most successful. To avoid making a mess of the serrations, use a clean pair of scissors and cut 8cm down from the stem's end, dipping the wound in water and then into rooting hormone to speed the propagation. Rooting can take in the range of between two to eight weeks, depending on environmental factors and the cutting's quality. We recommend using a 'Houseplant' labelled potting mix, with a pot that has adequate drainage to avert the risk of blackleg. Provide a bright, warm setting of around 18℃ (64℉) with relatively moist soil, but be sure to allow the top half to dry out in between waters. You'll know if propagation is successful as the leaves will stay green and firm, along with small roots developing from the callous (dried wound). New foliar growth will emerge from the nodes after around twelve weeks, but it may take longer if the conditions aren't optimal. After a month of solid new foliar growth, transplant into a slightly bigger pot and treat it like a mature specimen with the care tips provided above.

Sanchezia speciosa will produce a cluster of red flowers along a thick shaft that develops from the stem's centre. Unfortunately, it's unlikely for a domestically-grown specimen to flower indoors due to the unfavored growing conditions.

Repot every two or three years in the spring, using a 'Houseplant' labelled potting mix and the next sized pot with adequate drainage. Sanchezia are far better potbound for several years due to the heightened risk of root rot and repotting-issues (like transplant shock) - so only repot if you feel it's wholly necessary.

Considered slightly poisonous when consumed by pets and humans. If large quantities are eaten, it may result in vomiting, nausea and a loss of appetite.