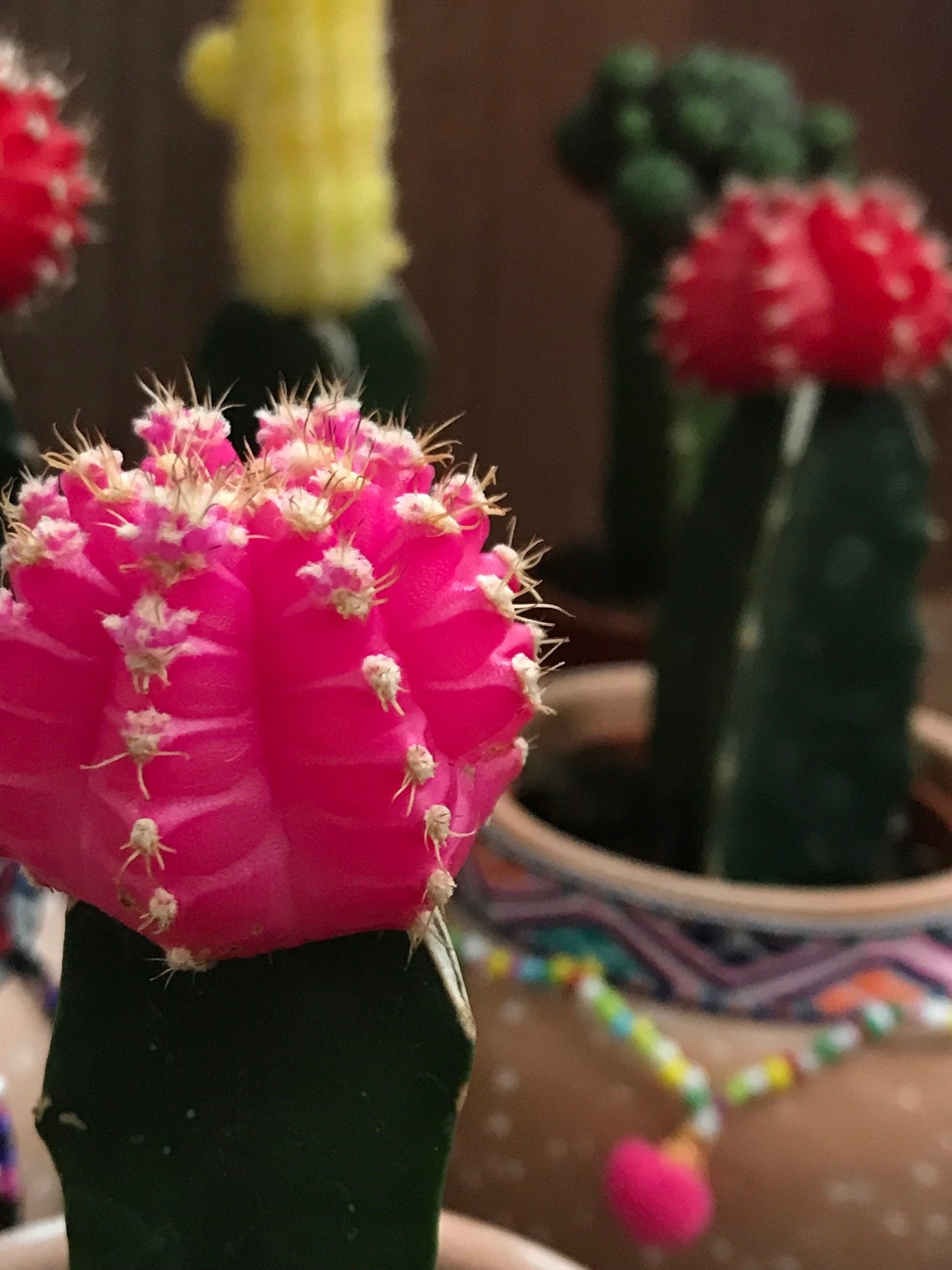 This product is actually grafted, with the coloured top being a Gymnocalycium mihanovichii and the rootstock (or basal plant) being a Selenicereus undatus. (better known as the Dragonfruit Plant!)

Moon Cacti like to be seated in a bright location with a splash of morning or evening sun. Remember not to over-expose your specimen to the rays though, as it still may result in sun-scorch and dehydration. We'd recommend placing it on an east or west-facing window, or somewhere that boasts bright indirect light at the very minimum. The greatest amount of sunlight for this plant is around four hours per day.

These specimens are an excellent choice for those who frequently under-water their houseplants. Allow ALL of the soil to dry out in between waters, avoiding the use of too cold water if possible for maximum root growth. Under-watering symptoms include a shrivelled stem, yellowing leaves, little to no growth and dry, crispy patches forming on the leaf edges. These issues are usually caused by too much light/heat or forgetfulness; remember, the brighter the location, the more watering you'll need to do. Over-watering symptoms include a weakened or rotten stem, no new growth, yellowing lower leaves and eventual plant death. The differences between under and over-watering can be very similar, with a rotten base being the obvious difference.

Supplement every two months using either a 'Cactus & Succulent' or a 'Houseplant' labelled fertiliser. As Gymnocalycium and Dragonfruit both naturally grow in nutrient-leached soils, forgetfulness won't be a serious detriment to their overall health. Never directly apply a 'ready-to-use' (RTU) without a pre-water first as this may lead to the burning or roots.

If the coloured top begins to brown and rot, it's most likely to do with too saturated soil or waterlogged conditions. Take the plant out of the pot and inspect the roots as they'll tell a lot about the plant's wellbeing. If the roots sport a yellow tinge, you're good to go, but if they're brown and mushy, action must be taken immediately. If the base of the plant (the Dragonfruit) begins to rot as well, discard the whole specimen. Alternatively, if only the base begins to rot, remove the scion (coloured top) and place it a quarter into a fresh batch of 'Cactus & Succulent' labelled compost. Keep the soil mostly saturated for the first month, before following the phrase 'drenches between droughts' again. Discard the base as it'll only spread across the whole plant.

In some cases, the scion will lose its colour. If the whole specimen doesn't show signs of rot and you know for sure that it isn't over-watered, don't worry too much. If, however, the base begins to brown over, scroll to the paragraph above for more information about this!

Never allow temperatures to dip below 12ºC (54ºF) as irreversible damage may occur in the likes of yellowed foliage and weakened growth. If this happens, remove the severely affected areas and immediately improve growing conditions - never cut through softened yellow growth, and only around brown, crispy squares. As rehabilitation can take several months because of its slow-growing nature, be sure to provide a stable location with better growing conditions to speed this process.

As this product is two separate species grafted together, it's origins are slightly different. Unfortunately, there isn't too much information on when it was first commercialised, so this section will only be mentioning the two species' taxonomic history.

Gymnocalycium mihanovichii was initially documented as 'Echinocactus mihanovichii' in 1905 by Frič & Gürke, before being shifted in the current genus seventeen years later. Britton & Rose acknowledged the species' name, which honoured botanist Nicolas Mihanovich, but placed it within the Gymnocalycium genus after documentation and research.

The rootstock plant's original name, Hylocereus is an epiphytic or lithophytic genus originating from Central America. It was first described by Britton & Rose in the early 20th century, using the Greek and Latin words hyle, meaning wood, and cereus, referring to its 'waxy' nature. The current name of the species, Selenicereus undatus, also originates from Latin, with the first section translating to 'moon' (Selḗnē) in reference to its appearance. The species epithet, undatus, translates to 'wavy edges' which refers to the rib-like structure of the stem. 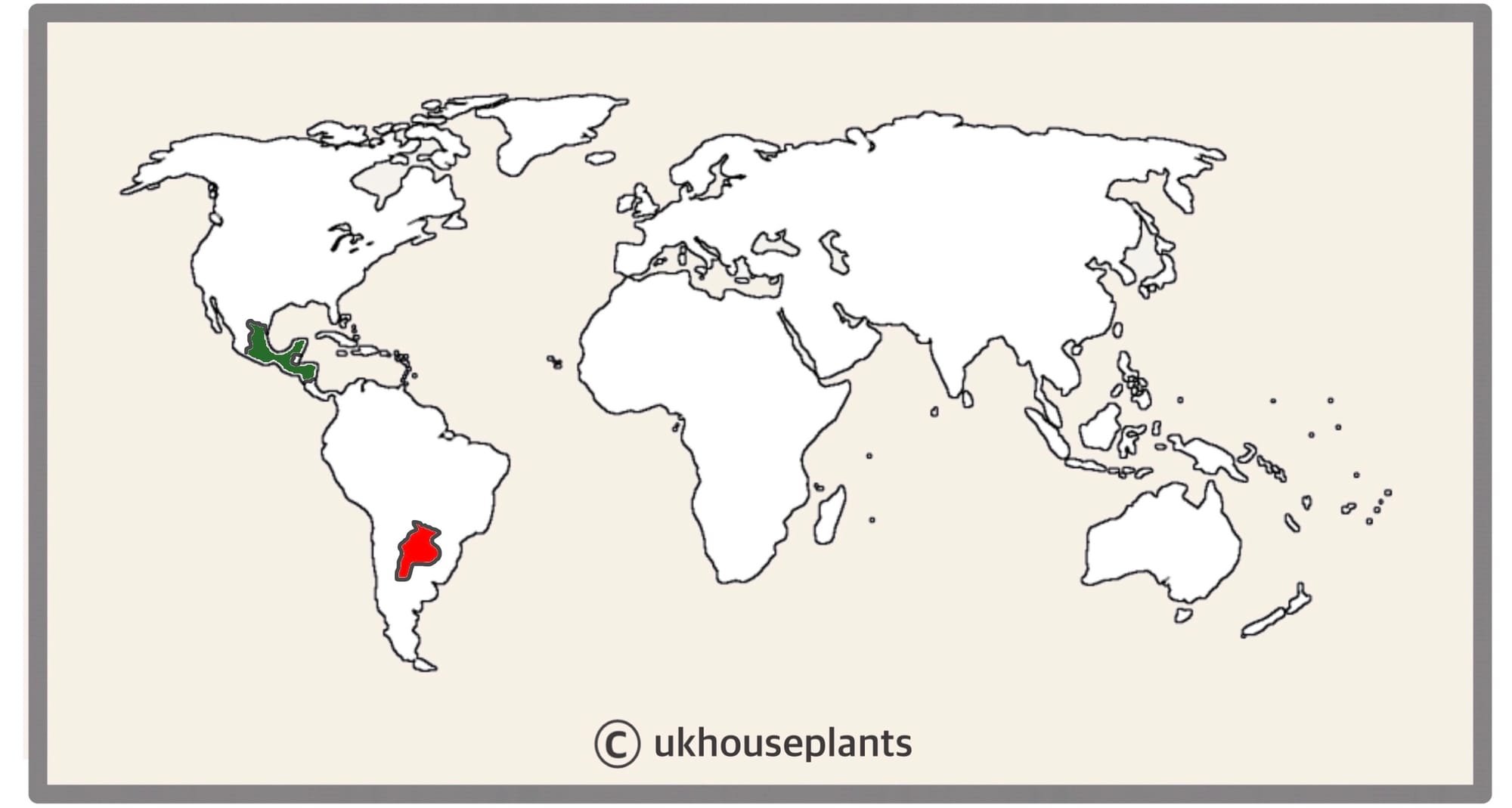 The Distribution of Gymnocalycium mihanovichii in Red & Selenicereus undatus (Dragonfruits) in Green.

15° - 32℃   (59° - 90℉)
H1a  (Hardiness Zone 12)  - Can be grown outdoors during the spring and summer in a sheltered location whilst nighttime temperatures are above 15℃  (59℉),  but is fine to remain indoors, too. If you decide to bring this plant outdoors, don't allow it to endure more than three hours of direct sunlight a day as it may result in sun-scorch. Regularly keep an eye out for pests, especially when re-introducing it back indoors.

The individual rates of both species' growth are much different when kept separately in their own pots, but as a 'duo', their rates will be almost nil. Generally, the rootstock (Dragonfruit) may produce lateral branches over time, which can be propagated via the link of the 'Propagation' section.

If either of the two species is beginning to rot, scroll up to 'Common Issues' for more information on removing or separating them!

Only the rootstock (Dragonfruit) can be propagated successfully if it produces a lateral branch (Stem Cuttings). Click here and scroll to 'Propagation' to learn more.

This product won't flower in its lifetime; however, the species (when individually grown) may flower once they hit maturity of a few years. Gymnocalycium mihanovichii will product several small pinky-white flowers in the late winter across the top half of its 'crown', whereas the Dragonfruit's flower is rather large and sweetly-scented.

Repot every three to four years in the spring using a 'Cactus & Succulent' labelled potting mix and the next sized pot with adequate drainage. Moon Cacti are far better potbound for several years due to the heightened risk of root rot and repotting-issues (like transplant shock) - so only repot if you feel it's wholly necessary.

This plant is slightly poisonous. If parts of the plants are eaten, vomiting, nausea and a loss of appetite could occur. Consumption of large quantities must be dealt with quickly; acquire medical assistance for further information.