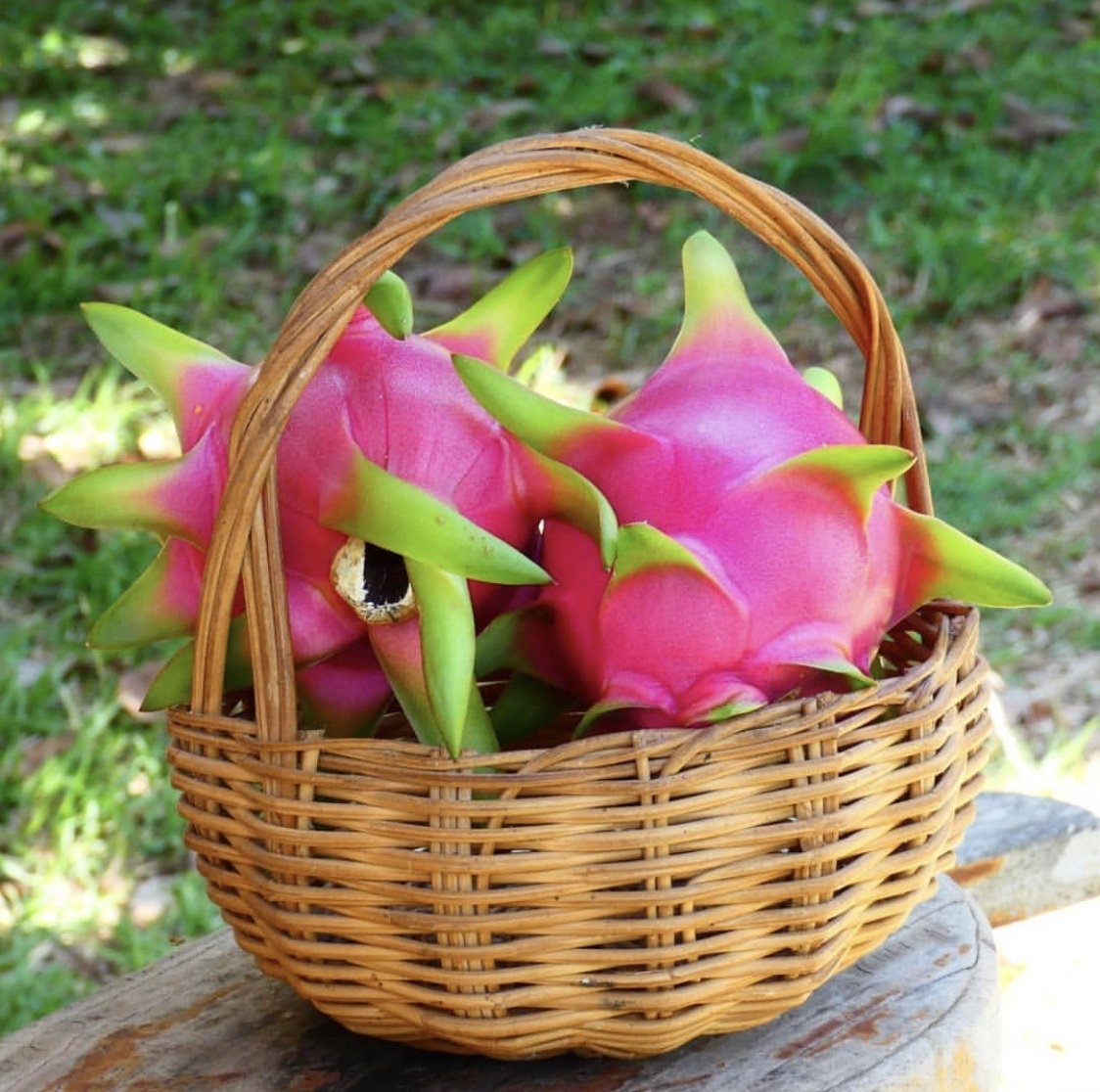 Because of the water-swollen stems, Hylocereus can withstand several weeks without water. Although it’s not ideal to regularly test this ability, it’s good to know if you’re away for a few days. Allow the top third of the soil to dry out in between irrigations - once the pot begins to feel light, it's time for hydration. Reduce this further during winter to replicate their dormancy period, along with eradicating the risk of over-watering during winter. Whilst in bloom, avoid the use of cold water due to the species' sensitive nature to sudden temperature changes. Under-watering symptoms include little to no new growth, a much-needed transplant and drying leaves - remember, although they're in the cactus family, they originate in tropical locations meaning soil moisture and humidity should be generous. Over-watering symptoms include yellowing leaves that soon drop off, no or little growth and root rot. These are common with too much soil moisture, an improper soil medium or too low light. As with most houseplants, under-watering is far better than over-doing it, as each species has evolved to optimise water retention in case of drought. If the bottom of the stem becomes brown and mushy, the chances are root rot has occurred - keep reading to find out more.

A generous level of humidity should be at the forefront of successful cultivation. During the autumn and winter, a weekly mist or the introduction of a humidity/pebble tray will help replicate its moist habitat in the Brazilian forests. The use of artificial humidifiers aren’t needed once the heaters have been switched off in the summer months.

Although bright, indirect light is favourable, throw in some morning or evening sun to aid quality growth. A position that offers more than two hours of strong direct light must be kept off the cards, due to their susceptibility to sun-scorch. Alternatively, a setting where a newspaper cannot be read should also be turned away, as the chance of root rot (especially over winter) is heightened.

A location within three metres of a north, east or west-facing window, or below a skylight window are the optimum areas. For established specimens that are liable to bloom, place in a cool conservatory with nighttime temperatures around 12°C  (54°F)  during the autumn and winter months. This will help ease them into the dormancy period, which is critical for a flowering plant.

Supplement monthly using a houseplant or general plant fertiliser. Providing too nutritious soil will result in leggy growth in the summer.

Whilst the plant is budding or in bloom, swap for a potassium-based feed, for example tomato food, to prolong the flowering process. Never directly apply a RTU (ready to use) feed without a pre-water first, as this will result in root burn and yellowed leaves.

Root rot is a big issue with symptoms including yellow lower leaves, stunted or softened growth often accompanied by vine collapse. Take the plant out of the pot and inspect its root systems. Yellow roots symbolise good health, however, if it's brown and mushy with soggy soil, action must be taken immediately. More information about addressing root rot can be found on this link.

A brown or rotten base is also another byproduct of over-watering - a common issue in winter. If the majority of the trunk has rotted over, stem cuttings must be taken to save the remaining section of the plant. Scroll down to ‘Propagation’ for more information!

For smaller compact specimens, yellowing central leaves or a naked base are products of excess moisture being allowed to sit on the foliage, commonly sped up by too little light or poor air circulation. Although watering from the top is acceptable, it's recommended to use the bottom-up method to reduce the chance of rotten foliage. For specimens that have a bare head, improve growing contains by using this method and increasing light levels slightly. Promote a bushier appearance by taking vine cuttings and placing them halfway down into the soil. Immediately remove yellowed or rotten debris as this will harbour both bacterial and fungal diseases that can both spread across to other sections of the plant.

Too much sunlight will cause a red tinge to the foliage. Although Hylocereus are best grown in locations offering bright light, prolonged periods of intense rays cannot be tolerated. Although the new growth will develop into its original green texture, sunburnt leaves will remain red or yellow for the rest of its functioning life.

Established specimens (2yrs +) may bloom during the summer if its previous dormancy period has been served well in the previous winter. As ukhouseplants been challenged many times on this subject, we've created an acronym to help you through this process - SHORT. The combination of drying soil, cool temperatures and darker nights will contribute to a potential bloom in the following season. Repotting isn't mandatory, but instead might hurt the chances because of transplant shock and stress.

The following steps must be taken in autumn and winter to provide the best possible resting period.

Provide a bright location with a splash of winter sun; darker settings will significantly reduce the chance of flowers.

Reduce watering so that the soil becomes almost dry for a week, for the prevention of root rot and to replicate its dormancy period.

Reduce the temperature by around 5℃ or place in a room which is within 12 - 15℃  (54 - 59℉).  As most houseplants are sensitive to temperature change, we can't empathise how important this is to replicate their dormancy period. If all of the steps are fulfilled, an established specimen could produce beautiful red or pink clusters of flowers in the summer, lasting several weeks.

If a matured Hylocereus hasn’t flowered during the spring or summer, it's most likely due to incorrect care and its environment throughout the year. During the winter, reduce irrigations so that the soil almost dries out, along with reducing the temperature a few degrees. Provide an area that has at least twelve hours of complete darkness, with an absence of artificial light during the night. The buds may start to drop off if it endures persistent droughts or has been relocated in another room. The table above shows a basic timetable in which you can follow to significantly increase the chance of flowers during the spring.

The original name, Hylocereus is an epiphytic or lithophytic genus originating from Central America. It was first described by Britton & Rose in the early 20th century, using the Greek and Latin words hyle, meaning wood, and cereus, referring to its 'waxy' nature. The current name of the species, Selenicereus undatus, also originates from Latin, with the first section translating to 'moon' (Selḗnē). The species epithet, undatus, can be translated to 'wavy edges' that is in reference to the rib-like structure of the stem. 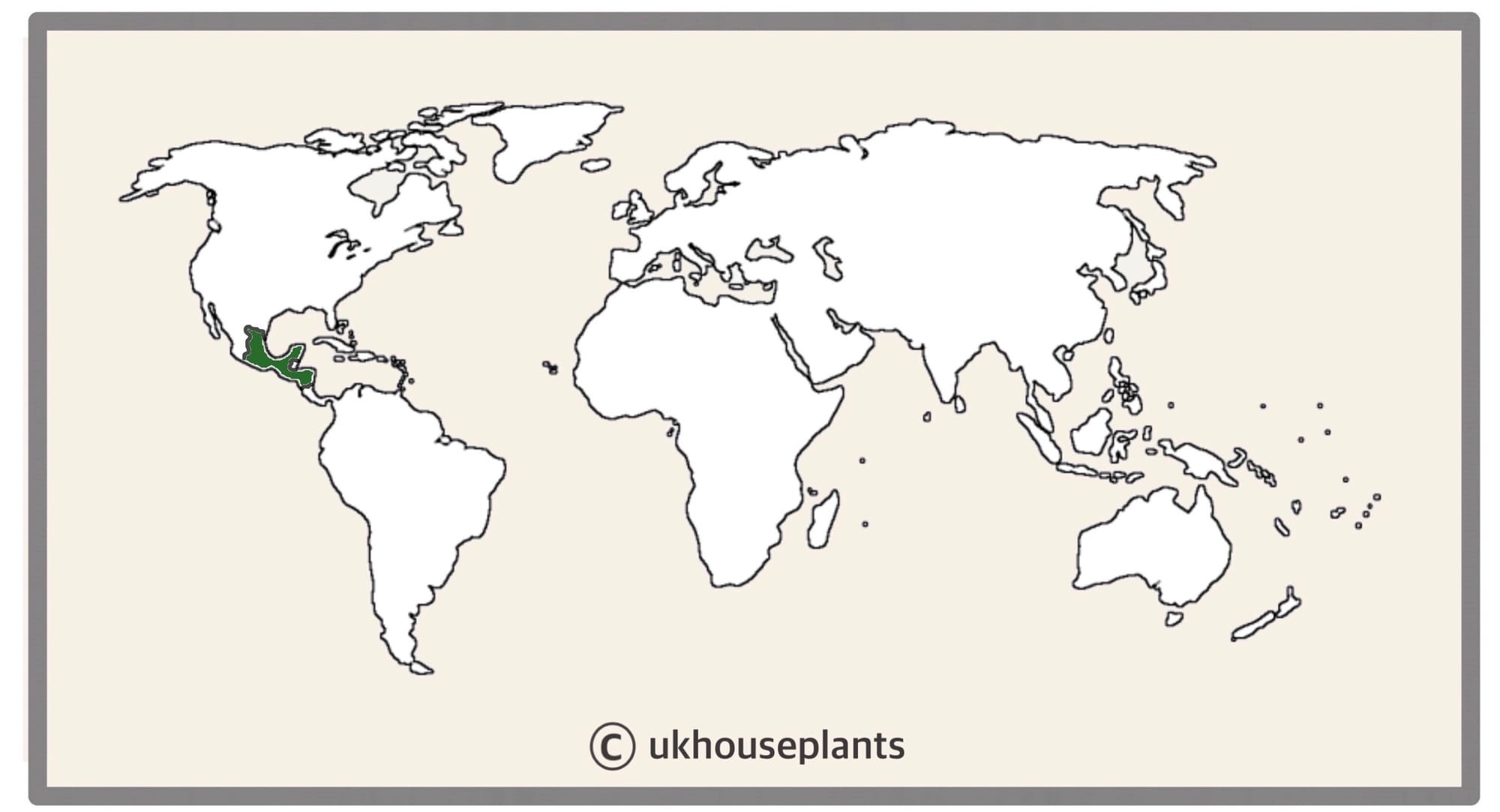 The Distribution of Selenicereus undatus.

10°C - 26°C   (50° - 78°F)
H1b - can be grown outdoors in summer in a sheltered location, but is fine to remain indoors. Placing it outside is very beneficial to help with its overall health. If you decide to bring the plant outdoors, do not allow it to endure more than an hour of direct sunlight a day as this will burn the leaves. Regularly keep an eye out for pests, most notably aphids and vine weevils in the soil.

Up to 3m in height and 1m in width, with maturity taking up to eight years. If you've got images of any tropical cacti that are over twenty years old, be sure to send an image via the 'Contact Me' section of this website!

Via seed or leaf & stem cuttings. To learn about the essentials with sowing seeds, be sure to click on this link - Seed Propagation Tips.

Hylocereus will bud in the summer with rosette-shaped flowers, sporting either red, yellow, pink or white appearances. Each flower will take several weeks to develop, lasting only a few days once opened. Most hybrids or species will produce a sweet-smelling fragrance that'll be most prominent at night. Be sure to take photos of your specimen in bloom, as the flowers will only last a few days!

If pollination is successful, the flowers' ovules will develop into Dragron Fruits. For those who aren't aware, Dragon Fruits, or better known in Asia as Pitahaya (Pitaya), can boast a whole range of health-benefits, including Vitamin B2 & C, Iron and Magnesium. The outer shell and central pulp (flesh) is also BEAUTIFUL and edible - so have a look at the images below! 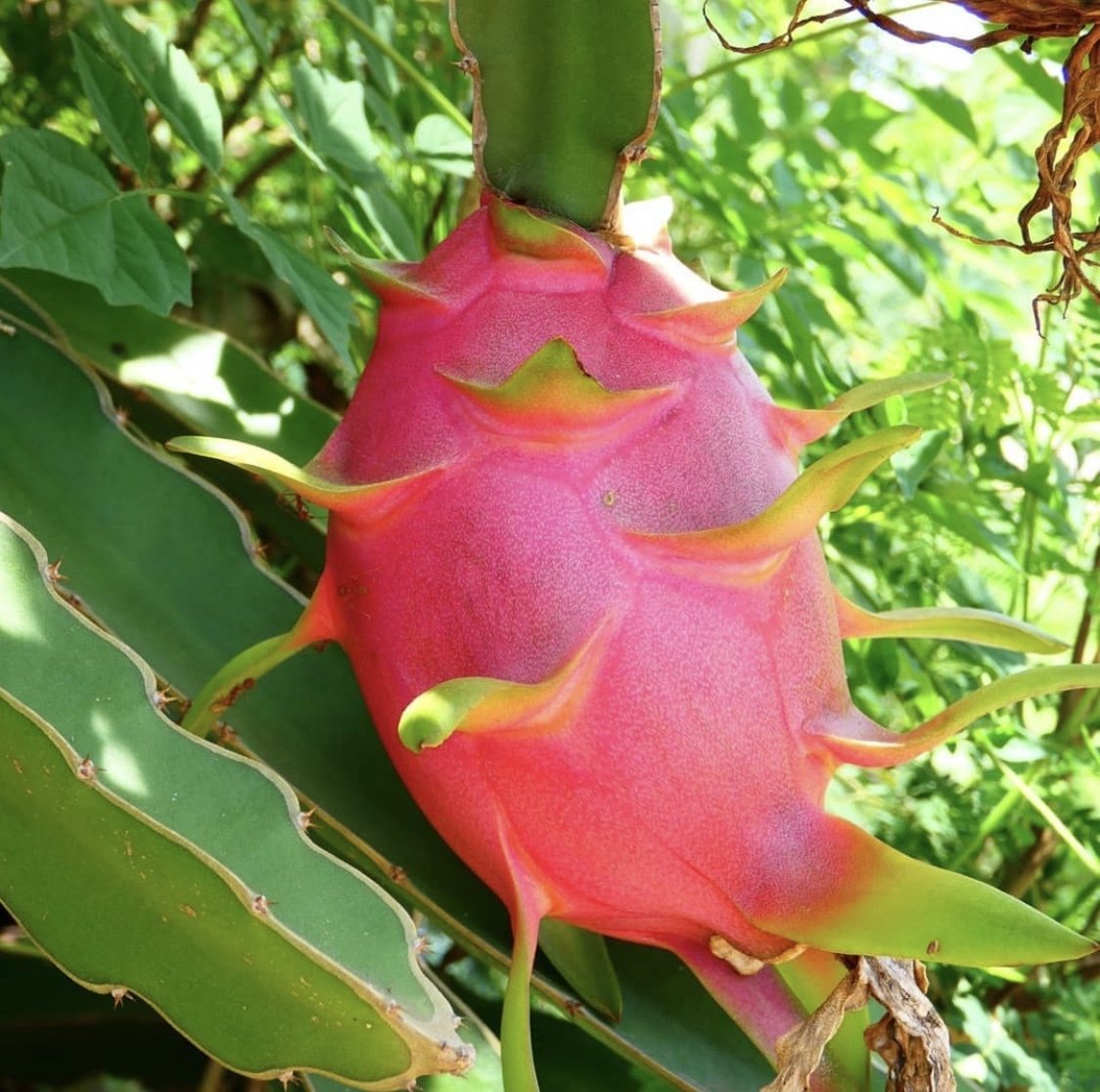 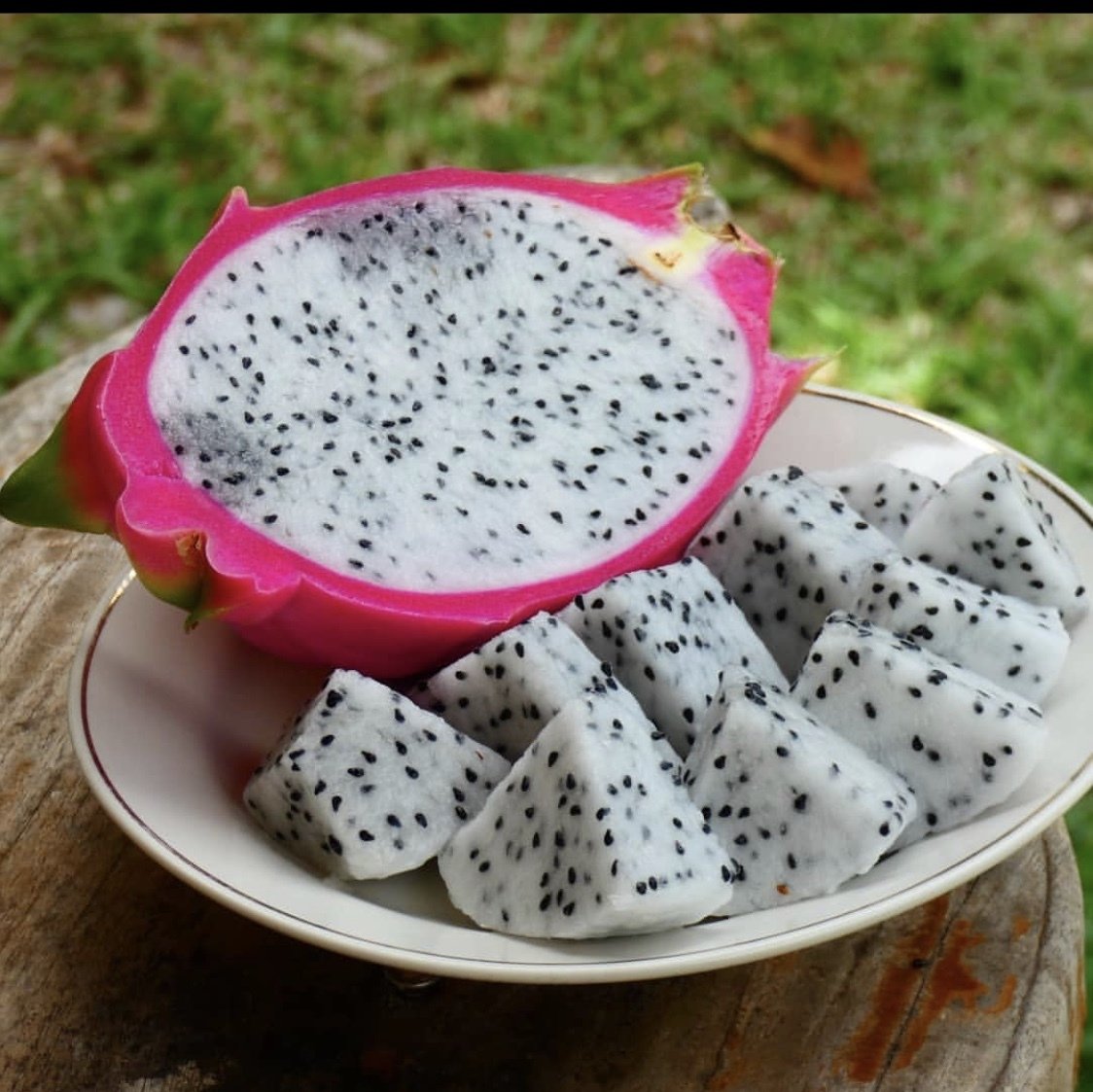 Transplant every two summers into a slightly bigger pot using Cactus & Succulent Compost. This is an excellent time to check the roots' condition, as well as propagation. As all tropical cacti are prone to root rot, have a look around the bottom half of the root ball for any brown or broken down roots. If this is the case, remove the affected areas with clean utensils and ease off with the irritations. Click on this link to learn about how to perform the perfect transplant.

Typical diseases associated with Hylocereus are root or leaf rot, leaf-spot disease, botrytis petal blight & powdery mildew. Keep an eye out for scale, spider mite, mealybugs & vine weevils. For more information on how to address any of these issues, click on this link.  Identifying Common Houseplant Pests & Diseases

Hylocereus are classified as non-poisonous. If large quantities of the plant are eaten, vomiting, nausea and a loss of appetite could occur.