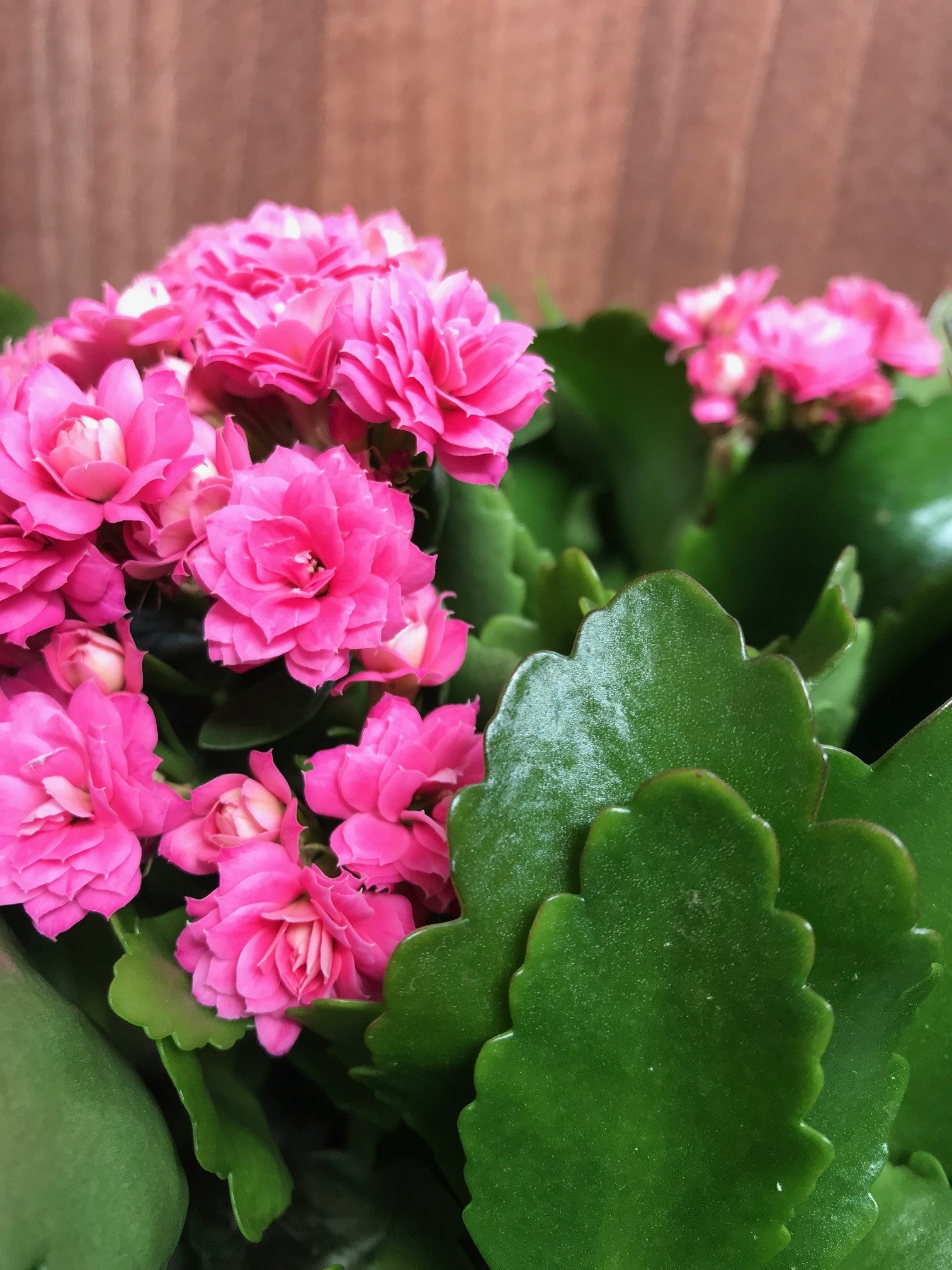 During the flowering period, allow almost all of the soil to dry out in between irrigations, increasing this slightly over the spring and summer. One word to mention is that those situated in darker locations must be watered far less than those located in brighter ones fro the prevention of root rot. Never pour cold water directly into the soil as the root systems' sensitive nature to temperature change, especially whilst the plant is flowering. If you decide to use tap water, allow it to stand for at least 24hrs to allow the fluoride to evaporate; large quantities could build up in the soil, damaging both the roots and the overall health of the plant. Whilst the plant is in bloom, consider using the bottom-up method of irrigation to avoid excess moisture sitting on the flowers. Under-watering symptoms include stunted growth, crispy lower leaves, and flower loss - increase waters slightly and decrease the time spent in direct sun. Over-watering symptoms include yellowing leaves, stem collapse, root rot, and stunted growth. These issues are usually caused by an excess of soil moisture, too little light, saturating both the foliage & flowers, incorrect soil type, or a pool of standing water between the plastic and decorative pots. For more information about this, click on this link to learn about how to address this.

This is not necessary; however, a quick hose down from time to time will wash away both potential pests and dust particles from the leaves. Fungal and bacterial diseases, such as Botrytis petal blight or powdery mildew, will engulf the flowers if excess moisture settles in their cubbyholes. Immediately remove the affected areas and place in a warmer room until all of the moisture has evaporated.

A sunny location is far better than a dark one; settings that can't offer a splash of direct sun should be off the cards at all costs as over-watering is a common with shady corners. Instead, provide a warm, dry location with around an hour of morning/evening sun and avoid persistent under-watering to prolong the flowering process. It's recommended to place a Kalanchoe on a north, west or east facing windowsill, or a few metres away from a south-facing one to avoid sun-scorch.

Fertilise monthly using either houseplant feed or a general plant fertiliser at half of the recommended strength. Flowering plant fertilisers may be used during the blooming process in late spring to promote longer lasting flowers, for example Streptocarpus or Tomato feed. 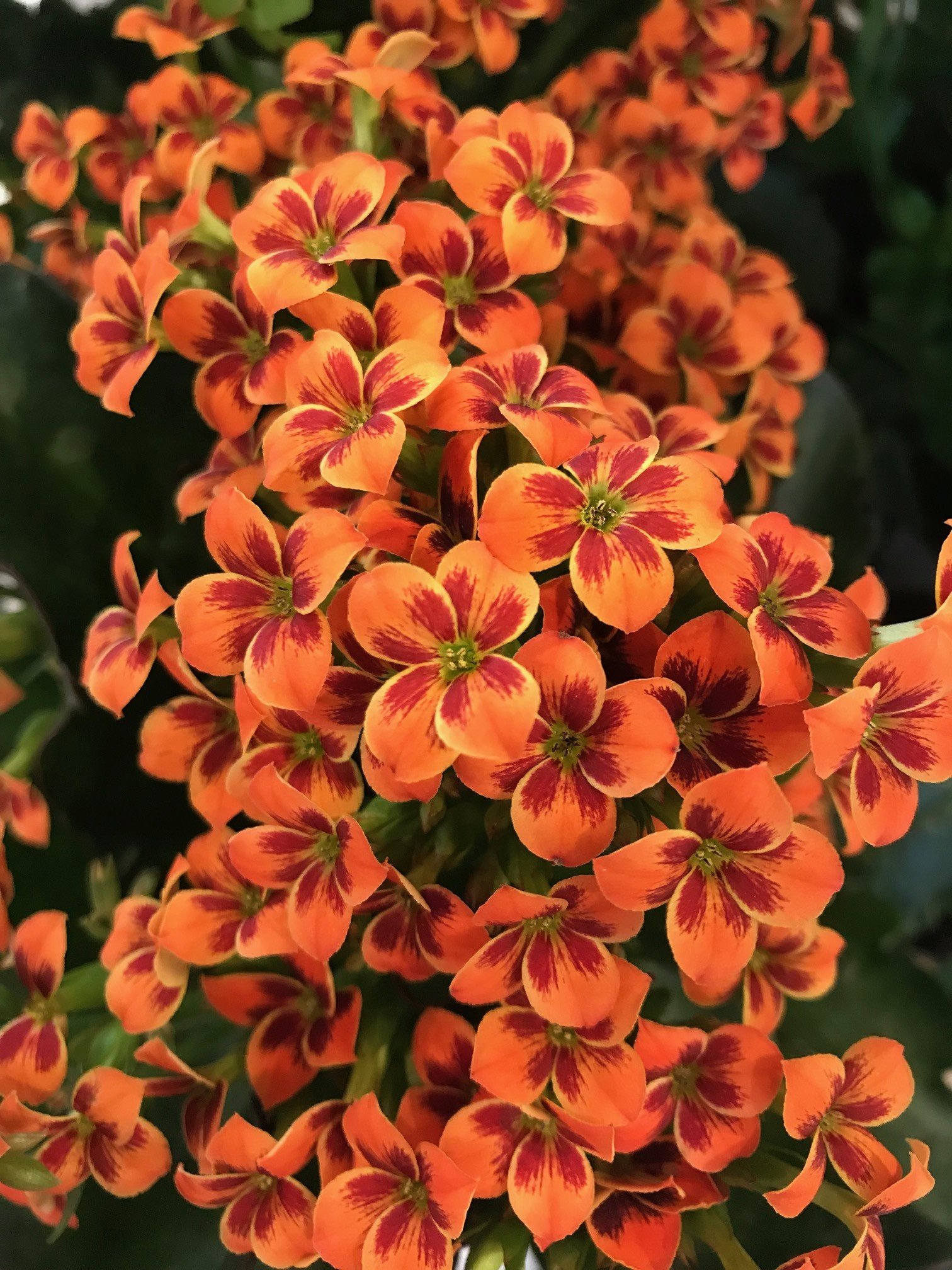 The beautiful inflorescences of the Kalanchoe blossfeldiana.

Dry soil is a big issue when cultivating Kalanchoe. Although they can withstand slight droughts over time, persistent dry spells will considerably weaken the plant, potentially causing death. Stunted growth and flower loss are the typical signs of under-watering; if it doesn't bounce back after severe wilting, it may spell the end of its life. Be sure to avoid direct sunlight and potentially create a schedule if you're a forgetful gardener.

Mealybugs are also a common issue - small, white-coloured critters are most likely to infest the cubbyholes of the flowers, foliage or even the stem. Each female mealybug can lay up to six-hundred eggs in her lifetime, meaning that an infestation can be imminent. The best way to prevent an attack before it becomes a threat is by keeping the windows and doors shut, with regular pest inspections.

Absence of flowers usually is caused by the environment it's located in. During winter, make sure temperatures dip to around 15°C, for its dormancy period. There's no point in having similar temperatures all year round as this will only inhibit the chances of another bloom. Some varieties will flower in the winter months, meaning that this process should be taken in the spring.

While we're on the subject, if you'd like to prolong the flowering period, use a fertiliser high in potassium to promote longer-lasting flowers - Streptocarpus or Tomato feed is an excellent choice. Other tips to extend this period are to avoid temperature fluctuations and droughts, maintain good humidity and situate it in a well-lit room with little direct sunlight. Read on to find out how to get a Kalanchoe to reflower.

Sudden flower or leaf loss could be an array of different cultivation issues; the amount and frequency of irrigations could be to blame, as well as extended droughts, draughts and heat sources being the culprit. Situating it in full sun all-day will quickly cause the foliar to curl and potentially drop off in quick succession; if it's too hot for a chocolate bar, then it's too hot for your plant too! The final reason could be due to a fluctuation of either the surrounding temperature or humidity. Although average air moisture is more than acceptable for a Kalachoe, do not over-mist the foliage as this will only elongate the fluctuations - if you're worried about this issue, try introducing a humidity-tray. While we're on the topic of surrounding air moisture, try not to place the plant within four metres of an operating radiator as this too could cause issues!

Too much sunlight will lead to sun scorch, with typical signs including browning or crispy leaves, dry leaf-edges, sunken leaves or stunted growth. Although too little light will cause over-watering issues, too much sunlight will negatively affect the plant as well. A location that offers over two hours of sunlight a day will bring the optimum growth for the Kalanchoe. If yours has fallen short of this issue, reduce the amount of direct light considerably and always be mindful of environmental shock (when too locations offer too different growing conditions). Remove some of the affected leaves and increase waters slightly. Only hydrate the plant using the bottom-up method.

As mentioned before, powdery mildew and botrytis are major threats among heavy foliage plants due to the compact nature that aids the spread of the diseases. Watering above the foliage will allow excess moisture to sit in the cubbyholes of the stem, enticing harmful bacteria to thrive in the nooks of the plat. Remove the affected areas and improve the growing conditions by situating the plant in a brighter location with the use of the bottom-up method of irrigation whilst the plant is flowering. Typical symptoms of powdery mildew are a thin layer of white powder-like substance forming on the foliage or flowers. In contrast, botrytis petal blight looks largely similar to the mildew, except that it usually accompanied by yellow leaves and small dark spots developing on the flowers.

Be sure to provide a bright location with no direct sunlight.  In order to fully seasonise the plant, avoid the use of artificial lighting during the night.

Reduce irrigations so that the soil stays fully dry for around a week. Keep the plant away from operating radiators and direct sunlight for the east results.

While it's bloom, try to use a 'Flowering Plant' fertiliser once a month, for example Streptocarpus Feed. During the dormancy period, only supplement the roots once or twice to carry through until the following spring, using just a general fertiliser. Shortly before the start of growth, use a fertiliser high in potassium to increase the chance of flower development.

This is the most significant step - reduce the temperature down by around 5℃ compared to the summertime or place in a room which is within 12 - 15℃  (53 - 59℉) during its dormancy. Keep the plant in this environment for around two months, before increasing both the temperature and amount of irrigations. Do not exceed the minimum temperature for Kalanchoe as this will lead to plant death.

Kalanchoe is a flowering genus of over 125 species, mostly originating from tropical locations in Africa and Madagascar. Kalachoe was first described by Michel Adanson in 1763 who named the genus in honour of Czechian botanist, Georg Joseph Kamel. Did you know that the Kalanchoe was one of the first plants to be sent into space in 1971 to re-supply the Soviet Salyut 1 space station.

12°C - 25°C   (54° - 78°F)
H1b - can be grown outdoors in spring and summer in a sheltered location, but is fine to remain indoors. If you decide to bring the plant outdoors, do not allow it to endure more than an hour of direct sunlight a day as this will burn the leaves. Regularly keep an eye out for pests.

Most species grown indoors will reach a height of around 0.8m in height and 0.6m in width. The ultimate height will take between 4 - 12 years to achieve.

Most indoor Kalanchoe will flower between the months of spring or summer, lasting several weeks or even months in some cases. The blooms are arranged in globular clusters, laying just above the foliage line to attract airborne pollinators. Kalanchoe usually sport either white, yellow, red, purple, blue or pink coloured flowers, with cultivars and hybrids being a mixture of all colours. 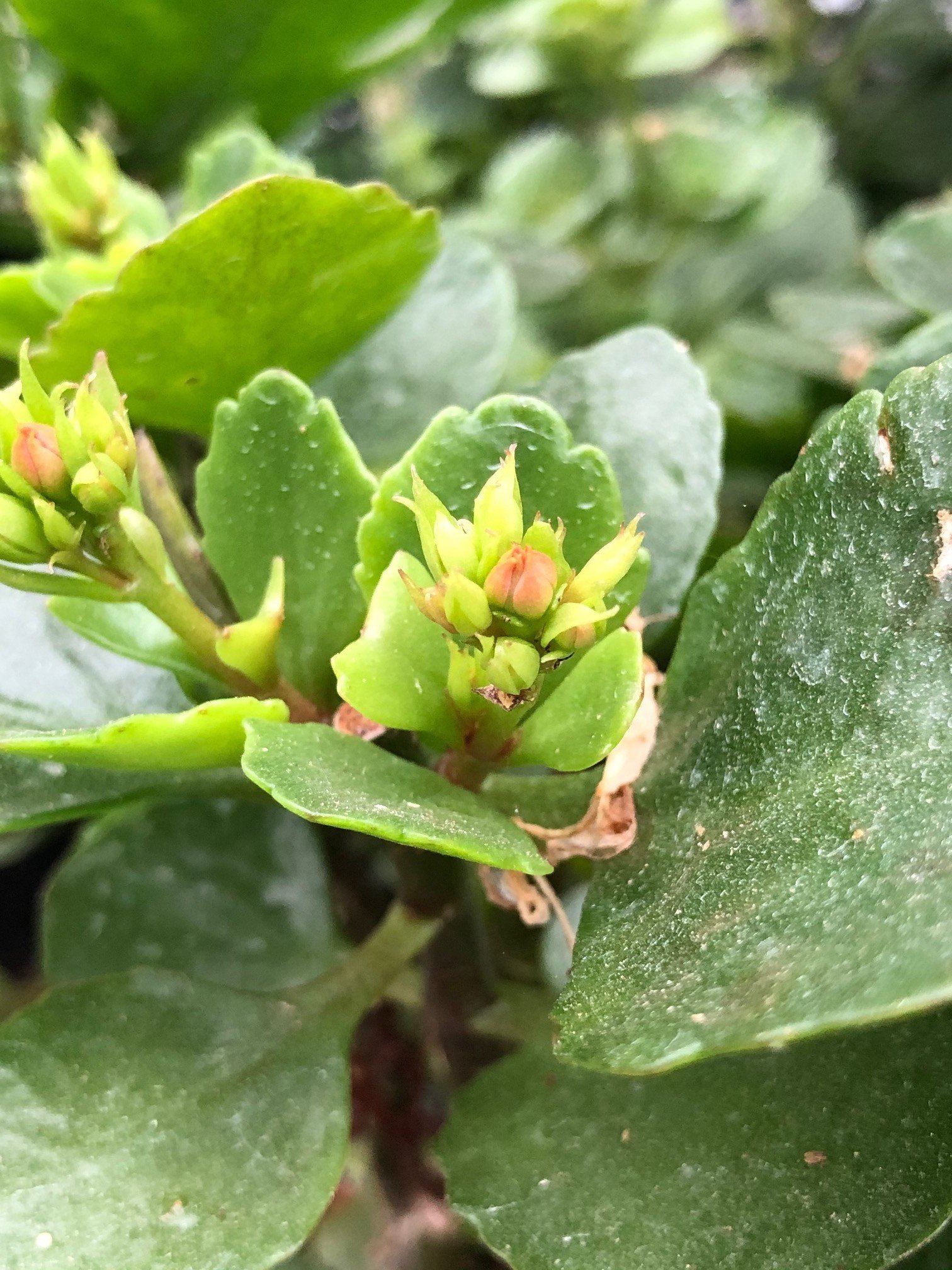 Developing buds that'll open within the next few weeks.

Repot every two or three years using Cactus & Succulent compost. For matured specimens, introduce more grit to promote a stronger root ball as well as the reduction of potential root rot; click on this link for more information on how to perform the perfect transplant. Try not to use Houseplant or a multipurpose compost as the potting medium will be too water-retentive, unless it's mixed with grit or perlite.

Common diseases with Kalanchoe are root or crown rot, powdery mildew, leaf-spot disease, botrytis petal blight and powdery mildew. Keep an eye out for mealybugs, spider mite, thrips, aphids & root mealybugs. For more info on how to address any of these issues, hit this link.  Identifying Common Houseplant Pests & Diseases

Considered poisonous when consumed by pets or humans. If high quantities are eaten, it may result in vomiting, nausea and a loss of appetite.

Predominantly sold at supermarkets during the festive periods of Christmas or Easter, and throughout spring and summer at many garden centres.