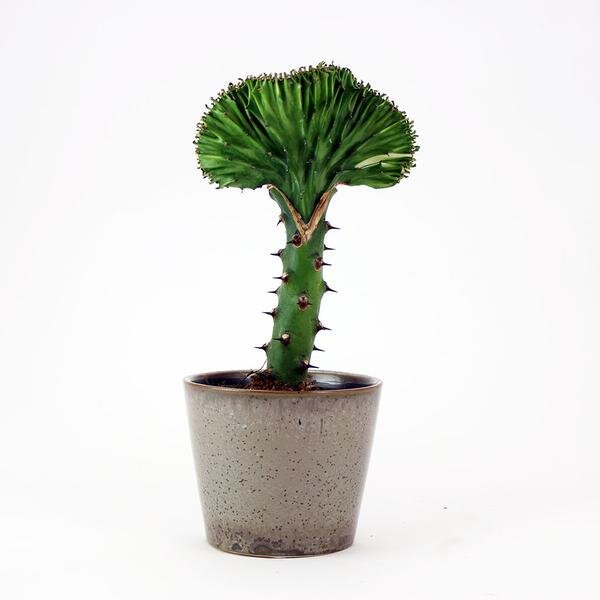 This product is actually grafted, with the coloured top being a crested Opuntia and the rootstock (or basal plant) being a Euphorbia lactea or Selenicereus undatus.

As mentioned above, Coral Cacti are best located in a bright location that boasts high temperatures in the spring and summer. A few hours of off-peak sunlight will be highly beneficial for the plant, as it’ll significantly reduce the risk of over-watering and root rot. Due to the species' intolerance to low light, avoid placing one in areas where a newspaper can’t be read without the use of artificial light.

If you have recently bought your Coral Cacti, it can be trained to tolerate harsher levels of sunlight than most houseplants, by gently increasing the number of hours in the sun over the oncoming month. Each week, increase the amount of light by an hour, starting with just an hour of morning sunlight to gain its momentum. The plant will slowly decease the production of chlorophyll, which in turn will reduce the risk of bleaching and sun-scorch. Remember to keep the specimen well hydrated during this period, and always abort the experiment if it shows signs of sun-scorch. The maximum amount of sunlight for this plant is around four hours a day.

The ukhouseplants saying of 'drenches between droughts' strongly applies to Coral Cacti. Not only will continuous soil moisture ruin their root systems, but it'll also increase the risk of 'basal rot' which essentially will destroy the plant from its centre. Allow all of the soil to thoroughly dry out in between waters in the growing period, reducing this even further in the autumn and winter. Under-watering symptoms include shrivelled or leggy leaves, yellowing, little to no growth and dry, crispy patches forming on the leaf edges. These issues are usually caused by too much light/heat or forgetfulness. Remember, the brighter the location, the more watering you'll need to do. Over-watering symptoms include a weakened or rotten stem, no new growth, yellowing lower leaves and eventual plant death. The differences between under and over-watering can be very similar, with a rotten root ball being the obvious difference.

Fertilise every two months during the growing period and every three months in the autumn & winter during its dormancy period. Although a 'Houseplant' fertiliser will still do the job, we'd recommend using a specific 'Cactus' labelled feed as it'll support the vital thirteen nutrients that this species will need to grow.

If the coloured top begins to brown and rot, it's most likely to do with too saturated soil or waterlogged conditions. Take the plant out of the pot and inspect the roots as they'll tell a lot about the plant's wellbeing. If the roots sport a yellow tinge, you're good to go, but if they're brown and mushy, action must be taken immediately. If the base of the plant (Euphorbia lactea) begins to rot as well, discard the whole specimen. Alternatively, if only the base begins to rot, remove the scion (coloured top) and place it a quarter into a fresh batch of 'Cactus' labelled compost. Keep the soil mostly saturated for the first month, before following the phrase 'drenches between droughts' again. Discard the base as it'll only spread across the whole plant. In some cases, the scion will lose its colour. If the whole specimen doesn't show signs of rot and you know for sure that it isn't over-watered, don't worry too much.

Root or basal rot is a common issue with specimens sat in too moist or waterlogged soil for long periods. Symptoms include rapidly yellowing leaves, stunted growth and a rotten brown base. Take the plant out of the pot and inspect health below the soil line. If the roots sport a yellow tinge, you're good to go, but if they're brown and mushy, action must be taken immediately. More information about addressing root rot can be found on this link.

Curled leaves and dried brown edges are the result of too little water and over-exposure to the sun. Although Coral Cacti can naturally do well in sun-filled locations, those that haven't acclimatised to the harsh rays will show signs of sun-scorch and environmental shock. Prolonged exposure will significantly speed the process of dehydration, so consider transplantation into a bigger pot in the spring to wrap the roots around moister soil.

The plant's colour change into a pink, purple or red tone is nothing to worry about and may just be a product of slight overexposure to the sun. Move the plant slightly to the right of the windowsill (or left if you're in the Southern Hemisphere), to downplay the risk of sun-scorch and continued colour change.

Directly pinpointing yellow leaves is rather hard due to the many different issues that could be at fault. Problems include watering-related abuse, too much or too little light, and fertilisation issues. If you'd like to speak to ukhouseplants in regards to this issue, don't be afraid to book a 1-to-1 call to help guide you through the step-by-step process!

If the rootball (i.e. the soil) has constricted and become smaller, the plant may become unbalanced and wobbly. This is the direct product of under-watering, whereby the roots have literally squeezed the pot for all remnants of water. Fill the gaps with a fresh batch of 'Cactus & Succulent' compost and increase your watering slightly.

Never allow temperatures to dip below 10ºC  (50ºF)  as irreversible damage may occur in the likes of blackened foliage and weakened growth. If this happens, remove the severely affected areas and immediately improve growing conditions - never cut through softened yellow growth, and only around brown, crispy squares. As rehabilitation can take several months because of its slow-growing nature, be sure to provide a stable location with better growing conditions to speed this process.

As this product is two separate species grafted together, it's origins are slightly different. Unfortunately, there isn't too much information on when it was first commercialised, so this section will only be mentioning the two species' taxonomic history.

Euphorbia lactea was formally described by Adrian Hardy Haworth in 1812, during a trip to Southern Asia. The species has a natural distribution across Sri Lanka and acts as the basal plant of a Coral Cactus.

The genus, Opuntia, was first penned by Carl Linnaeus in 1754, honouring the Ancient Greek city of Opus. Its distribution is vast, covering most temperate and arid locations of the Americas. 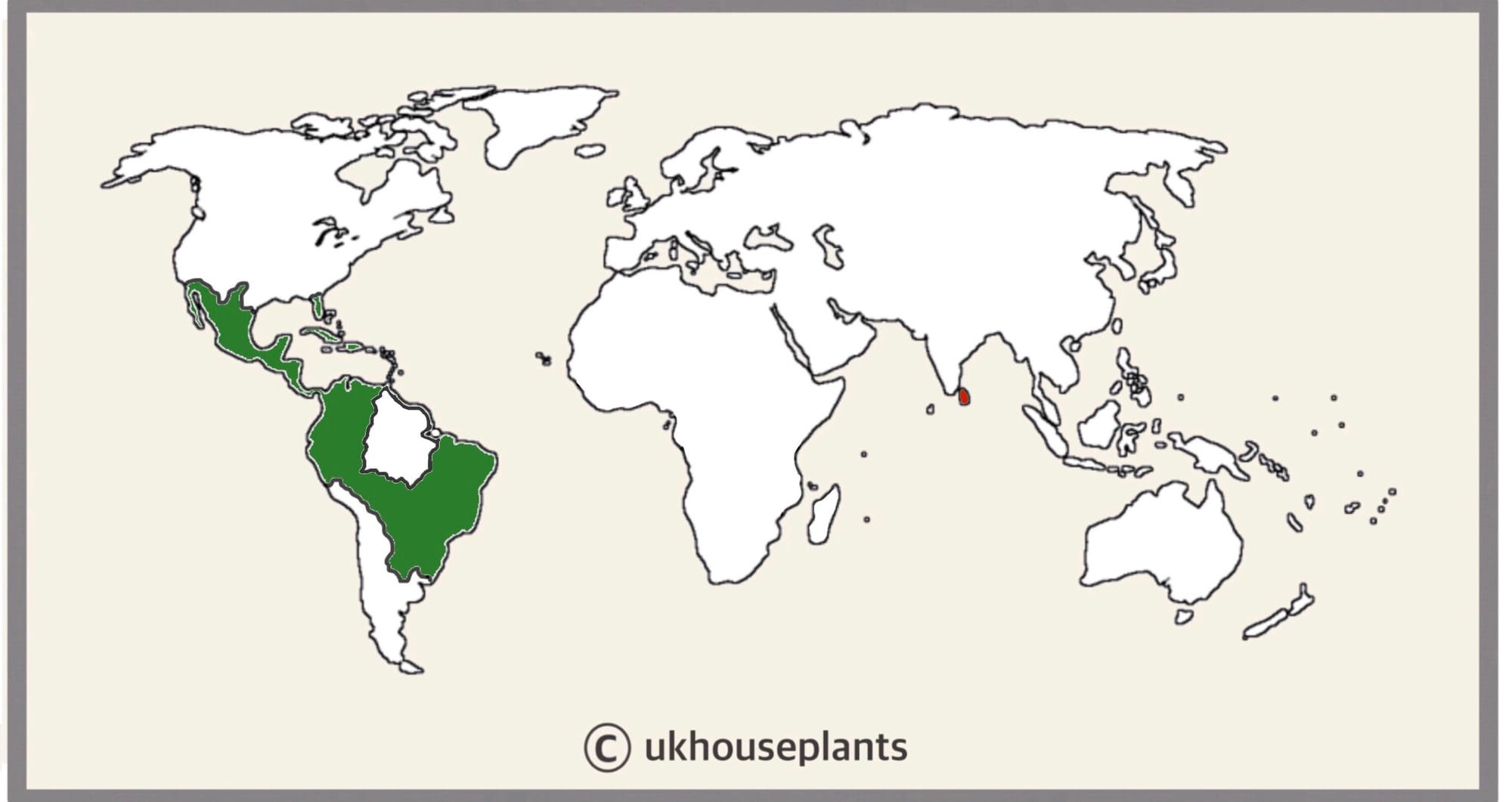 The Distribution of Euphorbia lactea (basal plant) in Red  &  Opuntia in Green.

12° - 32℃   (54° - 90℉)
H1b  (Hardiness Zone 12)  - Can be grown outdoors during the spring and summer in a sheltered location whilst nighttime temperatures are above 12℃  (54℉),  but is fine to remain indoors, too. If you decide to bring this plant outdoors, don't allow it to endure more than an hour of direct sunlight a day as it may result in sun-scorch. Regularly keep an eye out for pests, especially when re-introducing it back indoors.

The individual rates of both species' growth are much different when kept separately in their own pots, but as a 'duo', their rates will be almost nil. Generally, the rootstock (Euphorbia lactea) may produce lateral branches over time, which can be propagated via the link of the 'Propagation' section.

Only the rootstock (Euphorbia lactea) can be propagated successfully if it produces a lateral branch (Leaf/Stem Cuttings).

This product won't flower in its lifetime.

Repot every three to four years in spring using a 'Cactus & Succulent' labelled potting mix and the next sized pot with adequate drainage. Coral Cacti are far better potbound for several years due to the heightened risk of root rot and repotting-issues (like transplant shock) - so only repot if you feel it's wholly necessary.

Keep an eye out for mealybugs, scale, thrips, whitefly & root mealybugs that'll locate themselves in the cubbyholes and undersides of the leaves, with the exception of the latter in soil. Common diseases associated with Coral Cacti are root rot, leaf-spot disease, botrytis, rust, powdery mildew & southern blight - click here to learn more about these issues.

This plant is classified as poisonous; if parts of the plants are eaten, vomiting, nausea and a loss of appetite could occur. Consumption of large quantities must be dealt with quickly; acquire medical assistance for further information. The sap can also cause dermatitis and skin allergy to sensitive individuals, so be sure to wear gloves when handling.