Anthuriums are epiphytic, meaning that they grow on trees and therefore aren't tolerable to water-logging. During the spring and summer months, allow a third of the soil to dry out in between irrigations, while reducing this further in winter. If it's in bloom, avoid using cold water due to their sensitivity to temperature change. Under-watering symptoms include stunted growth, flower loss, wilting, crispy brown patches developing on its leaves, and gradual decline. These issues are usually down to too much sunlight or heat, a much needed repot or forgetfulness. Over-watering symptoms include lower yellowing leaves, stunted growth, wilting or brown spots on its leaves. These issues are usually familiar with either too little light or heat or too soggy soil. If you feel root rot or leaf spot disease is the case, be sure to hit the link below for more info.

A weekly mist is needed to prevent the browning of leaf tips, especially during the cooler months while the heaters are operating. Poor air circulation and high humidity will cause white powdery mildew to form on the leaves or cubbyholes of the stem, which can be eradicated by a wipe down of warm soapy water. Inconsistent levels of surrounding air moisture will upset the Anthurium, resulting in flower loss and stunted growth; if you're a forgetful gardener, introduce a humidity tray to ensure its stability.

Anthurium can host a whole range of indirect light levels, and like Pothos, ZZ Plants and Palms, are an excellent choice for dark corners of the home. Avoid strong direct sunlight for extended periods as this will prove problematic in the coming months; symptoms include pale-yellow leaves, stunted growth and brown patches. Relocate the plant to a slightly darker location and remove severely affected leaves; although yellowing leaves will not return back to its former glory, new growth will be considerably greener if kept in good cultivation.

Twice a month in the growing period, and monthly during winter using either houseplant or a general plant fertiliser at half the recommended strength. Avoid directly applying 'ready-to-pour' fertilisers into the soil without a pre-water due to the roots' sensitive nature to harsh chemicals. 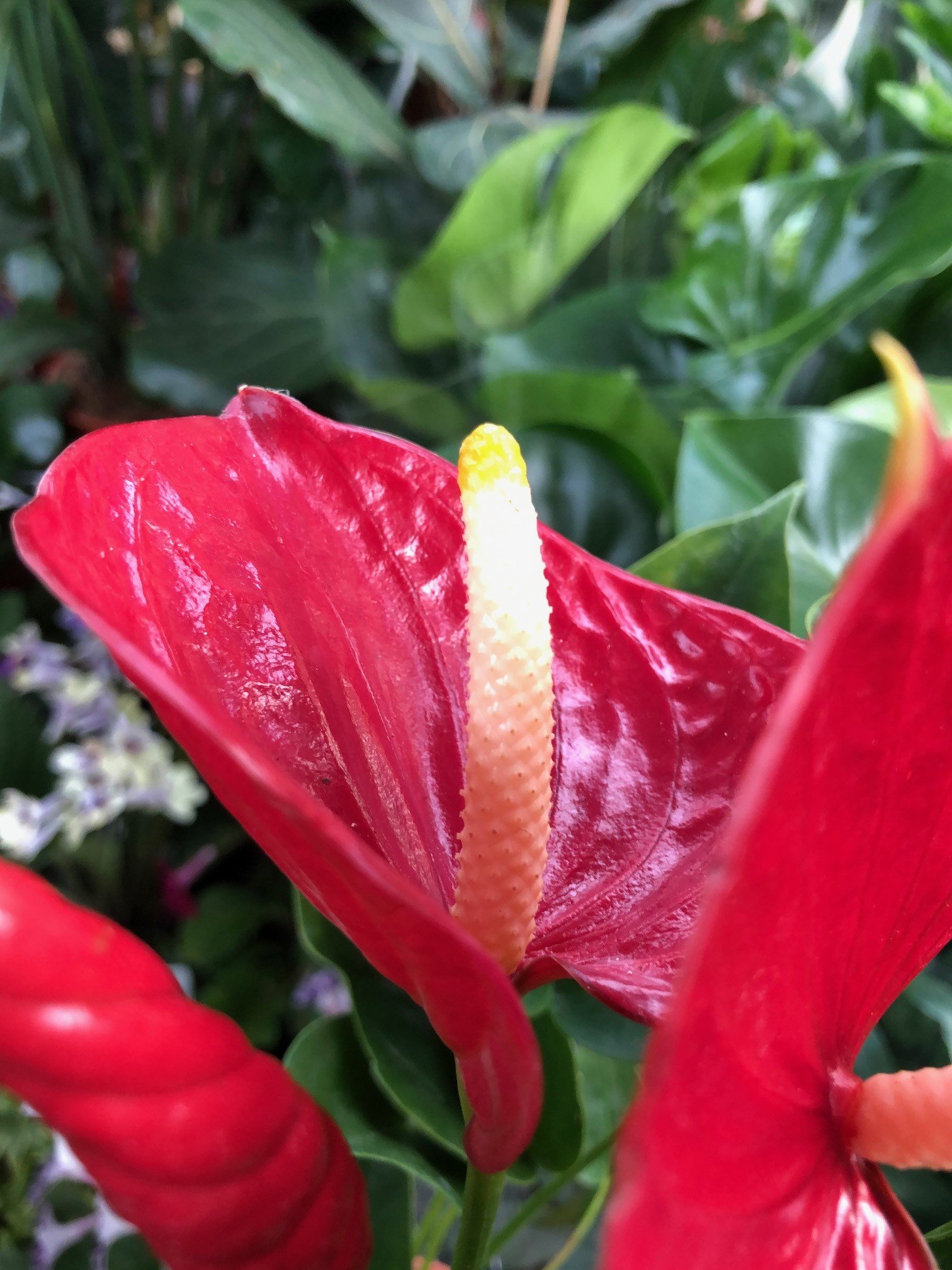 Root rot is a common issue. Typical symptoms include rapidly yellowing leaves, stunted growth and stem collapse. Take the plant out of the pot and inspect its root systems. If if they're brown and mushy, this must be acted on promptly. More information about addressing root rot can be found on this link.

Yellowing lower leaves is a clear sign of over-watering, a typical product of too little light. Although they can do well in low light, irrigations must be reduced to counteract the chance of root rot. The soil-bourne disease is the breakdown of the root systems that will inhibit the plant's ability to soak up moisture and vital nutrients for growth, resulting in wilting and yellowing leaves. If you'd like to learn more about how to address root rot, please click on this link.

Curling leaves with crispy brown edges symbolise too little water and possibly too much sunlight. Forgetfulness, too much light or a much needed repot are the usual causes. As Anthurium tend to have extensive root systems, a transplant should be considered; click on this link for more info.

Too low humidity can cause browning leaf tips with yellow halos. Although this won't kill the plant, an increase of humidity will prevent new growth adopting these symptoms. Either mist weekly while the heaters are on, or create your humidity tray.

Spider mite are minute chlorophyll sucking pests that can reek havoc if left to manifest. Areas of attack are under the leaf, in circles and next to the midrib (central column of leaf). For more information on how to identify and address this issue, click here.

A lack of flowers could be due to an array of different issues that include irregular watering habits, too little light and not enough fertilisation. Cold water must not be used during the flowering period in summer as sudden temperature changes can shock the plant, preventing further blooms. Although persistent droughts will also cause issues down the line, it's over-watering that must be regular thought about. Improper growing conditions could also cause problems with Anthurium; avoid locations that are both too dark and too bright, and always provide a good level of humidity. Finely mist the foliage twice a week while keeping the flowers dry to avoid an attack from botrytis petal blight or powdery mildew.

Green flowers that aren't white is a clear sign of too much sunlight. Due to the heightened levels of photosynthesis, the leaves will be doing overtime on the production of converting sunlight into energy, thus leading to the abnormality. Although this may seem worrying at first, this is a natural process that will not hurt the plant, as long as browning leaves don't occur. The final heads-up to mention is that the prolonged direct light may inhibit the number of future flowers during this specific blooming cycle.

Transplant shock is a big issue when it comes to repotting; give the plant a good soak 24hrs before the action and never tinker with the roots, unless it has been affected by root rot. Typical signs of transplant shock are largely similar to under-watering - wilting, yellowing leaves and stunted growth. For more information about addressing this issue, please click on this link and scroll down to the 'Transplant Shock' section.

Browning leaf halos are a clear sign of over-fertilisation. Although a fortnightly feed during the warmer months is very beneficial, avoid going over-board with the supplementation as Anthurium roots can be highly sensitive to sharp chemicals. Give the soil a thorough soaking to wash away the excess nutrients.

A lack of flowers is caused by a insufficient dormancy period, served in the winter months. Locations that offer near-similar temperatures all year round won't allow the plant to go dormant, resulting in poor spring growth. To achieve, situate in a location that dips to around 15°C  (59°F) with fewer waters. Allow the majority of the compost to dry out and provide a humidity tray while the radiators are operating.

Mature specimens will eventually bloom during spring to summer if its previous dormancy period has been served well in winter. As ukhouseplants has been challenged many times on this subject, we've created an acronym to help you through this process; SHORT. The combination of persistent droughts, cooler temperatures and long nights during winter will all contribute to the flowering process that'll take place in the following summer. Repotting isn't mandatory, and instead might hurt the chances because of transplant shock. The following steps must only be taken from late autumn to early spring to provide the best chances of flowers.

Be sure to provide a bright location with an hour or two of winter sunlight. In order for the Anthurium to fully become seasonised, avoid the use of artificial lighting during the winter months.

Reduce waters so that the soil becomes almost dry to reduce the chance of root rot and replicate its dormancy period. Never use cold water as this could anger and damage the roots over time.

While it's bloom, try to use a 'Flowering Plant' fertiliser, for example Streptocarpus Feed. During the dormancy period, only supplement once or twice to carry through until the following spring.

This is the most significant step - reduce the temperature down by around 5℃ compared to the summertime or place in a room which is within 14 - 17℃  (57 - 62℉). Most houseplants are quite sensitive to ambient change, so we can't empathise how vital this step is! Do not exceed the minimum temperature for tender Anthuriums as this will lead to plant death. 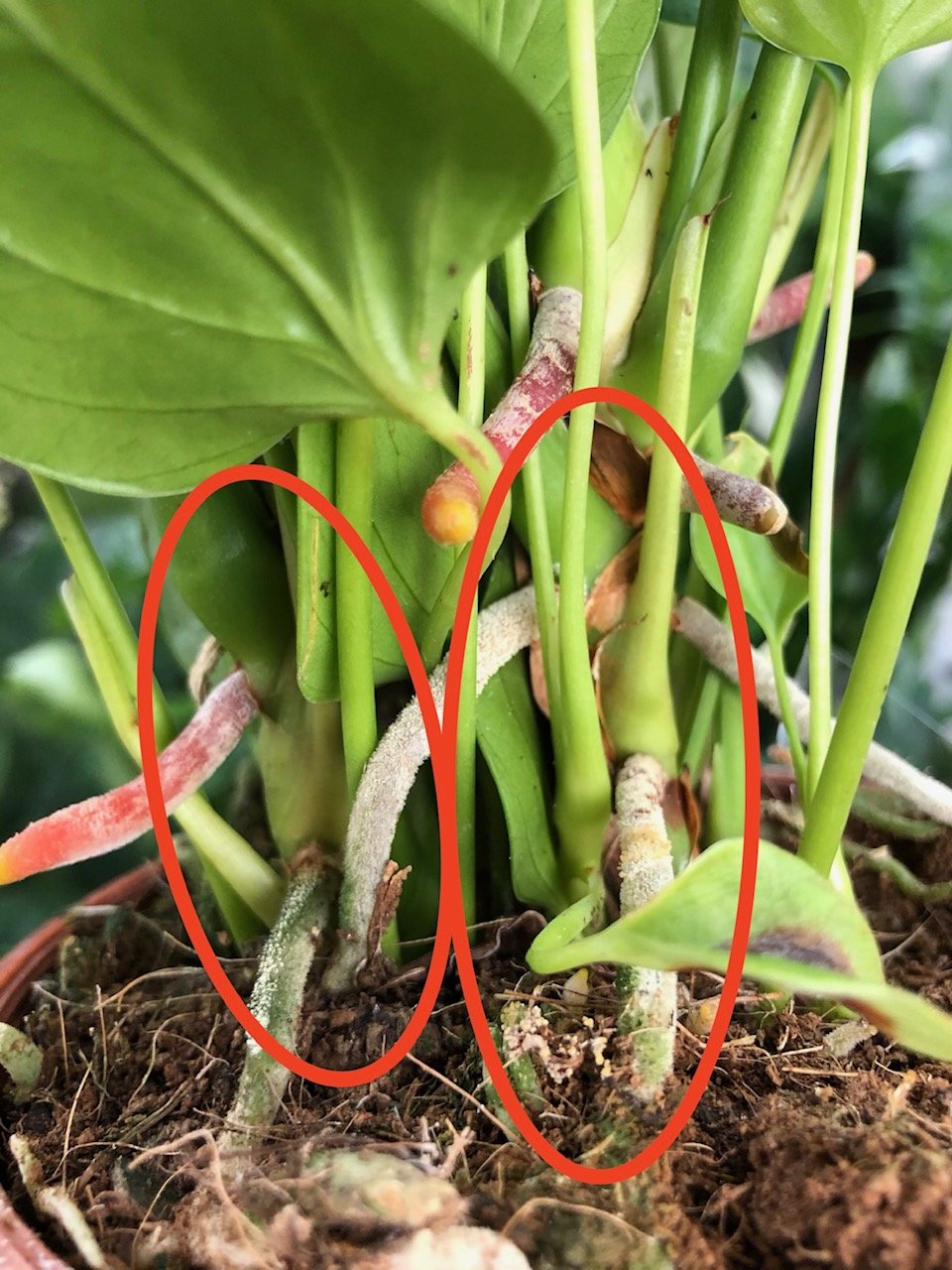 Many Anthuriums can be split during the repotting period in Spring. Here highlighted, is the ideal candidate due to the maturity and presence of roots on each offset.

Anthurium consists of over one thousand species and hybrids, originating from sub-tropical regions of the Americas. The genus was first formally described back in 1829, by Heinrich Wilhelm Schott during a visit to South America. The name derives from the Greek words for flower and tails, (anthos, oura) referring to the oddly shaped flowers that get put out during early summer.

10°C - 29°C   (50°F - 85°F)
H1b - can be grown outdoors in summer in a sheltered location, but is fine to remain indoors. If you decide to bring this houseplant outdoors, do not allow it to endure more than an hour of direct sunlight a day as this will burn the leaves. Regularly keep an eye out for pests.

Via seed or division. To learn about the essentials with sowing seeds, be sure to click on this link - Seed Propagation Tips.

For the latter method, it's best to divide in spring or summer and once the offshoots are at least half of the size of the mother plant (20cm+ frond length). Take the plant out of its pot and place your hand in between the two; soil may have to be removed to get a better grip. While placing your hand closely to the nodal junction, gently push the pup downwards, while supporting the mother plant - you should hear a snap. Cautiously separate both the mother plant and pup's roots systems, keeping great empathise in keeping the roots intact and damage-free. Place the new plantlet in a well-draining potting mix, much similar to the original soil, and maintain the same care routines. Houseplant Compost with some Orchid Bark is acceptable, or you can make your own using multipurpose compost with grit or perlite. Make sure not to use a pot that is too big as a ratio of roots-soil that leans towards the latter will cause root rot and eventually plant death.

Blooms can develop at anytime of year, lasting up to three months. During this time, be sure to use tepid water as the root systems of an Anthurium can be very sensitive to cold temperatures. The cut flowers can last up to five weeks in a flower arrangement, giving both colour and prestige.

Repot every two years using a mix of Orchid bark and Houseplant Compost. Only repot if necessary; biannually and once all of the flowers die off; transplant shock will cause flower loss and even death. Click on this link to learn about how to replicate the perfect transplant.

Common issues with Anthuriums are root rot, botrytis (caused by excess moisture on leaves or flowers), leaf-spot disease & powdery mildew. Keep an eye out for aphids, spider mite, mealybugs, scale & thrips. Click on this link to learn about addressing any of these issues.