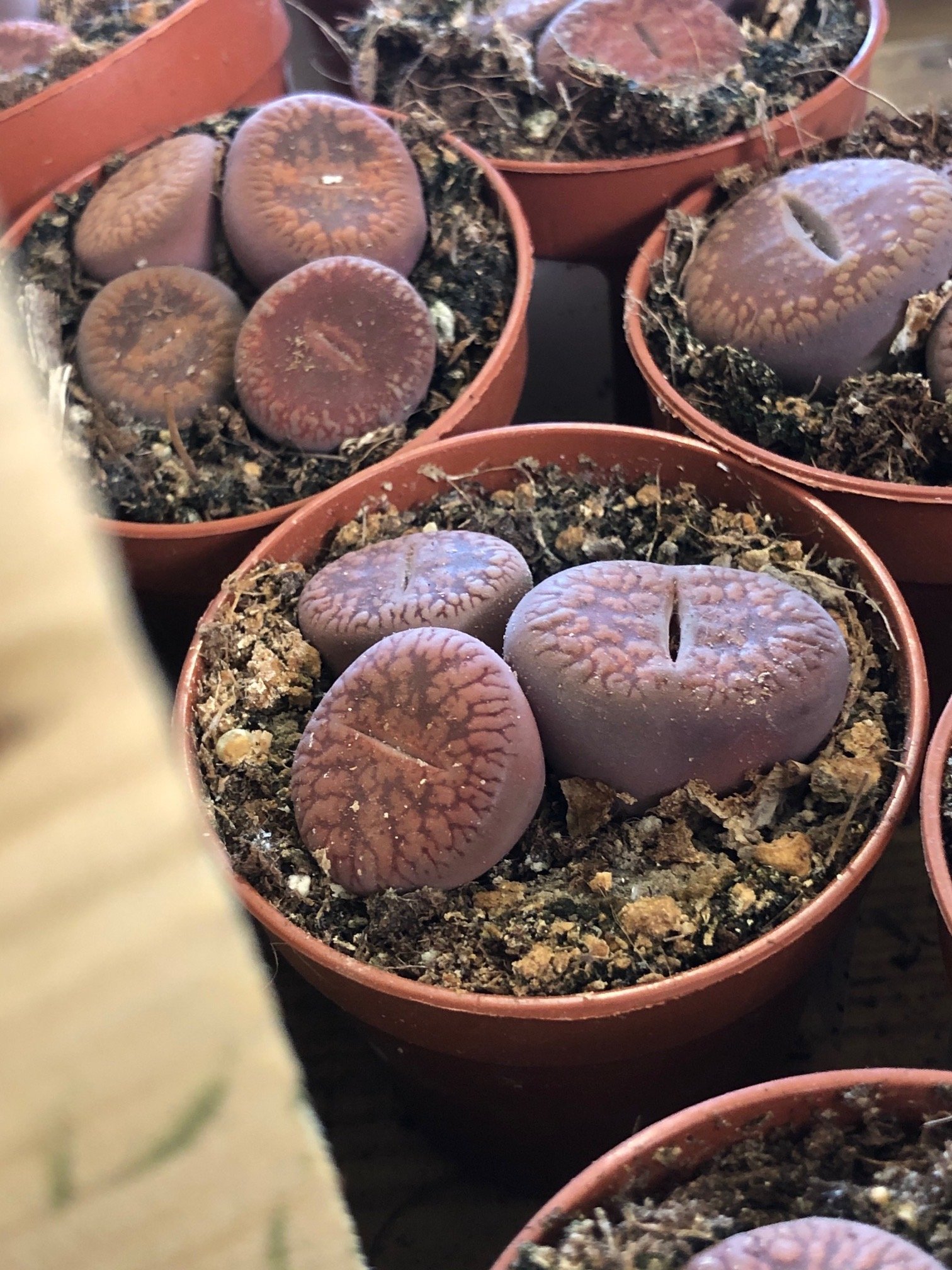 When situated in the correct environment, Living Stones are one of the easiest houseplants to have in a collection. It's essential to place yours in a windowsill that receives around two hours of morning or evening sunlight per day, increasing this by an hour in the autumn and winter.

The warmth and light from the sun will considerably increase the chance of winter blooms, as areas with near-constant temperatures will stunt the specimen's development in the late summer. Due to the species' intolerance to low light, avoid placing one in areas where a newspaper can't be read without the use of artificial light.

Living Stones will require the ukhouseplants saying of 'drenches between droughts'. Not only will continuous soil moisture ruin their root systems, but it'll also increase the risk of a rotten base which will destroy the plant inside-out. Allow all of the soil to thoroughly dry out in between waters in the growing period, reducing this further in the autumn and winter. A further tip to mention is not to water whilst the new pair of leaves are growing, and instead, should be kept wholly dry until the previous two leaves become crispy.

Under-watering symptoms include a shrivelled stem, little to no growth and dry & crispy older leaves. These issues are usually caused by too much light/heat or forgetfulness - remember, the brighter the location, the more watering you'll need to do. Over-watering symptoms include a weakened or rotten base, little growth and eventual plant death. The differences between under and over-watering can be very similar, with a rotten root ball or stem being the obvious difference. If your specimen has developed signs of rot, be sure to scroll down to 'Common Issues' for more information regarding this! 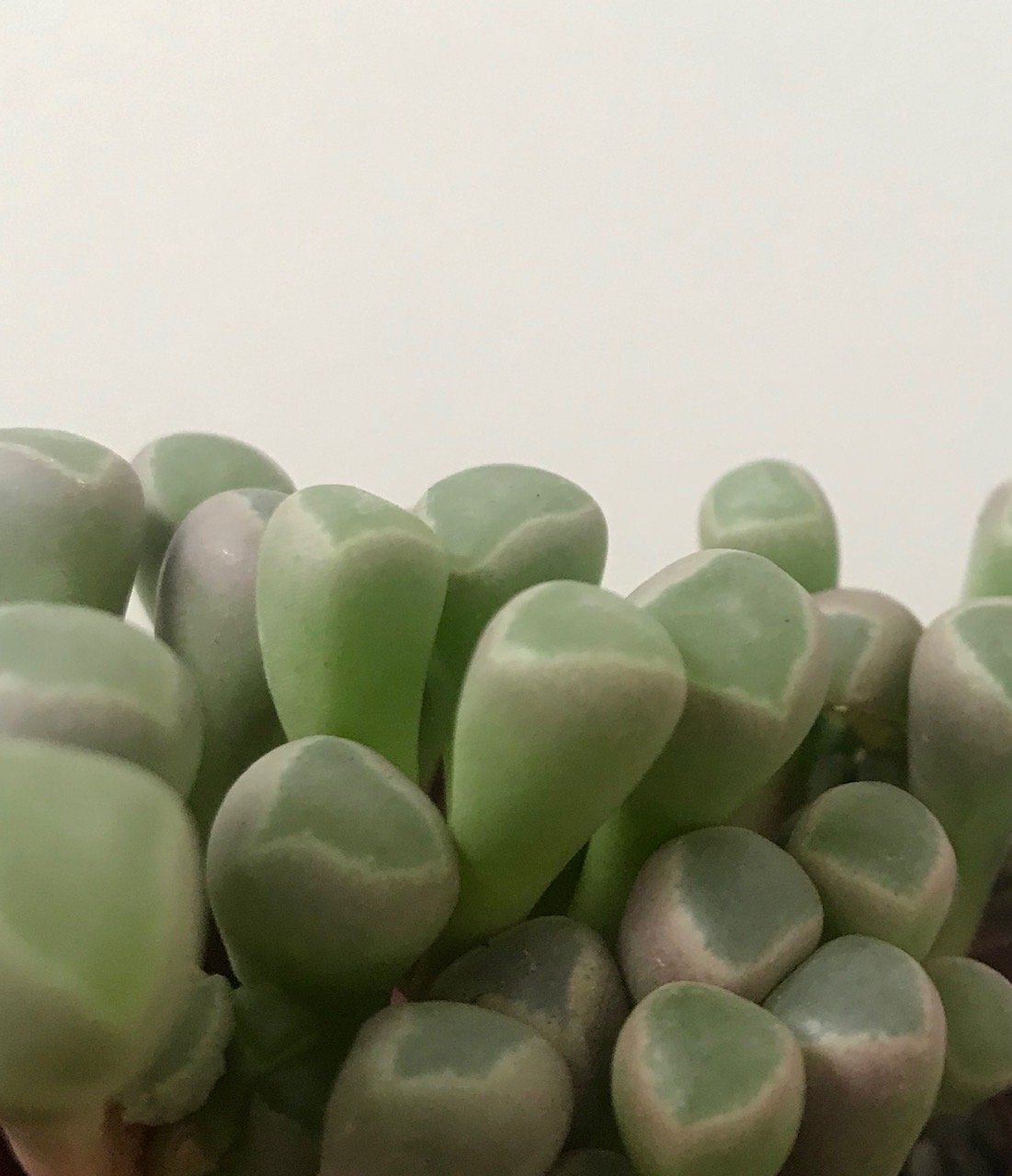 The term, Living Stones, doesn't just cover Lithops, but it also includes two other closely related genera - Frithia & Conophytum. Pictured above is a Frithia pulchra which produces new lateral 'bodies' of foliage from the base, as suppose to through the 'fissure' (or centre) of the two leaves of Lithops.

Curled or crispy older leaves are the result of too little water and over-exposure to the sun. Although Living Stones can naturally do well in sun-filled locations, those that haven't acclimatised to the harsh rays will show signs of sun-scorch and environmental shock. Prolonged exposure will significantly speed the process of dehydration, so consider transplantation into a bigger pot in the spring to wrap the roots around moister soil. Alternatively, these plants are an excellent choice for a desert-themed terrarium or display!

Root rot or basal rot are common issues with specimens sat in too moist or waterlogged soil for long periods; symptoms include wobbly growth, stunted growth and a rotten base. Take the plant out of the pot and inspect health below the soil line. If the roots sport a yellow tinge, you're good to go, but if they're brown and mushy, action must be taken immediately. More information about addressing root rot can be found on this link.

Never allow temperatures to dip below 5ºC  (40ºF)  as irreversible damage may occur in the likes of stunted or weakened growth. If this happens, remove the severely affected areas and immediately improve growing conditions - never cut through softened yellow growth, and only around brown, crispy squares. As rehabilitation can take several months because of its slow-growing nature, be sure to provide a stable location with better growing conditions to speed this process.

A lack of flowers is caused by either immaturity or an insufficient dormancy period, where the temperatures are kept too consistent over the year. Reduce the warmth by a couple of degrees over the late summer to early spring, along with fewer irrigations to ensure a well-spent rest. As the cooler temperature arrives, mature specimens will push a flower bud through the fissure (centre) or via the base of the plant's foliage, depending on the species. Blooms are more likely to occur in bright, sun-filled locations and with those that are at least three years old. 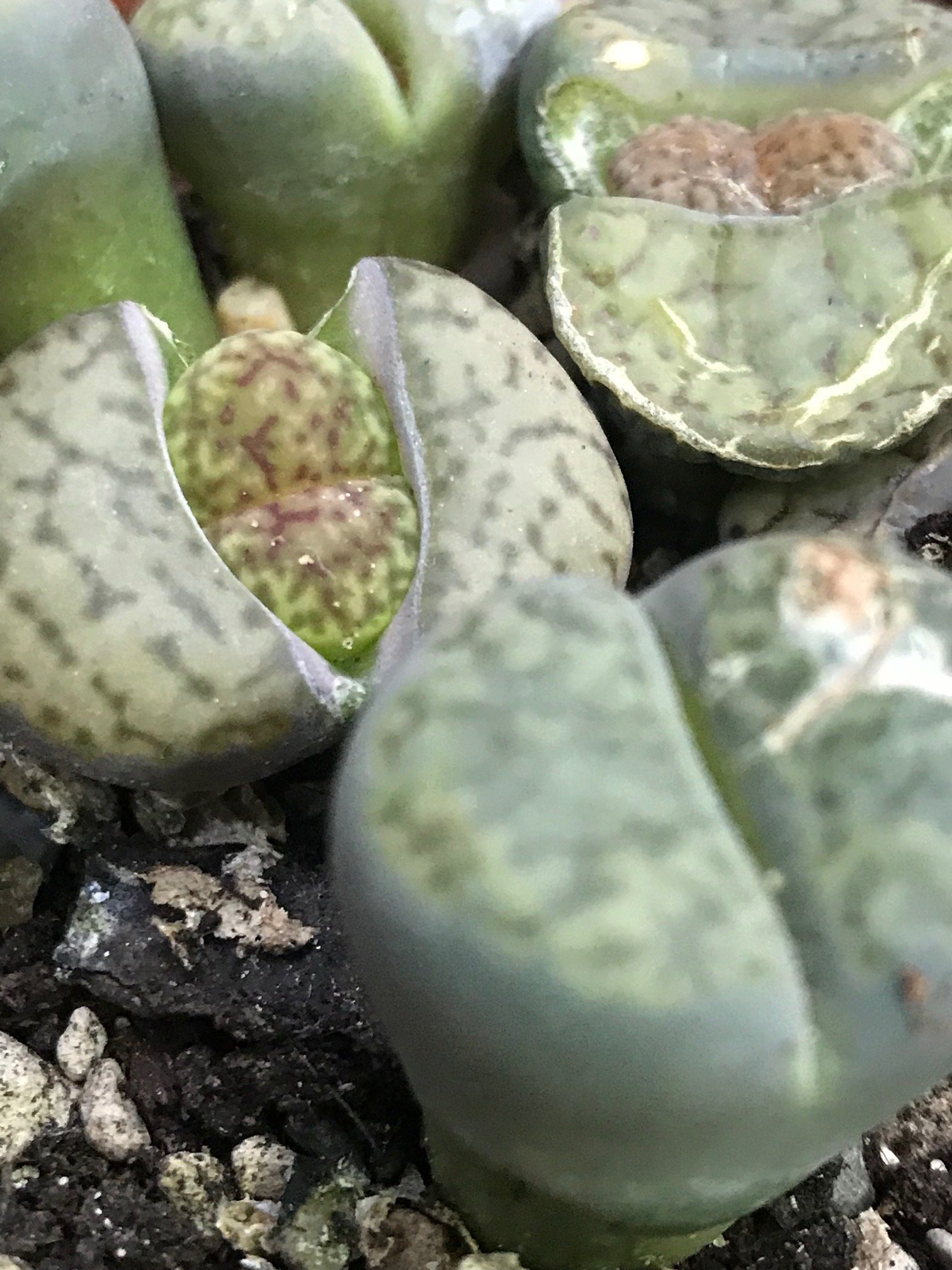 With Lithops, a new pair of leaves will emerge through the fissure once every twelve months. During this time, be sure not to over-water until the new growth fully matures, as basal rot is a key issue with gardeners. Remove the older leaves once they become wholly crispy.

As mentioned above, the term 'Living Stones' doesn't just cover the genus, Lithops, but it also includes the lesser-known Frithia and Conophytum genera. Lithops was first described back in 1922 by Nicholas Brown, using the Greek words for 'stone' and 'head' (lithos & ops). He documented Conophytum, three years later, from a previously unused name of Conophyton, first penned by Adrian Haworth in 1821. Both terms can be translated from Latin and Greek to mean 'cone' and 'leaf' (conos & phyton). Frithia was also penned by Brown, honouring Dr Frith in 1925. 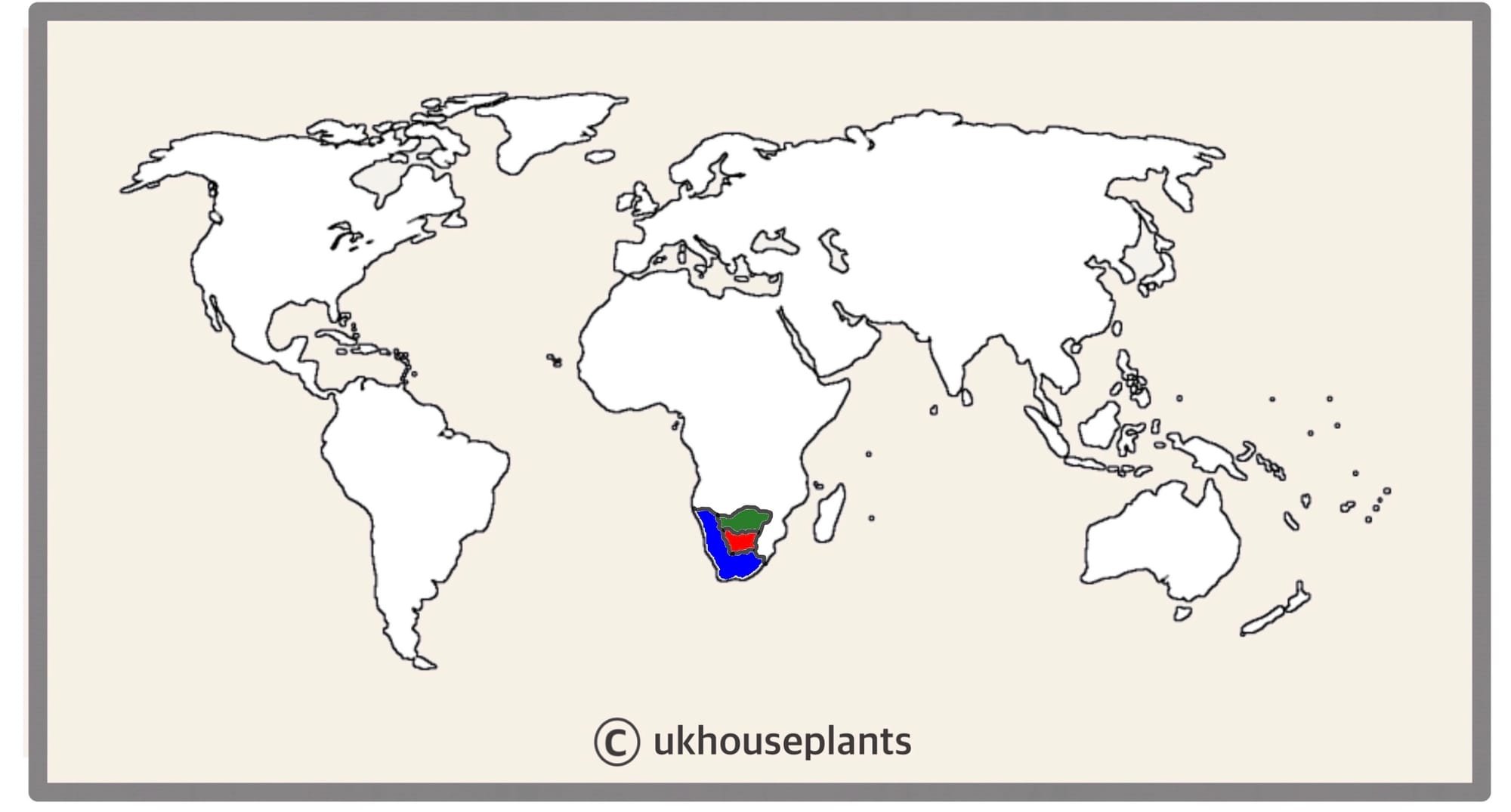 The Distribution of Lithops (all colours), Conophytum in Blue & Frithia in Red.

5° - 32℃   (40° - 90℉)
H1c (Hardiness Zone 12) - Can be grown outdoors during the spring and summer in a sheltered location whilst nighttime temperatures are above 8℃ (46℉), but is fine to remain indoors, too. If you decide to bring this plant outdoors, don't allow it to endure more than an hour of direct sunlight a day as it may result in sun-scorch. Regularly keep an eye out for pests, especially when re-introducing it back indoors.

The overall size can be up to 8cm in height and 15cm in width. The ultimate size will take between 5 - 10 years to achieve when repotted every few years, with a new pair of leaves developing between the fissure or from the base (depending on the species or variety).

Remove the crispy old leaves once the juvenile growth matures, empathising the plant's delicacy. It's best to use your hands to avoid puncturing the specimen's body with sharp utensils, which in turn could cause it to rot and collapse.

Seeds (Very Easy & Quick) - The best soil to use is a 'Cactus & Succulent' labelled potting mix; however, 'Multipurpose' compost with added perlite and sand is also acceptable. Finely and equally sprinkle the seeds onto a bed of moist soil, resisting the temptation to compact it. The best pot to use is a plastic seed tray with adequate drainage, which can be bought at any good garden centre or hardware store. Maintain evenly moist soil and allow the excess water to freely drain from the pot's base to prevent water-logged conditions. The ideal location for successful germination is in a bright, indirect setting with temperatures above 18℃ (64℉) with bottom-heat. Although germination may take only three weeks, it could take up to two months, so don't discard any unsuccessful seeds until this threshold has been surpassed. After six months, separate the specimens into three-per-pot (5cm, 2 inches), treating them as you would with a mature plant.

Basal Offset Division (Easy) - Your plant will produce one or two basal offsets in the coming eighteen months, and can be separated once they have a sufficient root system. If possible, water the soil 24hrs before the main event to reduce the risk of transplant shock when its dry root systems are over-fingered. Take the plant out of its pot and place your fingers close to the nodal junction - compost may have to be removed for better access. Push the chosen offset at a diagonal angle until you hear a gentle snap. Separate the foliage and its root system away from the mother plant, mentally noting the high risk of damage. Transplant in the appropriate sized pot with a fresh batch of 'Cactus & Succulent' labelled soil. Maintain the phrase 'drenches between droughts' and keep in a bright, indirect location away from any direct sunlight. After eight weeks, treat it like a healthy specimen, following the care tips above!

Generally, Living Stones will flower during the start of the cooler period, from late summer to early spring. Although it isn't too difficult to achieve a winter bloom, your plant must be at least three years old and located in an area with morning/evening sunlight. As the temperature decreases, the likelihood of a bloom is much more likely, as the specimen may use stored moisture in the height of the summer heat.

Their flowers largely resemble a daisy, emerging either from its fissure or from the plant's base. Each inflorescence will last up to two weeks, folding up each night to preserve pollen loss. 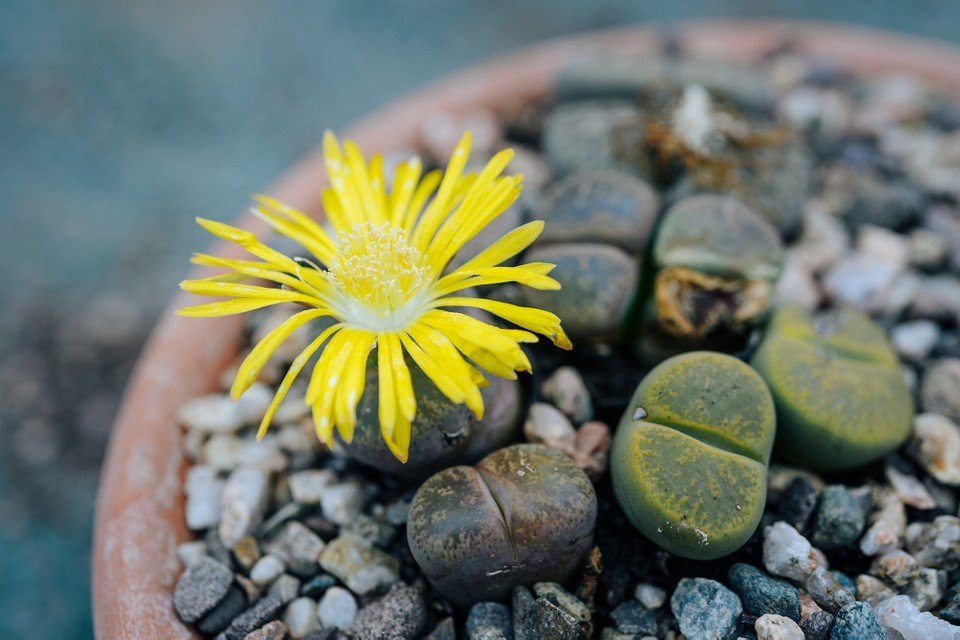 Repot every three to four years in the spring, using a 'Cactus & Succulent' labelled potting mix and the next sized pot with adequate drainage. Living Stones are far better potbound for several years due to the heightened risk of root rot and repotting-issues (like transplant shock) - so only repot if you feel it's wholly necessary.