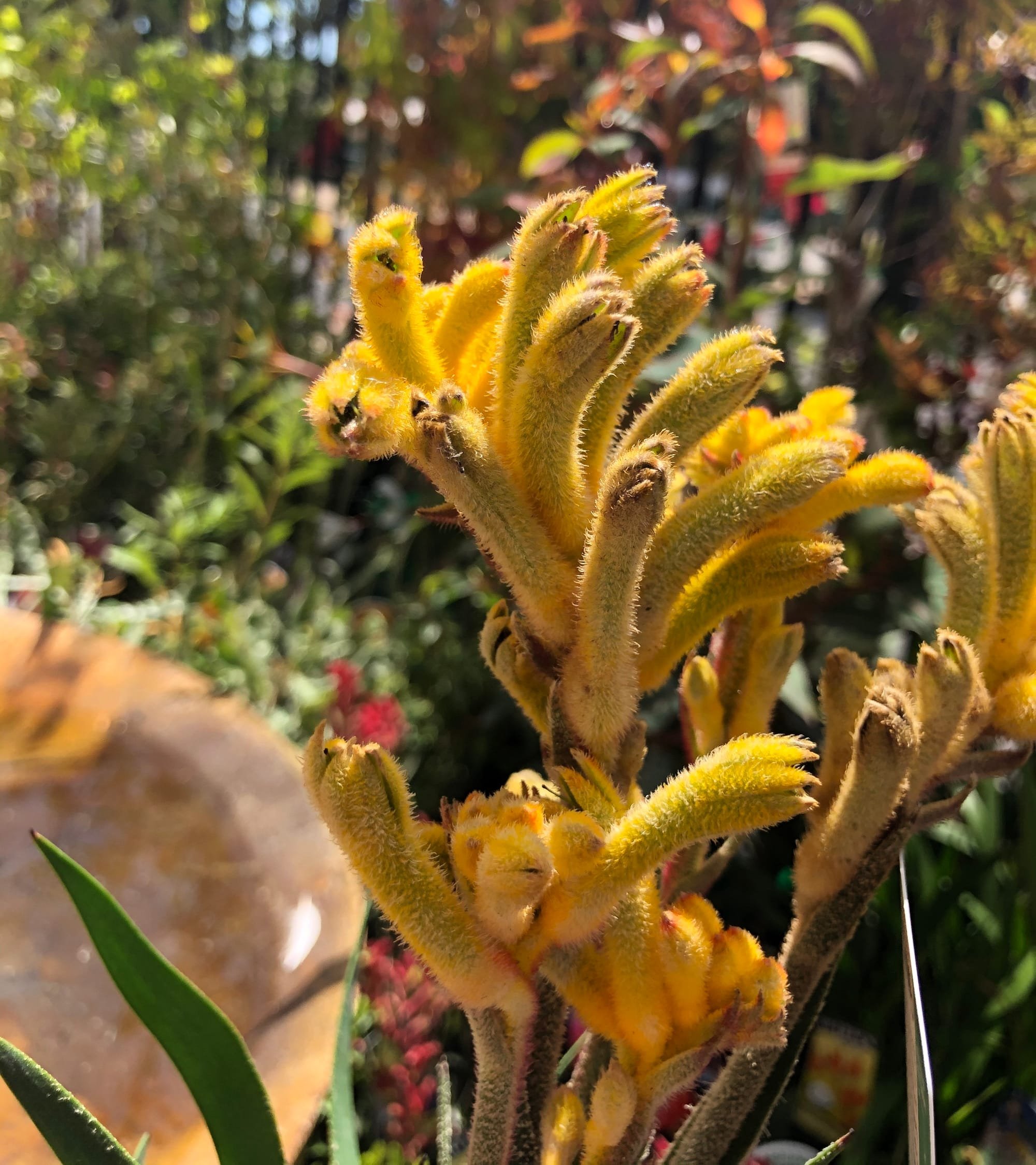 A position that offers a splash of morning or evening sun is best, especially during the autumn and winter months. Avoid more than two hours of direct sunlight a day during the summer, as this will lead to dehydration and sun-scorch. Rapid leaf loss will occur to plants that are placed in too dark locations - if it's difficult to read a book, it'll be too dark for the plant, too!

We'd recommend placing your Kangaroo Paws on either a north, north-east or north-west facing windowsill, or within two metres of a south-facing window. It can also spend the summer months outdoors in a sheltered location. This will improve its overall health by spending time in the fresh outdoors; as long as you bring it in before the night temperature dip below 10℃ (50℉), no harm will be risked.

During the spring and summer, allow the top half of the soil to dry out in between irrigations - reduce this further during the colder months for the replication of its dormancy period. Those situated in darker locations must be watered far less than those located in brighter ones for the prevention of root rot. It's always better to under-water a Kangaroo Paw, due to the species' poor ability to endure anaerobic soil - caused by over-watering. Under-watering symptoms include stunted growth, dry spots appearing on the leaves and yellowing older leaves; these issues are either down to an over-crowded pot, too little light, or forgetfulness. Over-watering symptoms include yellowing lower leaves, brown mushy patches developing in the stems, and root rot. For the latter, take the plant out of its pot and investigate the health below the soil line. If there are visible signs of rot, click on this link to learn about the recommended steps to eradicate this problem.

Low humidity won't affect a Kangaroo Paws too much, as long as you occasionally mist the foliage whilst the radiators are operating. A gentle hose-down once a month will help with the hydration of leaves, but will also wash off any excess dust and pests.

Provide a bright, and cool autumn and winter period around 15ºC  (59ºF)  to reinforce its dormancy. Keep the roots pot-bound to add further stress onto the specimen, which in turn will heighten the chance of flowering. Blooms will generally appear in the spring and summer months, during active growth. Unfortunately, the chance of achieving a show of colour can be difficult in a domestic setting; however, a dormancy period is always welcome to promote better springtime growth. The following steps should be taken from early autumn until the end of winter.

Be sure to provide a bright location with an hour or two of direct sunlight; those kept on an east, east-south or west-facing window are most happy. Avoid deep shade and the use of artificial lighting at night or locations that boast temperatures higher than 18ºC  (64ºF).

During the autumn and winter, fertilisation should be performed at monthly intervals with a 'Houseplant' labelled feed. While the flower stalks are developing or in bloom, use a 'Tomato' fertiliser to provide fortnightly nourishment of potassium.

This is the most significant step; reduce the temperature down by around 5ºC compared to the summertime or place in a room that's between 15º - 17ºC  (59º - 62ºF). You'll be at a significant disadvantage if the ambient temperature is kept constant throughout the year, as Kangaroo Paws will only respond in locations that have daily fluctuations of around 5ºC. Never exceed the minimum temperature as it may lead to plant death or yellowed foliage at a bare minimum. If these steps are followed successfully, you could see a show of blooms in the following summer - but remember, dealing with nature may not always provide the results you'd relish. 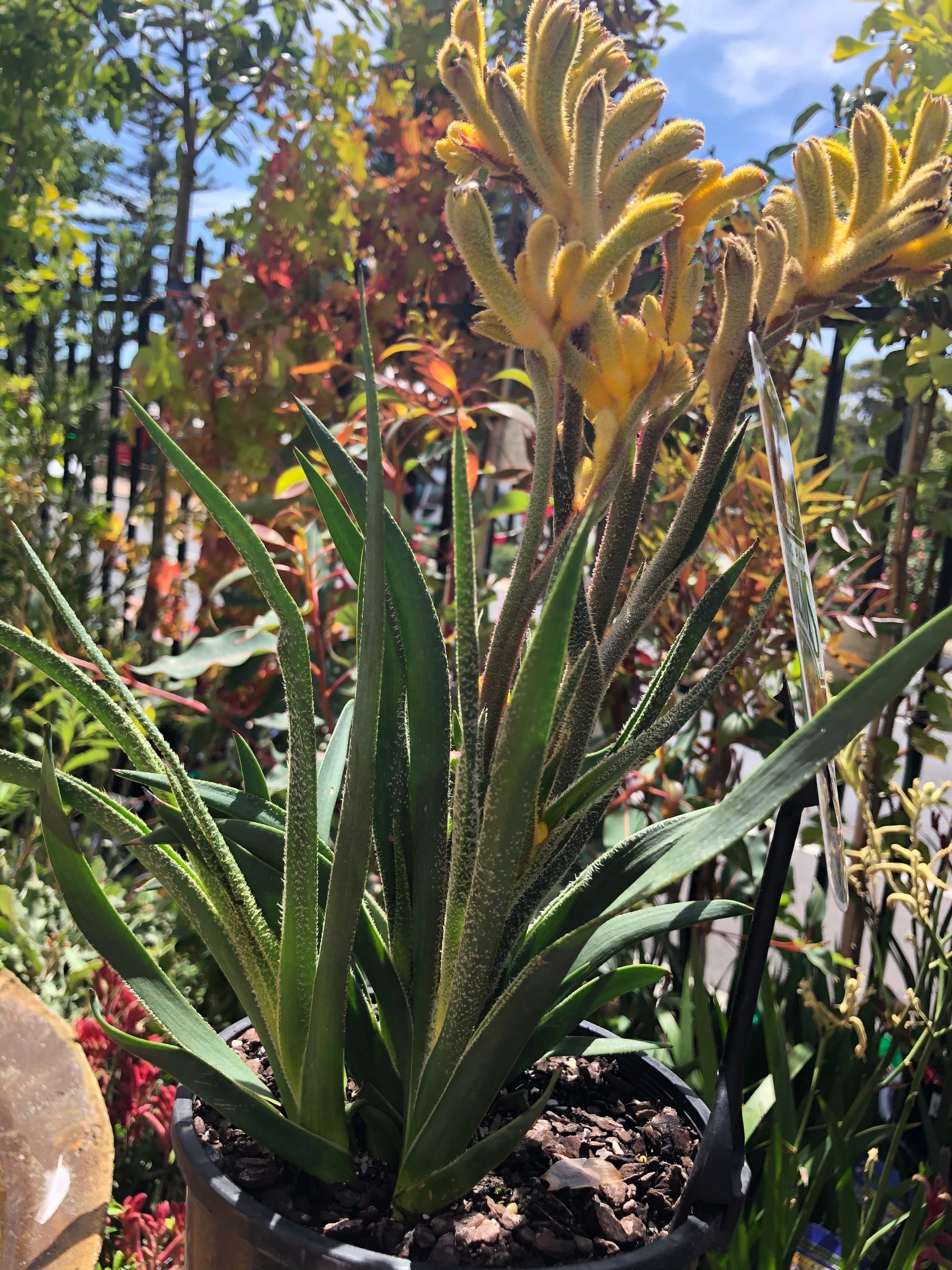 Kangaroo Paws can be bought at many online stores, ranging from £15 to £30, depending on the size. This specimen was £19.99.

Curled leaves and dried brown edges are the result of too little water and over-exposure to the sun. Although Indoor Kangaroo Paws can naturally do well in sun-filled locations, those that haven't acclimatised to the harsh rays will show signs of sun-scorch and environmental shock. Prolonged exposure will significantly speed the process of dehydration, so consider transplantation into a bigger pot in the spring to wrap the roots around moister soil.

Environmental Shock is a familiar occurrence with newly-located specimens, that usually results in stunted growth and flower loss (common). When a plant is relocated into a new, unfamiliar setting, the effects can be catastrophic. The humidity, temperature and light levels will all suddenly shift into different proportions, inflicting great stress the individual. There are two options of addressing this issue; either wait it out or relocate it into a more Kangaroo Paw-friendly environment. As long as the specimen appears healthy with little change to its pre-existing leaves, new nodular growth should emerge from the soil in the following months.

Yellowing older leaves could be a sign of over-watering, but equally is a byproduct of maturity. If the older leaves rapidly become yellow in quick succession, over-watering could be to blame. People don't realise that a plant's root system needs access to oxygen too; when soil is watered, the air will travel upwards and out of the potting mix. A lack of accessible oxygen for the roots will cause them to subsequently breakdown over the oncoming days. Click on this link to learn more about root rot and how to address it.

Always use lukewarm water, and if you choose to use tap water, allow it to stand for at least 24hrs before application. Their root systems tend to be quite sensitive to temperature change, so pouring cold tap water into the pot will not only ironise the roots, but could even cause yellowed halos around each leaf.

Augustin Pyrame de Candolle first documented the species in the 1820's, using the Greek words anises, meaning unequal, and anthos (flowers) that refers to the unequal perianth lobes of the flowers. The specific epithet, flavidus, comes from modern Latin meaning 'yellow' - referring to the colour of its inflorescences (yellow or red). There's also no surprise that Kangaroo Paws originate from Australia, with natural distributions from Cervantes to Ravensthorpe! 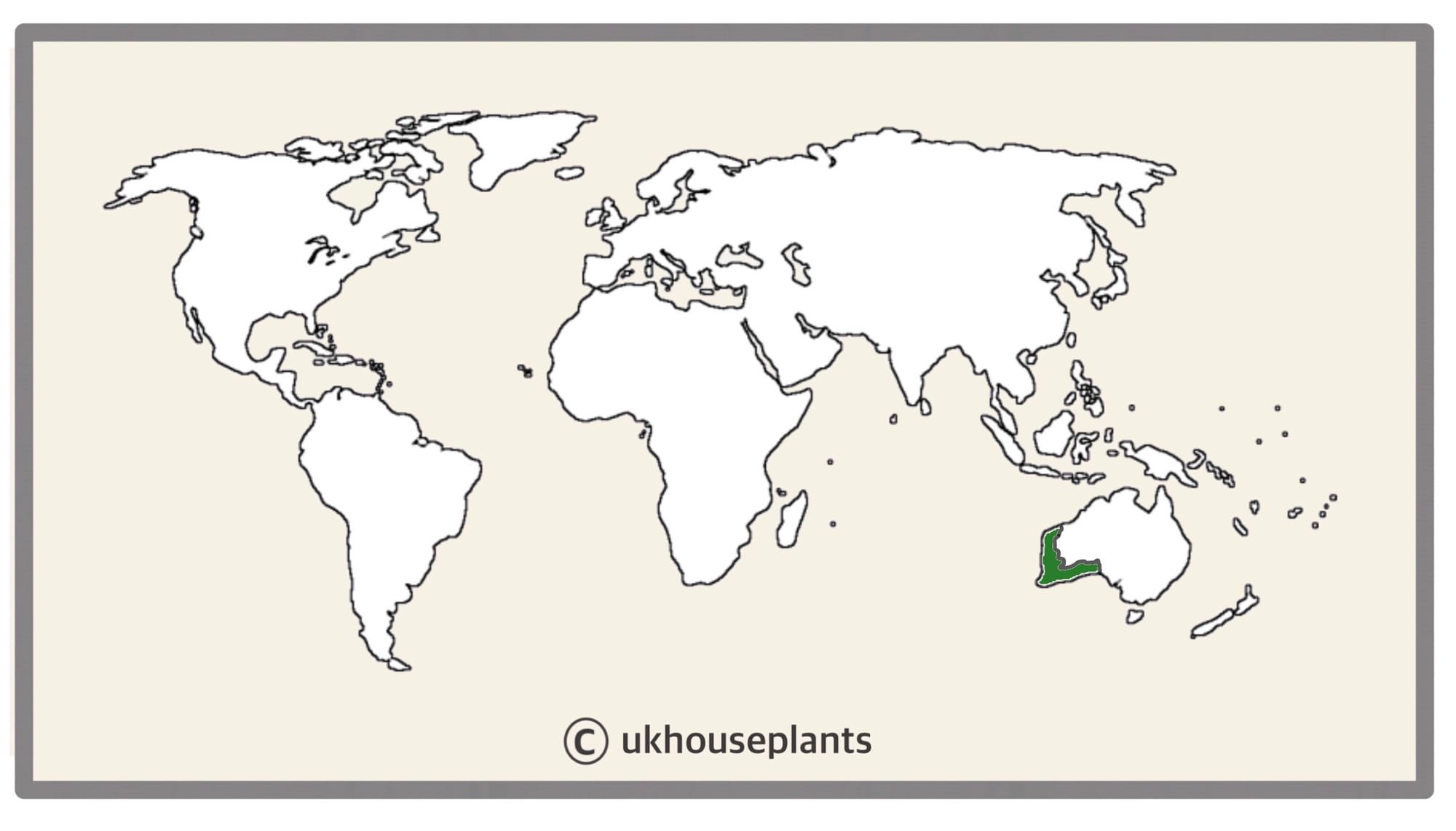 The Distribution of Anigozanthos flavidus.

10° - 23℃  (54° - 75℉)
H1b  (Hardiness Zone 12)  - Can be grown outdoors during the summer in a sheltered location with temperatures above 10℃  (50℉),  but is fine to remain indoors, too. If you decide to bring this houseplant outdoors, don't allow it to endure more than an hour of direct sunlight a day as it may result in sun-scorch. Regularly keep an eye out for pests, especially when re-introducing it back indoors.

Up to 0.5m in height and 0.4m in width. The ultimate height will take between 5 - 10 years to achieve, with several new leaves being put out each year.

Remove yellow or dying leaves, and plant debris to encourage better-growing conditions. While pruning, always use clean utensils or shears to reduce the chance of bacterial and fungal diseases. Never cut through yellowed tissue as this may cause further damage in the likes of diseases or bacterial infections. Remember to make clean incisions as too-damaged wounds may shock the plant, causing weakened growth and a decline in health. Remove the flowers as they spend, which may stimulate the development of new buds in due course.

Rhizomatous Offset Division (Easy to Moderate) - Separating the basal offsets into their own pot will not only expand your plant collection, but it'll also slow the process of becoming pot bound. The best time to divide is during the summer, after flowering, with the 'pup' developing at least two mature leaves. Gently brush away some of the soil to gain better access to the pup's base (lower stem) where the roots will be housed. While using a clean pair of secateurs or scissors, cut the stem with at least two root strands attached to its base. Set the pup in an appropriate-sized pot with adequate drainage and a 'Cactus & Succulent' labelled compost. The ideal location would provide bright, indirect light and temperatures above 15℃ (59℉). Maintain mostly moist soil, allowing the top third to dry out in between hydrations. After a month or two, treat it like a matured specimen by using the care tips mentioned above!

Most specimens will flower in the spring, producing red, white, yellow or pink flowers. The species' nickname, 'Kangaroo Paws', comes from the tubular-shaped inflorescences that are covered in soft hairs - mimicking the individual toes of a Kangaroo. Unfortunately, it's doubtful for a specimen to flower in domestic settings due to the unfavourable growing conditions of low light, poor dormancy periods & restricted roots. Scroll to the top image to see the flowers of a Kangaroo Paw.

Repot every two years in the spring, using a 'Cactus & Succulent' labelled potting mix and the next sized pot with adequate drainage. Kangaroo Paws are far better being potbound for several years due to the heightened risk of root rot and repotting-issues (like transplant shock), so only repot if you feel it's wholly necessary - restricted root growth will also increase the chance of blooms, too.