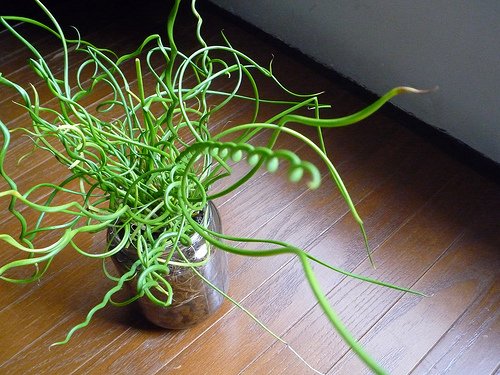 A position that offers a splash of morning or evening sun is best, especially during the autumn and winter months. Avoid more than two hours of direct sunlight a day during the summer, as this will lead to dehydration and sun-scorch. Rapid leaf loss will occur to plants that are placed in too dark locations - if it's difficult to read a book, it'll be too dark for the plant, too!

We'd recommend placing your Juncus on either a north, north-east or north-west facing windowsill, or within a metre of a south-facing window. It can also spend the summer months outdoors in a sheltered location or in a semi-shaded conservatory. This will improve its overall health by spending time in a brighter environment; as long as you bring it in before the night temperature dip below 10℃  (50℉),  no harm will be risked.

Keep the soil evenly moist, allowing only the top inch or two to dry between waters. If you're prone to forgetfulness, we'd recommend introducing a watering-rota (i.e. every five days or so). Under-watering symptoms include stunted growth, crispy patches forming on its leaves and yellowing leaves. Over-watering symptoms include mouldy soil, stunted growth, brown mushy patches developing in the stems and root/basal rot. For the latter, take the plant out of its pot and investigate the health below the soil line. If there are visible signs of rot, click on this link to learn about the recommended steps to eradicate this problem. It is, however, practically impossible to over-water a Juncus!

Because of the near-constant moisture its soil, the natural humidity levels will be rather high. We wouldn't recommend over-misting the foliage due to the risk of a disease called 'Botrytis'.

Curled leaves and dried brown edges are the result of too little water and over-exposure to the sun. Although Juncus can naturally do well in sun-filled locations, those that haven't acclimatised to the harsh rays will show signs of sun-scorch and environmental shock. Prolonged exposure will significantly speed the process of dehydration, so consider transplantation into a bigger pot in the spring to wrap the roots around moister soil.

Yellowing older leaves could be a sign of over-watering, but equally is a byproduct of maturity. If the older leaves rapidly become yellow in quick succession, over-watering could be to blame. People don't realise that a plant's root system needs access to oxygen too; when soil is watered, the air will travel upwards and out of the potting mix. A lack of accessible oxygen for the roots will cause them to subsequently breakdown over the oncoming days. Click on this link to learn more about root rot and how to address it.

Yellowed murky leaf-tips could be the product of many different cultivation issues. Firstly, you may not be watering the soil enough. If the potting mix becomes dry too frequently, you'll run the risk of permanently damaging its older foliage. Further, you're potentially using too cold water or tap water that hasn't been allowed to sit for 24hrs. This period of rest will not only bunk-up its temperature, but the harsh chemicals used to preserve water hygiene (fluoride & chloride) will begin to settle after a few hours. If possible, use fresh bottled water from a shop or supermarket to prevent further chemical burns. The final culprit might be lack of fertilisation, with regular feeds being paramount for long-lasting, healthy leaves. If the specimen hasn't been nourished in over two months, it'll begin to show signs of nutrient deficiencies seen in this article.
If this common problem has occurred with your specimen, remove the affected leaves (not sections on the leaf) and improve the growing conditions considerably. Fertilise regularly with lukewarm water and be sure to allow the top third to dry out in between hydrations.

Always use lukewarm water, and if you choose to use tap water, allow it to stand for at least 24hrs before application. Their root systems tend to be quite sensitive to temperature change, so pouring cold tap water into the pot will not only ironise the roots, but could even cause yellowed halos around each leaf.

Carl Linnaeus first documented the genus of Juncus back in the 1750's, using the Latin words for 'rush', referring to the cylindrical hollow stalk-like leaves of many species. The specific epithet, effusus, comes from modern Latin meaning 'spread loosely' in reference to its sporadic growth habits. The species can occur close to riverbeds, and has a wide distribution across almost all of the continents - with the exception of Australasia and Antarctica. The cultivar 'Spiralis' doesn't occur in the wild as it is an artificial hybrid. 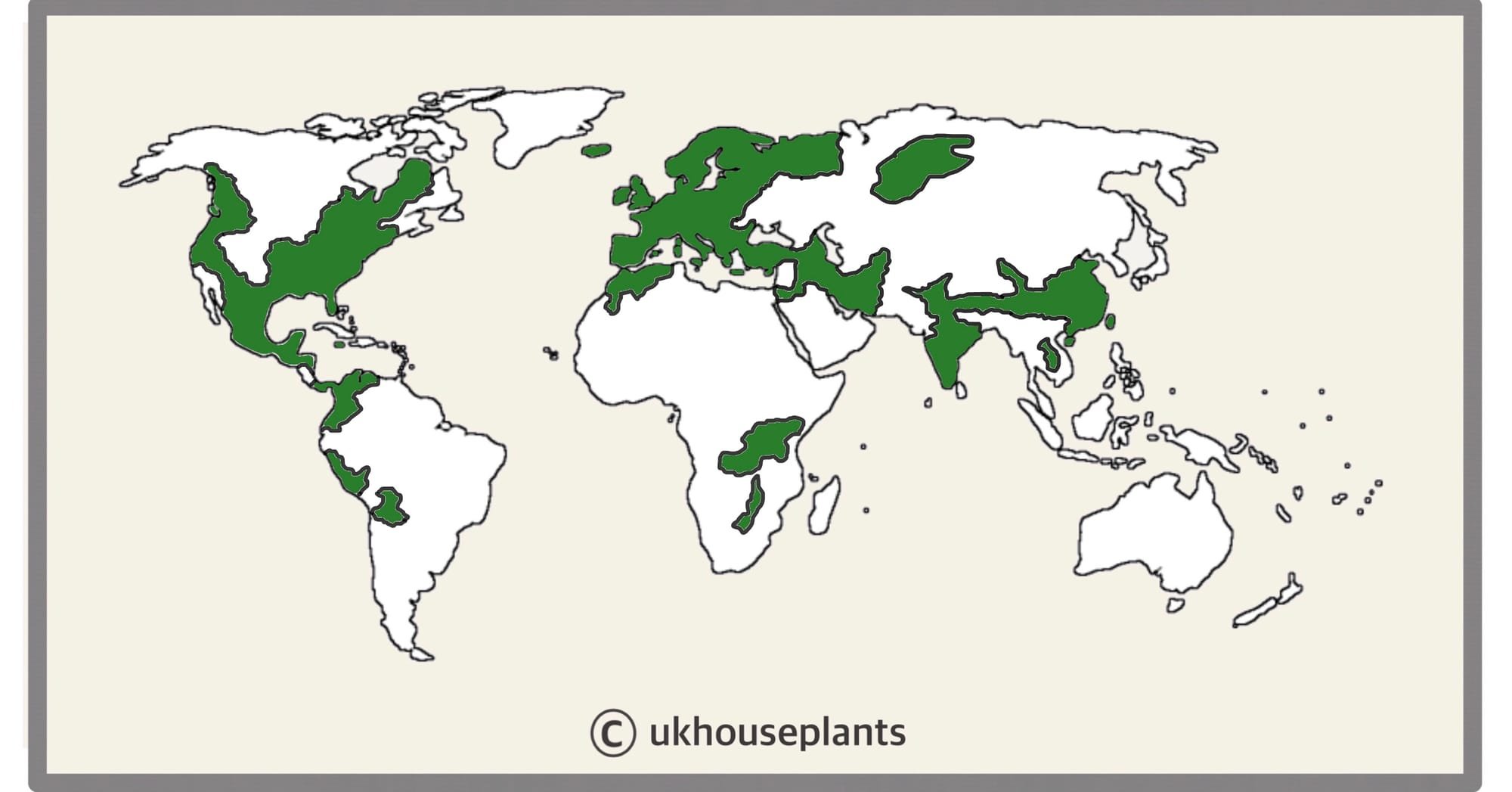 The Distribution of Juncus effusus.

-2° - 26℃  (28° - 79℉)
H3 (Hardiness Zone 9) - Tolerate to temperatures below freezing. Although it can survive frosts and thin snow, refrain from bringing it indoors overnight if the room temperature is above 5℃ (40℉), as a sudden change in temperature may cause environmental shock with weakened spring growth and a lack of flowers over the season's course. Instead, either leave it outdoors or in an unheated conservatory, brightly lit garage or a greenhouse until the risk of frost has elapsed.

When grown indoors, your Juncus can reach up to 0.5m in leaf length. The ultimate height will take between 5 - 8 years to achieve, with several new leaves being put out each year.

Remove yellow or dying leaves, and plant debris to encourage better-growing conditions. While pruning, always use clean utensils or shears to reduce the chance of bacterial and fungal diseases. NEVER cut through yellowed tissue of its leaves as this may cause further damage in the likes of diseases or bacterial infections - cut the WHOLE leaf instead at its base. Remember to make clean incisions as too-damaged wounds may shock the plant, causing weakened growth and a decline in health. Remove the flowers as they spend, which may stimulate the development of new buds in due course.

Via Seed or Rhizomatous Cuttings.

Rhizomatous Offset Division (Moderate) - Separating the basal offsets into their own pot will not only expand your plant collection, but it'll also slow the process of becoming pot bound. The best time to divide is during the summer, with the basal offset developing at least two mature leaves. Gently brush away some of the soil to gain better access to the base between the mother and offset's root joining. While using a clean pair of secateurs or scissors, cut the stem with at least two root strands attached to its base. Set the pup in an appropriate-sized pot with adequate drainage and a 'Houseplant' labelled compost. The ideal location would provide bright, indirect light and temperatures above 15℃ (59℉). Maintain mostly moist soil, allowing the top inch to dry out in between hydrations. After a month or two, treat it like a matured specimen by using the care tips mentioned above!

It's highly rare for an indoor Juncus to flower, but for the purpose of this section, we'll describe it. The small cream to orange coloured flowers are arranged in clusters along a large, thin shaft that hangs proudly over the foliage line. You're most likely able to see a specimen in bloom during the spring or summer months, during warmer weather. 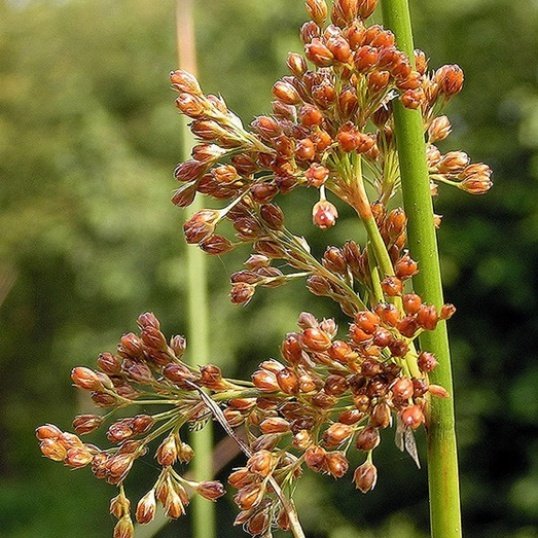 The flowers of Juncus effusus.

Repot every three years in the spring, using a 'Houseplant' labelled potting mix and the next sized pot with adequate drainage. Juncus are far better potbound for several years due to the heightened risk of root rot and repotting-issues (like transplant shock), so only repot if you feel it's wholly necessary.