An hour or two of direct sunlight is best for quality growth. Never situate your Gloriosa in a dark setting as the chance of bacterial diseases, like basal collapse, are far too likely for such a beautiful specimen. The frequency of irrigations solely rely on the amount of sunlight received each day; those situated in slightly darker locations must be far less than with those in strong light. We'd recommend situating yours in a north, north-east or north-west facing window, or in a semi-shaded conservatory or porch for best results.

Allow the top third of the soil to dry out in between waters, reducing this slightly further in the autumn and winter. In some cases, your Gloriosa may lose its foliage from late autumn onwards, which is normal behaviour for specimens at that time of year. Scroll down to 'Dormancy Care & Annual Flowers' for more information on what to do. Under-watering symptoms include a weakened stem accompanied by a loss of flowers, stunted growth and the greying or yellowing of leaves - these issues are commonly down to forgetfulness or too much heat or sunlight. Over-watering symptoms include yellowing of leaves, wilting, basal collapse, and plant death; these issues are commonly due to an area that's too dark, excess moisture in the soil, a too water-retentive compost or water-logging. Scroll down to 'Common Issues' for more information on how to address this problem.

Average room humidity is more than enough to occupy a Gloriosa, as too high humidity and poor air circulation will result in powdery mildew. Do not mist the flowers as this will cause botrytis petal blight that can spread quickly if not dealt with accordingly.

Use a fertiliser high in potassium to prolong its flowers during the festive period, at fortnightly intervals - an excellent example would be a Tomato Feed. Regular fertilisers, for instance, BabyBio or Miracle-Gro, will still do the job but will favour foliar growth instead. For the rest of the year, a 'Houseplant' fertiliser can be used to supplement the plant, at monthly intervals. 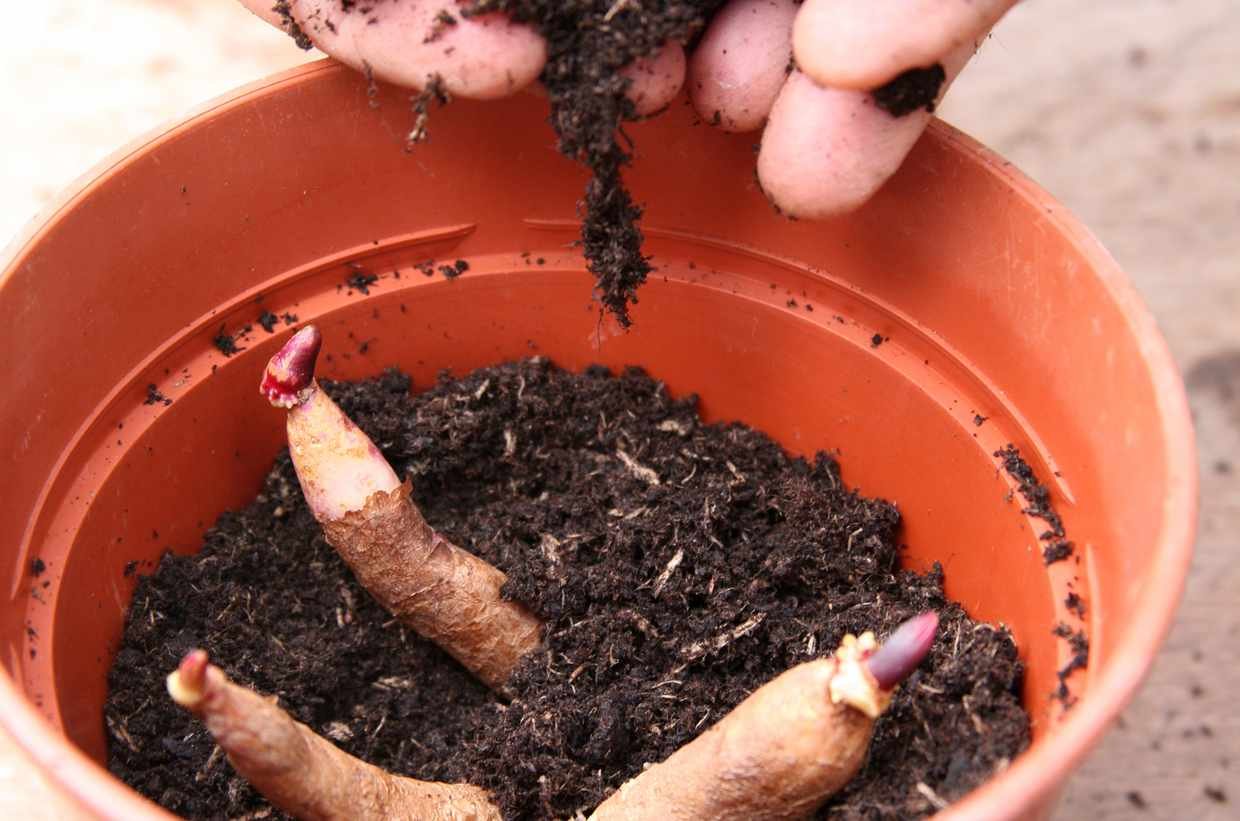 Pictured in spring, the live tubers are now ready to be planted into a well-draining potting mix, with their necks just above the soil line. Copyright: Gardeners' World.

Shortly after flowering, its foliage will begin to yellow and die off in the early autumn. Prune the foliage back an inch above the soil line using a clean pair of scissors or secateurs once all of the foliage has fully yellowed. You can either leave the tuber in the compost, or remove it from the soil and prune off its roots to leave it bare over winter. Place the tuber (whether in the soil or on its own) in a dark location that provides low humidity and temperatures around 10°C  (50°F)  for a couple of months. Water sparingly so that the tuber is just 'ticking over' but keep in mind that too much soil moisture will cause root or pythium rot. Once foliage starts to re-emerge in spring, weakly fertilise the plant using a 'Cacti & Succulent' labelled feed and increase the number of waters per week. Relocate the specimen in a bright location with little to no direct sunlight so that it can acclimate to the new surrounding. Keep the soil moist, allowing the top third to dry in between waters and remember to keep an eye for the flower buds that'll develop at the top of the new tuberous growths. 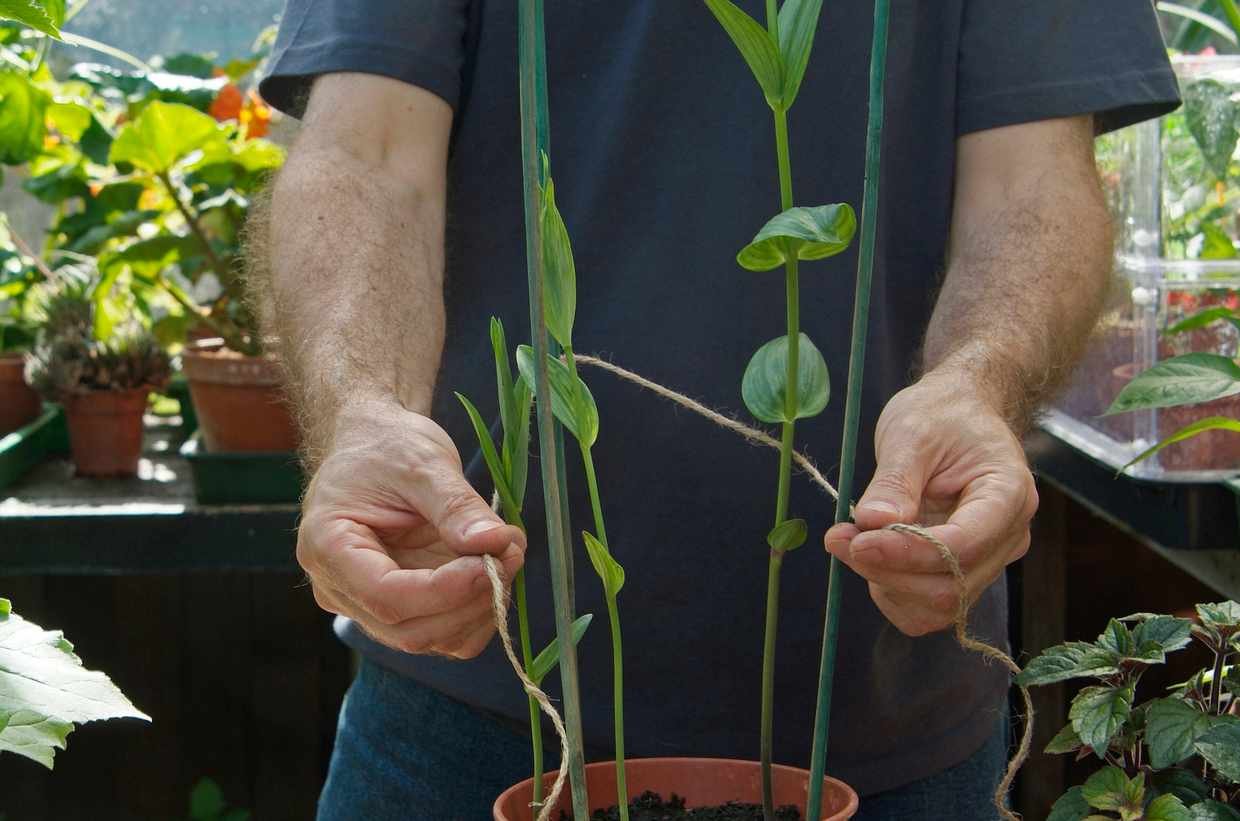 Tying your Gloriosa along a structure is key to complement its fast-paced growth. Copyright: Gardeners' World.

If your Gloriosa develops basal collapse, it will spell the end of its life. The tuber, which is located below the soil line and acts like a modified stem, is the lifeline for a successful specimen, so any issues of rot will kill it outright. If yours has problems of this, be sure to take the plant out of the pot and inspect its roots. Prune away any rotten areas and check its base for a softened profile. Remove any individual plants that have a rotten bottom and repot the healthy specimens in a fresh batch of 'Cactus & Succulent' compost. Provide a brighter location and reduce the number of waters slightly to avoid further rot. Discard the plant if there is no sign of health below the soil line. 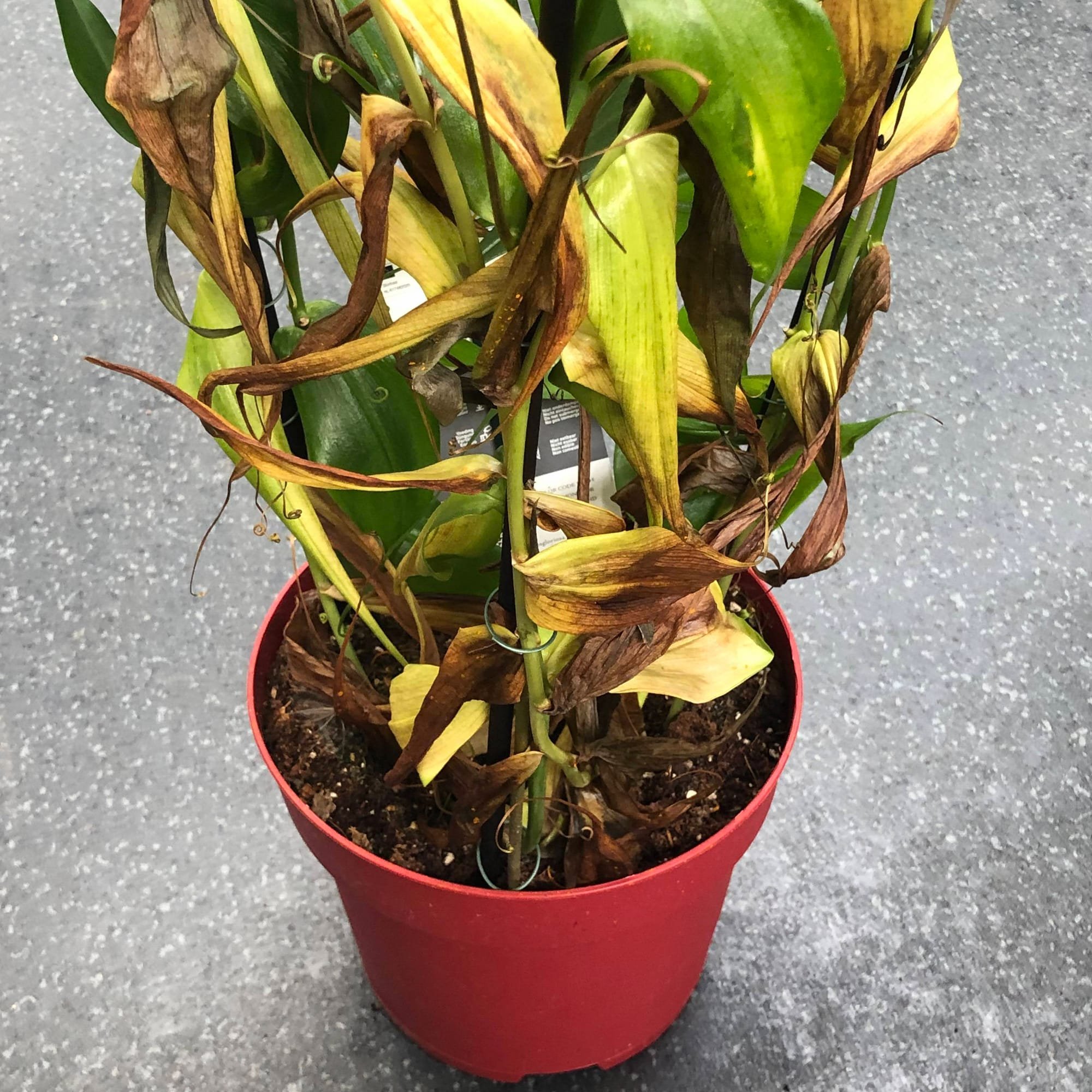 Shortly after flowering, your plant will eventually begin to decline in time for its dormancy period. This is normal behaviour for Gloriosa and should bounce back in the following spring. Prune the stems around two inches from the soil line and discard the foliage. Scroll up to 'Dormancy Care & Annual Flowers' to learn more.

If your foliage begins to brown or yellow over during the autumn & winter (shortly after flowering), it shouldn't cause concern as the specimen is entering its dormancy. Instead of manual pruning its body, allow the plant to drop its leaves naturally to decrease the risk of shock. Puncturing healthy tissue also may result in a bacteria infection in the wound that can quickly spread across the whole plant. Once the shedding of leaves has elapsed, relocate the specimen in a location that offers bright, indirect light and good air circulation, mentioned in 'Dormancy Care & Annual Flowers'.

A lack of flowers is caused by an insufficient dormancy period, where the temperatures are kept more or less the same over the year. Reduce the temperature by a couple of degrees over the autumn and winter months, along with fewer irrigations to ensure a well-spent dormancy. As spring arrives, the natural temperature will begin to increase, with this is being the perfect time to increase waters and fertilisation. Remember, the warmer the summer days are, the more likely a specimen is to reflower.

Carl Linnaeus first described the species in 1753, using the Latin word for 'Glory', along with the specific epithet superba, meaning 'superb' that refers to the striking red and yellow flowers. Its distribution is large, ranging from mainland Africa and South Asia in grasslands, woodlands and sand dunes. 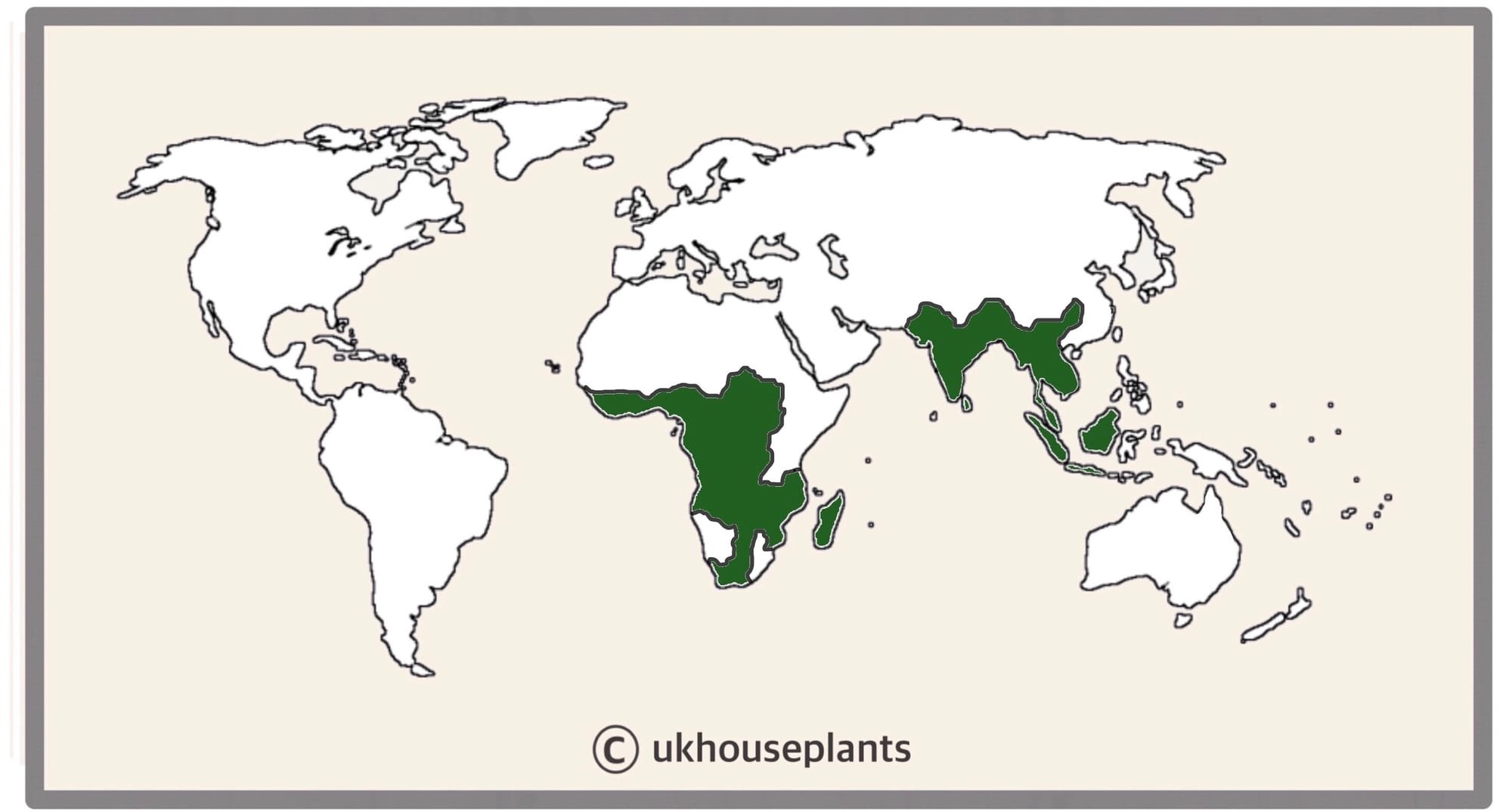 The Distribution of Gloriosa superba.

12° - 24°C  (54° - 75°F).
H1b (Hardiness Zone 12) - Can be grown outdoors during the summer in a sheltered location with temperatures above 12℃  (54℉),  but is fine to remain indoors, too. If you decide to bring this plant outdoors, don't allow it to endure any direct sunlight as it may result in sun-scorch and dehydration. Regularly keep an eye out for pests, especially when re-introducing it back indoors.

Up to 0.4m in height and 0.3m in width once they reach maturity. The ultimate height will take between 5 - 8 years to achieve.

At the start of the season, train the loose vines along a trellis that's twice the height of its pot. As mentioned in 'Dormancy Care & Annual Flowers', allowing the specimen to die back is critical for its success in the following year. Remember always to use a clean pair of scissors and locate it in a bright, cool location with good air circulation.

Offset Division (Pups) (Easy) - Separating the basal offsets into their own pot will not only expand your plant collection, but it'll also slow the process of becoming pot bound. The best time to divide is during the spring or summer, with the pup's height surpassing 8cm (3 inches). Gently brush away some of the soil to gain better access to the pup's base, where its roots will be housed. While using a clean pair of secateurs or scissors, cut the cord with at least two root strands attached to its base. Set the pup in an appropriate-sized pot with adequate drainage and a houseplant-labelled compost. The ideal location would provide bright, indirect light and temperatures above 15℃  (59℉). Maintain evenly moist soil, allowing the top third to dry out in between hydrations. After a month or two, you'll be able to treat it like a matured specimen by using the care tips above.

Gloriosa will bloom from late spring until midsummer, producing beautiful orange and yellow flowers. The individual flowers will last for around a week, with the overall show spanning several weeks.

For the first two years, you won't need to repot the plant as pot-bound roots are more likely to stimulate a show of blooms. After the second year's dormancy period (start of the third year's spring), repot the specimen in the next-sized pot with adequate drainage, using a 'Cactus & Succulent' potting-mix. As mentioned in 'Dormancy Care & Annual Flowers', you'll have the choice whether to remove the tuber from the soil, or leave it in the pot and compost with its roots. We'd recommend leaving the specimen as it is, as it'll reduce the risk of damaging the tuber's node when over-touched.

Keep an eye out for mealybugs, spider mites, fungus gnats, slugs, snails & root mealybugs that'll locate themselves in the cubbyholes and undersides of the leaves, with the exception of the latter in soil. Common diseases associated with Gloriosa are root rot, leaf-spot disease, botrytis, rust, pythium rot, powdery mildew & southern blight - click here to learn more about these issues.

This plant is classified as 'extremely' poisonous, so if small sections are eaten, vomiting, nausea, and even fatality may occur. Consumption of any quantity must be dealt with quickly; acquire medical assistance for further information.