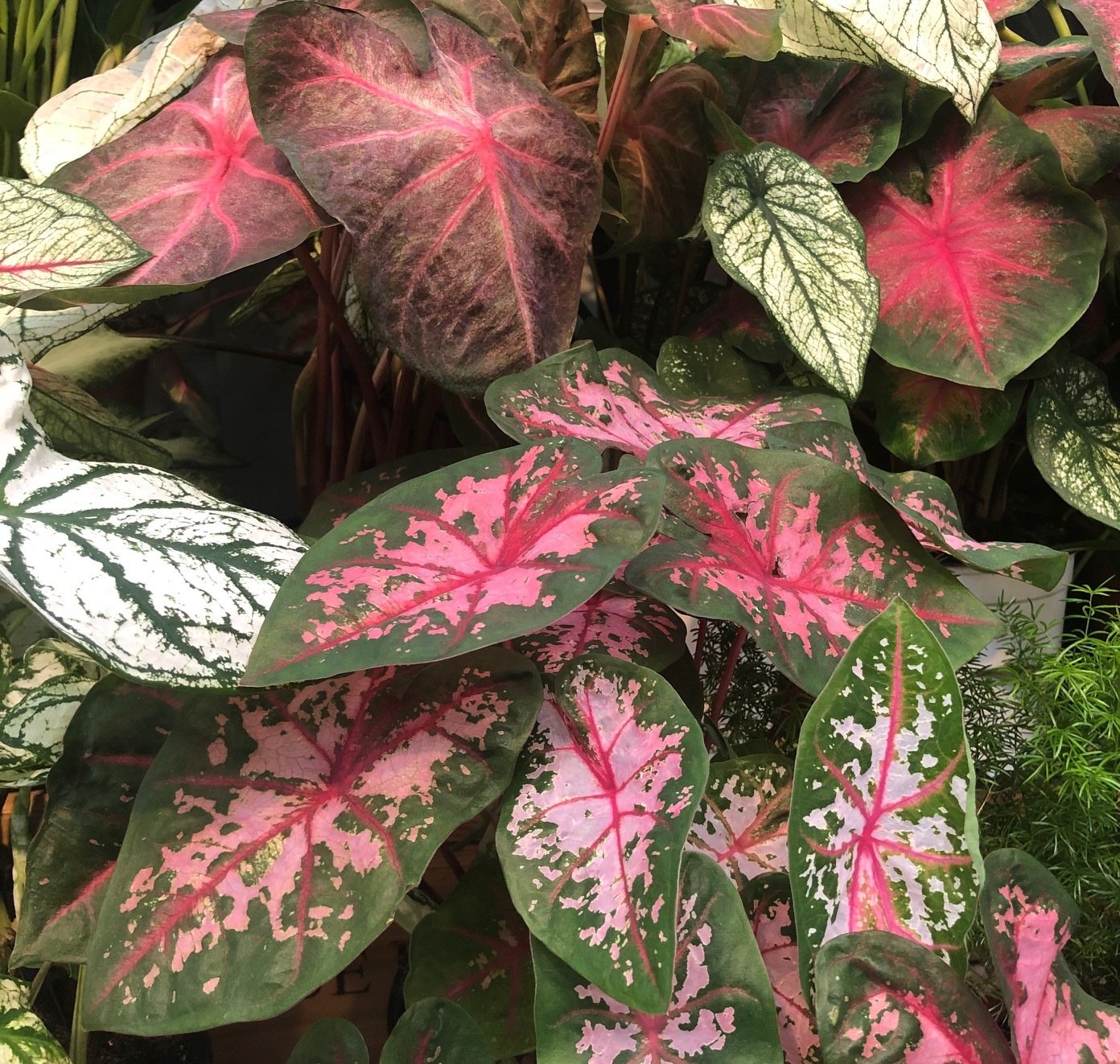 Caladiums require overhead lighting to promote 360º, all-round complexion. Areas that are too far from the windows will result in lopsided growth and a loss of variegations or coloured patterns. We'd recommend growing a Caladium in an area that offers bright, indirect light with the possibility of morning sunlight throughout the autumn and winter months. Be cautious, though, as overexposure during the height of summer will result in sun-scorch and severe dehydration.

Less is more with these specimens. Excessive or unnecessary irrigations will quickly anger the plant, resulting in root rot and lower yellowing leaves. Caladiums have a tuberous base, meaning that water and nutrients can be stored in the underground vessel for times of drought. Water the specimen once the top third of the soil dries out, reducing this further in the autumn and winter. Over-watering symptoms include yellowing older leaves, wilting or curled foliage, mouldy soil and a rotten base. These issues are commonly the product of too little light, pure incompetence or a lack of drainage. For more information on how to address root rot, be sure to click on this link. Alternatively, under-watering symptoms include wilting, little to no growth, greying leaves and browning leaf edges, which are commonly down to too much light/heat, or forgetfulness.

They'll thrive in bright, moist environments, so average room humidity will not be enough for Caladiums. Introduce a pebble tray to maintain a high level of moisture, along with downplaying the risk of browning leaf-tips. Hose or mist the foliage from time to time to hydrate the leaves and keep the dust levels down.

Supplement fortnightly using a houseplant-labelled feed in the growing period, reducing it to monthly intervals in the autumn and winter. Never apply 'ready to pour' feed without a quick drink of water beforehand as the combination of dry soil and sharp chemicals may result in root burn. 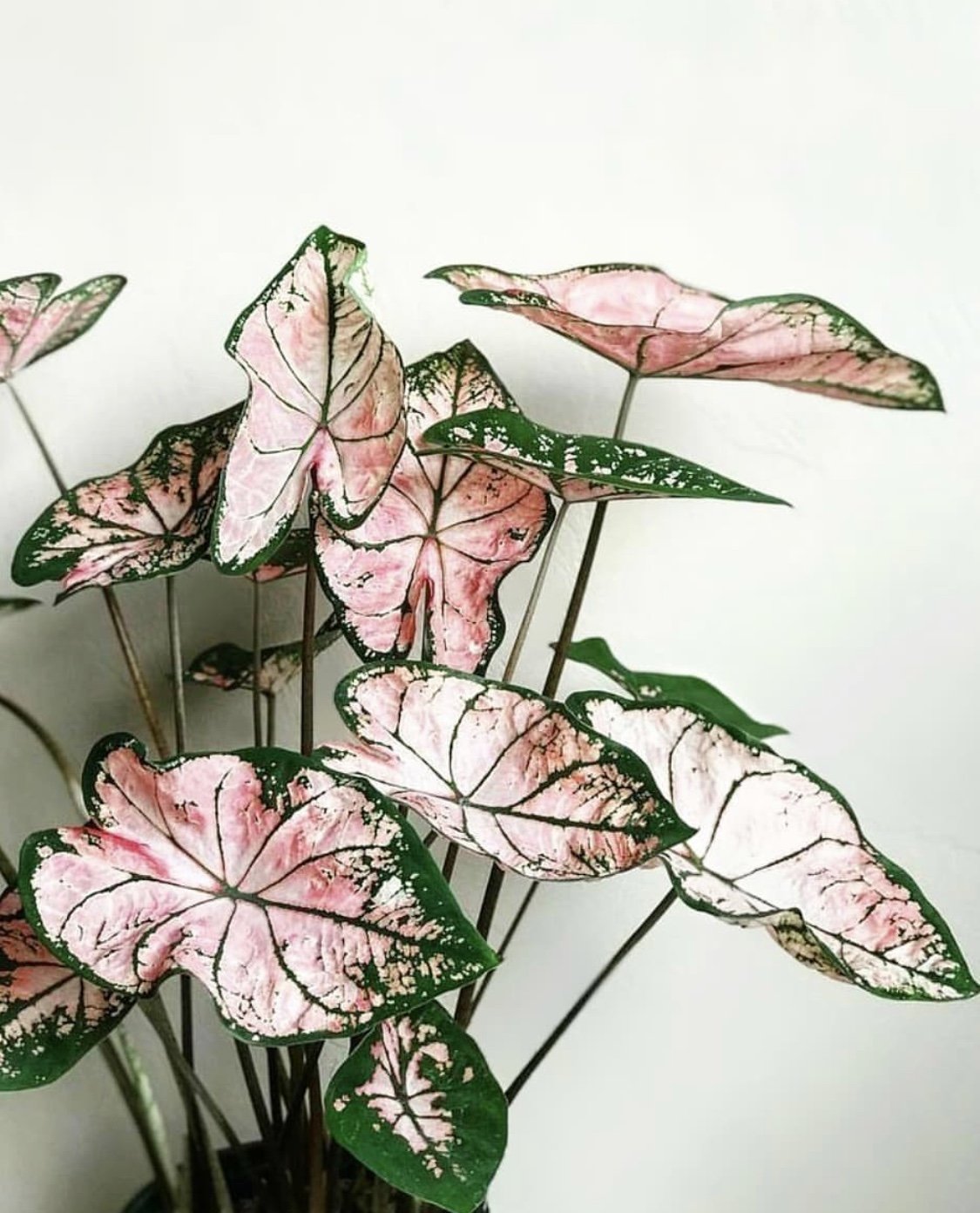 Excessive yellowing older leaves are a clear sign of over-watering, usually caused by too little light. Although Caladiums can do well in darker locations, the frequency of irrigations must be reduced to counteract the chance of root rot. Most don't realise that a plant's root system needs access to oxygen too; when soil is watered, the air will travel upwards and out of the potting mix. A lack of accessible oxygen for the roots will cause them to subsequently breakdown over the oncoming days. Click on this link to learn more about root rot and how to address it.

Brown crispy new-growth that's become deformed is the product of over-exposure to the sun and dehydration. As mentioned previously, Caladiums will grow best in bright, indirect light with regular waters. Remove the affected areas and improve the growing conditions to counteract this issue occurring again. In some cases, Spider Mite could be the culprit for the abnormality, with small, near-transparent critters slowly extracting the chlorophyll out of the leaves. Have a check under the rest of the foliage, most notably along the midrib, for small webs and gritty yellow bumps. Click here to read our article about the eradicating Spider Mite, along with some extra tips that you may not find elsewhere!

A loss of variegations is caused by too little light. Although Caladiums is an excellent choice for shady locations, it'll come at the cost of its variegations. Move the plant into a brighter area with minimal direct sunlight to allow the variegations to appear on the new growth. If you aren't entirely displeased about the loss, simply skip this step. Alternatively, extreme variegations that hinder the plant from developing chlorophyll (green pigmentation) is typically caused by too much sunlight.

A reduction of leaves over the autumn and winter is entirely normal when the plant is serving its dormancy. Many of the older leaves will begin to yellow and wilt, thus leaving you with a few juvenile green leaves. Reduce the frequency of waters and fertilisation to counteract the heightened chance of root rot (slowed growth & darker days will result in less water-uptake in the plant), until the following spring. If, however, all of the leaves die back, exposing just its tuber, maintain a bright and cool environment around 15ºC (59ºF), along with infrequent waters. Allow almost all of the soil to dry out in between hydration and increase irrigations once the new juvenile growth appears in the spring. 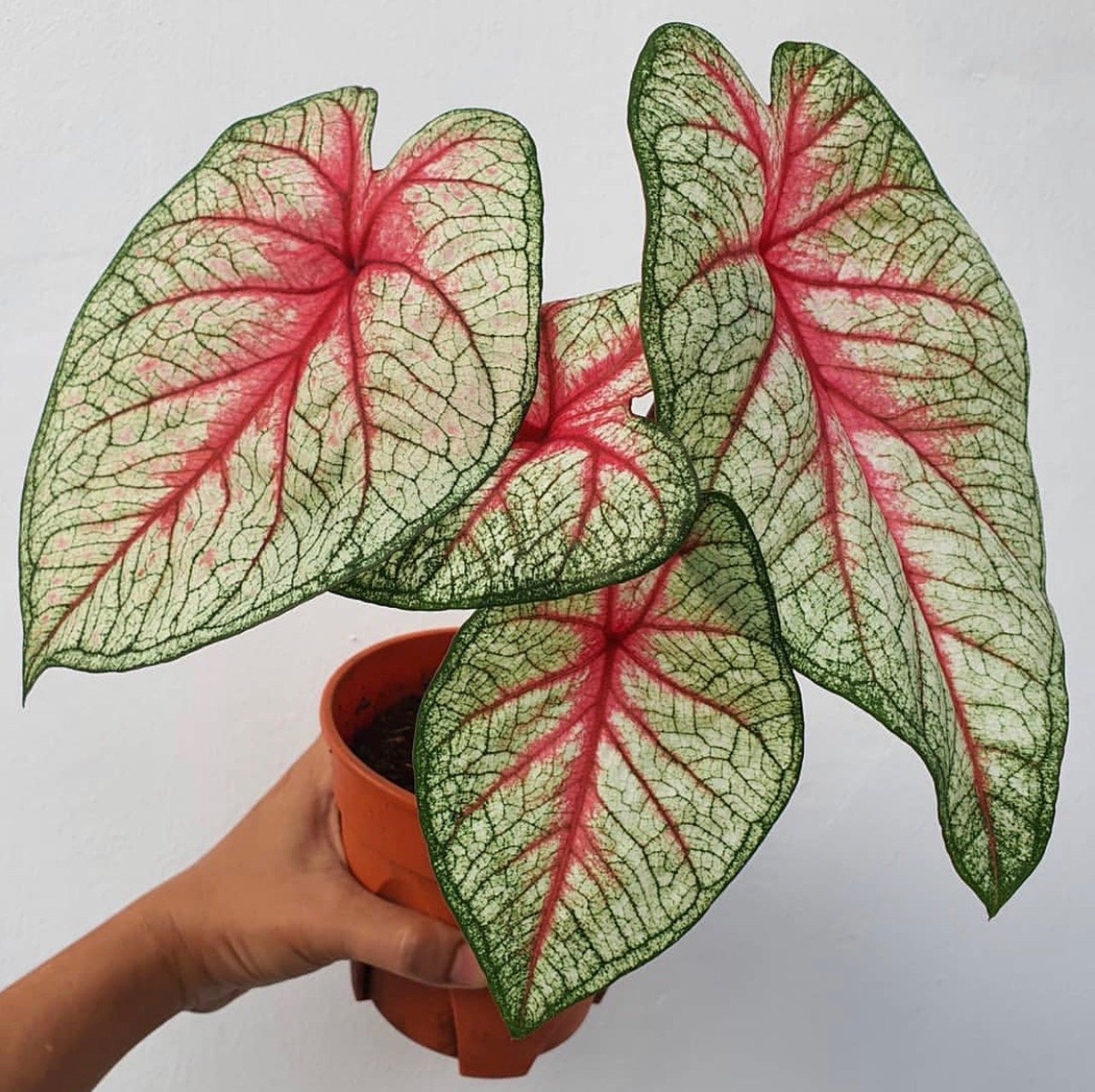 Caladium is a genus of flowering plants consisting of fourteen species and over a thousand cultivars. Despite originating from South America, it has recently been introduced into other tropical locations around the world, including Africa, Asia and northern Australia. Caladium was first described back in 1800 by Étienne Ventenat, during a visit to rainforests of South America. During the southern-tropics dry season (usually March to October), many Caladiums will go dormant by reducing their leaf-count to almost none, in an attempt to avoid severe dehydration. 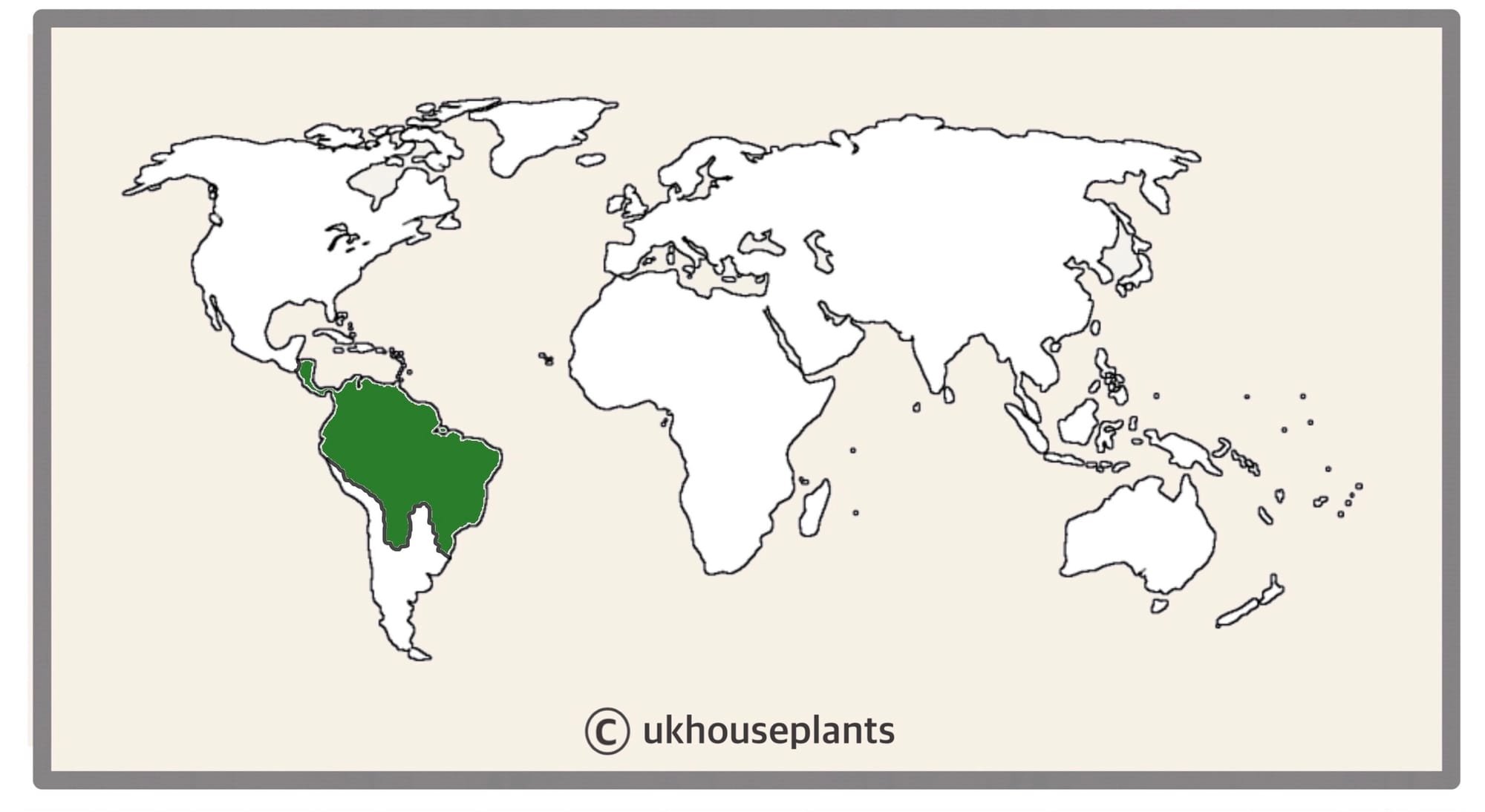 The Distribution of Caladium

10° - 30°C   (50° - 86°F)
H1b  (Hardiness Zone 12)  - Can be grown outdoors during the summer in a sheltered location with temperatures above 12℃  (54℉),  but is fine to remain indoors, too. If you decide to bring this plant outdoors, don't allow it to endure any direct sunlight as it may result in sun-scorch and dehydration. Regularly keep an eye out for pests, especially when re-introducing it back indoors.

Over 0.7m in height and 0.5m in width once they reach maturity. The ultimate height will take between 5 - 10 years to achieve with several new leaves per season. There'll be a fluctuation of the number of leaves throughout the season, with a limited amount during their dormancy period in the height of winter. 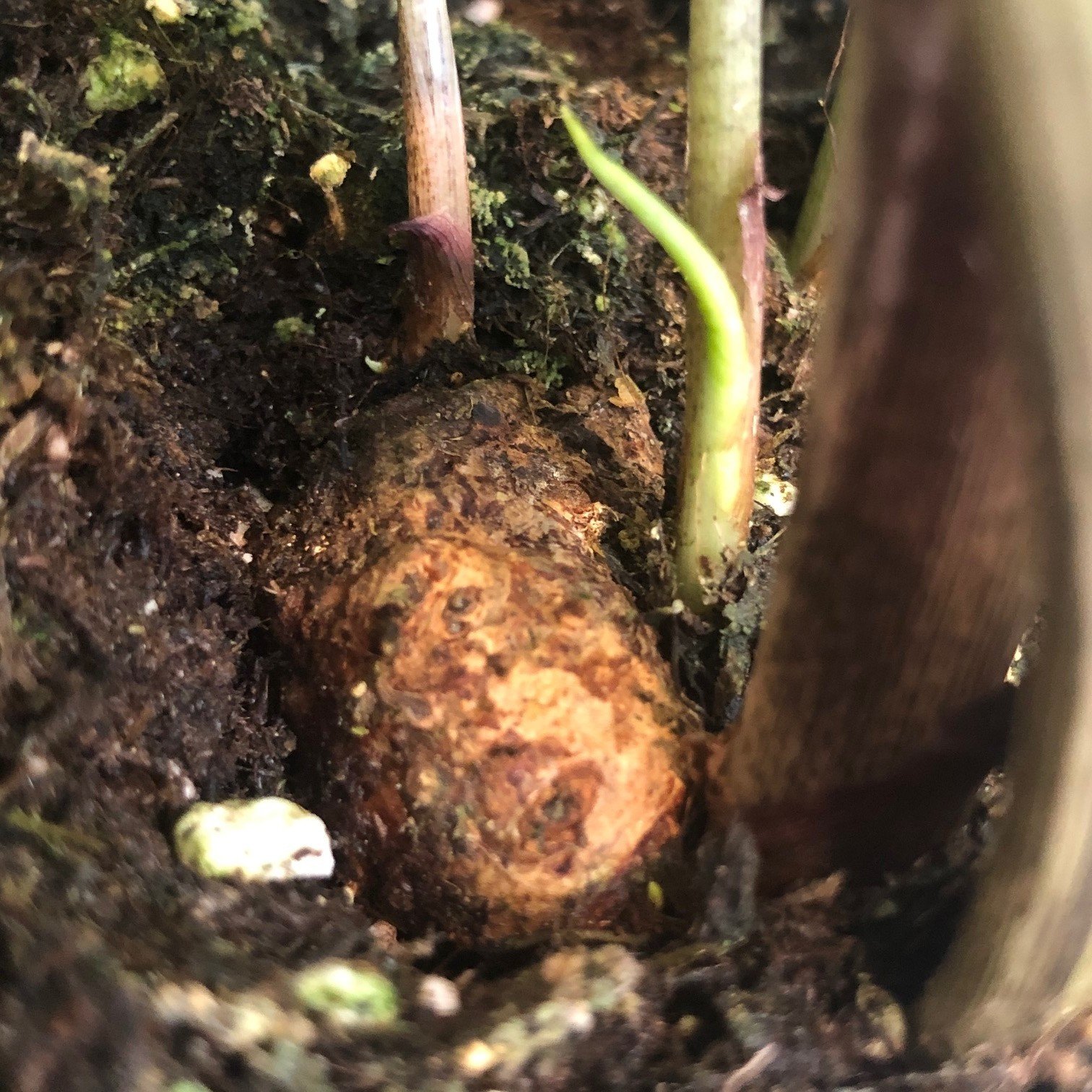 The tuber of a Caladium. These bulb-like modified stems are the storage organ for the genus, where it'll withhold nutrients and moisture, along with the foliar node itself.

Via Seed or Offset Tuber Division.

Tuber Division (Moderate) - Your plant will produce several tuberous offsets (similar to potatoes) that can be separated once they have a sufficient root system and surpass 3cm (1.1 inches) in diameter. Water the soil 24hrs before the main event to reduce the risk of transplant shock - when its dry root systems are over-fingered. Take the plant out of its pot and place your fingers close to the nodal junction between the two tubers - compost may have to be removed for better access. Push the chosen offset downwards until you hear a snap. Separate its foliage and root system away from the mother plant, mentally noting the high risk of damage. Transplant in the appropriate sized pot with a fresh batch of 'houseplant' soil. Maintain evenly moist soil and situate it in a bright, indirect location away from any direct sunlight. After four weeks of solid foliar growth, treat it like a standard specimen, following the care tips above!

As Caladiums are part of the Araceæ family, their blooms aren't showy. Much like a Peace Lily's flower body, their flowers consist of a white or green spathe (the spoon-like shell) with the spadix being the site pollination. Blooms can last up to five days and are usually visible during late spring or early summer around 30cm+ from the soil line; however, achieving a flower is highly unlikely indoors. 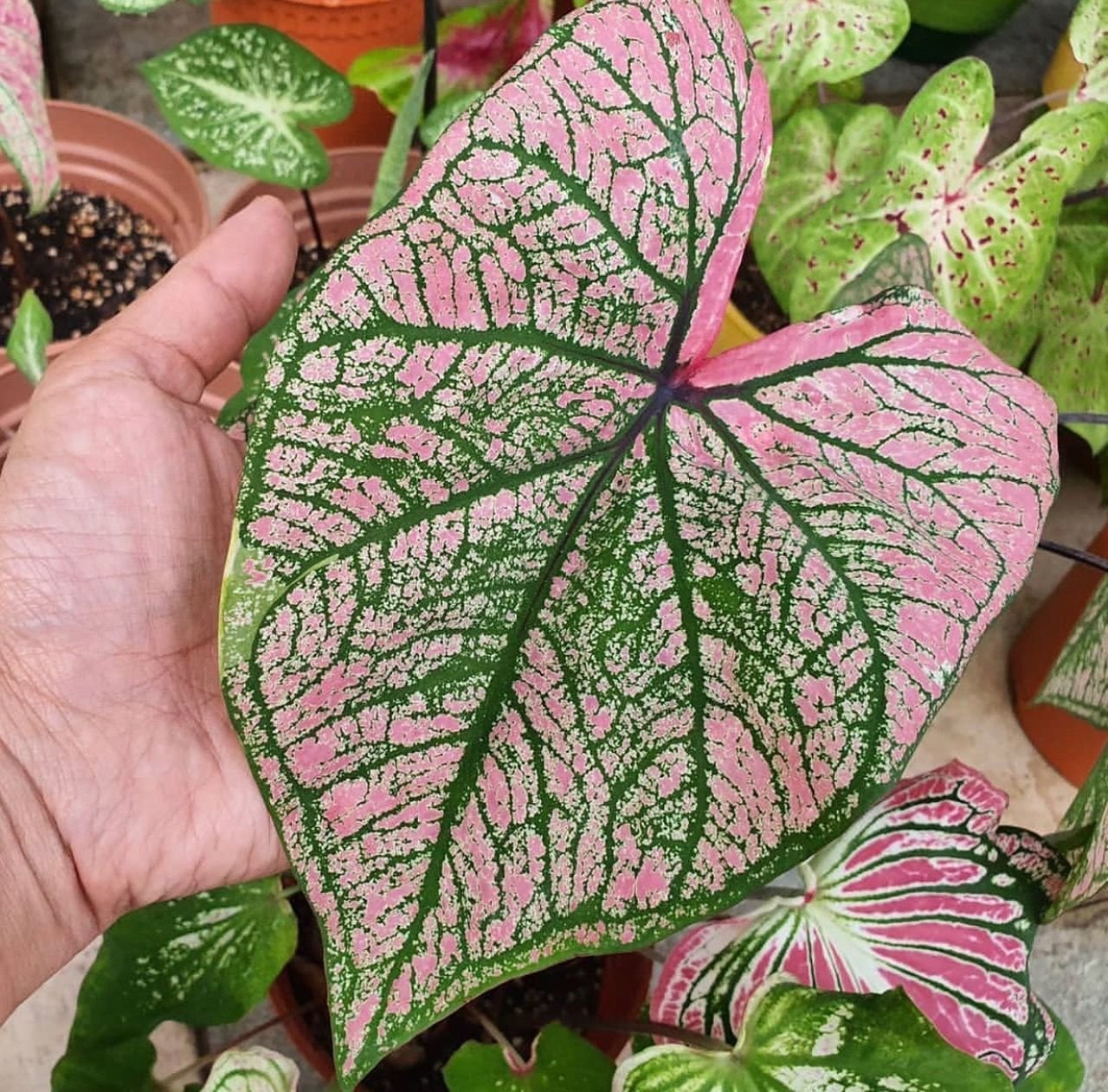 Repot every three years in the spring using a houseplant-labelled compost and the next sized pot with adequate drainage. Hydrate the plant 24hrs before the tinkering with the roots to prevent the risk of transplant shock. For those that are situated in a darker location, add a thin layer of small grit in the pot's base to improve drainage and downplay over-watering. Click here for a detailed step-by-step guide on transplantation, or via this link to learn about repotting with root rot.

Keep an eye out for mealybugs, aphids, spider mite, scale & thrips. Typical diseases associated with this genus are leaf-spot disease, rust, botrytis & root/tuber rot. Click on this link for further information about how to identify and address any of these issues.

By purchasing bare Caladium tubers online, you can bypass the extra fee for its initial cultivation and transportation costs.