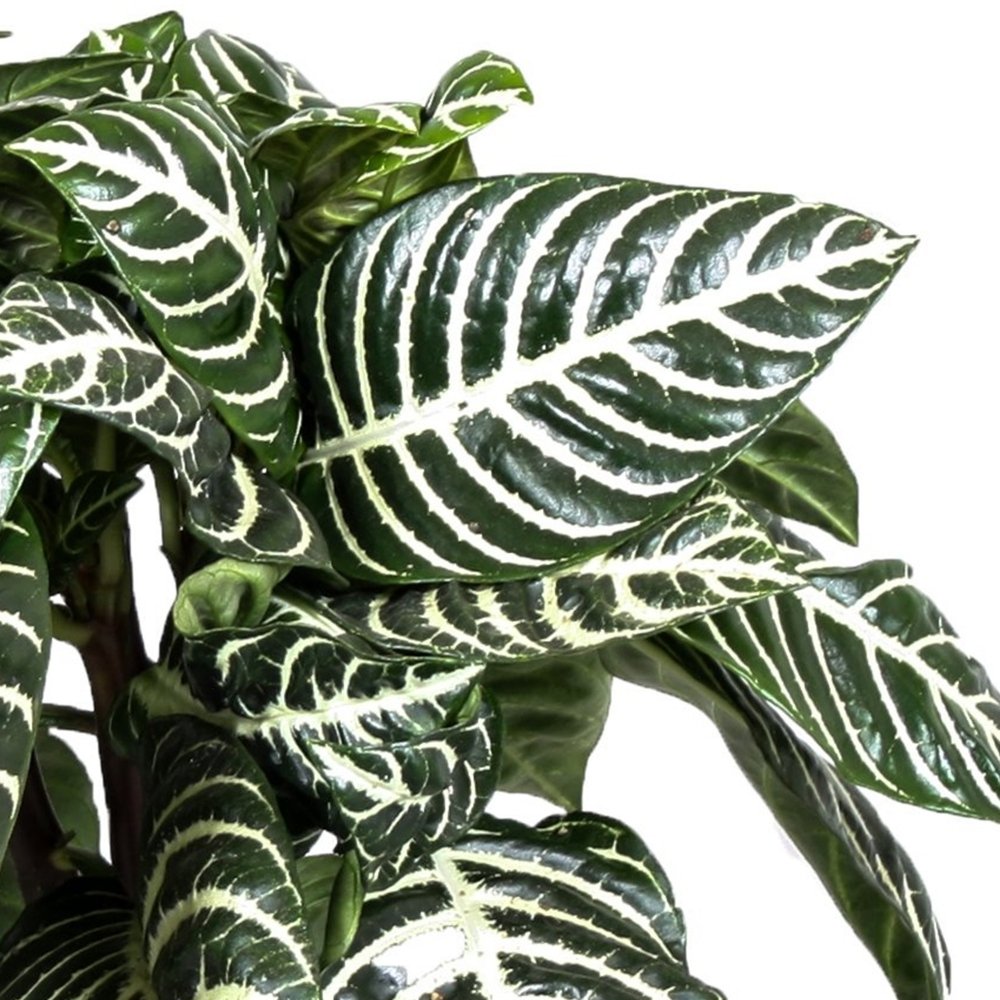 Aphelandra prefer to be sat in medium light with the absence of deep shade. As you'll have to keep the soil relatively moist, the risk of soil mould and over-watering is considerably increased when maintaining too little light.

Once the autumn kicks in, be sure to include an hour or two of direct light per day to get it through the dormancy period, lasting until the following spring. Remember - acute exposure to the sunlight during the spring or summer of more than an hour will negatively affect the plant.

Aphelandra are best kept in reliably moist soil, as inconsistent moisture levels may result in stunted growth and an unhappy plant. Allow the compost's top third to dry out in between waters in the growing period, reducing this further in the autumn and winter. Under-watering symptoms include a shrivelled stem, yellowing leaves, stunted inflorescences, little to no growth and dry, crispy patches forming on the leaf edges. These issues are usually caused by too much light/heat or forgetfulness. Remember, the brighter the location, the more watering you'll need to do. Over-watering symptoms include a weakened or rotten stem, no new growth, yellowing lower leaves and eventual plant death. Click here to learn more about root rot and how to address it!

Create a humidity tray to provide a moist and stable environment for your plant. If the surrounding saturation is too low or the heat too high, its leaf-tips may start to brown over and curl, especially in direct sunlight. Gently hose the foliage down from time to time to hydrate the leaves and keep the dust levels down.

Supplement once a fortnight using a houseplant-labelled fertiliser, reducing this to monthly in the autumn and winter. Try not to under-feed your specimen as its rate of growth and flower lifespan may be hindered. 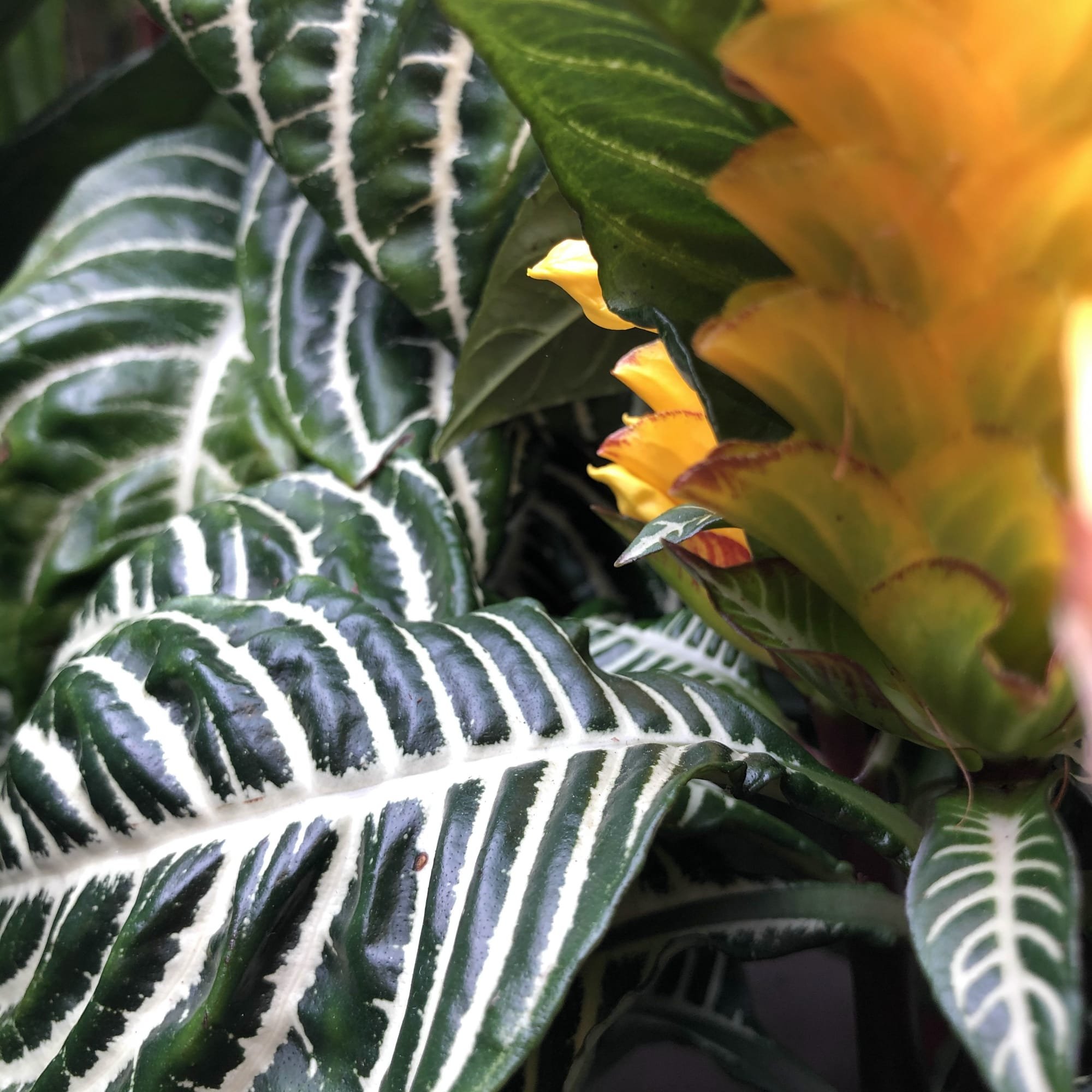 The striking contrast between the flowers and variegations

Aphelandra will naturally flower across the summer months, lasting only a few days. Although the individual inflorescence isn't long-living, its bract that'll house the flowers will stay in colour for many weeks or months. (Have a look at the image below for visual reference).

For those in bloom, keep a reliable and consistent environment with a bright, indirect location with regard waters; never allow the soil to become dry. Follow the care tips provided above until your specimen enters the following autumnal months, before re-reading this section on winter care.

If, however, yours is current flowerless, you must provide a cool autumn and winter period around 15℃ (59℉) to reinforce its dormancy. Keep the roots pot-bound to add further stress onto the specimen, which in turn will significantly heighten the chance of flowering. Blooms will generally appear in the summer, during the active growth season.

N. B. - Each individual stem will only flower once, so if you only have already-flowered foliage, you'll have to wait until the following year for a new offset to appear. New juvenile stems will develop from late winter and could produce a bloom within the next summer if it reaches maturity. The following steps should be taken from early autumn until the end of winter.

Be sure to provide a bright location with little to no direct sunlight. Although the winter rays won't necessarily hurt the plant, be careful not to fall in the trap of sun-scorch and severe dehydration. Avoid deep shade and the use of artificial lighting at night or locations that boast temperatures higher than 18℃ (64℉).

During the autumn and winter, fertilisation should be performed at monthly intervals with a 'houseplant' feed. While the flowers are in development or in bloom, use a Tomato fertiliser to provide fortnightly nourishment of potassium.

This is the most significant step; reduce the temperature down by around 5℃ compared to the summertime or place in a room that's between 14º - 17℃ (57º - 62℉). You'll be at a significant disadvantage if the ambient temperature is kept constant throughout the year, as Aphelandraa will only respond in locations that have daily fluctuations of around 7℃. Never exceed the minimum temperature as it may lead to plant death or yellowed foliage at a bare minimum. If these steps are followed successfully, you could see a show of blooms in the following summer - but remember, dealing with nature may not always provide the results you'd relish. 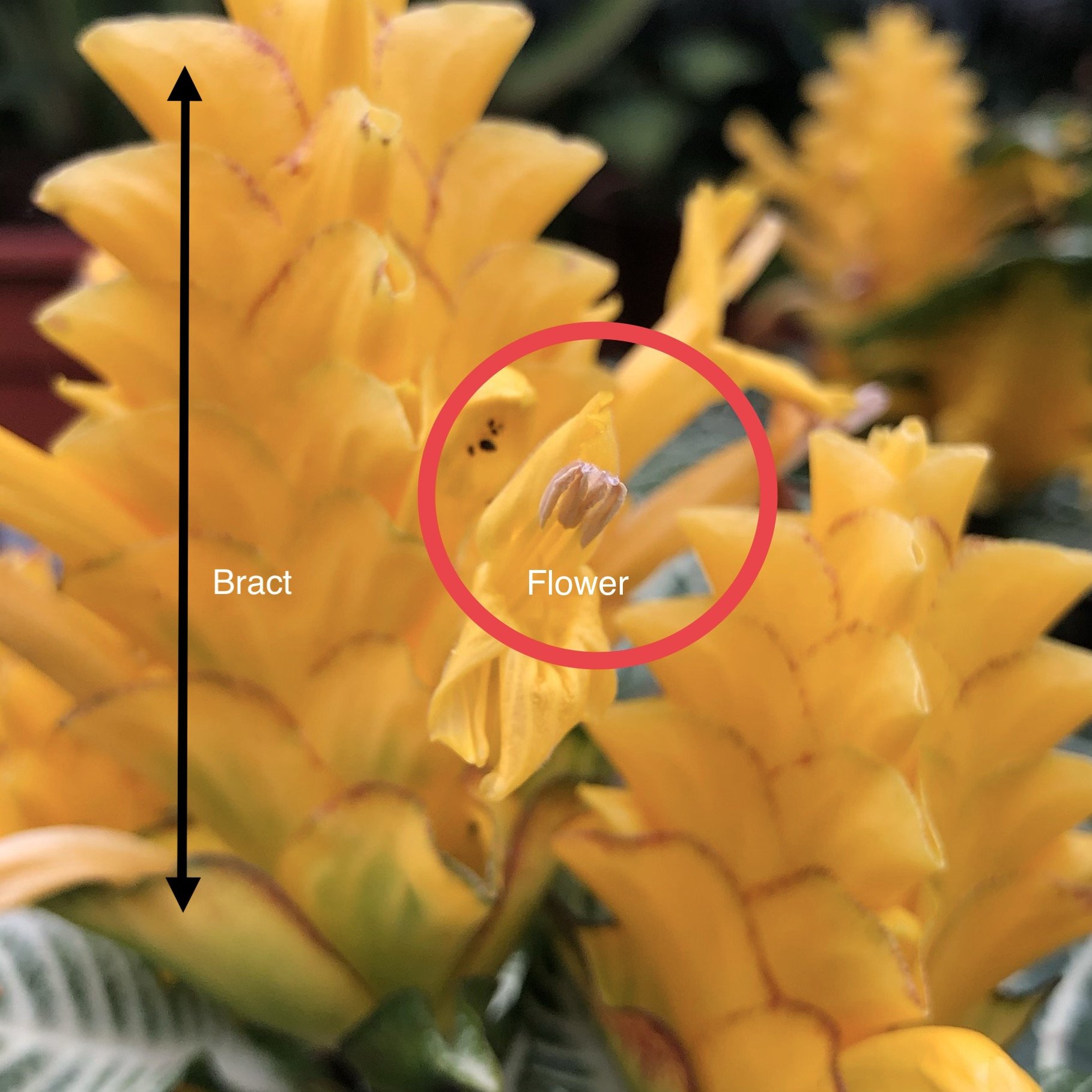 The 'bract' is a modified leaf with the true flower in its axil. In some cases, as shown above, the bract can be much larger than the actual flower, which serves as an advertisement to airborne pollinators.

Curled leaves and brown leaf-edges are the result of too little water and over-exposure to the sun. Aphelandra are best located in bright, indirect settings, and those that haven't acclimatised to the harsh rays will show signs of sun-scorch and environmental shock. A splash of winter sunlight is acceptable as long as the soil moisture is regularly observed, with complete avoidance once summer comes along. 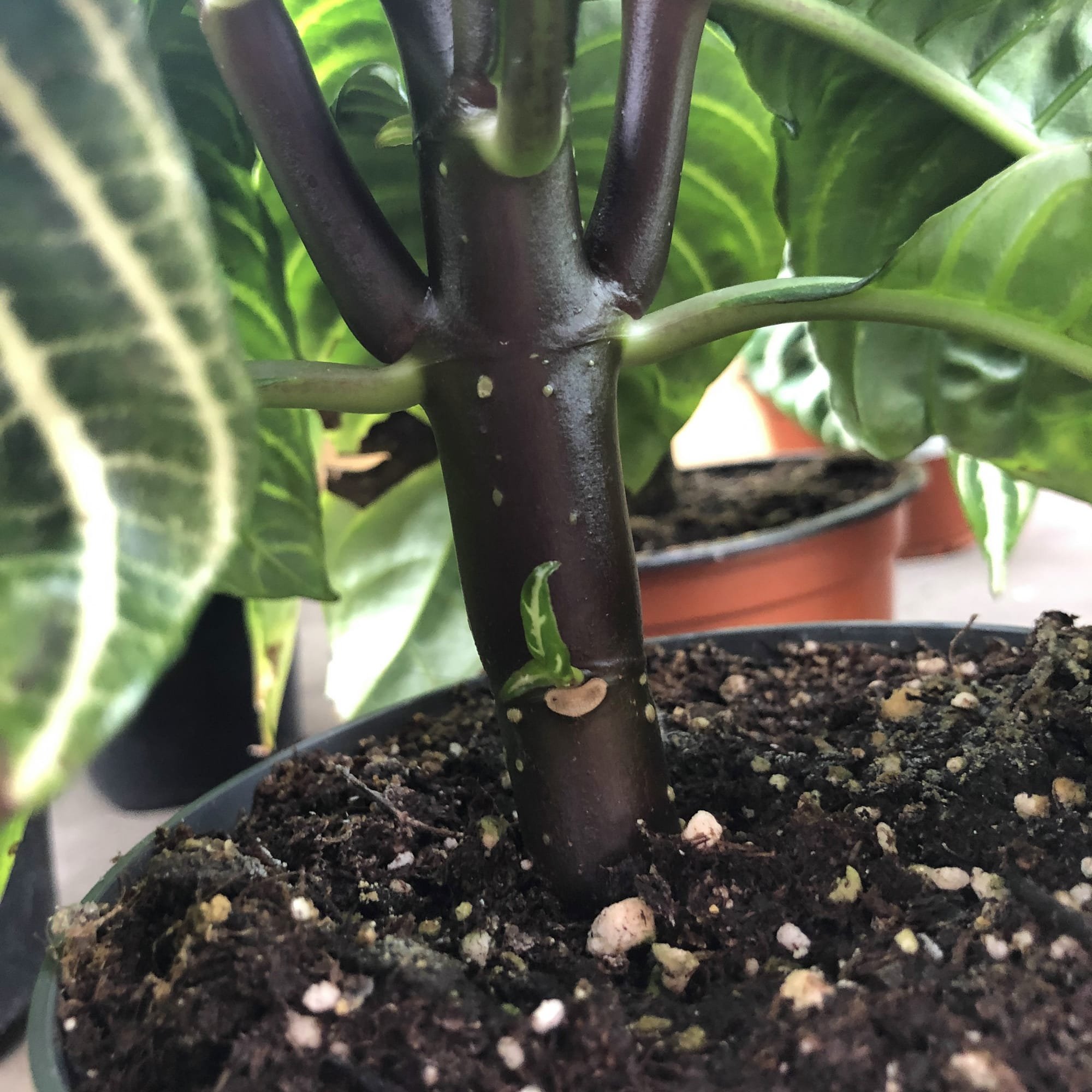 Aphelandra squarrosa has 'opposite' growth, where the two leaves either side of the node grow simultaneously, a similar trait found in Acers.

Aphelandra squarrosa was formally classified in 1847 by German botanist, Christian Nees von Esenbeck, during a voyage to South America. At one stage though, it was placed under the genus of Ruellia, for twenty years before finally resting in its current name. Aphelandra refers to the single-celled anthers of the flower, whereas squarrosa describes the square-like positioning of the bracts when fully developed. 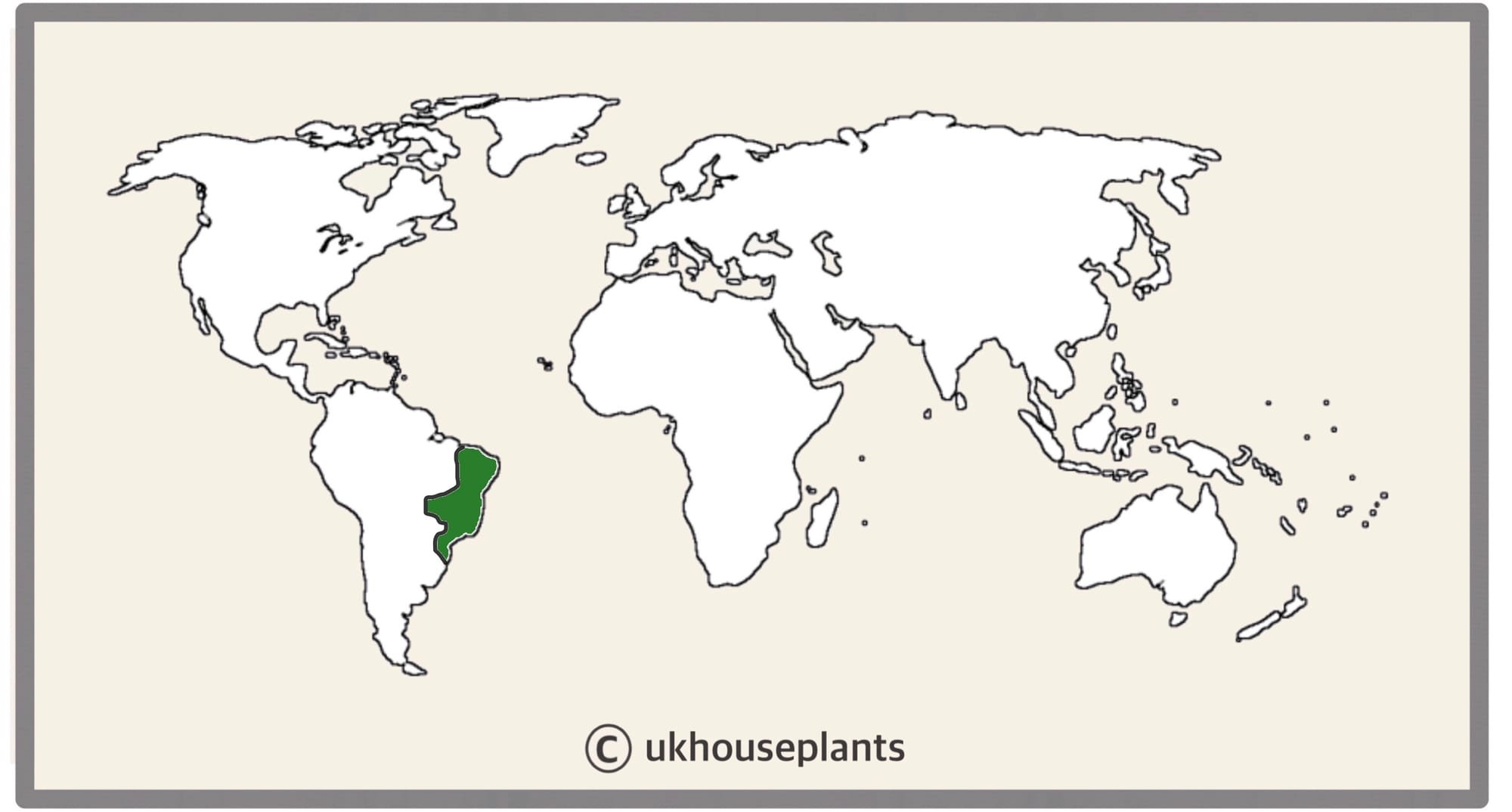 The Distribution of Aphelandra squarrosa.

14° - 27℃   (57° - 80℉)
H1b  (Hardiness Zone 12)  - Can be grown outdoors during the spring and summer in a sheltered location whilst nighttime temperatures are above 12℃  (54℉),  but is fine to remain indoors, too. If you decide to bring this plant outdoors, don't allow it to endure more than an hour of direct sunlight a day as it may result in sun-scorch. Regularly keep an eye out for pests, especially when re-introducing it back indoors.

The overall size can be up to 1m (3ft) in height and 0.5m (2ft) in width. The ultimate size will take between 2 - 5 years to achieve when repotted biannually, with several new leaves unfurling per annum.

Via Seed or Stem Tip Cuttings.

Stem Tip Cuttings (Moderate) - This method is an easy way to duplicate the original plant. Stems that are at least 10cm (4 inches) in height and part of an established plant are most successful. To avoid making a mess of the serrations, use a clean pair of scissors and cut 8cm down from the stem's end, dipping the wound in water and then into rooting hormone to speed the propagation. Rooting can take in the range of between two to eight weeks, depending on environmental factors and the cutting's quality. We recommend using a Cactus & Succulent-labelled potting mix, with a pot that has adequate drainage to avert the risk of blackleg. Provide a bright, warm setting of around 18℃ (64℉) with relatively moist soil, but be sure to allow the top half to dry out in between waters. You'll know if propagation is successful as the leaves will stay green and firm, along with small roots developing from the callous (dried wound). New foliar growth will emerge from the nodes after around twelve weeks, but it may take longer if the conditions aren't optimal. After a month of solid new foliar growth, transplant into a slightly bigger pot and treat it like a mature specimen with the care tips provided above.

As mentioned in 'Dormancy Care & Achieving Flowers', the actual flower will only last a few days; it's the yellow bracts which will provide the colour for several weeks. Swipe up to learn more about their flowers, and how to achieve a sensation bloom!

Repot every two or three years in spring using a 'Houseplant' labelled potting mix and the next sized pot with adequate drainage. Aphelandra are far better potbound for several years due to the heightened risk of root rot and repotting-issues (like transplant shock) - so only repot if you feel it's wholly necessary.

Hydrate the plant 24hrs before the tinkering with the roots to prevent the risk of transplant shock. For those situated in a darker location, introduce extra amounts of perlite and grit into the lower portion of the new soil to downplay over-watering risks. Click here for a detailed step-by-step guide on transplantation, or via this link to learn about repotting with root rot.