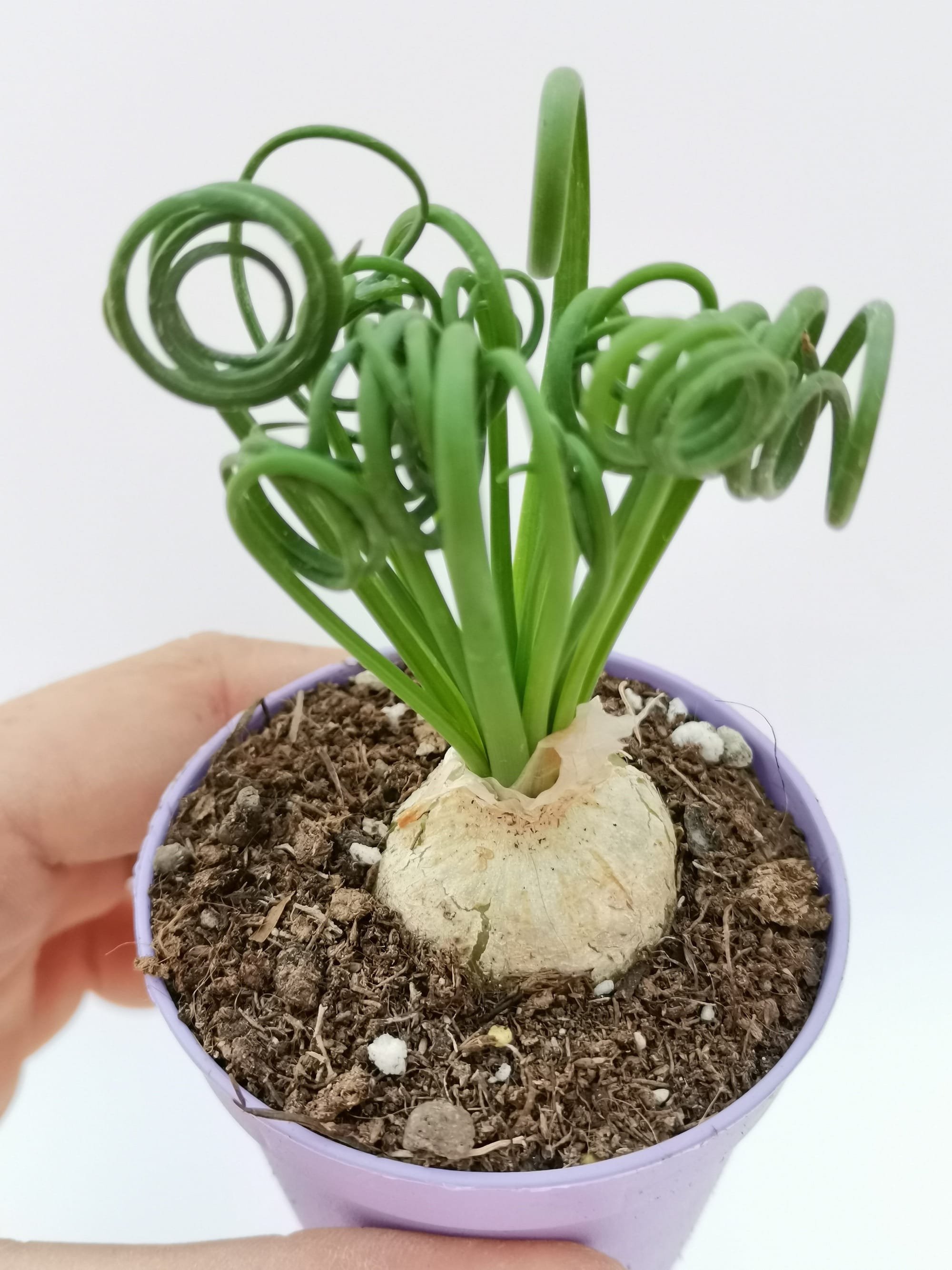 An hour or two of direct sunlight is best for quality growth. Never situate your Corkscrew Albuca in a dark setting as the chance of bacterial diseases, like basal collapse, are far too likely for such a beautiful specimen. The frequency of irrigations solely rely on the amount of sunlight received each day; those situated in slightly darker locations must be far less than with those in strong light. We'd recommend situating yours in a north, east or west-facing window, or in a semi-shaded conservatory or porch for best results. During the height of winter, you're also allowed to place it in a south-facing window, but always be cautious of dehydration from the sunlight.

Allow the top third of the soil to dry out in between waters, reducing this further in the autumn and winter. In some cases, your Corkscrew Albuca may lose its foliage from late autumn onwards, which is normal behaviour for specimens at that time of year. When this occurs, reduce watering to once every two or three weeks; scroll down to 'Dormancy Care & Annual Flowers' for more information on what to do! Under-watering symptoms include a weakened stem accompanied by a loss of flowers, stunted growth and the greying or yellowing of leaves - these issues are commonly down to forgetfulness, or too much heat or sunlight. Over-watering symptoms include yellowing of leaves, wilting, basal collapse, and plant death; these issues are commonly due to an area that's too dark, excess moisture in the soil, a too water-retentive compost or water-logging.

Average room humidity is more than enough to occupy a Corkscrew Albuca, as too high humidity and poor air circulation will result in powdery mildew. Do not mist the flowers as this will cause botrytis petal blight that can spread quickly if not dealt with accordingly.

Autumn & Winter - While the plant is growing or producing flowers, feed using a 'Houseplant' labelled fertiliser every four waters. If it's important to keep the soil relatively fertile, as this will increase the likelihood of a flower development in the tail end of winter!

Spring & Summer - This is their dormancy period. During this time, you won't need to fertilise the plant until it begins to show signs of new growth in the following autumn. 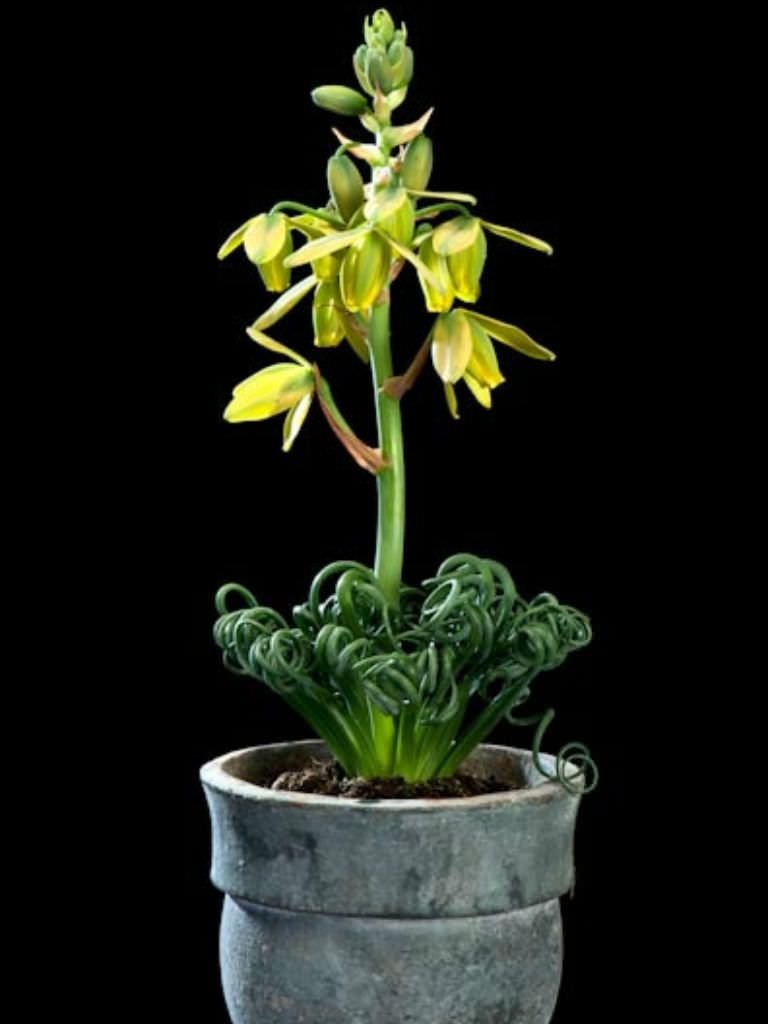 Your Corkscrew Albuca can produce a beautiful show of flowers from mid-winter onwards. This is usually the start of the plant's decline (in time for its dormancy), before shedding its leaves until the new growing season in autumn!

Unlike most houseplants, which go through a form of dormancy period in the autumn and winter, Corkscrew Albucas will spring into life - erupting in new curly foliage and a show of beautiful yellow flowers. Although the exact reason is unknown, it could be to avoid the summer heat of the South African hills, resulting in dehydration and even death. The other recognised reason could be to do with pollination of a certain bird or insect, which too has a spurt of activity in the cooler, darker days of winter.

Shortly after flowering, its foliage will begin to yellow and die off in the late winter (sometimes early spring). Allow the leaves to shed naturally before placing the potted bulb in a dark location that provides low humidity and temperatures around 12°C (54°F) for a couple of months. Water sparingly every month or so, to ensure the bulb is just 'ticking over'. Once foliage starts to re-emerge in the late summer, weakly fertilise the plant using a 'Houseplant' labelled feed when watering it. Increase the number of waters per week and relocate the specimen in a bright location with little to no direct sunlight so that it can acclimate to the new surrounding. Keep the soil slightly moist, allowing the top third to dry in between waters.

N. B. - If your specimen is still holding its leaves, try not to force it into dormancy. Allowing the plant to take control of the situation will enable it to photosynthesise for longer, thus giving it more energy to take through the dormancy. 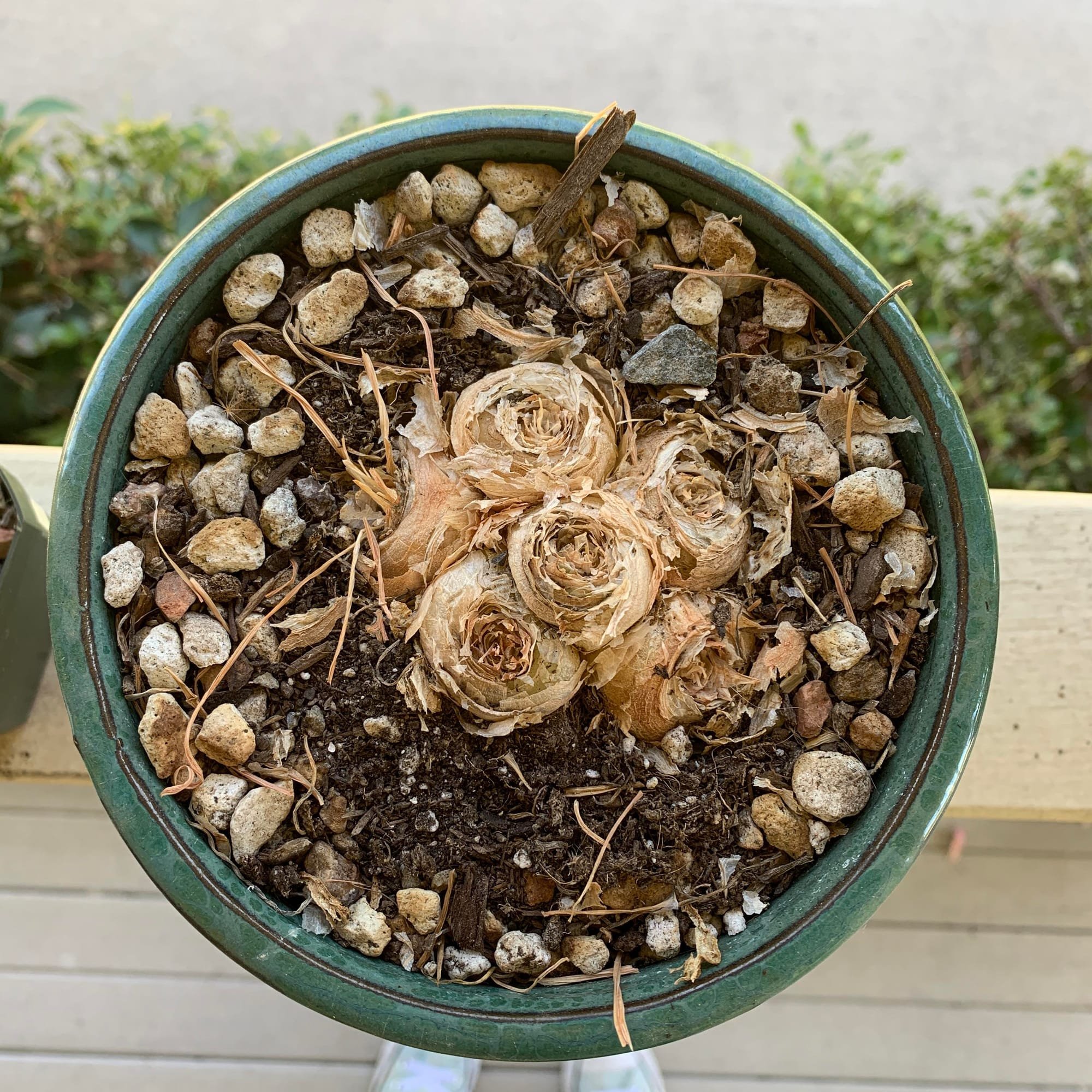 This is a perfect illustration of what your plant should look like when in its dormancy. Keep this pot in a cool, dark area until new growth emerges in the autumn. You don't need to water, fertilise or repot it during this resting period. Copyright: Reddit.

Root or bulb rot is a common issue among specimens sat in too dark environments with prolonged soil moisture. Symptoms include rapidly yellowing leaves, mouldy soil, stunted growth and a rotten collapsed base. Take the plant out of the pot and inspect health below the compost line. If the roots sport a yellow tinge, you're good to go, but those that are brown and mushy must be addressed immediately. In most cases, this will spell the end of its life and therefore must be discarded; this is sometimes a normal phenomenon for a recently-flowered Corkscrew Albuca, so don't be too disheartened.

If your Corkscrew Albuca develops basal collapse, it will spell the end of its life. The bulb, which is located below the soil line and acts like a modified stem, is the lifeline for a successful specimen, so any issues of rot will kill it outright. If yours has problems of this, be sure to take the plant out of the pot and inspect its roots. Prune away any rotten areas and check its base for a softened profile. Remove any individual plants that have a rotten bottom and repot the healthy specimens in a fresh batch of 'Cactus & Succulent' compost. Provide a brighter location and reduce the number of waters slightly to avoid further rot. Discard the plant if there is no sign of health below the soil line.

A lack of flowers is caused by an insufficient dormancy period, where the temperatures are kept more or less the same over the year. Reduce the temperature by a couple of degrees over the spring and summer months, along with fewer irrigations to ensure a well-spent dormancy. 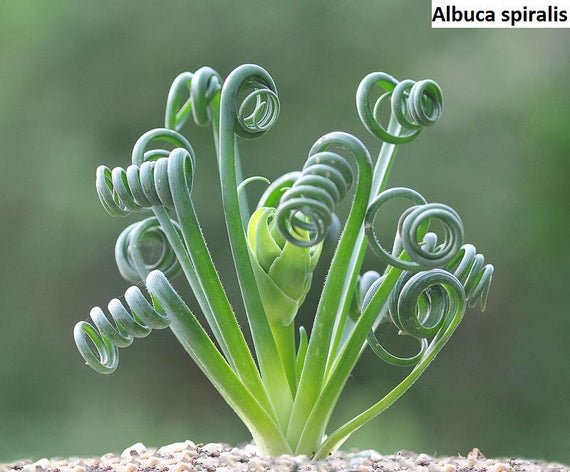 Can you spot the developing flower stalk from its centre? Giving your plant a cool, dry resting period in the spring and summer will dramatically increase the chances of flowers!

The genus, Albuca, was first penned by Carl Linnaeus in the 1750s, using the Latin words for 'white' that refer to the ivory white flowers of many species. The species, A. spiralis (Corkscrew Albuca) was first penned by Carolus Linnaeus the Younger in 1782, using the Latin word for 'spiral' in reference to the unusual curvature of its foliage. The species has natural distributions across the Western Cape of South Africa. 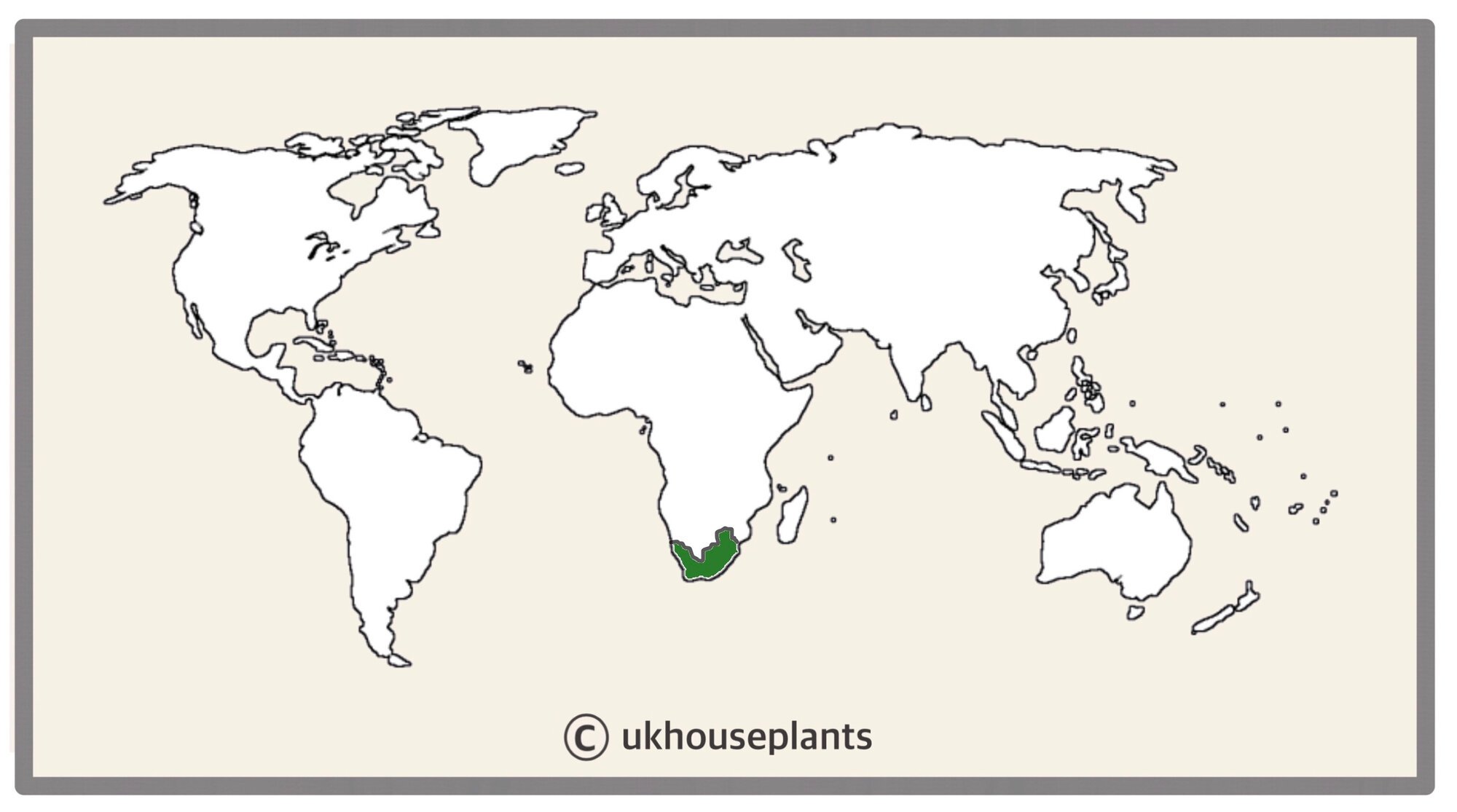 The Distribution of Albuca spiralis.

8° - 24°C  (46° - 75°F).
H1c  (Hardiness Zone 11)  - Can be grown outdoors during the summer in a sheltered location with temperatures above 10℃  (50℉),  but is fine to remain indoors, too. If you decide to bring this plant outdoors, don't allow it to endure any direct sunlight as it may result in sun-scorch and dehydration. Regularly keep an eye out for pests, especially when re-introducing it back indoors.

Bulb - Can form a 'clump' of connected bulbs over time, reaching a cumulative width of 30cm.
Individual Leaves - Up to 20cm in length.

As mentioned in 'Dormancy Care & Annual Flowers', allowing your specimen to shed its leaves in early spring is critical for its success in the following year.

Offset Division (Pups) (Easy) - Separating the bulbed offsets into their own pot will not only expand your plant collection, but it'll also slow the process of becoming pot bound. The best time to divide is during the end of summer, with the pup's bulb surpass 5cm in diameter. Gently brush away some of the soil to gain better access to the bulb's base, where its roots will be housed. While using a clean pair of secateurs or scissors, cut the cord with at least two root strands attached to its base. Set the bulb halfway into a 'Cactus & Succulent' labelled potting mix and the appropriate-sized pot. The ideal location would provide bright, indirect light and temperatures around 15℃  (59℉) to ease it out of its resting period. Maintain relatively moist soil, allowing the top third to dry out in between hydrations. After the first leaf matures, you'll be able to treat it like a matured specimen by using the care tips above!

Corkscrew Albucas will bloom in the late winter, producing vanilla-scented flowers along a thick upright shaft. The individual flower will last for around a week, with the overall show spanning several weeks. A second, smaller flower spike may develop shortly after the demise of the previous, lasting a few days less than its larger counterpart.

Once your specimen finished flowering, the likelihood is that it'll begin shedding its leaves for dormancy. Scroll up to 'Dormancy Care & Annual Flowers' to learn more about this critical period.

For the first two or three years, you won't need to repot the plant as pot-bound roots are more likely to stimulate a show of blooms. After the second year's dormancy period (end of the second year's summer), repot the specimen in the next-sized pot with adequate drainage, using a 'Cactus & Succulent' potting-mix.

Keep an eye out for mealybugs, aphids, spider mites & root mealybugs that'll locate themselves in the cubbyholes and undersides of the leaves, with the exception of the latter in soil. Common diseases associated with Corkscrew Albuca are root rot, leaf-spot disease, botrytis, rust, pythium rot, powdery mildew & southern blight - click here to learn more about these issues.