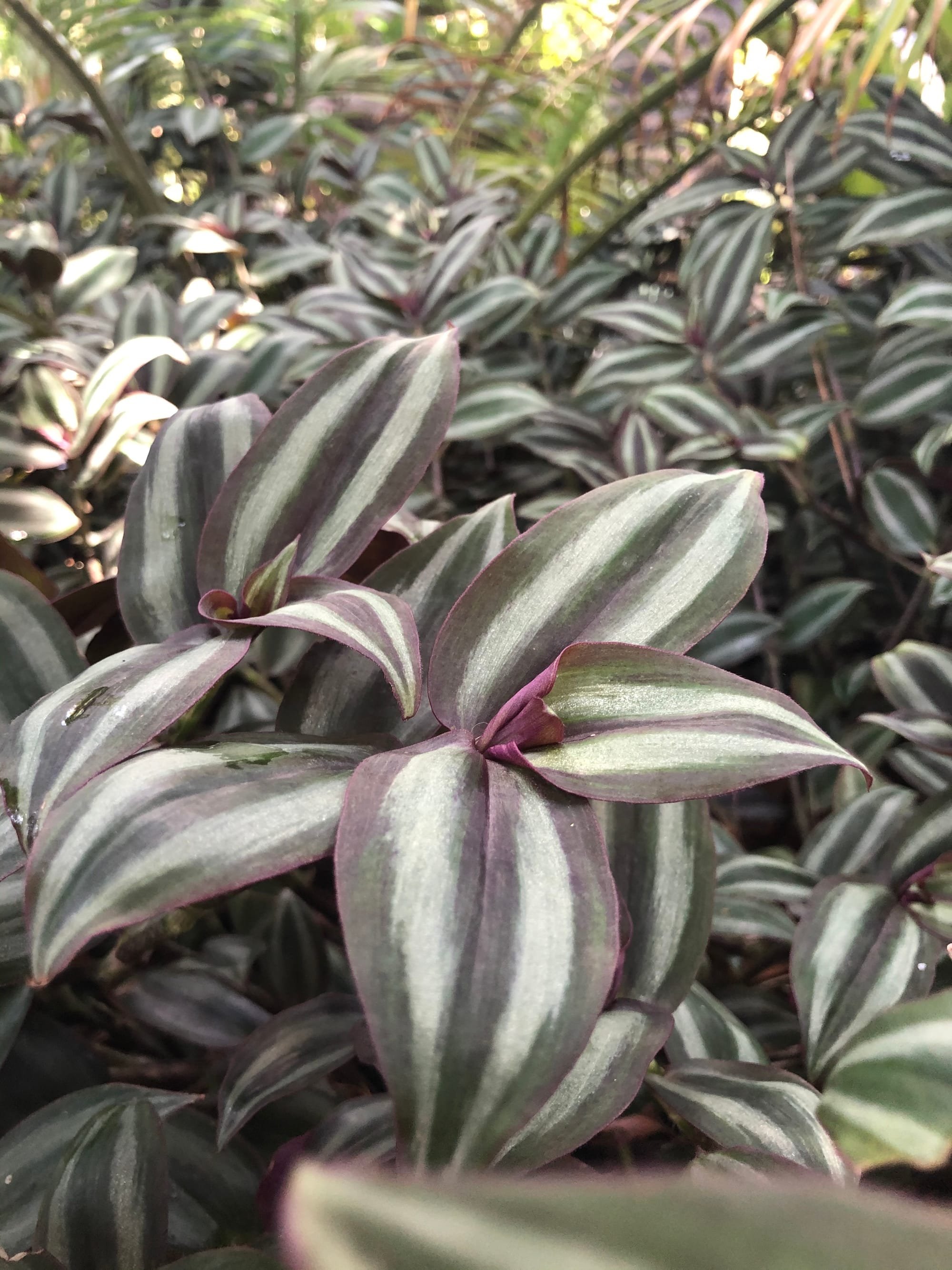 Tradescantia craves moist soil. Once the pot begins to feel light when lifted, it's time for another water. Although pouring water directly through the foliage is acceptable if situated in a sunny location, irrigate using the bottom-up method to be extra sure. Place the pot on a saucer of water (25% submerged) until thorough absorption to provide deep hydration. Wetting the foliage every time you come to hydrate the plant will allow excess moisture to settle, causing the leaves to yellow and rot away. Under-watering symptoms include crispy/curling leaves, a grey, washed-out appearance, yellowing leaves and a lack of new growth. These issues are commonly down to either too much heat/light forgetfulness. Dehydration is the number one issue among growers, so always keep an eye out for drying soil. Over-watering symptoms, on the other hand, include yellowing lower leaves, little to no growth and a rotting stem or leaves. Never allow a Tradescantia to endure long periods of soggy soil or a dark location as both will significantly increase the chance of over-watering and death. Finally, if you water your specimen from the top (over its foliage into the soil), be sure to blow the excess moisture from the leaves' cubbyholes to avert the risk of rotten foliage.

Average humidity found in the home is more than enough to occupy a Tradescantia. If the leaf-tips begin to brown over, it could be a sign of too low humidity; either finely mist the foliage weekly or introduce a humidity tray to keep life happy. 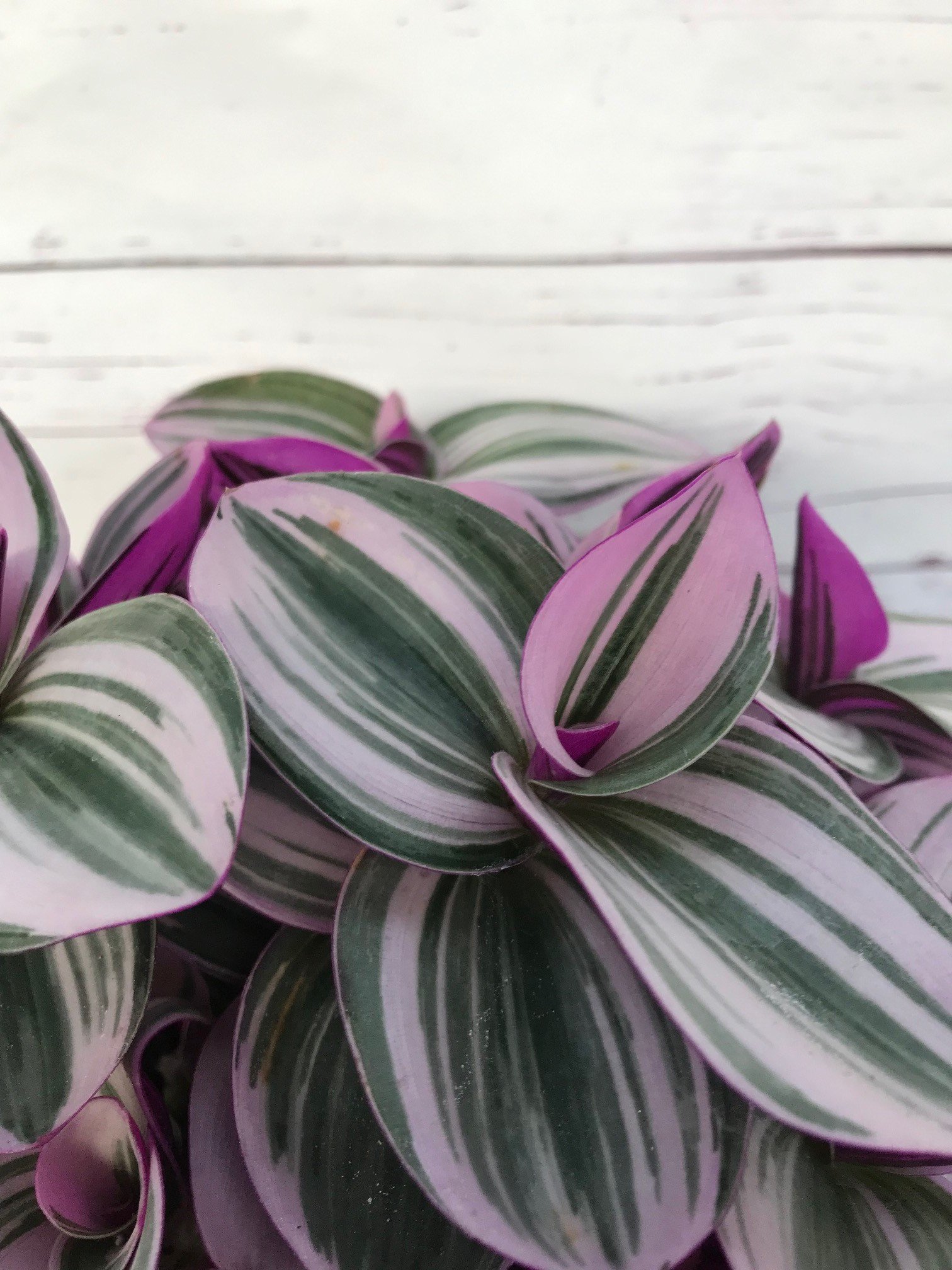 Tradescantia nanouk is by far the most drought-tolerable and beautiful within the genus.

Under-watering is the biggest issue. Typical signs of this include wilting, sunken and yellowed leaves and stunted growth. If the plant is in direct sunlight, relocate it to a slightly shadier area. Increase the number of waters, as Tradescantia tend to grow along moist forest floors that rarely promote droughts. As long as you keep an eye out for drying soil, success is inevitable.
Those situated in direct sunlight or within three metres of a radiator are most likely to suffer from this issue. 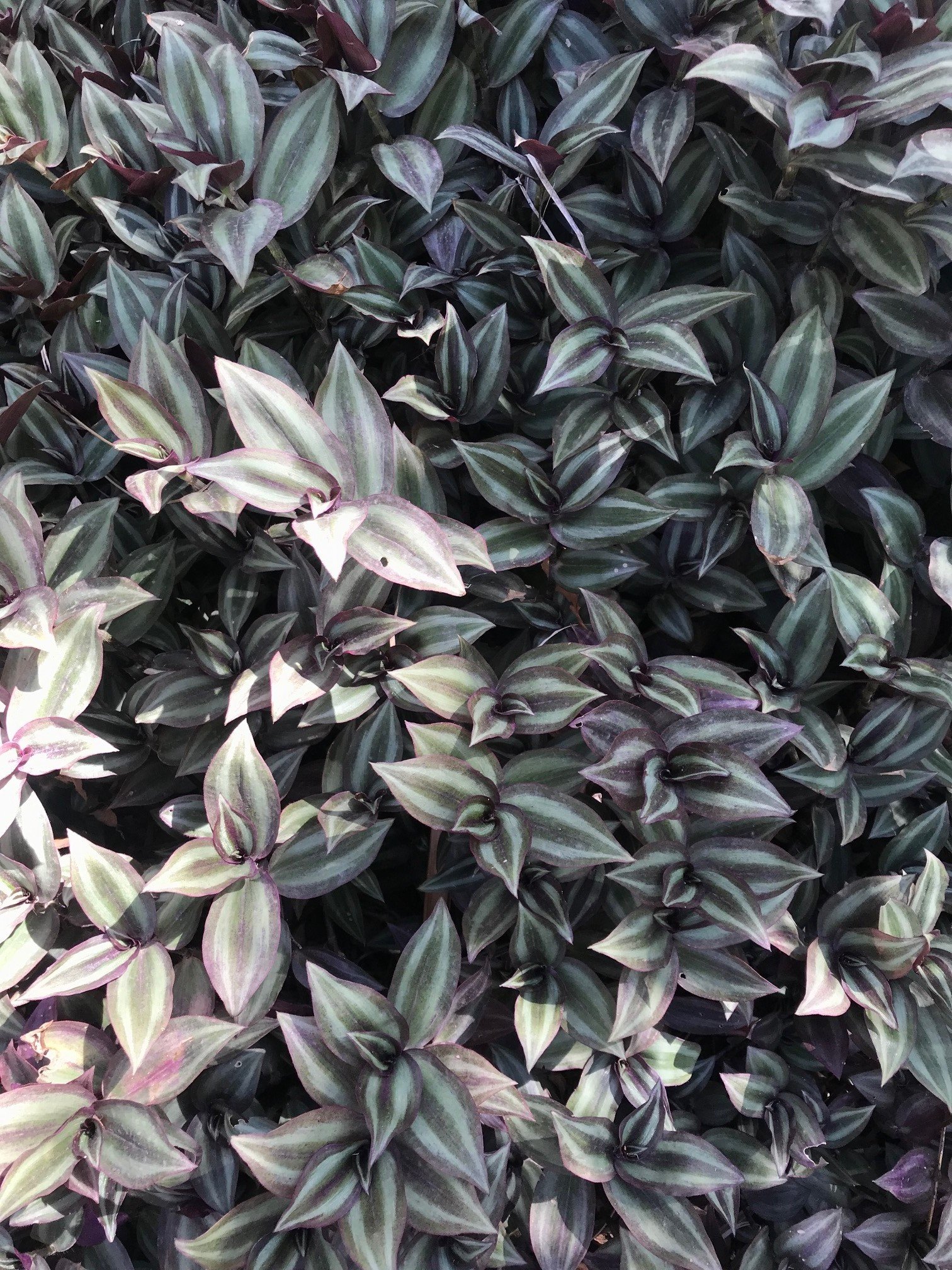 Tradescantia zebrina is a great choice for ground-cover in both large plant pots and in the garden (above 10°C, 50°F).

There are over seventy-five species of Tradescantia that originate right across the Americas. The genus was first described in the 1750s by Carl Linnaeus, who named it in honour of the 17th century English father and son due of John Tradescant Snr. and John Tradescant Jnr. The latter went on three voyages to America, being of the first to bring live specimens of Tradescantia back to the UK in 1629. The most popular species, T. fluminensis, comes from the Latin word for 'rivers' which refers to their natural habitats along riverbeds. 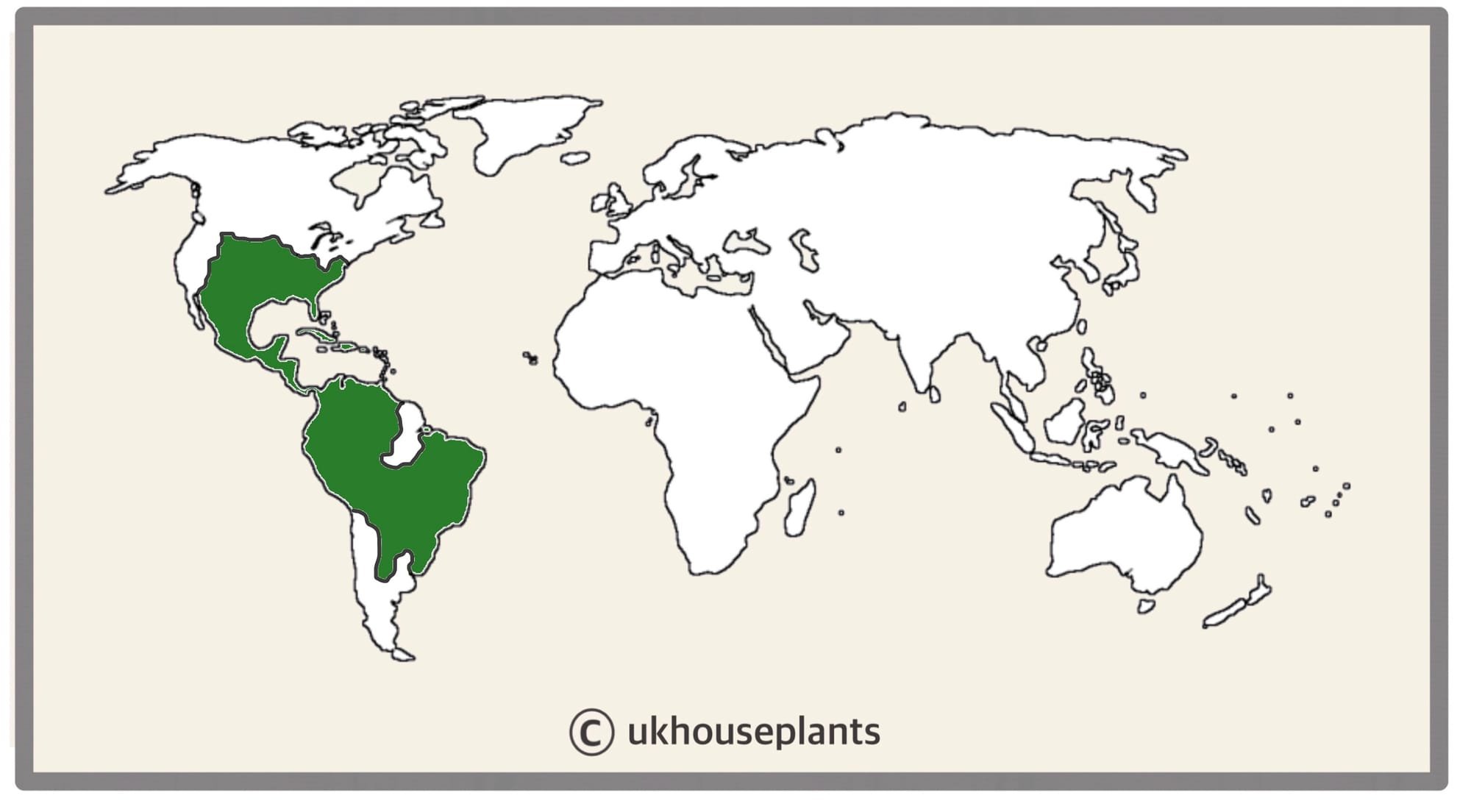 The Distribution of Tradescantia.

10° - 30°C   (50° - 86°F)
H1b - can be grown outdoors in the summer whilst the nighttime temperatures are above 10°C. If you decide to bring this houseplant outdoors, do not allow it to endure more than an hour of direct sunlight a day as this will burn the leaves. Regularly keep an eye out for Aphids, especially when re-introducing it back into the home.

Up to 3m in length and width, when given enough space. The ultimate height will take between 3 - 6 years to achieve. The growth rate is rapid - some cases can see specimens grow up to 50cm per year!

Tradescantia will readily flower in the summer if its previous dormancy period has been served well. Small, delicate flowers will develop at the vines' terminals that can last up to several weeks. The quality of its blooms largely relies on the quality of the dormancy period served in the previous winter. 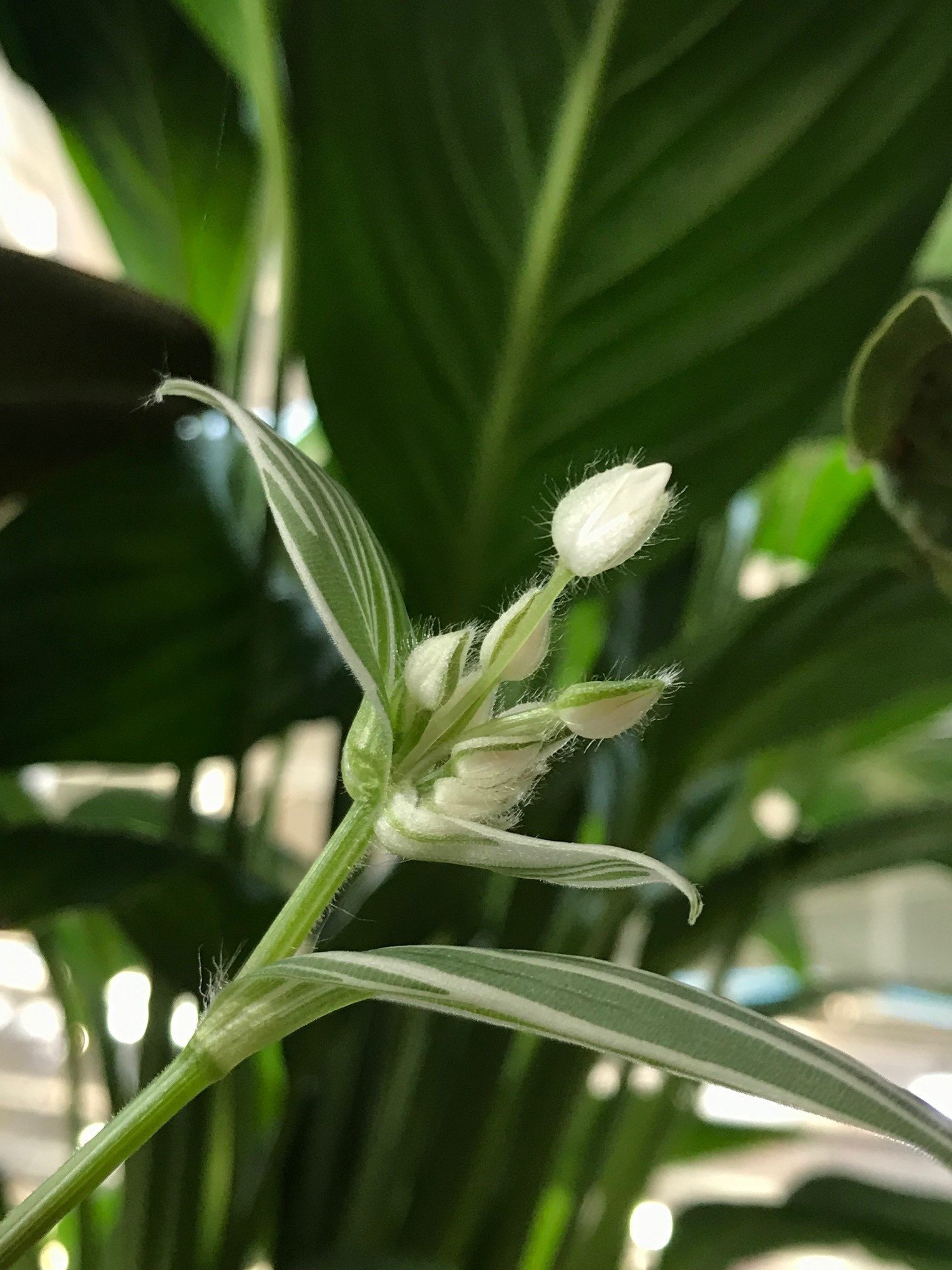 Tradescantia albiflora
T. albiflora - Flowers during the spring or summer, producing white clusters of flowers along the stem.

T. virginiana - Deep-blue flowers will develop along the shafts of the plant in the spring or summer, lasting up to two weeks.

T. zebrina - Dark-pink or purple blooms will develop periodically throughout the year.

Repot every three years in spring using a 'Houseplant' labelled compost and the next sized pot with adequate drainage. Tradescantia are far better being potbound for several years due to the heightened risk of root rot and repotting-issues (like transplant shock), so only repot if you feel it's wholly necessary - restricted root growth will also increase the chance of blooms, too.