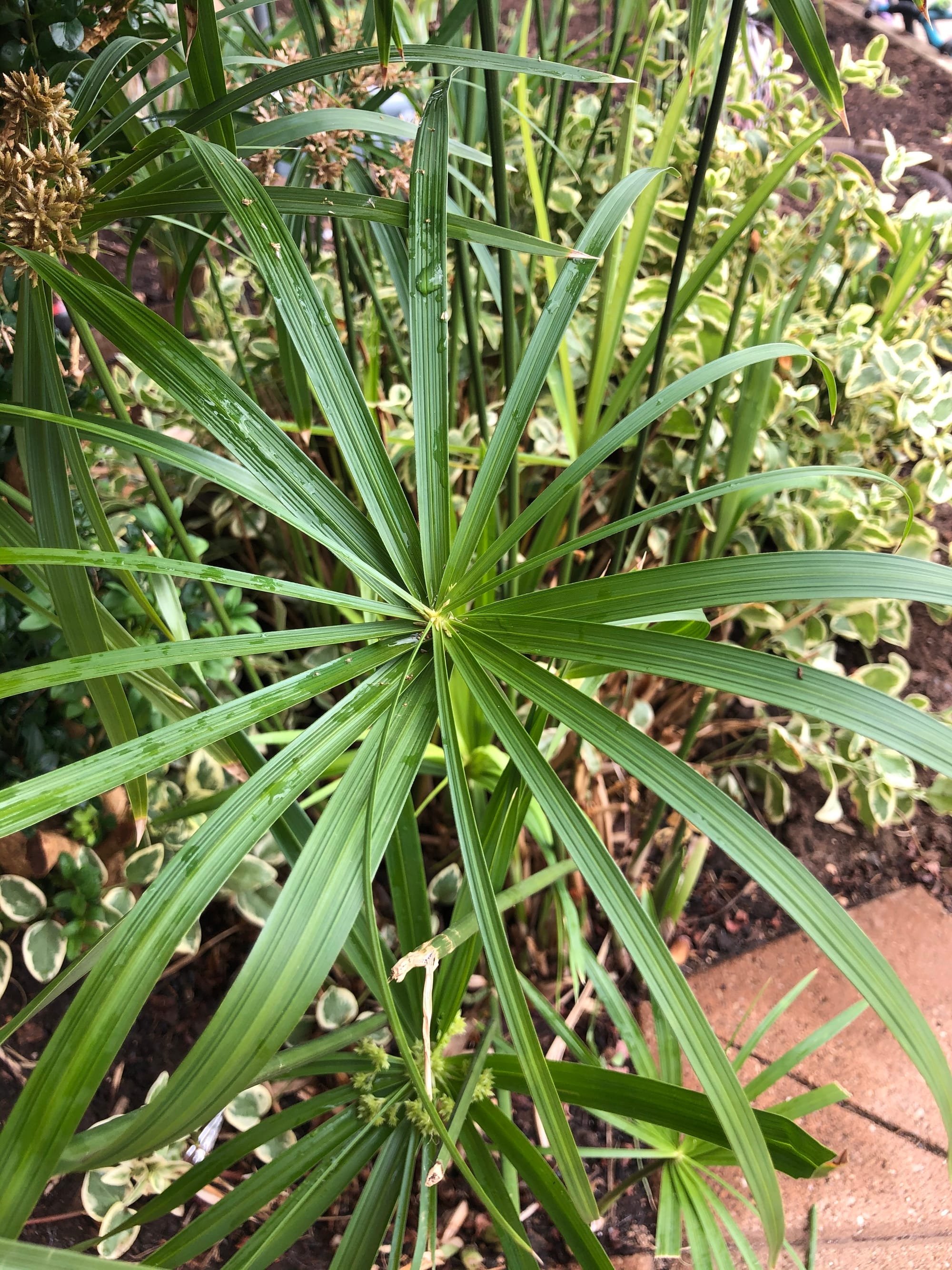 Situate your Papyrus in a relatively bright location that offers several hours of off-peak sunlight. Gentle exposure to the sun will not only reduce the risk of over-watering, but it'll also maintain the colourful variegations of its foliage. Due to its intolerance to low light, situations where a newspaper can’t be read without the use of artificial light, must be avoided at all costs. We'd recommend situating your specimen in a semi-shaded conservatory, south-facing porch or within two metres of a window.

As this species requires good levels of light, its soil will dry out rather quickly. Aim to water once the top third dries out, preventing the risk of dehydration. The combination of prolonged droughts and extended periods in direct light will result in sun-scorch and terminal damage to its leaves. Reduce waters slightly in the autumn and winter months to replicate its dormancy. Under-watering symptoms include a loss of older leaves, stunted growth, yellowed foliage and wilting. Over-watering symptoms include yellowed lower leaves, a rotten stem, and for severe cases, wilting with mouldy soil. For situations where its base or roots have become rotten, click on this link!

Average room humidity is best. At monthly intervals, perform a gentle hose-down to hydrate its leaves and reduce the number of dust particles resting on its foliage.

Fertilise every two weeks during the growing period and every four weeks in the autumn and winter. Although 'Houseplant' labelled fertilisers are best, a general-purpose feed at half the recommended strength is also acceptable as long as you're cautious with over-dilution.

Curled leaves and dried brown edges are the result of too little water and over-exposure to the sun. Although Papyrus can naturally do well in sun-filled locations, those that haven't acclimatised to the harsh rays will show signs of sun-scorch and environmental shock. Gradually increase the amount of light every few days, starting from an indirect location to a few hours of morning/evening sun over a few weeks. Prolonged exposure will significantly speed the process of dehydration, so consider transplantation into a bigger pot in the spring to wrap the roots around moister soil.

Root rot is a common issue among specimens sat in too dark environments with prolonged soil moisture. Symptoms include rapidly yellowing leaves, mouldy soil, stunted growth and a rotten brown base. Take the plant out of the pot and inspect health below the soil line. If the roots sport a yellow tinge, you're good to go, but if they're brown and mushy, action must be taken immediately. Learn more about addressing root rot on this link.

When a Papyrus is severely dehydrated, most of its leaves will crisp-up and fall off - leaving you with a naked plant. Although it may spell the end of juvenile plantlets, there may still be light at the end of the tunnel for more established specimens. If its stem is still plump without any signs of retraction, prune-away the severely affected areas and provide evenly moist soi. Provide a good level of indirect light and temperatures above 15°C (59°F). After a few weeks, new life will form in the nodal junctions on the underground rhizomes, signalling the start of its recovery process.

A dark location (shelves, etc.) will promote the specimen to develop small or no juvenile leaves, giving the impression of 'leggy' or naked growth. The length between the nodes will also dramatically become larger, harvesting less energy that can be converted into sortable sugars. Be sure to increase the amount of indirect light somewhat, and give the specimen a gentle supplement of 'Houseplant' labelled feed to help with its stored energy.

Pests could arise at any time, with infestations starting from the original nursery or via contamination in your home. Spider Mites and Mealybugs to tend to be the usual inhabitants, with the first being minute and almost transparent, roaming the leaves in search of chlorophyll and a site to hide its eggs. The latter, however, will stand out much more, with white cottony webs developing across the foliage and stems. Thoroughly check the plant's cubbyholes before giving it the all-clear, or click on the appropriate links to learn more about eradicating these issues!

If your Papyrus develops basal collapse, it may spell the end of its life. The rhizomes, which are located below the soil line and act like a modified stem, is the lifeline for a successful specimen, so any issues of rot will kill it outright. If yours has problems of this, be sure to take the plant out of the pot and inspect its roots. Prune away any rotten areas and check its base for a softened profile. Remove any individual plants that have a rotten bottom and repot the healthy specimens in a fresh batch of 'Houseplant' compost. Provide a brighter location and reduce the number of waters slightly to avoid further rot. Discard the plant if there is no sign of health below the soil line.

Carl Linnaeus first described this species in 1753, who used the Greek equivalent of the Egyptian word, papuro, meaning 'royalty'. This can be inferred to the central government who had total control over the processing of wild Papyrus in the disputed land. Many Egyptians referred the plant to djetor tjufi or wadj, which translates to 'freshness' when manipulated into rolls for boat construction. The Distribution of Cyperus papyrus.

15° - 24°C   (59° - 75°F)
H1b (Hardiness Zone 12) - Can be grown outdoors during the summer in a sheltered location with temperatures above 12℃  (54℉),  but is fine to remain indoors, too. If you decide to bring this plant outdoors, don't allow it to endure any direct sunlight as it may result in sun-scorch and dehydration. Regularly keep an eye out for pests, especially when re-introducing it back indoors.

Up to 1m in height and 0.5m in width once they reach maturity. The ultimate height will take between 5 - 7 years to achieve, with up to 12cm of new growth per year. Those situated indoors will live for many years without the need to drop their leaves over the dormancy period.

Rhizome Cuttings (Easy) - Choose the healthiest, most established rhizomes that show no signs of damage or disease. This method can be taken from spring to early summer, using between two to four fronds within each rhizomatous section. Cut directly below a node using a clean knife, and separate its root systems from the rest of the root ball. Make sure the propagated rhizome is at least 8cm in length so that it has enough stored energy to continue growing. Plant it straight into a moist, well-draining medium to avoid root rot. Sprinkle a half a centimetre of soil onto of the rhizome to lock in surrounding moisture and wait for new growth that may take up to several weeks. Avoid direct sunlight and offer high humidity with temperature (15°C, 59°C) for success. After its second new leaf, treat it like a normal specimen, following the care tips above! 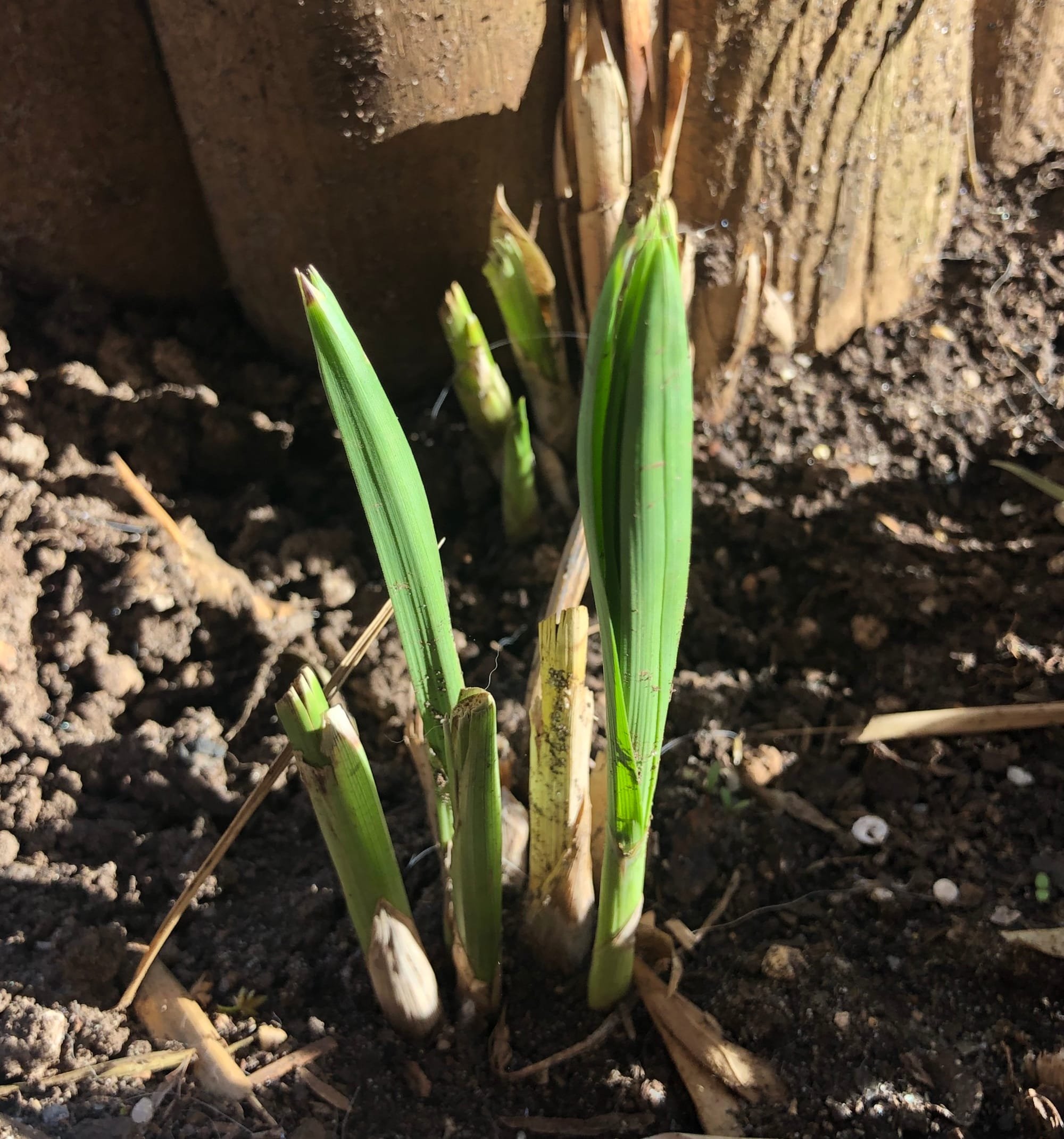 Two new rhizomatous offsets developing from a pruned branch which can be separated once the juvenile leaf matures.

It's rather unlikely for indoor-grown Papyrus to flower in a domestic setting due to the unfavored growing conditions. The summer inflorescences are housed at the branches' terminals, forming feather-like clusters of grey and brown. Have a look at the image below for a visual reference. 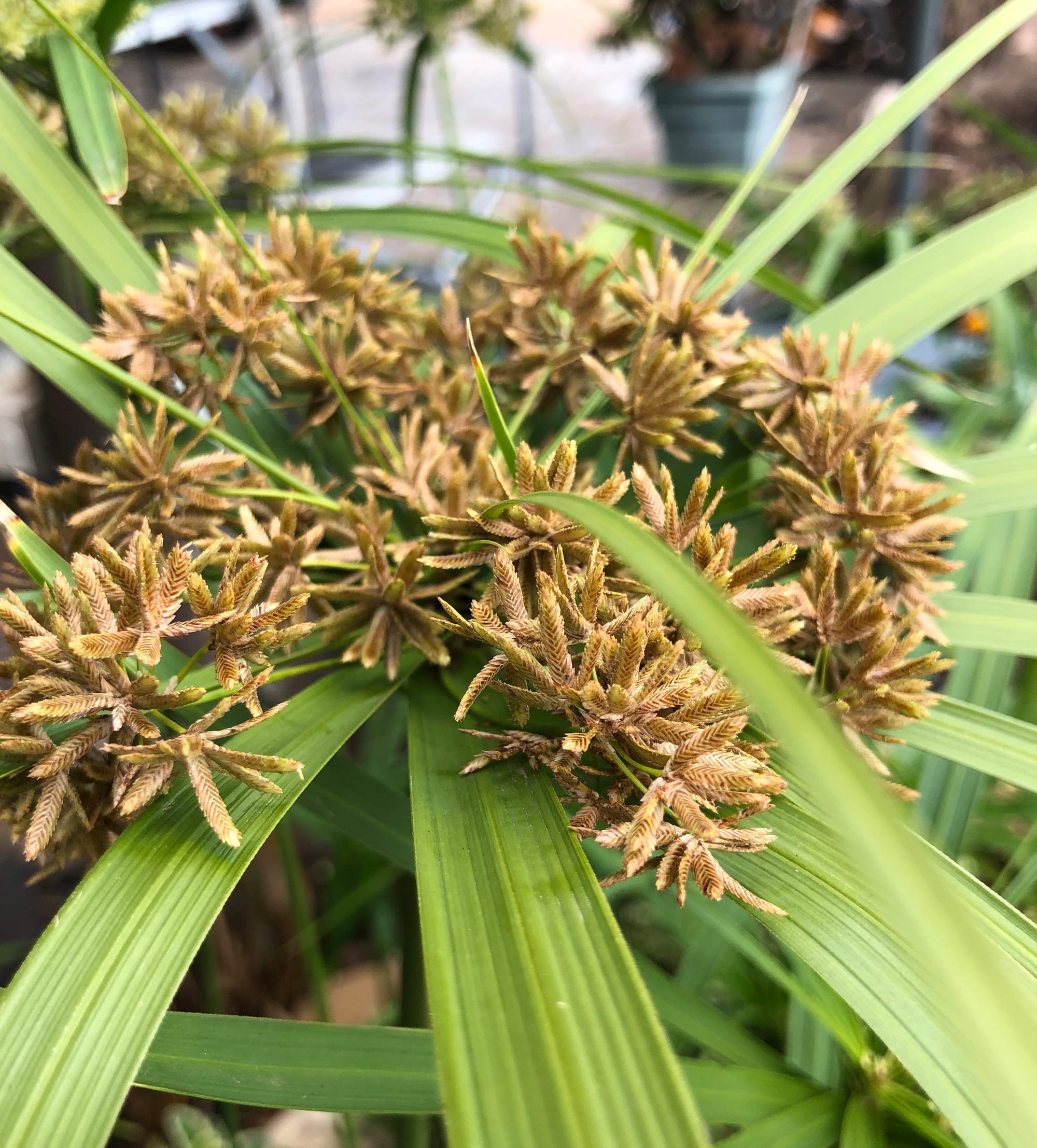 The spent flowers of Cyperus papyrus.

Repot every two years in the spring using a houseplant-labelled compost and the next sized pot with adequate drainage. Hydrate the plant 24hrs before the tinkering with the roots to prevent the risk of transplant shock. For those that are situated in a darker location, add a thin layer of small grit in the pot's base to improve drainage and downplay over-watering. Click here for a detailed step-by-step guide on transplantation, or via this link to learn about repotting with root rot.

Keep an eye out for mealybugs, aphids, spider mites, whitefly, blackfly & vine weevils that'll locate themselves in the cubbyholes and undersides of the leaves, with the exception of the latter in soil. Common diseases associated with Papyrus are root rot, leaf-spot disease, botrytis, rust, powdery or downy mildew & southern blight - click here to learn more about these issues.