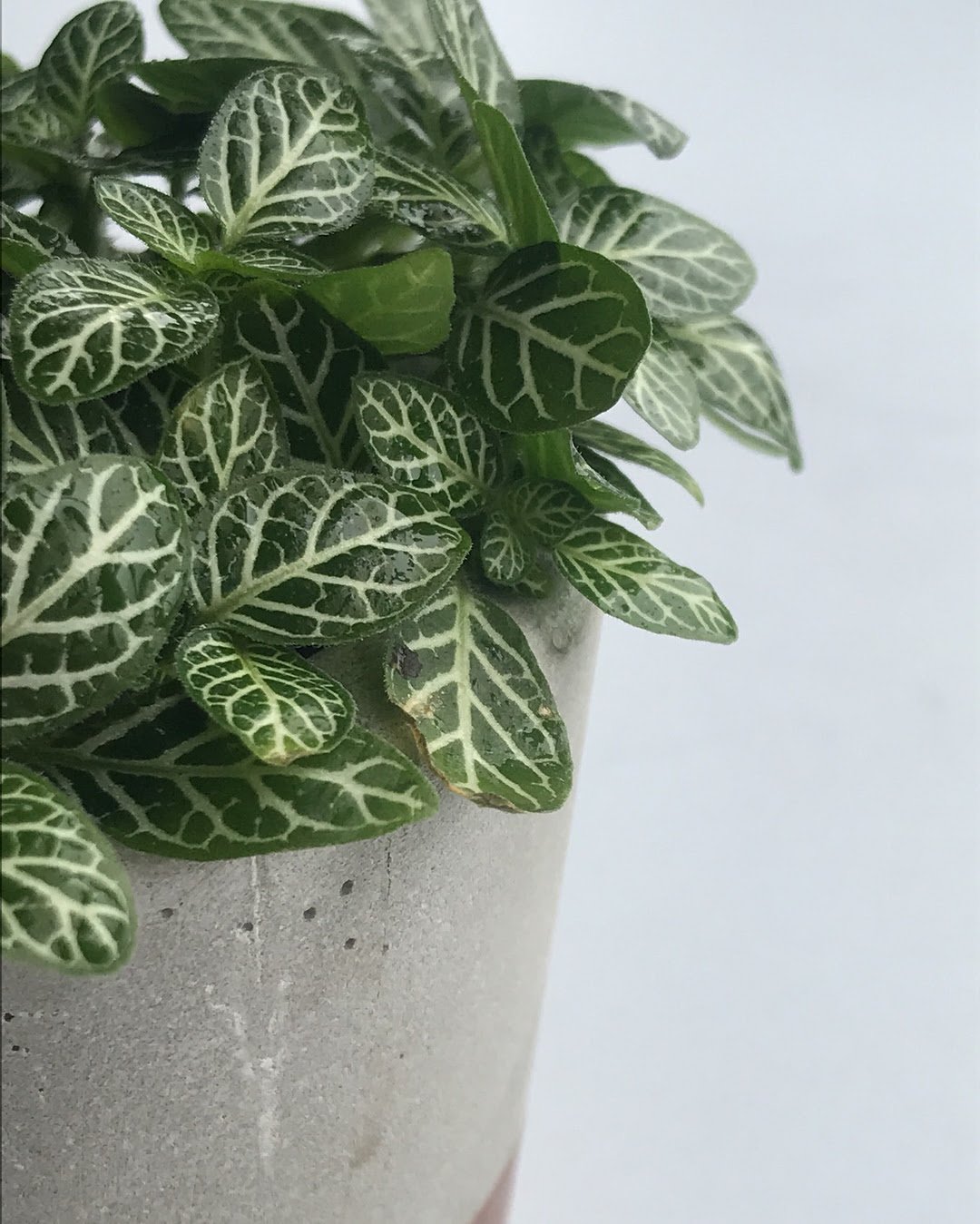 Bright, indirect light is best for Fittonia, as too little light may result in lower yellowing leaves. Specimens grown in darker locations will need to be watered far less than those in brighter climates due to the increased chance of botrytis when excess moisture remains on the leaves. Avoid direct sunlight at all times.

Only allow the top inch to dry out in between waters, reducing this slightly further in the autumn and winter. Although Fittonia will dramatically wilt if they endure short periods of droughts, it's usually harmless and should bounce back after several hours if the foliage is functioning still. Under-watering symptoms include a bare stem with little or no remaining leaves & stunted growth. These are commonly down to either forgetfulness or intense sunlight; scroll down to 'Common Issues' for more information. Over-watering symptoms include yellowing lower leaves and a rotten stem. Make sure your plant is situated in a brighter environment with slightly fewer irrigations if this is the case. Never tinker with the roots unless wholly necessary during a repot as it could cause transplant shock and eventual death; it's always best to leave a Fittonia at bay, instead of addressing the situation via its soil.

High humidity will slow the rate of drying soil and dehydration considerably, so introduce a pebble tray to improve its surrounding environment. Mist the foliage from time to time to hydrate its leaves and wash-away the thin layer of dust. Those situated in dark locations mustn't be over-saturated as excess moisture, and poor air circulation could develop into botrytis or leaf-spot disease.

Supplement using a houseplant-labelled feed every two weeks during the growing period and monthly for the rest of the year. Never over-supplement in the dormancy period as it'll lead to the root-burn with yellowed leaves and spindly growth. 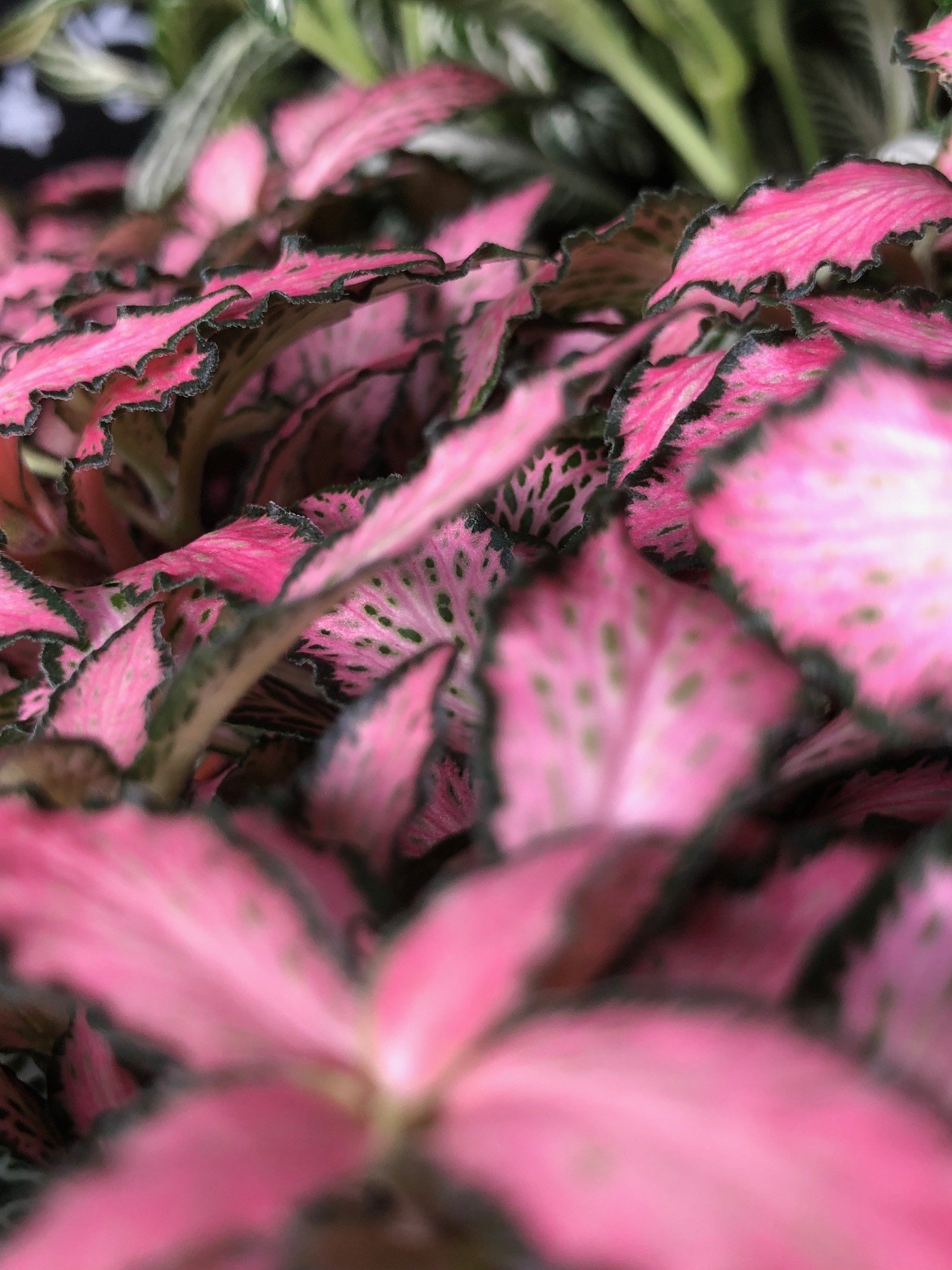 When a Fittonia is severely dehydrated, most of its leaves will crisp-up and fall off - leaving you with a naked plant. Although it may spell the end of juvenile plantlets, there may still be light at the end of the tunnel for more established specimens. If its stem is still plump without any signs of retraction, prune-away the seriously affected areas and contain the plant (with its pot) in a transparent bag that has small holes. Keep the soil continually moist, providing a good level of indirect light and temperatures above 15°C  (59°F).  After a few weeks, new life will form in the nodal junctions on the stems, signalling the start of its recovery process. Maintain a sealed environment for the following month until you feel it's necessary to release it back into the open air. For the prevention of environmental shock, be sure to introduce a humidity tray for higher levels of atmospheric moisture around the plant in its new setting. Not only will this ease the specimen back into normal functioning life, but it'll also reduce the rate of transpiration (water-loss in the leaves), and therefore downplay the risk of dehydration and further decline. 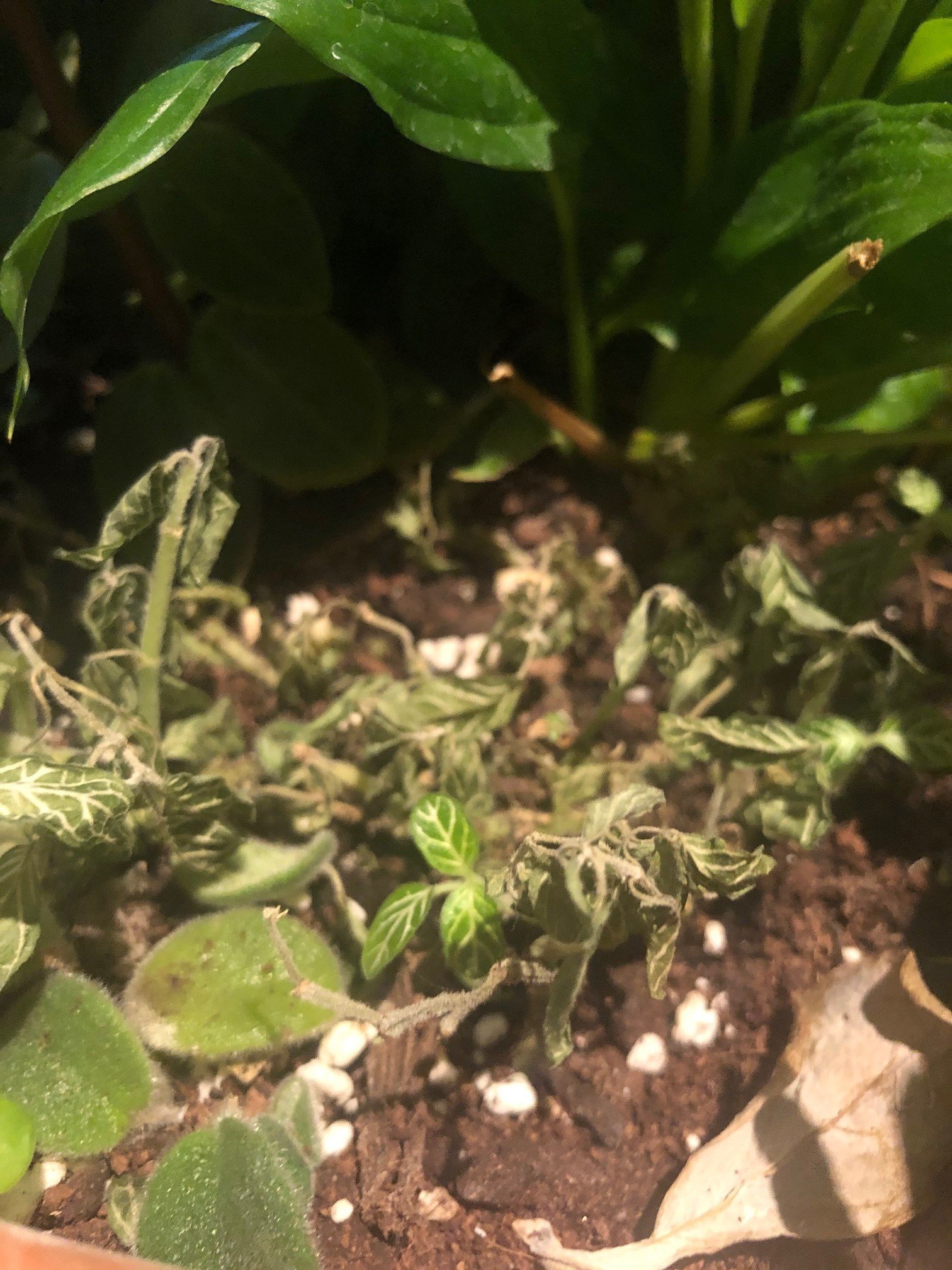 New leaves will emerge within a few weeks if its soil remains thoroughly moist.

An under-humid room will not benefit Fittonia in the slightest. Mist the foliage weekly and introduce a humidity tray to keep life manageable. Avoid situating it within four metres of an operating heater, as the dry air will spread up the process of browning leaf-tips and soil dryness.

Excessive yellowing older leaves are typically due to over-watering, where soil conditions are far too soggy for its liking. There are two ways in which you can help alleviate the situation; decrease irrigations, move to a brighter location with bright indirect light, or inspect the root ball for root rot. For the latter, check for brown, mushy root systems, commonly found at the base of the pot. If the roots are yellow and plump, you're good to go; however, if they're not, cut off the affected areas using clean utensils and replace some of the soggy soil with a fresh batch of houseplant compost; introduce some grit for extra drainage and promotion of a stronger root system.

Curled leaves and brown leaf-edges are the result of too little water and over-exposure to the sun. Fittonia are best located in bright, indirect settings, and those that haven't acclimatised to the harsh rays will show signs of sun-scorch and environmental shock. A splash of winter sunlight is acceptable as long as the soil moisture is regularly observed, with complete avoidance once summer comes along. 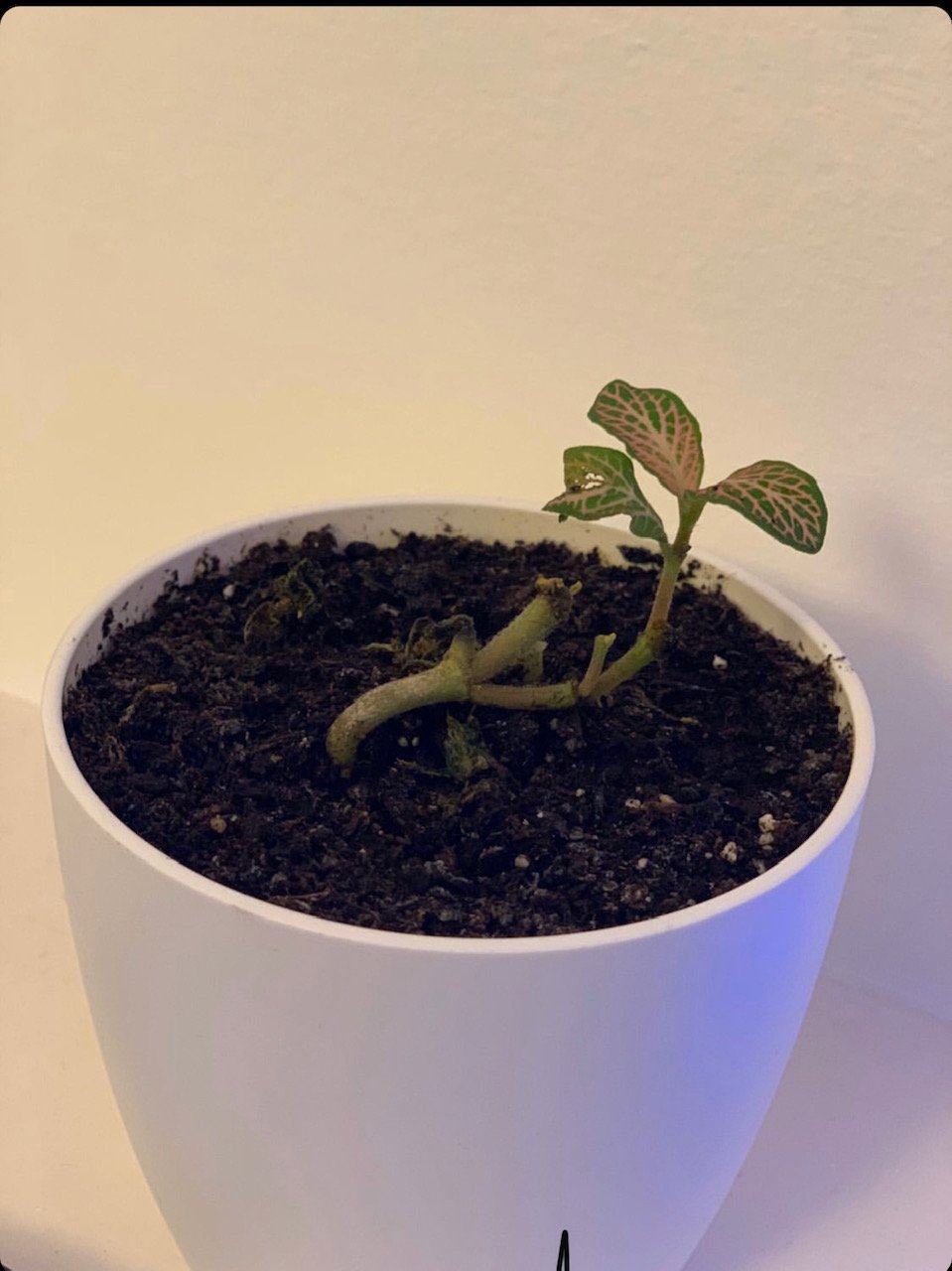 A Fittonia albivenis surviving a near-death experience of under-watering.

Fittonia is a genus of perennial creepers that mainly originates from tropical regions of South America, including Peru, Bolivia and Brazil. The genus was named in honour of an Irish writer and keen botanist, Sarah Fitton who conducted most of her work during the 1860s. The most popular species, F. albivenis, was first described as Adelaster albivenis in 1861, before being reclassified several times (including the synonym, F. verschaffeltii) into its current name by Richard Brummitt in 1979. 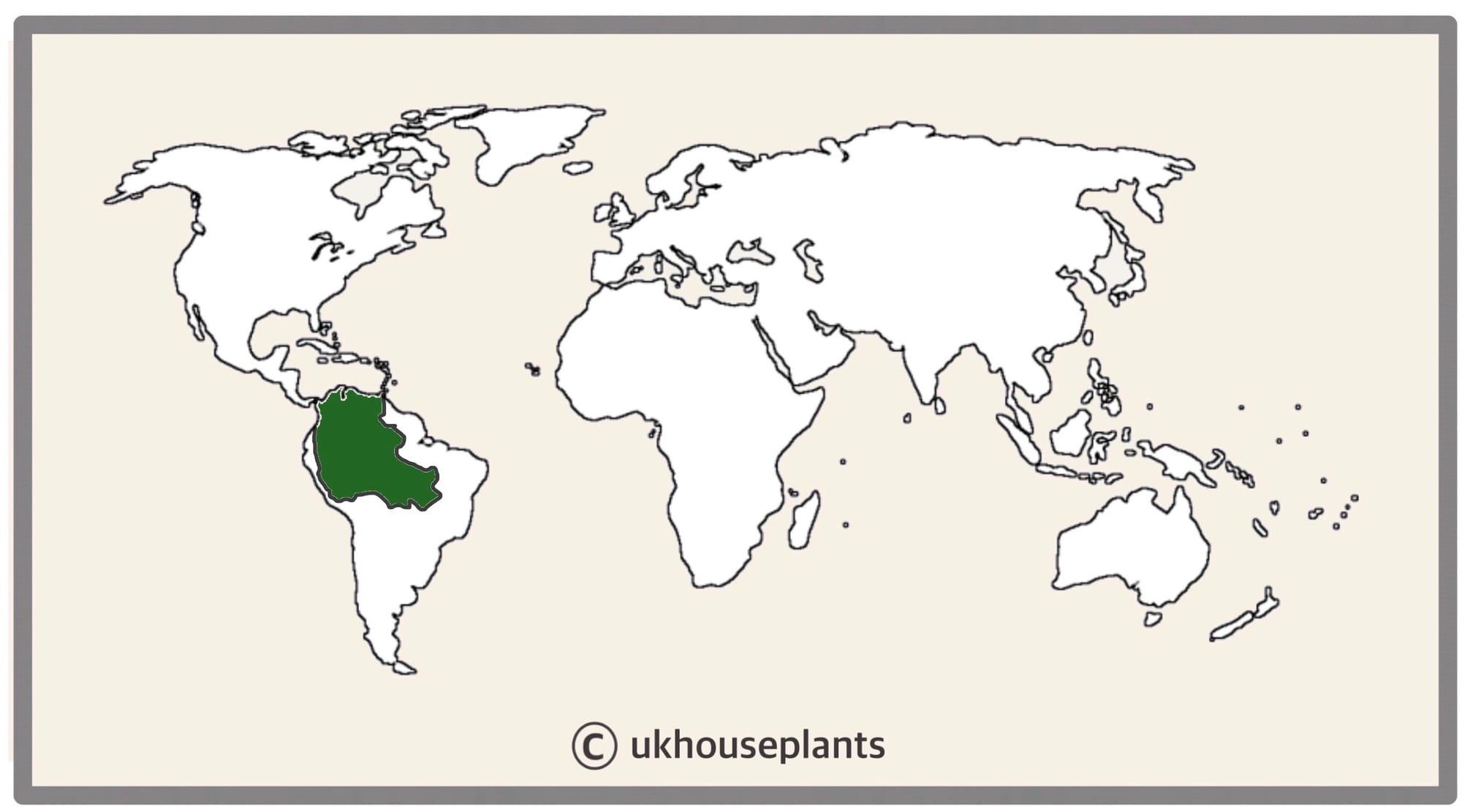 The Distribution of Fittonia.

Up to 0.3m in height and 0.6m in width once they reach maturity. The ultimate height will take between 3 - 5 years to achieve. The F. gigantea can reach heights of 60cm once maturity is reached.

Remove yellowed or dying leaves and plant debris to encourage better growing conditions. Pruning can be done with either clean scissors or by pinching the leading shoots. Remember to make clean incisions as too much damage can shock the plant. 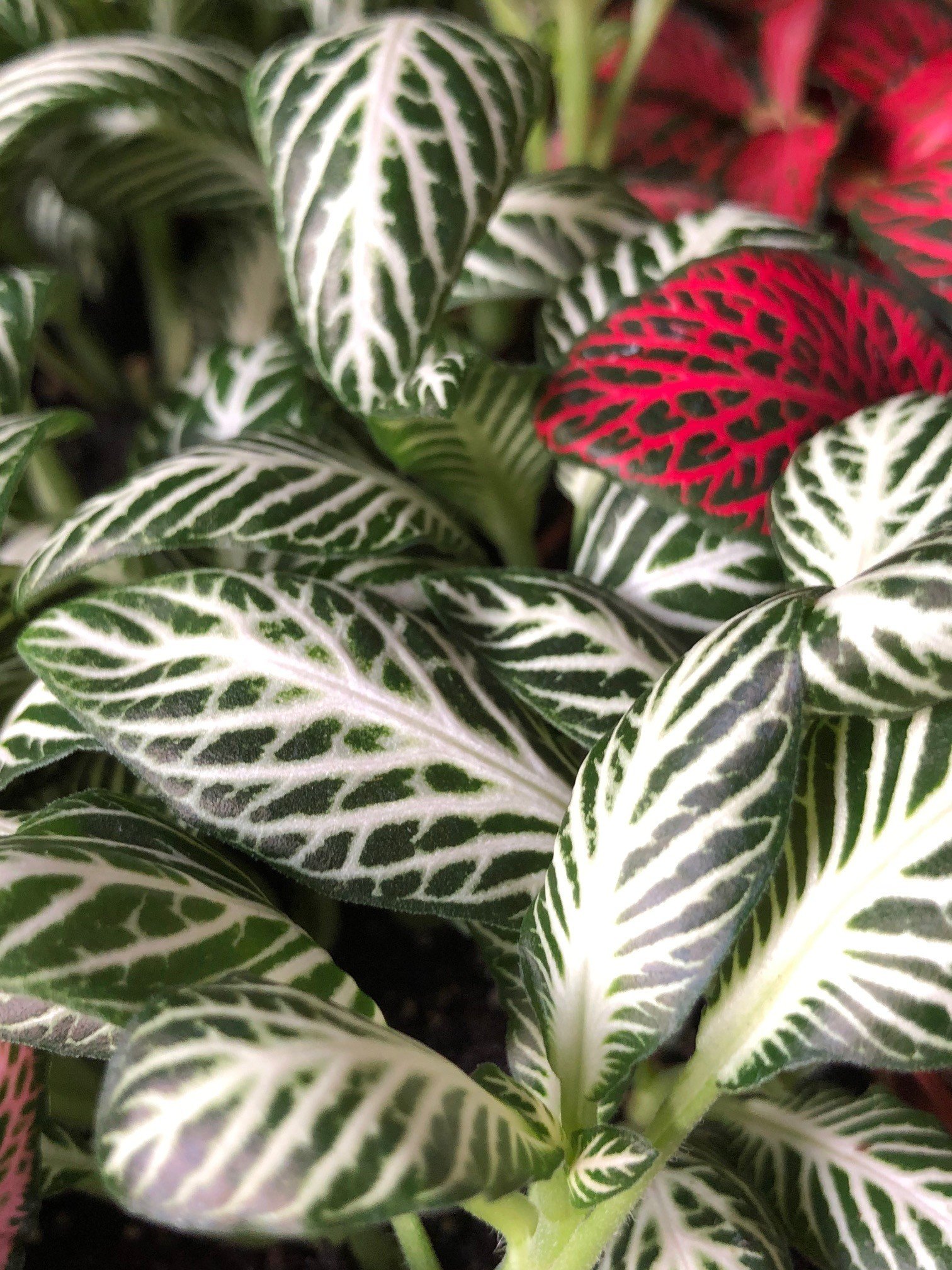 Via Seed, Division or Stem Cuttings.

Division (Easy) - Split the root ball into several sections during the start of spring. Dividing too-small segments of the rootball could lead to transplant shock or unsuccessful propagation. Sections that are at least 5cm (2 inches) in diameter serve the best chance of propagation due to the stored energy in the roots and stems. Place the sections into houseplant compost and water regularly, avoiding prolonged sunlight or persistent droughts.

Stem Cuttings (Moderate) - This propagation method can be taken from spring to late summer, using between three to five leaves, with a stem length of 5cm (2 inches). Cut directly below a node using a clean knife to reduce bacteria count and remove the older 50% of the leaves. Dip the wound in some rooting hormone before setting it into a well-draining potting mix, for example a houseplant-labelled compost. Blackleg can occur when the bottom wound becomes infected, typically caused by water-logging or a too-damaged wound. Maintain bright light and evenly moist soil with the avoidance of direct sunlight or cold draughts. Wrap the pot (& foliage) in a transparent bag or within a miniature greenhouse, and provide bottom hear of temperatures above 18°C (54°F). Remove the bag after a month and maintain the same cultivation. Follow the care advice mentioned in the article's top half. This method will take up to three months, so patience and the correct environment are paramount for success!

During late spring, Fittonia will produce small white or pink spikes that are situated in the stems' nodal junctions. The blooms are unfortunately quite rare for specimens grown indoors, due to the insufficient growing conditions. 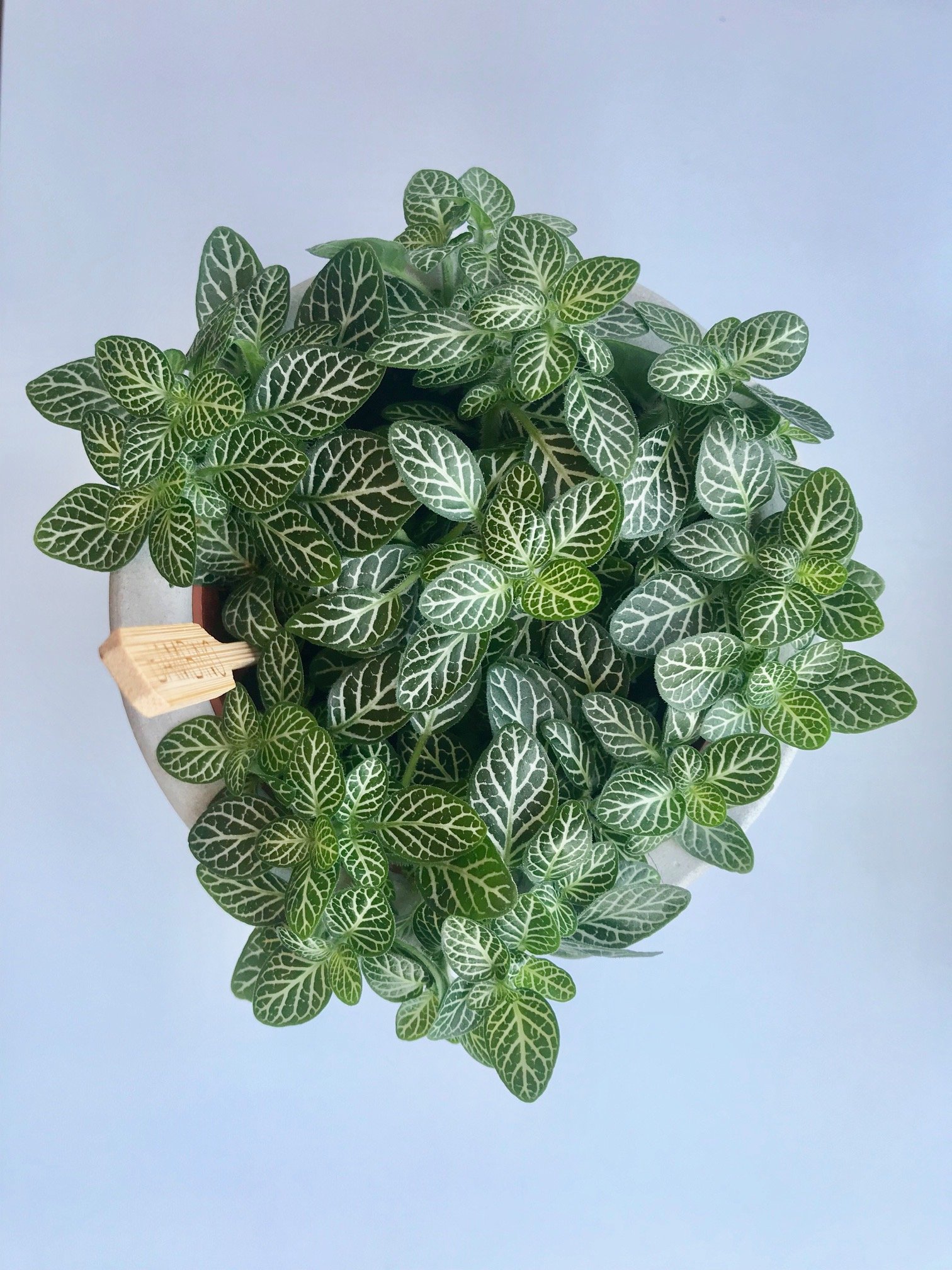 Repot every three years in spring using a houseplant-labelled compost and the next sized pot with adequate drainage. As Fittonia are ground creepers, they tend to grow quicker in a wide, shallow pot; visit your local garden centre and search for 'Terracotta Bulb Bowls' which should be on sale all year round. Hydrate the plant 24hrs before the tinkering with the roots to prevent the risk of transplant shock. For those that are situated in a darker location, add a thin layer of small grit in the pot's base to improve drainage and downplay over-watering. Click here for a detailed step-by-step guide on transplantation, or via this link to learn about repotting with root rot. 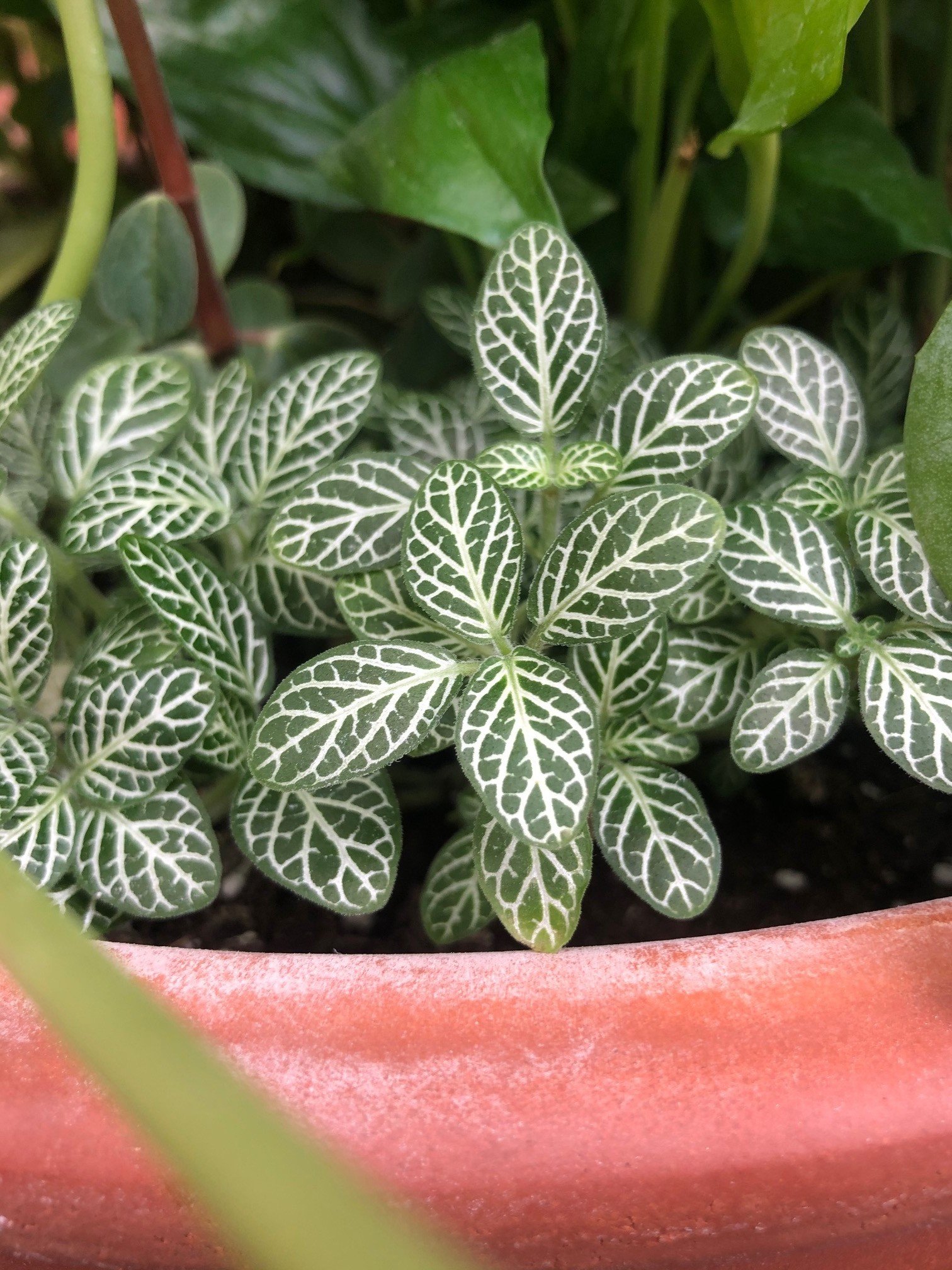 Fittonia serve as a great 'ground cover' plant in Terrariums due to its fast-growing nature and beautiful foliage!

Keep an eye out for mealybugs, aphids, spider mites, scale, thrips, blackfly, vine weevils & root mealybugs that'll located themselves in the plant's cubbyholes, with the exception of the latter two in soil. Typical diseases associated with Fittonia are root rot, leaf-spot diseases, rust, southern blight and powdery mildew - click here to learn more about these issues.