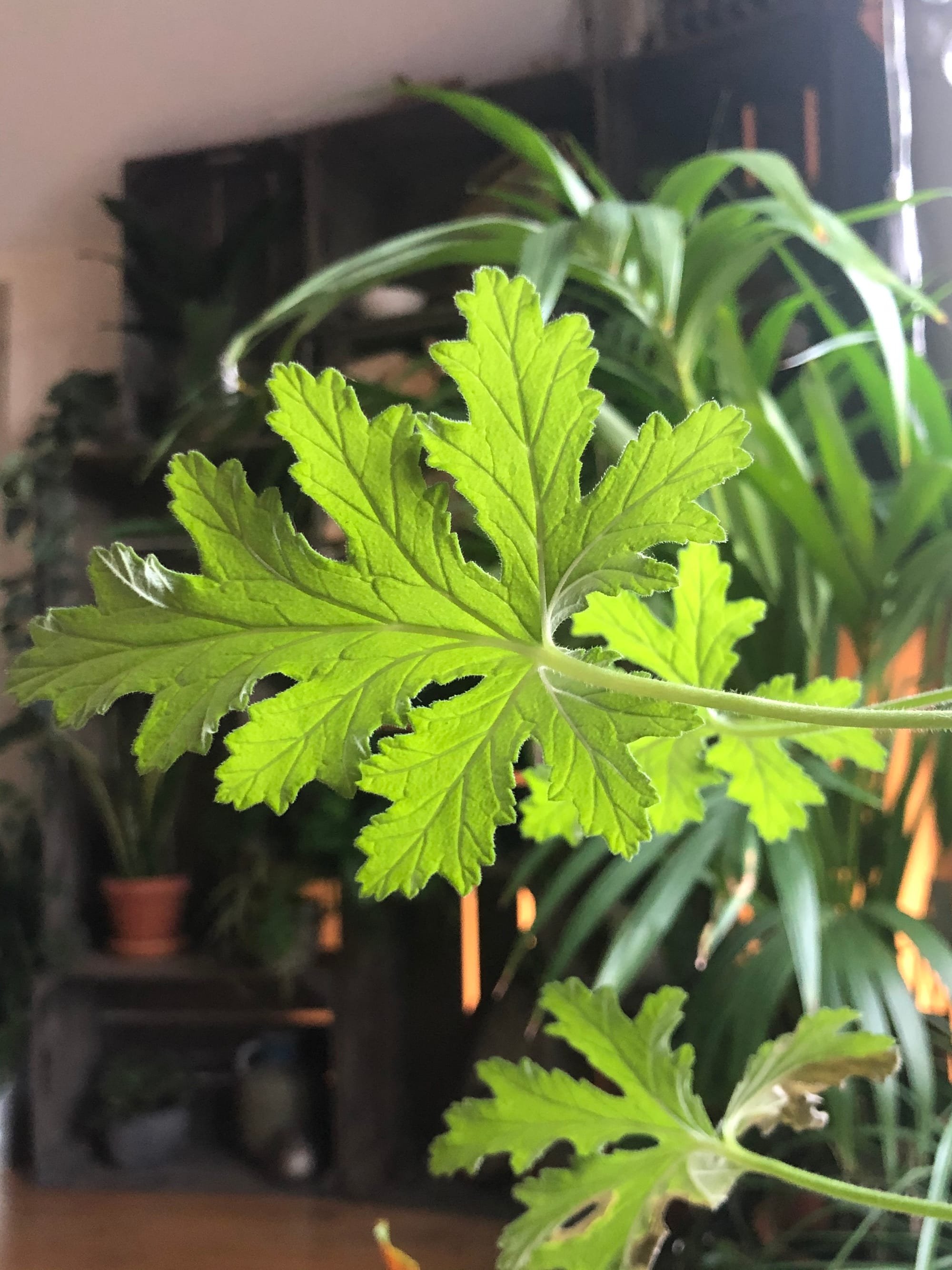 Lemon Scented Geraniums prefer bright, indirect light with the absence of deep shade. As you'll have to keep the soil relatively moist, the risk of soil mould and over-watering is dramatically increased when maintaining too little light. A setting that boasts a splash of morning or evening sunlight for up to two hours is perfect for good, quality growth. Remember, those kept in brighter or warmer locations are more susceptible to dehydration and sun-scorch, so be sure to mentally note when your specimen needs water.

Maintain evenly moist soil, allowing the compost's top third to dry out in between waters. It's important not to promote what's known as 'irrigation abuse', whereby the specimen is subjected to periods of droughts, followed by floods of hydrations. Not only will this promote unreliable foliar growth, but it could also result in yellowed older leaves. Under-watering symptoms include weak growth, sunken or yellowed leaves, little to no growth and dry, crispy legions forming on the leaves. These issues are typically caused by too much light/heat or forgetfulness. Remember, the brighter the location, the more watering you'll need to do. Over-watering symptoms include a weakened or rotten stem, no new growth, yellowing lower leaves and eventual plant death. Click here to learn more about root rot and how to address it!

Average room humidity is excellent for this plant. At monthly intervals, perform a gentle hose-down to hydrate its leaves and reduce the number of dust particles resting on its foliage.

Yellow or dull older leaves could be the product of irregular watering, along with a nutrient deficiency, too. If you're having issues of persistent droughts, followed by periods of over-watering, the specimen may begin to show signs of poor health with its foliage taking most of the brunt. You must also regularly feed the plant, as low nutrient levels within the soil could also result in weakened photosynthetic rates, thus further hurting the plant's wellbeing. Although the leaves won't revert to its former green glory, the juvenile growth will show better signs of health within the oncoming weeks.

Alternately, yellowing lower leaves could be a sign of over-watering, but equally is a byproduct of maturity. If the older leaves rapidly become yellow in quick succession, over-watering could be to blame. People don't realise that a plant's root system needs access to oxygen too; when soil is watered, the air will travel upwards and out of the potting mix. A lack of accessible oxygen for the roots will cause them to subsequently breakdown over the oncoming days. Click on this link to learn more about root rot and how to address it.

Curled leaves and brown leaf-edges are the result of too little water and over-exposure to the sun. Lemon Scented Geraniums are best located in bright, indirect settings, and those that haven't acclimatised to the harsh rays will show signs of sun-scorch and environmental shock. A splash of winter sunlight is acceptable as long as the soil moisture is regularly observed, with complete avoidance once summer comes along.

Never situate it within four metres of an operating heat source, for instance, a heater or fireplace. Due to the heightened temperature, the plant will soak up far more moisture than those situated in cooler locations, increasing the chance of droughts and browning leaf-edges

Pelargonium is a genus of around three hundreds species, mostly originating from East to South Africa - except for some regions of Australia. The difference between the Geranium and Pelargonium is within the structure of its flowers and frost tolerance. Geranium has actinomorphic flowers which 'radiate' outwards in an equal manner, whereas the latter is generally zygomorphic. Pelargonium was first described by Charles Louis L'Héritier de Brutelle in 1789, using the Greek term for the 'Stork' bird, Pelargos, which originates from Africa. For those wondering, Geranium also derives from ancient Greek, translating to 'crane' that refers to the beak-like seed capsules shortly after successful pollination. The most popular indoor species, the P. graveolens, refers to the strong scent secreted by fauna tissue. 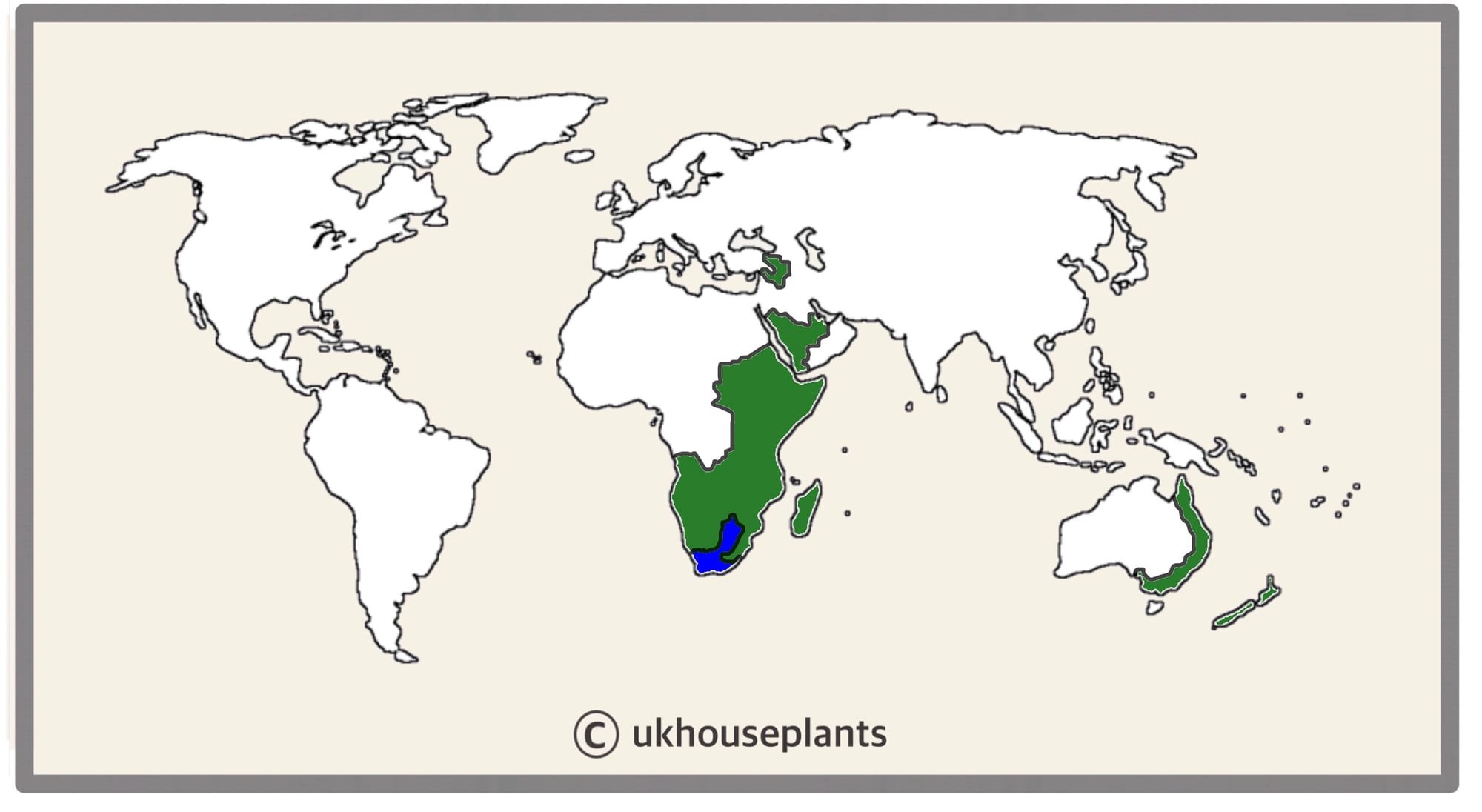 The Distribution of Pelargonium in Green & P. graveolens in Blue.

5° - 27℃   (40° - 80℉)
H2 (Hardiness Zone 10) - Tolerant of temperatures above freezing. This plant will die if left in temperatures below frosts; move to a conservatory or greenhouse until this risk has elapsed.

The overall size can be up to 1m (3ft) in height and 0.7m (2.5ft) in width. The ultimate size will take between 3 - 6 years to achieve when repotted biannually, with several new leaves unfurling per annum.

Stem & Eye Cuttings (Easy to Moderate) - This method of propagation is troublesome good water hygiene and a bright, suitable location. Choose the healthiest, most established stems that are slightly hardened, yet still juvenile enough to bend. Each cutting should be around 20cm (7 inches) in length for the best rates of root growth. Cut directly below a node using a clean pair of scissors to reduce bacteria count. Remove the older half of the leaves, and place the specimen into a glass of lukewarm tap water to allow the root caps to develop. Try not to submerge the leaves in the water as it may result in rot and therefore, bacteria development. After several weeks of solid root growth, which can take up to two months, place the specimen's lower third into a 10cm pot (4 inches) with 'Houseplant' labelled compost. Don't over-compact the soil as it'll strip oxygen from the soil when the plant is next watered, thus resulting in root rot. Maintain bright, indirect light and evenly moist soil with the avoidance of direct sun or cold draughts. After a further two months, follow the same care routines mentioned in the article's top half. Stem cuttings can take up to five months, so patience and the correct environment are paramount for success!

Lemon Scented Geraniums will rarely flower indoors, due to the unfavored growing conditions found within a domestic setting. 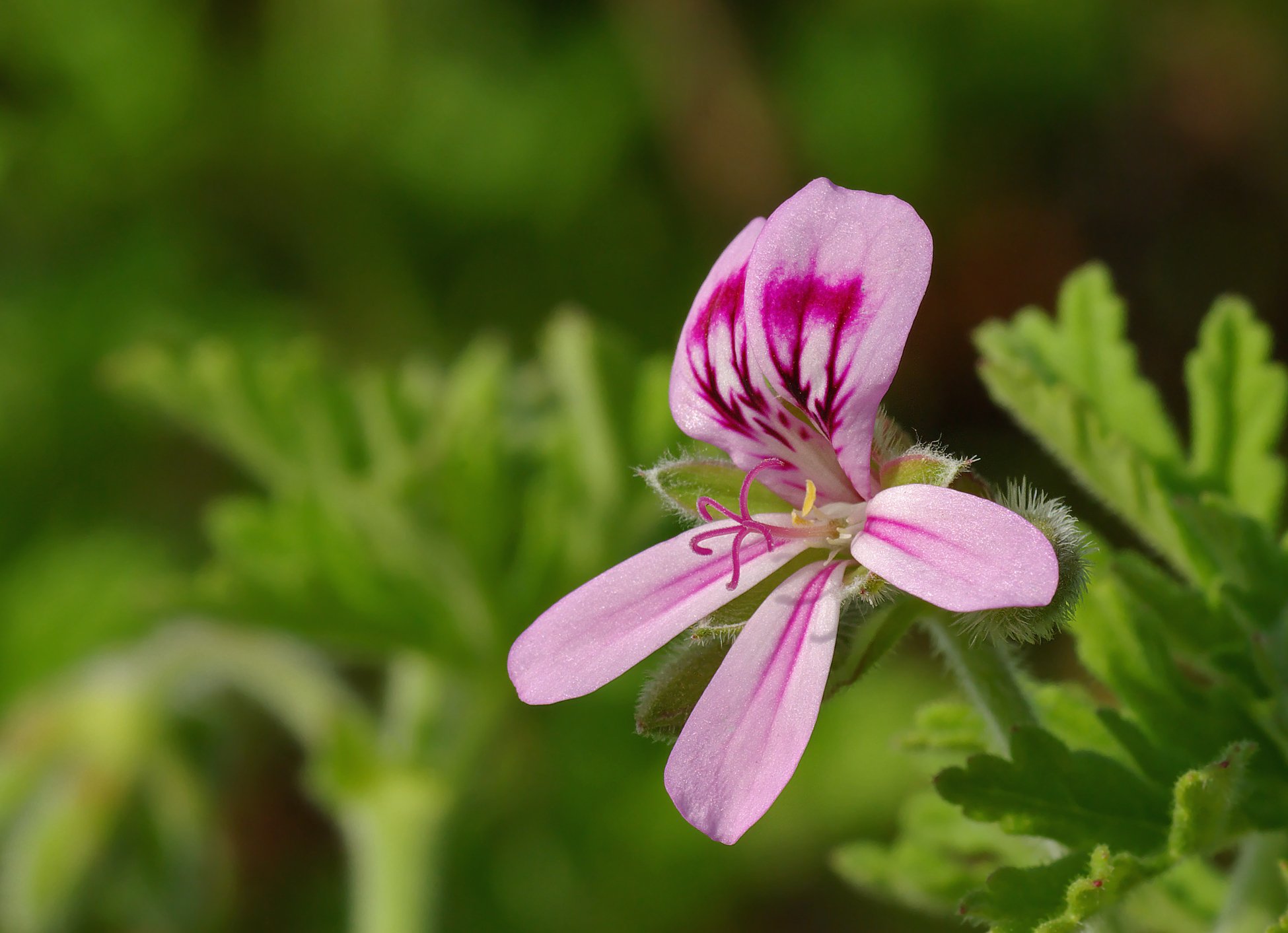 The inflorescence of a Pelargonium graveolens.

Repot every two years in the spring, using a 'Houseplant' labelled potting mix and the next sized pot with adequate drainage. Hydrate the plant 24hrs before tinkering with the roots to prevent the risk of transplant shock. For those situated in a darker location, introduce extra amounts of perlite and grit into the lower portion of the new soil to downplay over-watering risks. Click here for a detailed step-by-step guide on transplantation, or via this link to learn about repotting with root rot.