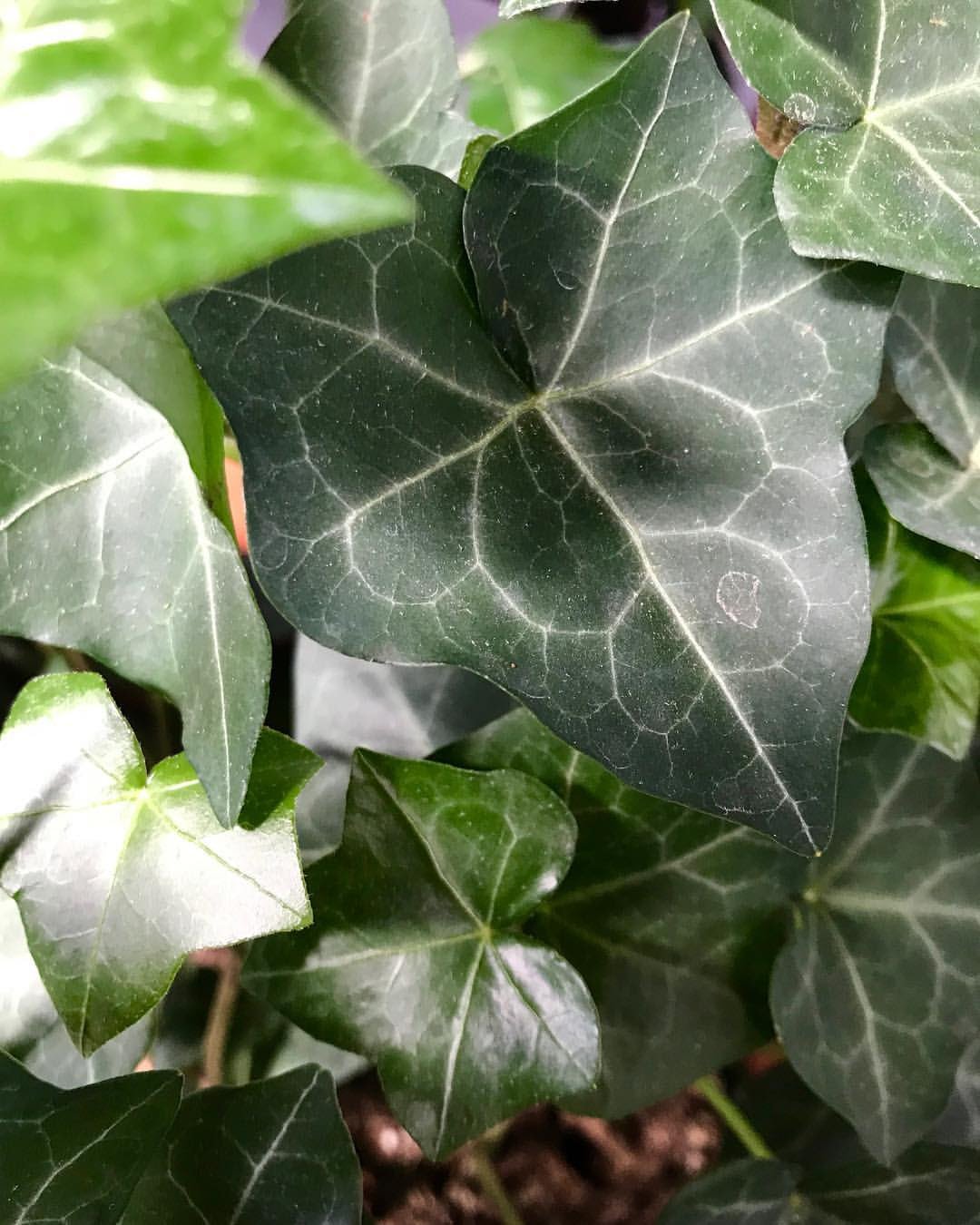 Bright indirect light is best. The combination of good soil moisture and a well-lit location will provide the best results for your Ivy. Sunny locations should be avoided at all costs. Prolonged exposure to the sun or dry soil will result in pale leaves, stunted growth and crisping foliage - if it's too hot for a chocolate bar, it'll be too hot for the plant, also.

Alternatively, lower-lit areas should only be used, if wholly necessary. Although English Ivy can thrive in shady locations, the reduced rates of photosynthesis and too moist soil will lead to a weakened plant, along with the chance of developing root rot. Variegated specimens situated in these areas will slowly revert back to its green appearance, too.

Good soil moisture is essential for English Ivy due to their reduced ability to survive droughts. Once the top two inches dry out, rehydrate the soil using lukewarm water - their root systems can be sensitive to temperature change. Furthermore, splashing the leaves each time the plant is irrigated will cause the older leaves to rot. Under-watering symptoms include crispy/curling leaves, a grey, washed-out appearance, yellowing leaves and a lack of new growth. These issues are commonly down to either too much heat/light forgetfulness. Dehydration is the number one issue among English Ivy growers, so always keep an eye out for drying soil. Over-watering symptoms, on the other hand, include yellowing lower leaves, little to no growth and a rotting stem or leaves. Never allow Ivy to endure long periods of soggy soil or a dark location as both will significantly increase the chance of over-watering and death.

Although providing a moist environment is vital, good air circulation is far more crucial for the plant's health. Introduce a humidity tray, especially in winter, to reduce the chances of browning leaf-tips. If it's situated in a darker location, be careful with over-misting; powdery mildew or leaf spot disease could arise at any time when the air circulation is poor. 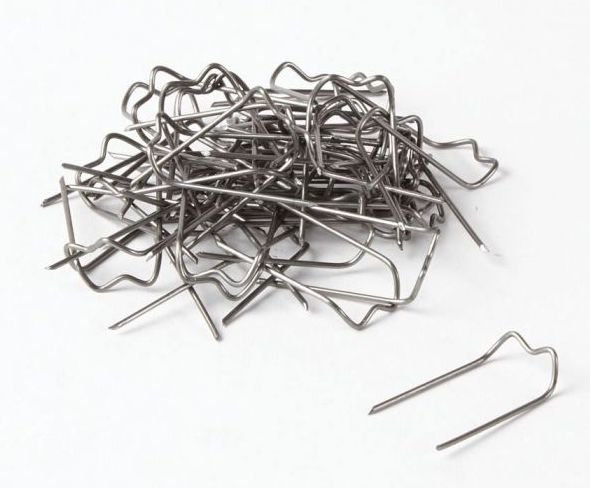 Under-watering is the biggest issue. Typical signs of this include wilting, sunken and yellowed leaves and stunted growth. If the plant is in direct sunlight, relocate it to a slightly darker area. Increase the number of waters, too - Ivy tends to grow in moist soil that rarely promotes droughts. As long as you keep an eye out for drying soil, success is inevitable.
Those situated in direct sunlight or within three metres of a radiator are most likely to suffer from these issues.

Never situate English Ivy within four metres of an operating heat source, for instance, a radiator or fireplace. Due to the heightened temperature, the plant will soak up far more moisture than those situated in cooler locations, increasing the chance of droughts and browning leaf-edges.

Yellowing lower leaves (closest to soil) is a clear sign of over-watering, usually caused by too little light. Although English Ivy can do well in darker locations, the frequency of irrigations must be reduced to counteract the chance of root rot. People don't realise that a plant's root system needs access to oxygen too, so when the soil is overly-saturated, the roots will suffocate and therefore will begin to breakdown. Click on this link to learn more about root rot and how to address it.

Hedera helix, or Common/English Ivy, is a perennial vine that originates from Eastern Europe, right up to Scotland and Ireland. Although the species was first described back in 1753 by Carl Linnaeus, historians can date back mentions of Ivy in the 17th century. Unfortunately, there is very little information regarding the origins of the name 'Hedera', but many believe it to be from Ancient Greek. The epithet, helix, is also from Ancient Greek, referring to the species' 'twisting' nature when climbing up structures or trees. 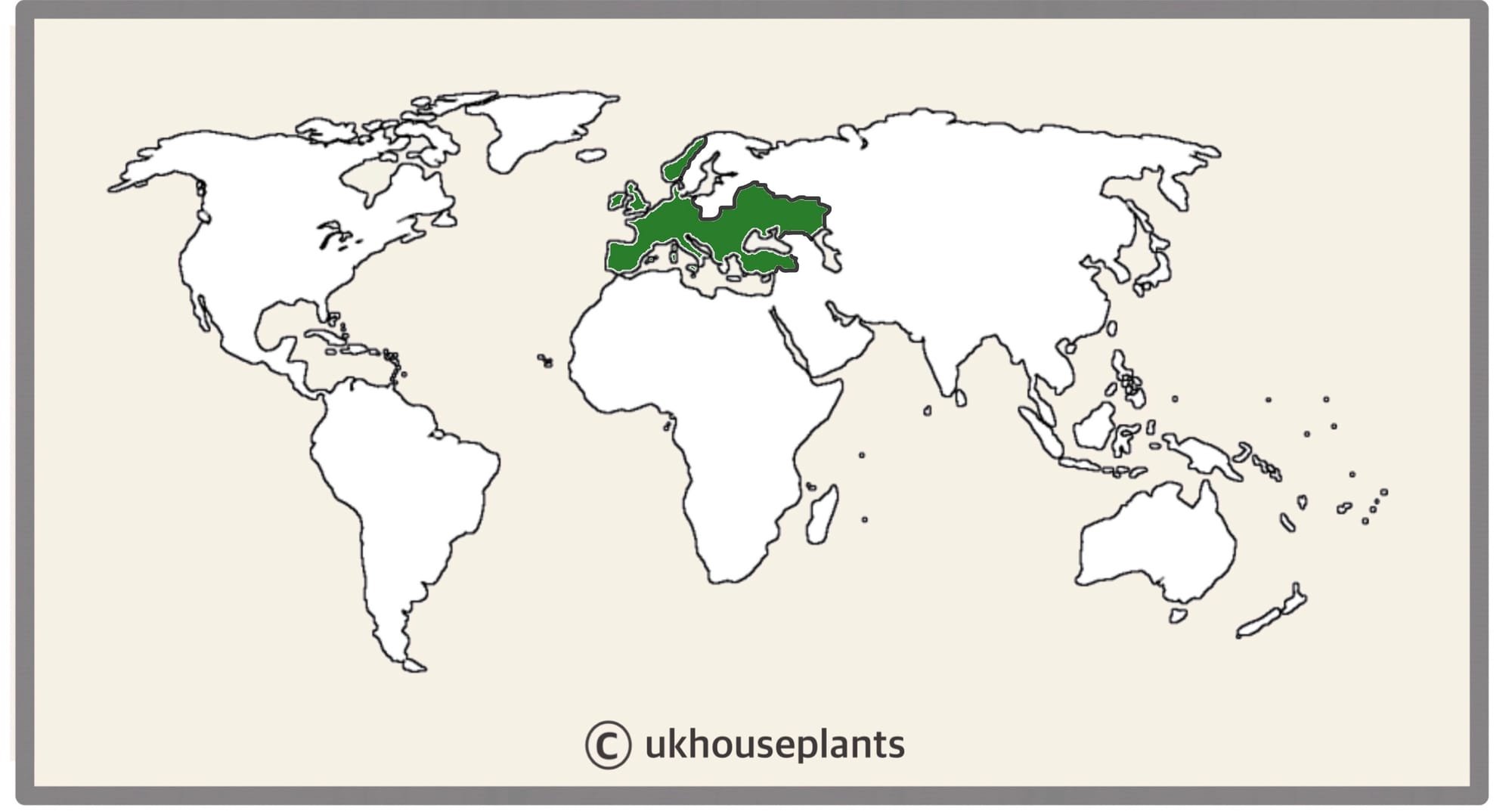 The Distribution of Hedera helix.

-5° - 30°C   (23° - 86°F)
H3  (Hardiness Zone 9)  - tolerate to temperatures below freezing. Although it can survive frosts and snow, refrain from bringing it indoors overnight if the room temperature is above 5℃  (40℉),  as a sudden change in temperature may cause environmental shock with weakened spring growth and a lack of flowers over the season's course. Instead, either leave it outdoors or in an unheated conservatory, brightly lit garage or a greenhouse until the risk of frost has elapsed.

Up to 3m in height and width, when given a structure to climb up - the ultimate height will take between 3 - 6 years to achieve. Ivy that naturally grow in the wild can reach heights of up to fifteen metres; however, smaller root systems and less favourable growing conditions mean that they'll only grow to three metres.

Stem & Eye Cuttings (Moderate) - This method of propagation is troublesome without the aid of bottom-heat and a controlled environment. Choose the healthiest, most established stems that are slightly hardened, yet still juvenile enough to bend slightly. Each cutting should only have ONE leaf and two nodes (one for the leaf and the other below for root development that'll be submerged in the soil). Cut directly below a node using a clean knife to reduce bacteria count. Situate the lower node into moist 'Houseplant' compost, with the only the leaf sticking out of the soil. 'Blackleg' can occur when the bottom wound becomes infected, typically caused by water-logging or a too-damaged wound. Maintain bright light and evenly moist soil with the avoidance of direct sunlight or cold draughts. Wrap the pot (& foliage) in a transparent bag or within a miniature greenhouse, and provide bottom heat of temperatures above 18°C (54°F). Remove the bag and place into individual 7cm pots once the second new leaf emerges. Follow the same care routines, as mentioned in the article's top half. This method will take up to five months, so patience and the correct environment are paramount for success! 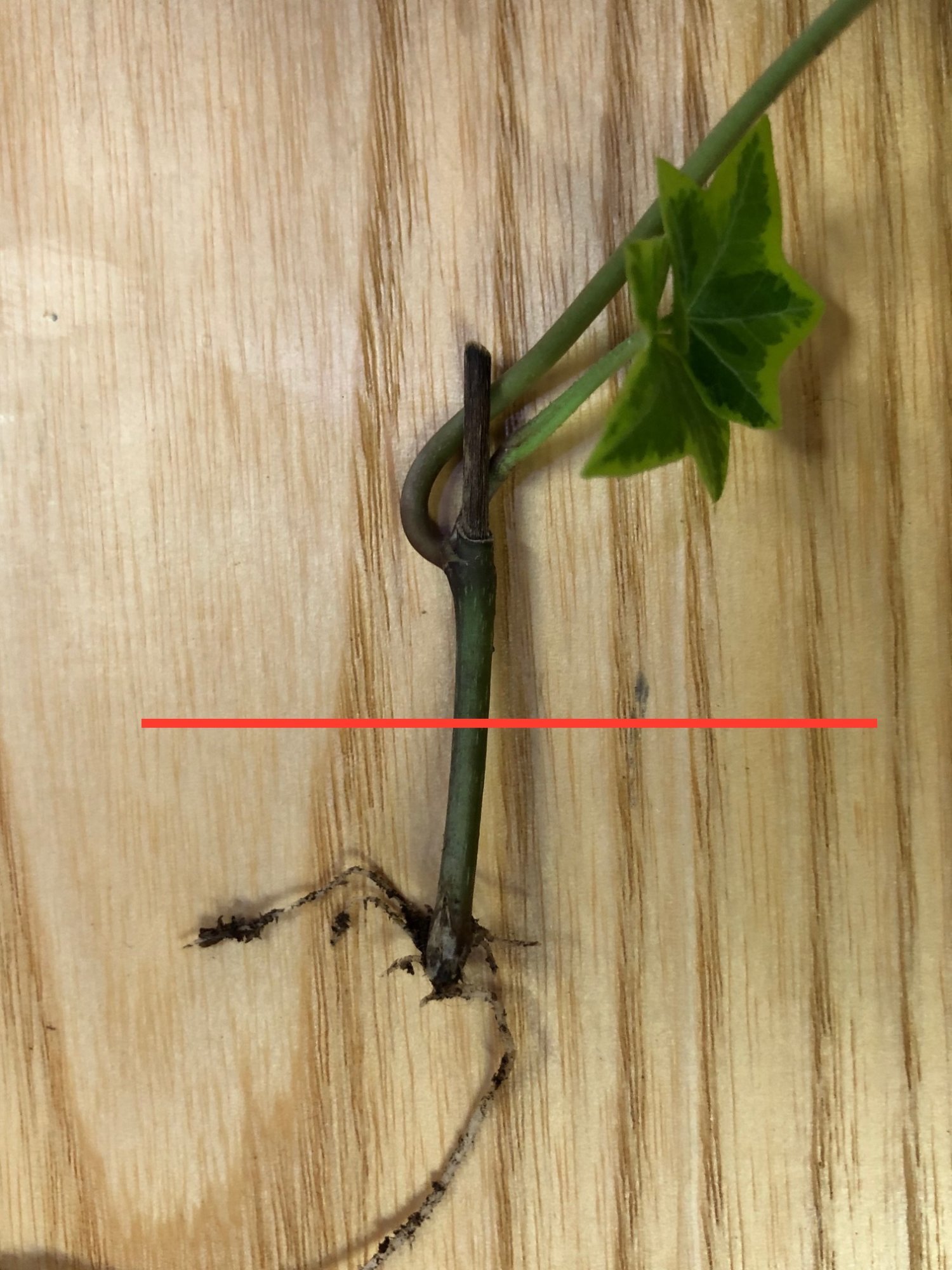 Here is an excellent example of a 'Stem & Eye' cutting that consists of two nodes and one leaf. The section below the red line should be submerged in the soil, keeping its foliage above ground to absorb airborne moisture.

English Ivy will produce small clusters of white flowers along the leading growths in the winter months. Unfortunately, due to the unfavored growing conditions indoors, Ivy will rarely bloom when domestically cultivated.

Keep an eye out for mealybugs, aphids, spider mites, scale, thrips, whitefly, blackfly, vine weevils & root mealybugs that'll locate themselves in the cubbyholes and undersides of the leaves, with the exception of the latter two in the soil. Common diseases associated with English Ivy are root rot, leaf-spot disease, botrytis, rust, powdery mildew & southern blight - click here to learn more about these issues.

This plant is classified as poisonous, so if small sections are eaten, vomiting, nausea and a loss of appetite may occur. Consumption of large quantities must be dealt with quickly; acquire medical assistance for further information.