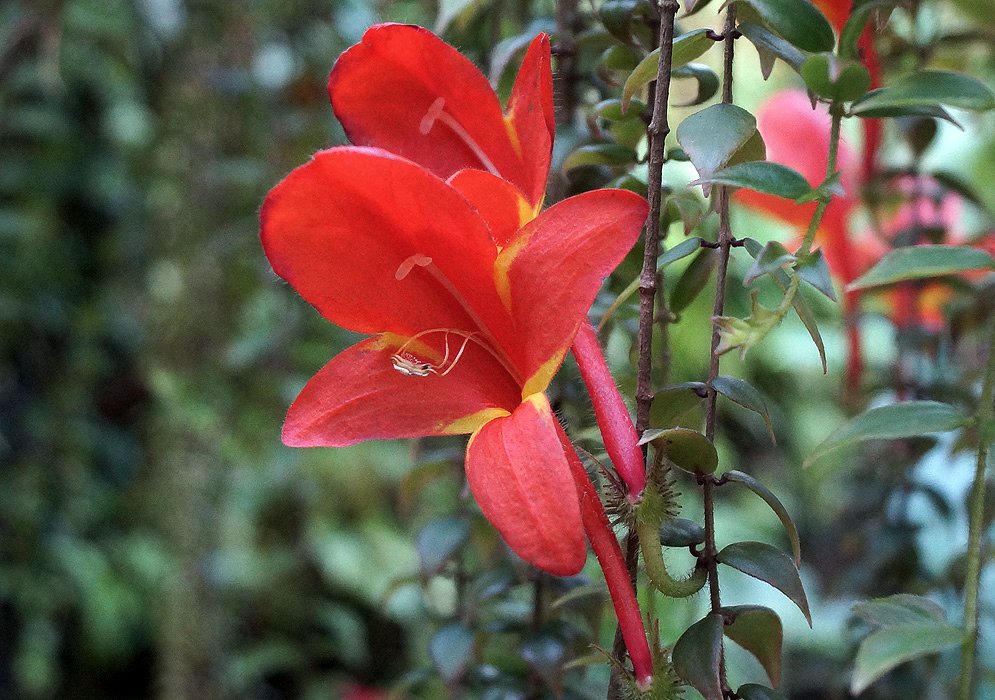 These plants are best kept in locations that offer bright, indirect light away from the harshness of the summer heat. Those kept in too strong light will show signs of dehydration, sun-scorch and a loss of buds or flowers. We'd recommend hanging yours under a sky-light window, a north or east-facing window or on a shelf within two metres of a light source.

From late autumn onwards, be sure to relocate your specimen in a more bright setting, with the possibility of morning sunlight. During this period, the strength of the rays is considerably weaker than in the summer, so an hour or two of the sunlight will benefit the specimen greatly. Always keep an eye out for excessively drying soil.

Goldfish Plants aren't a fan of having dry feet for too long. Once the top third of the soil has dried out, rehydrate the soil using lukewarm tap water that has sat for around 24hrs. This period will not only bunk-up its overall temperature, but it'll also settle any high levels of fluoride that can build up in the soil's profile. Whilst in bloom, it's essential not to promote irregular watering habits, where the plant is subject to over-watering and then sudden dehydration that may result in shorter-lasting flowers. Under-watering symptoms include rapid flower loss and dry, sunken leaves; these issues are usually due to either forgetfulness, too much sunlight or too much heat. Over-watering symptoms include rotting lower leaves, yellowing leaves, a loss of buds or flowers, and root rot. Allow the majority of the soil to dry out in between waters, preventing a pool of standing water from accumulating beneath the pot.

Average room humidity is acceptable for a Goldfish Plant, as too high humidity and poor air circulation will result in powdery mildew. Do not mist the flowers as this will cause botrytis petal blight that can spread quickly if not dealt with accordingly. Never situate this plant within three metres of an operating radiator as it will cook both the plant and the surrounding air moisture.

Feed fortnightly in the growing period and monthly for the rest of the year, using a houseplant-labelled fertiliser or Gesneriad-labelled product. Never over-fertilise the plant as a build-up of salts and chemicals can burn the roots, causing stunted growth and yellow leaves over time.

While the specimen is budding or in bloom, switch to a product high in potassium to prolong the flowers' duration. Good examples of this are a Dibley's 'Streptocarpus Food' or a tomato-labelled feed. Revert to the original fertiliser once the final inflorescence elapses.

Trying to re-bloom a Goldfish Plant is relatively easy, with those who have a cool room without artificial light at night being on the upper-hand. Repotting isn't usually mandatory if you want it to re-bloom - in fact, this may hurt the chances. Only repot every two to three years and after the flowers have elapsed. To get it to bloom during the summer months, think back to its previous dormancy period served in the autumn and winter. The ukhouseplants' acronym, SHORT, will help you through this process.

The following steps should be done in the autumn and winter when Goldfish Plants enter their dormancy.

Be sure to provide a bright location with little to no direct sunlight. Although the winter rays won't necessarily hurt the plant, you can easily fall in the trap of sun-scorch and severe dehydration.

For the specimen to fully become seasoned, avoid the use of artificial lighting or locations that boast temperatures higher than 18℃  (64℉).

Reduce waters so that about half of the soil becomes dry. It's essential to keep them on the drier side to life, as they'll think that hard times are ahead and therefore will need to pass its genes on to the next generation.

While in bloom, use a Tomato fertiliser to provide fortnightly nourishment of potassium. During its dormancy, supplement using a houseplant or Gesneriad-labelled fertiliser at monthly intervals to promote better health over the darker days and cooler nights.

This is the most significant step; reduce the temperature down by around 5℃ compared to the summertime or place in a room that's around 15℃  (59℉). The drop in temperature should ideally last until the inflorescence finishes blooming, although it can still be transferred into the main house as long as it sits on a pebble tray. You'll be at a significant disadvantage if the ambient temperature is kept constant throughout the year, as Goldfish Plants will only respond with flowers in cooled environments. Never exceed the minimum temperature as it could lead to plant death or yellowed foliage at a bare minimum.

Under-watering is a big issue when it comes to these plants. Typical signs of this include wilting, sunken leaves, rapid flower or bud drop and stunted growth. Those situated in direct sunlight or within four metres of a radiator are more likely to suffer from under-watering related issues. If yours doesn't hang on a hook, introduce a pebble tray to maintain higher humidity and slow the rates of drying soil. You can even create a watering rota to help reduce the risk of under-watering and forgetfulness.

Too much sunlight will lead to sun scorch, with typical signs including browning or crispy leaves, dry leaf-edges, sunken leaves or stunted growth. Although too little light will cause over-watering issues, too much sunlight will also be a detriment. Unfortunately, indoor Goldfish Plants cannot tolerate more than two hours of direct sunlight a day, unlike their outdoor counterparts. If yours has fallen short of this, reduce the amount of direct light considerably and always be mindful of environmental shock (when two locations offer too different growing conditions). Remove some of the affected leaves and increase waters slightly.

As mentioned before, powdery mildew and botrytis are minor threats among heavy foliage plants due to the compact nature that aids the spread of the diseases. Watering above the foliage will allow excess moisture to sit in the cubbyholes of the stem, enticing harmful bacteria to thrive. Remove the affected areas and improve the growing conditions by situating the plant in a brighter location. Avoid watering through the foliage if these problems persist.

Never situate a Goldfish Plant in more than two hours of direct sunlight or within four metres of an operating heat source, for instance, a radiator or fireplace. Due to the high temperature, the plant will soak up far more moisture than those situated in cooler locations, increasing the chance of droughts and inevitable death. This species cannot cope with persistent dry soil; you're skating on thin ice if a Goldfish Plant starts to wilt.

Sudden flower loss can be caused by an array of different issues, including a change in location, too little hydration, too hot or cold temperatures or droughts and pests. Whilst the plant is in bloom, keep the soil evenly moist, to hydrate the thirsty work of producing flowers. Locations that are outside of the recommended temperature bracket, or have drastic fluctuations must also be kept off the cards, as Goldfish Plants can be susceptible to the ambient warmth that they're situated in. The final issue could be to do with pests. Although it's improbable that an infestation will cause a sudden change in health, have a quick inspection for Whitefly, Aphids and Mealybugs.

Columnea was first described by Carl Linnaeus in 1753, honouring Italian botanist, Fabio Colonna. There are over two hundred species across its genus, ranging from Mexico to Tropical Asia. The most popular indoor species, C. arguta, was first penned by Conrad Vernon Morton in the early 1940s, who used the Latin word for tooth-shaped, argutifolius, to denote its leaves. A second species, Columnea × banksii, is beginning to become popular in Europe, which has purple foliage and yellow flowers. It was named in honour of Joseph Banks, who was a British explorer and naturalist in the 18th century. 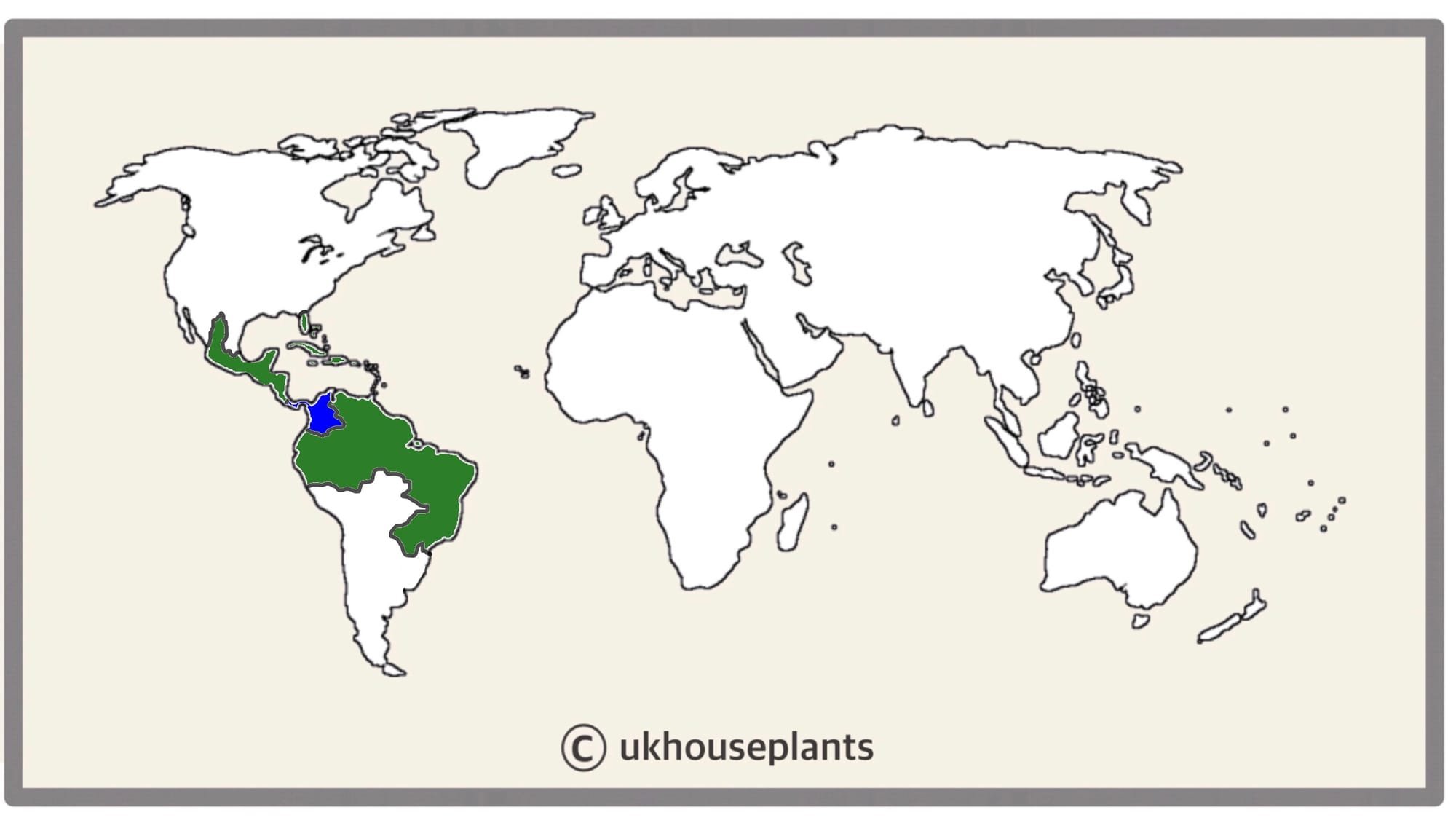 The Distribution of Columnea in Green & C. arguta in Blue.

10° - 25°C   (50° - 78°F)
H1c (Hardiness Zone 11) - Can be grown outdoors between late spring and summer throughout most of the UK while nighttime temperatures are above 10℃  (50℉).  If you decide to bring the plant outdoors, don't allow it to endure more than an hour of direct sunlight a day as it may result in sun-scorch. Regularly keep an eye out for pests, especially when re-introducing back indoors.

Remove yellow or dying leaves, and plant debris to encourage better-growing conditions. While pruning, always use clean utensils or shears to reduce the chance of bacterial and fungal diseases. Never cut through yellowed tissue as this may cause further damage in the likes of diseases or bacterial infections. Pruning is recommended in the early spring to promote a more bushy appearance and the stimulation of potential flowers for the summer months.

Goldfish Plants will put out flowers during the summer that can last several weeks. The shape of the flowers mostly resembles an orange goldfish, which is thanks to the developing buds. Supplement using a potassium-based feed during the start of spring to encourage the chance of flowers; Streptocarpus-labelled feed is an excellent choice as it holds an ideal blend of both nitrogen (foliar growth) and potassium for flower development. If you have a Columnea × banksii or Columnea gloriosa, you'll receive orange-yellow flowers during the summer months that'll last several weeks once opened.

Repot every three years in spring using a 'Houseplant' labelled potting mix and the next sized pot with adequate drainage. Goldfish Plants are far better potbound for several years due to the heightened risk of root rot and repotting-issues (like transplant shock), so only repot if you feel it's wholly necessary - restricted root growth will also increase the chance of blooms, too.

Keep an eye out for whitefly, spider mites, thrips, aphids & mealybugs. Common diseases with Goldfish Plants are root or crown rot, powdery mildew, leaf-spot disease, botrytis petal blight and powdery mildew. For more info on how to address any of these issues, hit this link - Identifying Common Houseplant Viruses & Diseases.