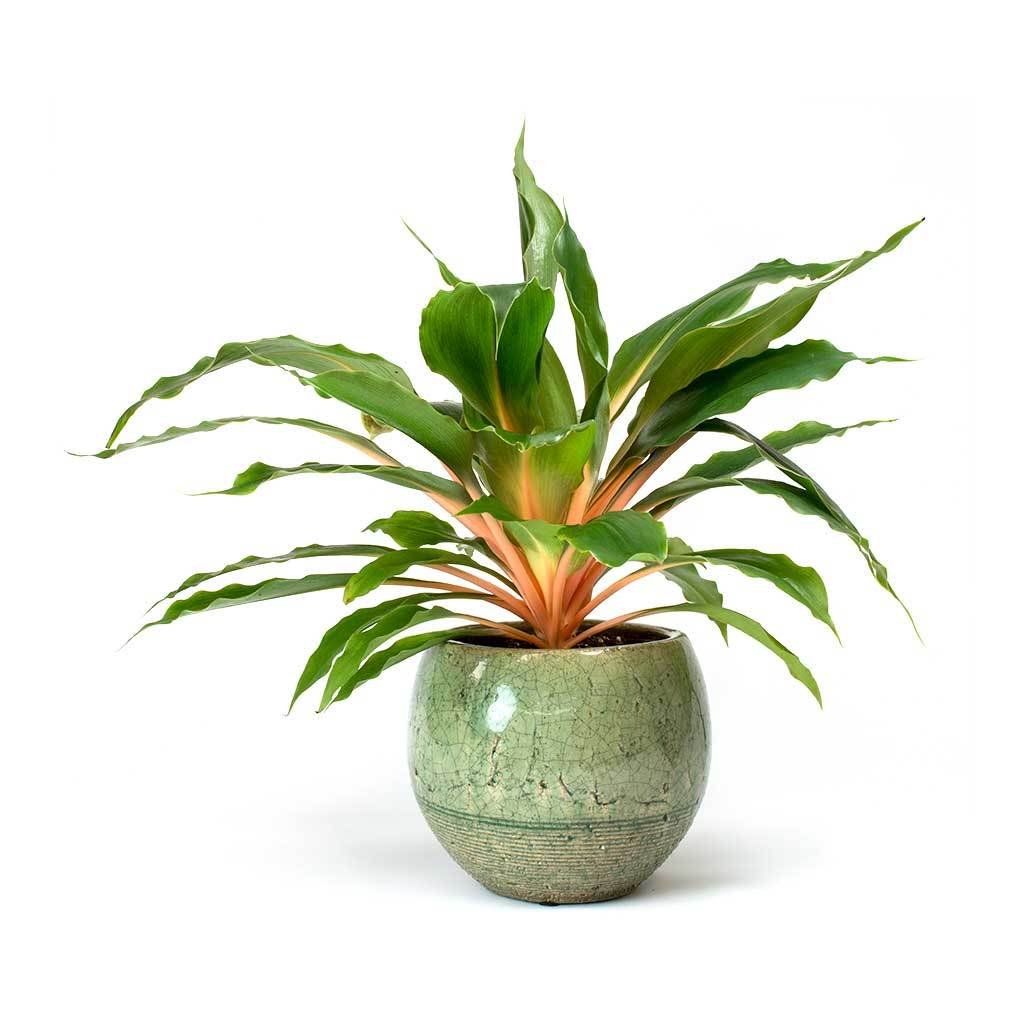 Are you struggling to find the answer to your specific plant issue? Book a 1-to-1 video call with Joe Bagley, the website's friendly author, to overcome and address your niggling problem! Available on iMessage, WhatsApp, Facebook Messenger & more.

A bright, indirect site is best for this specimen, as shady environments may lead to soil mould and slowed growth. Although the risk of sun-scorch is high with sun-filled locations, a location that offers up to two hours of morning or evening sunlight is acceptable, as long as the specimen is kept moist. Never situate this plant in all-day sunlight due to the risk of foliage decline and plant death.

Allow the compost's top third to dry out in between waters in the growing period, reducing this slightly further in the autumn and winter. Under-watering symptoms include a sudden loss of older foliage, yellowed or crispy foliage & stunted growth, whereas over-watering symptoms including a weakened or rotten stem, no new growth, yellowing lower leaves and eventual plant death. Click here to learn more about root rot and how to address it!

Chlorophytum orchidastrum are prized for their tolerance of dry air, which means that average room humidity is more than enough to satisfy them. Never situate one within a few metres of an operating radiator due to the enriched chance of browning leaf-tips. If you have issues of under-watering, we'd recommend introducing a pebble tray to keep the surrounding environment moist, which indirectly will slow the rates of drying soil, too!

Feed with a 'Houseplant' labelled fertiliser every four waters for the development of better quality foliage. Although a 'General Plant' fertiliser is acceptable, you'll run the risk of burning the roots if over-applied, especially with the combination of a 'ready-to-use' (RTU) product and dry soil. We'd recommend BabyBio or Miracle-Gro as good products to use!

An array of simultaneous cultivation issues will increase the chance of developing yellowed leaf-sections with browned halos - see image below for visual reference. Firstly, the location may be too dark, with its compost staying too saturated in-between waters; if mould is growing across the soil, this is usually a bad sign. Further, you're potentially using too cold water or tap water that hasn't been allowed to sit for 24hrs. This period of rest will not only bunk-up its temperature, but the harsh chemicals used to preserve water hygiene (fluoride & chloride) will begin to alleviate after a few hours. If possible, use fresh bottled water from a shop or supermarket to prevent further chemical burns. The final culprit might be lack of fertilisation, with regular feeds being paramount for long-lasting, healthy leaves. If the specimen hasn't been nourished in over two months, it'll begin to show signs of nutrient deficiencies seen in this article.
If this common problem has occurred with your specimen, remove the affected leaves (not sections on the leaf) and improve the growing conditions considerably. Fertilise regularly with lukewarm water and be sure to allow the top third to dry out in between hydrations. Its new growth should be problem-free, but if you'd like to speak to ukhouseplants for more advice, don't be afraid to book a call with Joe via this link. 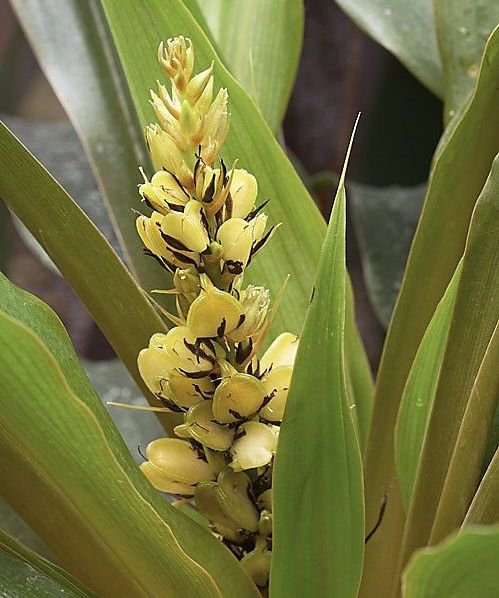 Chlorophytum orchidastrum has natural distributions across central Africa, ranging from The Gambia in the west to Zambia in the south. It was first described by John Lindley in 1824, using the Latin specific epithet of 'orchidastrum' in reference to the star-like flowers that'll produce ball-shaped seedpods two months after pollination. 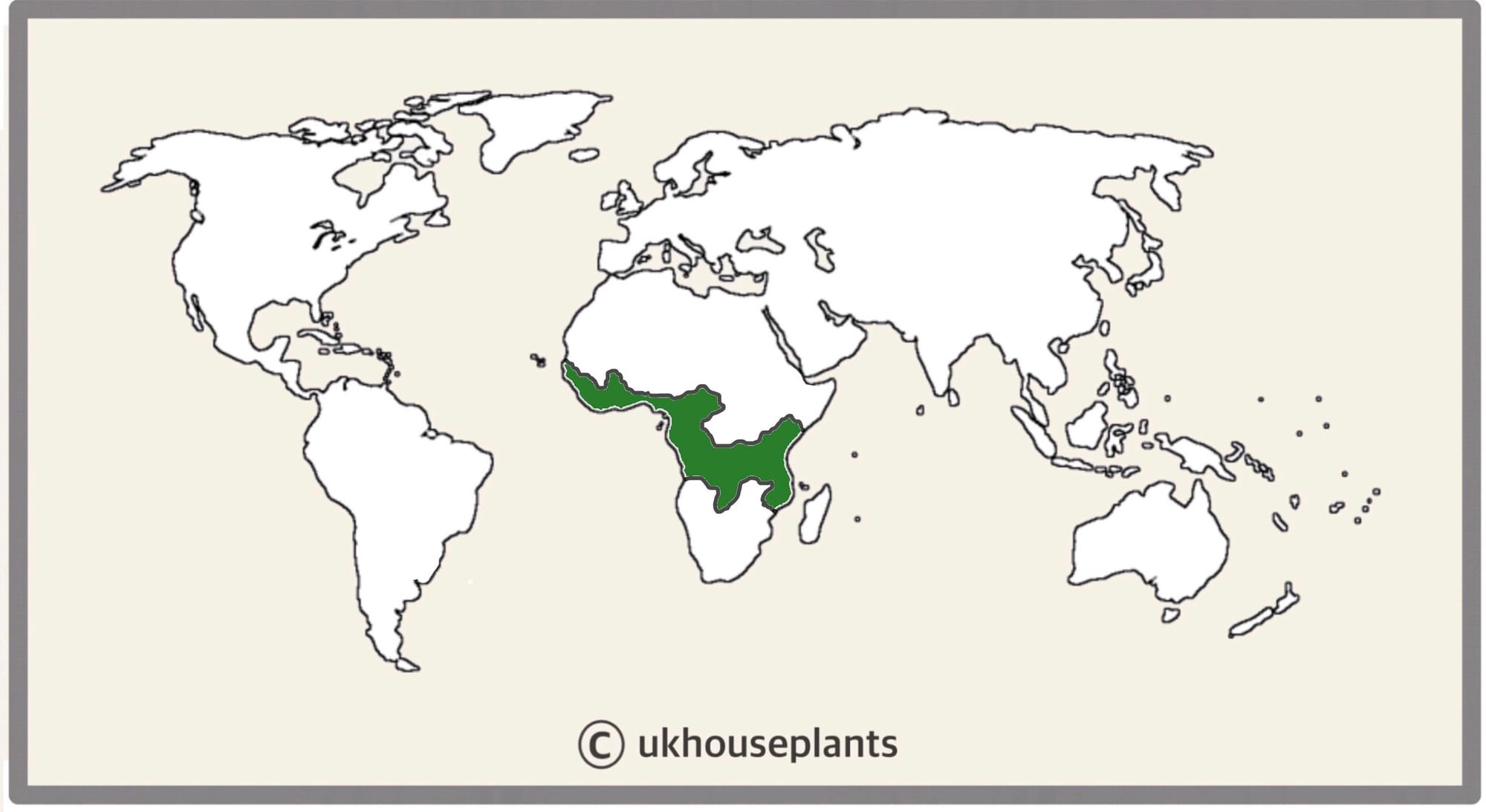 The Distribution of Chlorophytum orchidastrum.

12° - 32℃   (54° - 90℉)
H1b  (Hardiness Zone 12)  - Can be grown outdoors during the spring and summer in a sheltered location whilst nighttime temperatures are above 12℃  (54℉),  but is fine to remain indoors, too. If you decide to bring this plant outdoors, don't allow it to endure more than an hour of direct sunlight a day as it may result in sun-scorch. Regularly keep an eye out for pests, especially when re-introducing it back indoors.

The overall size can be up to 0.5m (1.7ft) in height and width. The ultimate size will take between 5 - 10 years to achieve when repotted biannually, with several new leaves developing per season.

Remove yellow or dying leaves, and plant debris to encourage better-growing conditions. While pruning, always use clean scissors or shears to reduce the chance of bacterial and fungal diseases. Remember to make clean incisions as too-damaged wounds may shock the plant, causing weakened growth and a decline in health.

Basal Offset Division (Easy) - Separating the basal offsets into their own pot will not only expand your plant collection, but it'll also slow the process of becoming pot bound. The best time to divide is during the spring period while repotting, with the pup's height surpassing a quarter of the mother's size. Gently brush away some of the soil to gain better access to the pup's base (lower stem) where the roots will be housed. While using a clean pair of secateurs or scissors, cut the stem with at least two root strands attached to its base. Set the pup in an appropriate-sized pot with adequate drainage and a 'Houseplant' labelled compost. The ideal location would provide bright, indirect light and temperatures above 15℃ (59℉). Maintain evenly moist soil, allowing the top third to dry out in between hydrations. After a month or two, treat it like a matured specimen by using the care tips mentioned above!

This species of Spider Flowers will flower from late spring onwards, producing many small white flowers along a 20cm shaft. Each individual inflorescence will last several weeks once opened, with the overall show lasting two months.

Repot every two years in the spring, using a 'Houseplant' labelled potting mix and the next sized pot with adequate drainage. Chlorophytum orchidastrum are far better potbound for several years due to the heightened risk of root rot and repotting-issues (like transplant shock) - so only repot if you feel it's wholly necessary.

This plant is classified as non-poisonous, but if large quantities of the plant are eaten, vomiting, nausea and a loss of appetite could occur.