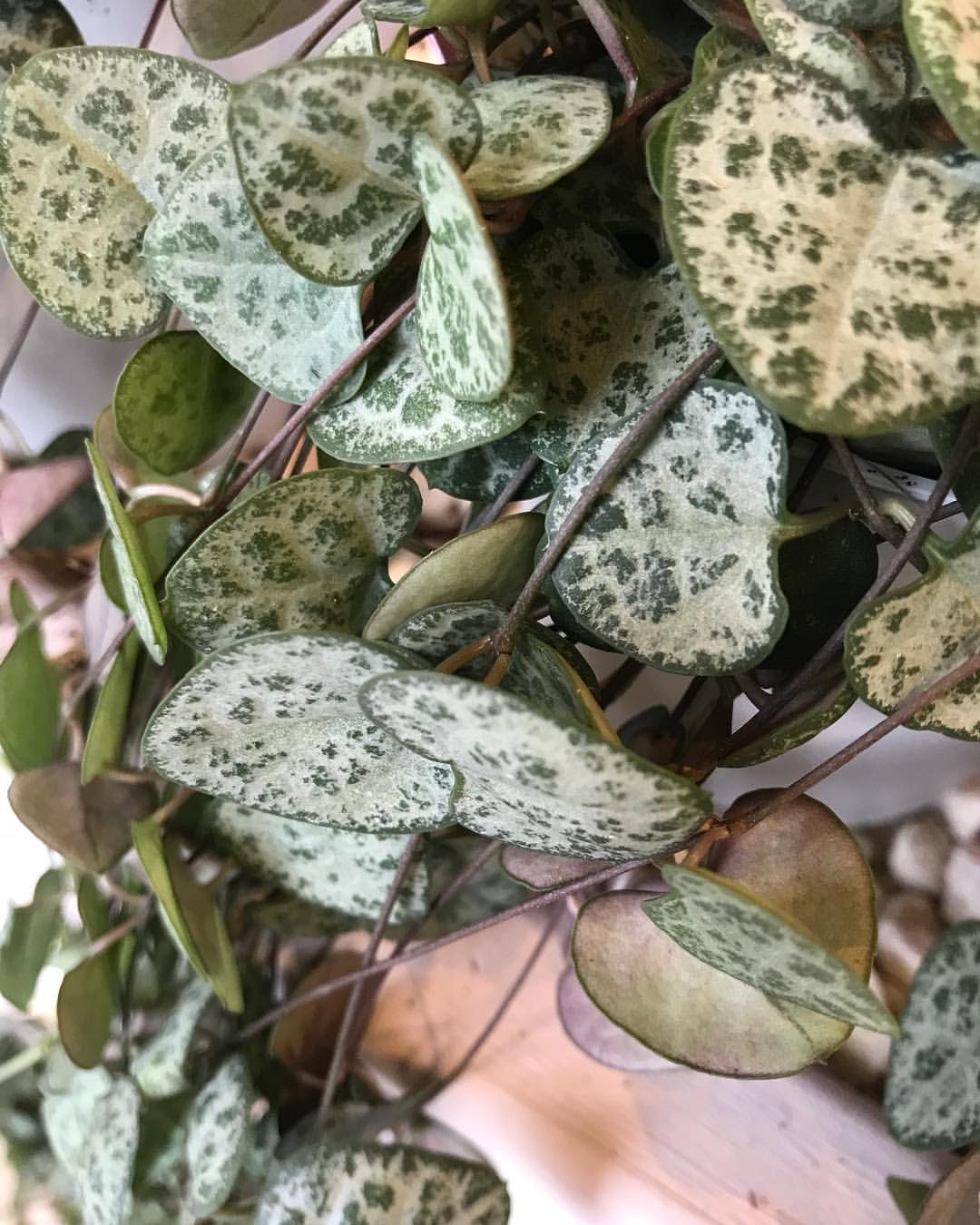 Chain of Hearts, or COH, must endure dry soil in between hydrations. Once the majority of the soil dries out, give it another good water, keeping the foliage as dry as possible. Either water from the top (albeit carefully), or submerge the bottom quarter of the pot for several in a saucer of water. If any excess moisture is allowed to settle on the leaves sitting above the soil, it could cause them to yellow and rot away. If this has occurred, place stem cuttings onto the soil after several weeks of good root growth in water. Scroll to the 'Propagation' section for more information on this. Under-watering symptoms include crispy or curling leaves, little to no growth and gradual foliage decline. Be sure to study its environment; a position that offers too much sunlight will dry out the soil quickly, eventually leading to sun-scorch and dehydration. Over-watering symptoms include rapidly yellowing leaves, wilting, mushy leaves or stem, basal rot, and plant death. Again, study where it's situated in your home and increase the amount of light, so that it receives splash of either morning or evening sun.

This isn’t a factor; however, a quick hose down from time to time will wash away dust particles and unwanted pests.

Although a location that offers indirect light is best, providing a splash of morning sun is highly beneficial, especially during the winter. A location that offers little or no light should be avoided as over-watering will lead to the rotting of foliage and VERY leggy growth.

In terms of a location around the house, either a few metres within a windowsill or beneath sky-light lighting is best. Avoid placing COH in a north-facing room during the winter.

Once a month, all year round using half-strength general plant fertiliser, cactus feed or houseplant food. Be sure to pre-water the soil before using a 'ready to pour' fertiliser, for the prevention of root-burning.

Common Issues with Chain of Hearts

Yellowing leaves or a naked base are products of excess moisture being allowed to sit on the foliage, commonly sped up by too little light or poor air circulation. Although watering from the top is best, it's recommended to use the bottom-up method if you're a messy waterer. For specimens that have a bare head, improve growing contains by using this method and increasing light levels slightly. Promote a bushier appearance by taking vine cuttings and placing them halfway down into the soil, after a few weeks of root development in water. Always remove yellowed or rotten debris off the soil, as this could harbour both bacterial and fungal diseases.

Ceropegia Woodii is a epiphytic and lithophytic species (grows on trees or rocks) that was discovered in 1881 by John Wood, during a visit to South Africa. Live specimens were sent to Kew Gardens in 1894 which flowered shortly later, resulting in its formal classification. The name, Ceropegia, derives from the ancient Greek words for 'wax' and 'fountains', which is in reference to Carl Linnaeus' initial observation of the genus (not species) back in 1753.

10° - 30°C   (50° - 86°F)
H1b - can be grown outdoors in spring and summer in a sheltered location, once the nighttime temperatures are above 10°C. If you decide to bring it outdoors, do not allow it to endure more than an hour or two of direct sunlight a day as this could burn the leaves. Regularly keep an eye out for pests, most notably being Aphids on the new growth.

Via seed or vine cuttings. To learn about the essentials with sowing seeds, be sure to click on this link - Seed Propagation Tips. 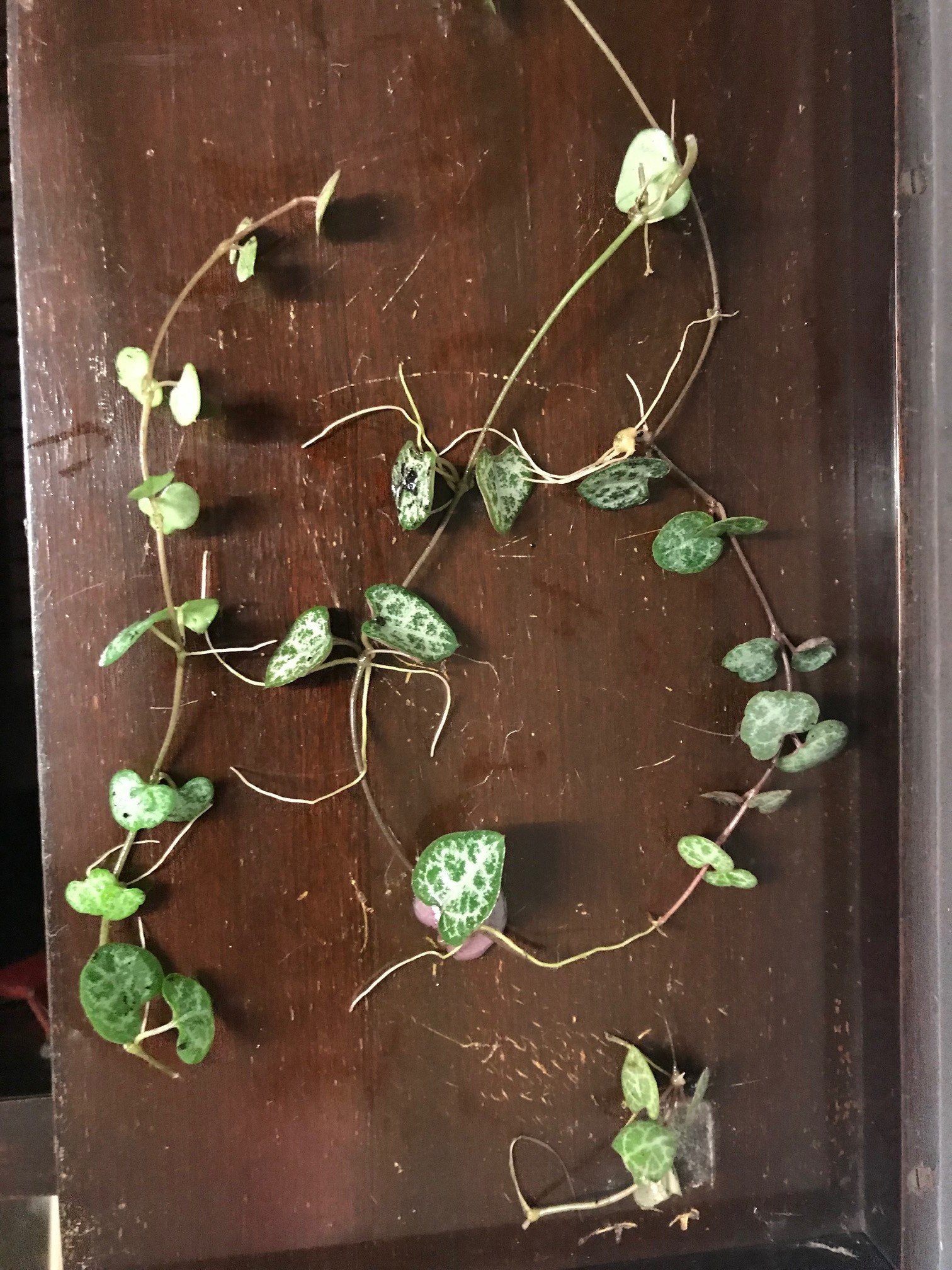 During the spring, COH will produce small clusters of white flowers along the leading growths, lasting up to a week once opened. To aid the chance of a spring bloom, reduce the amount of waters considerably, and dip the nighttime temperatures to around 12⁰C  (54⁰F)  in the winter months. The combination of drying soil, shorter days and cold nights will give the plant a dormancy period, which is vital for flower growth in the following season.

During the spring, repot every three years using Houseplant Compost and the next sized up pot. Water the plant's soil 24hrs before the repot, as damage to the dry root hairs will cause transplant shock. For matured specimens, introduce more grit to promote a stronger root ball; click on this link for more information on how to perform the perfect transplant.

Typical diseases associated with COH are leaf-spot disease, botrytis, powdery mildew & root rot. Keep an eye out for spider mites, mealybugs, aphids, whitefly, root mealybugs, scale & thrips. Click here for more information about how to identify and address any of these issues.

This plant is classified as poisonous. due to varying concentrations of calcium oxalate crystals found around the plants body. If parts of the plants are eaten, vomiting, nausea and a loss of appetite could occur. Consumption of large quantities must be dealt with quickly; acquire medical assistance for further information.