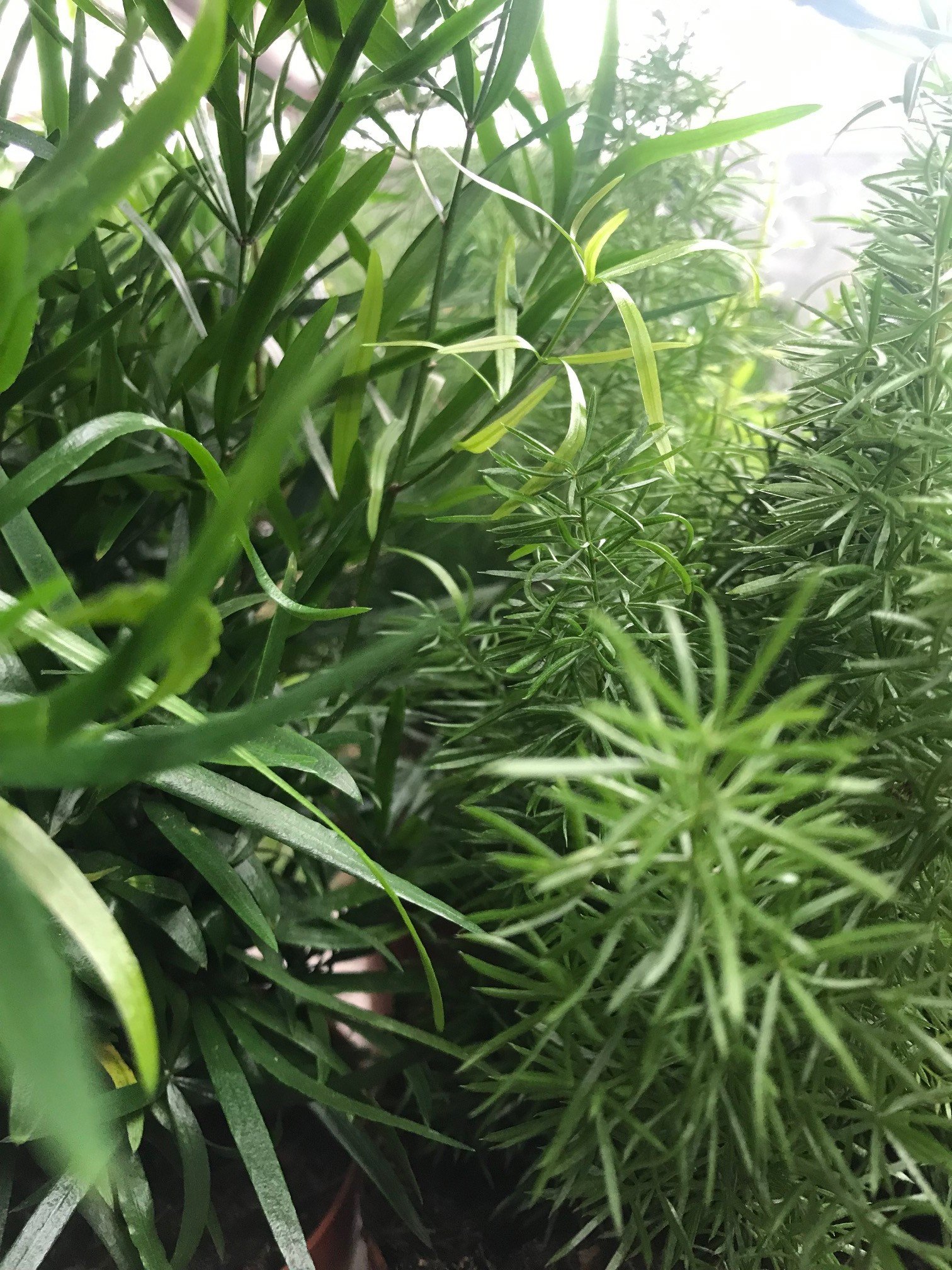 Provide a bright, indirect location for best results. Never place a specimen in more than two hours of direct sunlight a day, due to the risk of foliage bleaching. In the winter, Asparagus Ferns can be situated in areas that provide a splash of morning sunlight, which in turn will reduce the risk of soil mould and root rot over this crucial period.

Avoid placing it within three metres of a south-facing window or operating radiators to prevent falling in the trap of persistent droughts.

During the growing period, allow the soil's top third to dry out in between waters to dehydration. Persistent droughts will result in yellowed fronds that'll quickly shed its needles, resulting in a weakened, naked plant. Other under-watering symptoms include stunted growth and rapid needle loss; these issues are typically caused by intense sunlight or heat, being potbound or pure forgetfulness. If you're a constant under-waterer, consider relocating the plant to a slightly darker area to slow the drying of the soil. Over-watering, on the other hand, will lead to root or tuber rot, yellowing fronds and a decline of health. If mould begins to develop on the compost's surface, it could be the product of too much soil moisture and not enough light or air circulation. 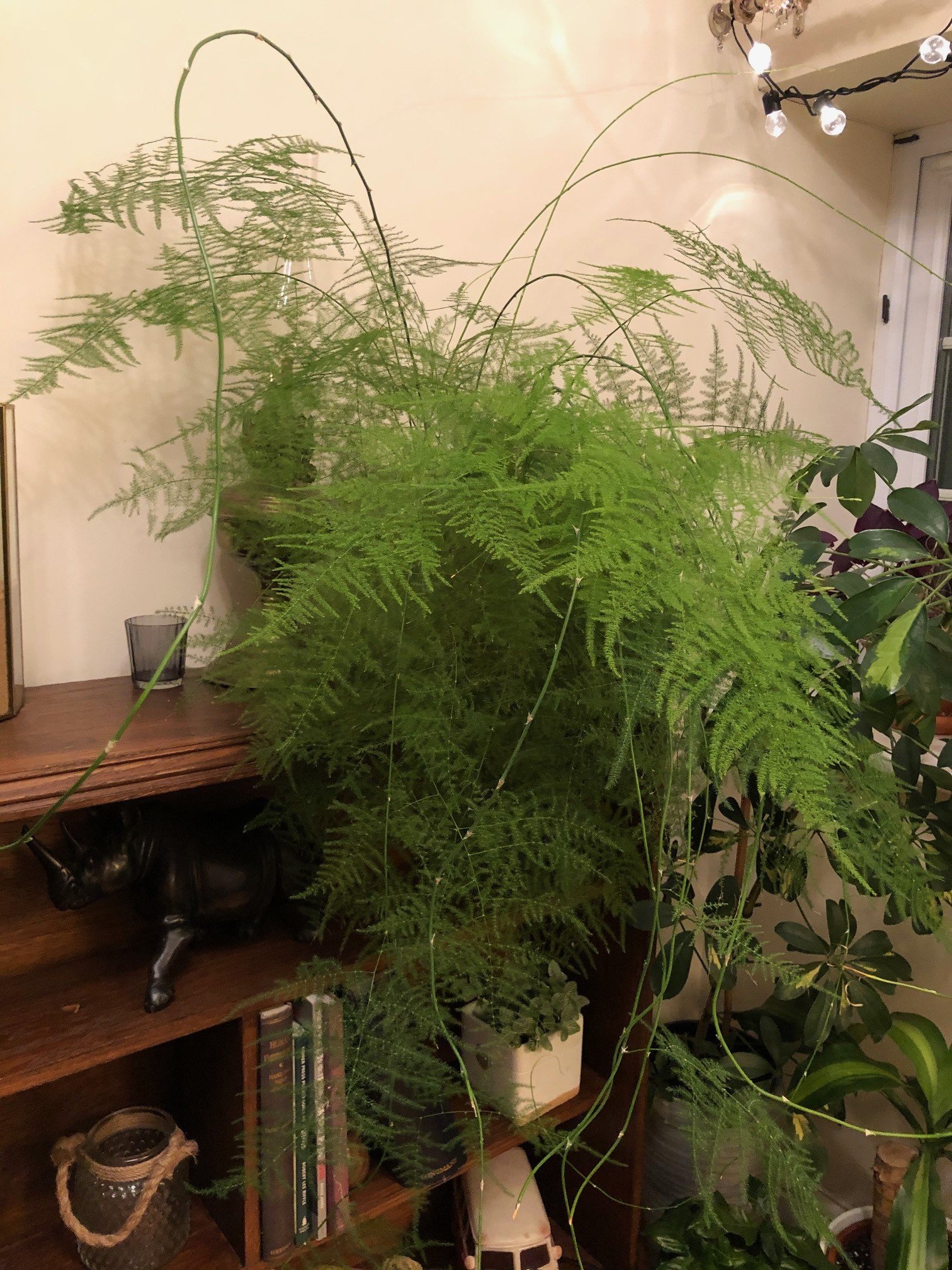 Expect a specimen of this size after six years, with new growths emerging from its base and pre-existing cladophylls (fronds).

Yellow needles or fronds are a clear sign of dehydration, commonly caused by either intense sunlight or persistent droughts. Although the damaged foliage won't rejuvenate, new growth will quickly appear at the soil line if the growing conditions are improved. Avoid more than two hours of direct sunlight a day and allow the soil's top third to become dry in between waters. If all of the foliage has become yellow, read the following section.

When a fern is severely dehydrated, most of its needles will yellow and drop off. Although it may spell the end of juvenile plantlets, there may still be light at the end of the tunnel for more established specimens. If the stems and leaves are thoroughly crisp, prune the stems to around an inch from the tuber's surface (potato-like attributes) and contain the plant (with its pot) in a transparent bag that has small holes. Keep the soil continually moist, providing a good level of indirect light and temperatures above 15°C (59°F). After a few weeks, new stems should develop from the tuber, signalling the start of its recovery process. Maintain a sealed environment for the following month until you feel it's necessary to release it back into the open air. For the prevention of environmental shock, be sure to introduce a humidity tray for higher levels of atmospheric moisture around the plant in its new setting. Not only will this ease the specimen back into healthy functioning life, but it'll also reduce the rate of transpiration (water-loss in the needles), and therefore downplay the risk of dehydration and further decline.

Browning needles are also the direct product of dehydration, but it could also be caused by dry air. Situating an Asparagus Fern within a few metres of an operating radiator should be avoided at all costs; introduce a pebble/humidity tray to maintain a stable and moist air.

Root rot is a common issue among specimens sat in too dark environments with prolonged soil moisture. Symptoms include rapidly yellowing leaves, stunted growth and a rotten brown base. Take the plant out of the pot and inspect health below the soil line. If the roots sport a yellow tinge, you're good to go, but if they're brown and mushy, action must be taken immediately. More information about addressing root rot can be found on this link. 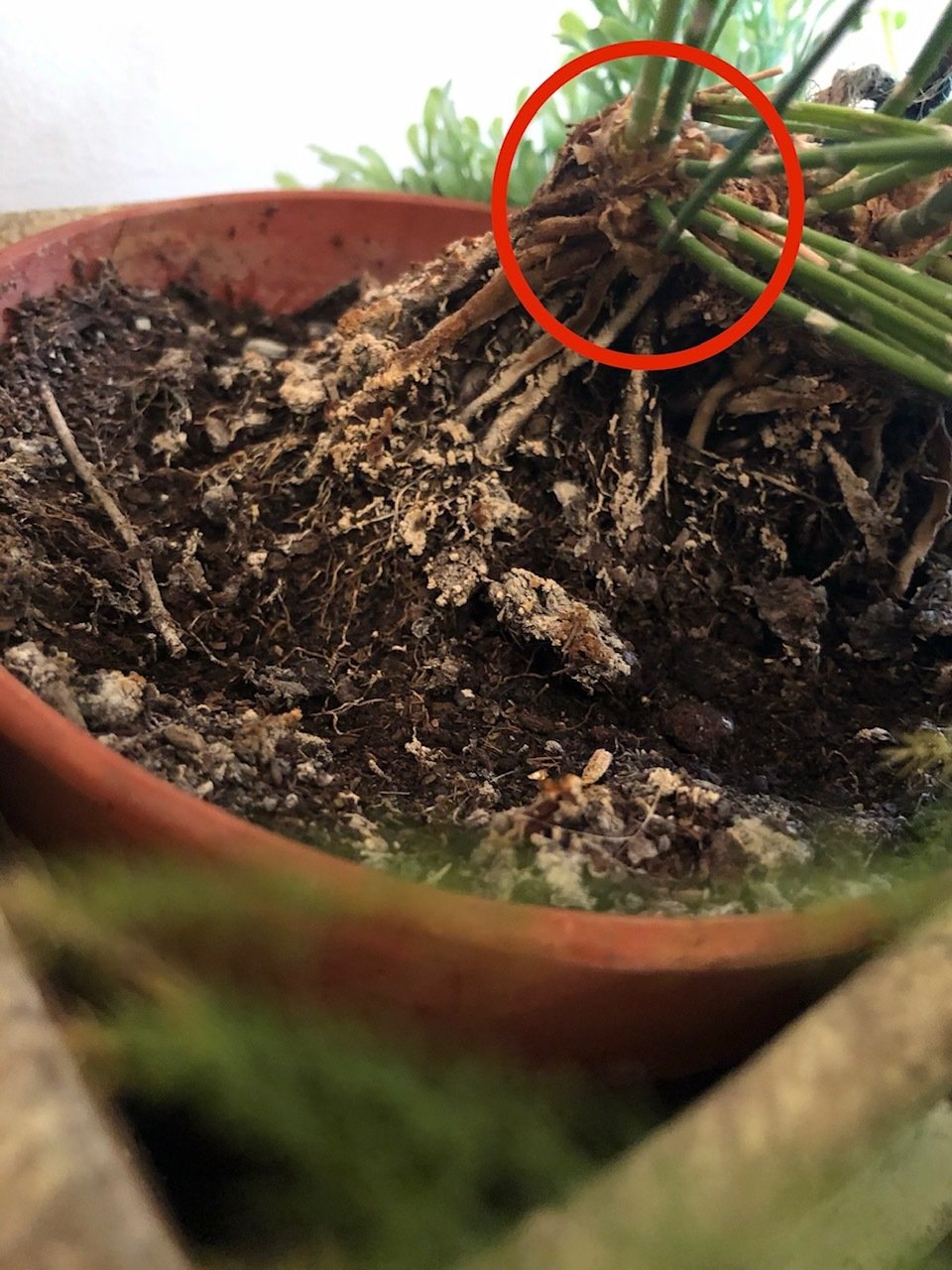 Asparagus Fern tubers are modified storage organs that house both its stems and roots (circled). Although soil mould is completely harmless, it's considered unsightly to most gardeners. It is the direct product of too little light and excess soil moisture with poor air circulation.

The genus, Asparagus, was first described by Carl Linnaeus in 1767, with its natural distributions across coastal regions of southern Africa. Its nickname, Sprenger's Asparagus Fern, was named after Carl Ludwig Sprenger, a German botanist who introduced the genus to European markets back in the late 19th century.

The Meaning of Species Names.

A. setaceus or Lace Fern (1966) - Refers to the 'bristle--like thorns that develop along the stems.

A. densiflorus (1966) - Refers to the tightly-compacted flowers.

A. plumosa (1875) - Refers to the feather-like cladophylls. Symomous of A. setaceus. 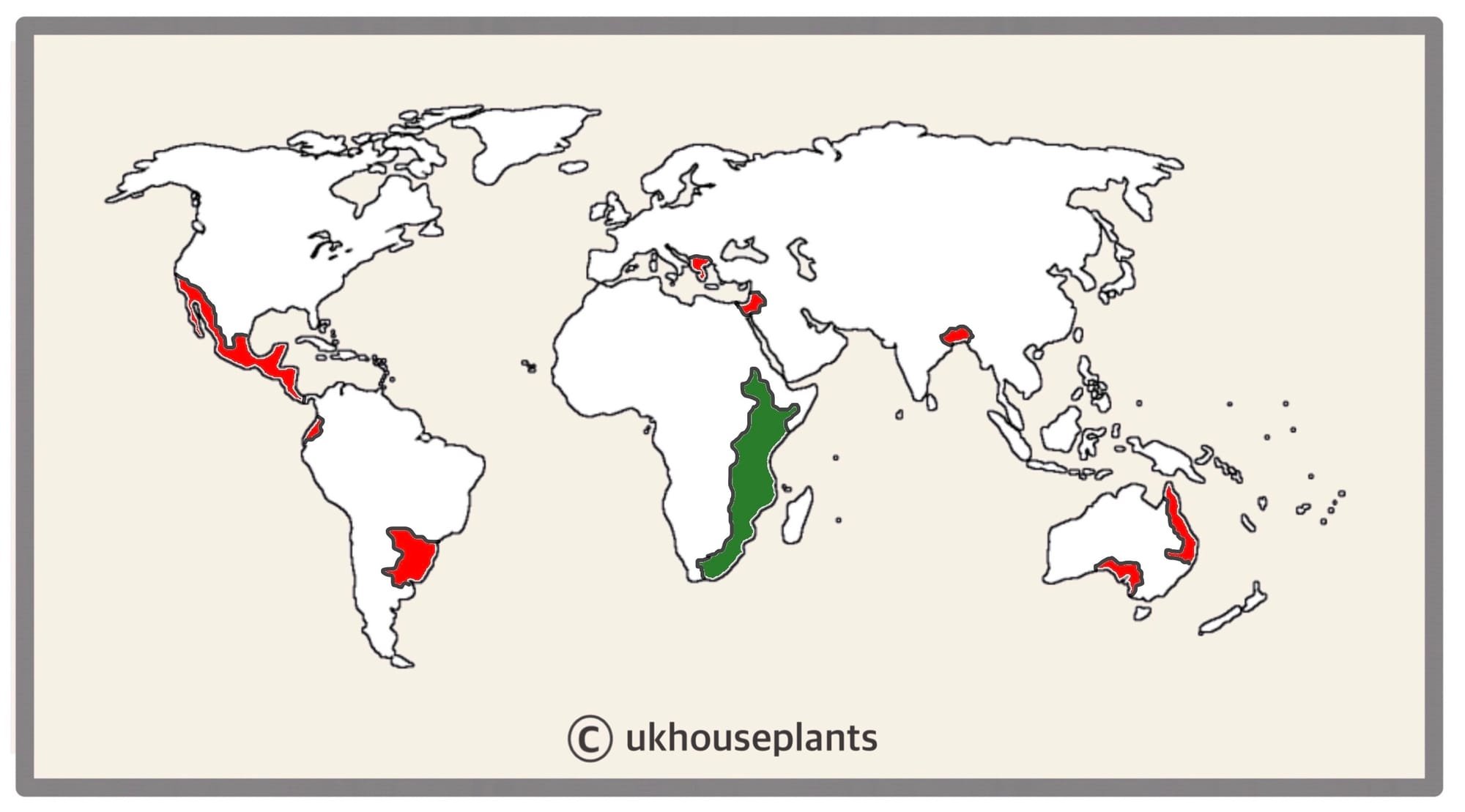 The distribution of Asparagus Ferns in Green, with artificial introduction highlighted in Red.
Temperature

12° - 26°C   (54° - 80°F)
H1b  (Hardiness Zone 12)  - Can be grown outdoors during the summer in a sheltered location with temperatures above 12℃  (54℉),  but is fine to remain indoors, too. If you decide to bring this plant outdoors, don't allow it to endure any direct sunlight as it may result in sun-scorch and dehydration. Regularly keep an eye out for pests, especially when re-introducing it back indoors.

Up to 1.5m in height & 1m in width. The ultimate height will take between 8 - 10 years to achieve, with several new stems produced per season from the tuberous base & cladophylls (fronds). 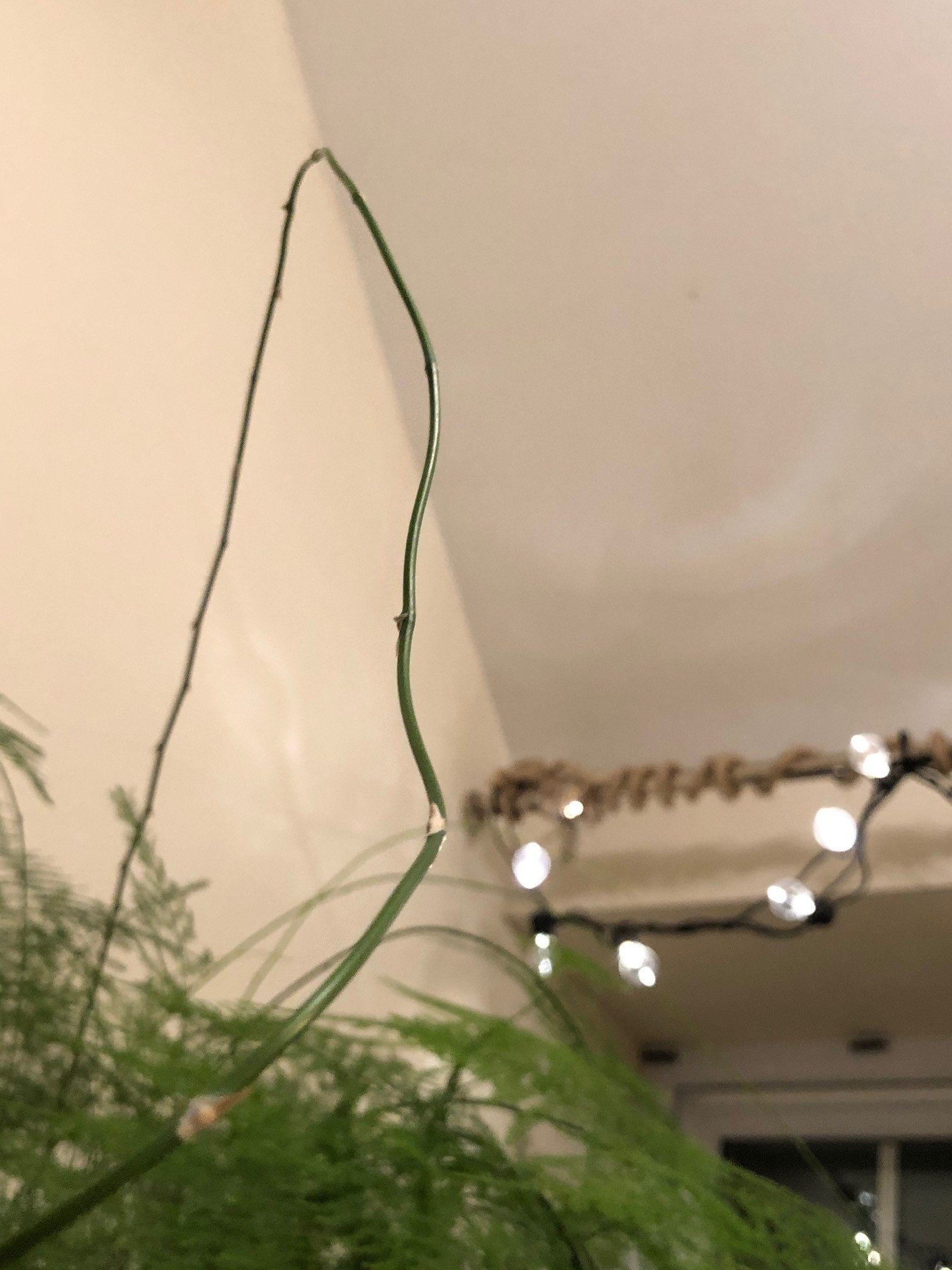 Asparagus Ferns will send out naked stems to search for the light; needle growths will develop along the nodes soon after.

Long, naked stems will develop (see image above) that'll start to die at the end. Only remove the yellowed tips once they become brown, which will in turn force the plant to send out needle growth from each thorn-node.

Via Seeds or Tuber Division.

Tuber Division - Your plant will produce several tuberous offsets (similar to potatoes) that can be separated once they have a sufficient root system, and surpass 2cm (0.8 inches) in diameter. Water the soil 24hrs before the main event to reduce the risk of transplant shock - when its dry root systems are over-fingered. Take the plant out of its pot and place your fingers close to the nodal junction between the two tubers - soil may have to be removed for better access. Push the chosen offset downwards until you hear a snap. Separate the foliage and its root system away from the mother plant, mentally noting the high risk of damage. Transplant in the appropriate sized pot with a fresh batch of 'Houseplant' soil. Maintain evenly moist soil and situate it in a bright, indirect location away from any direct sunlight. After six weeks, treat it like a standard specimen, following the care tips above!

It's rare for a domestically grown Asparagus Fern to bloom indoors due to the insufficient growing conditions. Out of the available species currently on the market, the A. densiflorus is mostly likely to flower in the spring. 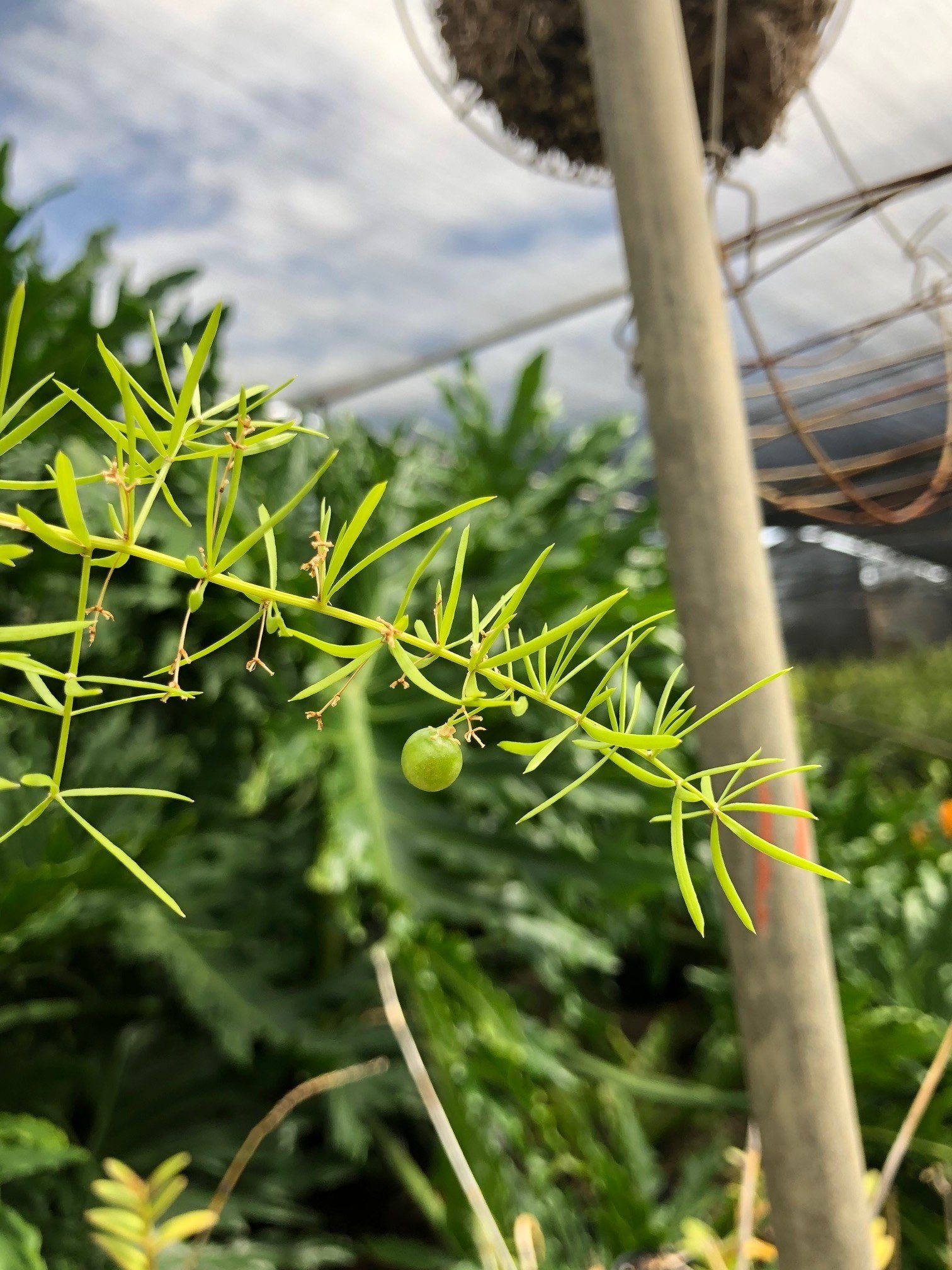 An unripe berry of the A. densiflorus.

Repot every two years in spring using a 'Houseplant' labelled compost and the next sized pot with adequate drainage. Hydrate the plant 24hrs before tinkering with the roots to prevent the risk of transplant shock. As the genus originates from temperate locations in Southern Africa, add a thin layer of small grit in the pot's base to improve drainage and strengthen the root's strength. Click here for a detailed step-by-step guide on transplantation, or via this link to learn about repotting with root rot.

Keep an eye out for aphids, spider mites, blackfly & root mealybugs that'll locate themselves in the cubbyholes and undersides of the leaves, with the exception of the latter in the soil. Common diseases associated with Asparagus Ferns are root rot, botrytis, rust, powdery mildew & southern blight - click here to learn more about these issues.

The plant itself isn't poisonous; however, sharp thorns will develop via the stems, potentially becoming a skin irritant to some individuals. Once matured, they'll also produce white flowers & red berries that are highly poisonous to both pets and humans if ingested.