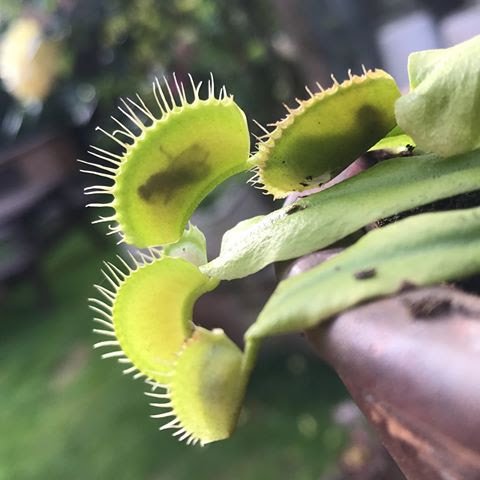 To get the most out your Venus Fly Trap and this article, learning about how a Trap functions is a great place to start. As their natural boggy habitats in North/South Carolina lack nitrogen and phosphorus, evolution has served them the ability to catch and digest small insects to compensate for the deficiencies. Two trichomes (little hairs located on the inside of the Traps) must be activated within twenty seconds for its mechanism to perform. If the plant doesn't detect any prey shortly after closure, it will reopen, using none of its stored enzymes to conserve energy. If the catch is successful, it'll typically take just under ten days for complete digestion, before fully reopening, revealing the victim's exoskeleton.

As the species originates from nutrient-deficient bogs, the natural sunlight and insects are its only source of nourishment. With this in mind, provide a location that offers a few hours of morning or evening sunlight. Too-dark settings will result in slower growth and gradual decline - if it's too dark to read a newspaper, it'll be too dark for the plant!

Situate the individual outdoors in a sheltered location once the nighttime temperatures surface above 10⁰C (50⁰F) to catch its prey. A short spell outside will significantly improve the overall health, as well as weakened or dying specimens making a near-full recovery. Maintain evenly moist soil and return indoors once the temperatures dip below this threshold.

Provide moist soil throughout the year, especially in the growing months. Never pour water directly into their Traps, as although the plant has evolved to distinguish the difference between rain droplets and insects, it still could cause the Traps to close, thus wasting vital energy. Under-watering symptoms include stunted or deformed growth and rapidly declining crispy leaves. Do NOT promote droughts of any duration due to the species' reduced ability to withstand dry periods. Over-watering symptoms are a rotting crown and yellow or brown older leaves - these issues are usually typical for plants grown in too dark locations, or too low temperatures.

Humidity needs to be at the forefront of a happy specimen. Although moist soil will provide a portion of the surrounding moisture, be sure to mist once or twice a week for additional goodness. An easy way to provide a humid setting without the need for continual misting is to introduce a humidity tray. Not only will it save you time and effort, but it will also keep moisture-related diseases at bay with a more reliable environment.

Many people panic over what to feed their specimen. Natural prey like spiders, flies, mosquitoes and even slugs are the only food that they should digest. Never feed them cake, meat or stones as this will kill the individual Trap or even spell the end of the plant's life. Dead insects should be avoided too, as the trichomes can detect whether or not there's something inside it, and if the prey doesn’t move, digestion won't take place. The final point to mention is never to allow it to digest something bigger than one-third of the Trap's size; the lips won't be able to shut entirely, thus wasting vital energy in the process.

Keep the plant outside once the nighttime temperatures are above 10⁰C (50⁰F), for it to catch its own prey. There's nothing better for a carnivorous plant than to allow it to breathe, digest, and photosynthesise in the fresh outdoors without human intervention.

The final element for a long-lasting carnivorous plant is a vital resting period during the autumn and winter months. While keeping the soil moist, reduce insect-feeds to almost none, as in the wild airborne prey tend to be less in numbers during this time. Reduce the ambient temperature to around 12℃ (54℉) during the night to reinforce this critical period - even a cool windowsill will be sufficient enough. If the plant has a reasonable resting period, it should reward you with some white flowers in the early spring.

Too little light accompanied by water-logging will cause the lower leaves to rapidly yellow and rot. Although this is a natural response to ageing on a smaller extent, persistent yellowing and a near absence of foliage should only occur during the winter. If this is the case during the height of summer, action must be taken immediately. Place the Traps in a location that receives little direct sunlight out of peak hours, or outside if possible. Although it will take several weeks for the plant to start to recover, better-growing conditions with the occasional insect will significantly benefit its overall health. Other causes for yellowing leaves are sun-scorch or the use of a non-carnivorous potting mix. Venus Fly Traps must not be repotted into any other compost, as the chemicals will quickly lead to root-burn and inevitable death. 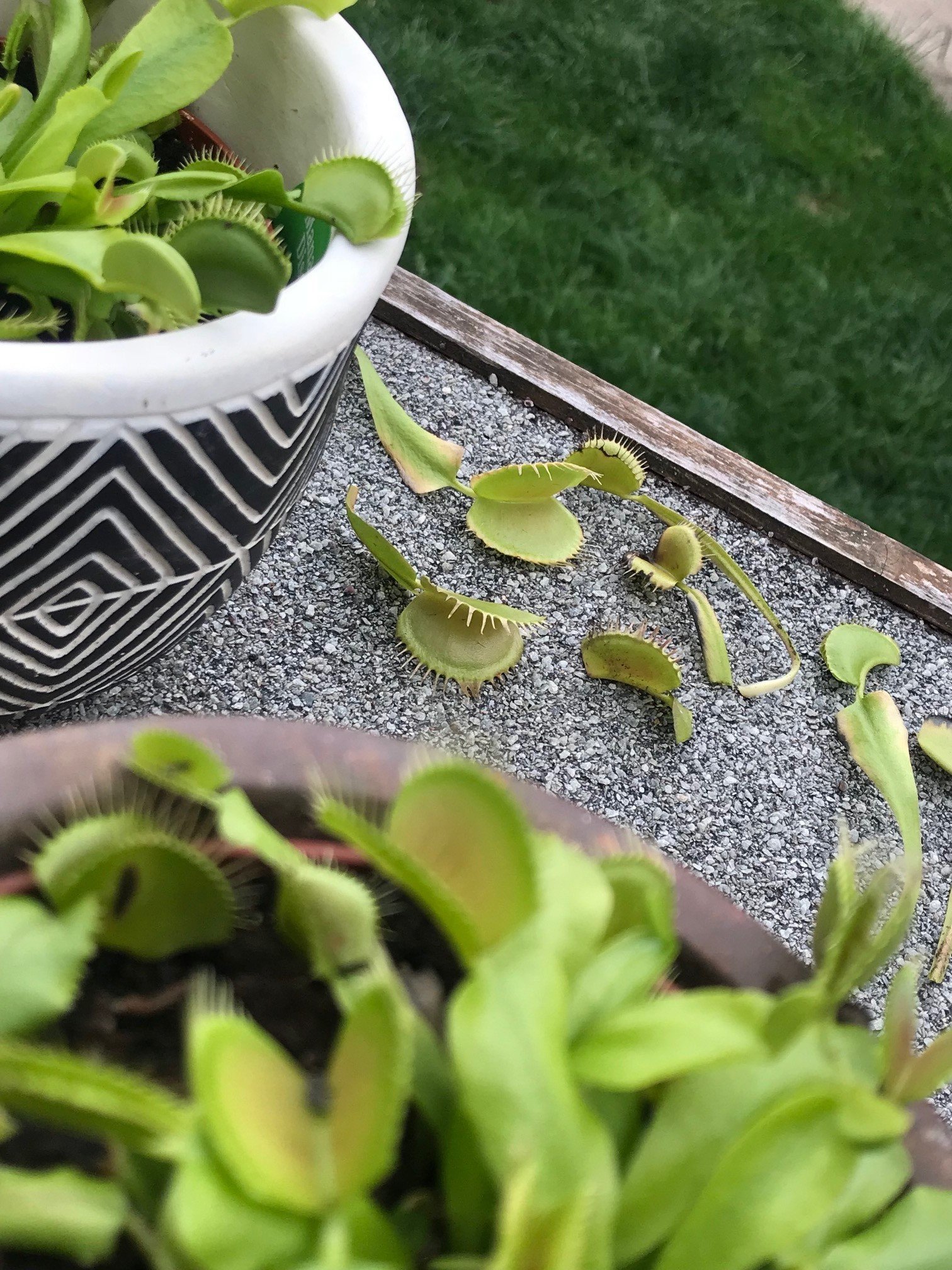 Aphids can wreak havoc with younger specimens if untreated. The neon-green critters will predominantly inhabit the flowers and stalks, leaving white casings on the foliage below. Initially, the plant won't show any signs of pest-damage; but after a while, small white shells will appear around the base of the plant, thus signalling the start of an infestation. For its eradication, spray garlic water onto the affected areas several times over the week's course. If the population's numbers don't reduce, repeat weekly or move onto chemical pesticide - remember to keep the plant away from other unaffected specimens to avoid the problem spreading.

Under-developed or deformed Traps are caused by persistent under-watering or too much sunlight. Dry soil must be avoided at all times for success as they grow naturally in bog climates across the Carolina states. After a few weeks of moist soil, better growth should start to develop. 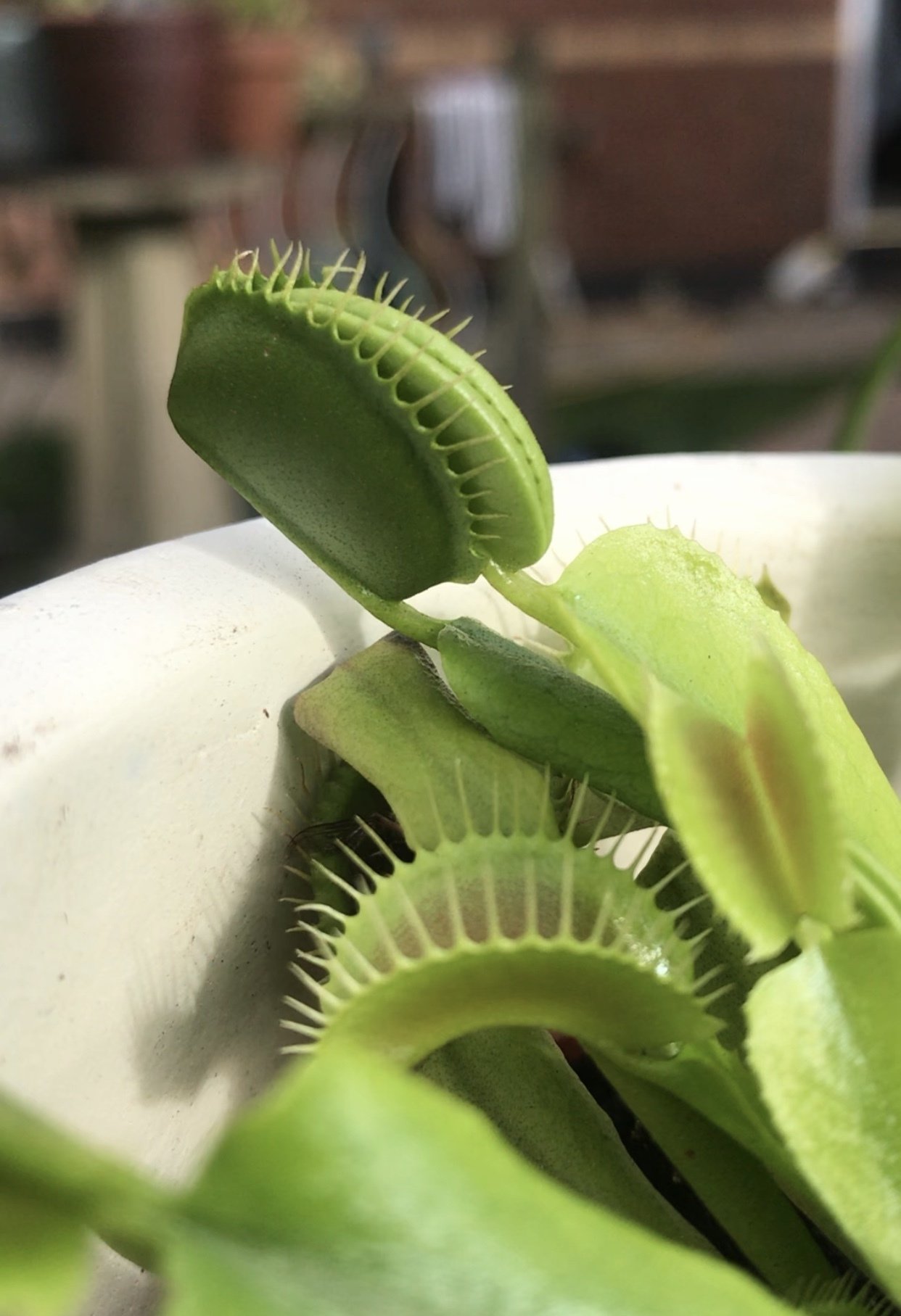 A comical scene where a juvenile Trap is developing between the jaws of its predecessor!

The earliest known document of the Fly Trap can be dated back to 1760, when the North Carolina colonial governor, Arthur Dobbs, penned a letter to English Botanist, Peter Collinson stating about the fascinating fauna in his state. In the letter, he names them as Fly Trap Sensitive, referring to a pre-scientific evaluation of the species.

The genus, Dionaea, received its formal classification back in 1773 by Irishman, John Ellis, who used the Greek word for 'Goddess' (Dione) - this is also where its nickname of Venus' Fly Trap' originates from. 'Muscipula' can be translated from Latin to mean 'mousetrap' ('mus' & 'decipula').

As fewer than 33'000 specimens remain in the wild, the NWF has classified the species as vulnerable, three stages away from extinction. In 2014, the state of North Carolina ranked the theft of naturally-occurring specimens as a felony. Venus Fly Traps have had many medical uses over the years, most notably for human ailments of HIV, Crohn's disease and even skin cancer. 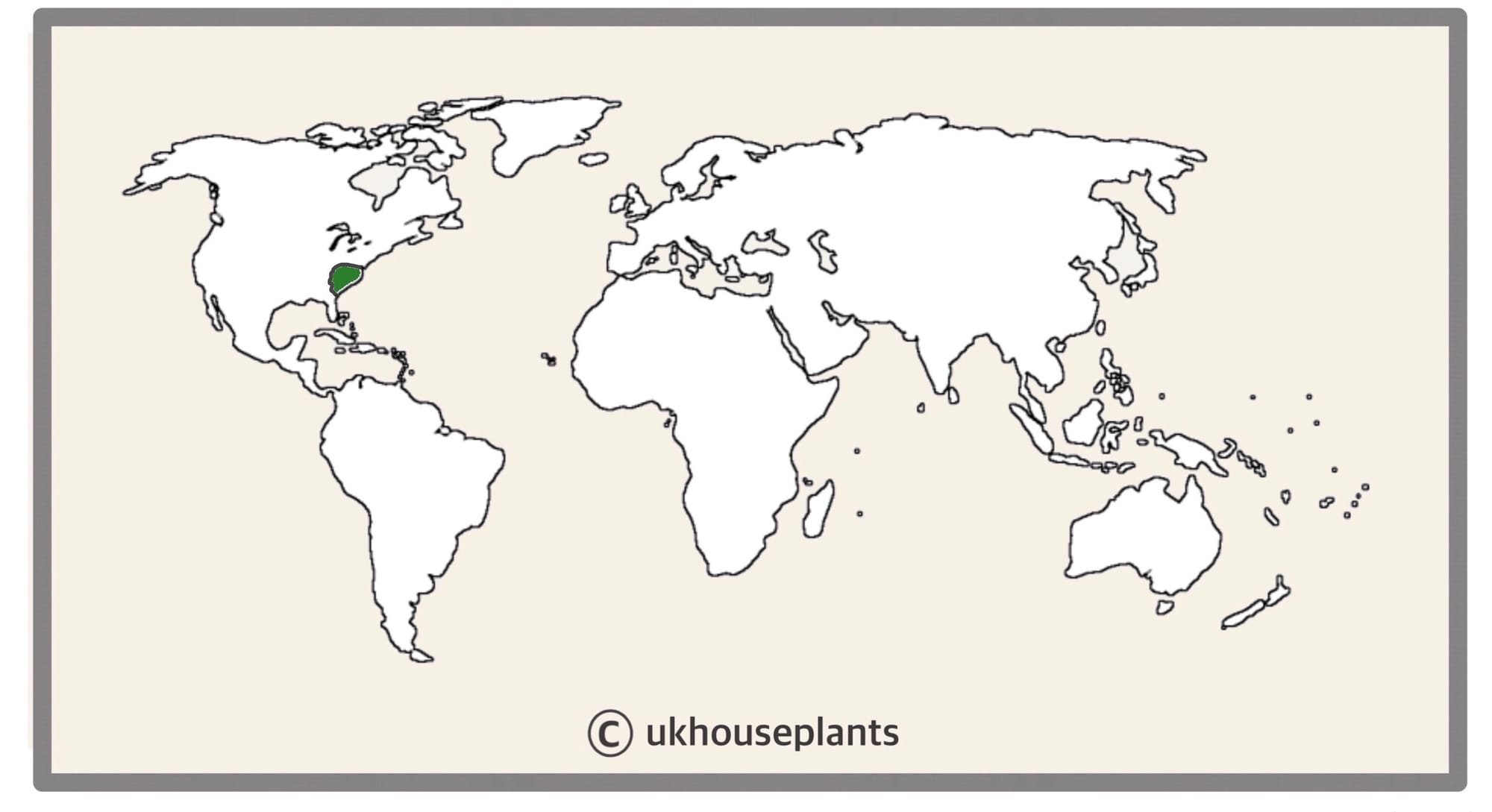 The Distribution of Venus Fly Traps

10° - 38°C   (50 - 100°F)
H1c  (Hardiness Zone 11)  - Can be grown outdoors between late spring and summer throughout most of the UK while nighttime temperatures are above 8℃ (46℉). If you decide to bring the plant outdoors, don't allow it to endure more than an hour of direct sunlight a day as it may result in sun-scorch. Regularly keep an eye out for pests, especially when re-introducing back indoors.

Over 15cm in height and 25cm in width once they reach maturity. The ultimate height will take around 5 years to achieve, but can survive for over twenty years in the right conditions.

Seeds (Easy) - The only soil you can use is a carnivorous-labelled compost, as other mixes will retain too many chemicals that'll burn the cases of the seeds. Set the seeds on top of the soil's surface, resisting the temptation to compact it. Maintain evenly moist compost and allow the excess water to freely drain from the pot's base to prevent water-logging. The ideal location for successful germination is in a bright, indirect setting with temperatures above 18℃  (64℉)  with bottom-heat. Keep the pot in a transparent bag to provide a stable level of humidity, along with longer-lasting soil moisture. Germination may take up to three months, so don't discard any unsuccessful seeds until this threshold has been surpassed. Remove the bag once the seedlings produce their second leaf and then split them into their own 5cm pots after a further month.

Basal Offset Division (Easy) - Your plant will produce several basal offsets that can be separated once they have a sufficient root system, with the foliage's diameter surpassing 5cm. If possible, water the soil 24hrs before the main event to reduce the risk of transplant shock, when its dry root systems are over-fingered. Take the plant out of its pot and place your fingers close to the nodal junction - soil may have to be removed for better access. Push the chosen offset downwards until you hear a snap. Separate the foliage and its root system away from the mother plant, mentally noting the high risk of damage. Transplant in the appropriate sized pot with a fresh batch of carnivorous soil. Maintain evenly moist soil and situate it in a bright, indirect location away from any direct sunlight. After four weeks, treat it like a healthy specimen, following the care tips above!

Venus Fly Traps will produce a cluster of white blooms at the top of a 30cm (12 inches) stem, that'll emerge from its centre. Although they'll naturally bloom in the very early spring, some specimens may flower twice in one year if the dormancy period (served in the winter) is served well. Scroll up to the 'Dormancy Care & Annual Flowers' section for more information. 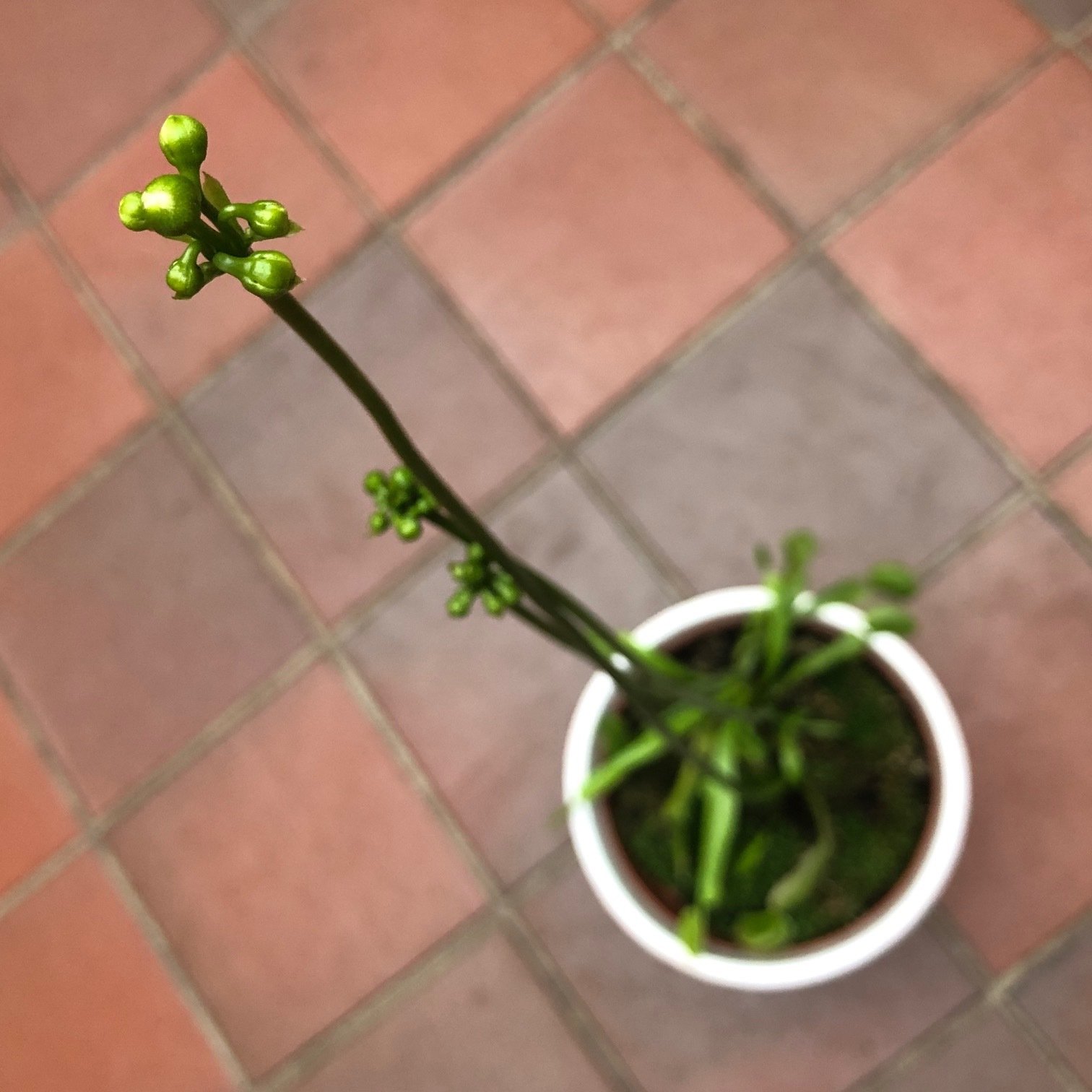 The stalk of an inflorescence can reach heights of up to 30cm. 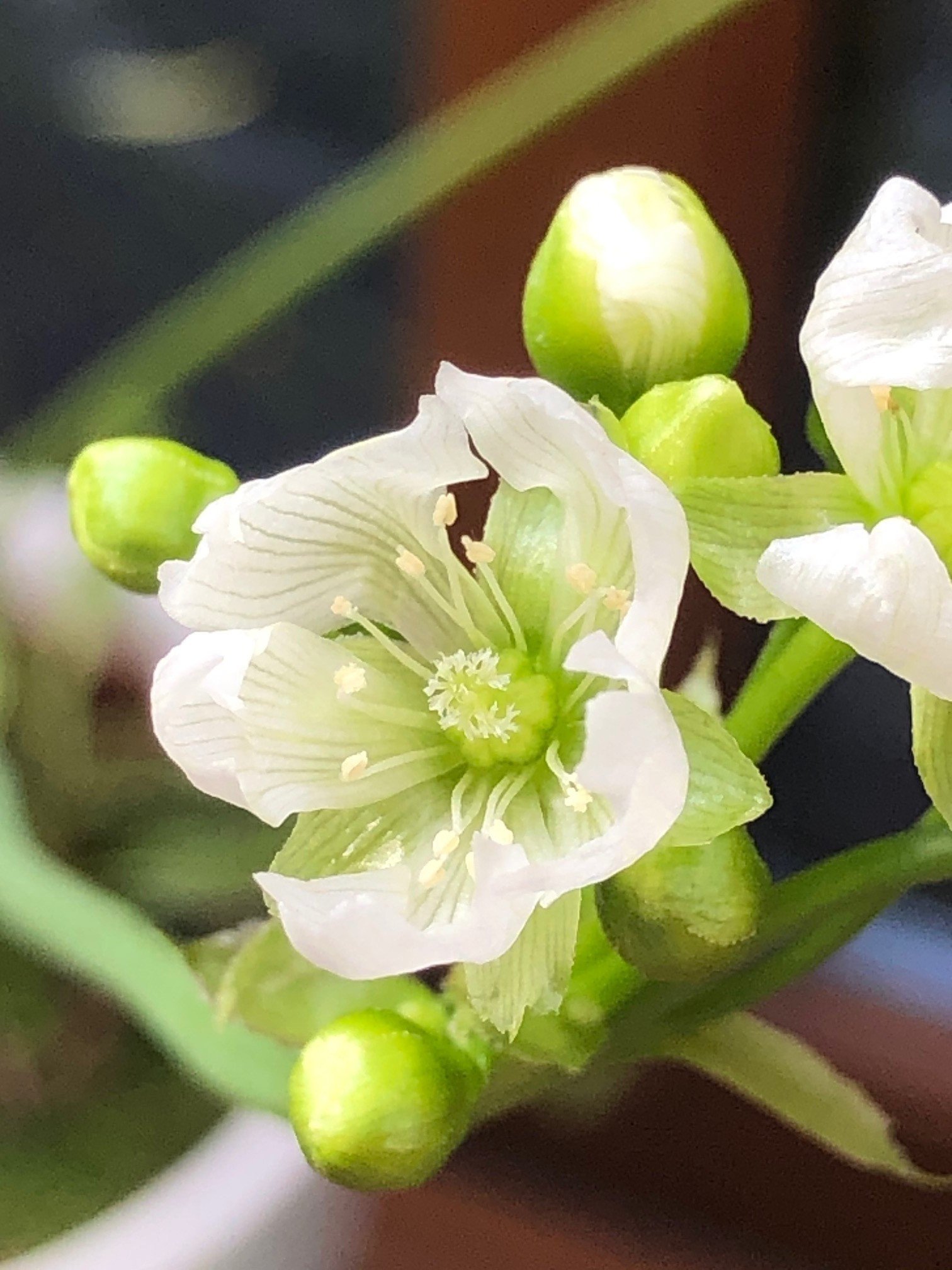 A close-up of the Venus Fly Trap's flower.

Repot every four years in spring using only a carnivorous-labelled compost and the next sized pot with adequate drainage. Hydrate the plant 24hrs before the tinkering with the roots to prevent the risk of transplant shock. If you're still unsure of what to do, never hesitate to send us an email or direct message to get our expert advice on transplantation.

Never use any other compost as the chemicals typically found in these soils will burn the roots, killing the plant outright.

Keep an eye out for mealybugs, aphids, spider mite, scale, blackfly, soil mites & root mealybugs that'll locate themselves in the cubbyholes and undersides of the leaves, with the exception of the latter two in the soil. Common diseases associated with Venus Fly Traps are root rot, leaf-spot disease, botrytis, powdery mildew & southern blight - click here to learn more about these issues.