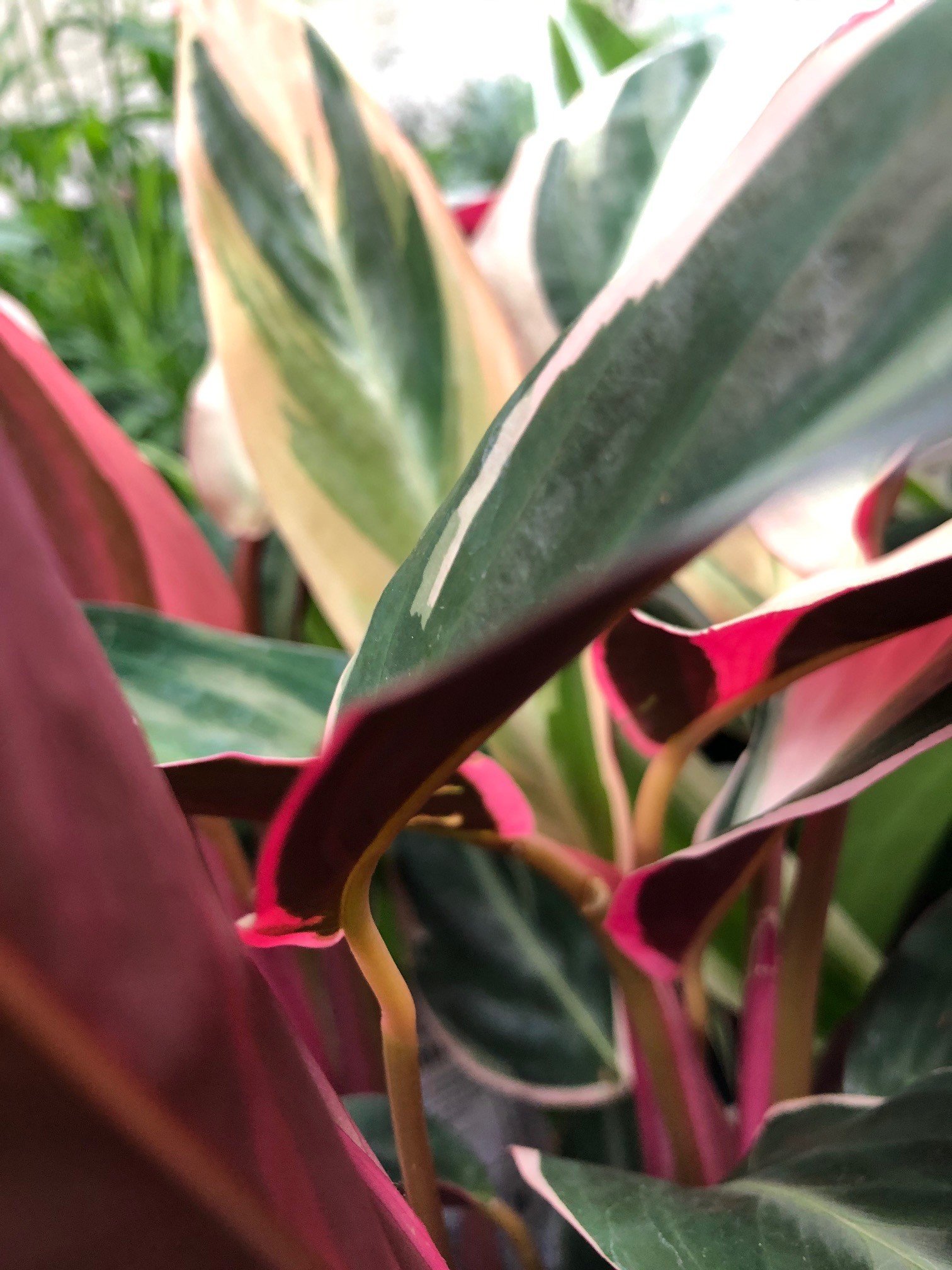 Stromanthe can thrive a whole range of indirect light levels. Avoid intense sunlight for more than an hour a day as it'll cause terminal damage to its leaves; sun-scorch symptoms include pale-yellow leaves, stunted growth and brown patches. If this has happened to your specimen, relocate it to a slightly darker location and remove severely affected areas. Although the already-damaged leaves will not return back to its former glory, new growth will be considerably greener if kept in good cultivation.

Avoid root rot by allowing at least a quarter of the soil to dry out in between irrigations, feeling the weight of the pot for confirmation. Reduce hydrations further in the autumn and winter months, allowing the top third to dry out before another irrigation. Under-watering symptoms include stunted growth, flower loss, wilting, crispy brown patches developing on its leaves, and gradual decline. These issues are usually down to too much sunlight or heat, a much needed repot or sheer forgetfulness. Over-watering symptoms include lower yellowing leaves, stunted growth, browned foliage, wilting or development of brown spots on its leaves. These issues are usually familiar with either too little light or heat, or overly soggy soil. If you feel that root rot is the case, be sure to click on this link for more info.

Create a humidity tray to provide a moist and stable environment for a long-lasting specimen. If the surrounding saturation is too low or the heat too high, its leaves may start to brown over and curl, especially in direct sunlight. Hose the foliage down from time to time to hydrate the leaves and keep the dust levels down. 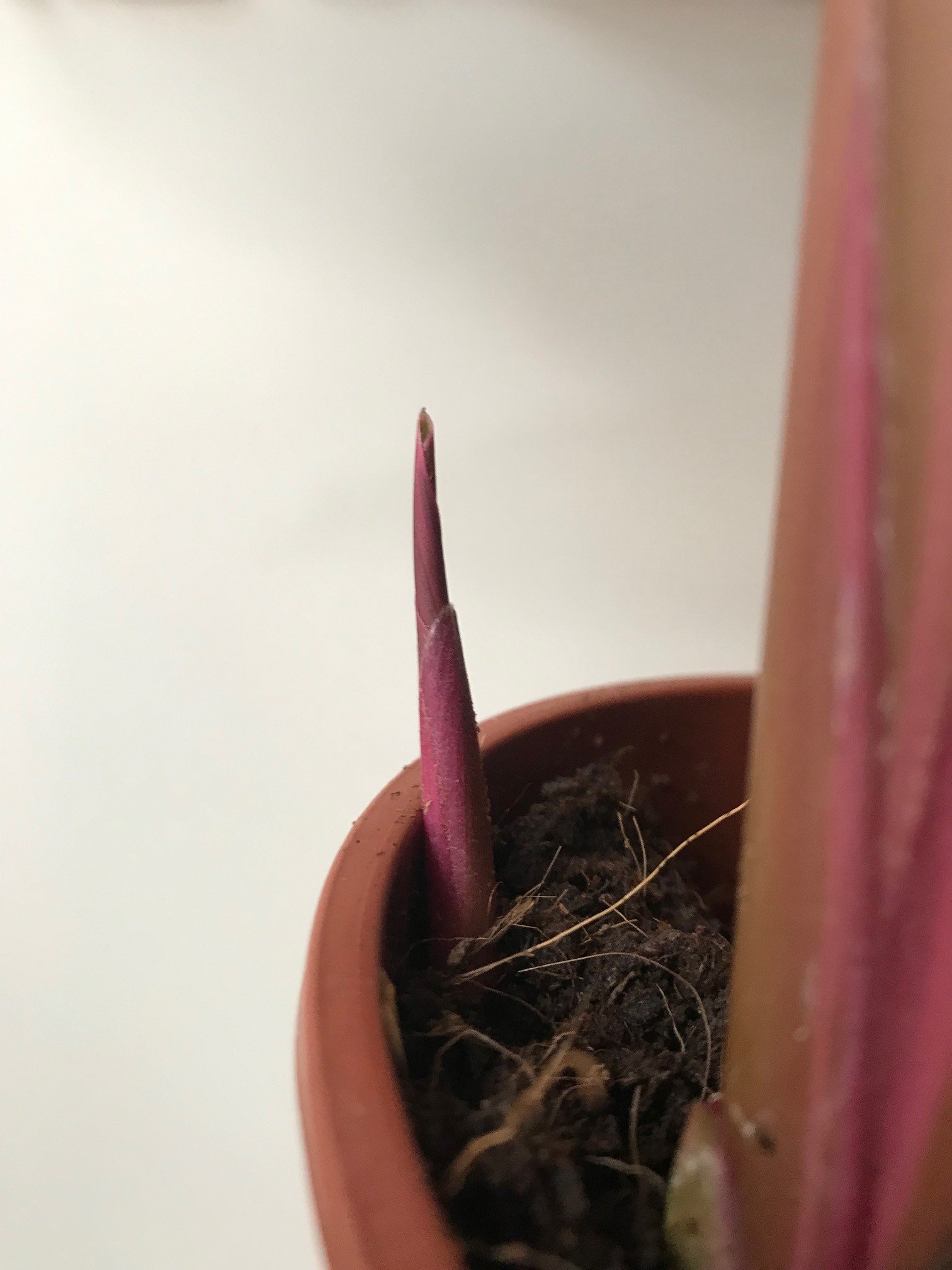 This image shows a new rhizomatous shoot appearing above the soil line that'll develop into its own specimen.

What's the reasoning behind it's movement of leaves?

Not only will they provide a 'jungle-vibe' via their foliage patterns, but they also have a fascinating talent - nyctinastic responses. 'Nyct' refers to the nighttime (think about the word for 'night' in German, Nacht), whereas the 'nastic' refers to plant movement. The motor organs, or pulvinus for botanists, swell and relax depending on the time of day, acting as a valve below the leaf's base.

There are many different types of nastic responses that plants can make; all of which are caused by external factors or stimuli. Mimosa pudica has thigmonastic characteristics where the plant folds its leaves one by one to make itself look dead and unattractive. This way, the predators would at least think twice about destroying a spindly weed, as it appears to be underdeveloped and therefore nutrient deficient. With Stromanthes, however, it's not entirely known why they do this; some believe its to protect the leaves and conserve water, whereas others lean towards the idea of disinteresting predators. Either way, you can certainly agree that it's super fascinating to see the contrast of its positions between both night and day.

Curled leaves and brown leaf-edges are the result of too little water or over-exposure to the sun. This genus is best located in bright, indirect settings, and those that haven't acclimatised to the harsh rays will show signs of sun-scorch and environmental shock. A splash of winter sunlight is acceptable as long as the soil moisture is regularly observed, with complete avoidance once summer comes along.

If the stems and foliage become brown and crispy, you may have to prune it all to entice new rhizomatous growth from the soil line. Cut any dead or dying stems to allow the new addition to develop from the soil line. Reduce the stems back to around 3cm (1 inch) from the soil, keeping the stumps dry to prevent the development of diseases. As long as you provide moist soil and a well-lit location, new growth will appear within a few months. Do not repot or separate the rootstocks during this time, as it'll lead to transplant shock and inevitable death.

Too little light could cause the nyctinastic moments (folding of leaves) to only respond for a fraction of the day, usually accompanied by little to no new growth and gradual decline. Remember to provide a location that is at least bright enough to read a newspaper, and always avoid prolonged exposure to direct light. 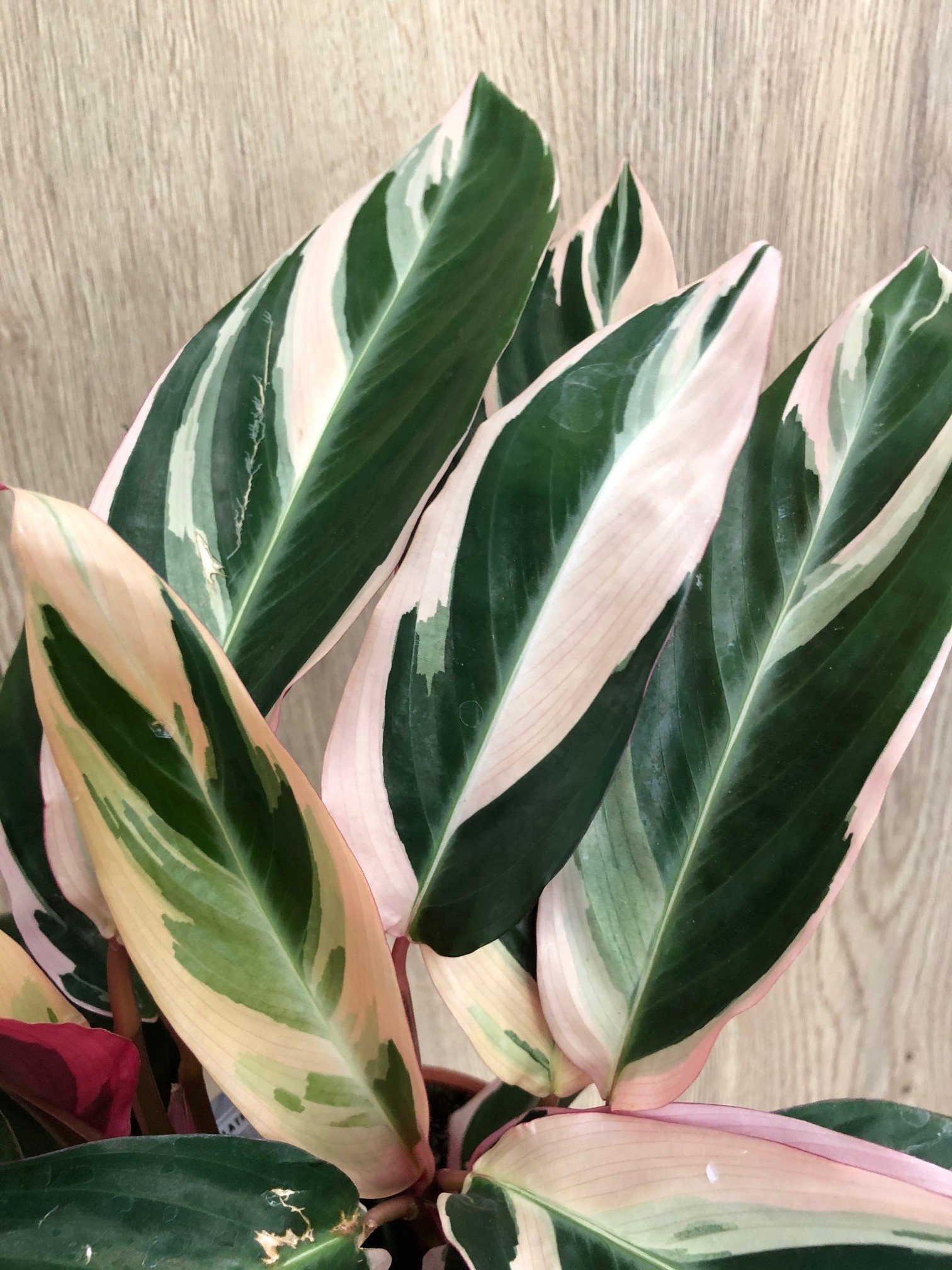 One of the most robust species of the Stromanthe genus, the S. thalia 'Triostar.

Stromanthe is a genus of rhizomatous flowering plants that form part of the Marantaceæ family. Its name originates from Greek, translating to 'high winds' and flowers 'anthe', which possibly refers to how the seeds are dispersed via strong winds. The genus was first described in 1849 by German botanist, Otto Wilhelm Sonder, during a visit to Brazil. 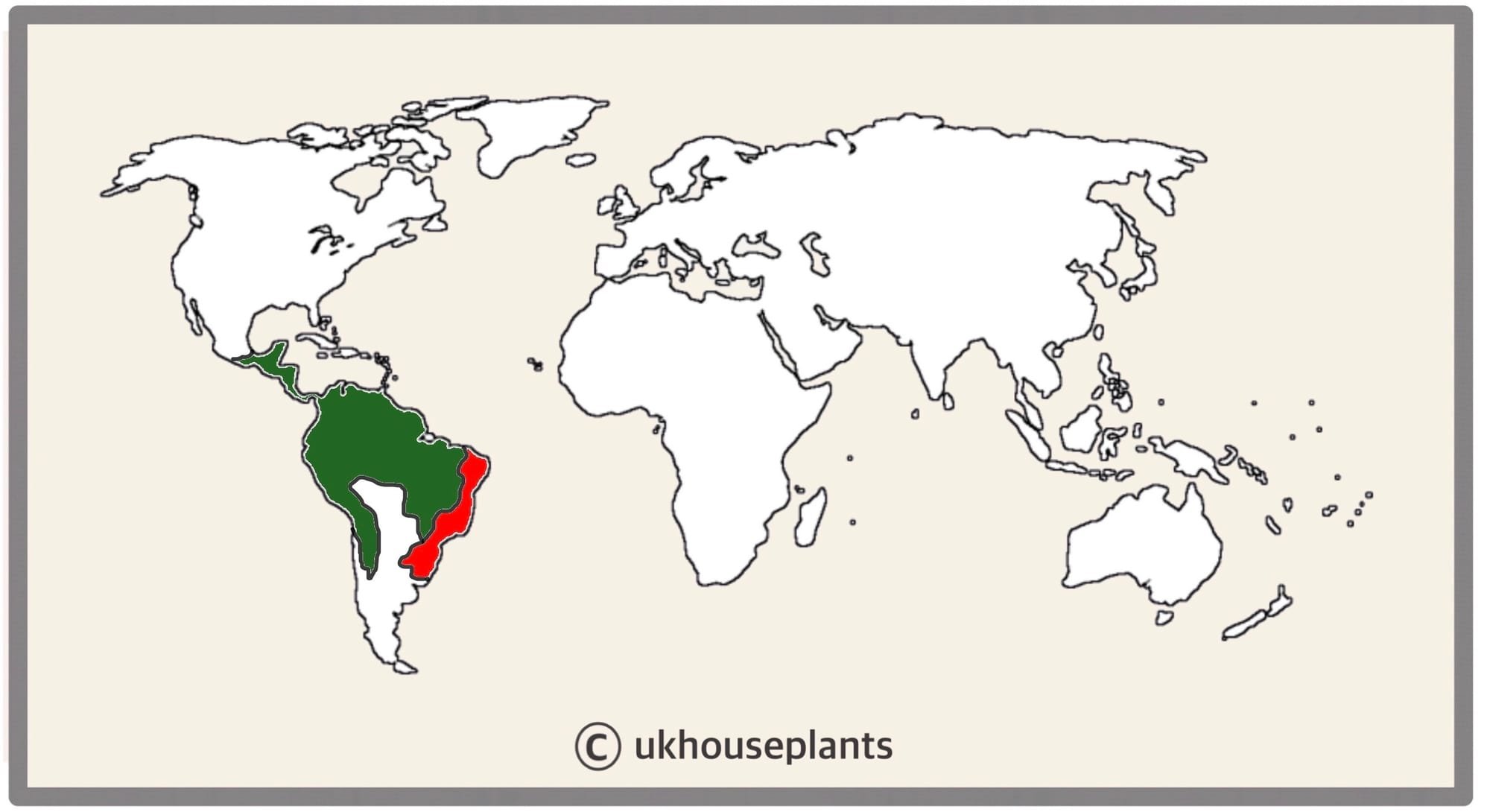 The Distribution of Stromanthe in Green  &  S. thalia 'Triostar' in Red.

Up to 1m in both height and 0.7m in width. Once they either flower or reach maturity, growth will be limited to almost none that can take up to 10 years.

Cut any dying stems to around an inch from the soil line, allowing new growth to develop from its rhizomes. In some instances, you'll have to remove all of the stems, leaving just a bare pot of soil. As long as you provide moist soil and a well-lit location, new growth will appear within a few months. Do not repot or separate the rootstocks during this time, as it'll lead to transplant shock and inevitable death. Here is a rhizomatous growth that'll develop into its own stem in due course.

Rhizome or Offset Division (Moderate) - Separating the basal offsets into their own pot will not only expand your plant collection, but it'll also slow the process of becoming pot bound. The best time to divide is during the spring, with the pup's height surpassing 20cm (7.8 inches). Gently brush away some of the soil to gain better access to the pup's base (lower stem) where the roots will be housed. While using a clean pair of secateurs or scissors, cut the stem with at least two root strands attached to its base. Set the pup in an appropriate-sized pot with adequate drainage and a 'Houseplant' labelled compost. The ideal location would provide bright, indirect light and temperatures above 15℃ (59℉). Maintain evenly moist soil, allowing the top third to dry out in between hydrations. After a month or two, treat it like a matured specimen by using the care tips mentioned above!

Most Stromanthe may never flower indoors, due to the insufficient growing conditions. A large shaft will develop through the middle of each stem, where a flower will develop at the top. As soon as the individual stem blooms, it'll holt growth, allowing new rhizomatous growth to form beneath the soil line.

Small swollen nodules will develop along the Stromanthe's roots which can store both water and nutrients (nitrogen mainly) for potential droughts. Do not remove them as it may lead to stress on the specimen. Spider Plants also have the same root mechanism, however, with the latter they'll develop into cylindrical growths, instead of near-perfect balls.

Keep an eye out for mealybugs, spider mites, scale, thrips & whitefly that'll locate themselves in the cubbyholes and undersides of the leaves. Common diseases associated with Stromanthes are root rot, leaf-spot disease, botrytis, rust, powdery mildew & southern blight - click here to learn more about these issues.

Not considered to be poisonous by consumption of pets and humans; if high quantities are eaten, it may result in vomiting, nausea and a loss of appetite.