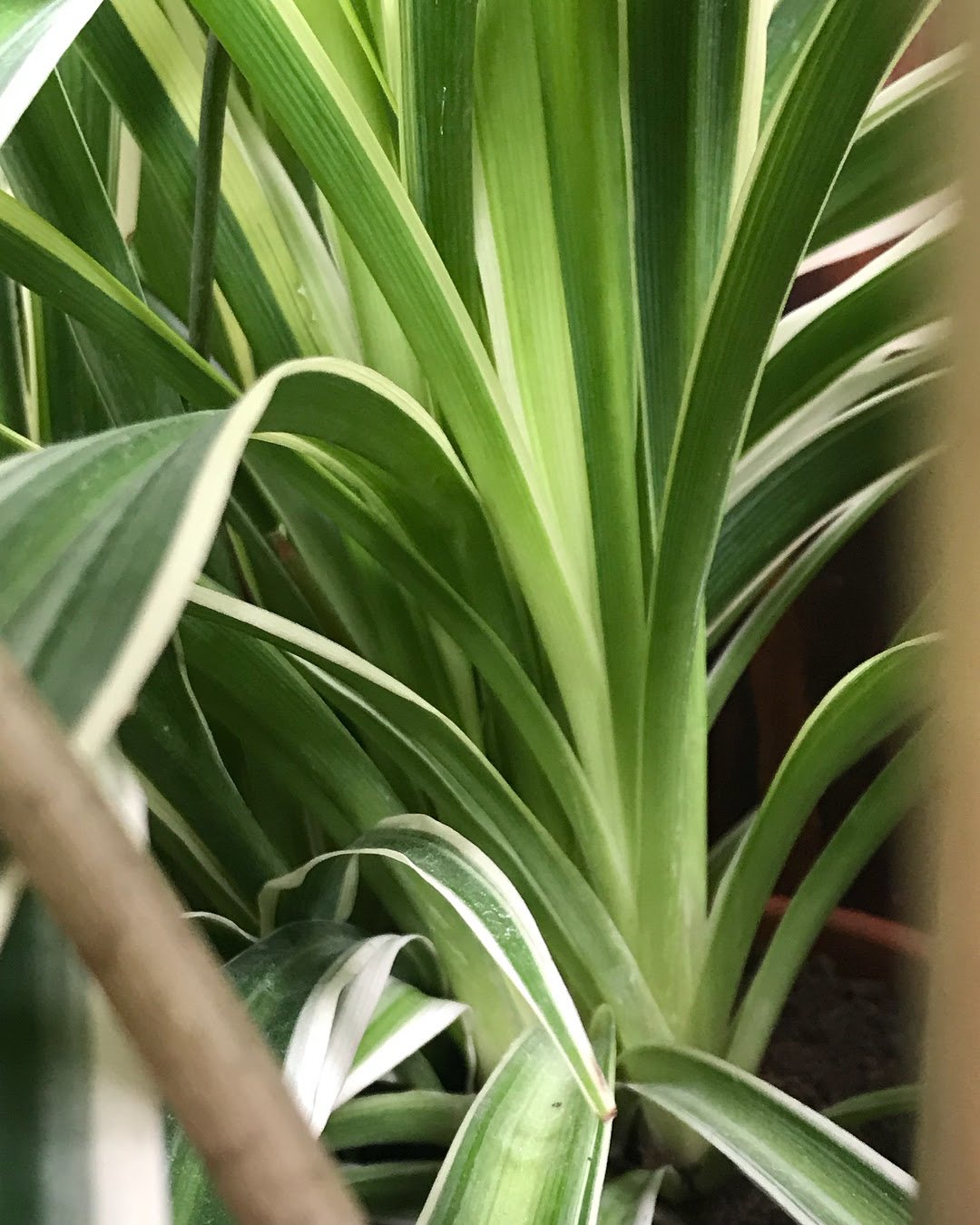 Bright, indirect light is best; however, an hour of morning sun is highly beneficial, too. Avoid more than three hours of sunlight per day as overhead trees in the wild protect them, and could easily result in sun-scorch if ignored. Spider Plants are an excellent choice for darker locations as long as over-watering is avoided; never relocate a specimen that's acclimatised to bright light into a darker area, as it may cause severe wilting and environmental stress.

Allow the top third of the soil to dry out in between irrigations, reducing this further during the autumn and winter months. As they'll develop thick tuberous root systems to survive prolonged drought in the wild, it's always best to under-water a Spider Plant rather than over-do it. When irrigating, use tepid water to prevent hurting their sensitive roots from the sudden temperature change - if it's too cold for your teeth, it'll be the same with the plant, too! Although rainwater is best, if you decide to use tap water, allow it to stand for 24hrs to eliminate both chloride and fluoride; large quantities of these chemicals will gradually build up in the soil over the oncoming months, damaging both its overall health and the soil quality. Under-watering symptoms include stunted growth, browned leaf edges or spiderette death, which are commonly caused by too much heat / light, forgetfulness or a much-needed transplant. Over-watering symptoms include a mushy centre, severe wilting or a collapsed stem. If you feel over-watering is to blame, remove the affected leaves, mushy roots and replace some of the soil with a fresh batch of houseplant compost. Click here to learn more about rotten roots.

Introduce a humidity tray to provide a moist and stable environment for your plant. If the surrounding saturation is too low or the heat too high, its leaves may start to brown over and curl, especially in direct sunlight. Hose the foliage down from time to time to hydrate the leaves and keep the dust levels down.

Fertile soil is key for a healthy specimen; supplement fortnightly during the growing period and monthly for the remainder of the year. Although houseplant feed is best, general purpose fertiliser can be used at half the recommended strength. Never over-feed during the colder months as large build-ups of chemical salts may cause root-burn and weakened health.

Browning leaf tips or edges is the biggest problem gardeners will face. Finding the direct cause is somewhat tricky, as it'll range from too much direct sunlight with too little watering, a much-needed transplant, over-fertilisation, or excessive fluoride found in tap water. Spider Plants must not endure more than three hours of on-peak sunlight, especially if the soil is kept too dry, as sun-scorch may arise. Apart from the browned leaf-tips, a washed-out appearance consisting of yellowing leaves, severe wiling and dying leaf edges will begin to develop. Relocate the specimen in a slightly darker location, maintaining evenly moist soil with the avoidance of fertilisation.
Becoming potbound is the second common cause of browning leaf tips. If you haven't had already noticed, large swollen roots will quickly fill the pot within a few months, strengthening itself for potential droughts. Click on this link to learn more about the dos and don'ts of repotting, along with a step-by-step guide on performing the perfect transplant.
Over-fertilisation may be to blame. Although they prefer to grow in nutritious soil, large build-ups of chemical salts will develop over the year, causing root burn and yellowing leaves. If you feel that this is to blame, give it a good soak, allowing the water to drain beneath the pot to wash away excess salts freely.
Finally, fluoride found in tap water could also be the culprit for the deformed growth. Never directly pour water from the tap into the soil without being stood in a non-metal container for at least 24hrs before application. This is because chemicals such as chloride, and most notably fluoride, won't have enough time to evaporate when applied too soon. Large quantities of these chemicals will develop over the following months, wreaking havoc within the soil and roots. For more information about how to correctly water a houseplant, click on this link!

Yellowing leaves could be the sign of too little sunlight or over-watering, which commonly go hand in hand. Specimens situated in darker locations must be watered far less than those grown elsewhere, purely based on the photosynthesis and lack of warmth from the sun. Over-watering symptoms include a mushy centre, severe wilting or a collapsed stem. Allow at least half of the soil to dry out in between irrigations and increase the amount of light to promote better uptake of water through the roots.

If a spider plant has collapsed, but still appears healthy, it could be down to the lack of light. Again, situate it in a brighter location with no direct sunlight to prevent further stress.

The final issue is the surrounding temperature. Spider plants cannot tolerate temperatures below 10℃ (50℉) as their natural environment wouldn't dip below this threshold during the year. Typical symptoms include the yellowing of leaves and foliage decline, along with a general deterioration of health. Remove the affected leaves and immediately present a location with an adequate amount of warmth - avoid persistent droughts and intense sunlight to prevent further issues.

Failed cuttings propagated via water - There are several reasons why the cuttings haven't rooted well, with the first being the time of year. Spider Plants are best propagated during the spring, with cuttings taken in the autumn or winter rooting much slower.
The second reason could be the cultivation environment - is there enough light to read a newspaper? If not, improve the growing conditions by increasing the amount of indirect light, avoiding the threat of excessive direct sunlight.
Moreover, the size of the cutting will play a big part in its success; smaller specimens (3cm in length or less) won't root appropriately due to the lower amounts of stored energy.
The water must also be replaced weekly to ensure nasty pathogens cannot breed and decay on the cuttings. If the bottom of the stem is brown and mushy, discard immediately as the rot will spread onto unaffected spiderettes. For more help with Spider Plant propagation, be sure to send us an email or via DM on Instagram.

The genus, Chlorophytum has distributions across tropical Africa, but has recently been introduced to other areas such as Western Australia, Thailand and Malaysia. The C. comosum (Spider Plant) was first described by Carl Peter Thunberg as 'Anthericum comosum' in 1794, in a book during a visit to South Africa. From this point onwards, the species has been placed in many different genera, including Phalangium and Caesia, but was finally placed in Chlorophytum in 1862. 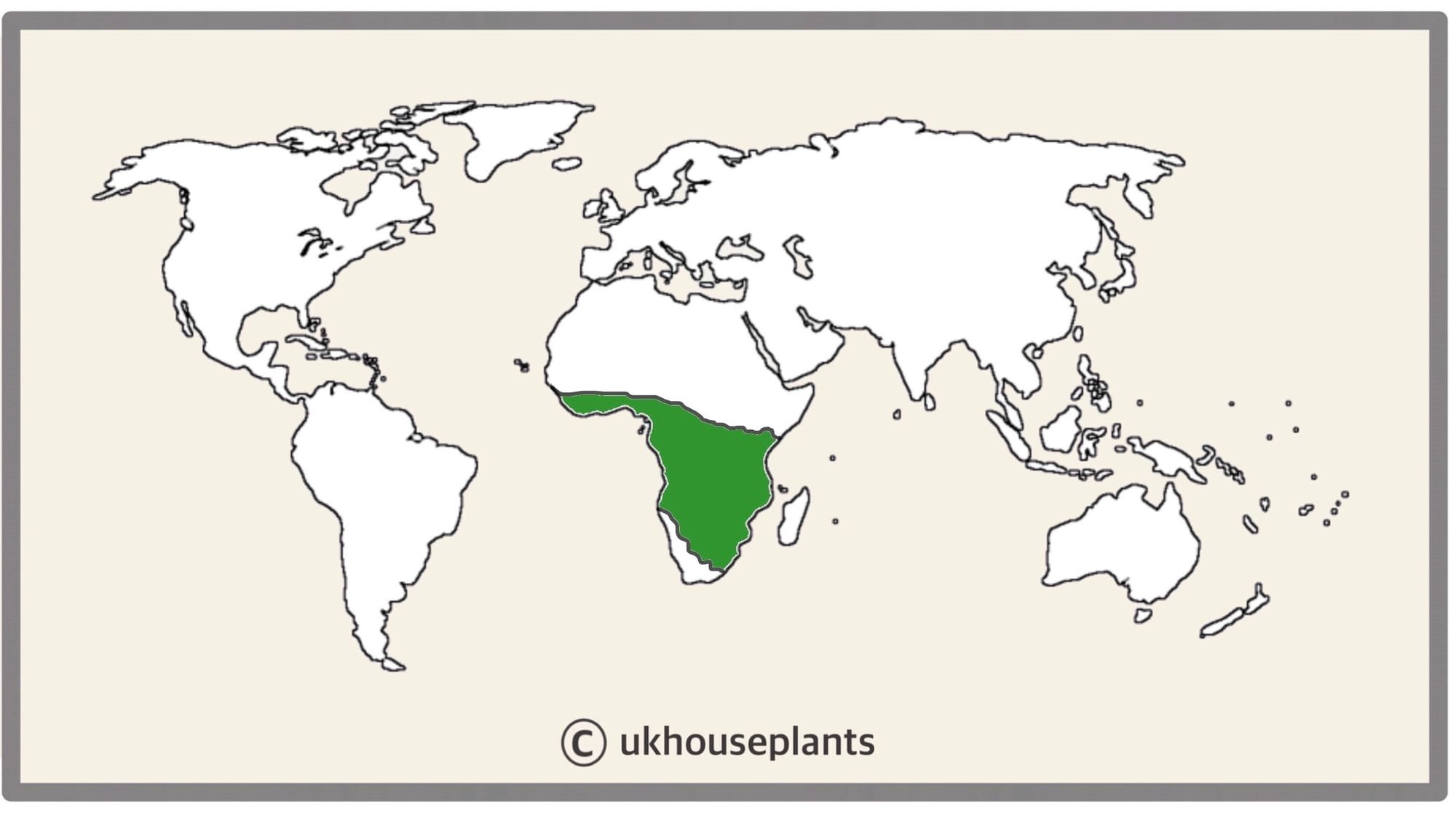 A Distribution Map of Chlorophytum

H1b (Hardiness Zone 12) - Can be grown outdoors during the summer in a sheltered location with temperatures above 10℃  (50℉),  but is fine to remain indoors, too. If you decide to bring this houseplant outdoors, don't allow it to endure more than an hour of direct sunlight a day as it may result in sun-scorch. Regularly keep an eye out for pests, especially when re-introducing it back indoors.

Up to 0.7m in both height and width. The ultimate height will take between 3 - 6 years to achieve, with rapid growth per month. Stolons (or runners) will develop within 18 months of purchase or propagation.

Via Seed, Division or Spiderettes (Runners)

Division (Easy) - Your plant will produce several basal offsets that can be separated once they have a sufficient root system. If possible, water the soil 24hrs before the main event to reduce the risk of transplant shock, when its dry root systems are over-fingered. Take the plant out of its pot and place your fingers close to the nodal junction - soil may have to be removed for better access. Push the chosen offset downwards until you hear a snap. Separate the foliage and its root system away from the mother plant, mentally noting the high risk of damage. Transplant in the appropriate sized pot with a fresh batch of houseplant soil. Maintain evenly moist soil and situate it in a bright, indirect location away from any direct sunlight. After four weeks, treat it like a normal Spider Plant, following the care tips above! 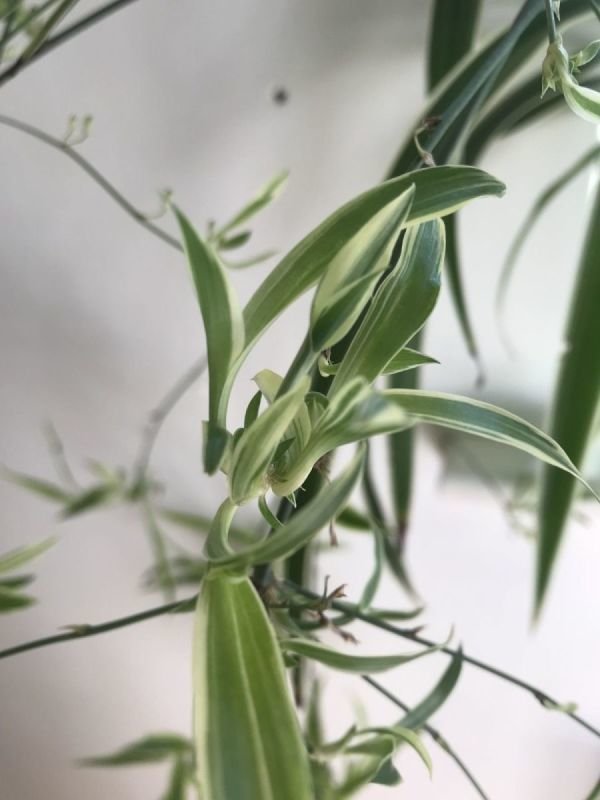 Spiderettes off a stolon (runner)

Spiderettes (Very Easy) - After a year or so, Spider Plants will produce stolons that house spiderettes (offsets) and small, white flowers. Once the spiderettes are around 6cm in height, safely snip the plants off from the stolon and place in water for a few weeks. Once the root system is a quarter of the plant's height, it's time to pot it up. Choose a 7cm pot that's has adequate drainage and fill with a 'Houseplant' labelled compost. Submerge the roots, with a slither of the cutting's base into the soil and water thoroughly. After the first irrigation, the soil may dip and compact in some areas - this is completely fine and should be filled with the leftover houseplant compost. Keep the spiderette in a bright, indirect location away from direct sunlight and other heat sources. Maintain evenly moist soil, allowing the top layer to become dry in between waters. After two months, treat it the same as you would with the mother plant, following the care tips above.

'Runners', or stolons, will develop during spring and summer that'll hold small white flowers and offspring in the form of spiderettes. The flowers will develop in succession along the stolon, lasting up to five days before browning over. 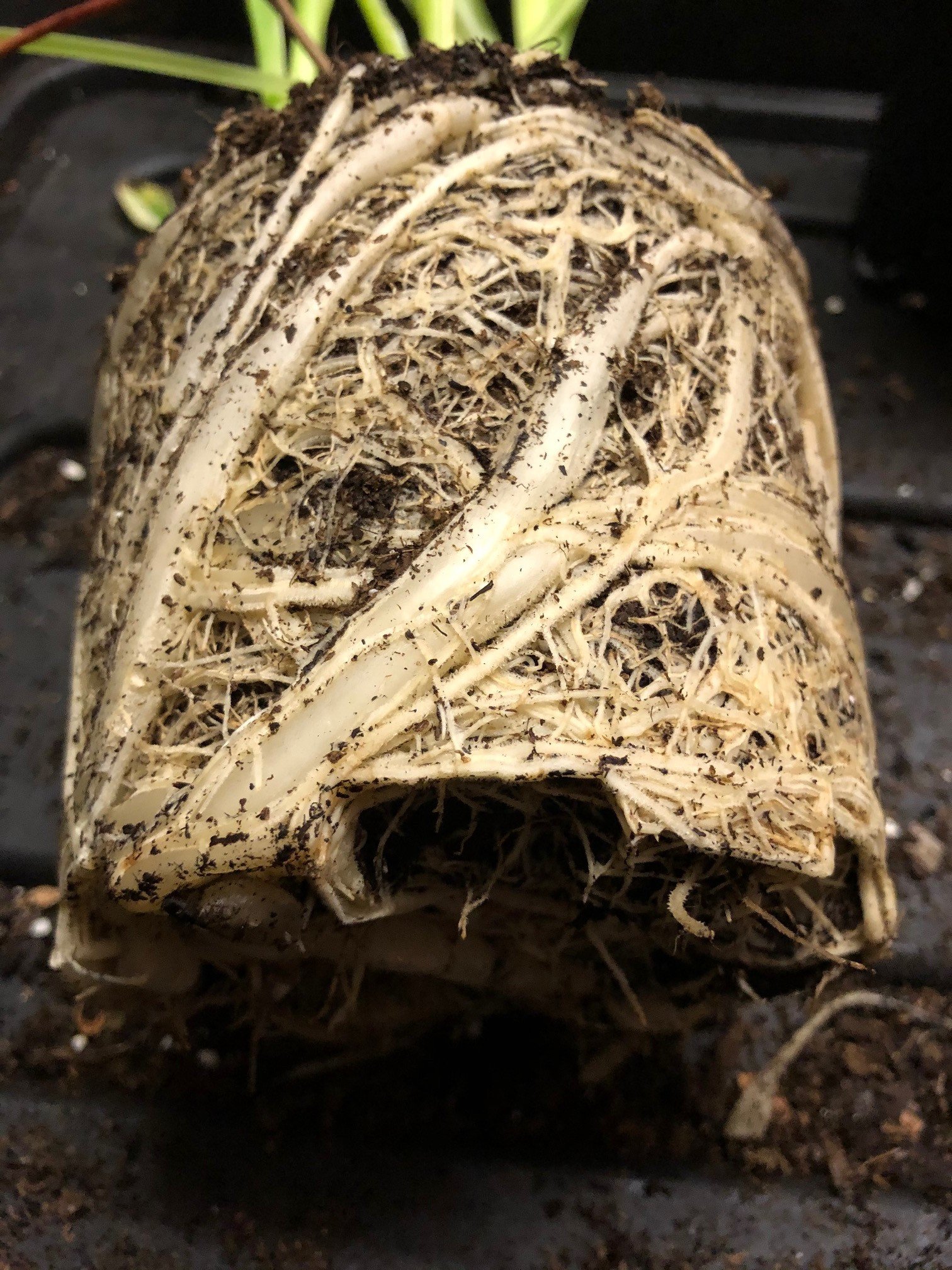 Spider Plants have a very invasive root system, meaning that they must be repotted annually to prevent damage to the pot. The root system pictured is eighteen months old and far too potbound for its own good.

Repot annually in the spring using Houseplant Compost and the next sized up pot. For matured specimens, introduce more grit to promote a stronger root ball; click on this link for more information on how to perform the perfect transplant.

The three main symptoms of being pot bound are slowed growth, browning leaf edges and large tubers (cylindrical shaped) developing along the root systems. It's important to regularly increase the pot size to reduce the threat of stressed roots, which in turn may result in poor foliar health.

Although they're mostly pest-free, spider mite or fungus gnats could attack at any time. Common diseases associated with Spider Plants are leaf-spot disease, root rot, powdery mildew and botrytis (grey mould) - click here to learn more about these issues.

This plant is slightly poisonous. If parts of the plants are eaten, vomiting, nausea and a loss of appetite could occur. Consumption of large quantities must be dealt with quickly; acquire medical assistance for further information.

Blue Diamond,  Dobbie's,  British Garden Centres,  Wilko's,  B&Q,  Homebase  &  Online Stores. Facebook Market should be the first port of call for purchasing a Spider Plant, purely on the basis of cheaper prices when bought as a 'spiderette' cutting.