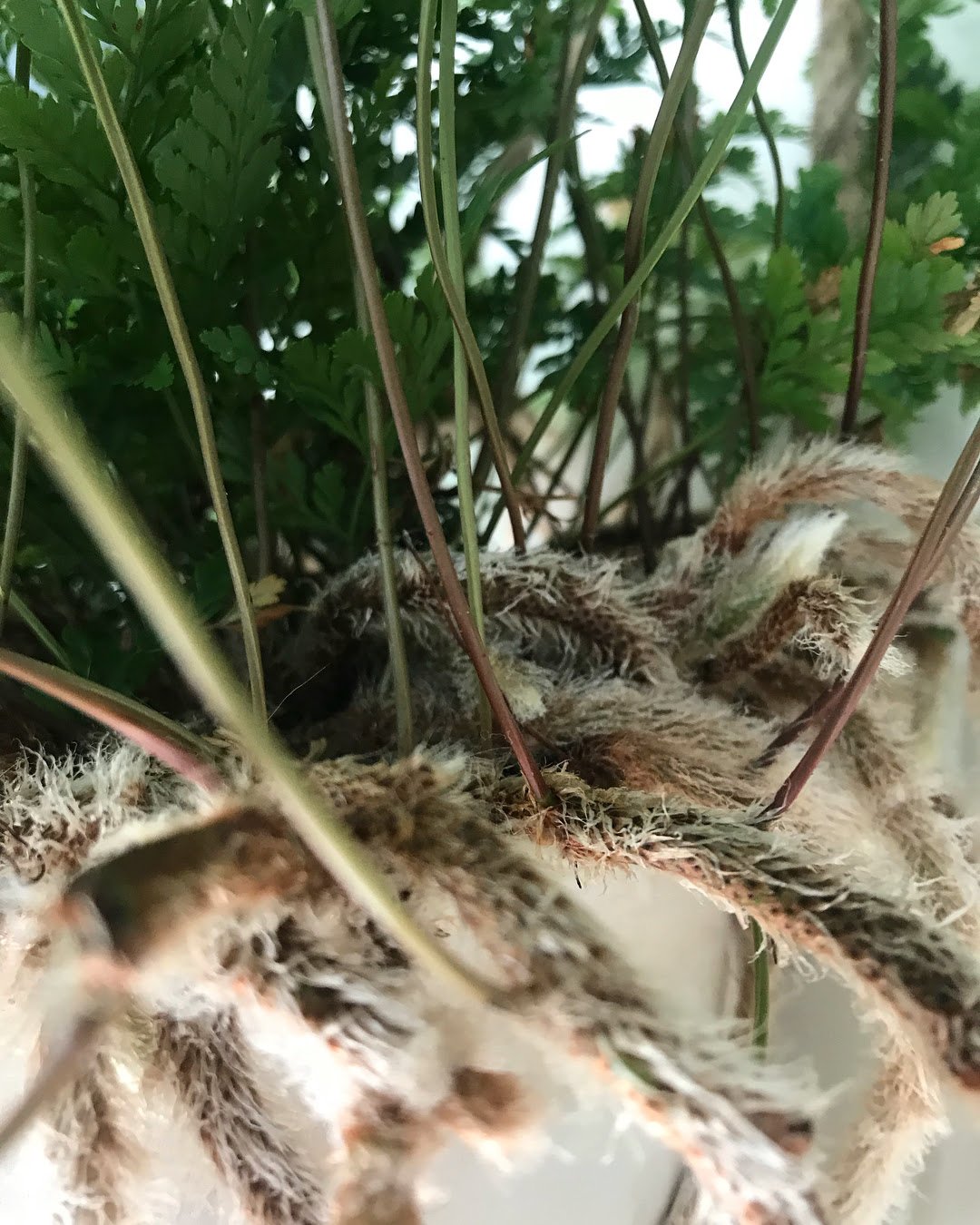 Bright indirect light is best; the combination of good soil moisture and a well-lit location will provide the best results for your fern. Sunny areas should be avoided at all costs, as prolonged exposure with dry soil will quickly result in pale leaves, stunted growth and crisping foliage - if it's too hot for a chocolate bar, it'll be too hot for the plant, too!

Alternatively, lower-lit areas should only be used, if wholly necessary. Although Rabbit Foot Ferns can thrive in shady locations, the reduced rates of photosynthesis and too-moist soil will lead to a weakened plant, along with the chance of developing root rot.

Rehydrate once the top third of the soil dries out, reducing this slightly further in the autumn and winter. Use the freshest water possible; either buy some bottled water from a store or allow tap water to sit for around 24hrs before application. Letting the water to stand will not only bunk up the temperature, but it will also alleviate the fluoride that can cause an imbalance of nutrients in the soil. Under-watering symptoms include crispy or yellowed leaves and stunted growth, commonly due to either forgetfulness or too much light/heat. Over-watering symptoms include rapidly yellowing leaves at the base, frond, rhizome or root rot. If your specimen is displaying these symptoms, reposition it to a brighter location and reduce irrigations - Rhizoctonia could be an issue with severe cases.

A good balance of high humidity and good air circulation is a must. Create a humidity tray to provide a moist and stable environment for your plant. If the surrounding saturation is too low or the heat too high, its fronds may start to brown over and curl, especially in direct sunlight. Hose the foliage down from time to time to hydrate the leaves and keep the dust levels down.

While we're on the topic of its atmospheric requirements, air pollution (scented candles, deodorant, cigarettes) must not be used nearby to avoid angering the leaves. 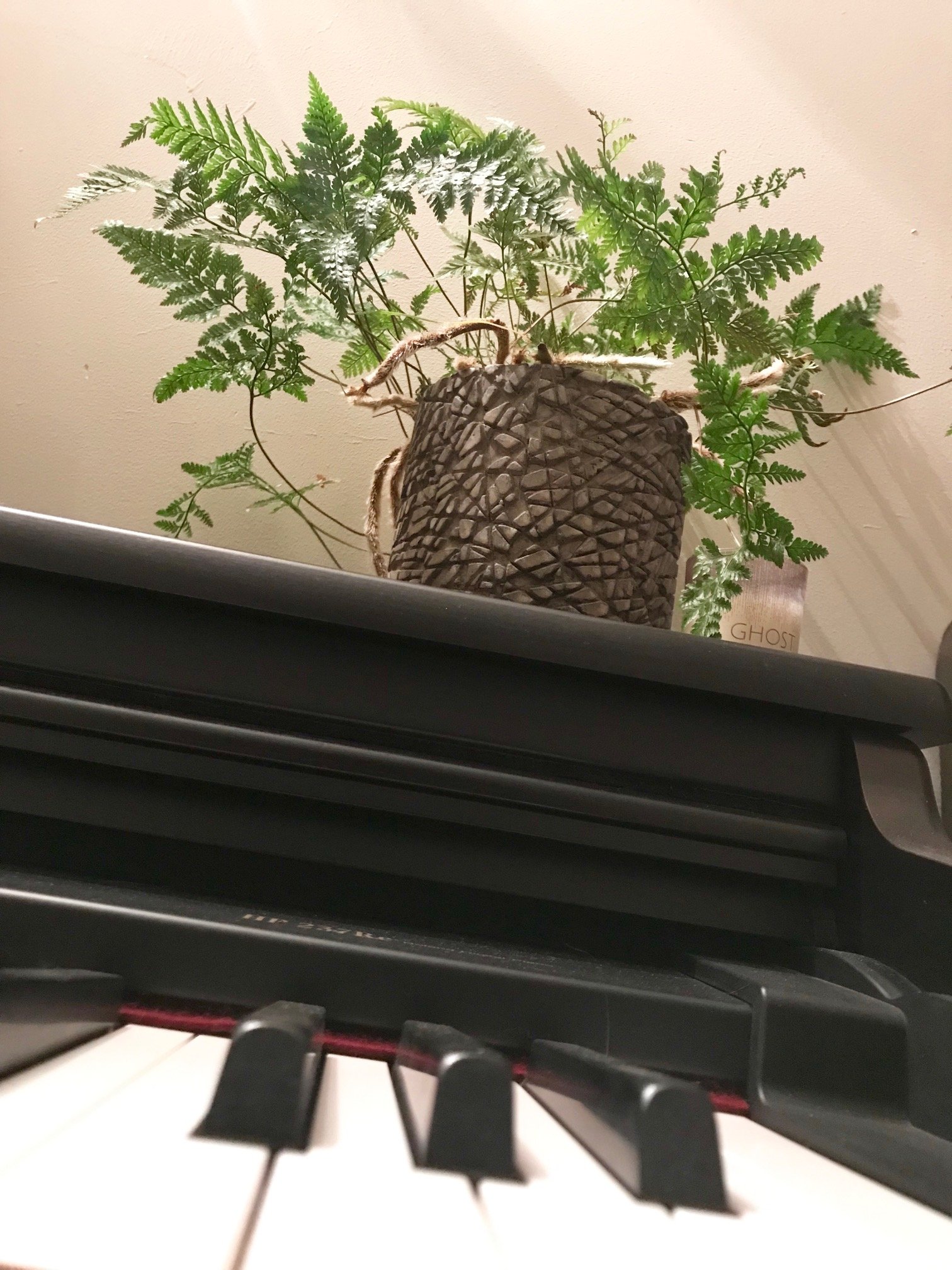 Our beautiful Rabbit Foot Fern sitting proudly on a piano.

When this species is severely dehydrated, most of its leaves will crisp-up and fall off - leaving you with a naked plant. Although it may spell the end of juvenile plantlets, there may still be light at the end of the tunnel for more established specimens. If the stems and leaves are thoroughly crisp, prune the stems to around an inch from the soil line and contain the plant (with its pot) in a transparent bag that has small holes. Keep the soil continually moist, providing a good level of indirect light and temperatures above 15°C (59°F). After a few weeks, new growths will form at the rhizome's terminals, signalling the start of its recovery process. Maintain a sealed environment for the following month until you feel it's necessary to release it back into the open air. For the prevention of environmental shock, be sure to introduce a humidity tray for higher levels of atmospheric moisture around the plant in its new setting. Not only will this ease the specimen back into healthy functioning life, but it'll also reduce the rate of transpiration (water-loss in the leaves), and therefore downplay the risk of dehydration and further decline.

Root or rhizome rot is a common issue among specimens sat in too dark environments with prolonged soil moisture. Symptoms include rapidly yellowing leaves, stunted growth and a rotten brown base. Take the plant out of the pot and inspect health below the soil line. If the roots sport a yellow tinge, you're good to go, but if they're brown and mushy, action must be taken immediately. More information about addressing root rot can be found on this link. 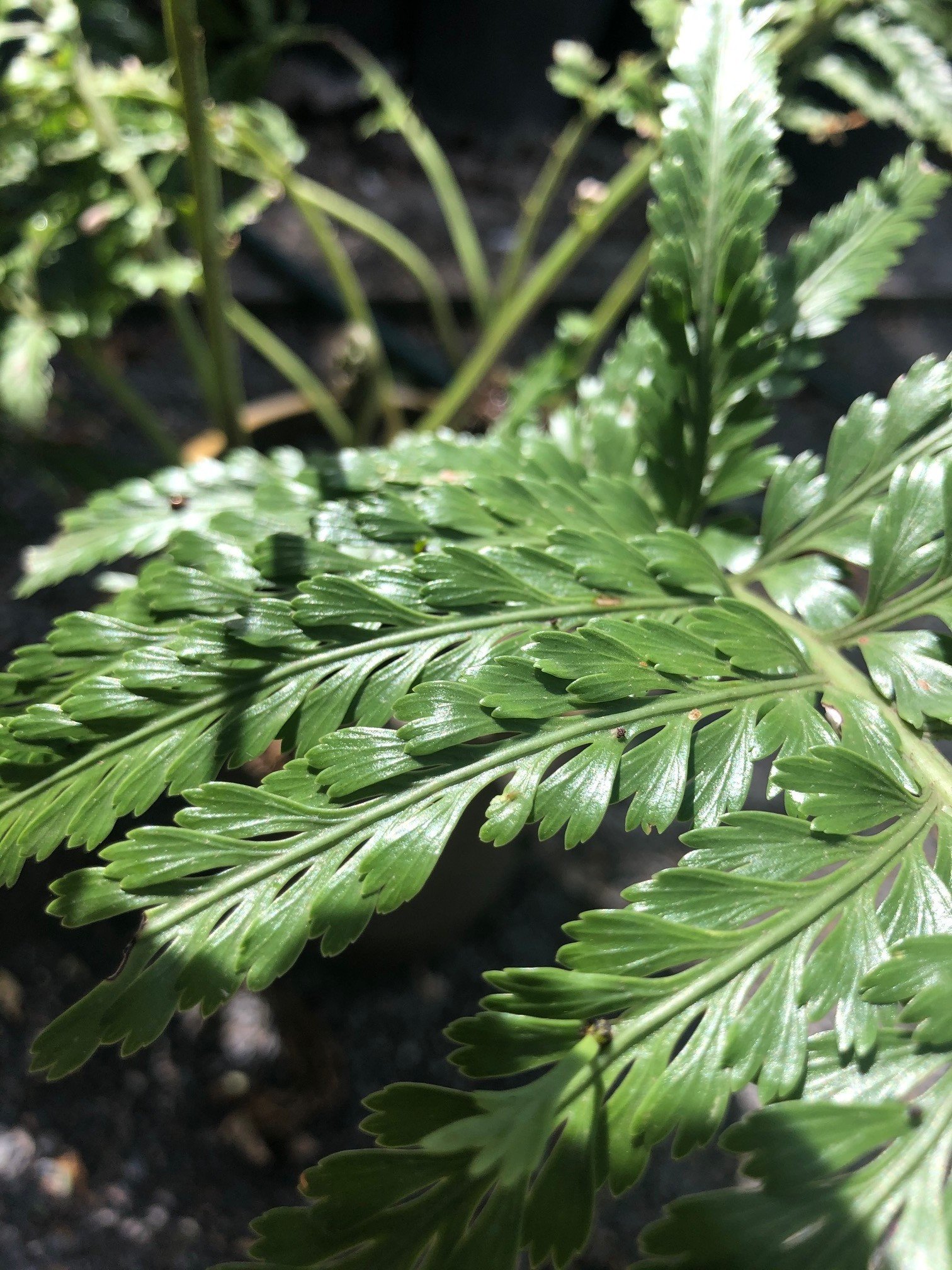 Due to the species' sensitivity to chemicals, Leaf Shine shouldn't be used to improve the appearance of the foliage, and instead should be cleaned using warm soapy water. Failure to do so may cause yellowed, mottled spots that cannot be undone.

D. solida var. fejeensis (Rabbit Foot Ferns) is one of forty species that form the Davallia genus, all of which are epiphytic or lithophytic. This genus primarily originates from Asia and the Pacific, with its name honouring Swiss botanist, Edmond Davall in the 18th century. 'Fejeensis' refers to the Fiji Islands, where this species was first discovered. 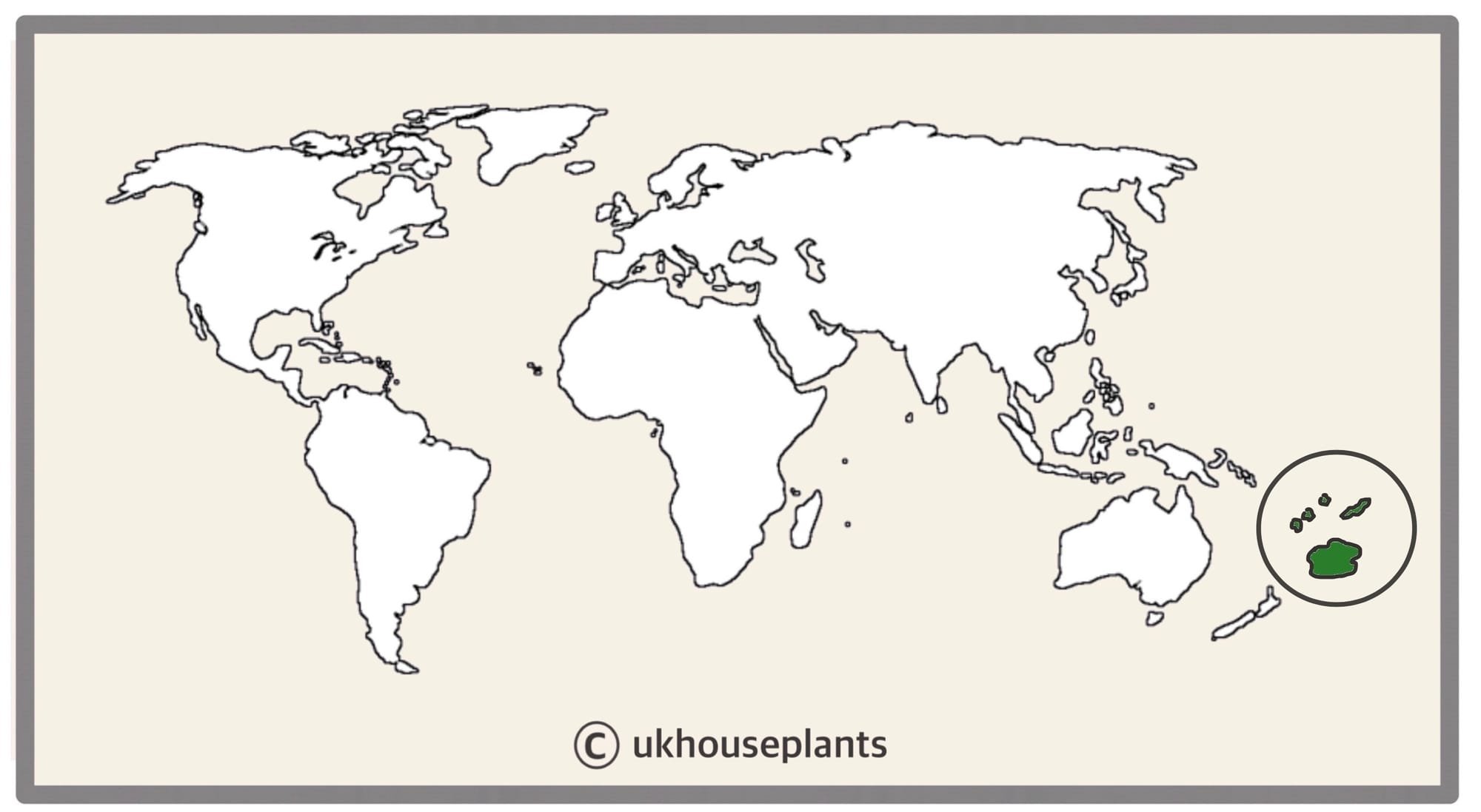 12° - 26°C   (54° - 80°F)
H1b  (Hardiness Zone 12)  - Can be grown outdoors during the summer in a sheltered location with temperatures above 12℃  (54℉),  but is fine to remain indoors, too. If you decide to bring this plant outdoors, don't allow it to endure any direct sunlight as it may result in sun-scorch and dehydration. Regularly keep an eye out for pests, especially when re-introducing it back indoors.

Up to 0.6m in height and 1m in width, depending on the pot size. The ultimate height will take between 5 - 10 years to achieve, with up to 8cm of rhizomatous growth per season.

Via Spores, Division or Rhizome Cuttings.

Spores (Easy) - You may have noticed little brown spots under the leaves - those are reproductive spores that can be propagated in the same way as seeds, once matured. These zygotes will develop on the under-leaves of each frond; you'll know when they're ready to be propagated, as they'll brown over and begin to crisp.

Division (Easy) - The best time to divide is during the repotting period. Gently tease away some of the soil, separating fleshy rhizomes with sections of the original root systems and plenty of foliage. Place the separated plantlets in a moist, 'Houseplant' labelled potting mix and avoid direct sunlight with prolonged droughts. Although this method is quite easy, be mindful of transplant shock and do not perform this method if the plant is displaying signs of stress. Always moisten the soil 24hrs before repotting or division to avoid shocking the root systems.

True ferns will not flower and instead must be propagated by either spores, rhizomes, depending on the species.

Keep an eye out for mealybugs, aphids, spider mites, scale, thrips, blackfly, vine weevils & root mealybugs that'll locate themselves in the cubbyholes and undersides of the leaves, with the exception of the latter two in the soil. Common diseases associated with Rabbit Foot Ferns are root rot, leaf-spot disease, botrytis, rust, Rhizoctonia, powdery mildew & southern blight - click here to learn more about these issues.

N. B. - Although spraying chemical-based pesticides onto the foliage won't necessarily hurt the plant, its sensitive nature to certain chemicals could cause yellowed leaves and reduced growth. ukhouseplants recommends using homemade pesticides such as garlic water, as it won't contain harmful pesticides that could burn the foliage.