Queen of the Night - Epiphyllum Oxypetalum 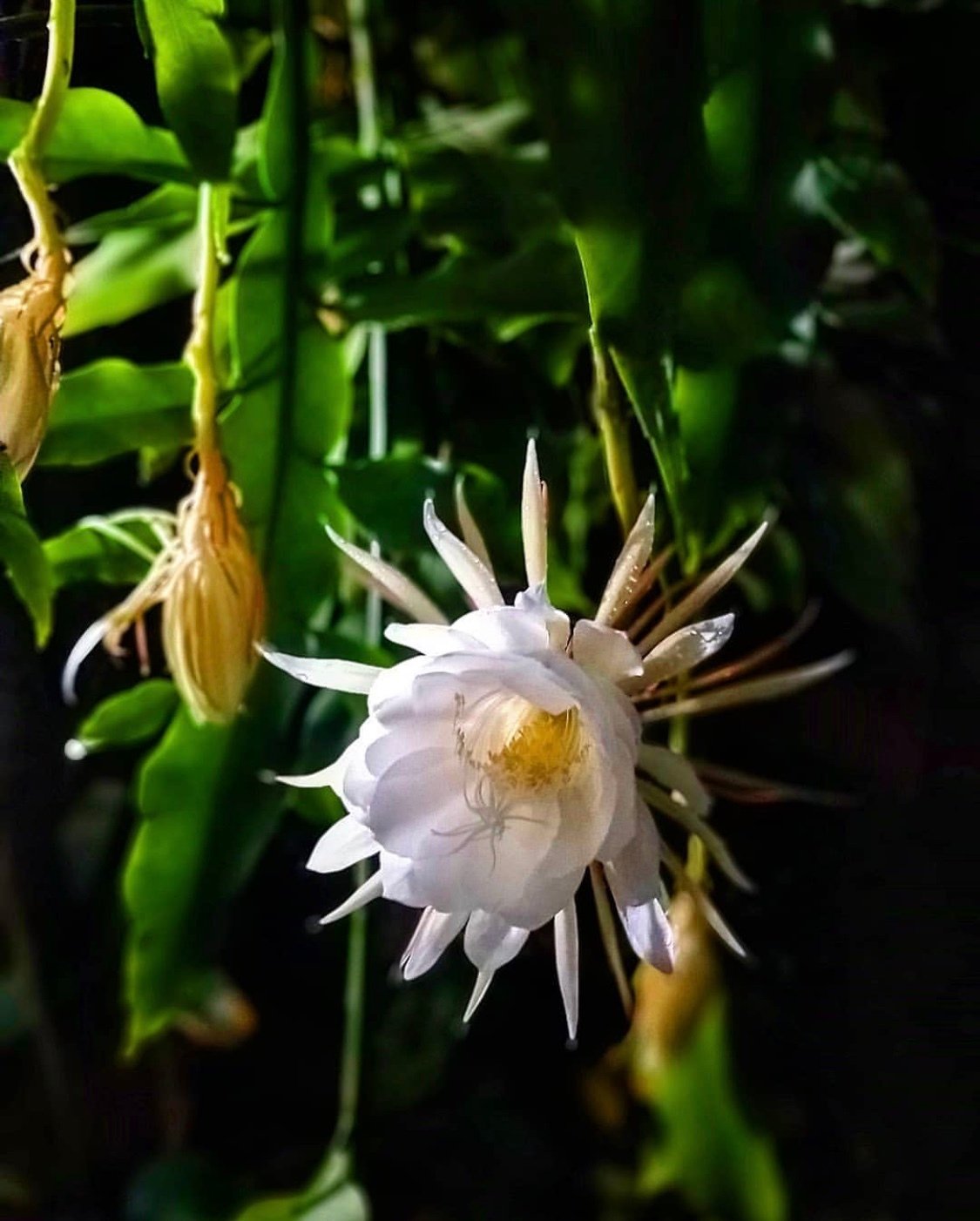 Bright, indirect light is favourable; however, a splash of morning sun won't do too much harm. A position that offers more than two hours of strong direct light must be kept off the cards, due to their susceptibility to sun-scorch. A location within three metres of a north, east or west-facing window, or below a skylight window is the ideal areas.

Queen of the Night Cacti are best grown in moist compost, with half of the soil drying out in between waters. It's essential only to rehydrate once it becomes mostly dry as root rot, caused by over-watering, is a serious threat to those situated in a dark room. Whilst the plant is budding or in bloom, be sure to use lukewarm water to avert shocking its sensitive root systems. Under-watering symptoms include little to no new growth, a much-needed transplant and drying leaves. Over-watering symptoms, on the other hand, include yellowing leaves that soon drop off, little to no growth and root rot. These are common with too much soil moisture, an improper soil medium or deep shade. If the foliage directly above the soil line becomes brown and mushy, the chances are root rot has occurred; take stem cuttings on non-affected growth by following the tips mentioned in 'Propagation'.

As they originate from the tropics of southern Mexico, a steady level of humidity should be at the forefront of its cultivation. Introduce a humidity tray or mist the foliage during the winter to counteract the drying air, caused by operating radiators. The use of artificial humidifiers isn't needed in the summer.

Whilst the plant is budding or in bloom, swap for a potassium-based feed, for example, 'Tomato' food, to prolong the flowering process in the spring. Never directly apply an RTU (Ready to Use) feed without a pre-water first, as this will result in root burn and yellowed leaves. 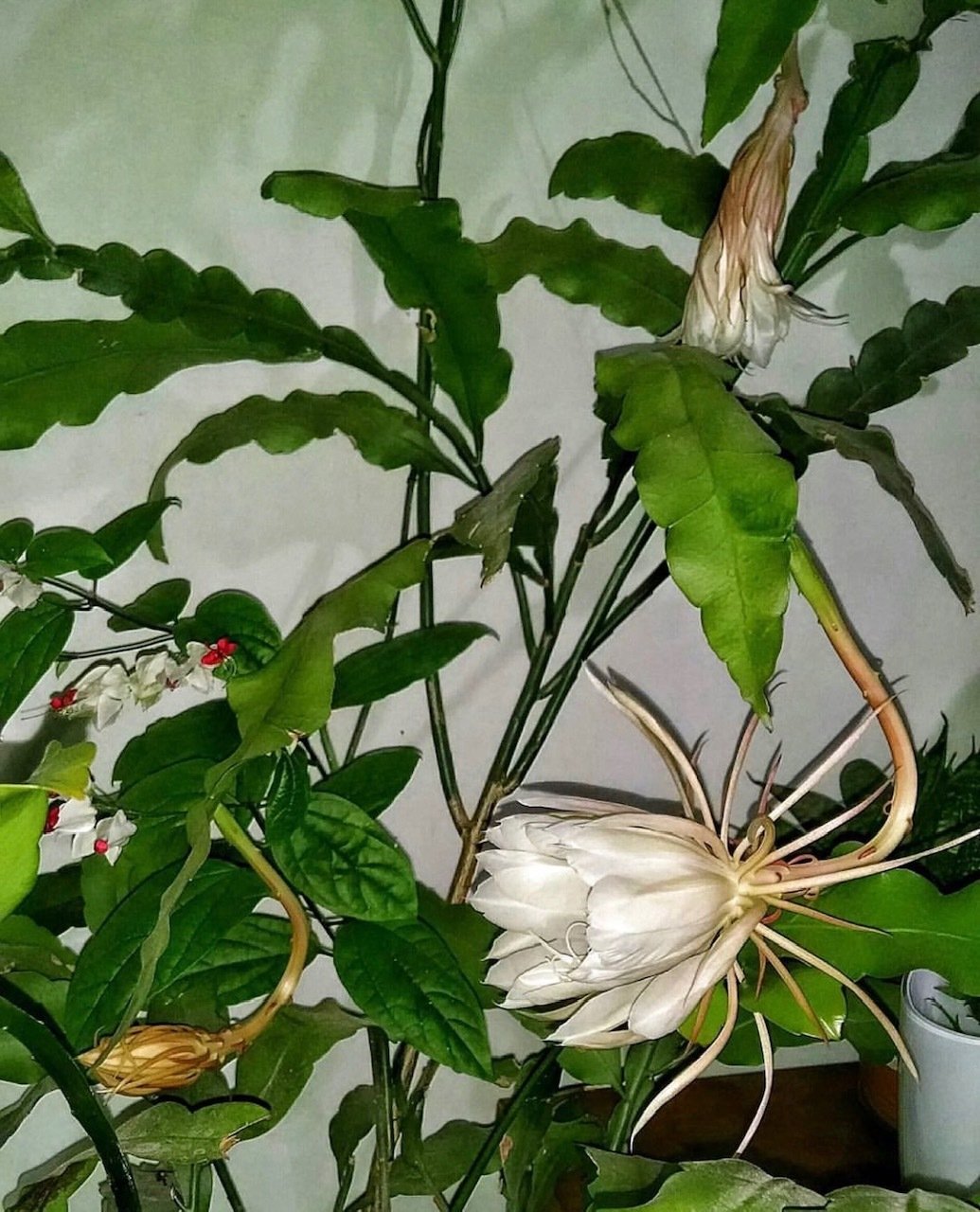 Its flower shaft will emerge from a flattened portion, reaching a length of 30cm. Copyright: @alinecbb

Getting a Queen of the Night Cactus to flower is very difficult because of the species' rareness to flower. A specimen will only flower once it hits maturity, which can take up to six years in some cases. As ukhouseplants been challenged many times on this subject, we've created an acronym to help you through this process - SHORT. The combination of drying soil, cooler temperatures and dark nights will contribute to better flowers in the following season. Repotting isn't mandatory, but instead might hurt the chances because of transplant shock and stress. The following steps must be taken from autumn to winter, to provide the best possible dormancy period.

One or two feeds using 'Cactus & Succulent' Fertiliser is all that is needed for supplementation, as too nutritious soil will reduce the chance of blooms in the summer.

This is the most significant step; reduce the temperature down by around 5℃ compared to the summertime or place in a room that's between 13º - 16℃  (56º - 61℉). You'll be at a significant disadvantage if the ambient temperature is kept constant throughout the year, as this species will only respond in locations that have daily fluctuations of around 5℃. Never exceed the minimum temperature as it may lead to plant death or yellowed foliage at a bare minimum. 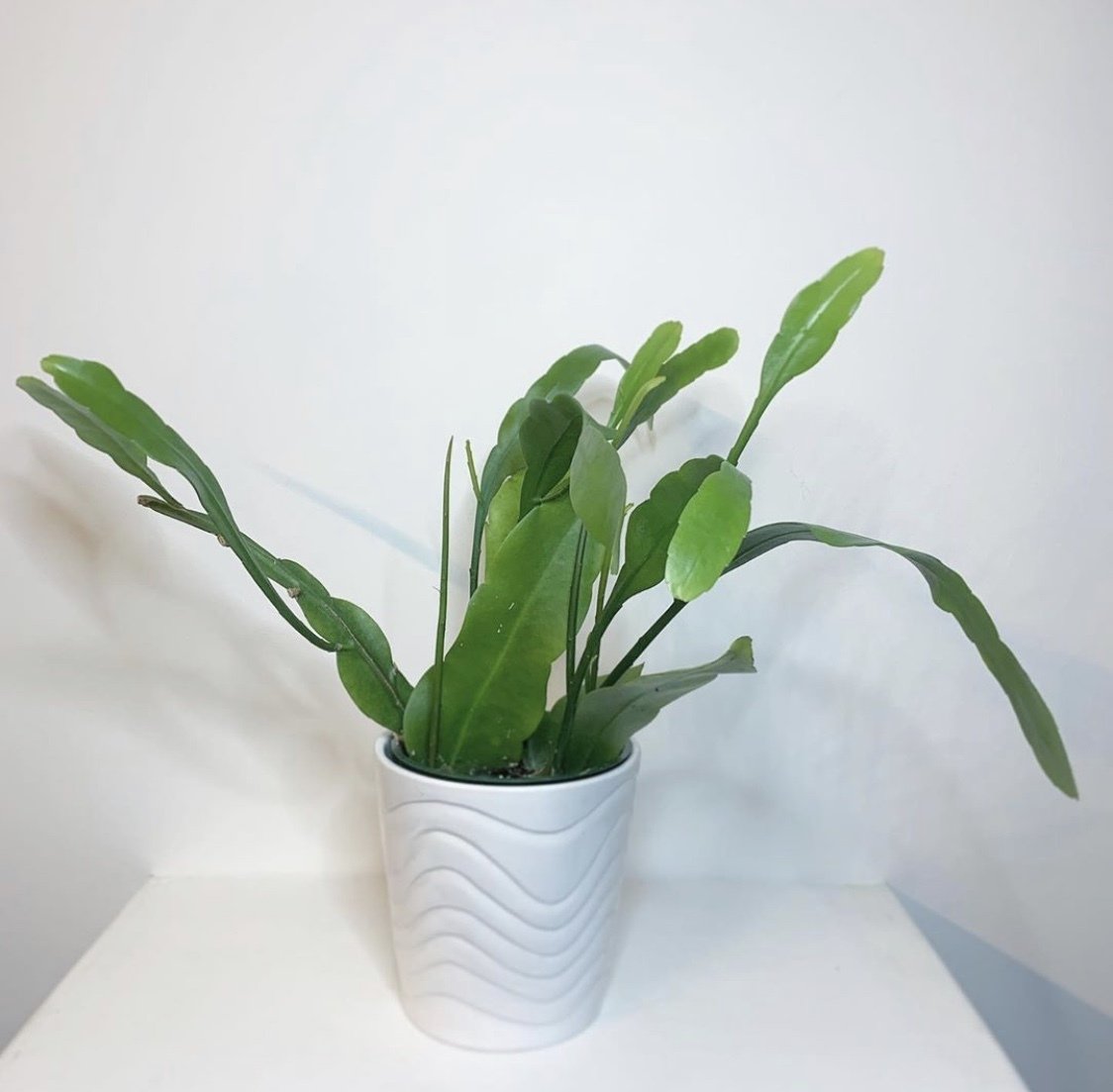 Some specimens can grow up to six FEET in some cases, despite being an epiphyte (growing on trees). Copyright: @liensplantlife

Common Issues with Queen of the Night Cacti 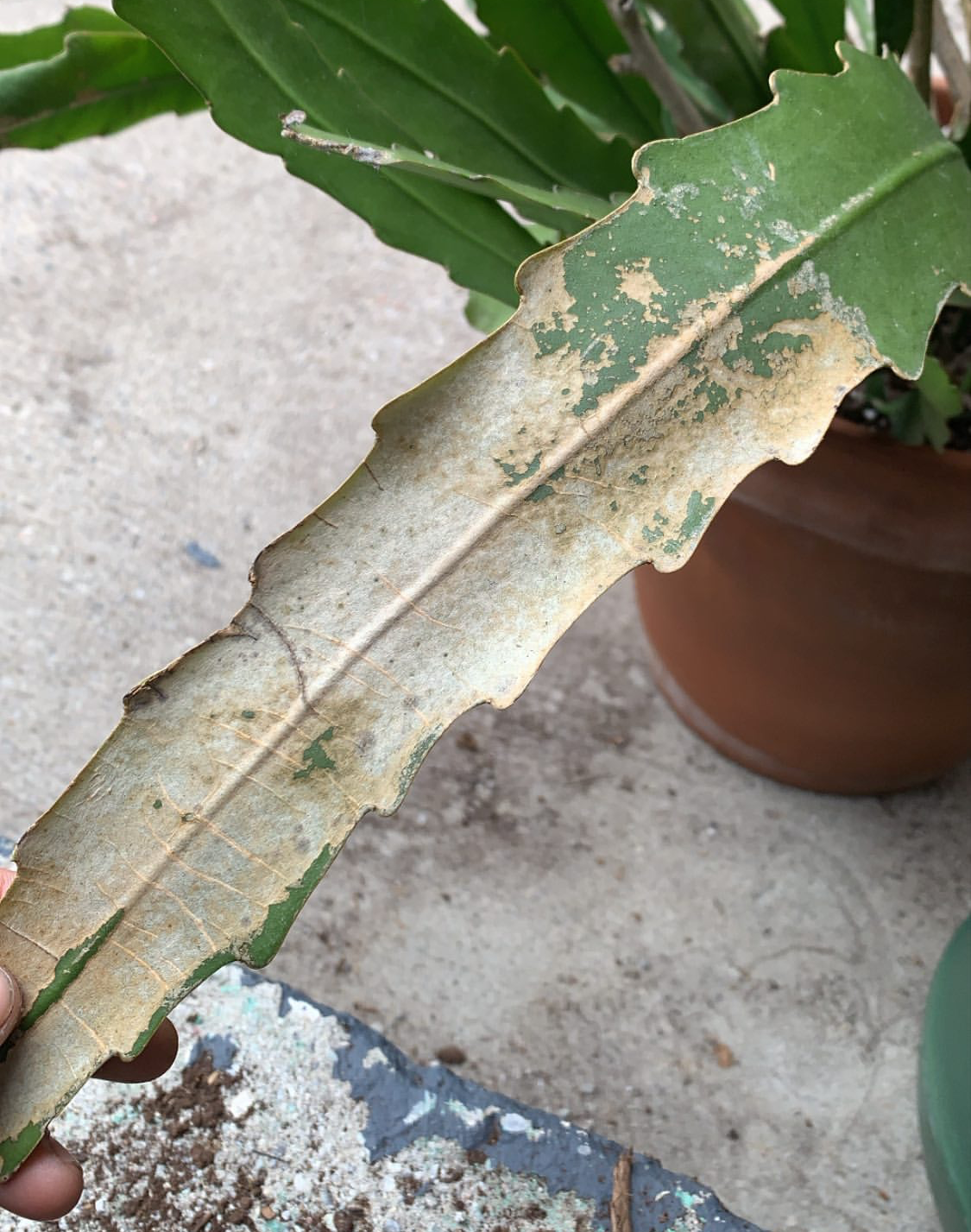 Excessive woodiness is a normal phenomenon with Queen of the Night Cacti. In some cases, it could be the product of over-exposure to the sunlight, but it'll inevitably occur over time as your specimen will mature!

Too much sunlight will cause a red tinge to the foliage. Although Queen of the Night Cacti are best grown in locations offering just a few hours of sun, prolonged periods on non-acclimated specimens will lead to sun-scorch. If yours is a newly-purchased plant, build its tolerance to the sharp rays by increasing the amount of receivable light per week by an hour.

The Queen of the Night Cactus, or Selenicereus oxypetalum, originates from southern Mexico and was first described by Adrian Haworth in the late 18th century as Epiphyllum oxypetalum. Epiphyllum comes from Latin words for 'upon' and 'leaf' that refers to its epiphytic nature. In contrast, Selenicereus derives from Greek to mean 'moon' (in reference to them blooming mostly at night); Oxypetalum is Latin for 'acute petals'. 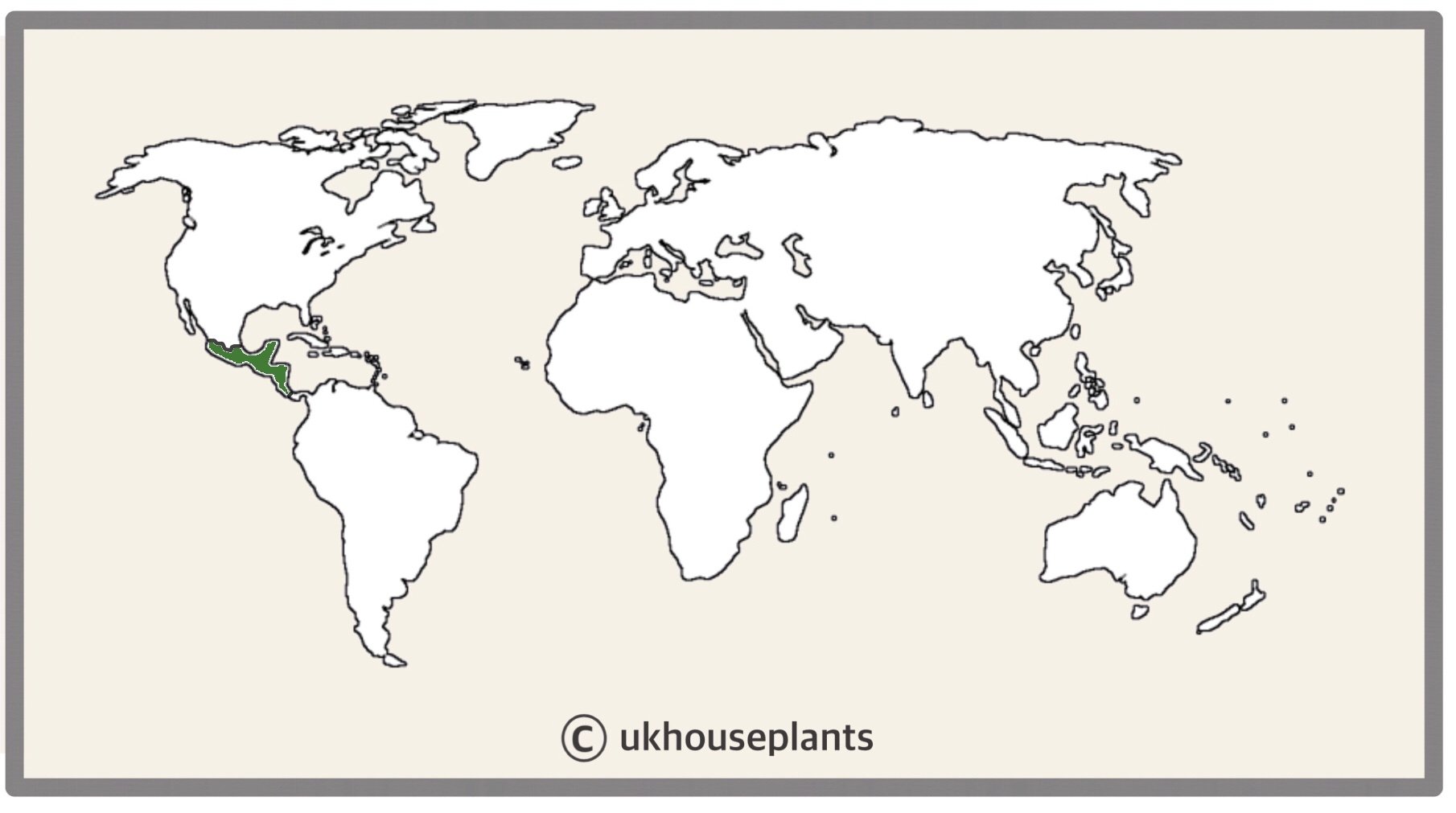 The Distribution of Selenicereus oxypetalum.

10° - 26°C   (50° - 78°F)
H1b (Hardiness Zone 12) - Can be grown outdoors during the summer in a sheltered location with temperatures above 12℃ (54℉), but is fine to remain indoors, too. If you decide to bring this plant outdoors, don't allow it to endure any direct sunlight as it may result in sun-scorch and dehydration. Regularly keep an eye out for pests, especially when re-introducing it back indoors.

Up to 1m in height and 1m in width, with maturity taking up to eight years.

Via Seed or Leaf/Stem cuttings.

A Queen of the Night Cactus will only bloom in the late spring when it reaches maturity. It's white star-shaped flower will only open for a few hours at night, despite taking several weeks to develop. Once the inflorescence begins to wilt, it becomes edible. Be sure to take photos of your specimen in bloom, as the show will only last six hours maximum! 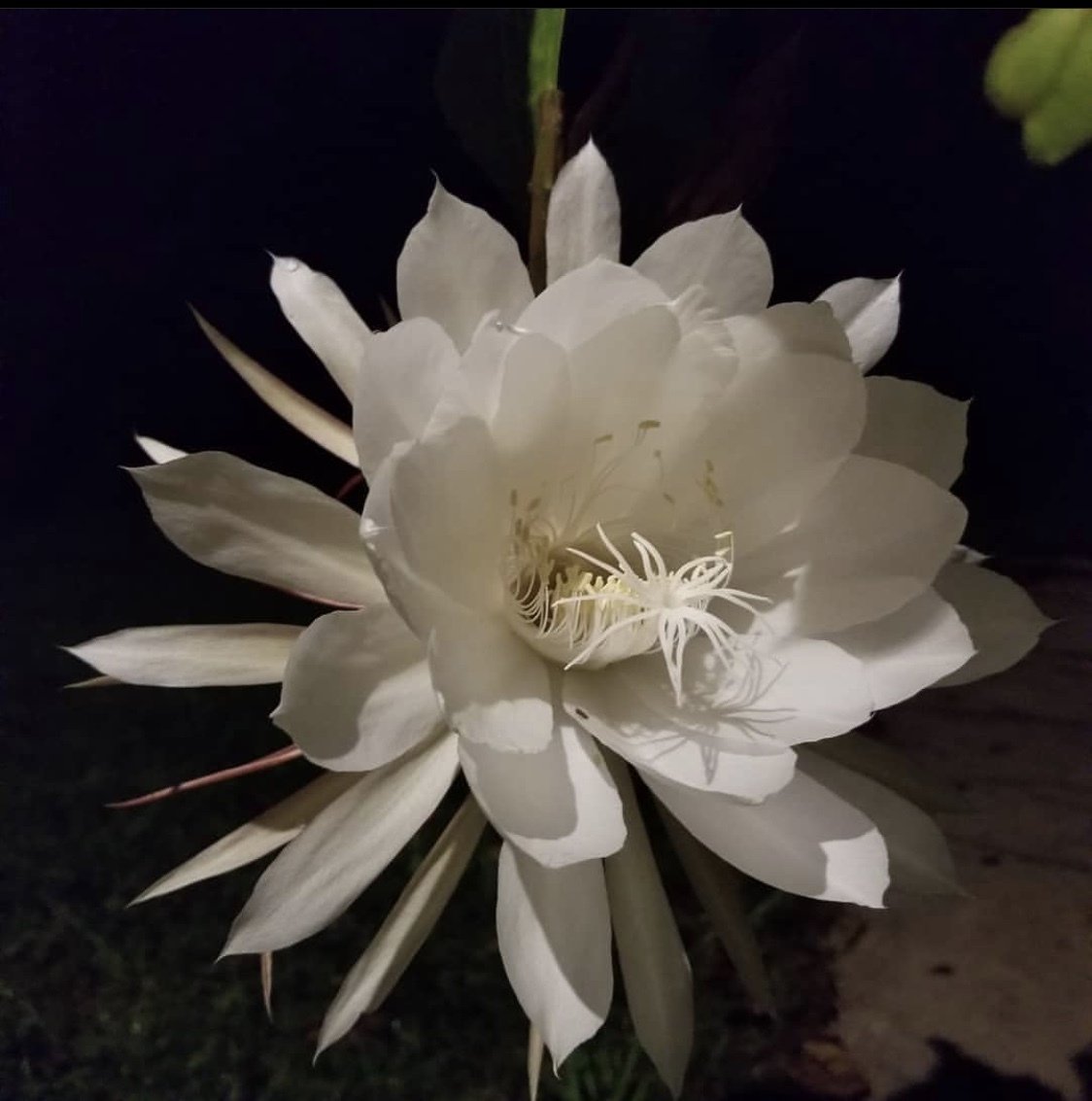 Its inflorescences will only open at night, producing a sweetly-scented fragrance before wilting by the morning. Copyright: @firkingood

Repot every two years in the spring, using a 'Cactus & Succulent' labelled potting mix and the next sized pot with adequate drainage. They're far better being potbound for several years due to the heightened risk of root rot and repotting-issues (like transplant shock), so only repot if you feel it's wholly necessary - restricted root growth will also increase the chance of blooms, too.

Keep an eye out for mealybugs, spider mites, whitefly, scale & vine weevils. Typical diseases associated with Queen of the Night Cacti are root or leaf rot, leaf-spot disease & powdery mildew. For more information on how to address any of these issues, click on this link - Identifying Common Houseplant Pests & Diseases

Queen of the Night Cacti are classified as non-poisonous. If large quantities of the plant are eaten, vomiting, nausea and a loss of appetite could occur.