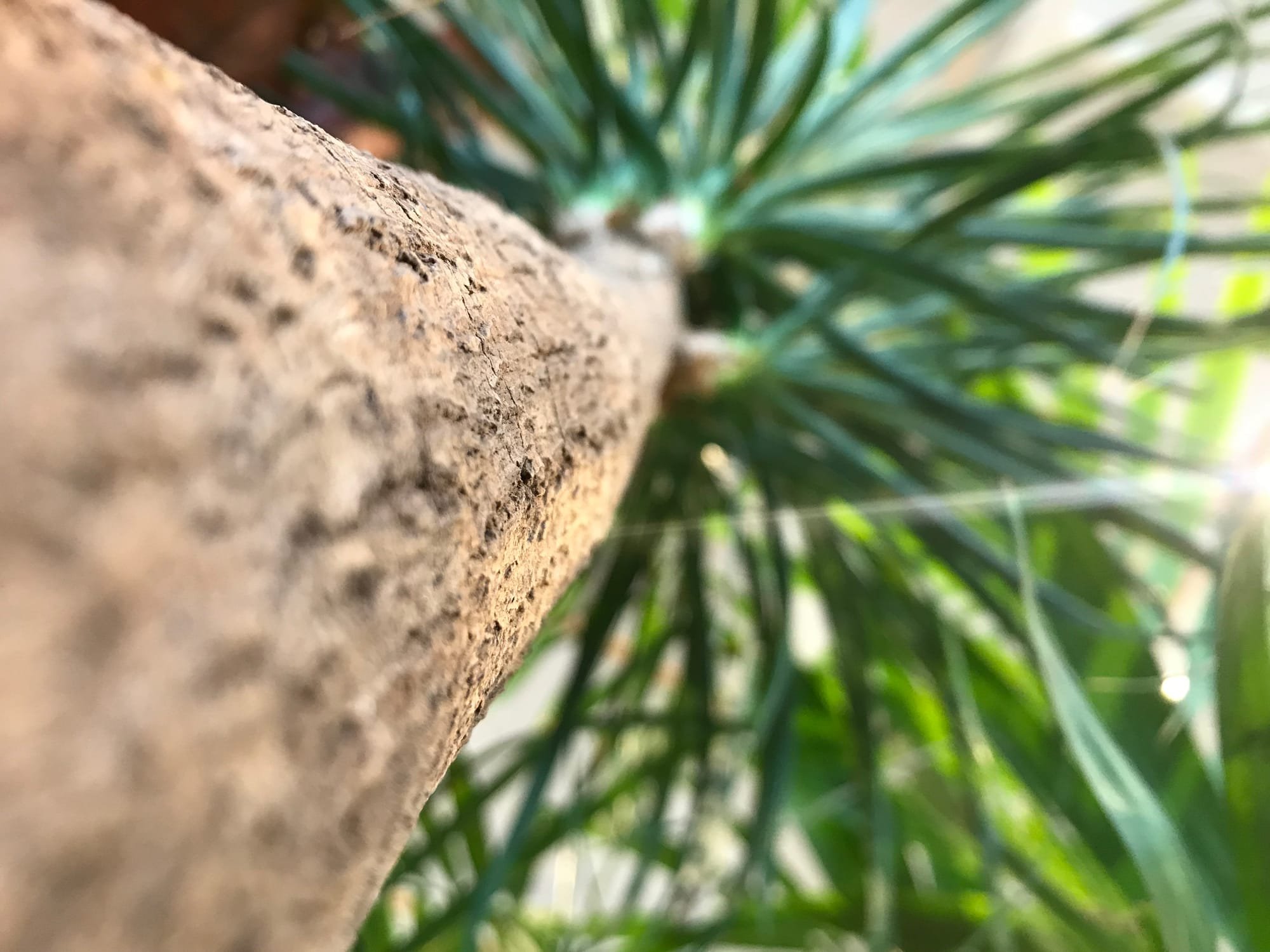 A shady location must be off the cards at all costs. If possible, throw in some direct sun, avoiding intense sunlight during the peak hours of summer as this can easily lead to sun scorch. It's also highly beneficial to place a Beaucarnea outside in summer, as long as the nighttime temperatures are above 10°C (50°F) in a semi-shaded environment for better quality growth.

The ideal location around the house would be in a partially heated conservatory or within three metres of a north, east or west-facing window. Within two metres of a south-facing window is also acceptable during the autumn and winter, but it'll be too intense in the height of summer.

Even though Beaucarnea aren't a succulent, the ukhouseplants saying of 'droughts between drenches' should strongly be associated with them. Not only will over-watering lead to root rot, but it can also travel into the core of the plant (the trunk), destroying the plant from the inside out. In the spring and summer, allow the soil to almost dry out before giving a generous drench, while reducing this further in the colder months. A trick to reduce the chances of root rot (common) is to water over a sink, or somewhere that the excess moisture can freely drain out to reduce the possibility of the fungal disease. Under-watering symptoms include pale leaves, stunted growth and gradual decline. Although they can endure a generous amount of sunlight, try and keep the soil moisture slightly higher for the promotion of new growth. Over-watering symptoms include yellowing leaves, zero growth and a mushy stem. Never allow the roots to sit in standing water, or allow the soil to remain soggy as both will entice root rot. The final note to mention is that for those situated in dark locations, their compost must be watered far less than those in brighter spots to downplay the risk of rot and disease.

Supplement at monthly intervals using a houseplant-based fertiliser. Never apply a 'ready-to-pour' feeds into the soil without a pre-water beforehand, as dry roots and sharp chemicals won't mix well. 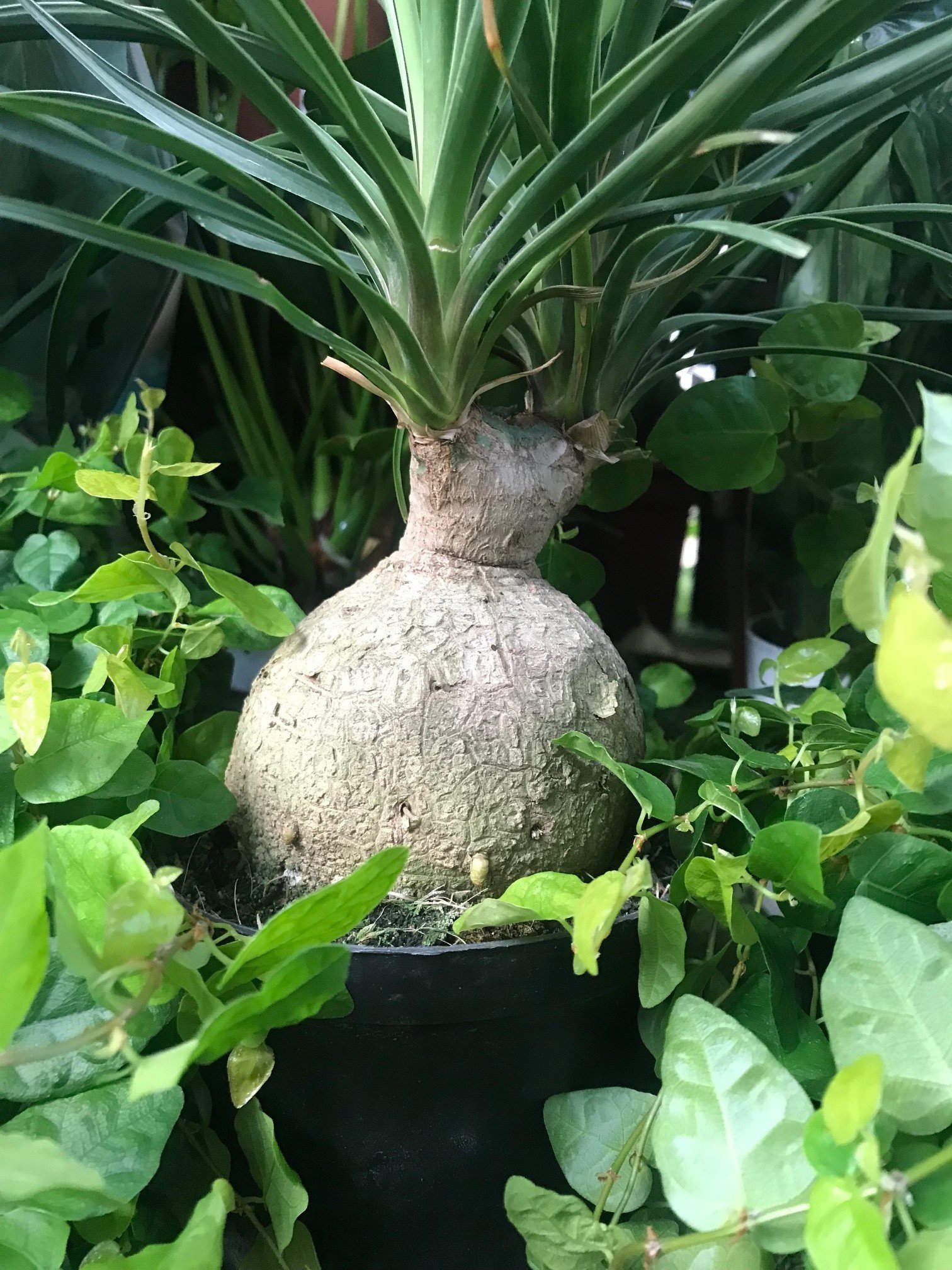 Because of its swollen caudex, Beaucarnea can survive up to eight weeks in a semi-shaded area without any water. Always keep this in mind when potentially over-watering.

Yellowing lower leaves - If the lower leaves slowly die off over time, this is natural and inevitable. However, if there is evidence of stunted growth, overly moist soil and simultaneous lower leaf drop, relocate it to a brighter location and potentially reduce irrigations. For more severe symptoms, inspect the rootball for root rot and click on this link if it show signs of decay.

Curled leaves and dried brown edges are the result of too little water and over-exposure to the sun. Although they can naturally do well in sun-filled locations, those that haven't acclimatised to the harsh rays will show signs of sun-scorch and environmental shock. Gradually increase the amount of light every few days, starting from an indirect location to a few hours of morning/evening sun over a few weeks. Prolonged exposure will significantly speed the process of dehydration, so consider transplantation into a bigger pot in the Spring to wrap the roots around moister soil.

Never allow temperatures to dip below 8ºC  (46ºF)  as irreversible damage will occur in the likes of yellow foliage and a weakened health. When this happens, remove the severely affected areas and immediately improve growing conditions - never cut through softened yellow growth, and only around brown, crispy squares. As rehabilitation can take several months because of its slow-growing nature, be sure to provide a stable location with better growing conditions to speed this process.

Mould developing on the soil means two things - too little light and over-watering. Despite the harmlessness of the mould, it'll prove unsightly to most gardeners and is therefore removed once known. To remove, replace the top two inches of the soil for a fresh batch of Cactus & Succulent Compost. Either increase the amount of light received (no direct sunlight for the first few weeks to prevent environmental shock) or decrease the frequency of waters slightly. If the mould is accompanied by yellowing lower leaves, you may also have a case of root rot.

Beaucarnea derives from Latin, translating to 'good harvest' with the genus symbolising both strength and imperturbability. The B. recurvata was first formally described in 1861 by a French botanist, Charles Lemaire who had a keen interest in ferns and seed-baring plants. Despite its firm place as a Beaucarnea today, 20th-century taxonomists initially placed the genus in Nolinoideae (hence the synonym, Nolina) but were reclassified back as Beaucarnea after extensive genetic research. 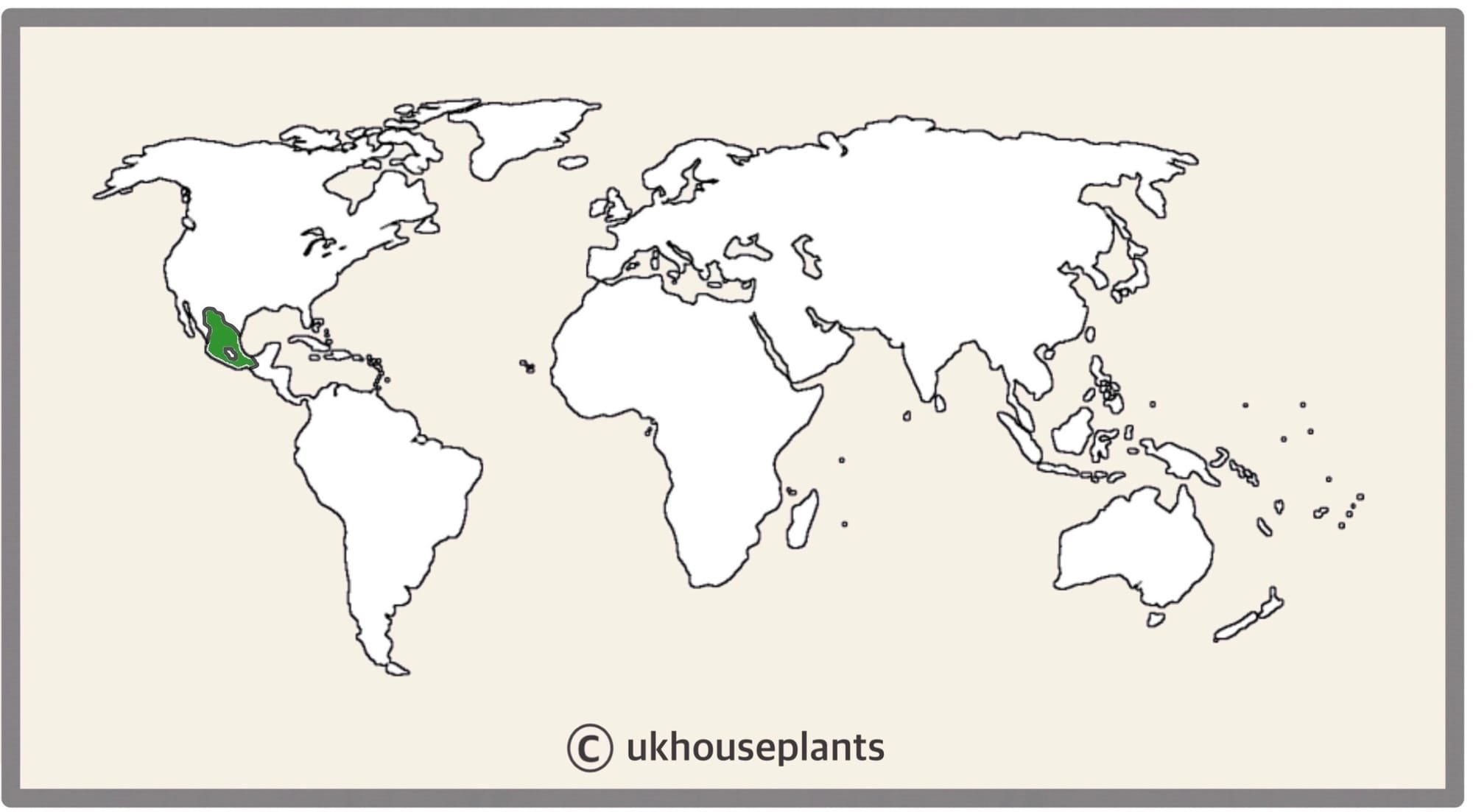 The Distribution of Ponytail Palms

10° - 27°C   (50° - 80°F)
H1c  (Hardiness Zone 11)  - Can be grown outdoors between late spring and summer throughout most of the UK while nighttime temperatures are above 10℃ (50℉). If you decide to bring the plant outdoors, don't allow it to endure more than an hour of direct sunlight a day as it may result in sun-scorch. Regularly keep an eye out for pests, especially when re-introducing back indoors.

Over 2m in height and 0.7m in width once they reach maturity. The ultimate height will take between 8 - 20 years to achieve with up to 10cm of growth per season.

Basal Offset Division - Your plant will produce several basal offsets that can be separated once they have a sufficient root system, and surpass 30cm (11 inches) in height. If possible, water the soil 24hrs before the main event to reduce the risk of transplant shock, when its dry root systems are over-fingered. Take the plant out of its pot and place your fingers close to the nodal junction - soil may have to be removed for better access. Push the chosen offset downwards until you hear a snap. Separate the foliage and its root system away from the mother plant, mentally noting the high risk of damage. Transplant in the appropriate sized pot with a fresh batch of Cactus & Succulent Compost. Maintain evenly moist soil and situate it in a bright, indirect location away from any direct sunlight. After ten weeks, treat it like a normal specimen, following the care tips above!

Beaucarnea will only bloom once maturity is reached, with its flowers largely resemble those of Yuccas. Feather-like panicles of white or red flowers will erect high above its foliage, in the attempt of attracting airborne pollinators. The blooming period can last up to several weeks in the summer, with the seedpods taking up to three months to fully develop. 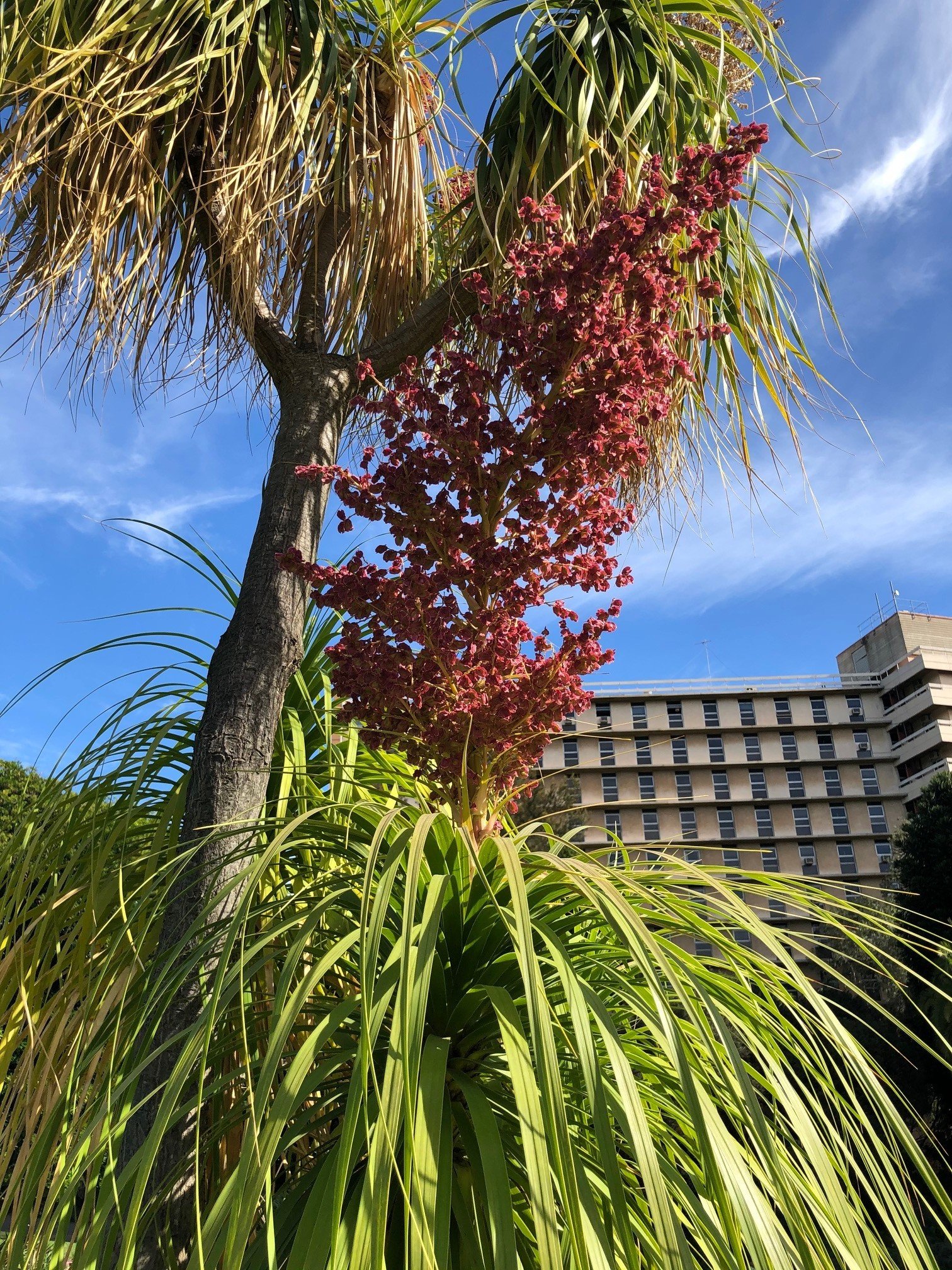 The inflorescences of a Beaucarnia recurvata.

Repot every three years in the spring using a Cactus & Succulent Compost and the next sized pot with adequate drainage. If you have any Bonsai Compost on hand, this will also do the trick, too. Hydrate the plant 24hrs before the tinkering with the roots to prevent the risk of transplant shock. For those that are situated in a darker location, add a thin layer of small grit in the pot's base to improve drainage and downplay over-watering. Click here for a detailed step-by-step guide on transplantation, or via this link to learn about repotting with root rot.
If you're still unsure of what to do, don't hesitate to send us an email or direct message to get our expert advice on transplantation.

Keep an eye out for mealybugs, aphids, spider mite, scale, thrips, whitefly, blackfly, vine weevils & root mealybugs that'll locate themselves in the cubbyholes and undersides of the leaves, with the exception of the latter two in the soil. Common diseases associated with this plant are root rot, leaf-spot disease, botrytis, powdery mildew & southern blight - click here to learn more about these issues.

This plant is classified as poisonous so keep away from pets and children who have tendencies to eat the leaves. If parts of the plants are digested, vomiting, nausea and a loss of appetite could occur. Consumption of large quantities must be dealt with quickly; acquire medical assistance for further information.

Please note that the leaves' edges are razor sharp, so always wear protective gloves when handling.