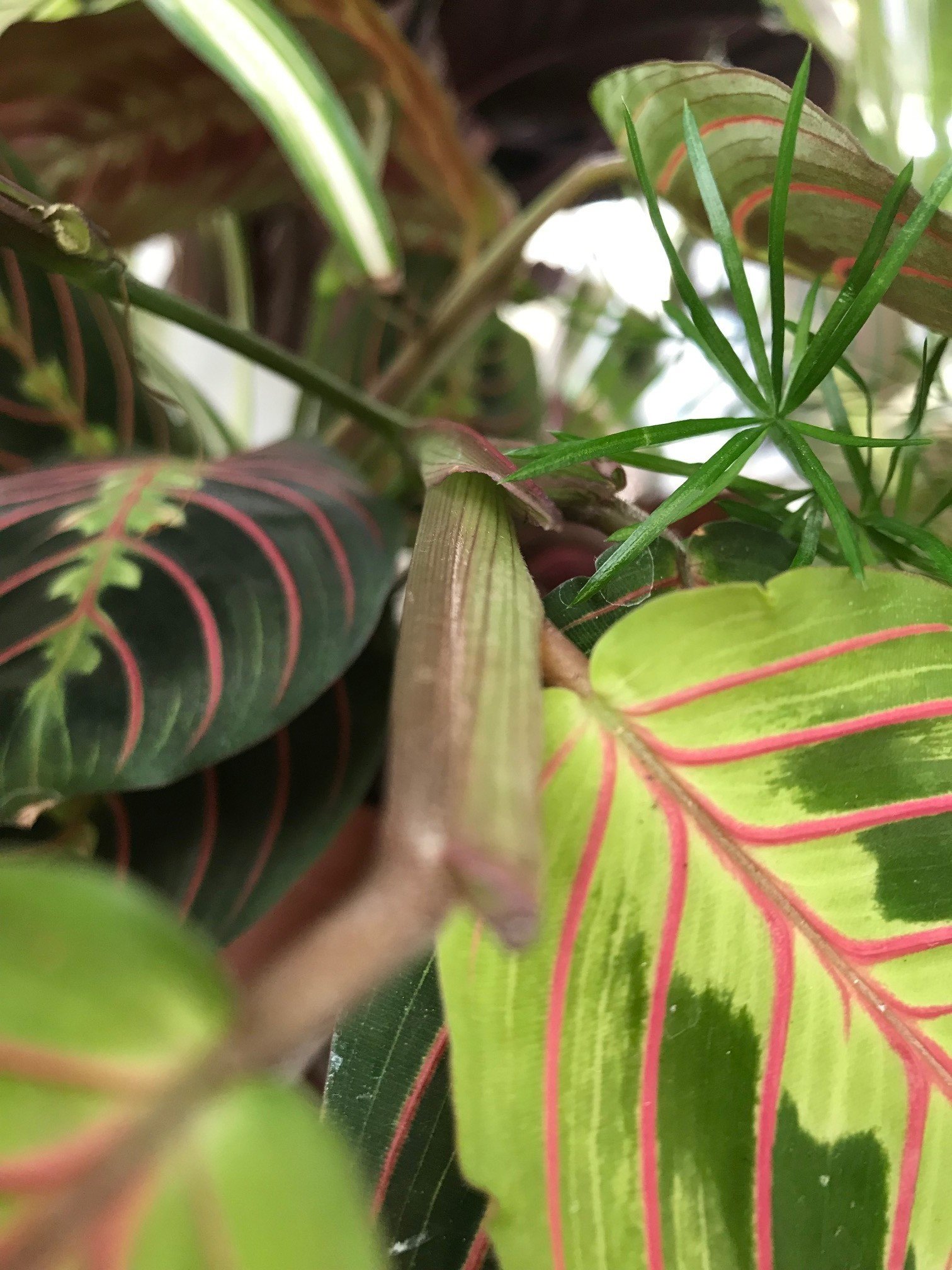 Need the answer to a specific plant query, for instance, root rot or yellowing leaves? Book a 1-to-1 video call with Joe Bagley, the website's friendly author, to overcome and address your niggling problem! Available on iMessage, WhatsApp, Facebook Messenger & more.

Perfecting the amount of light a Maranta receives is crucial for a long-lasting specimen. During the spring and summer, be sure to provide a brightly lit spot away from any direct light. Excessive exposure during this time will negatively affect the plant in the likes of sun scorch and dehydration. Once the autumn kicks in, include an hour or two of morning sunlight per day to get it through the dormancy period, lasting until the following spring. Always ensure thorough soil moisture while under the sun's rays.

If the Maranta has red undersides, a shadier position in a house is also acceptable because of their ability to absorb light through the backs of their leaves via the simple mechanism of the colour itself! If, however, its nyctinastic movements become less prolific, you're running the risk of too low light and weakened health.

Allow the top quarter of the soil to dry out in between waters during spring and summer, reducing this further in the dormancy period. Under-watering symptoms include crispy or distorted new growth, curling leaves, crispy or dry patches and yellowing leaves. Juvenile specimens that lack a sufficient rhizome system are most likely to be hard-hit by extended periods droughts, due to their inefficient capability to store moisture. Scroll down to 'Common Issues' for more information on addressing a total loss of foliage. Over-watering symptoms include rapidly yellowing leaves, leaf spot disease, stem collapse and plant death. These issues are commonly caused by too little light/heat, poor cultivation habits or water-logging.

Create a humidity tray to provide a moist and stable environment for your plant. If the surrounding saturation is too low or the heat too high, its leaves may start to brown over and curl, especially in direct sunlight. Hose the foliage down from time to time to hydrate the leaves and keep the dust levels down. Those situated in either a bathroom or a dark location must not be over-misted as too much moisture surrounding the foliage will result in powdery mildew and leaf-spot disease. 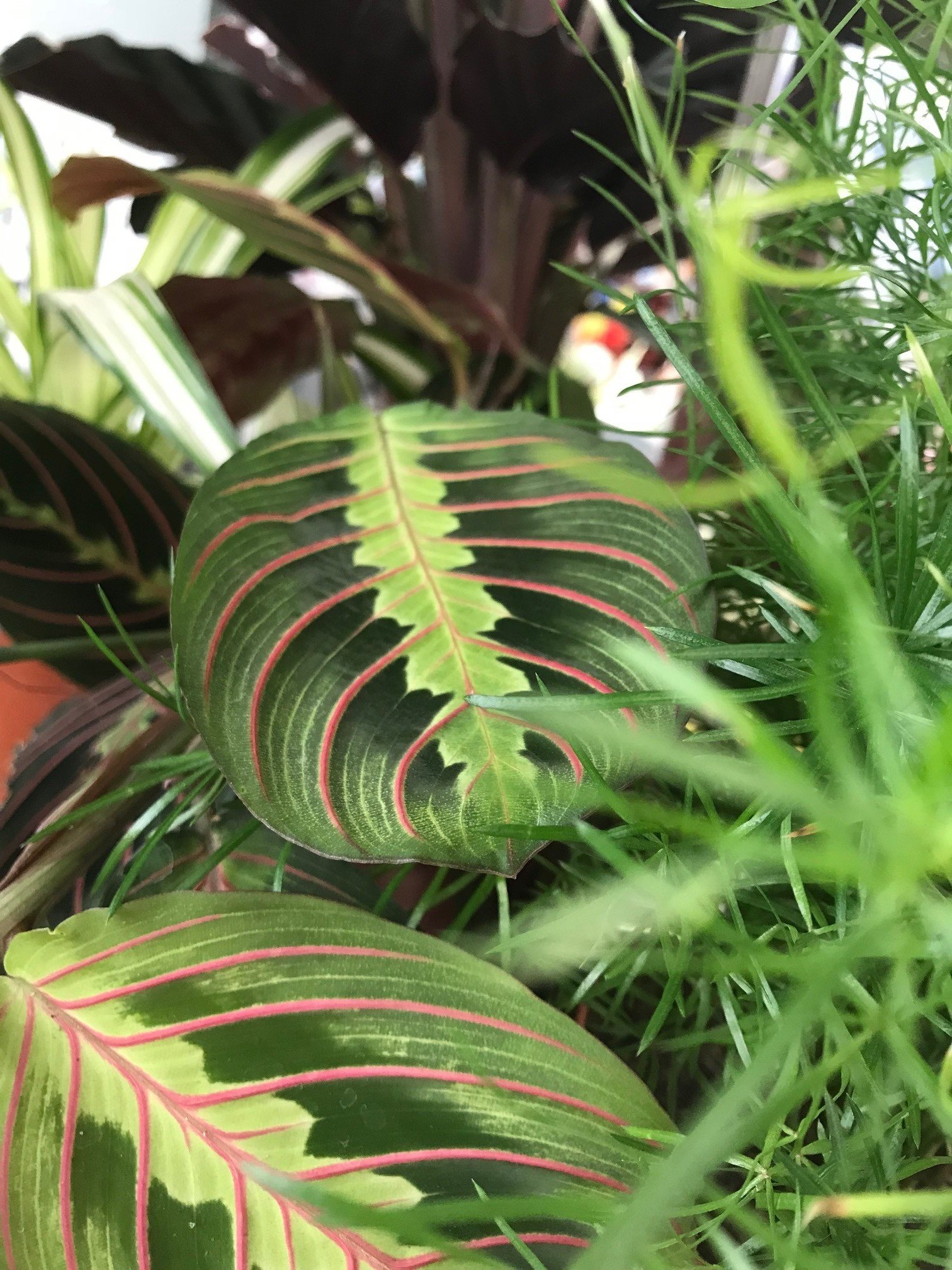 The species' epithet, leuconeura, can be translated from Latin to mean 'white viens', in reference to the foliage's variegations.

When a Maranta is severely dehydrated, most of its leaves will crisp-up and fall off - leaving you with a naked stem. Although it may spell the end of juvenile plantlets, there may still be light at the end of the tunnel for more established specimens. If its stem (or rhizomes for more severe cases) is still plump without any signs of retraction, prune-away the seriously affected areas and contain the plant (with its pot) in a transparent bag that has small holes. Keep the soil relatively moist, providing a good level of indirect light and temperatures above 15°C  (59°F). After a few weeks, new life will form in the nodal junctions on the stems, signalling the start of its recovery process. If you're solely relying on rhizomatous growths to reappear, wait up to eight weeks for new growths to develop from the soil line. Once the specimen produces its second leaf, release it back into the open air with a humidity tray to alleviate the severity of environmental shock. Not only will this ease the specimen back into normal functioning life, but it'll also reduce the rate of transpiration (water-loss in the leaves), and therefore downplay the risk of dehydration and further decline.

Too much sunlight will lead to sun scorch, with typical signs including browning or crispy leaves, dry leaf-edges, sunken leaves or stunted growth. Although too little light will cause over-watering issues, excess sunlight will be a detriment to the plant as well. If yours has fallen short of this, reduce the amount of the sun considerably and always be mindful of environmental shock (when two locations offer too different growing conditions). Remove some of the affected leaves and increase waters slightly.

Always use lukewarm water, and if you choose to use tap water, allow it to stand for at least 24hrs before application. Maranta tend to be quite sensitive to temperature change, so pouring cold tap water immediately into the pot will not only add fluoride into the soil, but it could even cause yellowed leaf-edges over time.

Maranta is a genus consisting of fifty species, native to the tropical Americas. It was first described by Carl Linnaeus in 1753, honouring Italian botanist, Bartolomeo Maranta, who performed most of his work in the mid-sixteenth-century. Marantaceæ is the taxonomic family of Maranta, as well as the closely related genera of Calathea, Ctenanthe & Afrocalathea. 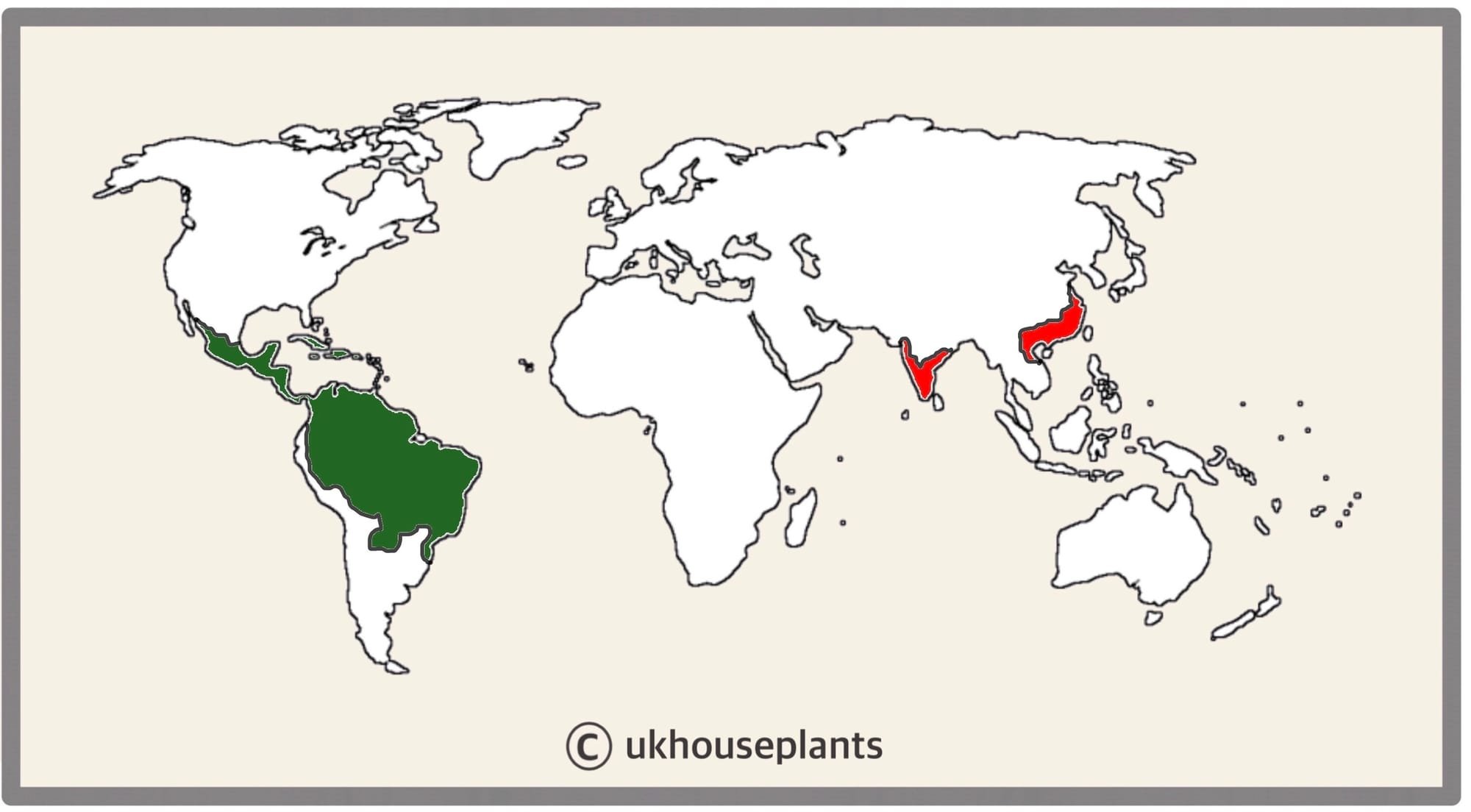 The Distribution of Maranta in Green, with several species being introduced in China & India (Red).

Up to 1.2m in both height & width when reaching their maturity of five years, with up to 15cm of new growth being developed each season.

Rhizome Division (Moderate) - Separating the basal offsets into their own pot will not only expand your plant collection, but it'll also slow the process of becoming pot bound. The best time to divide is during the spring, with the stem's length surpassing 15cm (6 inches). Gently brush away some of the soil to gain better access to the offset's base (it may be slightly under the soil line) where the roots will be housed. While using a clean pair of secateurs or scissors, cut the stem with at least two root nodes attached to its base and two leaves. Set the offset in an appropriate-sized pot with adequate drainage and a 'Houseplant' labelled compost. The ideal location would provide bright, indirect light and temperatures above 15℃ (59℉). Maintain evenly moist soil, allowing the top third to dry out in between hydrations. After a month or two, treat it like a matured specimen by using the care tips mentioned above!

Repot every two years in spring using a 'Houseplant' labelled compost and the next sized pot with adequate drainage. Hydrate the plant 24hrs before tinkering with the roots to prevent the risk of transplant shock. For those that are situated in a darker location, add a thin layer of small grit in the pot's base to improve drainage and downplay over-watering. Click here for a detailed step-by-step guide on transplantation, or via this link to learn about repotting with root rot.

Keep an eye out for mealybugs, spider mites, thrips, whitefly & root mealybugs that'll locate themselves in the cubbyholes and undersides of the leaves, with the exception of the latter in soil. Common diseases associated with Maranta are root rot, leaf-spot disease, botrytis, rust, powdery mildew & southern blight - click here to learn more about these issues.