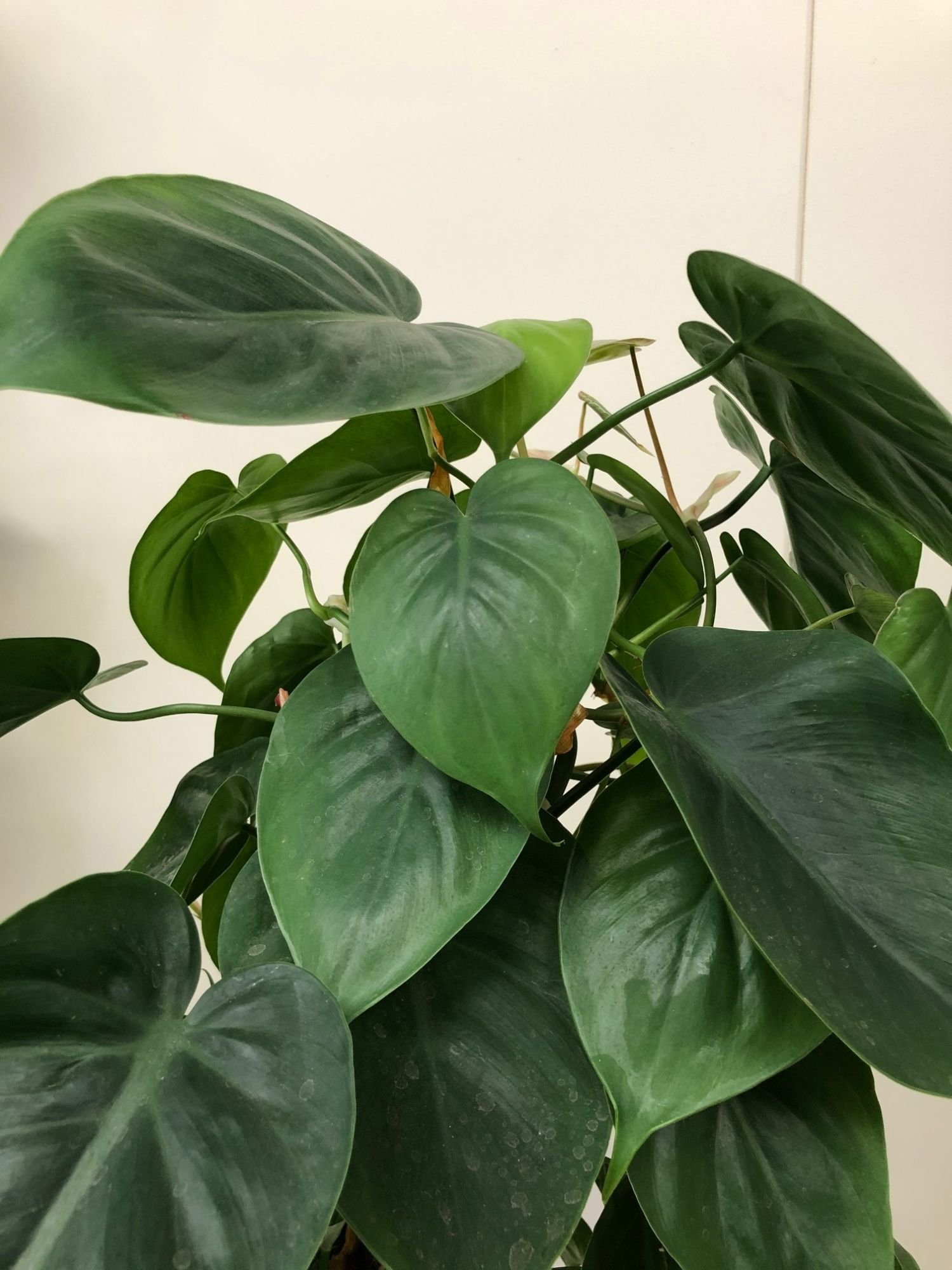 Need the answer to a specific plant issue? Book a 1-to-1 video call with Joe Bagley, the website's friendly author, to overcome and address your niggling problem! Available on iMessage, WhatsApp, Facebook Messenger & more.

A brightly lit location with little or no direct sun is best; however, a darker position is still acceptable, too. One word of advice to mention is that vines grown in a darker setting will significantly increase the chance of root rot, as well as variegated plants losing their colourful patterns. Strong all-day sunlight should be avoided at all costs, due to the combination of too little soil moisture and over-exposure significantly damaging the plant's health over time.

Remember - The amount of light and current season of the year will directly govern the frequencies of waters per month. Specimens placed in darker areas must be kept on the drier side to life, whereas brighter locations will require more soil moisture to lubricate photosynthesis.

During the spring and summer, allow the top third of the soil to become dry in between waters, reducing this further to replicate its dormancy period in the autumn and winter. Due to the sensitivity of their root systems, never apply cold water as it may weaken its health and well-being over time. For those that use tap water (instead of rainwater or fresh bottled water), allow it to stand for at least 24hrs to eliminate the high levels of chloride and fluoride found from the tap. Under-watering symptoms include stunted growth, crispy brown patches developing on the foliage and leaf curling. If your plant receives prolonged periods of direct sunlight, relocate it immediately; over-exposure to the sun will continue to contribute to its dehydration, slowly destroying the plant from the inside-out. Over-watering symptoms include a rotting stem, mould developing on the soil and rapid lower leaf loss. These issues are typical for those situated in darker locations; if abnormal leaf loss occurs, especially at its base, it is most likely to be a case of root rot. For further advice on this issue, be sure to click on the following link.

Although average room humidity is acceptable, be sure to introduce a pebble tray to increase the local humidity while the heaters are operating. Then at monthly intervals, gently hose the foliage down to hydrate the leaves and wash away the thin layer of dust from its pores. Keep the tray topped up with water to maintain this necessity over the colder months of the year.

Feed every four waters during the growing period and every six in the autumn and winter, using a 'Houseplant' labelled fertiliser. Never apply a 'ready to use’ product into the soil without a pre-water first, as it may burn the roots and lead to yellowed leaves.

Pests could arise at any time, with infestations starting from the original nursery or via contamination in your home. With Philodendrons, Spider Mites and Mealybugs tend to be the usual inhabitants, with the first being minute and almost transparent, roaming the leaves in search of chlorophyll and a site to hide its eggs. The latter, however, will stand out much more, with white cottony webs developing across the foliage and stems. Thoroughly check the plant's cubbyholes before giving it the all-clear, or click on the appropriate links to learn more about eradicating these issues.

Always use lukewarm water, and if you choose to use tap water, allow it to stand for at least 24hrs before application. Philodendrons tend to be quite sensitive to temperature change, so pouring cold tap water immediately into the pot will not only add fluoride into the soil, but it could even lead to yellowed leaves over time!

Curled leaves and brown leaf-edges are the result of too little water and over-exposure to the sun. Philodendrons are best located in bright, indirect settings, and those that haven't acclimatised to the harsh rays will show signs of sun-scorch and environmental shock. A splash of winter sunlight is acceptable as long as the soil moisture is regularly observed, with complete avoidance once summer comes along.

Philodendrons form part of the Araceae family that holds genera such as Peace Lillies, Alocasia and ZZ Plants. Since its initial classification by Nicolaus von Jacquin in 1775, the species has had many names including Arum hederaceum and P. scandens. The latter synonym, P. scandens, was created by a German botanist named Karl Koch in the mid 19th century with 'scandens' being the Latin word for 'climbing', in reference to its epiphytic nature. It's current name, P. hederaceum is a direct nod to the genus, Hedera, that consists of woody hemiempiythic species native to Europe and Asia. 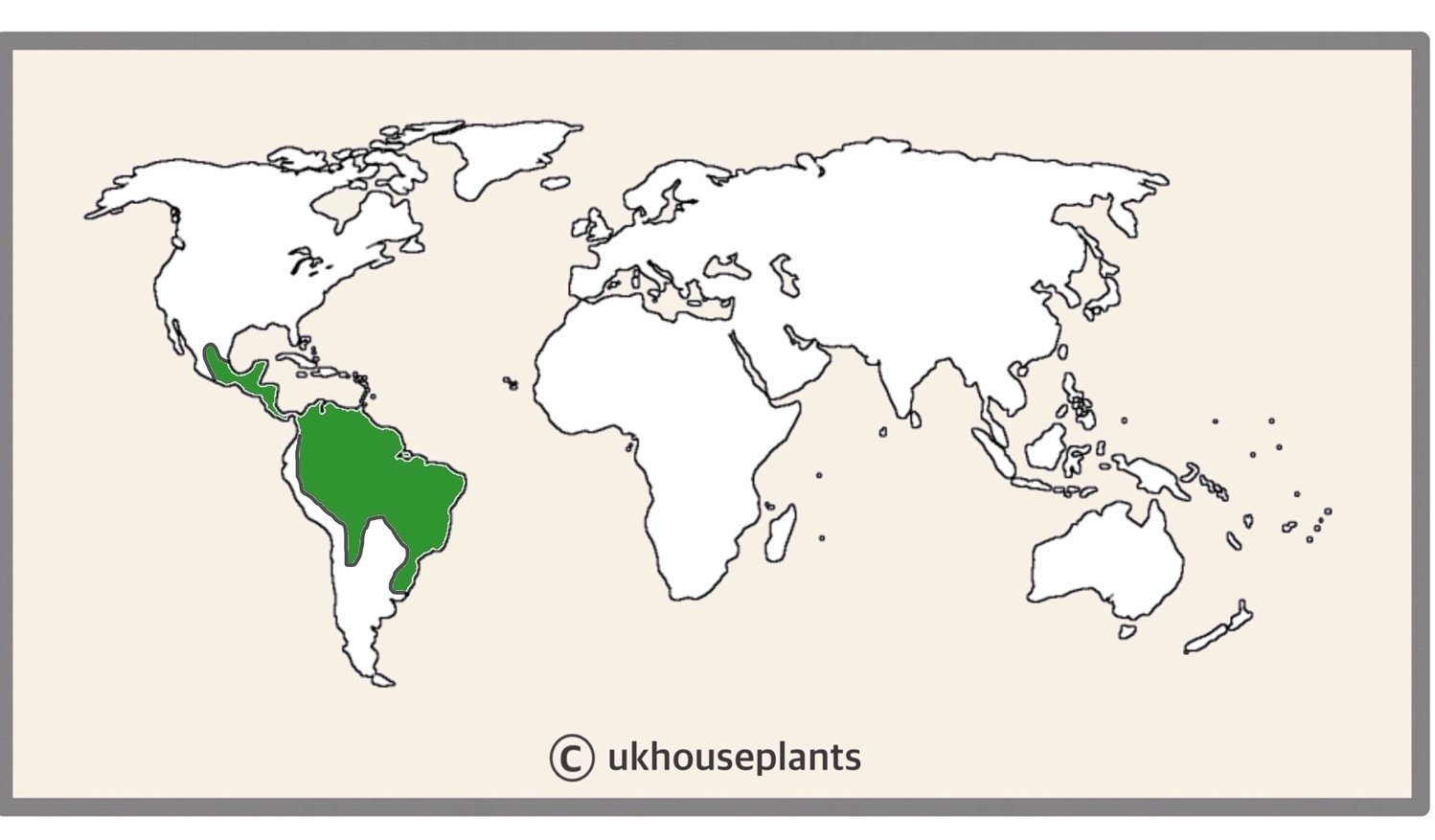 The Distribution of P. hederaceum

Up to 2m in height and 3m in width, when given a structure to climb up. The ultimate height will take between 3 - 6 years to achieve with up to 40cm of new growth per year. Specimens that naturally grow in the wild can reach heights of up to fifteen metres; however, with smaller root systems and less favourable growing conditions, they'll only grow to three metres, give or take.

Although the aerial roots aren't exactly appealing, do not remove them as it may put stress upon the plant and potentially could weaken it with potential diseases. 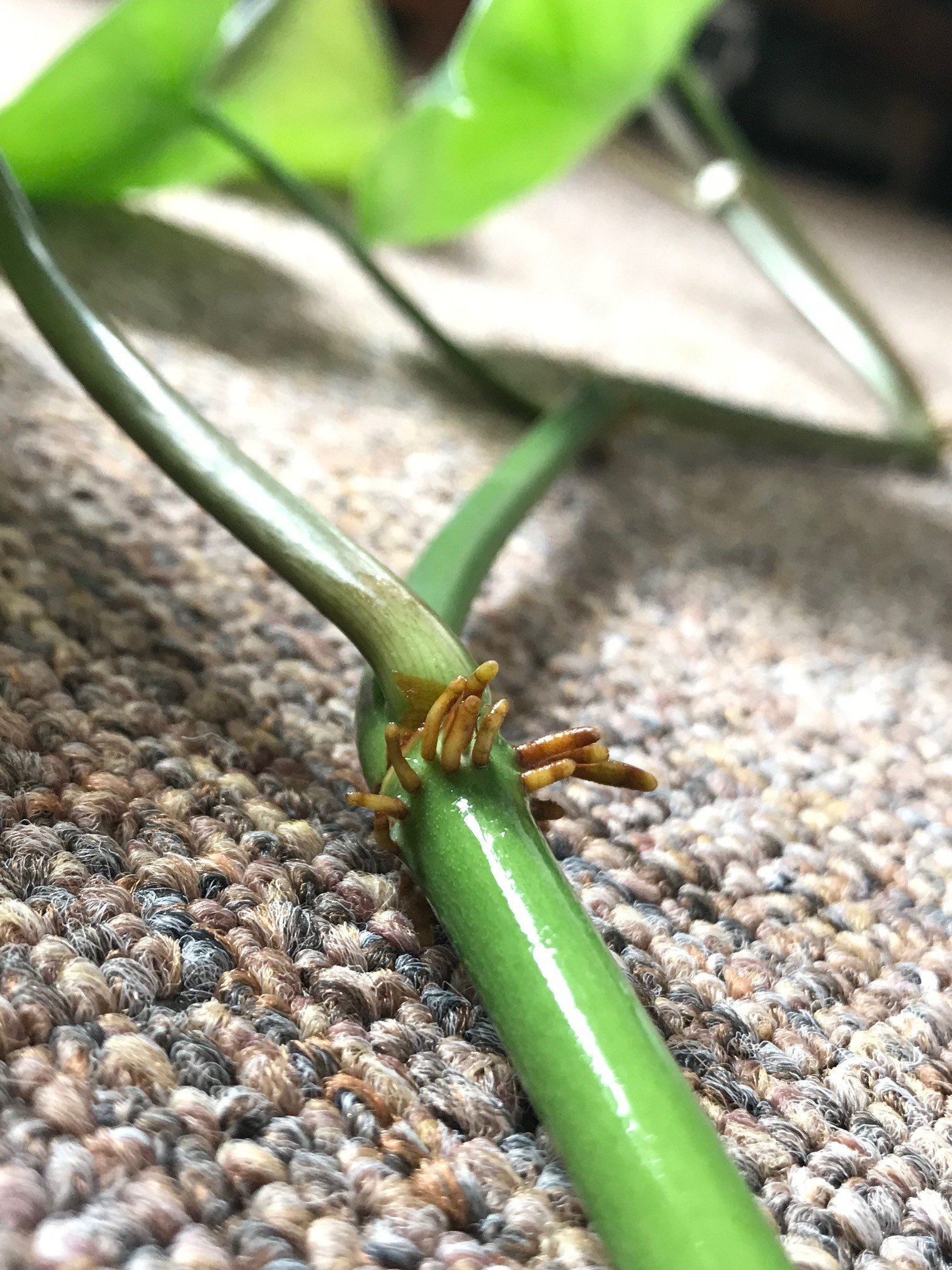 Nodes - Adventitious roots that'll develop below the nodal junction, to anchor the plant to its host. This is where the cutting will root from. 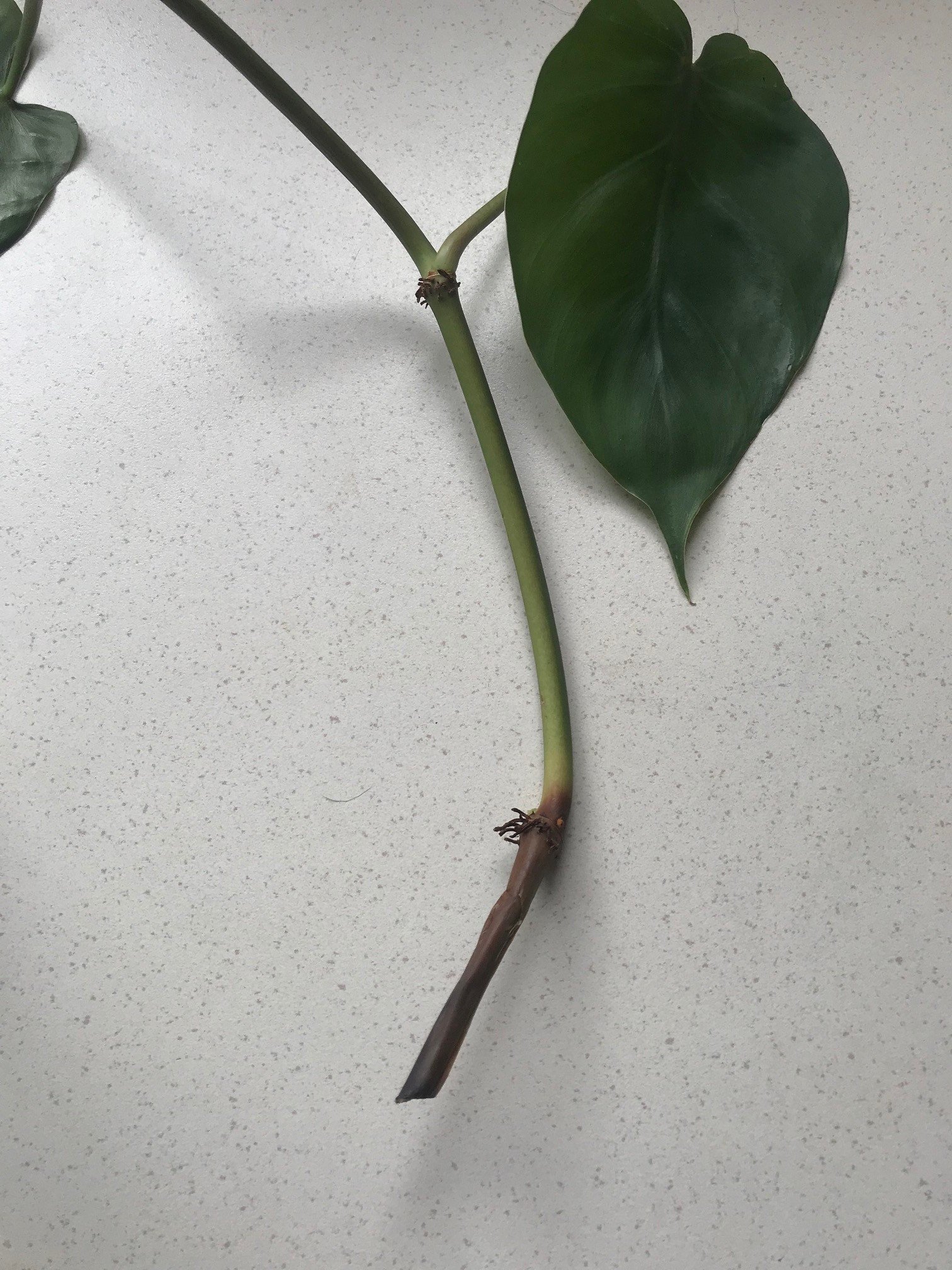 Blackleg is a common disease during propagation, typically caused by poor water hygiene.

As Philodendrons are part of the Araceae family, they'll produce toxic flowers that can be boiled and ate once ripe. Despite its readiness to flower in the wild, those grown domestically will rarely flower.

Keep an eye out for mealybugs, spider mites, scale & thrips that'll locate themselves in the cubbyholes and undersides of the leaves. Typical diseases associated with Philodendrons are leaf-spot disease, botrytis & root rot; click here for more information about how to identify and address any of these issues.