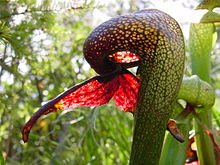 Many people will have a vague idea of how the mechanics of the plant works; however, the science behind this is far more enjoyable. The sole reason in which the plant catches prey is to do with the lack of chemicals like nitrogen and phosphorus in the soil. Evolution has presented them with ability to secrete digestive enzymes that are triggered once the trichomes of the traps, pads or hollow tubes, sense prey is near. The insect is lured into the deadly traps or pads via scents of nectar, or possible bright colours that mimic flowers or fruits. All what is left, is the exoskeleton that once belonged to a curious creature.

Situate either outside in a shaded area, or by a bright window to receive a few hours of off-peak sunlight per day. Those grown in too bright locations will cause stunted growth, brown leaf edges and burnt leaves. Never offer any carnivorous plant a spot that would be difficult to read a newspaper from, due to the heightened chance of moisture-related diseases caused by continual moist compost.

Moist compost is mandatory at all times; monitor those grown in sunny locations or outside every day to avoid drying soil. Pure rainwater is the only option long term, as any other alternative will contain certain chemicals that will slowly damage the roots. During spring and summer, maintain evenly moist compost and irrigate using the bottom-up method via submersion. Although watering from the top won't kill the plant, it could lead to botrytis due to high moisture levels of both the soil and surrounding air. During the colder months, never allow it to sit in standing water 24/7 as this is to replicate its much-needed dormancy period - Pinguicula is the only exception and should be kept in around 2.5cm (1 inch) of water continuously. Under-watering symptoms include stunted growth, brown leaf edges or rapidly declining crispy leaves, commonly caused by forgetfulness or too much sunlight or heat. Over-watering symptoms are a rotting crown and yellow/brown lower leaves which are usually typical for plants grown in too dark locations.

As most carnivorous plants' natural habitat are in boggy climates or jungles, humidity needs to be at the forefront. Although moist soil will provide some surrounding moisture, be sure to finely mist once or twice a week to increase this. Introduce a humidity tray of some description to maintain a stable level of air moisture. Be careful of the possibility of over-misting, as this will lead to powdery mildew or even botrytis if light and air circulation are poor.

Many people panic over what to feed their carnivorous plant. Natural prey like spiders, flies, mosquitoes, even slugs, and other small insects are the only food that it should digest. Never feed it cake, meat or stones as this will kill the individual trap or even spell the end of the plant's life. Dead insects should be avoided too as the trichomes can detect whether or not there's something inside it, and if the prey doesn’t move, the trap won’t digest it. Never allow it to swallow something bigger than one-third of the trap's size as the plant won't be able to digest it fully, wasting vital energy in the process. 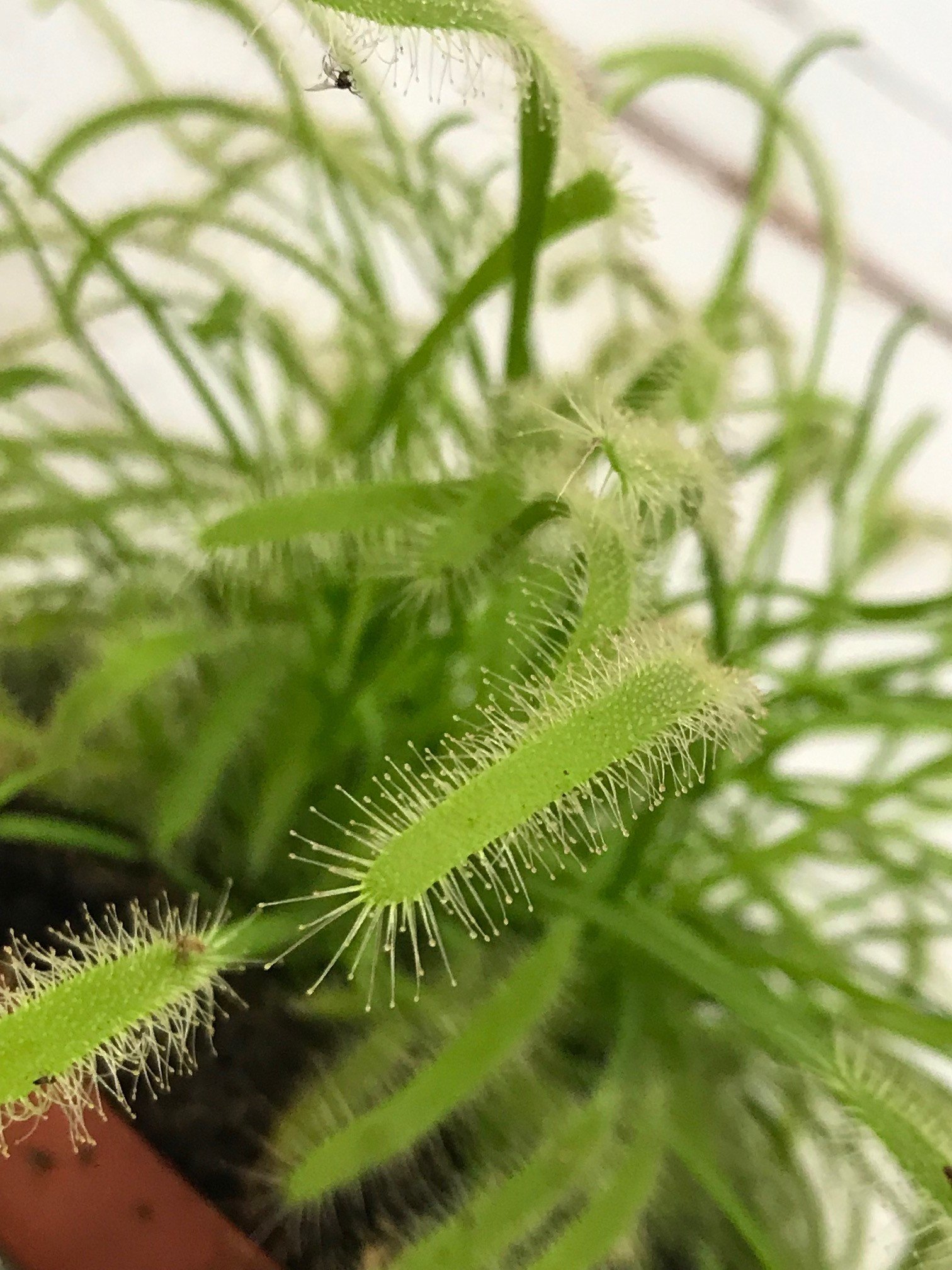 Drosera Capensis; the name, drosos, derives from Greek meaning 'dewdrops' which refers to the shape of the leaves.

The final element for a long-lasting carnivorous plant is a vital resting period during the autumn and winter months. While keeping the soil moist, reduce insect-feeds to almost none, as in the wild airborne prey tend to be less in numbers during this time. Reduce the ambient temperature to around 12℃  (54℉)  during the night to reinforce this critical period - even a cool windowsill will be sufficient enough. If its dormancy is served well, you'll be rewarded with a flurry of juvenile growth towards the start of spring season.

Too little light accompanied by water-logging will cause the lower leaves to rapidly yellow and rot. Although this is the natural response to ageing on a smaller extent, persistent yellowing and a near absence of foliage should only occur during late autumn. If this is the case during the height of summer, action must be taken immediately. Place the traps in a location that receives little direct sunlight out of peak hours, or outside if possible. Although it will take several weeks for the plant to start to recover, better-growing conditions with the occasional insects will significantly benefit it, thus resulting with a much happier plant.

Green Aphids can wreak havoc with younger specimens if untreated. The neon-green critters will predominantly inhabit the flowers and stalks, leaving white casings on the foliage below. Initially, the plant won't show any signs of pest-damage; but after a while, small white shells will appear around the base of the plant, thus signalling the start of an infestation. For its eradication, spray garlic water onto the affected areas several times over the week's course. If the population's numbers won't reduce, repeat weekly or move onto chemical pesticide - remember to keep the plant away from other unaffected specimens to avoid it spreading.

Under-developed traps are commonly caused by persistent under-watering or too much sunlight. Dry soil must be avoided at all times for success as they grow naturally in bog climates. After a few weeks of moist soil, better growth should start to develop. 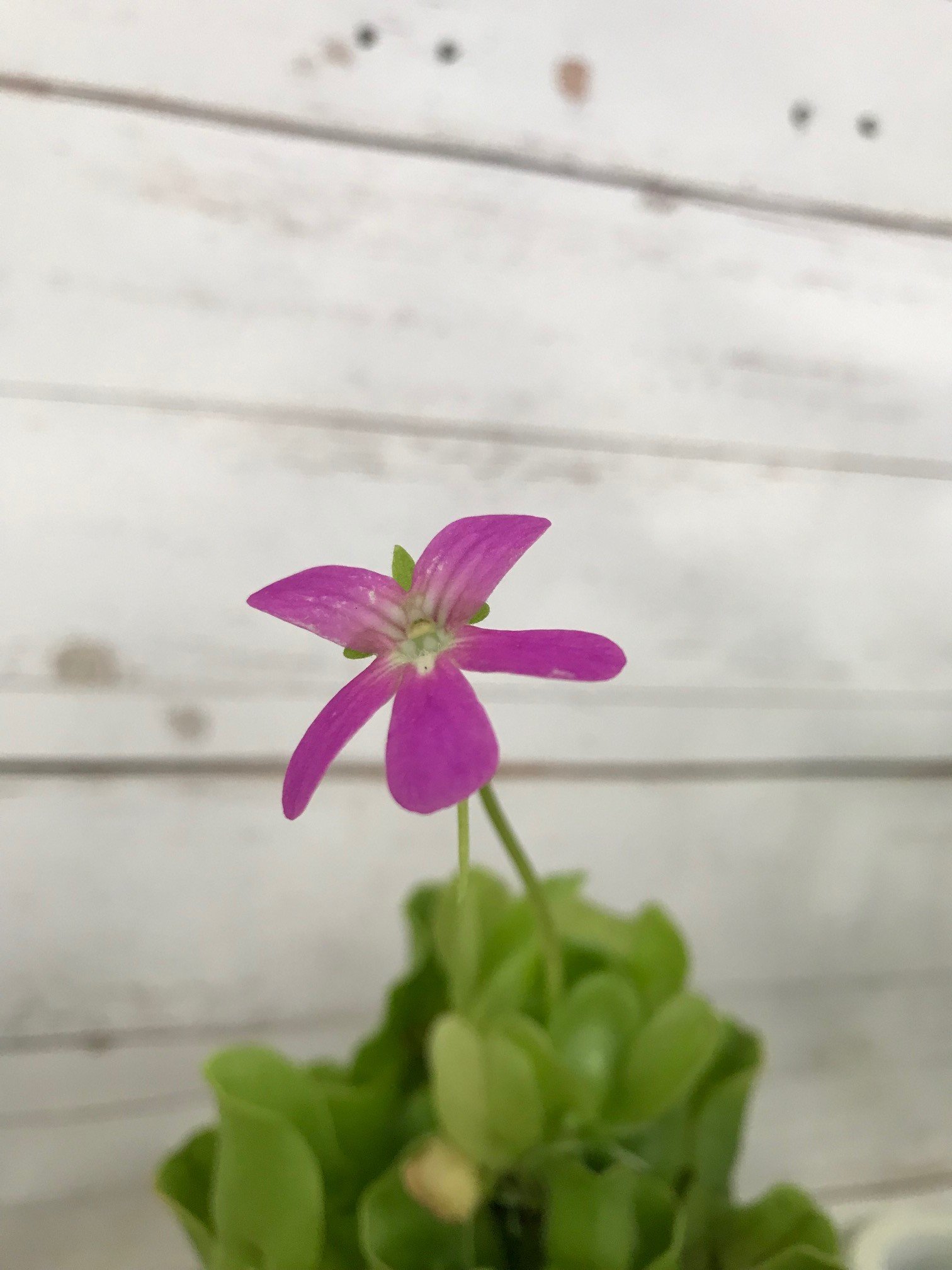 The flower of a Pinguicula in full bloom.

12° - 38°C   (54 - 100°F)
H1b  (Hardiness Zone 12)  - Can be grown outdoors during the summer in a sheltered location with temperatures above 12℃  (54℉),  but is fine to remain indoors, too. If you decide to bring this plant outdoors, don't allow it to endure any direct sunlight as it may result in sun-scorch and dehydration. Regularly keep an eye out for pests, especially when re-introducing it back indoors.

Drosera - 0.5m in both height and width. Maturity is reached within 2 years.

Darlingtonia - 0.5m in height, and 0.4m in width. Maturity is reached within 3 years. 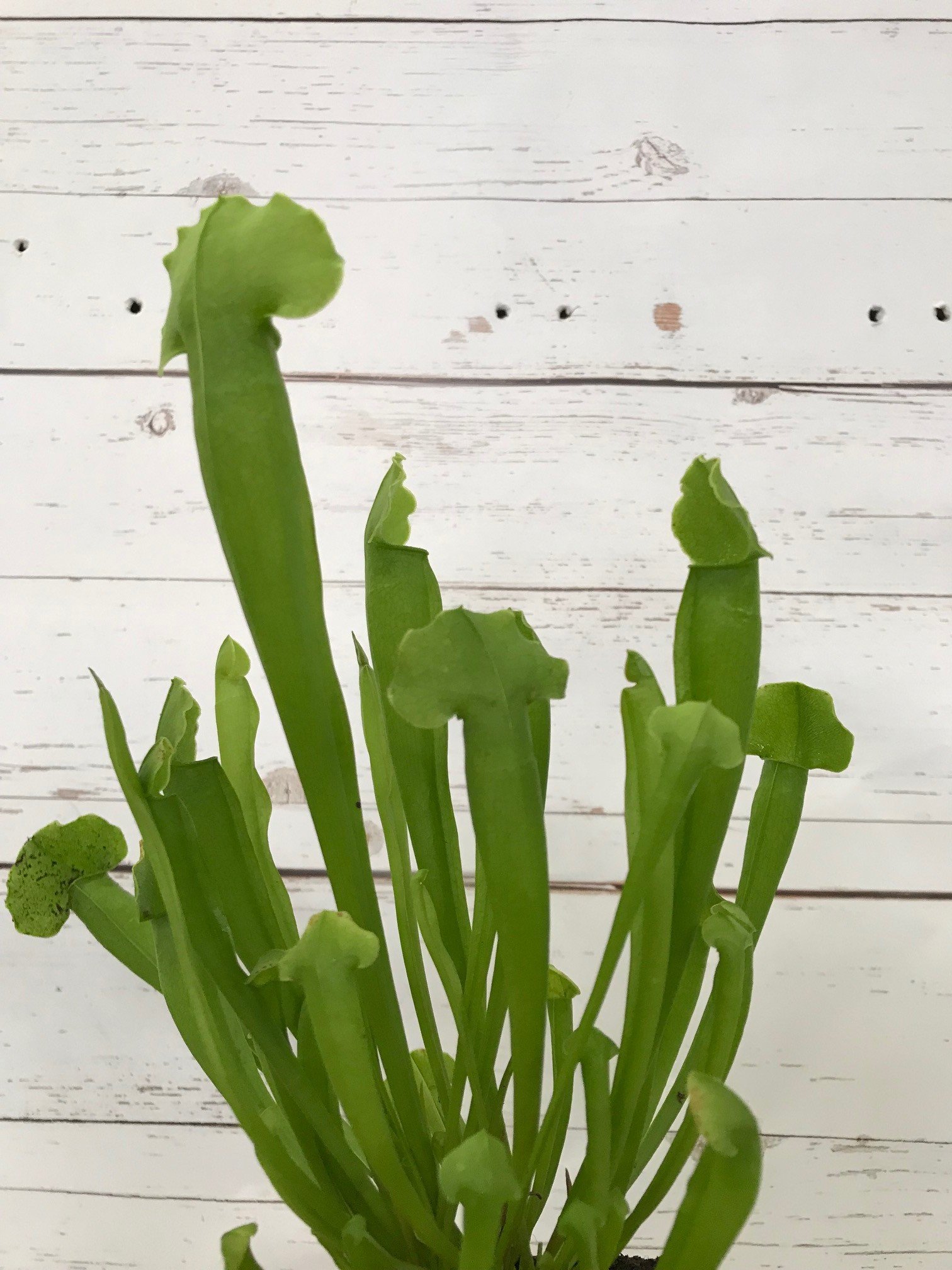 The foliage of a Sarracenia flava which has downwards pointing hairs which will cause the prey to fall into the pit of enzymes.

Division (Easy) - The best time to divide is during the repotting period in the spring or summer. For the prevention of transplant shock (common with heavy-handed transplants), water the plant 24hrs before the main event. Gently tease away some of the soil, separating a lateral offset that is half of the mother plant's size, with healthy root systems. Do not touch, or over-finger the roots as the small hairs are very sensitive and may cause death in some instances. Place the plantlet into a moist 'Carnivorous Compost' and avoid direct sunlight with prolonged droughts for best results.

Stem Cuttings (Difficult) can be taken at the start of spring when there's more than 10cm (4 inches) of semi-wooded stem. This will take a while, as the plant will need to reach a certain level of maturity before its base becomes ready. While using clean secateurs, remove the top 10cm of the stem just above a node and gently remove the lower leaves. Place the bottom half of the specimen into 'Carnivorous Compost' and be sure not to submerge the leaves. Wrap the plant (& its pot) in a transparent bag to maintain high humidity due to the absence of roots that'll result in rapid moisture loss within the stem. Provide a bright, indirect location with continual soil moisture to quicken the rate of root development. Remove the bag after four weeks of substantial foliar growth and follow the care advice provided at the top of the article.

Repot every few years using 'Carnivorous Compost' and the next sized up pot; never use any other compost as the chemicals found in these soils will burn the roots.

Keep an eye out for mealybugs, aphids, spider mites, scale, thrips, whitefly, blackfly, vine weevils & root mealybugs that'll locate themselves in the cubbyholes and undersides of the leaves, with the exception of the latter two in the soil. Common diseases associated with Carnivorous Plants are root rot, leaf-spot disease, botrytis, rust, powdery mildew & southern blight - click here to learn more about these issues.