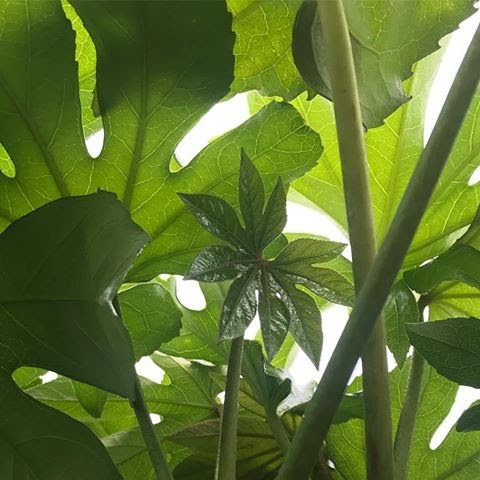 A whole host of different light levels can be tolerated; however, overexposure to the sunlight should not occur. Spindly growth is the result of too little light, whereas pale, washed-out leaves are the opposite. A Fatsia kept in a bright position must be monitored for dry soil as browning leaves, or deformed juvenile growth are crucial signs of too much sunlight.

In terms of the ideal location, a few metres within a window, or with overhead lighting is best. You must avoid situations where a newspaper can't be read due to the heightened chance of over-watering and root rot.

During the growing period, allow the soil's top third to dry out in between waters, reducing this slightly more in the autumn and winter. If your Fatsia receives some sunlight throughout the day, be sure to keep on top of soil moisture as the combination of dehydration and sun-scorch will result in brown distorted growth. Under-watering symptoms include the leaf edges turning brown, distorted growth and pale or spotty foliage; these issues are commonly due to one of three main reasons; too much sunlight, a much needed repot or forgetfulness. Over-watering symptoms include yellowing or browning stem, yellowing lower leaves and wilting. Never let your Fatsia sit in standing water, and alternatively don't water until around a third of the soil dries out - especially those in darker locations.

Create a humidity tray to provide a moist and stable environment for your plant. If the surrounding saturation is too low or the heat too high, its foliage may start to brown over and curl, especially in direct sunlight. Hose the foliage down from time to time to hydrate the leaves and keep the dust levels down.

Supplement once a month using a houseplant-labelled fertiliser, reducing this to every six weeks in the autumn and winter. Try not to over-feed a Fatsia, as their roots are susceptible to burning, especially when excess fertiliser salts accumulate in the soil. 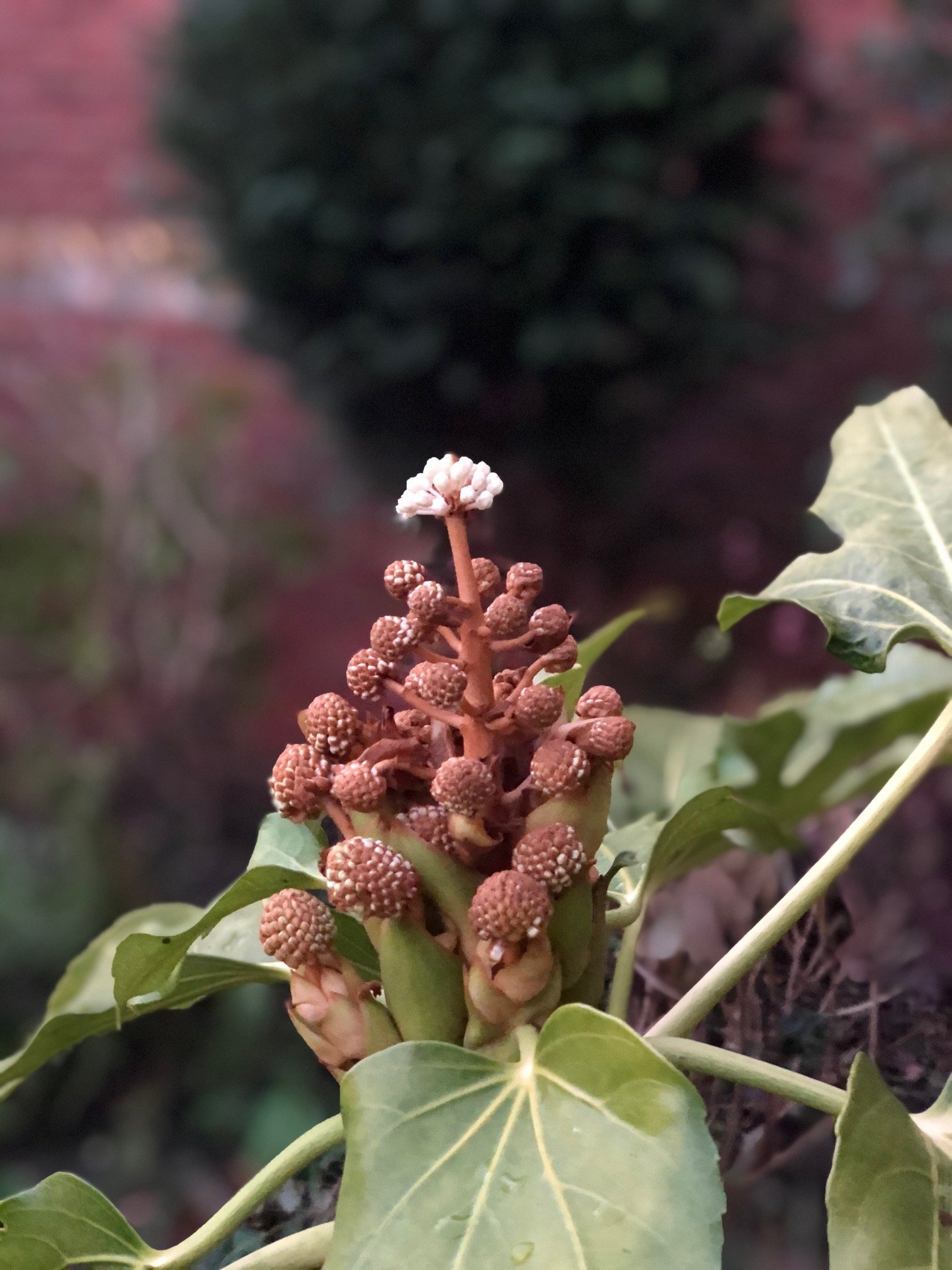 The fluorescences of an F. japonica.

Inconsistent watering which involves droughts and prolonged water-logging will not be accepted by a Fatsia, resulting in root rot, foliage decline and stunted growth. For those that are grown in brightly lit spots, only allow a third of the soil to dry out in between waterings, with darker locations allowing over half. If you're a forgetful gardener, set up a watering-rota so that it prompts you to re-hydrate efficiently.

Root rot is a common issue among specimens sat in too dark environments with prolonged soil moisture. Symptoms include rapidly yellowing leaves, mouldy soil, stunted growth and a rotten brown base. Take the plant out of the pot and inspect health below the soil line. If the roots sport a yellow tinge, you're good to go, but if they're brown and mushy, action must be taken immediately. More information about addressing root rot can be found on this link.

Lower leaf loss is a common and significant issue among gardeners. This unfortunate phenomenon could be a product of several different problems, most notably being dark locations, water-related abuse or environmental shock. Introduce the plant to a more well-lit area with a splash of off-peak sunlight; if caught in time, the leaf loss should stop within a week. If you feel that you're watering habits aren't up to scratch, familiarise yourself with our care tips provided at the top of this article. It's always best to under-water this species than over-do it, purely on its poor ability to endure continued sogginess. The final culprit could be down to a sudden relocation; if you've recently purchased the specimen, the chances are it is still acclimatising to the new environment. Although this shouldn't happen, a vastly different setting will cause sudden foliage loss and stunted growth. You'll have two options of either waiting it out or presenting a more Fatsia-friendly environment, mentioned in the 'Location & Light' section. For more advice regarding this matter, don't hesitate in commenting in the section below for a response.

Environmental Shock is a familiar occurrence with newly-located specimens, that usually results in stunted growth and lower leaf loss (rare). When a plant is relocated into a new, unfamiliar setting, the effects can be catastrophic. The humidity, temperature and light levels will all suddenly shift into different proportions, inflicting great stress the individual. There are two options of addressing this issue; either wait it out or relocate it into a more Fatsia-friendly environment. As long as the specimen appears healthy with little change to its pre-existing leaves, new nodular growth should emerge in the following months.

Brown crispy new-growth that's become deformed is the product of over-exposure to the sun and dehydration. As mentioned previously, Fatsia will grow best in bright, indirect light with regular waters. Remove the affected leaf and improve the growing conditions to counteract this issue occurring again. In some cases, Spider Mite could be the culprit for the abnormality, with small, near-transparent critters slowly extracting the chlorophyll out of the leaves. Have a check under the rest of the foliage, most notably along the midrib, for small webs and gritty yellow bumps. Click here to read our article about the eradicating Spider Mite, along with some extra tips that you may not find elsewhere!

The species was first described under the name of 'Aralia japonica' by Carl Peter Thunberg in 1780, before being reclassified by Planchon in 1854. The kept the species name, 'Japonica', as a nod to Thunberg's previous works, but replaced it in the newly-constructed Fatsia genus. The latter can be translated from the Japanese word for 'eight', which refers to the number of lobes on a matured leaf. 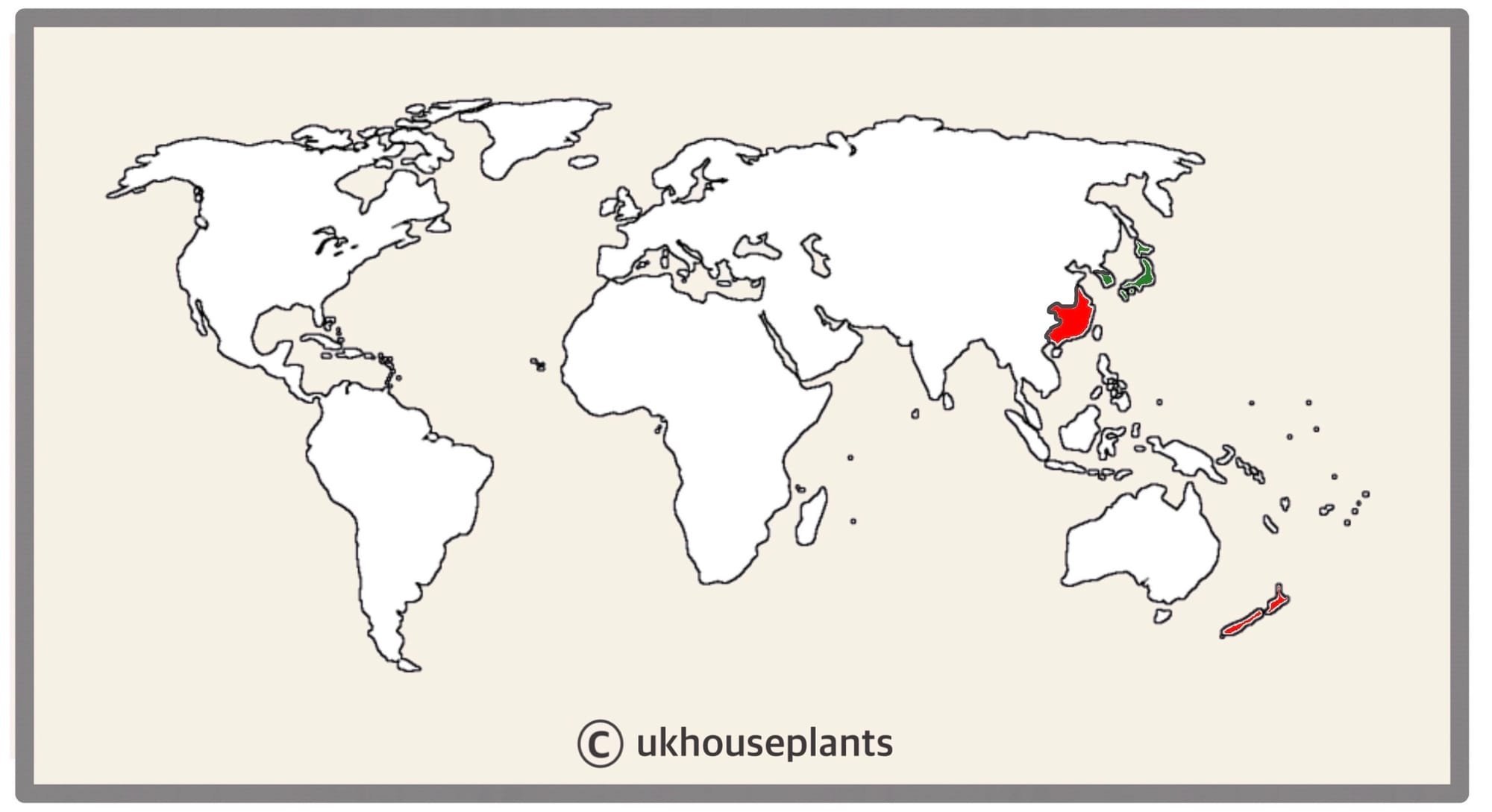 The Distribution of Fatsia japonica in Green  &  artificial introduction in Red.

Up to 2m in height and over 1m in width. The ultimate height will take between 5 - 10 years to achieve indoors, with several new leaves put-out each season.

Stem & Eye Cuttings (Moderate) - This method of propagation is troublesome without the aid of bottom-heat and a controlled environment. Choose the healthiest, most established stems that are wooded, yet still juvenile enough to bend slightly, being just thicker than a pencil. Each cutting should only have ONE leaf, and a small portion of the stem to either side of the node. Cut directly below a node using a clean knife to reduce bacteria count. Situate the cutting into moist houseplant compost, with the only the leaf sticking out of the soil. Blackleg can occur when the bottom wound becomes infected, resulting in propagation failure - typically caused by water-logging or a too-damaged wound. Maintain bright light and evenly moist soil with the avoidance of direct sunlight or cold draughts. Wrap the pot (& foliage) in a transparent bag or within a miniature greenhouse, and provide bottom heat of temperatures above 18°C (54°F). Remove the bag and place into individual 7cm pots once the second new leaf emerges. Follow the same care routines, as mentioned in the article's top half. This method will take up to five months, so patience and the correct environment are paramount for success! Roots should develop within the first month of propagation, pushing out at the bottom of the pot - have a look at the images below to get a grasp of what's been written. 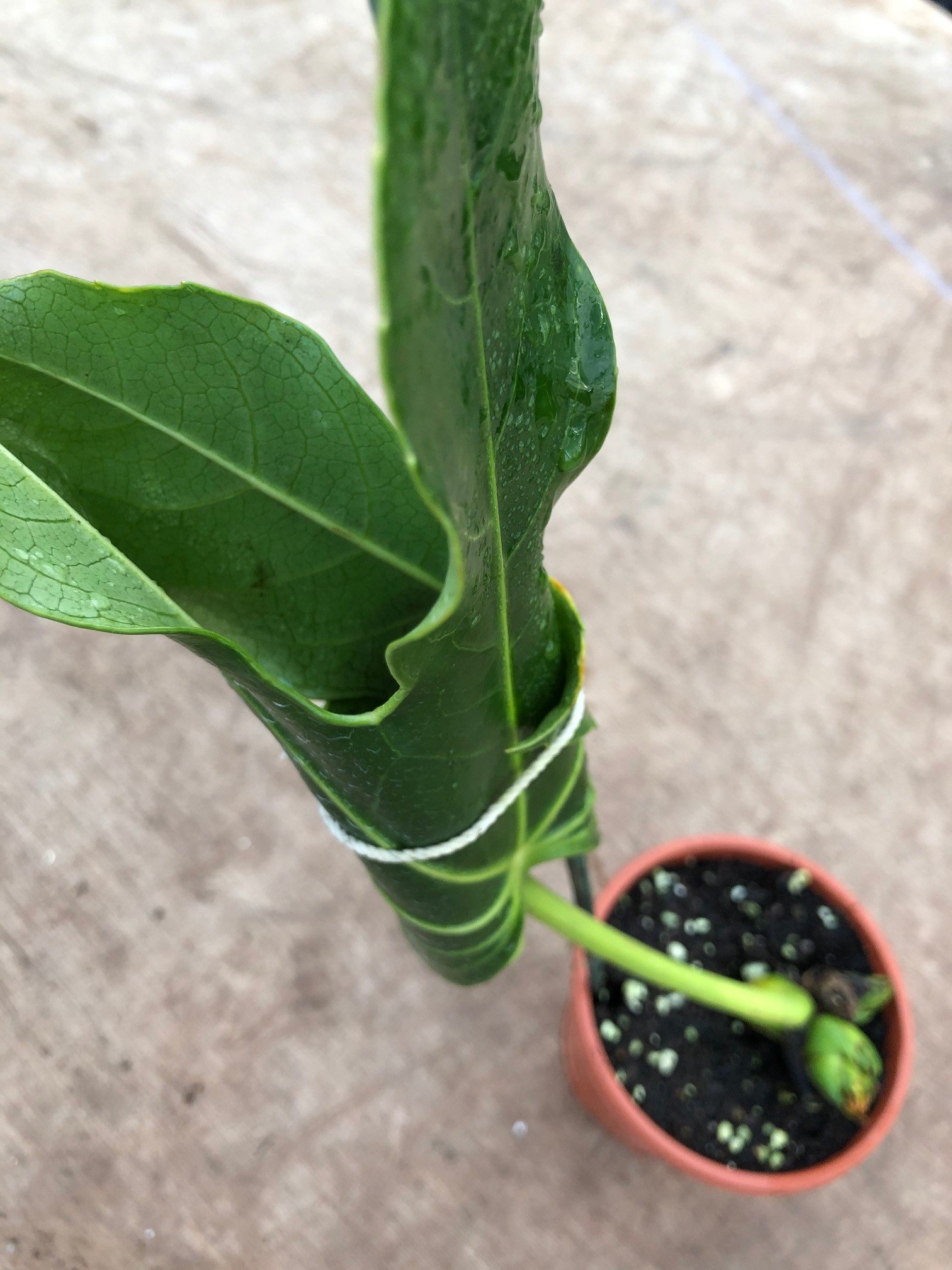 Wrap the leaf outwards around a small stick for the prevention of water-loss - this is a crucial element for its success. 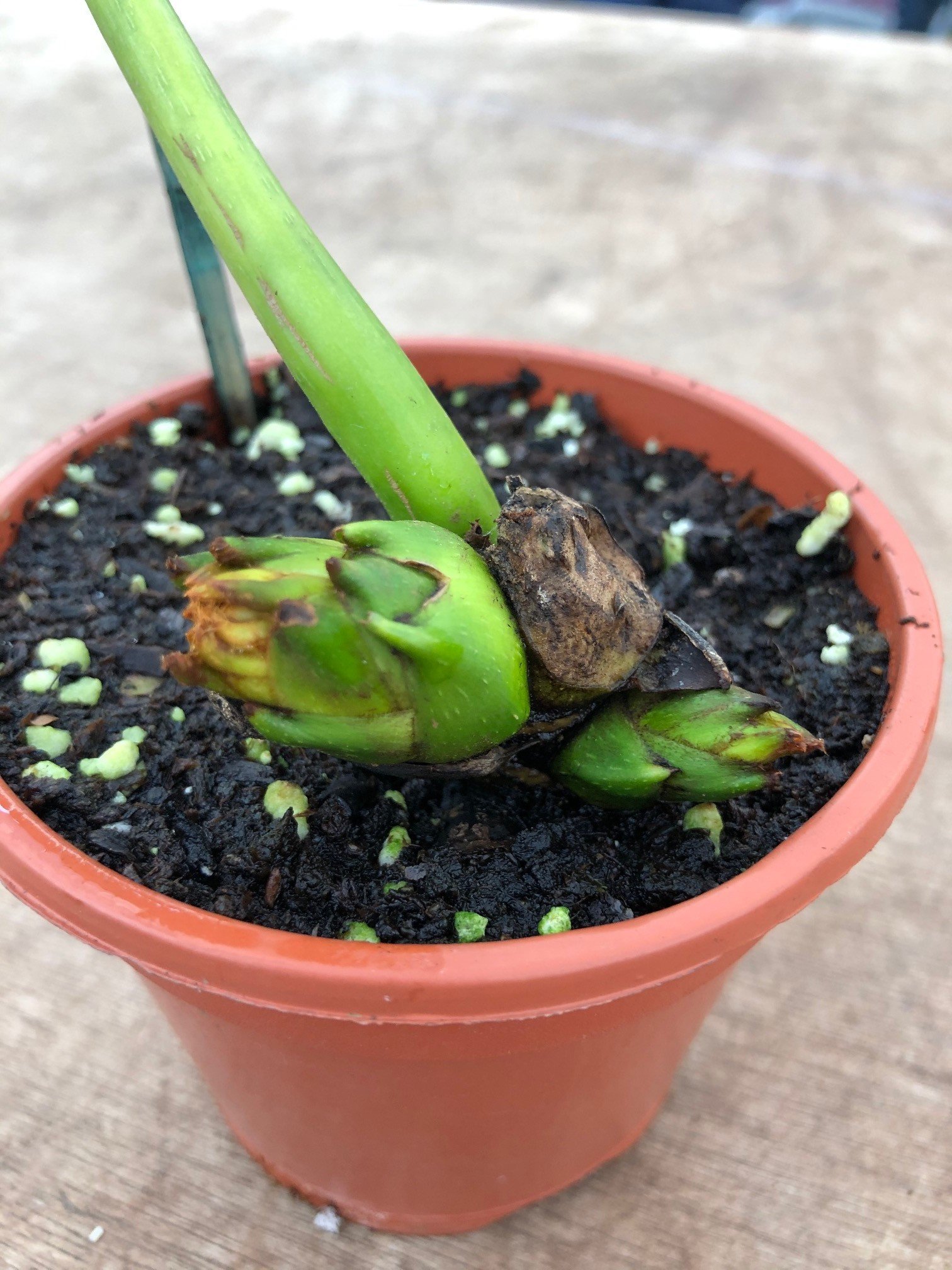 The leading growth's terminals are among the best candidates for stem cuttings. 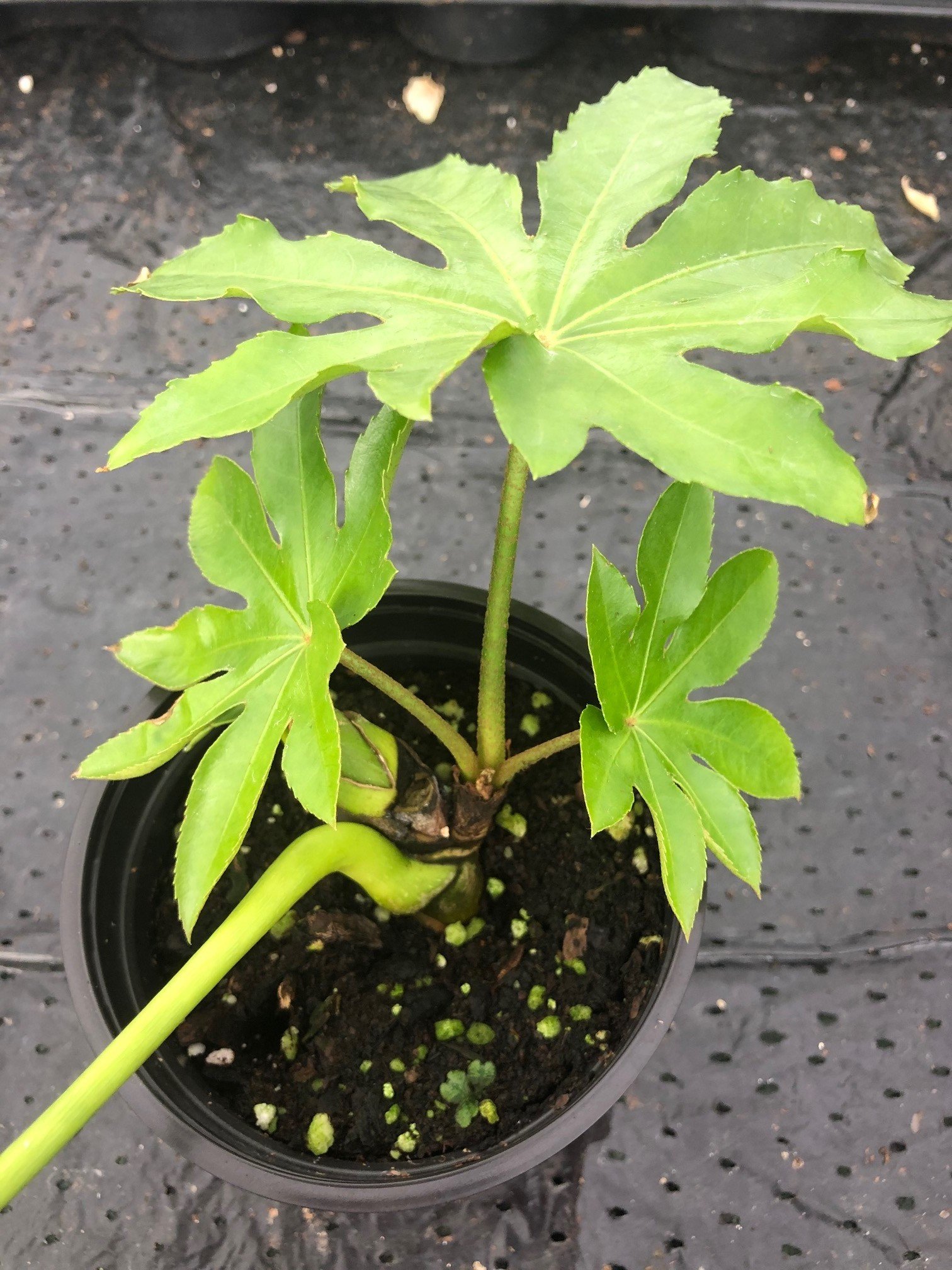 Fatsia will produce small clusters of globular white flowers during spring or summer; however, it's extremely rare to bloom indoors and therefore is otherwise grown for it's tropical attire. Have a look at the second image above to see the development of its flowers.

Repot every two years in the spring using a houseplant-labelled compost and the next sized pot with adequate drainage. Hydrate the plant 24hrs before the tinkering with the roots to prevent the risk of transplant shock. For those that are situated in a darker location, add a thin layer of small grit in the pot's base to improve drainage and downplay over-watering. Click here for a detailed step-by-step guide on transplantation, or via this link to learn about repotting with root rot.

Keep an eye out for mealybugs, spider mite, scale, thrips & whitefly that'll locate themselves in the cubbyholes and undersides of the leaves. Common diseases are root rot, leaf-spot disease, botrytis, powdery mildew & southern blight - click here to learn more about these issues.

Blue Diamond,  British Garden Centres,  Dobbies,  Online Stores. Most Fatsia japonica are usually sold outside during summer at most garden centres; you can bring them indoors as long as they're checked for pests and diseases beforehand.

If you need further advice with indoor gardening, never hesitate to send us a message or leave a comment in the section below.