During the growing period, thoroughly water the soil every ten to fourteen days, allowing the soil to dry out in between. Winterising an Echeviera is essential to maintain good health; keep the plant 'ticking over' by reducing the number of irrigations to every three weeks and avoid over-fertilisation. One word of advice is never allow excess moisture to settle either in the actual crown of the plant or underneath the pot, as both will cause southern blight or even heart rot. It's recommended to irrigate an Echeviera using the bottom-up method; place the plant into a saucer and fill until the bottom 30% is submerged. After several minutes, shake the pot gently to remove an excess moisture and place back into its original location. Under-watering symptoms include drooping leaves, stunted growth, and sunken leaves; these can be a range of different issues, including forgetfulness, too much sunlight, or the plant being pot-bound. Over-watering symptoms include root rot, a rotting base, or sudden plant death. Echeviera must receive sufficient light levels (at least one hour of direct sunlight a day) to counteract the chance of root rot. For more severe cases, hit the link below to learn about how to address root rot.

This is not a factor; however, if the Echeviera is situated indoors, a quick hose down from time to time will reduce the number of dust particles covering its leaves.

An hour of direct sunlight is a must; shady locations could lead to diseases associated with over-watering due to the lengthened time in which the soil takes to fully dry out. The frequencies of irrigations solely rely on the amount of sunlight is received; if it begins to develop a discoloured white crown, this is typically down to too little light. Newly-propagated 'pups' must not receive intense sunlight as their insufficient root systems will not soak up enough moisture to survive the harsh rays. 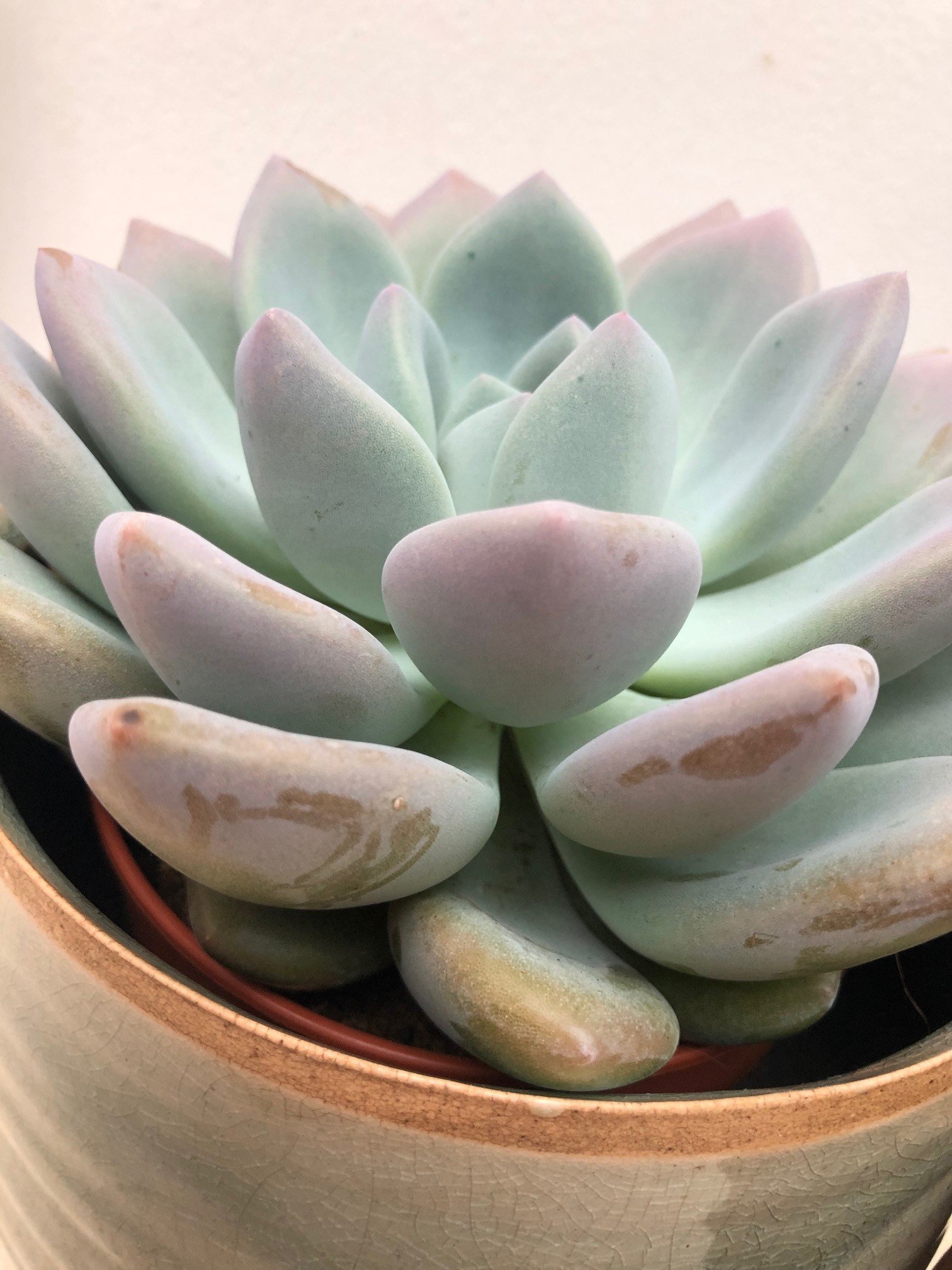 Over-watering is the biggest issue when it comes to an Echeviera. Typical signs of this include brown leaves with soft spots on the underside of the leaves, basal/crown rot or a collapsed stem. Not only will you have to be mindful of root rot, have a think about which plant parts to keep dry. The soil must have periods of droughts to replicate the habitats of semi-deserts of both Americas, as well as limiting the chance of root rot. Its central crown must remain dry at all times to prevent the development of basal rot. Avoid waterlogging; there's no point fulfilling 'drenches in between droughts' if the base of the pot is submerged, as root rot will arise. For any more information about over-watering related issues, be sure to click on this link.

A pale central crown and elongated growth are typical signs of too little light. As Echeviera originate in semi-desert locations around the Americas, replicate this by offering at least an hour of direct sunlight, as failure to do so will cause elongated growth and pale crowns. 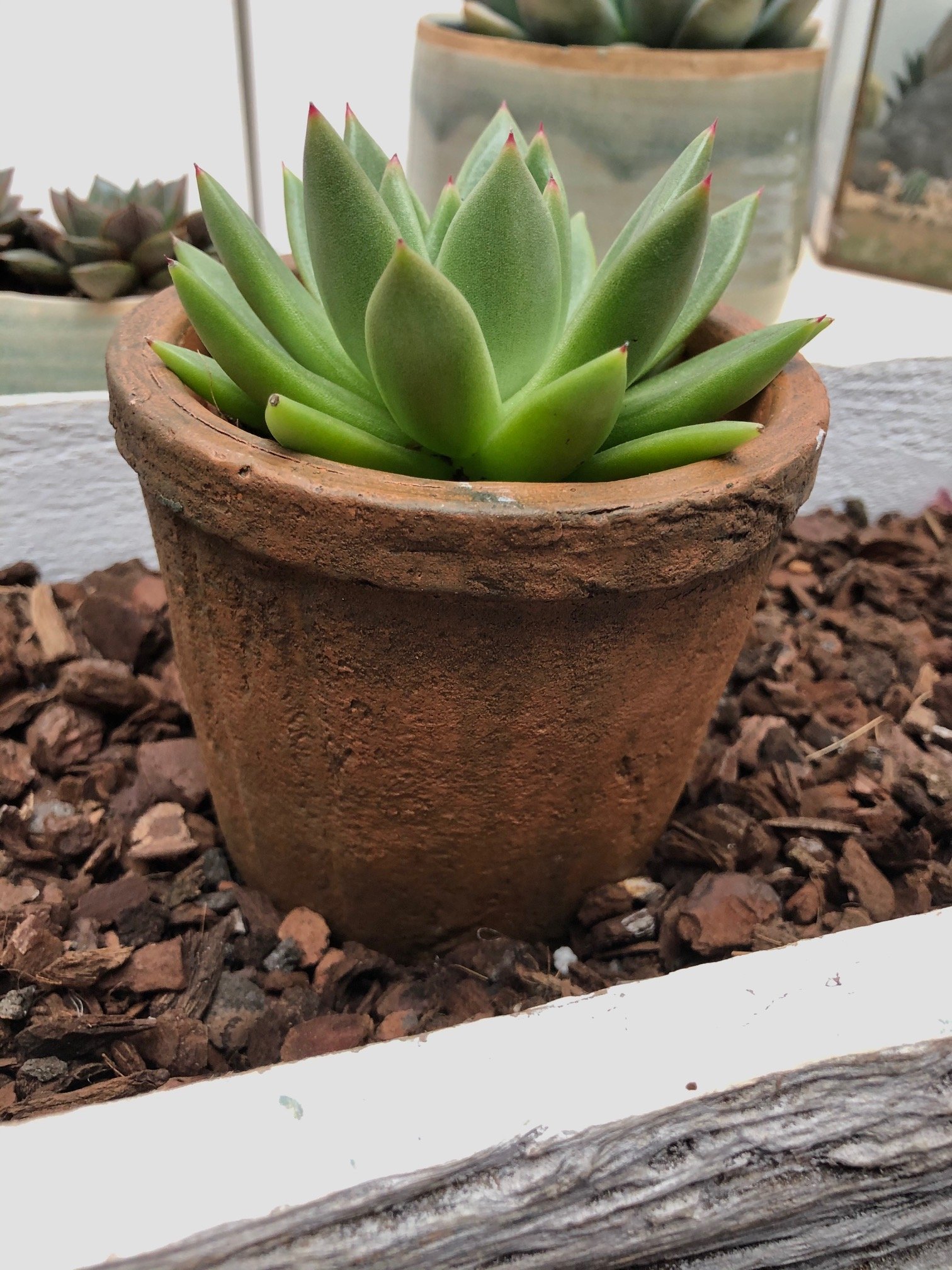 Alternatively, too much sunlight will lead to sun scorch, with typical signs including browning or crispy leaves, dry leaf-edges, sunken leaves, stunted growth and 'pup' death. Although too little light will cause over-watering issues, too much sunlight will negatively affect the plant as well. A location that offers 1 - 4hrs of sunlight a day brings the optimum growth for an Echeviera. If it has fallen short of this issue, reduce the amount of sunlight considerably and always be mindful of environmental shock (when too locations offer too different growing conditions). Remove some of the affected leaves and increase irrigations slightly.

Over-supplementing an Echeviera will bring nothing but grief in the likes of yellowing leaves and weak, dramatic growth. Although a monthly feed is an excellent way to promote healthy, vigorous growth, dry soil and sharp chemicals from the feeds will quickly lead to the burning of roots. The advice for this issue is to pre-moisten the soil beforehand; not only will this remove the chemical-edge found in fertilisers, but it will also adversely remove the chance of root burns. 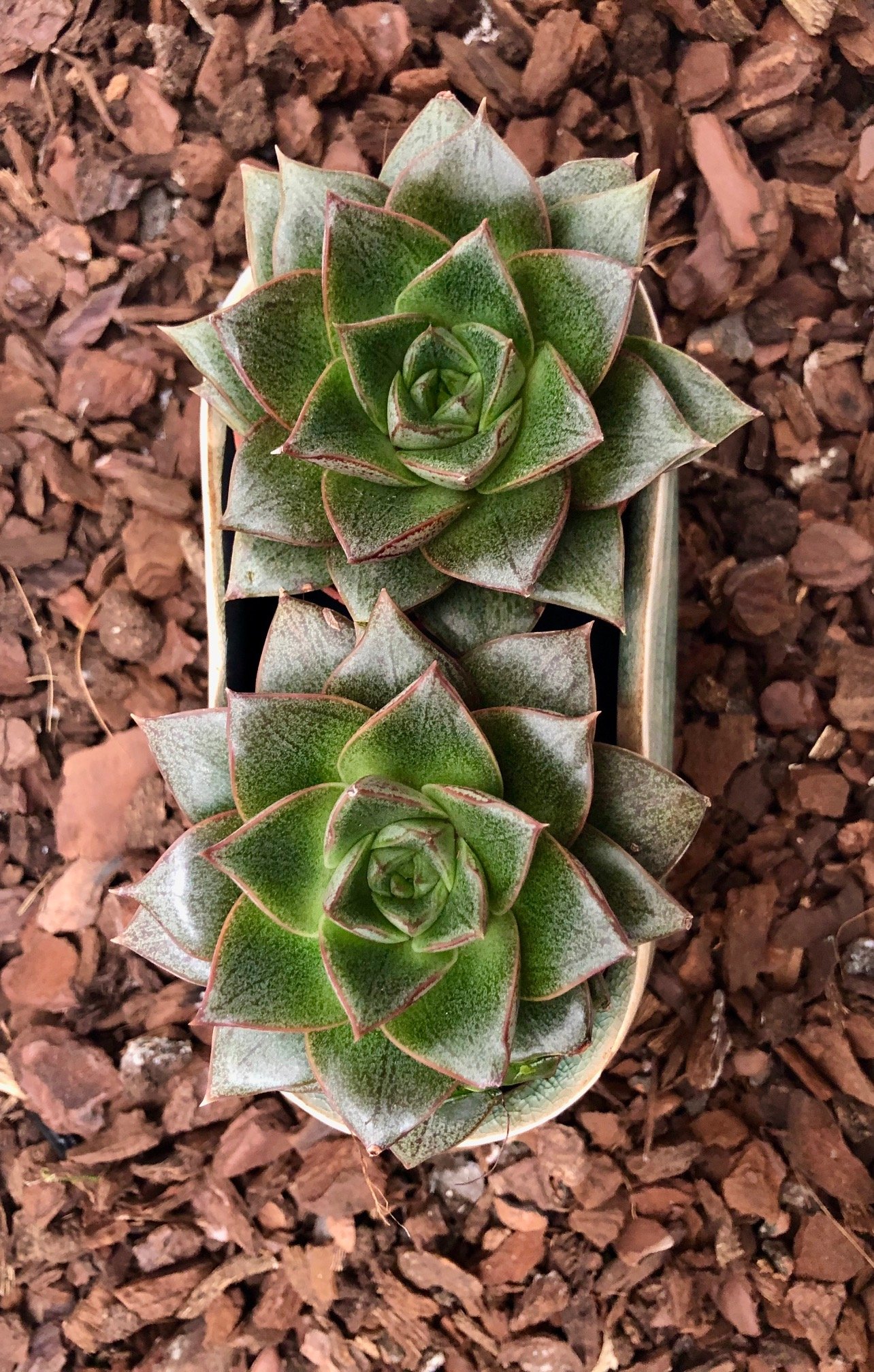 Established specimens (2yrs +) will easily bloom during the spring if its previous dormancy period has been served well in the winter. As ukhouseplants been challenged many times on this subject, we've created an acronym to help you through this process - SHORT. The combination of drying soil, cooler temperatures and dark nights will contribute to better flowers in the following season. The following steps must be taken from autumn to winter, to provide the best possible dormancy period.

Reduce the temperature by around 5℃ or place in a room which is within 12 - 15℃  (54 - 59℉).  As most houseplants are sensitive to temperature change, we can't empathise how important this is to replicate their dormancy period. If all of the steps are fulfilled, an established specimen could produce beautiful clusters of flowers in early spring, lasting several weeks.

10°C - 25°C   (50° - 78°F)
H1b - can be grown outdoors in summer in a sheltered location, but is fine to remain indoors. If you decide to bring this houseplant outdoors, do not allow it to endure more than an hour of direct sunlight a day as this will burn the leaves. Regularly keep an eye out for pests, especially when being re-introduced into the home.

Most species will reach heights of 0.4m in height and 0.8m in width. Larger specimens, like the E. gigantea can reach heights of over 0.7m in the correct environment. The ultimate height will be reached within 5 - 8 years.

Offset (Pup) Division - For this method, it's best to divide in spring or summer and once the offshoots are at least a quarter of the mother plant's size. Remove its pot and place your hand in between the junction that connect the two; soil may have to be brushed away to get a better grip. Gently push the pup downwards while supporting the mother plant until you hear a snap. Cautiously separate the root systems, keeping great care in keeping them damage-free. Place the new plantlet in a small pot with a well-draining potting mix, much similar to the original soil, and maintain the same care routines. Cacti & Succulent Compost is best, or you can make your own using multipurpose compost with extra grit, sand and perlite. Provide a bright setting with temperatures around 18°C  (64°F)  with the majority of the soil drying out in between waters. New leaves should emerge within the six weeks, as long as the soil is kept on the drier to life.

Leaf Cuttings - Leaves that are halfway along the stem have the most potential due to its size and maturity. Gently place your fingers between the mother's stem and the leaf's base, pulling it downwards until you hear a snap. Ensure the wound is wholly intact with no damage as a bruise or tear will result in unsuccessful propagation. Set the leaf ON TOP OF a bed of moist Cactus & Succulent Compost for root growth. Not only will this callous the wound (to prevent disease), but it'll also speed up the propagation process considerably. Once there's 0.3cm of root development, place it one third into the compost, at a slight angle. Provide a bright setting with temperatures around 18°C (64°F) with the majority of the soil drying out in between waters. New leaves should emerge within the next month, as long as the soil is kept on the drier to life.

Yellow flowers are held by a spike that'll develop each year, reaching up to 40cm in height. Each flower can last up to several days, with the blooming process lasting several weeks. Ensure to keep the plant sufficiently hydrated with a fortnightly feed of Cactus Feed during this time to prolong this period. Gorgeous flowers are produced in spring if a good dormancy period from the previous winter is served. Reduce temperatures to around 10°C  (50°F)  accompanied by little watering to promote the plant to enter this vital stage of the year. 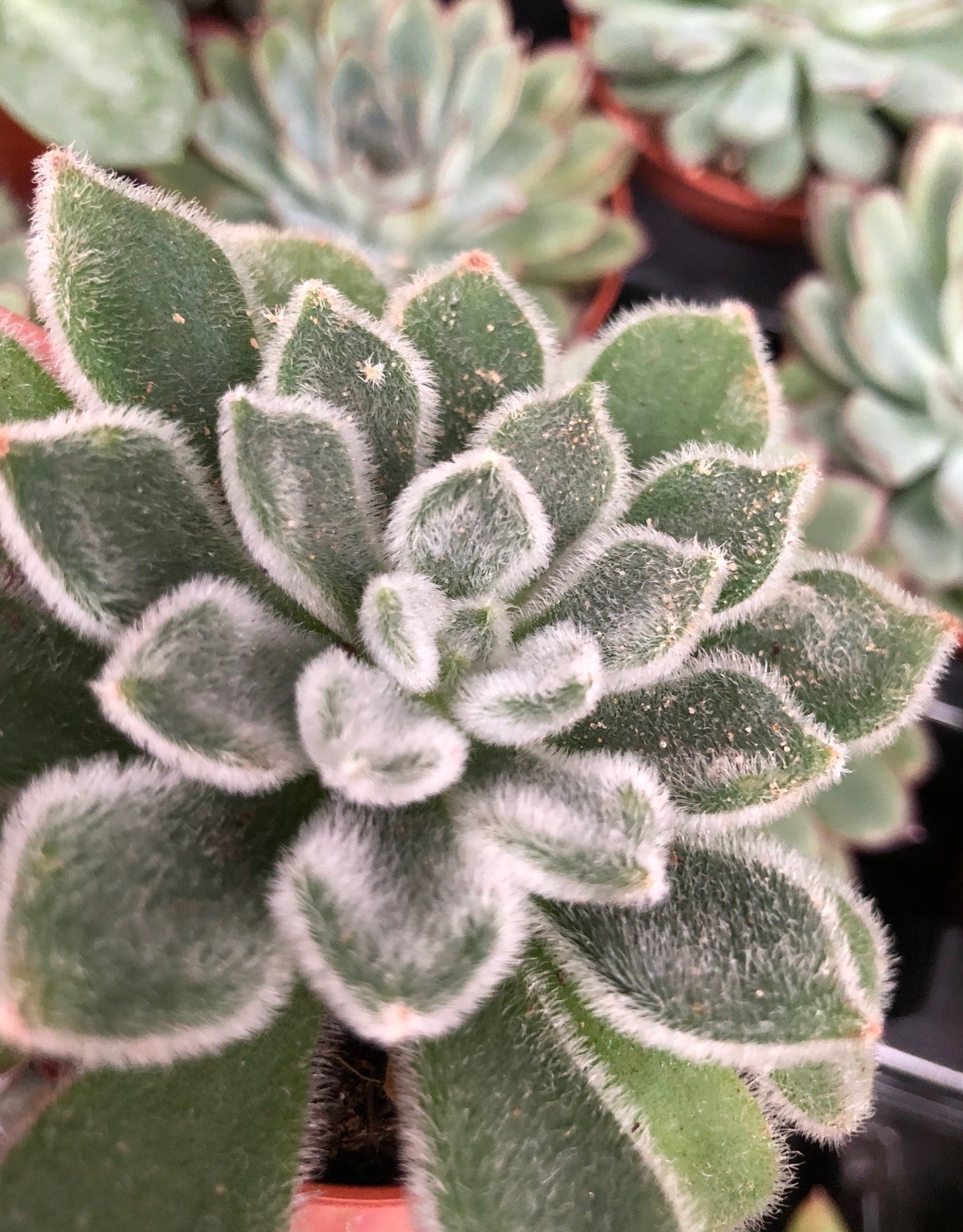 Common diseases with Echeviera are root rot, crown or heart rot, leaf-spot disease and powdery mildew. Keep an eye out for vine weevils (uncommon indoors), scale & mealybugs. Over-watering will lead to both root rot and possible plant death; for more info on how to address any of these issues, hit this link.  Identifying Common Houseplant Pests & Diseases